If you love Michigan Craft beer and enjoy the Michigan Brewers Guild festivals then you’ll appreciate these 10 things about the U.P. Beer Festival.

A side note: there were more than 50 breweries and over 400 different beers, so we couldn’t mention every beer or brewery but we have lots of pictures in our photo gallery!

Is it possible to make beer with the ingredients from a pasty: potatoes, carrots and rutabaga? 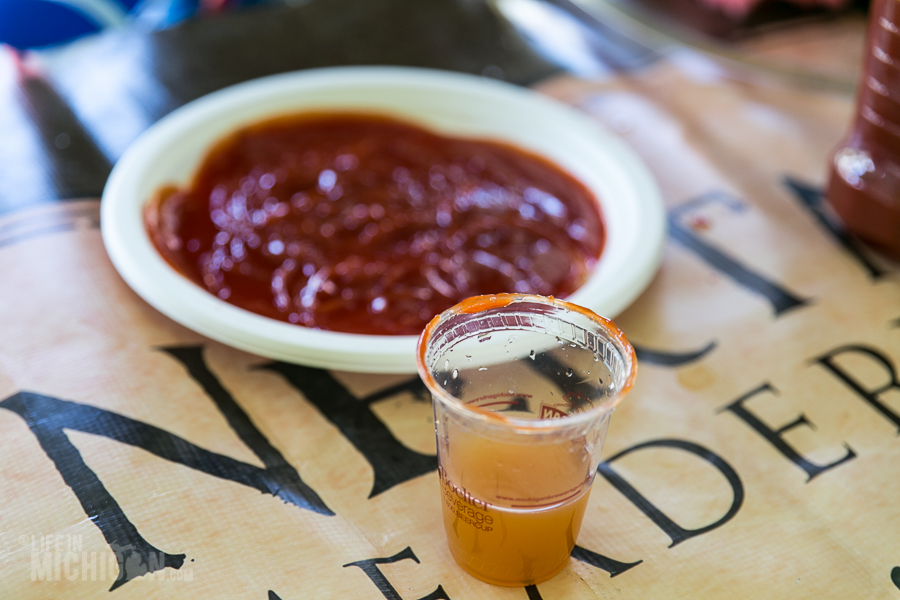 Why yes, I think it is. Troll’s Offering brewed by B. Nektar Meadery located in Ferndale, Michigan may be the first pasty beer. Only a Michigander will get the humor. I have to admit I was skeptical and politely refused to have my cup dipped in catsup. Chuck couldn’t wait and had catsup stuck under the lip of his cup for the remainder of the festival. He nodded his head after the first sip and said, “That is pretty good!” I would agree, I had a sip and it was very tasty. 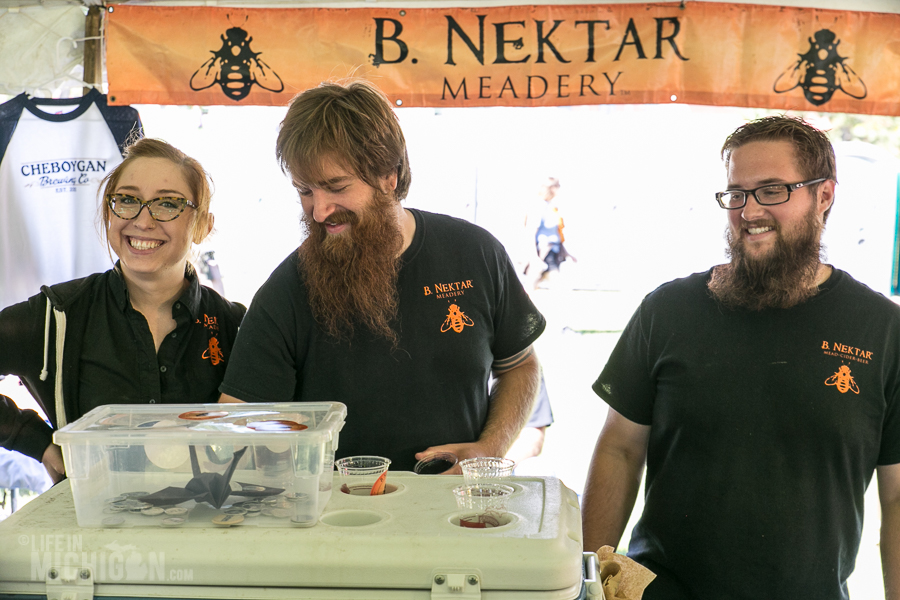 What happens when you invite Hopman and someone to pour for you who has a Dark Horse tattoo on his leg? Yep, you guessed it, chaos. It was great fun and we hope we are invited back to Kuhnhenn, although I wouldn’t blame them if we are banned. Chuck stood behind the taps yelling, “Get your Fluffer here! Who wants a Fluffer? Get your Fluffer here!” 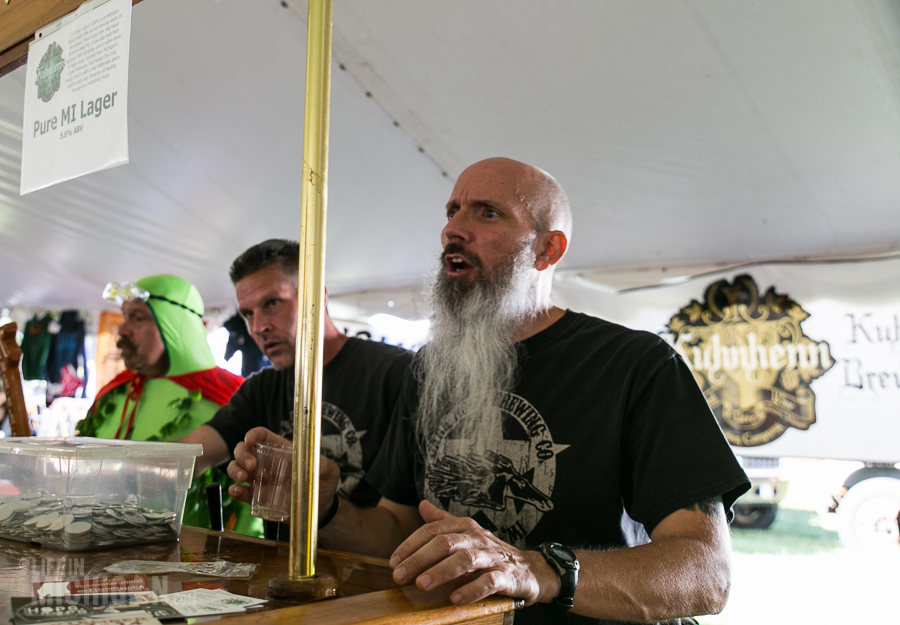 Pretty soon the crew from Dark Horse  joined us! 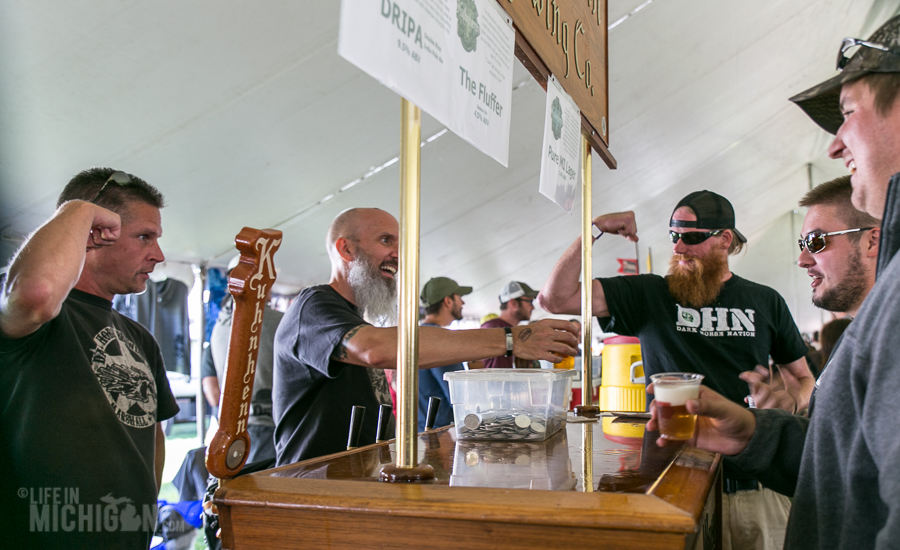 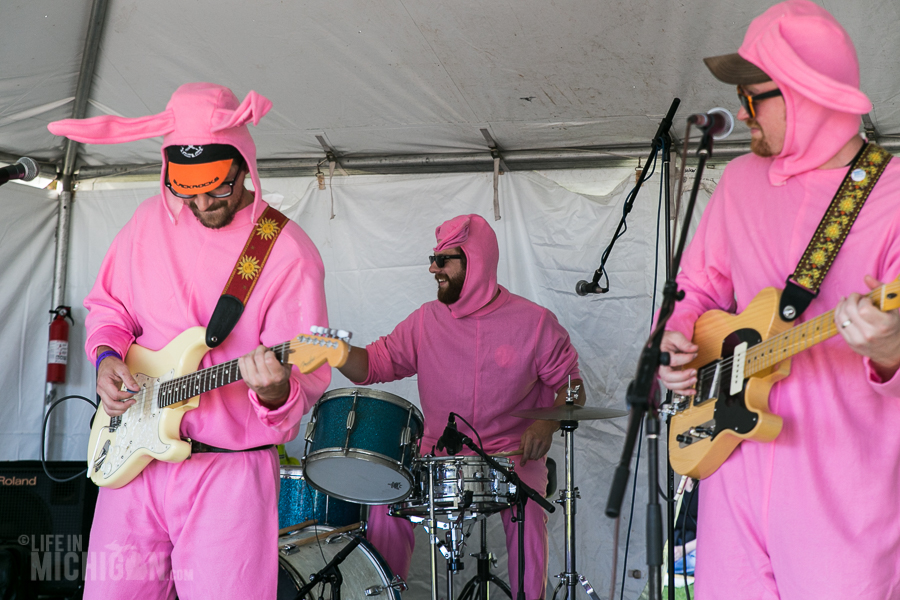 Release the Rabbits also known as the Frank and Da Beans were fantastic. They had the crowd dancing! A great selection of tunes including a cover of “Moonage Daydream” by David Bowie which drew Chuck over to jam with the band. They did a cool Doors cover too. 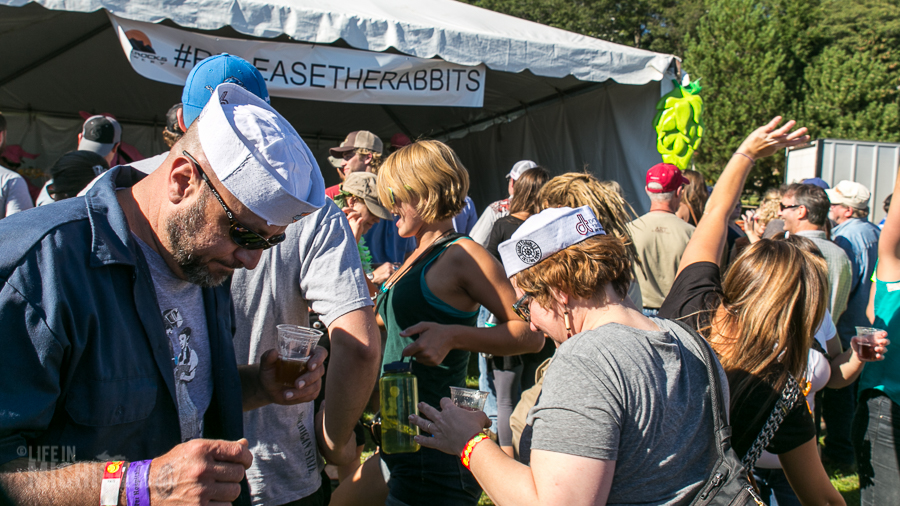 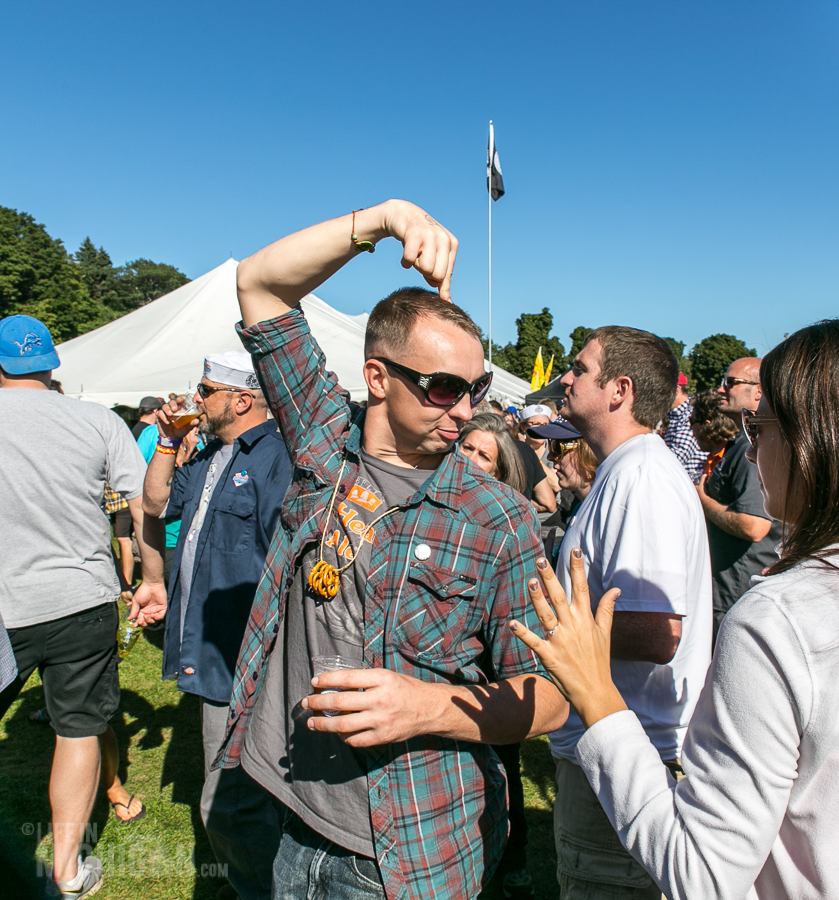 State 51 laid down a nice selection of country and classic rock tunes.  Chuck’s mom use to play “Steel Guitar rag”, so he definitely loved hearing that one. Their cover of “Peg” (or at least that is what Chuck thought they played) was great. You don’t always expect Steely Dan jamming at a beer fest. 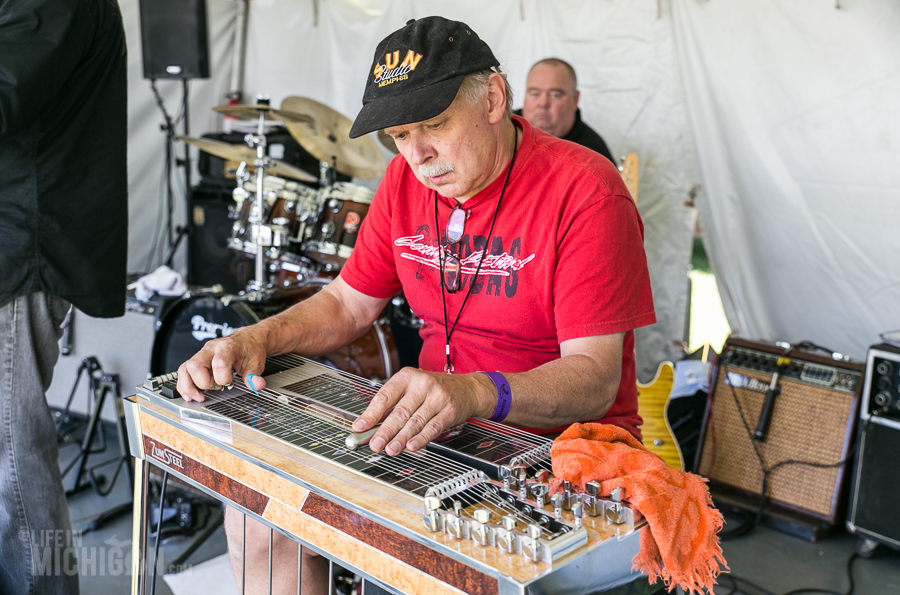 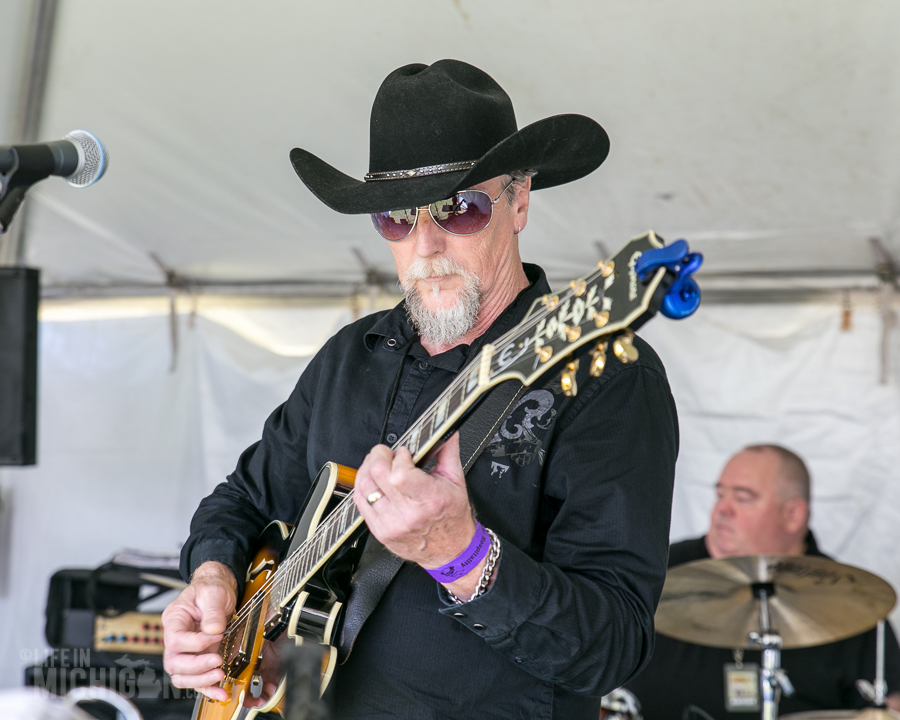 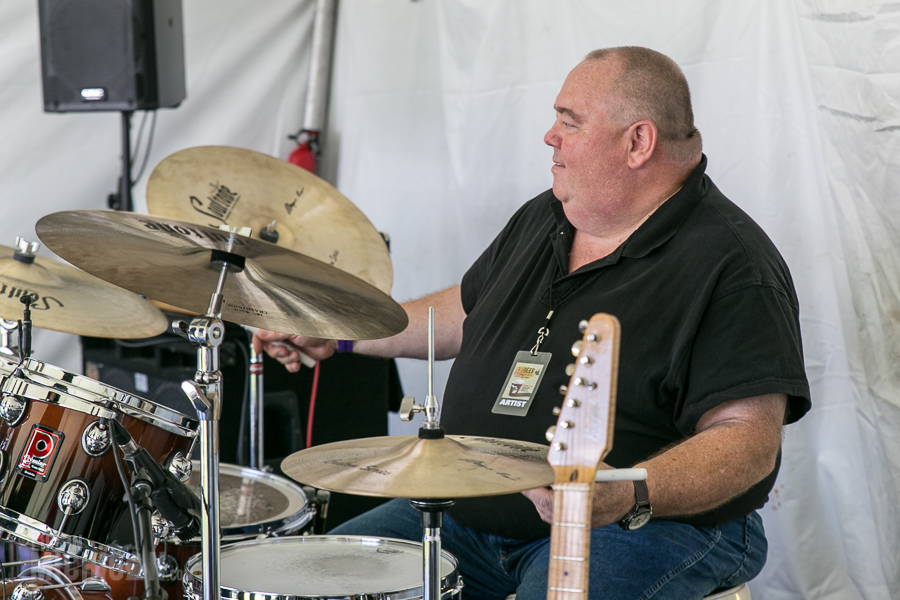 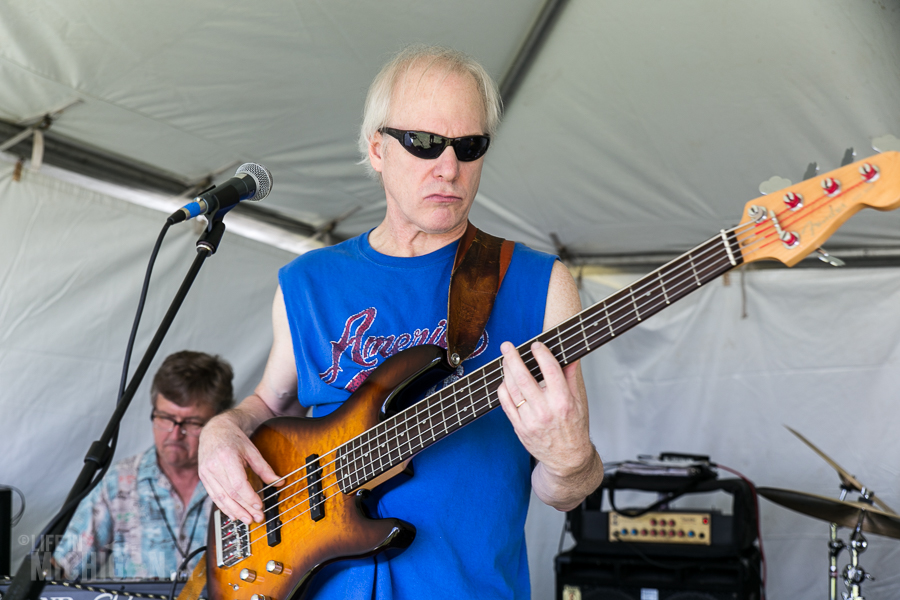 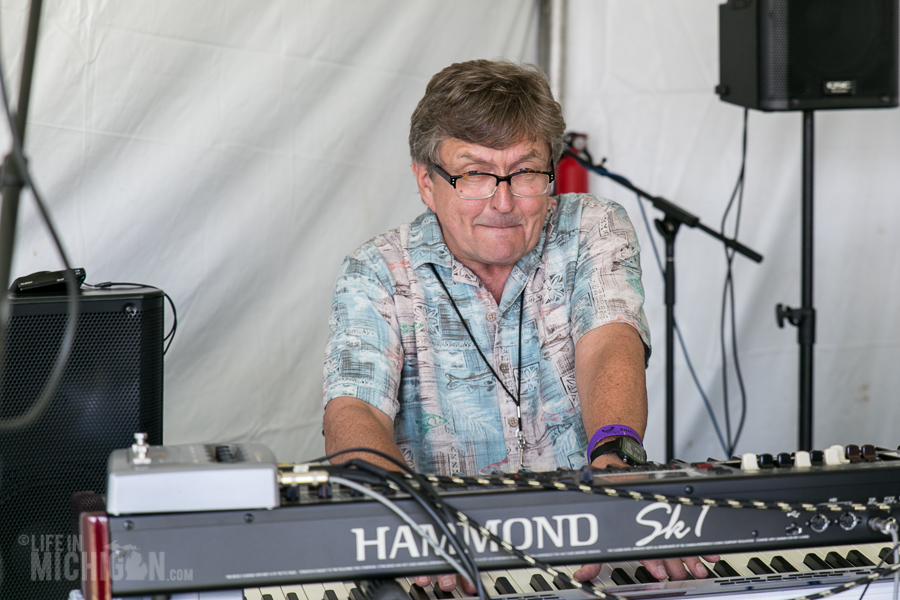 Who wears a green tights and red speedos, sports a handlebar mustache, and his beer goggles are always slightly askew? 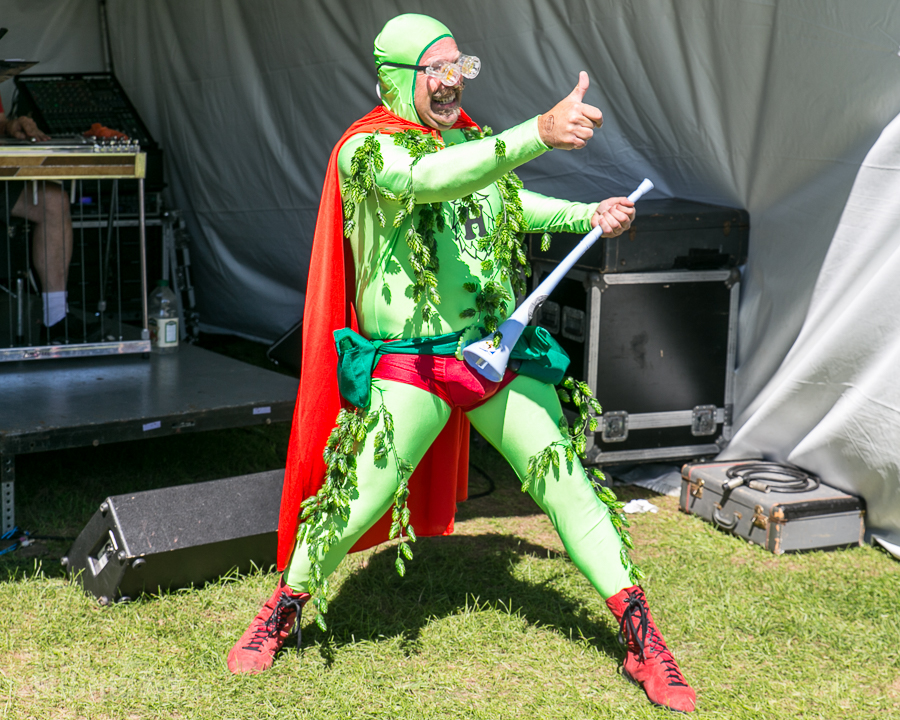 If you said, “Hopman” you get the prize! But then anyone who has attended a Michigan Brewer’s Guild festival recently would know that.

What is red and white and is a sure sign that you’re close to beer time? 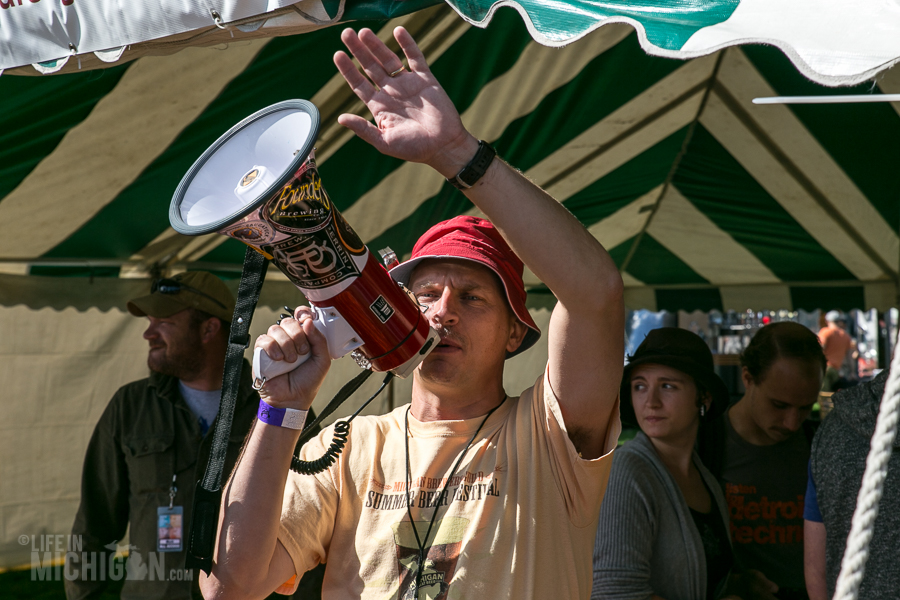 Victor and his megaphone laying down the rules for the festival. It’s a thankless job, but someone has to do it. Thanks Victor!

What do these three bad boys have in common? Hint: they are not trolls. If you said, they like the letter B you might be right, but it isn’t the answer. How about these two letters: the U.P.

Chuck also has a tattoo that offers homage to Blackrocks Brewing. Clearly he loves Michigan Craft beer. He liked the Hockadoogie Imperial IPA and the Mondo Beardo Imperial Stout from Blackrocks. I opted for the Razzle Rabbit and in fact, I could go for one right now as this mineral water I’m sipping is not cutting it. 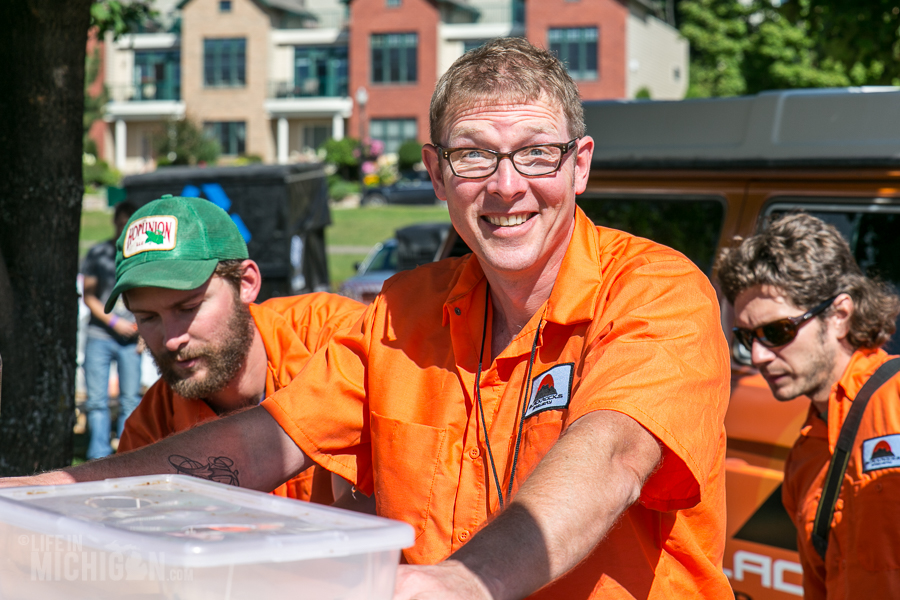 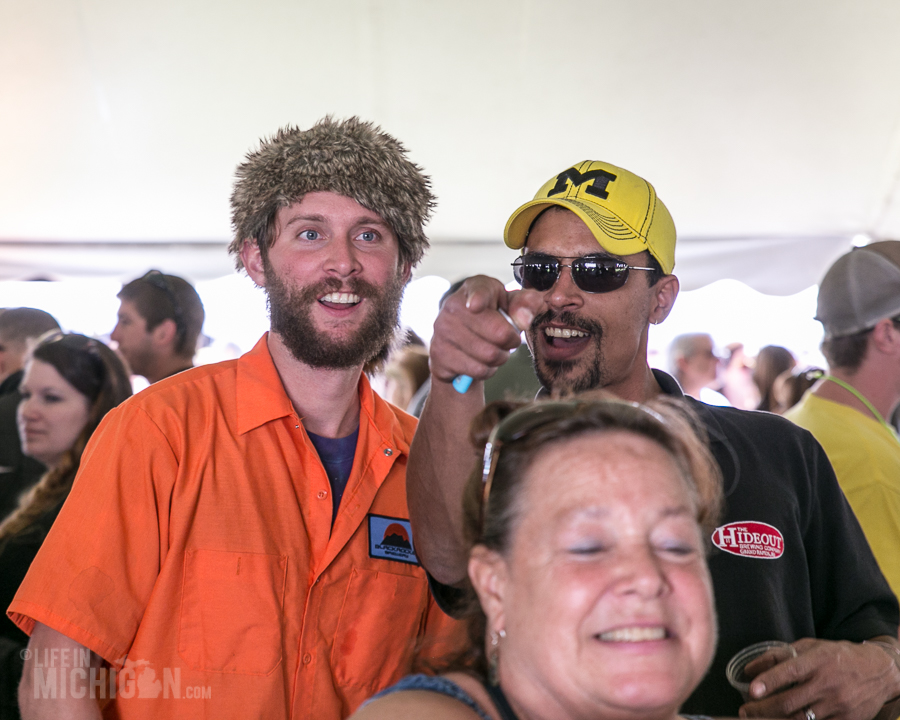 Chuck was walking on the wild side and tried the Holy Mole – A Cinnamon Chili Chocolate Milk Stout from Brickside Brewery. He is not a fan of pepper or chili in his beer. I guess he prefers catsup but he really liked the Holy Mole. The chili flavor was kind of  warming. 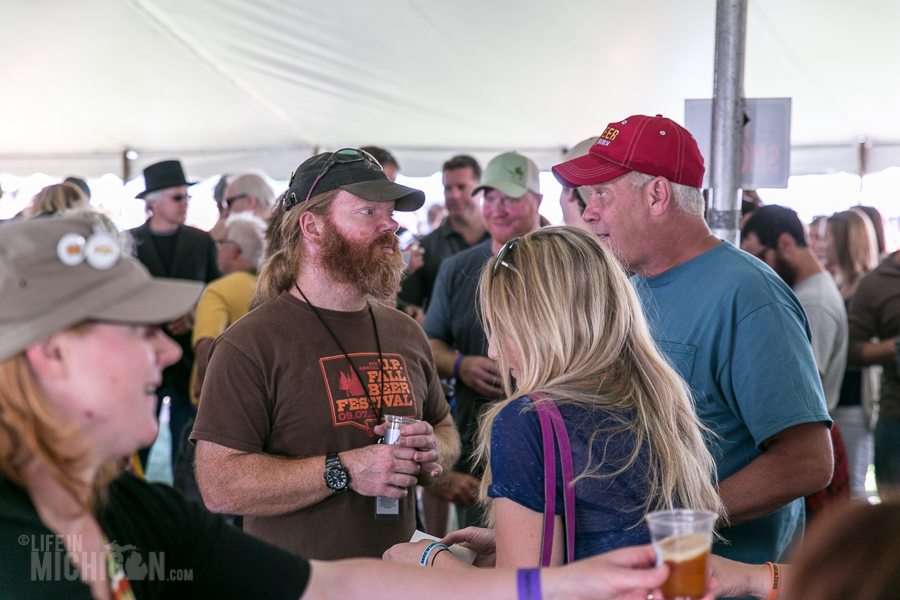 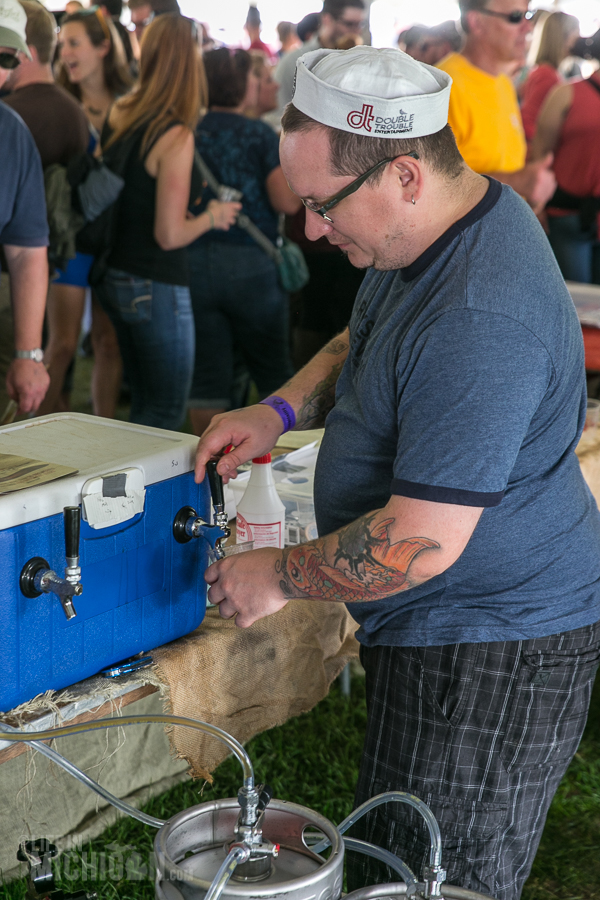 What is Black Shirt Beer Review? 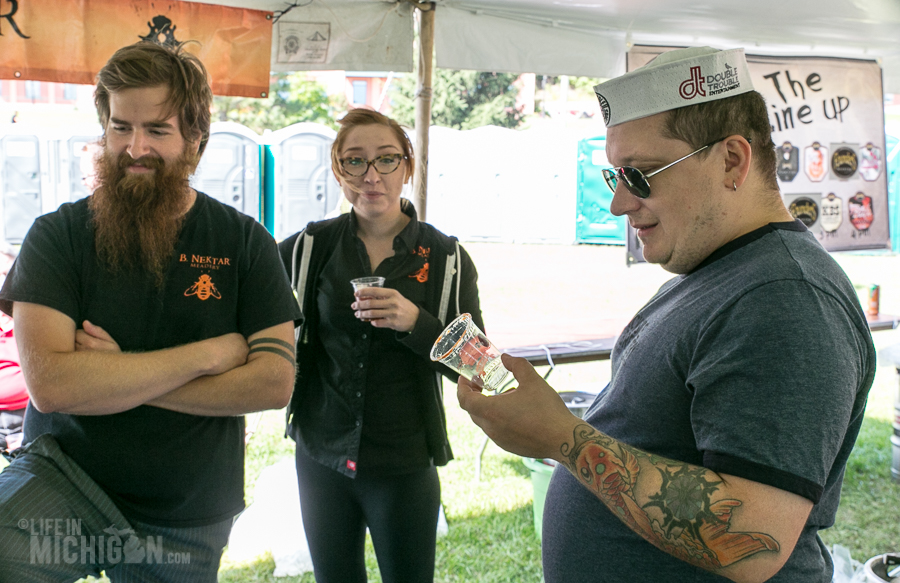 Simply, they review beer and make video reviews that are available on their site and on YouTube. The Upper Michigan’s Source posted a nice new piece on them in September. We met the Reinaas at the Michigan Winter Beer Festival.

Who is playing peek-a-boo? Could it really be Cabe Churchill from Dark Horse Brewing? 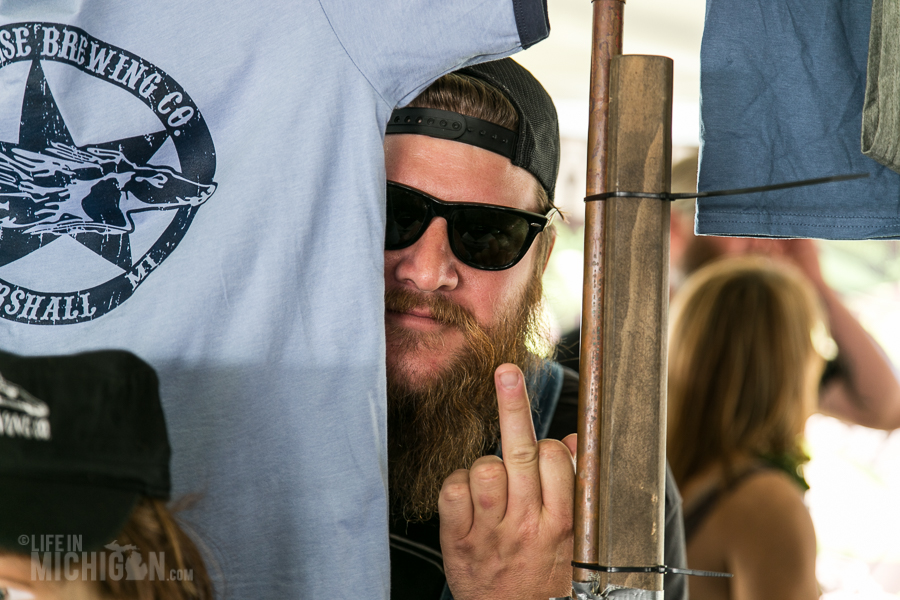 Yes, I believe it was.

Chuck always gets the Bourbon Barrel Plead the 5th if it is available. Clearly he loves it. I had Hong Yu’s Heart of Red Gold. It was delicious. I never met Hong Yu but I still can’t help thinking about her when I head out the door for a run. Please consider donating to the Global Children Cambodia “Building a Brighter Future” fund in her memory.

Who is this demure fellow? Hint: He works for Greenbush! 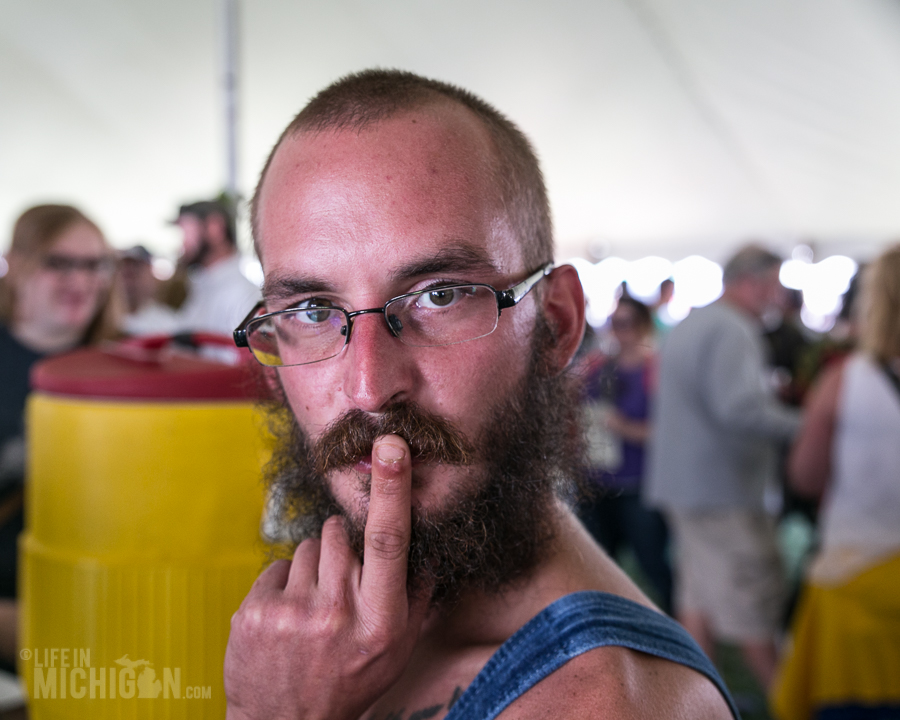 Ryan Beach did you say?

He and his co-workers from Greenbush brought 25 beers to the festival. It was hard to choose. I had the VanderBush and Chuck sampled the Litigious which we can’t find on the beer program today so maybe there were more than 25 beers to pick from. Any who, both were good. 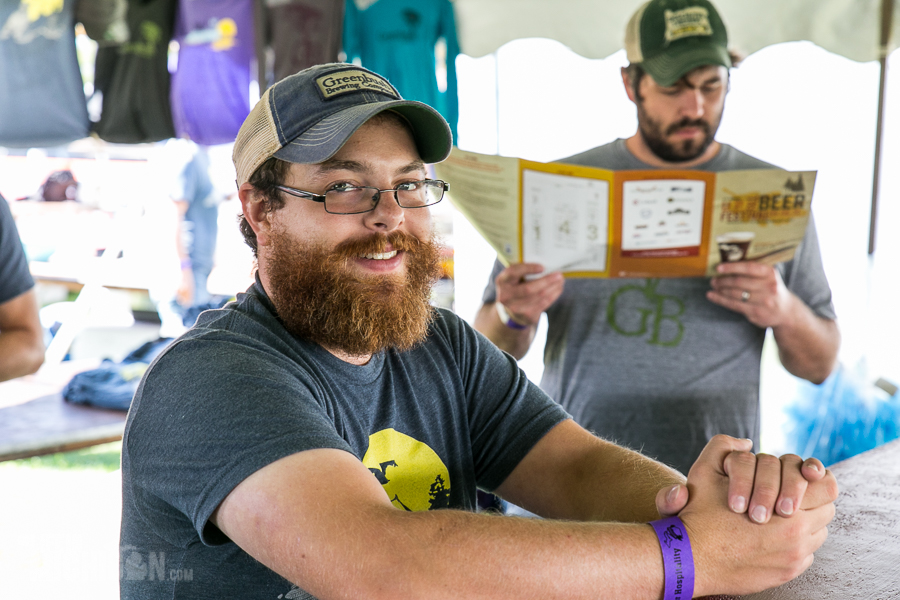 Help me here! What would you call these clearly confident beer enthusiasts? 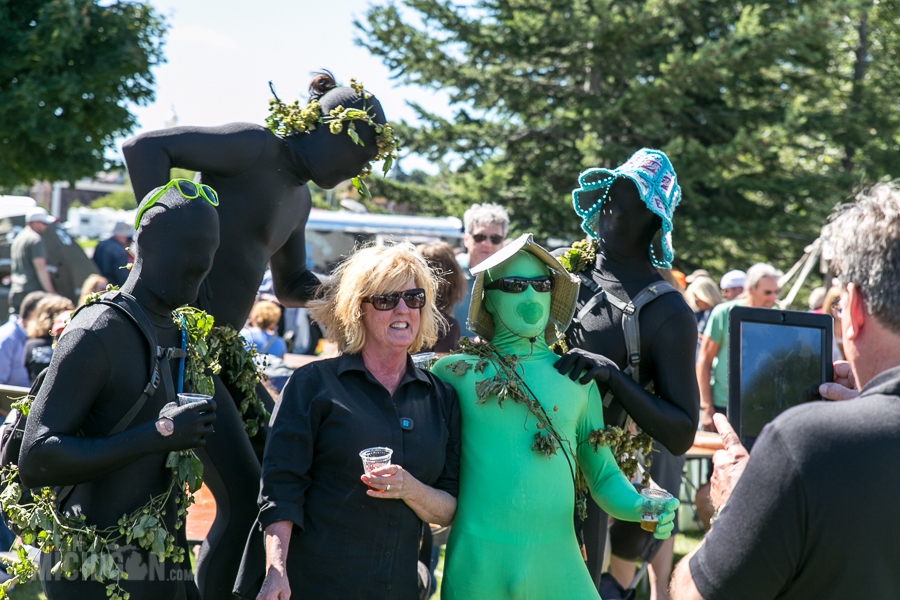 What happened when everyone heard that the U.P. Fall Beer Festival was awesome? 4,100 people showed up on September 9, for the 6th Annual Festival that featured more than 50 breweries and over 400 different beers. 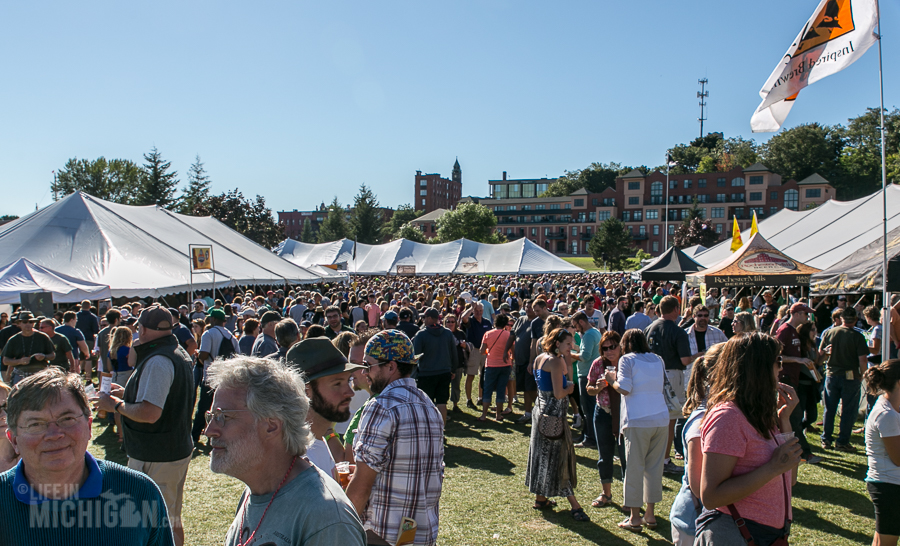 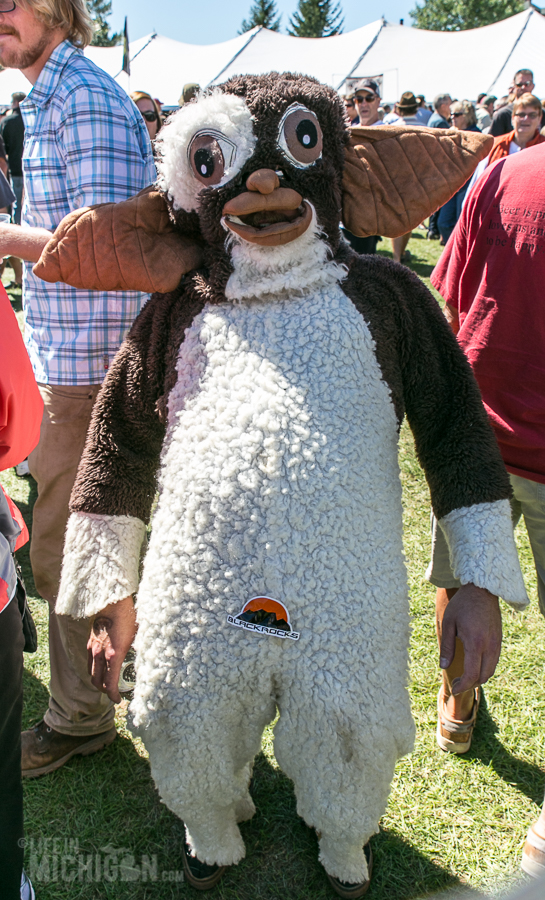 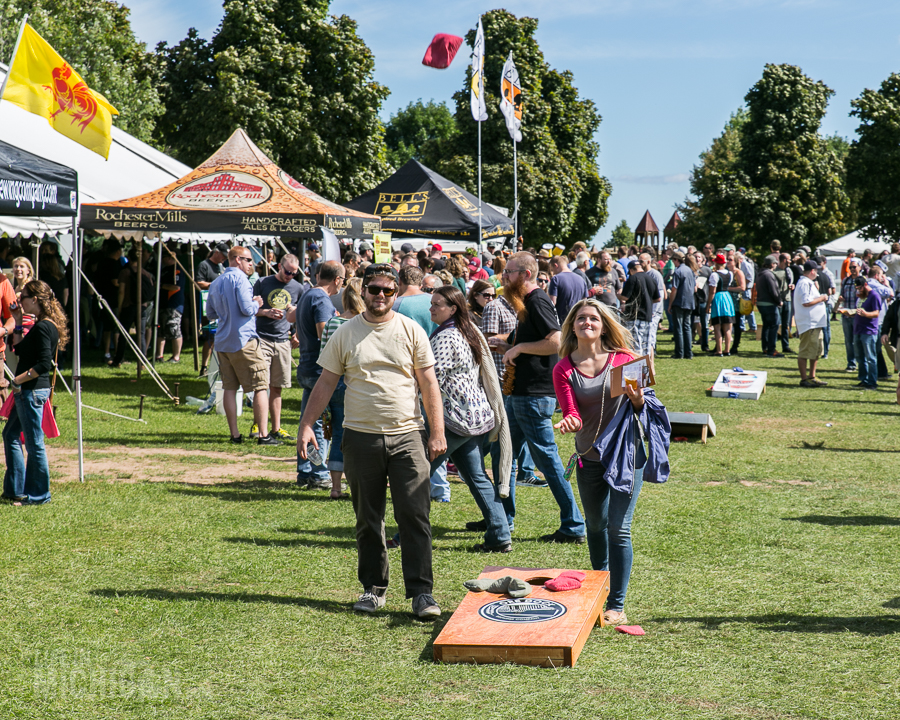 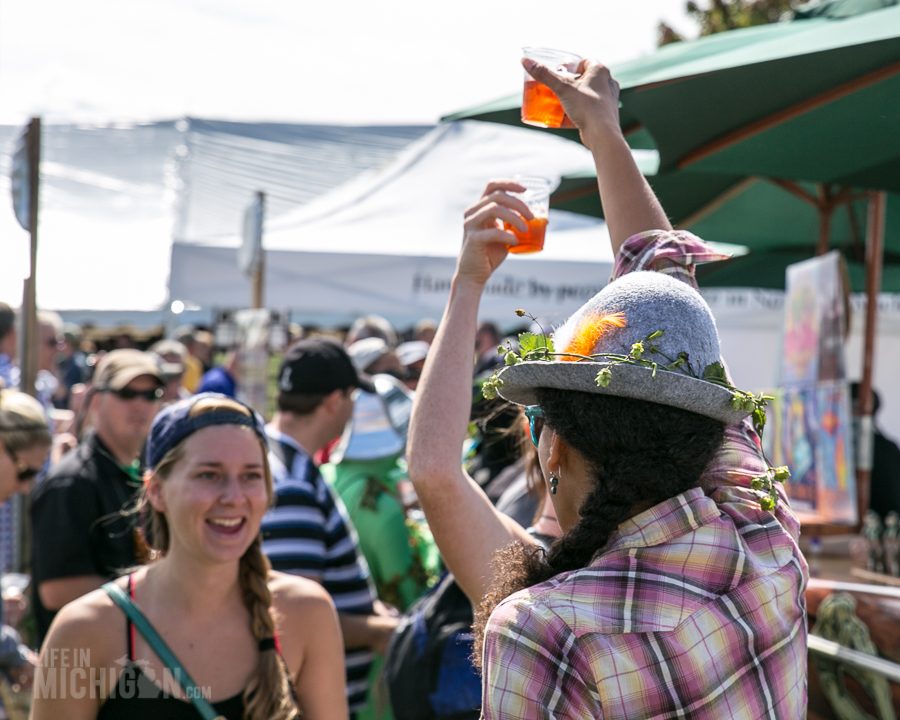