My parents’ 1947 Wedding was not on the cover of Life Magazine like Princess Elizabeth and Prince Philip’s wedding but it was reported in the Chelsea Standard, “Elizabeth Jean Brown, daughter of Mr. and Mrs. Albert Brown of Farmington, and L.Dean Sodt, son of Mr. and Mrs. R. W. Sodt of Chelsea were married at 10 o’clock Saturday morning, Sept. 20, in Our Lady of Sorrows Church at Farmington.” I personally think my parents were far more beautiful but I am a bit biased.

And I had no idea Elizabeth’s middle name was “Jean.” Wow! I seriously had no idea. 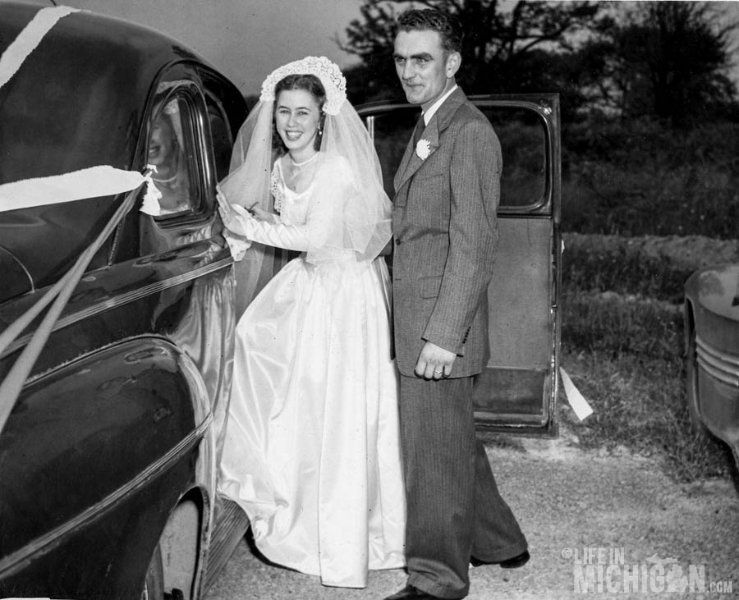 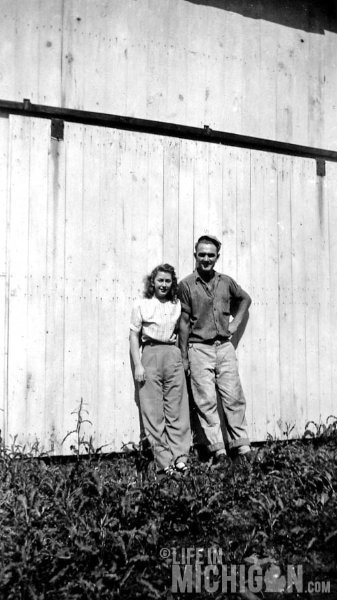 My mother always said she met my father at a wedding. They were both in the wedding party. I wish I knew which wedding. After Betty graduated from University Detroit Mercy School of Nursing she worked at Foote Hospital in Jackson, Michigan and I’m sure L. Dean (my father) was making frequent trips to Jackson. I just recently learned that my Uncle Milner paid Betty’s nursing school tuition.  I found that rather sweet! 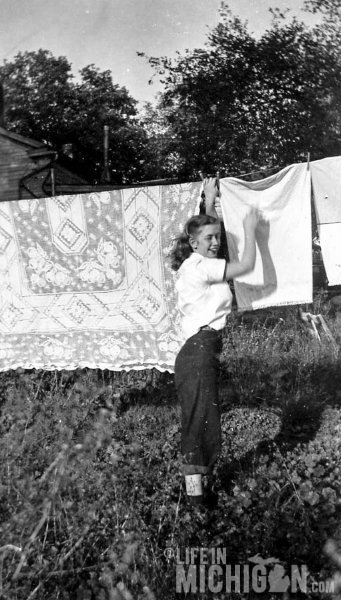 Written on the back of the photo, in my Grandmother Ruth’s handwriting,”Our Bride on washday.” She was a cutie. 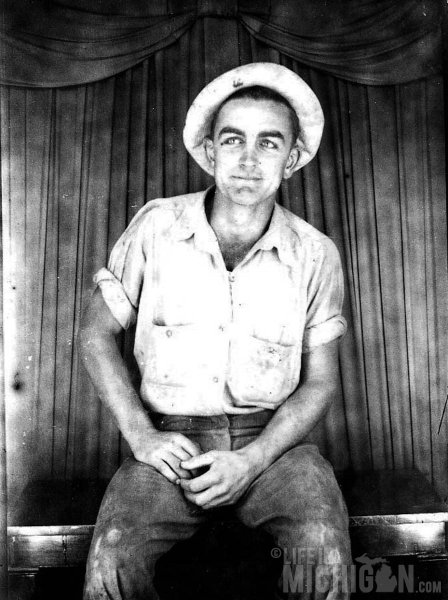 There is a funny story about my father’s name. We have two birth certificates for him. The first one lists his name as “No Name” Sodt dated very close to his birth date and the other birth certificate is dated a year later and lists his name as Louis Dean Sodt. I heard my father’s name story many times while I was growing up. Eldean or Aldean was a popular name at the time and my grandmother wanted it for his name but my grandfather didn’t care for it. They finally arrived at Louis Dean but  she quickly shortened it to L. Dean. Ruth… I guess she got her way at the end of the day.

I just need to say it, I think my father was extremely handsome. Good grief! 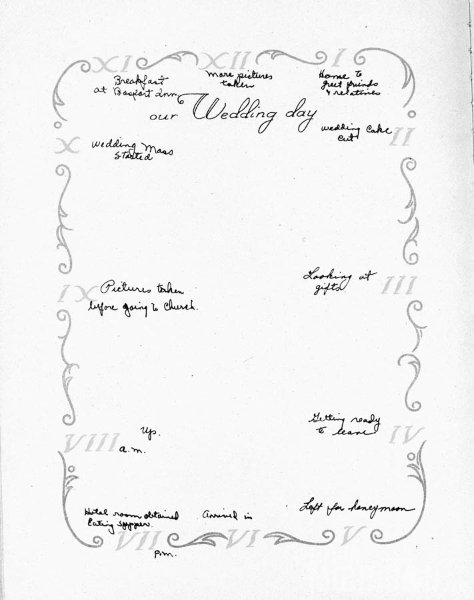 This page is from my parents’ wedding journal. It details their schedule for the day but in clock format (kinda odd but cute). Betty was up by 8 and pictures were taken before going to Our Lady of Sorrows.

Pictures before going to the Church 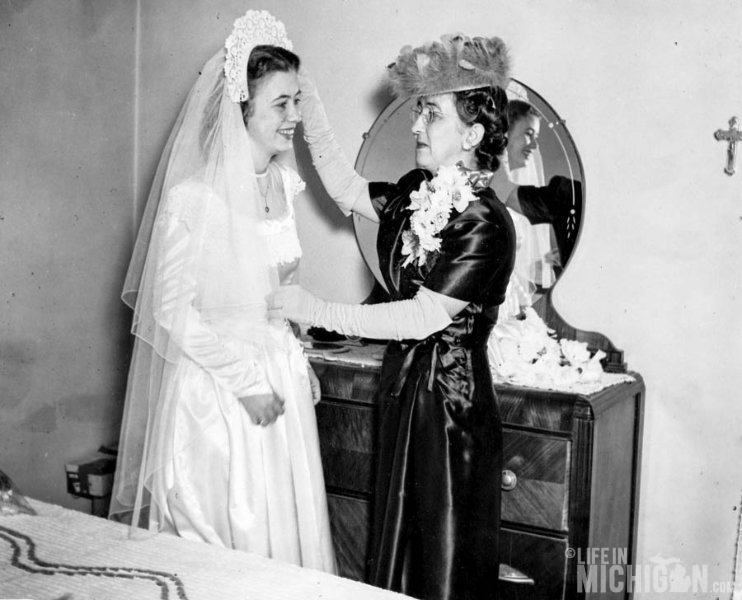 Betty and LuLu Brown primping before the wedding. Lulu made Betty’s dress. It was of “white slipper satin with a yoke of illusion trimmed with lace which matched the tiara she wore with her fingertip veil.” How do I know this? The Chelsea Standard said so and I am the proud owner of said dress and I wore the same dress in my wedding. It was more of a cream color when I wore it. Many of Betty’s granddaughters wore the necklace she wore in her wedding.  Betty’s looks so excited.

Did you notice the crucifix on the wall?  It hangs on the Betty’s wall today. 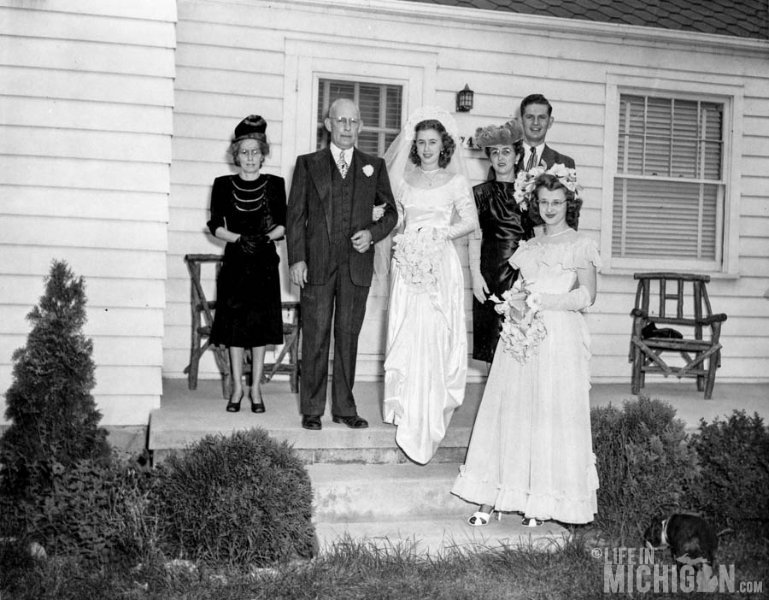 Betty with her mother and father standing on their porch in Farmington, Michigan. I’m making a guess, but I think that is “Little Mary” at Albert’s right hand. “Little Mary” was LuLu’s sister from Ohio. (Yes there was a Big Mary.) She was married to Edgar Baughman and gave Betty and L. Dean a tablecloth as a gift. And that is the beautiful Jeanne Fisher, Betty’s Maid of Honor. She wore a pink gown and wore pink gladiolus and chrysanthemums in her hair. The bouquet was matching. I have not a clue to who the guy is in the back row. Maybe one of Betty’s brothers? I love the Boston Terrier in the lower right hand corner of the picture. I’m pretty sure he belonged to my mother. 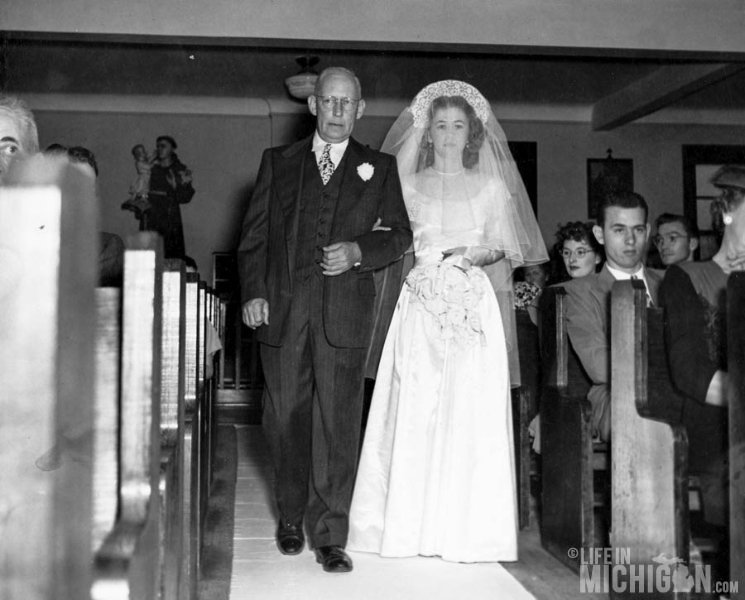 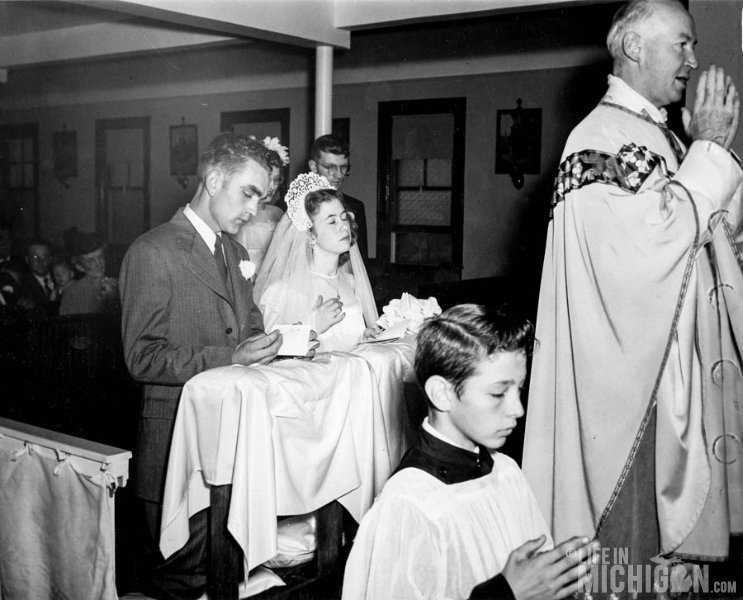 Giggle… L.Dean is flipping through the prayer booklet. Betty is clearly praying. Must be she didn’t need to follow along in the booklet. 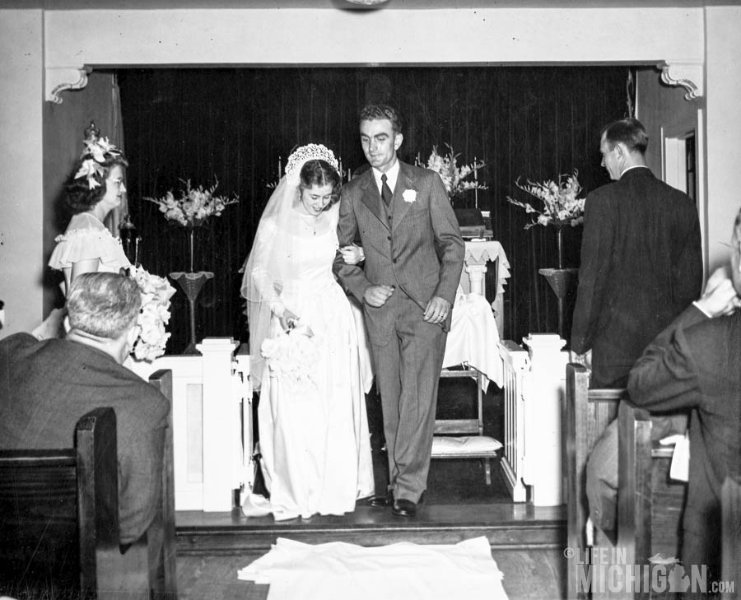 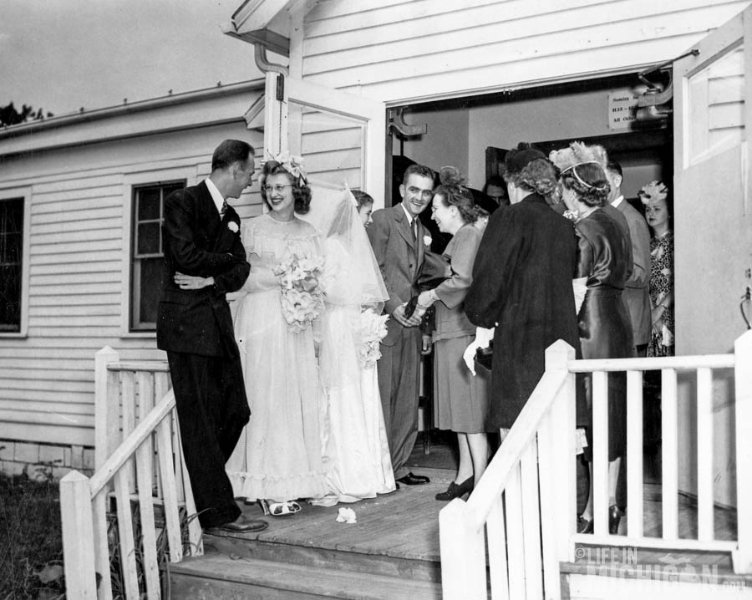 I love this picture! Doug Kennedy (the best man) is flirting with Jeanne Fisher. 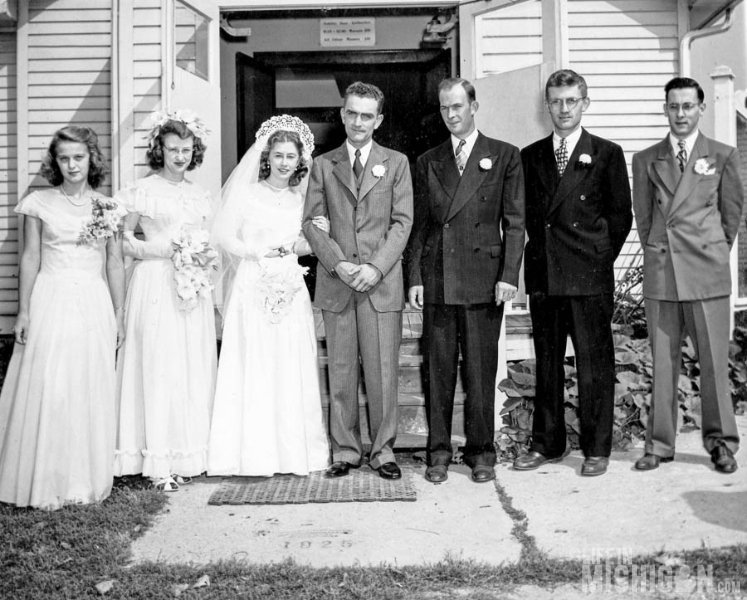 Marilyn (a cousin of L.Dean’s) was the soloist and wore a yellow gown with yellow flowers in her hair. You already have the skinny on Marilyn’s dress. She was Betty’s best friend. Doug Kennedy was my father’s best friend and lived just a few miles from my parent’s farm their entire lives. Doug married Irene and their children were all good friends with Betty and L.Dean’s children. Howard Sodt married Dona Albright and their children (my cousins) were a lively part of our family’s history. William Brown (Bill) was Betty’s twin brother. He married Mary and their children (my cousins) were also a prominent part of our family’s life. 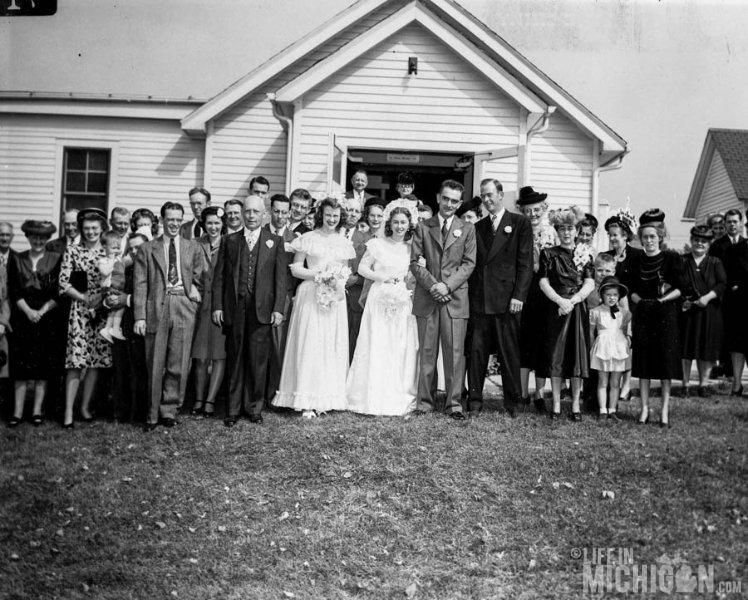 I’m pretty sure the kids are Peter, Karen, and Doug Spike. I think Aunt Carol is holding Doug.

Can you match the guests to names on the list? Leave a comment if  you see any familiar faces! 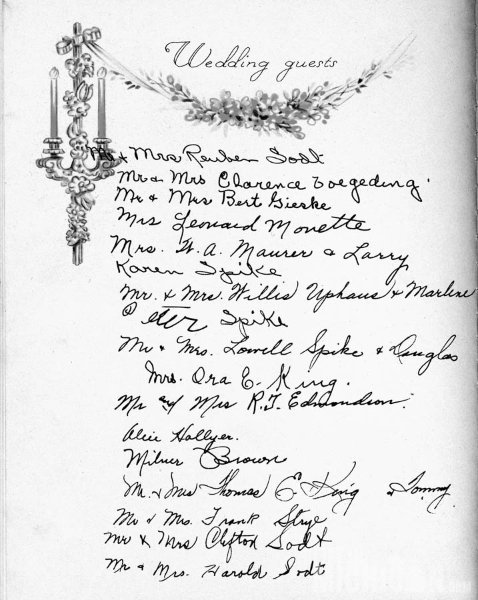 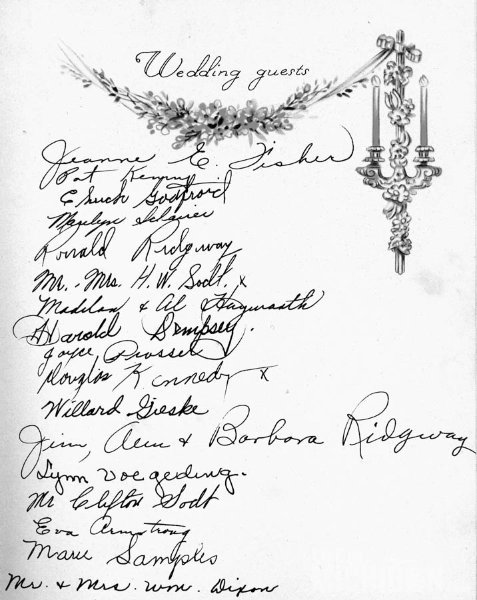 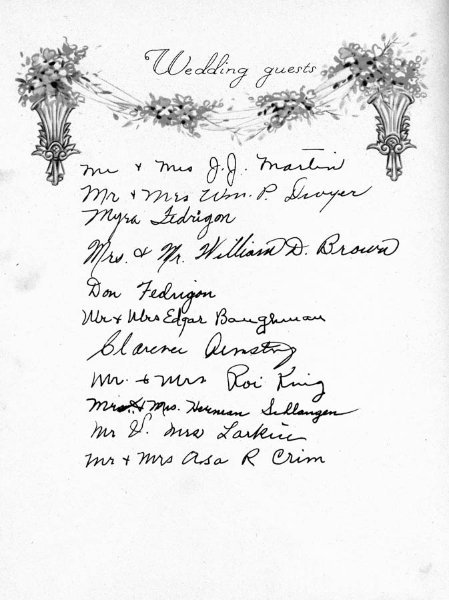 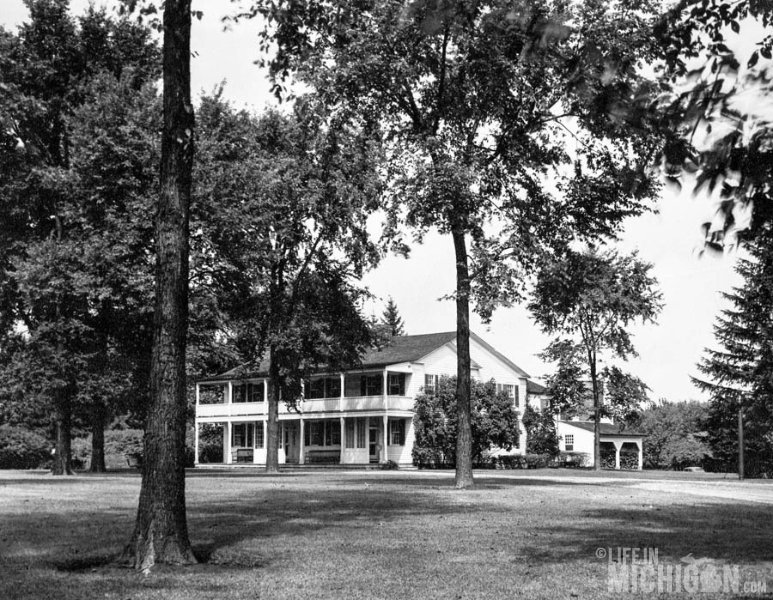 A wedding breakfast was given at the  Botsford Inn in Farmington, Michigan for members of the bridal party. 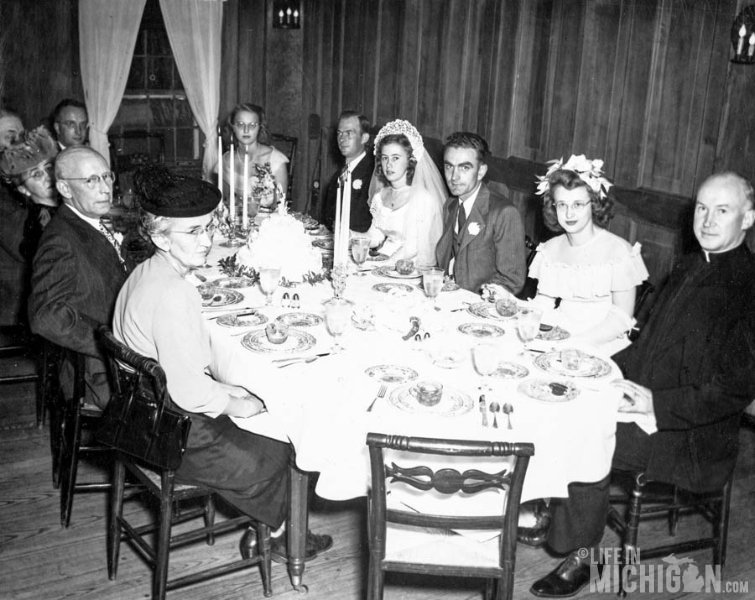 And the other 75 guests were served a luncheon at Albert and Lulu Brown’s home. More pictures were taken at the Botsford Inn. 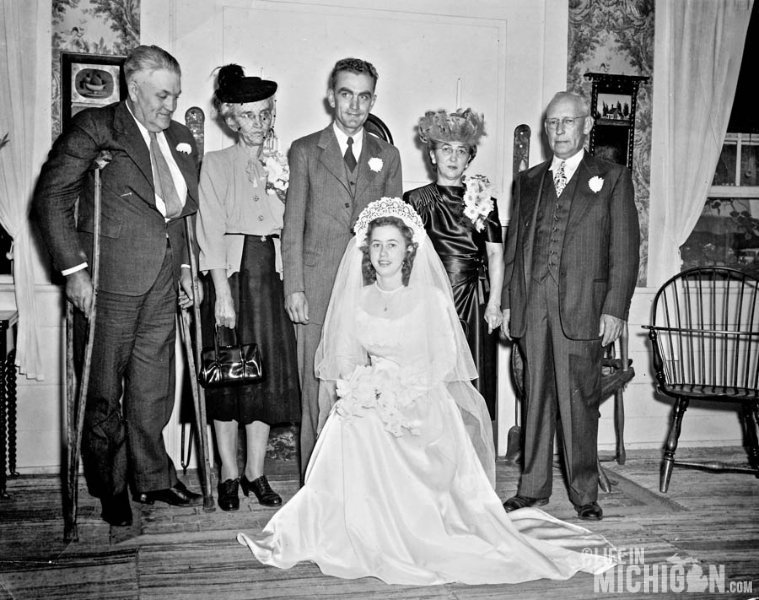 Why does Reuben have crutches? In June 1933 or 34, Rueben and Howard (L.Dean’s brother and best man) were mowing hay and a bad thunderstorm suddenly came through with high winds and tornadoes. Rueben tied up the team and he and Howard took shelter under a hickory tree. (This is why you don’t stand under a tree in a rainstorm!) The tree came down and Reuben’s legs were trapped. Howard unharnessed a horse and rode some distance to the house. Keep in mind it was the early 1930s and a storm and had just come through. The ground was wet from heavy rains. A horse and wagon were used to transport Reuben to the road and an ambulance took him to St. Joseph Hospital in Ann Arbor. The doctors didn’t think he’d survive so the legs were not set. It is family folklore that the nuns didn’t stop the family from bringing beer into the hospital for him. I’m thinking it is the beer is what saved him or perhaps his German genes. 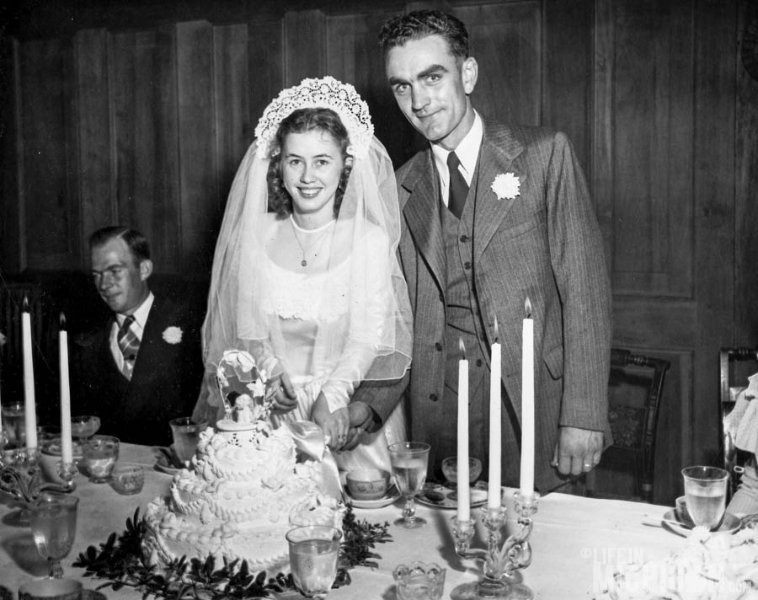 They joined their other guests for a few more hours before they departed for their honeymoon. 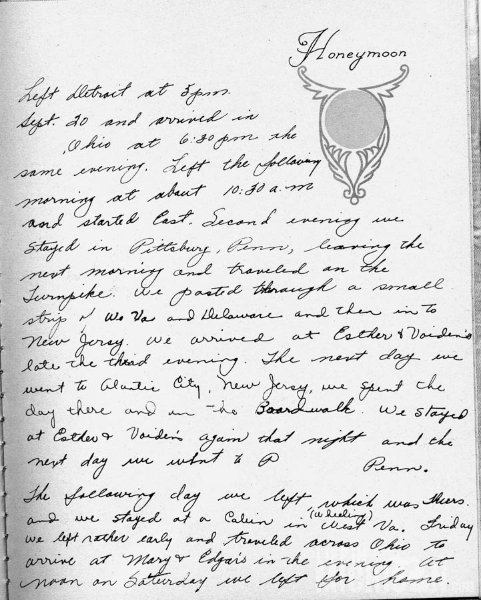 Left Detroit at 5 pm on Sept 20 and arrived in Ohio at 6:30 pm the same evening. Left the following morning at about 10:30 am and started East. Second evening we stayed in Pittsburg, Penn, leaving the next morning and traveled on the Turnpike. We passed through a small strip of West Va. and Delware and then in to New Jersey. We arrived at Esther and Voiden’s late the third evening. The next day we went to Alantic City, New Jersey, we spent the day there and on the Boardwalk. We stayed at Esther and Voiden’s again that night and the next day we went to P Penn. The following day we left which was Thurs and we stayed at a Calvin in Wheeling West Va. Friday we left rather early and traveled across Ohio to arrive at Mary and Edgar’s in the evening. At noon on Saturday we left for home.

There are many more great pictures in the photo gallery.