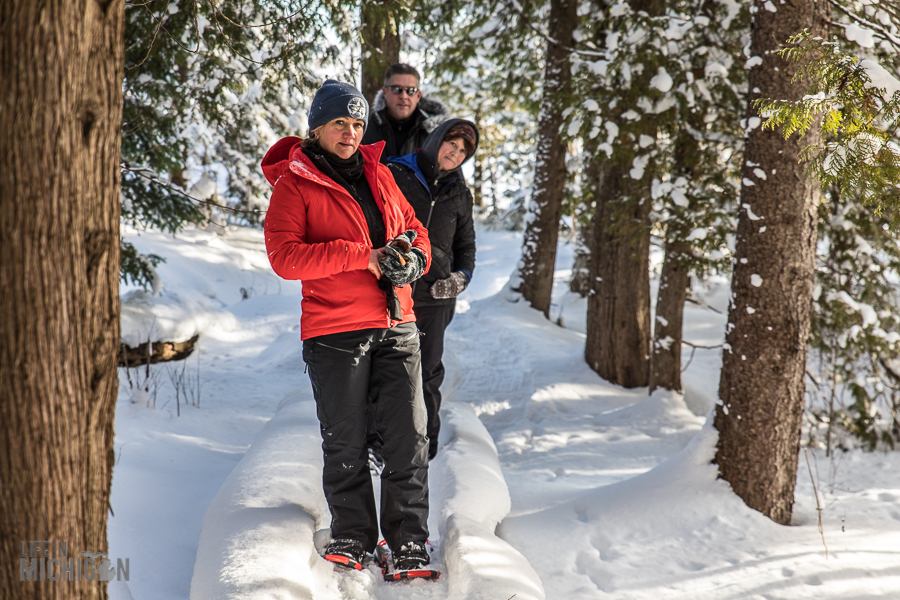 Returning to work after vacation usually includes answering, “Did you have a relaxing vacation?” Since relaxing and vacation is not generally paired in my world, I’m always just a little intrigued as to how someone doesn’t get bored during a relaxing vacation. I laugh just a little as I shake the image from my head of the person relaxing on a beach before regaling them with my stories. (I figure they asked so why not share?)

As the stories tumble out, they predictably asked, “Why in the world were you in the Keweenaw Peninsula in December?” “Snow,” I say. “We wanted a guarantee of snow so we could go Snowshoeing?” But, um, this year there isn’t a shortage of snow in Michigan is the typical response. It sounds lame even to me. Maybe the pointy trees along the Seney Stretch? I suggest. Ok, the real reason, the Fitz in Eagle River posted on Facebook they planned to be open during the winter starting December 28th. As soon as I read it, my fingers were flying, I couldn’t make reservations fast enough.

Vacation planning commenced immediately. Ideas bounced from one iPhone to the next. We finally landed on the following:

The Eben Ice Caves have been on our bucket list for a while. They were just a tiny detour on our way to Eagle River in the Keweenaw Peninsula, in the Rock River Wilderness area of the Hiawatha National Forest. There are plenty of pictures of the Eben Ice Caves bouncing around the internet, so I had an idea of what to expect. I didn’t expect to find the trailhead a short hike across a farmers field.

A few tips for your visit: 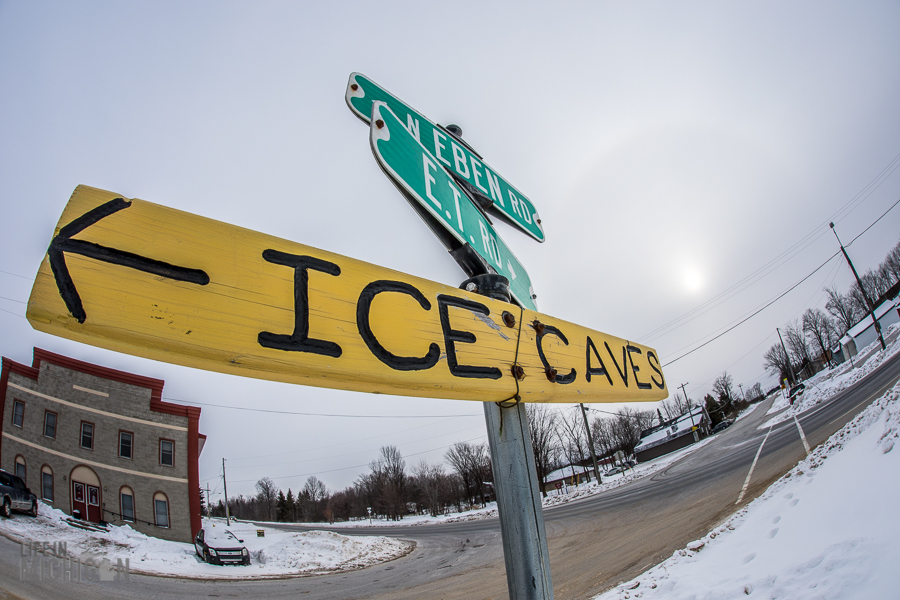 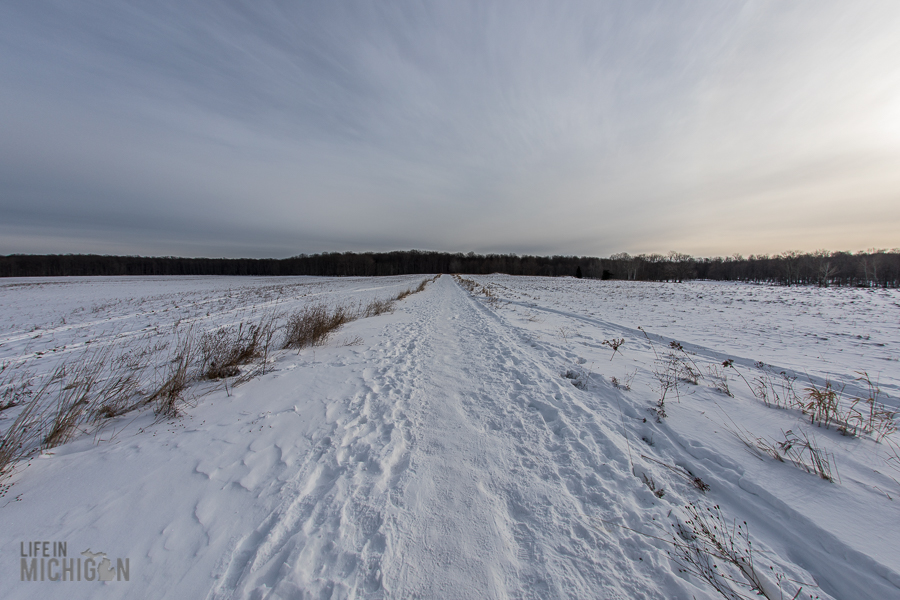 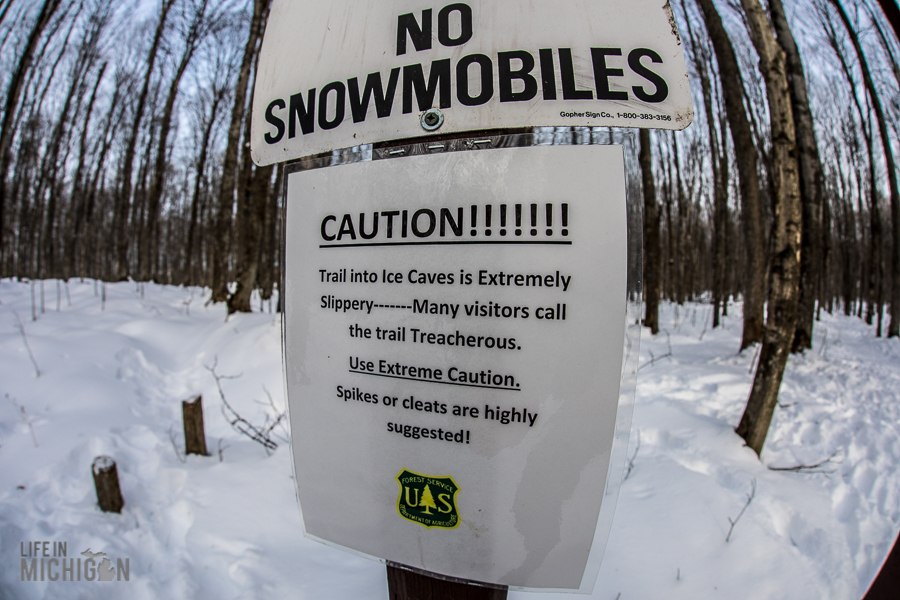 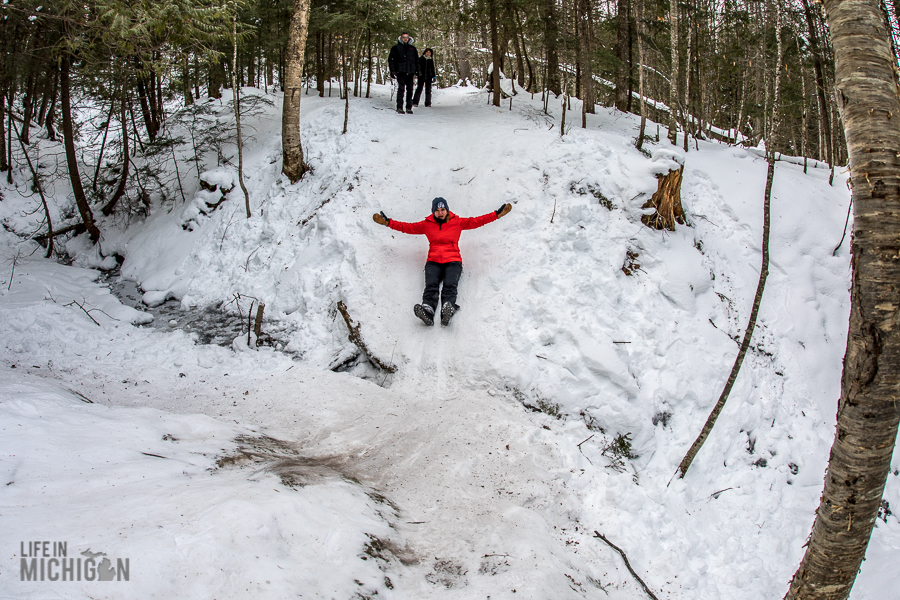 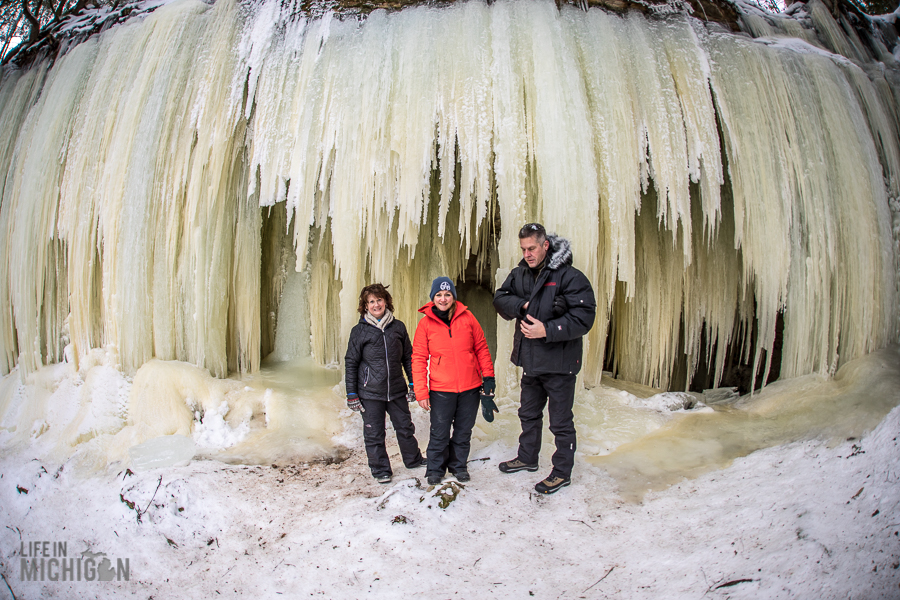 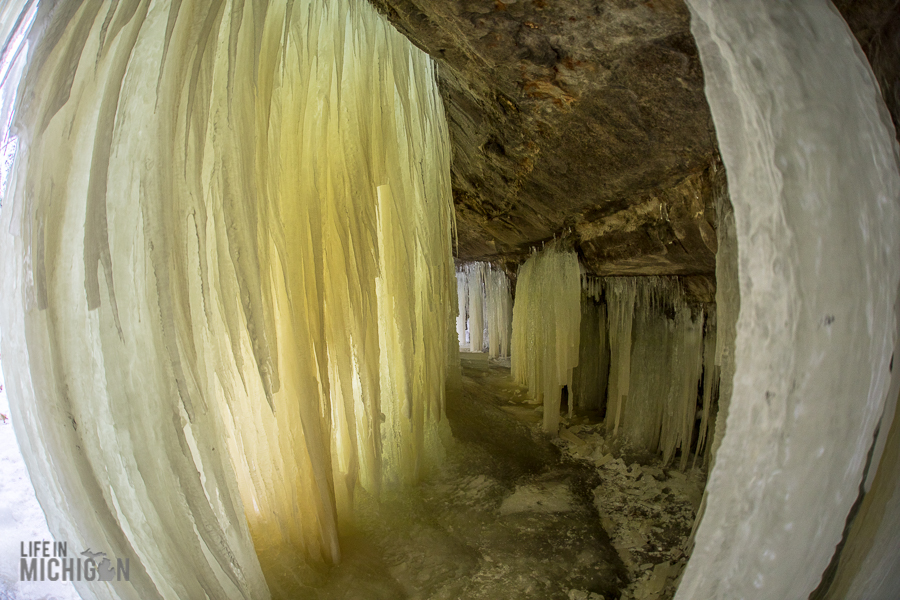 Our second detour on our UP Winter vacation was the Hilltop Restaurant to purchase a sweet roll that weighed over a pound. It wasn’t really a detour because you must travel through L’Anse to reach Eagle River on US Hwy 41. The sweet rolls were as big as your head! So of course, we bought four! 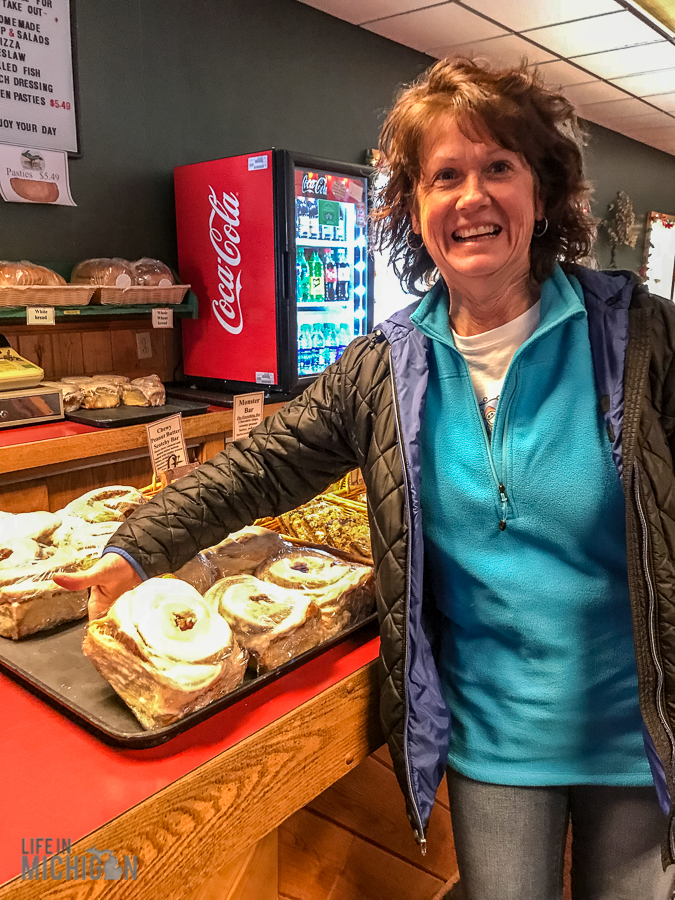 Fun facts from the Hilltop menu:

On a typical busy weekend, we’ll use about 3,000 pounds of flour, 150 pounds of sugar, 60 pounds of apples, 300 pounds of powdered sugar and 400 pounds of brown sugar just baking our sweet rolls, not to mention cinnamon, which comes in 100 pounds at a time. Our record, so far, is 204 dozen sweet rolls baked in our kitchen in the course of one long day.

If you are feeling sad because you won’t be in L’Anse in the next few days and have a craving for an extra large, cinnamon bun, don’t worry! They ship sweet rolls anywhere in the U.S. You can an order online too from their website: sweetroll.com.

Do you remember me saying, “relaxing and vacation is not generally paired in my world?” Get ready for detour number 3 on our way to Eagle River, the Houghton Breakers. Chuck found on the Down Wind Sports website the following:

Breakers is the name for the small park located at the end of Canal Road here in Houghton. Canal Road follows the waterway the separates Houghton and Hancock all the way to Lake Superior. At the end is a small parking lot and the perfect spot to start exploring the wild and crazy ice formations that happen when you combine strong winds, water and cold weather. Depending on how far you are willing to travel there are many small waterfalls and seeps that create large curtains of ice on the sandstone cliffs that are about 1 mile south of the parking lot.

It was REALLY cold when we arrived at the breakers. Tips for visiting: Dress warm and watch your step. Seriously, you are exposed on the ice and that wind can be mean. 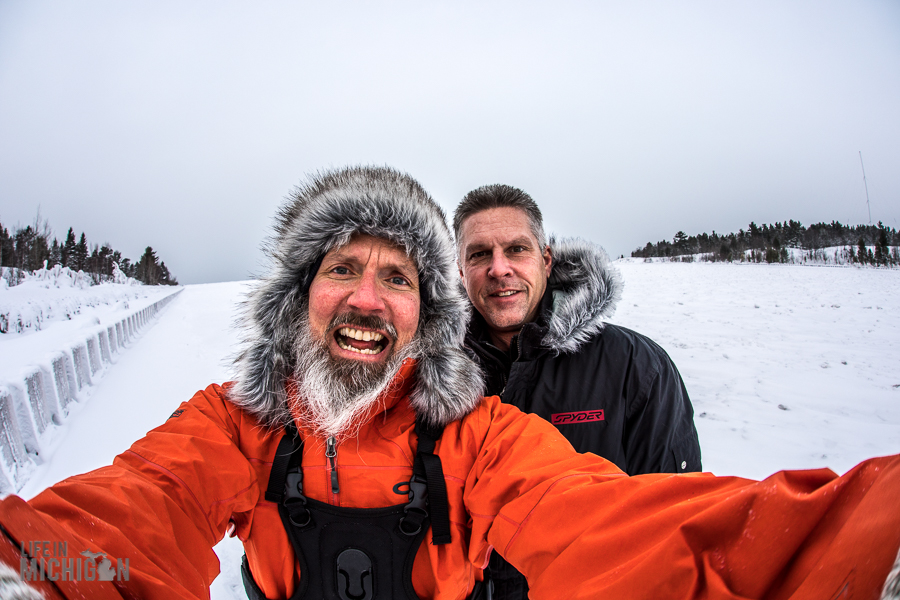 “Perched a matter of feet from the shores of Lake Superior, Fitzgerald’s Restaurant is an award winning destination in Upper Michignan.” It is located at 5033 Front St. Eagle River, Michigan 49950 and it is worth the effort to get there. The hotel has a handful of rooms, maybe 20 and there are fewer tables in the restaurant. It is always packed, so make reservations if you go.

We’ve stayed there before, but never in the winter. Chuck could hardly contain himself and scrambled on to the ice field before breakfast was served. I was a nervous Nelly the whole time. I bet if you look close you can see me with my nose pressed against the window in the picture below. When he returned, I asked the owner of the Fitz, “So do you go on the ice?” He said. “Oh my gosh no! I think I’ve been on it once in 10 years. I don’t think it is safe. That ice is moving constantly.” 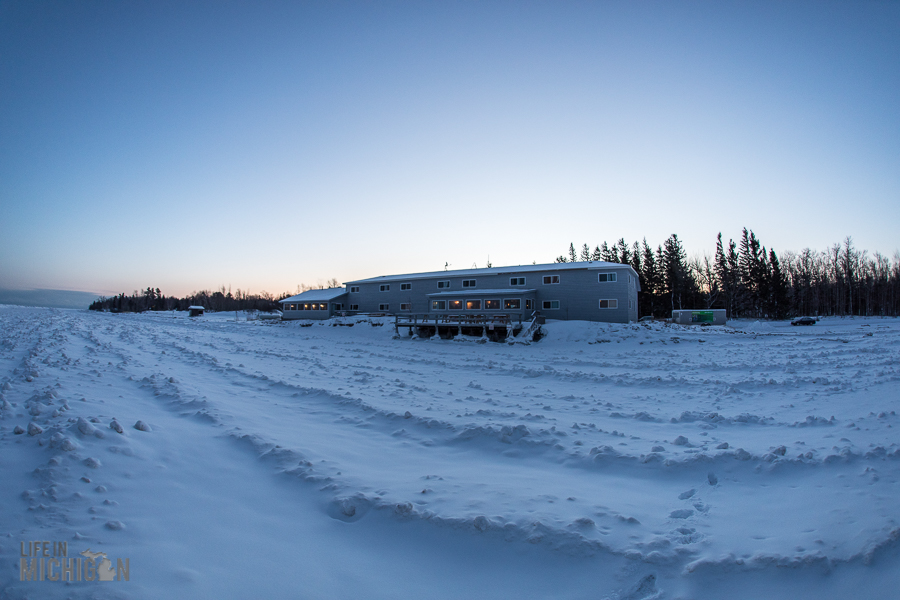 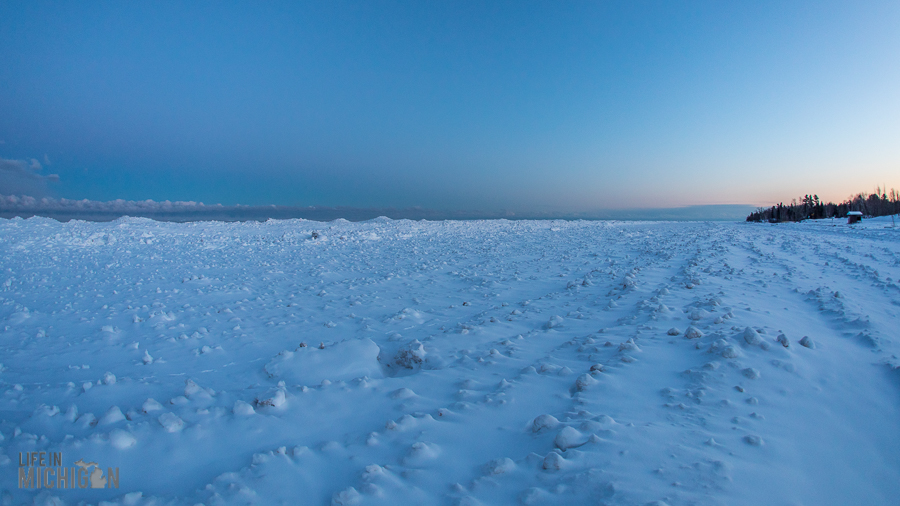 The hardest decision we made during our UP Winter Vacation was deciding where to snowshoe. Down Wind Sports in Marquette listed several options on their website, including Mt. Lookout and Hungarian Falls. As we were leaving the Fitz, the owner suggested Hunter’s Point at Copper Harbor. We also had Estivant Pines on our list. After some debate and discovering a few unplowed roads, we decided on Hunter’s Point; the narrow strip of land between Copper Harbor and Lake Superior.

When we opened the truck doors, we stepped through the wardrobe door into the land of Narnia. If magic is possible, it is possible on his narrow strip of land protecting Copper Harbor from Lake Superior. If magic wasn’t possible, I hoped my cell service worked because Chuck was back out on the ice. I had my fingers poised and ready to dial 911. 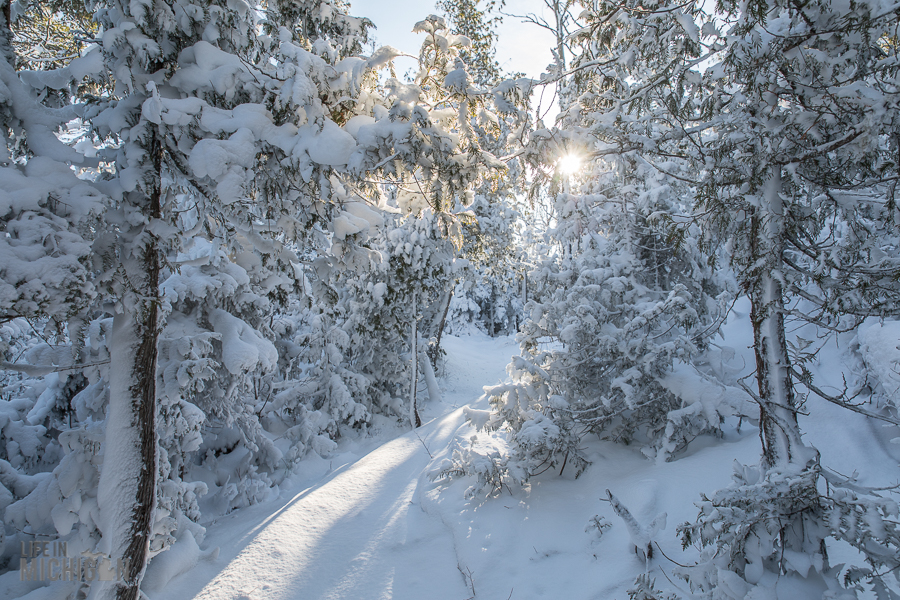 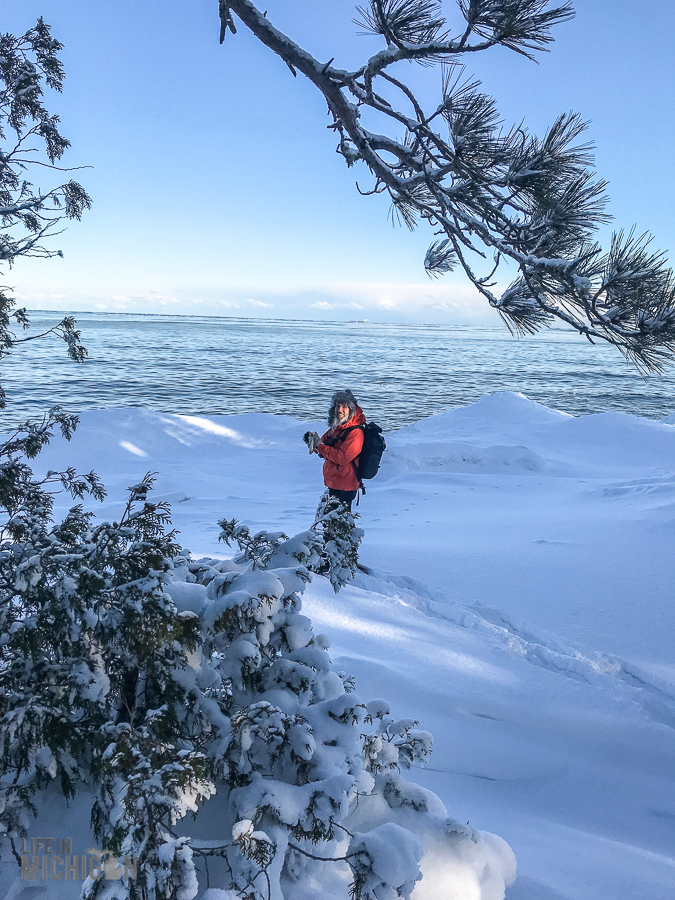 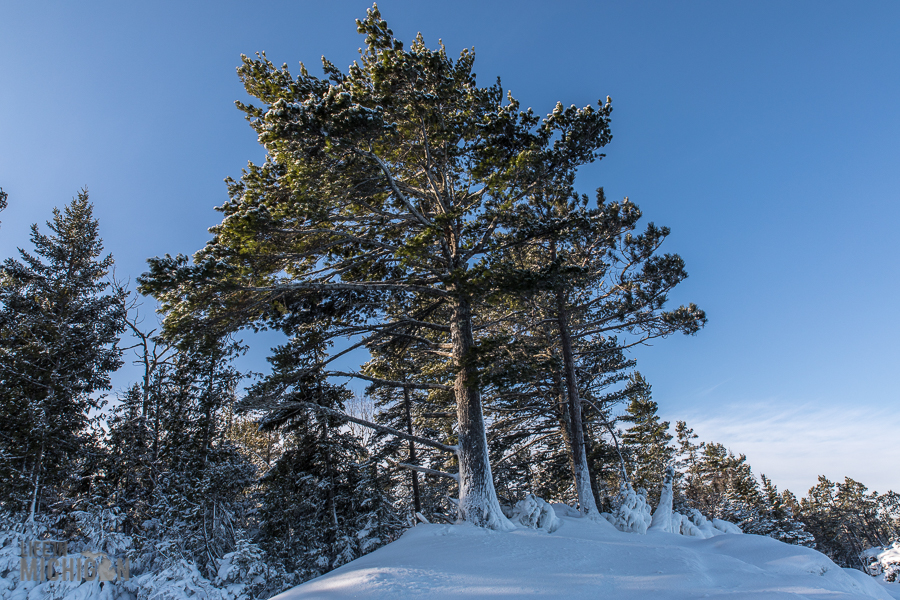 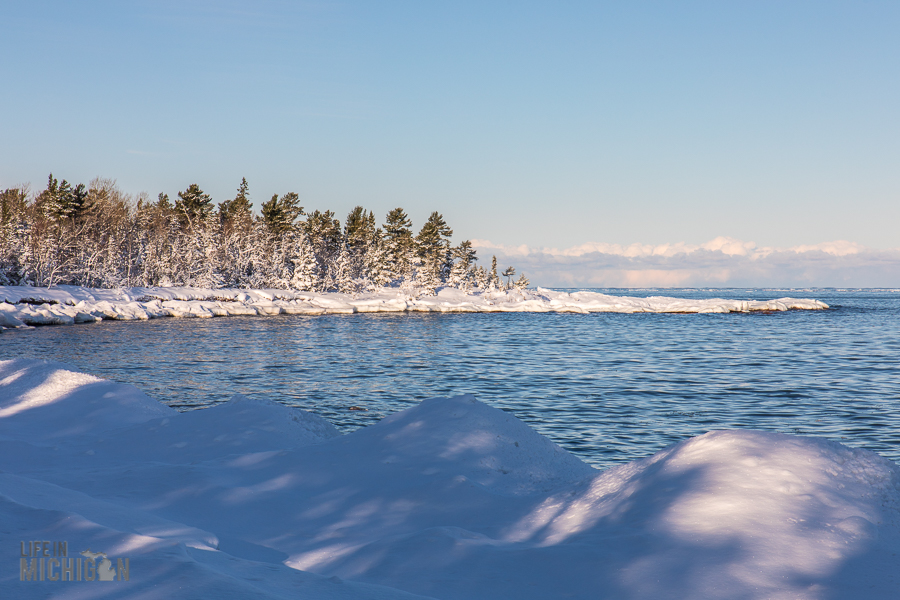 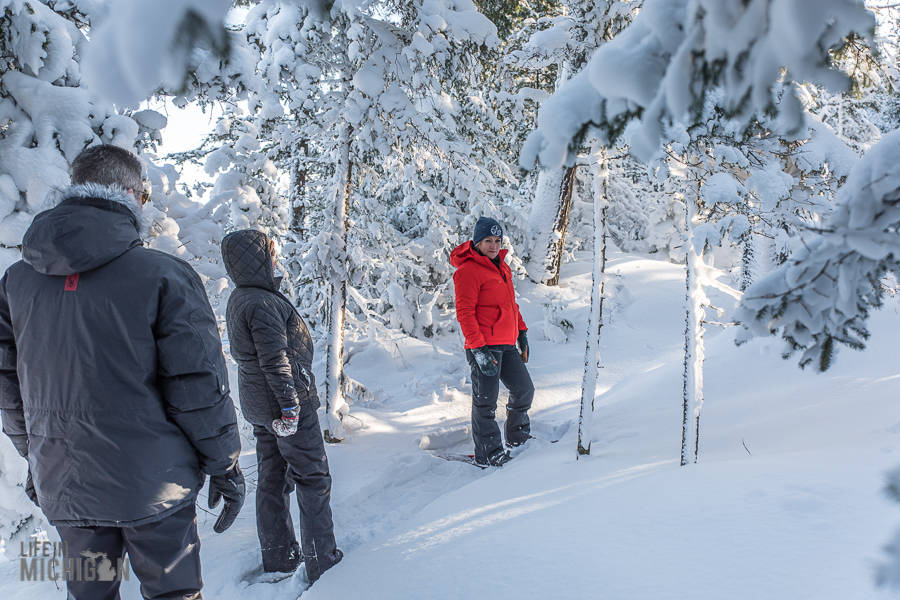 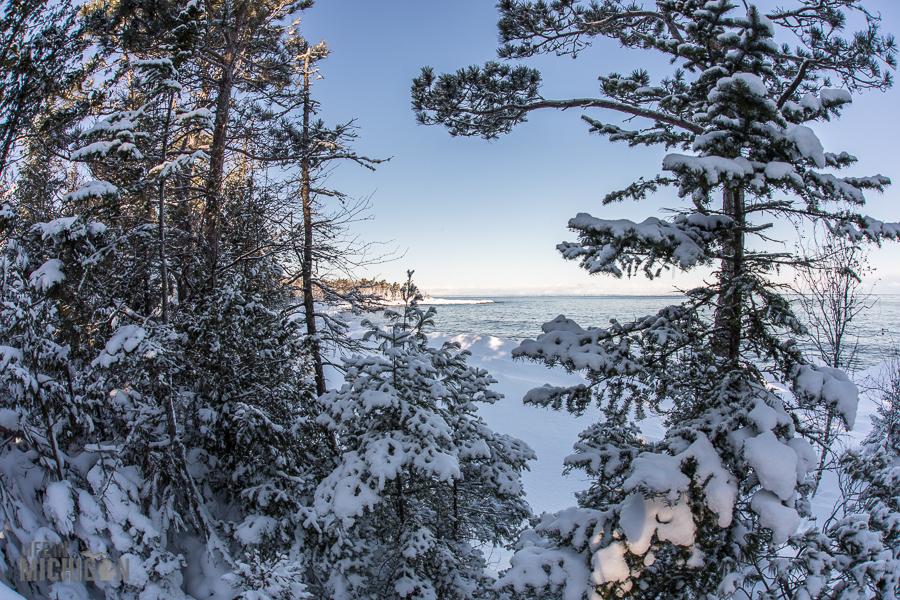 A few years ago we snowshoed along Pictured Rocks National Lakeshore, to the summit of Hog Back Mountain and to Yellow Dog River Falls. All are great destinations in the UP. If you’ve got suggestions, we’d love to hear about them. Please leave us a comment or send us an email at info@lifeinmichigan.com.

Next to the Calumet Theatre, we discovered Shute’s Saloon (pronounced SHOOT-eez). It was built in 1895 during the copper mining boom and not much has changed on the inside, thank goodness. This historical gem should be preserved as a museum. It was an absolute delight to explore. The elaborate stained-glass canopy over the bar is a sight to behold. The bartender was charming. He served us the saloon’s history along with some Michigan craft beer and salty pretzels. History and Craft beer, it doesn’t get much better. 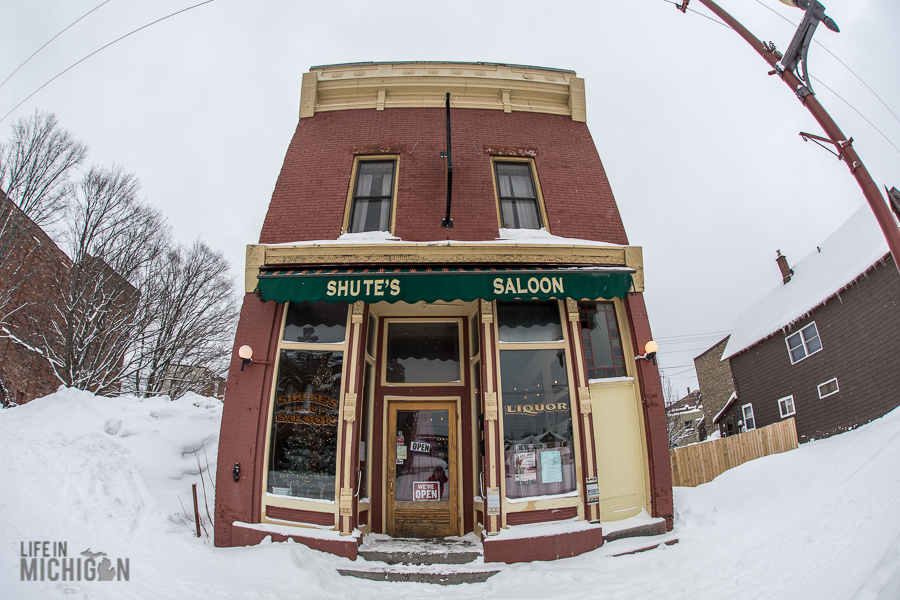 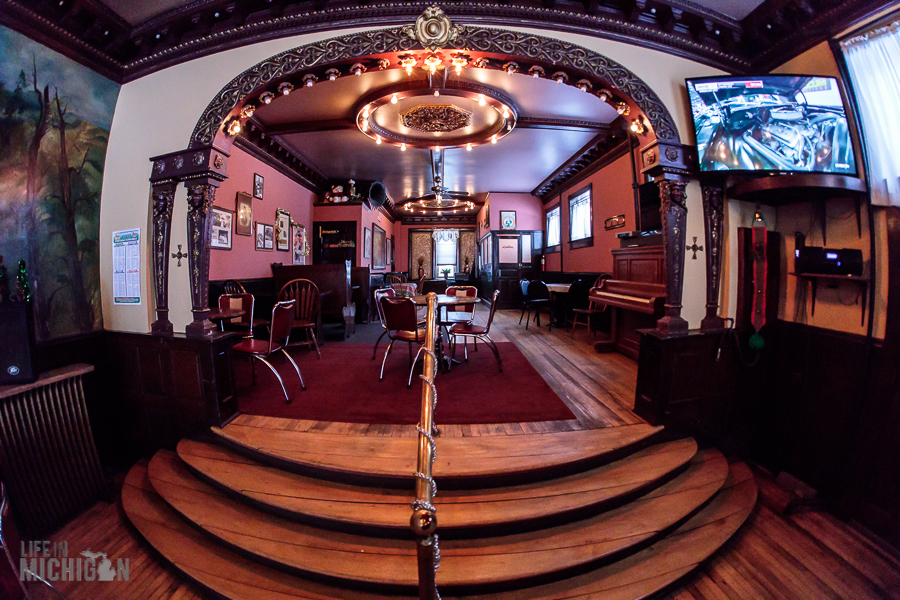 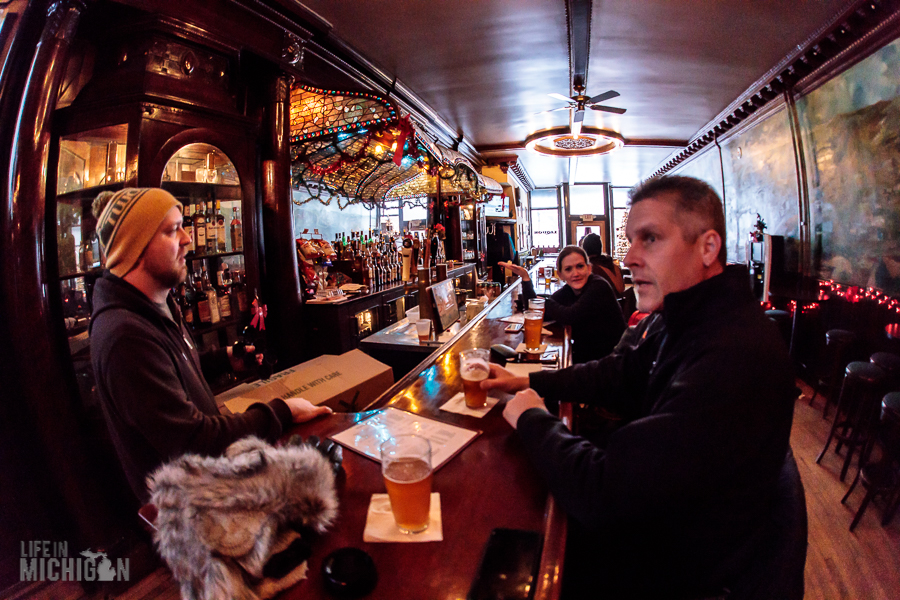 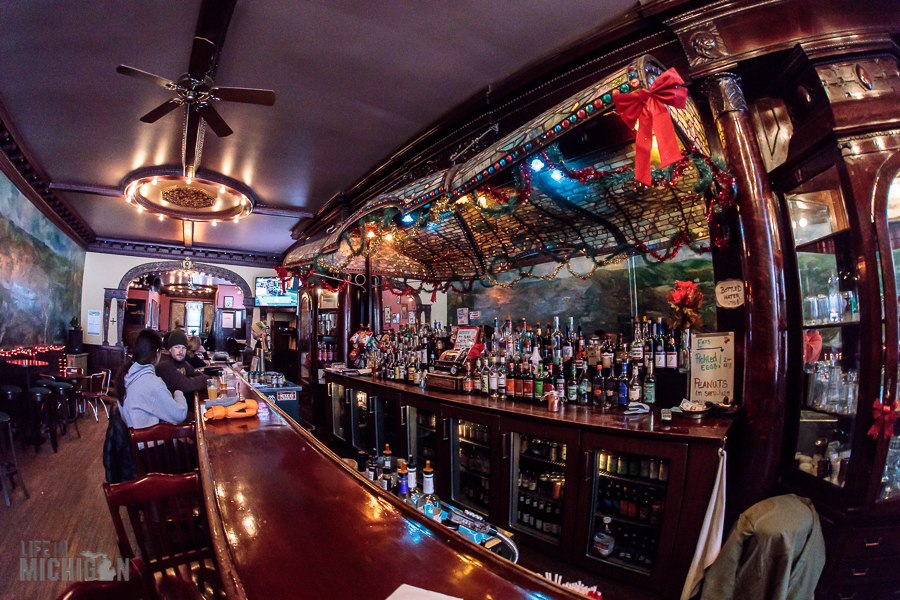 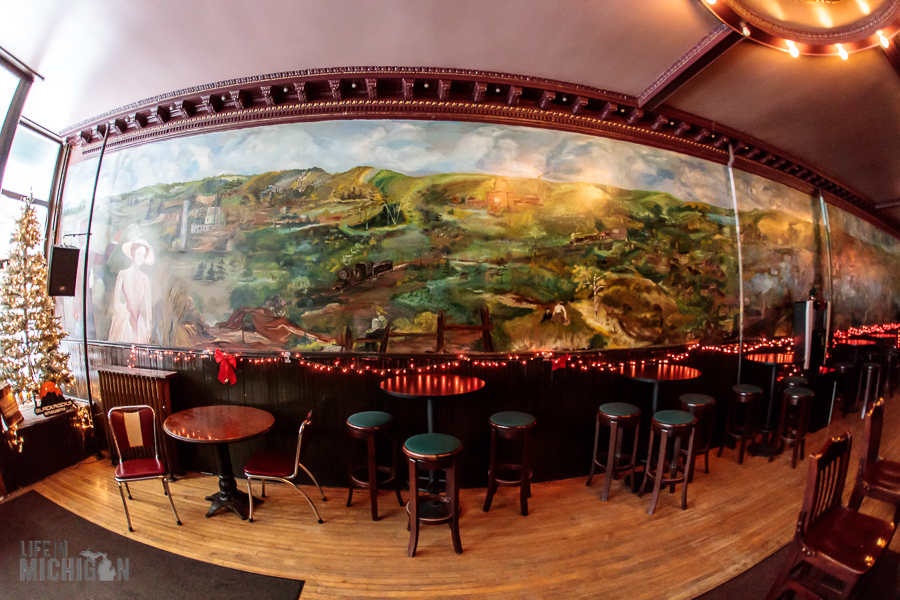 When we exited Shute’s Saloon, we were greeted by old man winter and he was in a mood. That evening the weather forecast from the locals in the bar at the Fitz sounded grim. If we had planned to leave the Keweenaw before New Year’s Eve, we better get an early start. We didn’t argue. 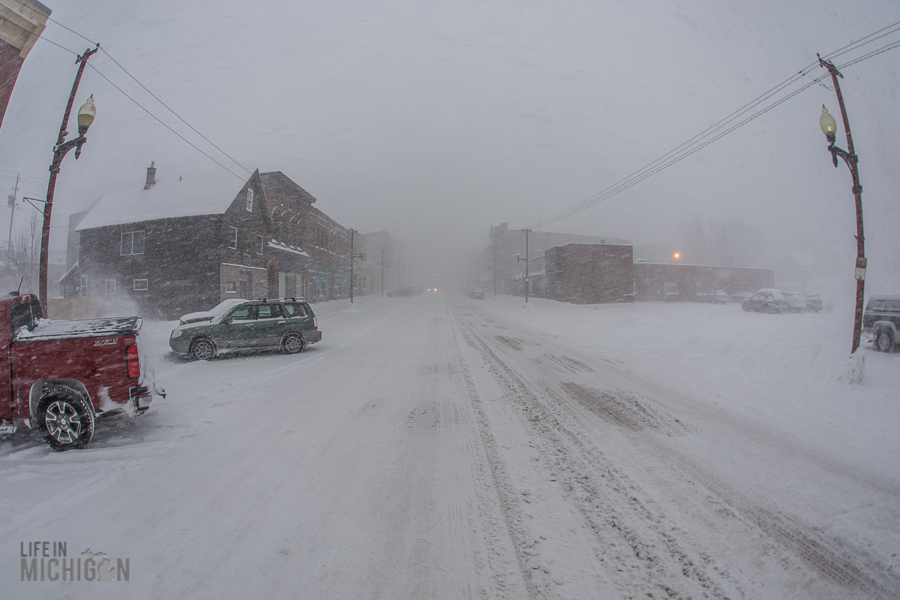 Our trip from Eagle River to Houghton was snowy but uneventful. The snow tornado in Marquette, well that is another story. Just as we entered Marquette we experienced our first white-out conditions. “It was nuttier than a fruitcake,” says Chuck. While we were trapped behind a stopped semitrailer, which had stopped for a car that had spun-out, a truck whipped past us on the shoulder and another car slid to a stop behind us, Chuck yelled, “Is anyone getting this on their camera?” Always the photographer. No, we didn’t capture that special moment, but I did stick my head out the window to be sure the traffic was clear so we could pull around the stopped semi to avoid being smooshed like an accordion. I couldn’t actually see anything because the snow was blinding and felt like stinging needles, but I yelled back, “All clear!” 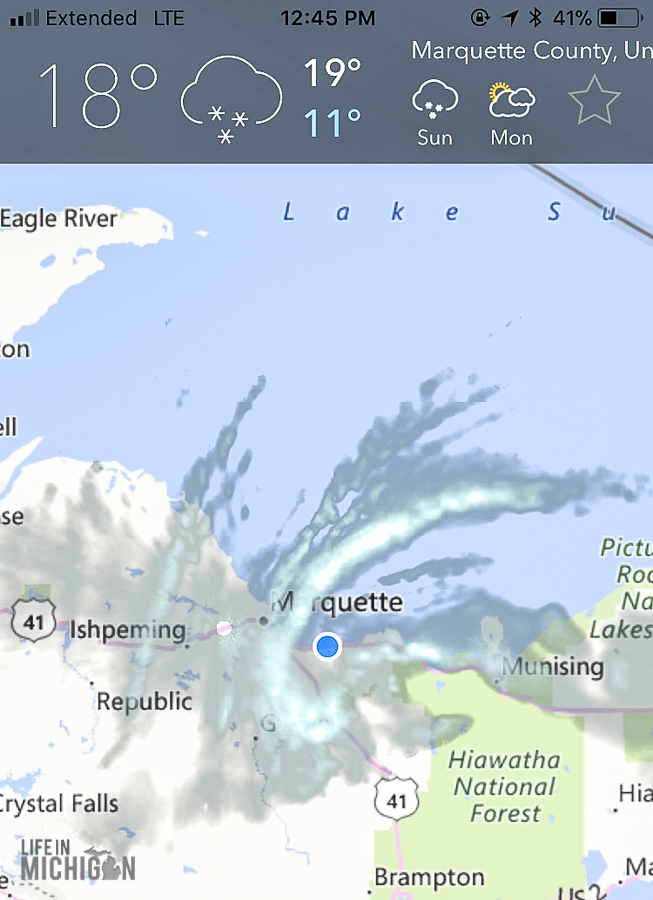 “Why were we in the Keweenaw Peninsula in December?” Because you can eat a cinnamon bun the size of your head. Because you can sleep just feet from the shore of Lake Superior. But most important, because you can experience a touch of magic. Thankfully, we made it across the bridge and to the Bay View Inn safely. We have more pictures in  our galleries of our UP Winter Vacation and the Bay View Inn in Petoskey where we celebrated New Years Eve.

We hope you enjoyed our stories from UP Winter Vacation. If you enjoyed it, then share it on your favorite social media venue or send it as a link to your friends and family. This is good for everyone!