The 2021 U.P. Beer Festival was back in Marquette, Michigan on September 11th. Our cups were overflowing with beer and pure joy to be with our friends. 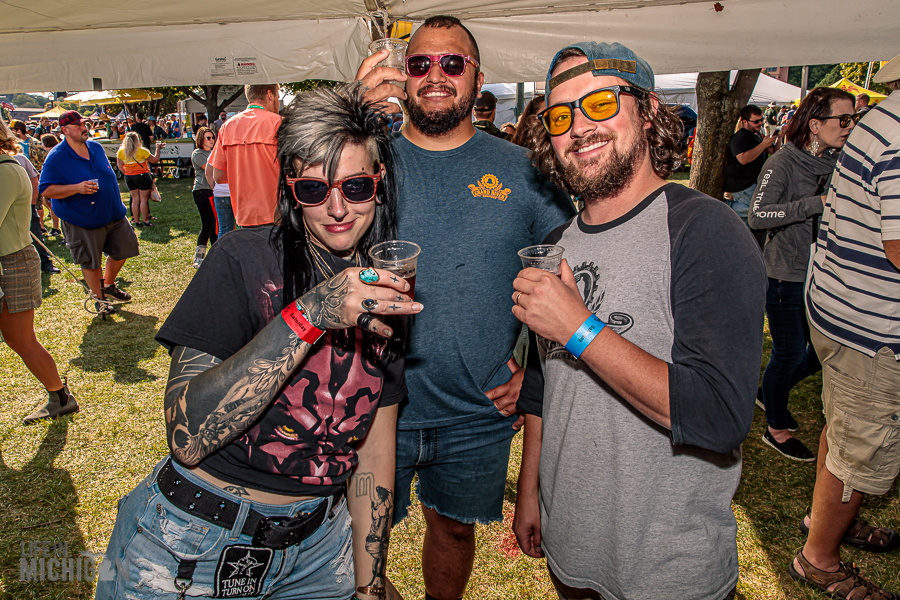 Chuck said, “I feel giddy.” And that was before his first beer at the 2021 U.P. Beer Festival. He wasn’t the only giddy Michigan Beer enthusiast in attendance. Throughout the day, I heard so many people say, “I missed this. I missed my friends.”

That giddy feeling has a name and it isn’t the buzz from the beer. Scholars call it “Collective Effervescence.” It is used to describe the energy felt when people come together around a shared purpose. Chuck just calls it giddy.

Grand River Brewing was definitely spreading around the collective effervescence. Seriously after just one of their “Dead Man’s Hand: Turtles” I was feeling more than just a little giddy. Several beer enthusiasts suggested I try Grand River’s Turtle. Pretty soon, I kept hearing “Hey did you try the Turtle?” All of the Grand River’s beers are good but the Imperial Stout was something to write home about. 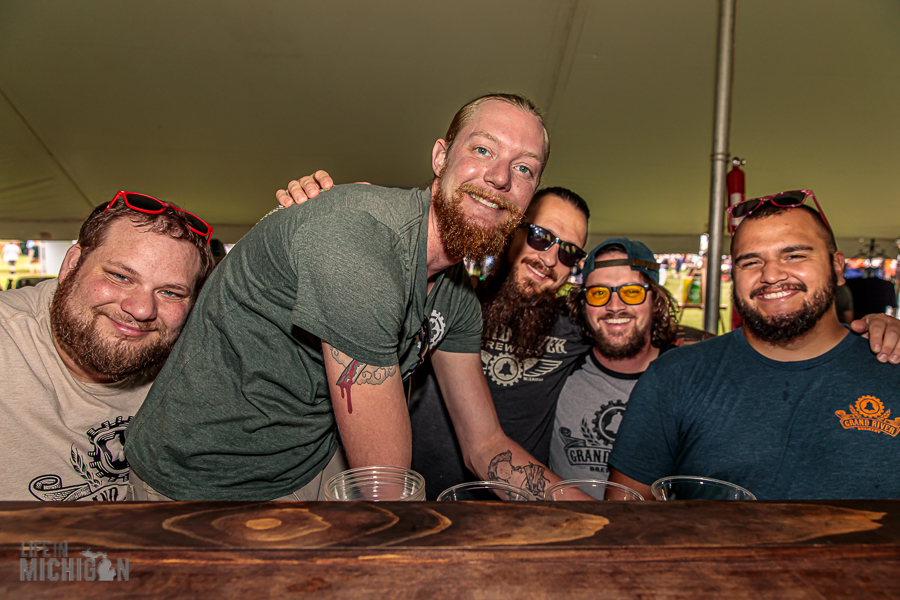 Jay Green from Perrin Brewing Company posted online a few days before the beer festival they needed volunteers to pour. I quickly said, “Jay, pick me.” “I got you,” Jay replied. When I arrived and asked when he wanted me to pour, he replied “just hang out with us. I’ve missed my friends.” LOL, I’m either super fun to hang out with or terrible at pouring beer. Jay was giddy too. 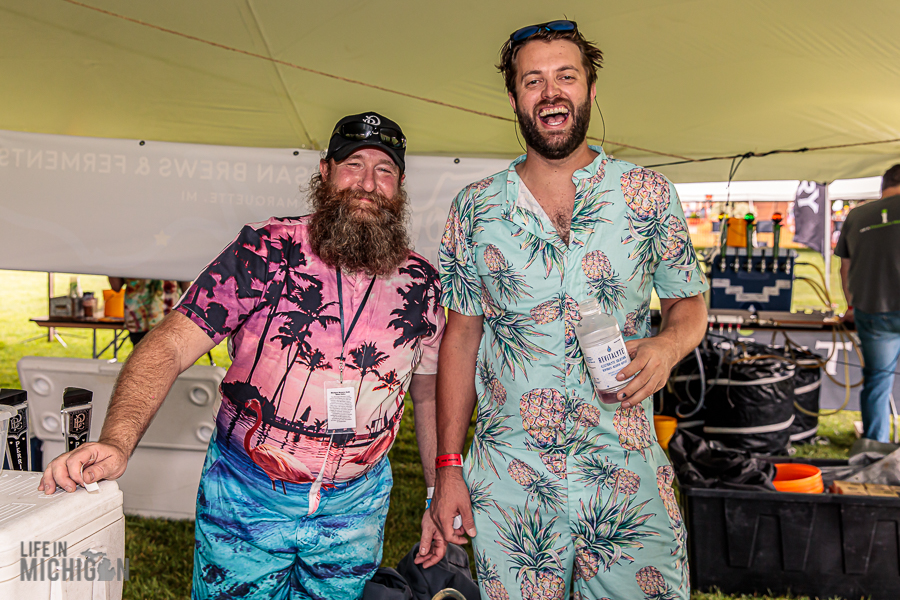 It was Perrin’s first U.P. Beer Festival. The lines were long and they ran out of beer, so hopefully, this means they’ll be back next year. I’m sure having No Rules on tap may have had something to do with the line. Not familiar with it, “NO RULES were followed throughout the creation of this product. This gigantic 15% Imperial Porter is deceptively smooth and subtly sweet with layers of flavor that never seem to end. Some say it tastes like a Mounds candy bar that’s been dipped over and over again in rich chocolate and soaked in bourbon. Other people find flavors of coconut, cinnamon, toffee, vanilla, and coffee — and they would also be correct. This beer is special and there’s a reason why it was named as the top beer in the World.”

We ran into Adam Engelman helping Cheboygan Brewing. The first thing he said was I can’t believe it’s been 2 years. I’m pretty sure he was feeling that same giddy feeling that Chuck had. While visiting with Adam, we tried the Treelove session IPA. A great easy drinking IPA that is perfect for catching up with friends. 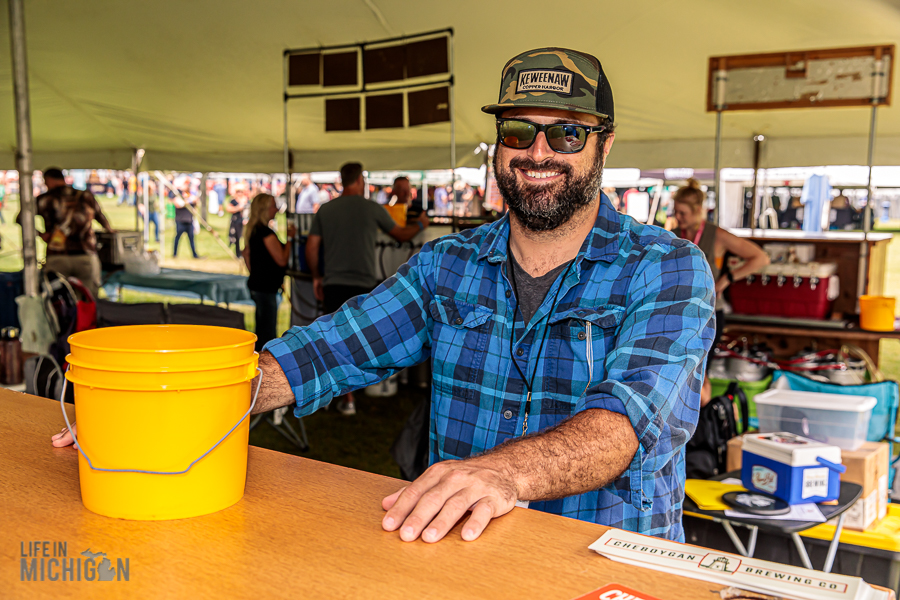 This year we stayed directly across the street from Blackrocks Brewing because we wanted easy access to their beer garden. (And we didn’t want to have to deal with the hill either!)  When we arrived on Thursday, Andy was making some music in the garden. It was a perfect way to start the beer festival. Needless to say we enjoyed a MyKiss or two while we were in Marquette. 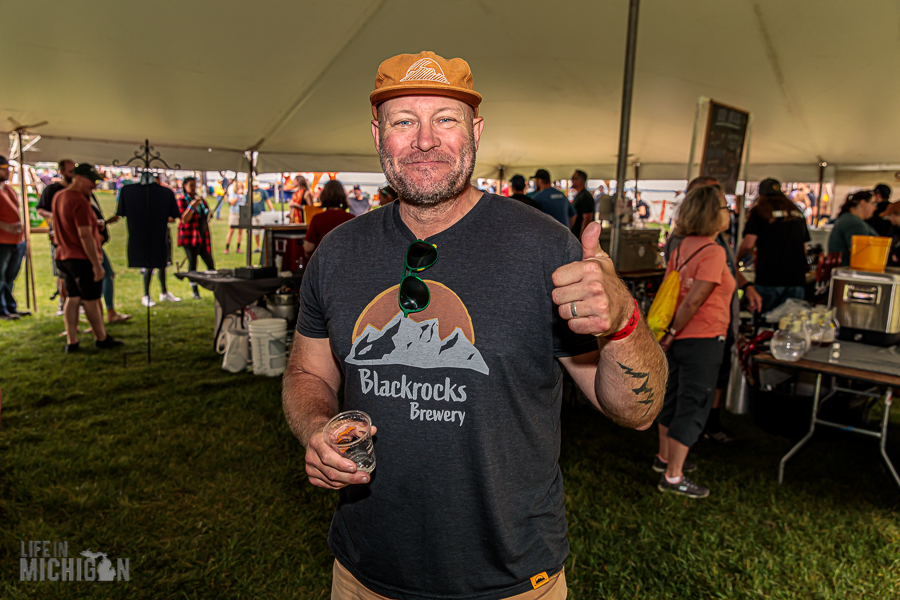 Cognition Brewing just had swag for sale this year. We got a peek at the new name! They’ve got exciting news coming soon. If you’ve stopped their website you’ll see a temporary closure sign. Do no fear they’ll be back! The Cog lives! 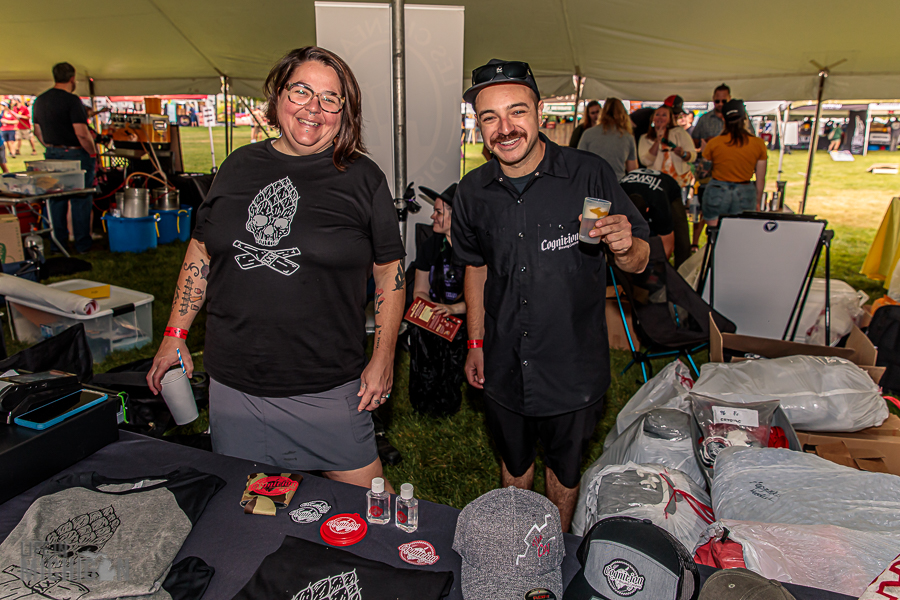 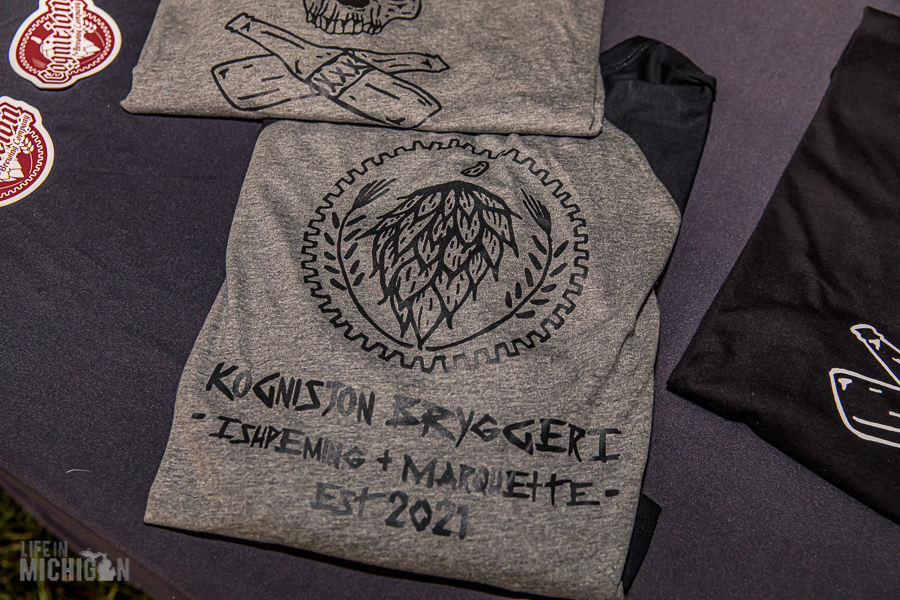 Raven Brewing & BBQ was new to us but they’ve been around for a few years. They were one of the last beers we opted for “Fresh Start” which you’d think with a name like that it would be an “easy drinker”. It was full of taste and wasn’t exactly a low octane beer at 9.8%. Chuck gave it a big two thumbs up. 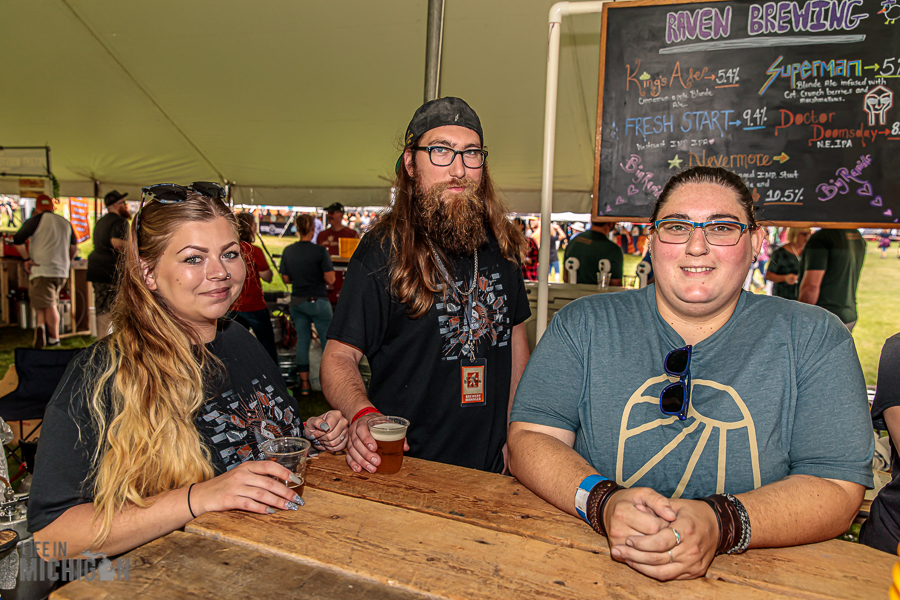 Chuck had a list and 51st State Brewing Company was on it. It took me a minute to find them, they are on the “wild west”ern side of the U.P. Their delicious sweet GC-4A Glider was like a tasty after-dinner dessert. 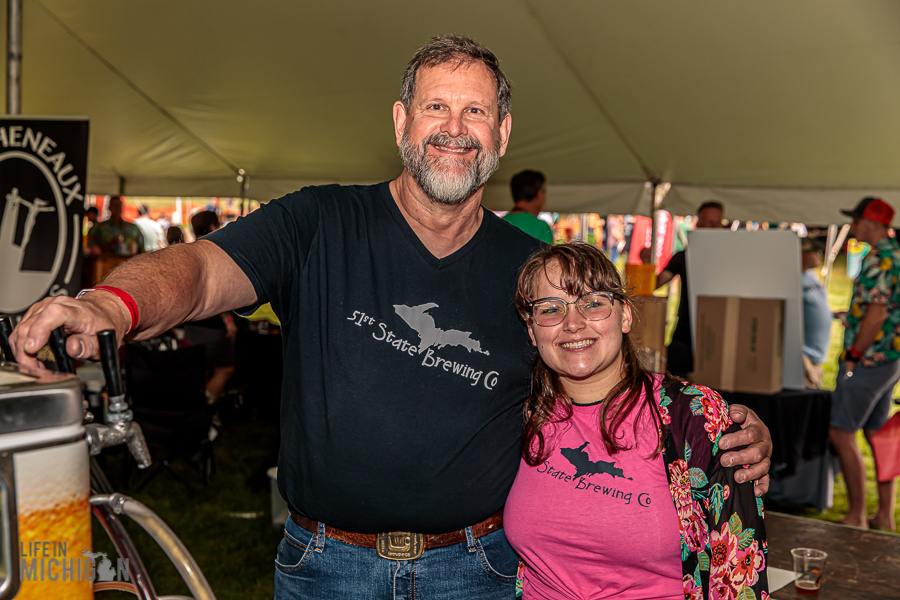 So I asked the brewer from Three Bridge Brewing what is the story with the name? I loved the story and thought I would share it with you!

They are located in Menominee. The southernmost tip of the upper peninsula.  They brought a few beers with them. I tried the “Flower Hunter” a double IPA. It was hoplicious. 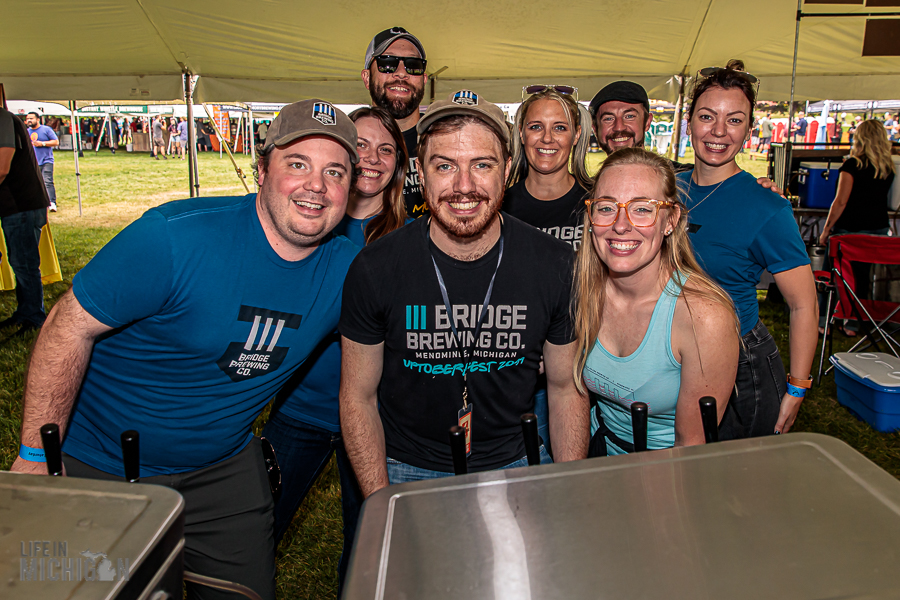 I’d not heard of Drifa Brewing Company before the festival.”It is Michigan’s first cooperative-owned craft brewery.” I’m not 100% sure I understand how to translate that statement. The good news, I know their beer is tasty. Chuck enjoyed a Belma’s Bodacious Bodega Juicy IPA which is a mouthful to say, but delicious to drink. When you are in Marquette next, stop by their taproom. 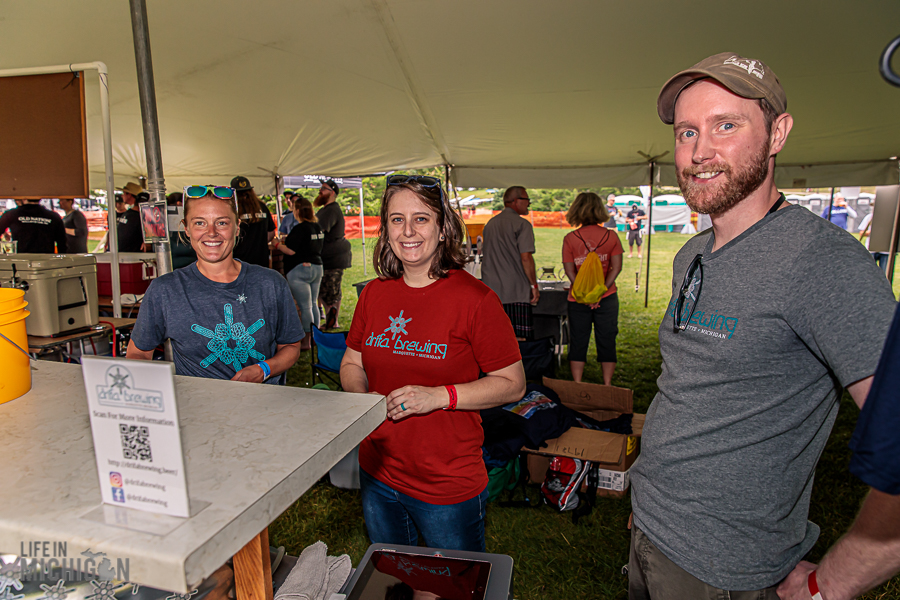 We discovered ByGeorge Brewing in Munising this past February when we were in town for the Michigan Ice Fest. We were looking for food and a beer and stumbled upon ByGeorge. They quenched our thirst with the Elephant Disco and the Driftwood Deli connected to the brewery filled our bellies with good food. They brought their Elephant Disco to the festival and it was as good as I remembered. 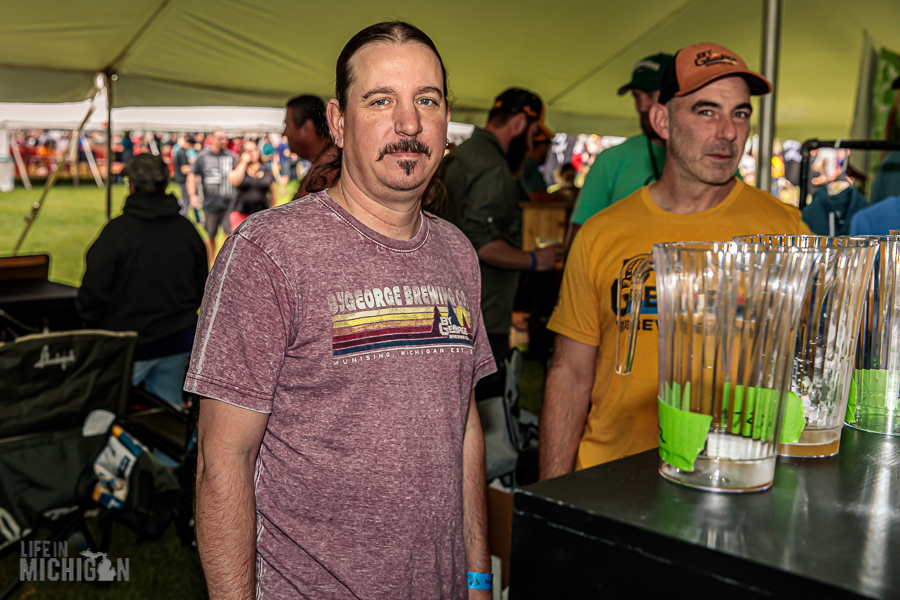 You may read the phrase “jam band” and think of hanging out in the park playing frisbee or hacky sack while smoking a fatty. Sure, that works. But those silky smooth grooving jams from Ann Arbor’s own Pajamas work equally well while chilling out at the 2021 U.P. Beer Festival with Belma’s Bodacious Bodega Juicy IPA from Drifa Brewing. 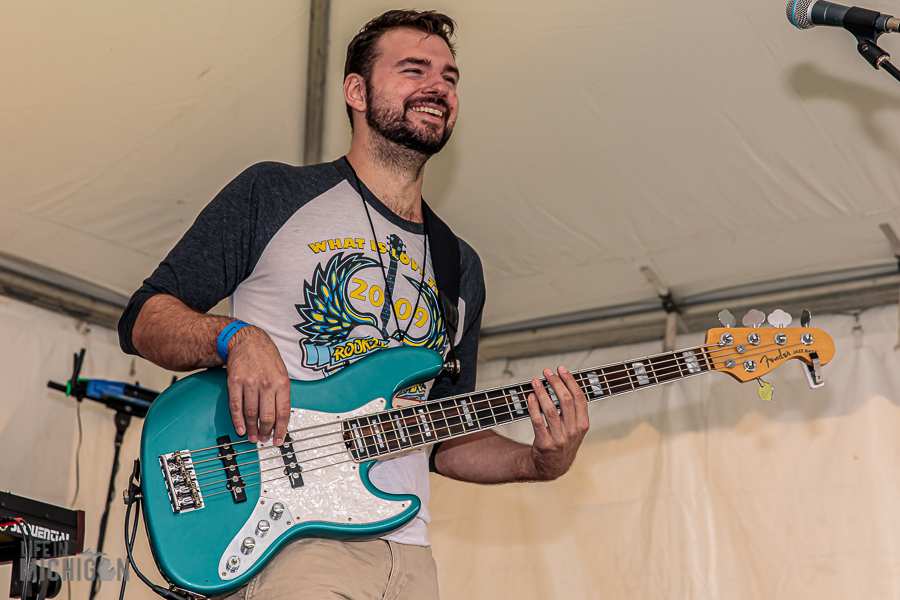 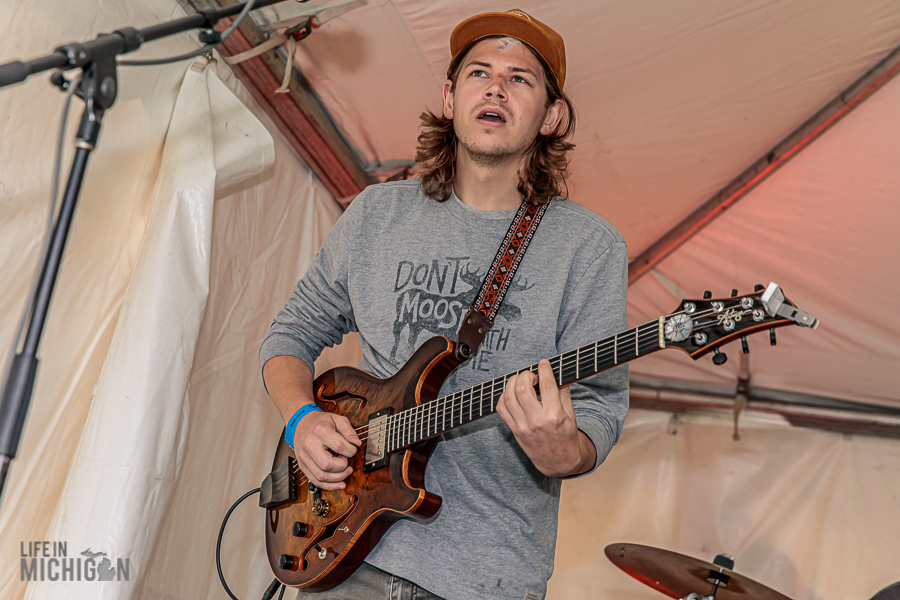 Pajamas added to the effervescence of this beautiful day down by the water in Marquette. These guys make their jams with just the right amount of sweet soul and chunky vibes. I thought of the Dead hanging out with Stevie Wonder lounging in their pj’s eating a PB&J with George Clinton. Can you dig it? All right, all right, all right. 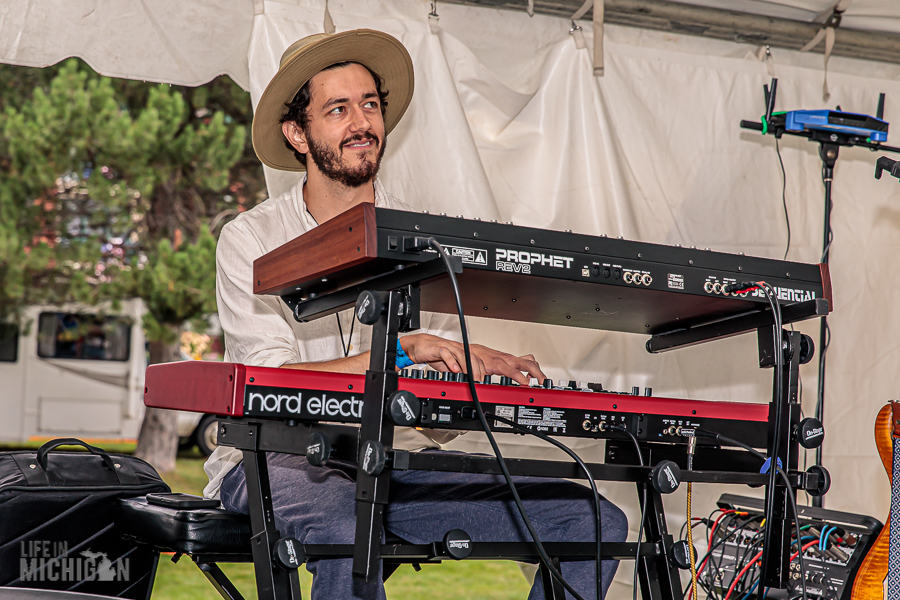 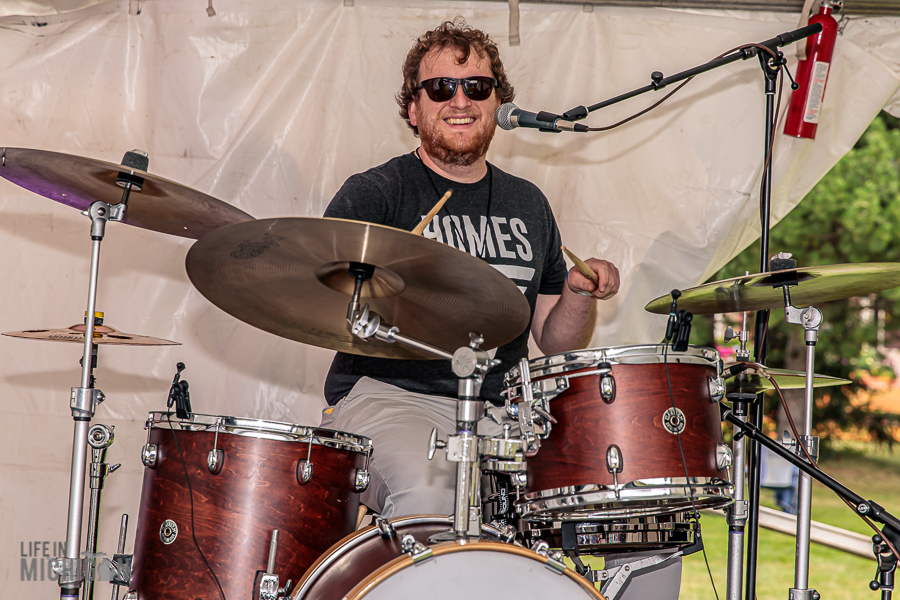 Popping up in various locations at the 2021 U.P. Beer Festival is Marquette’s own WhoDat Brass. The word “brass” sounds harsh, but these guys play music that is soaking up the sun with swing. Once again that fizzy fresh tingle of being at this festival was stoked by WhoDat’s breezy music. They pair well with a beer that has a little kick in the pants. I’d recommend enjoying their jams with a Choctopus Imperial stout from ByGeorge Brewing. 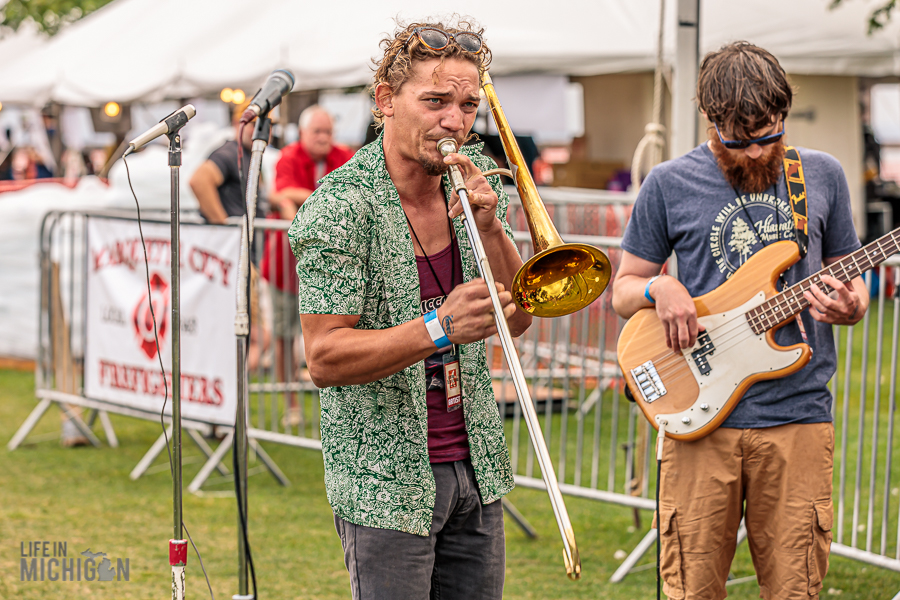 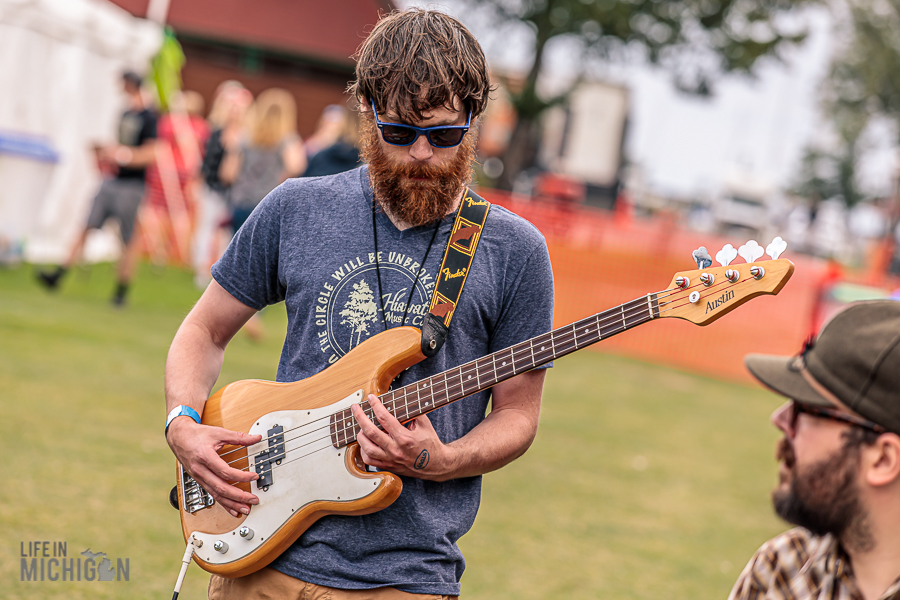 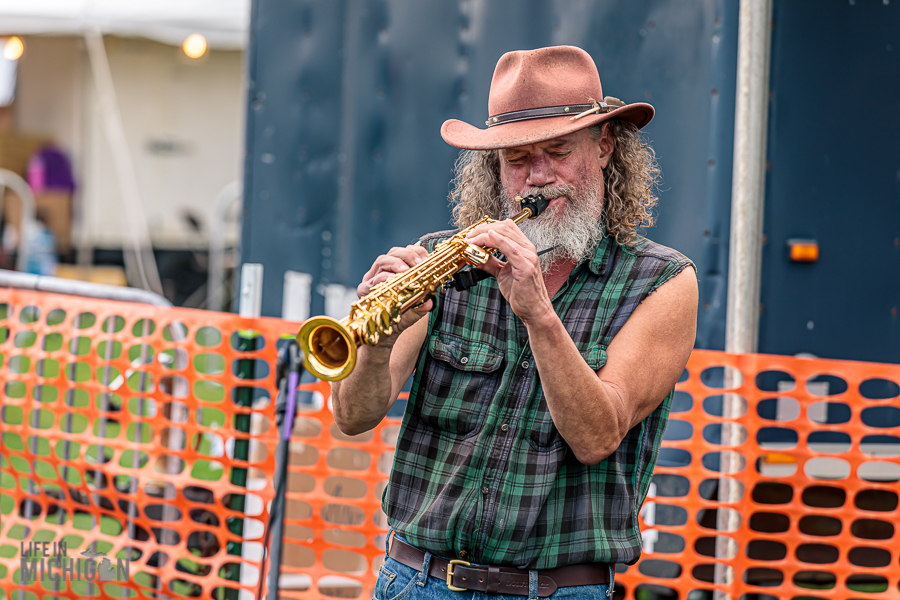 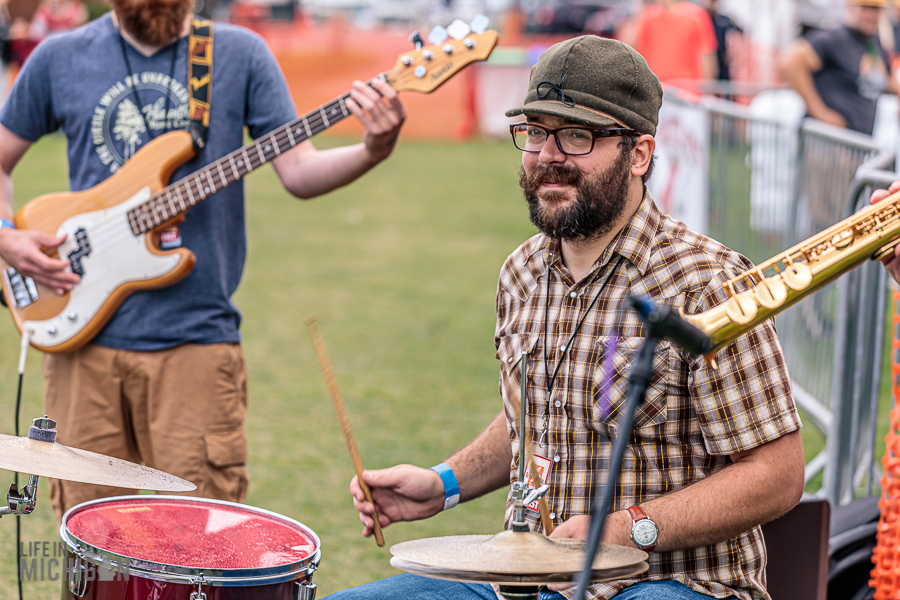 Tribute to the 20th Anniversary of September 11th

In a moving tribute to those we lost 20 years ago on 9/11, a single piper from the Superior Pipes & Drums played “Amazing Grace” as a procession of squad cars rolled by the festival grounds. Local fire and police as well as Michigan State police attended with lights flashing. They ended with short siren wails. It is hard to believe that 20 years have passed. 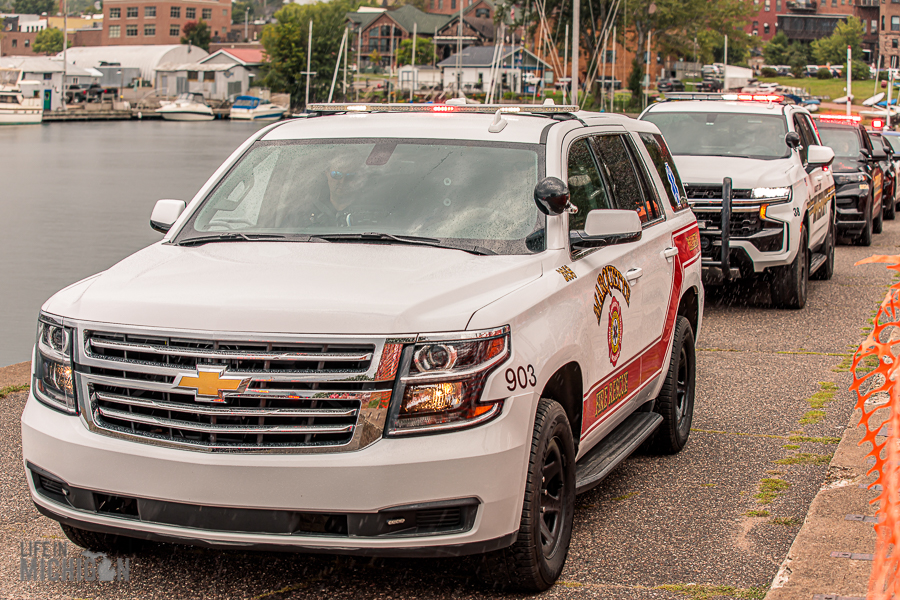 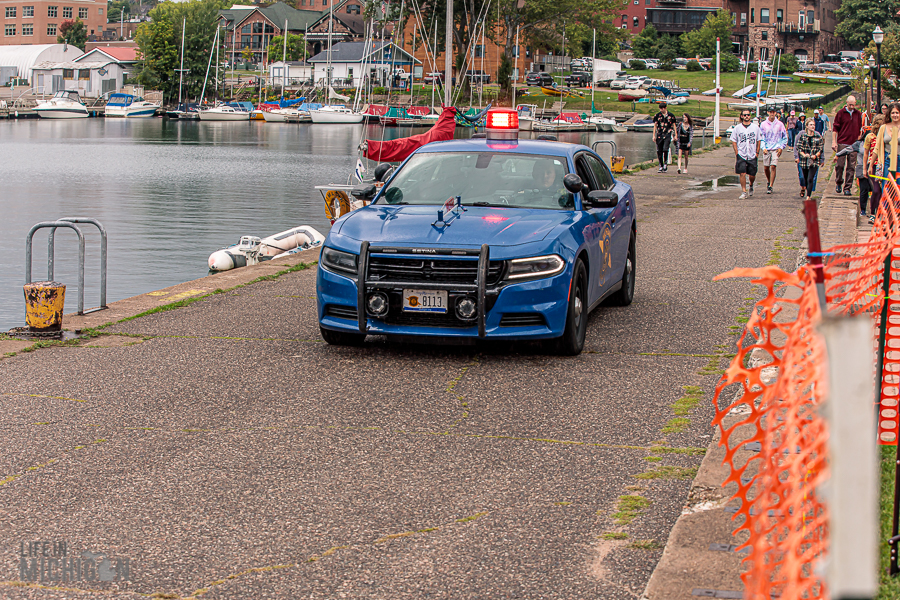 Ya’ll know Fred Bueltmann right?  The Beervangelist. Pretty sure he has something to do with This Craft Nation. We are strolling along and Chuck says, “Hey Fred wants to interview me at 4, don’t let me forget.” Shocked, I stammered “What? Why?” Chuck shrugged and replied, “I don’t know I guess we will find out.” I heard bits and pieces of the interview float to where I was sitting a safe distance away. I heard things like “I was just chucking around” and “I took pictures at his wedding.”  Chuck’s hands did a fair amount of gesticulating in the air. We were 4 hours into a beer festival, it should be interesting to hear what secrets he shared. 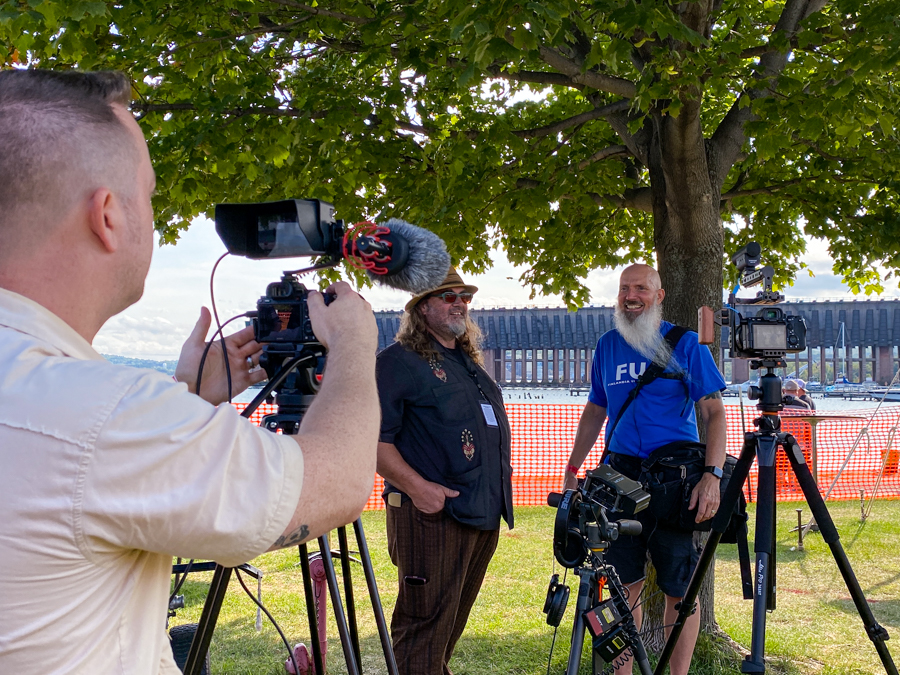 Jenna Smith, Marquette’s mayor had the honor of tapping the firkin this year. Mayor Smith hammered the tap home and we enjoyed some delicious Ore Dock Brewing beer. 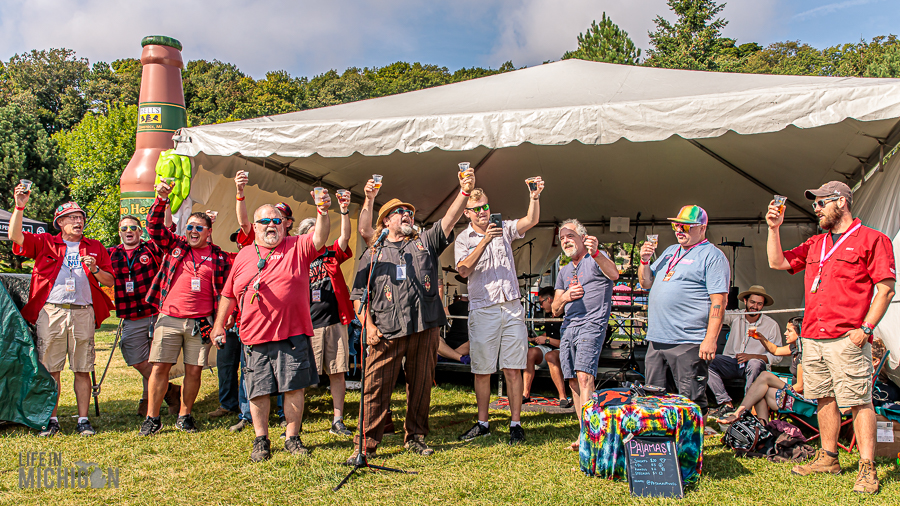 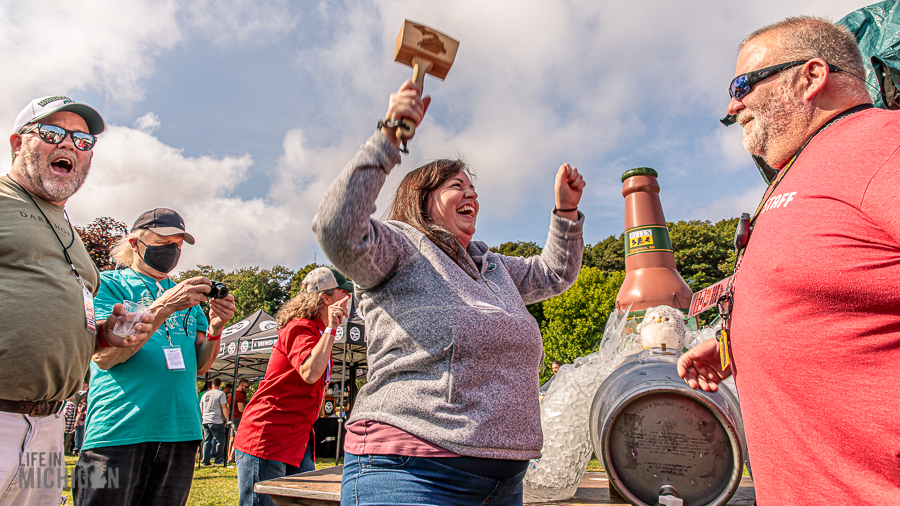 We’ve got a gallery full of photos from the 2021 U.P. Beer Festival. Drop us a comment if you were there. What part of the festival did you enjoy most? 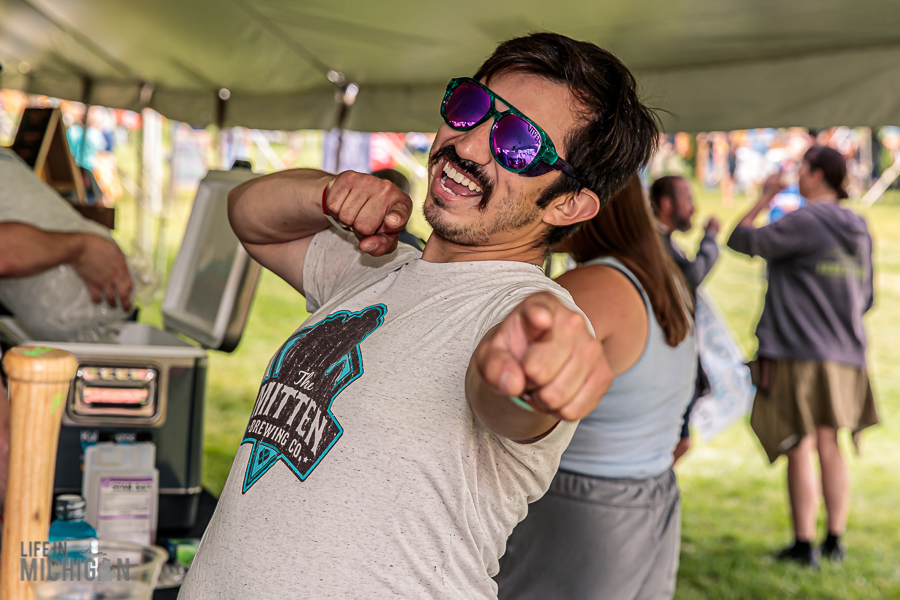 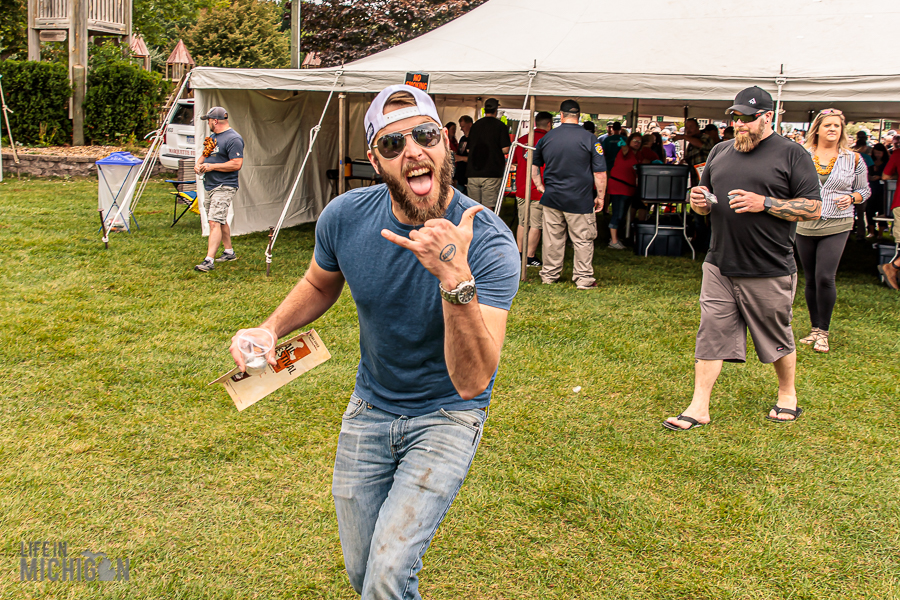 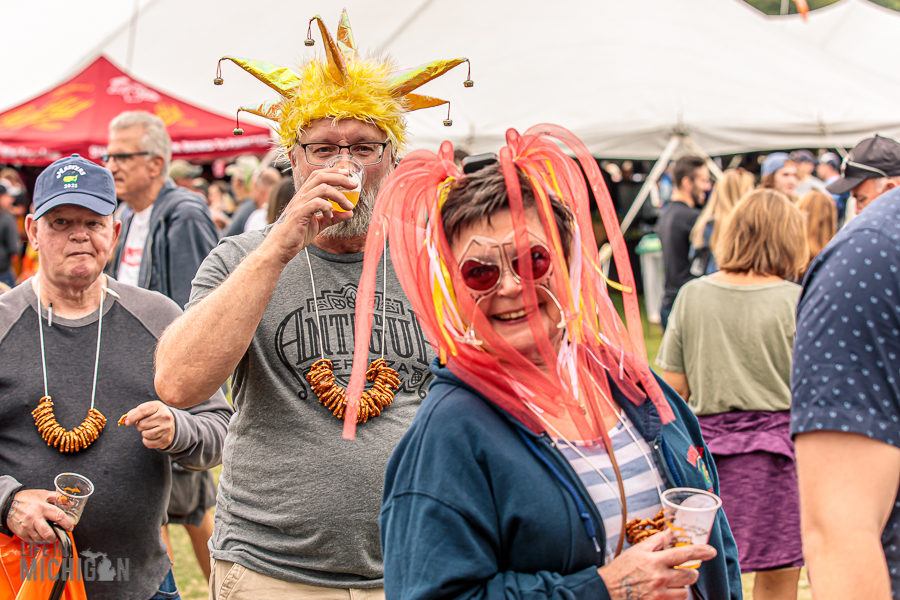 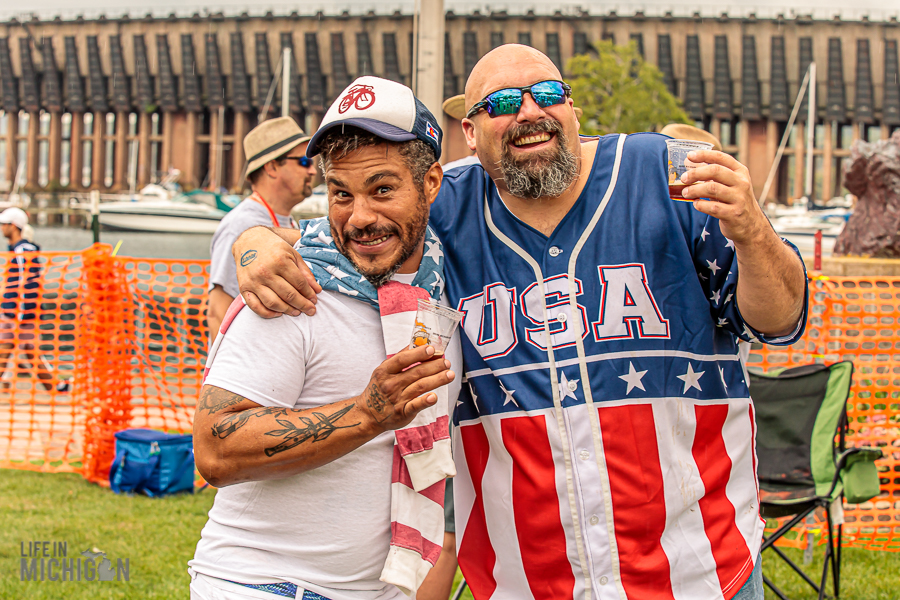