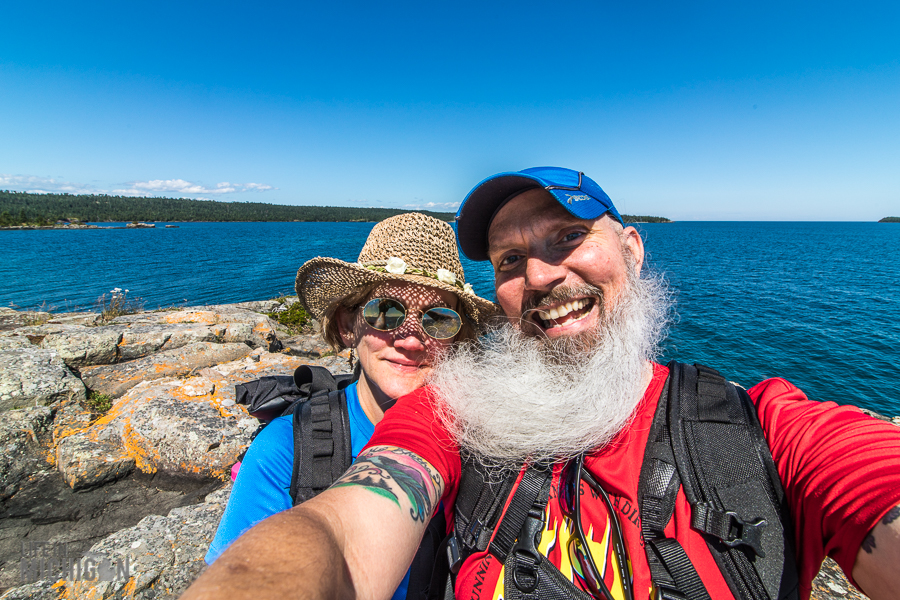 We launched our visit to Isle Royale from Cooper Harbor, the tip of the Keweenaw Peninsula aboard the Isle Royale Queen IV. In the weeks prior to the trip, I’d fretted about waves. It was unnecessary. Lake Superior welcomed us with calm water, a little fog in the air and blue skies. During the three hour crossing, the Queen’s passengers played cards, slept or read. We arrived at Rock Harbor on time. A National Park Ranger greeted us and provided everyone with an orientation which included what to do if you encounter a moose. The Ranger also mentioned several reference books available for purchase at the ranger station. We purchased “Isle Royale National Park – Foot Trails & Water Routes” by Jim DuFresne. While we were getting oriented and checked in, staff from the Rock Harbor Lodge took our bags from the boat up to our rooms. Talk about service. 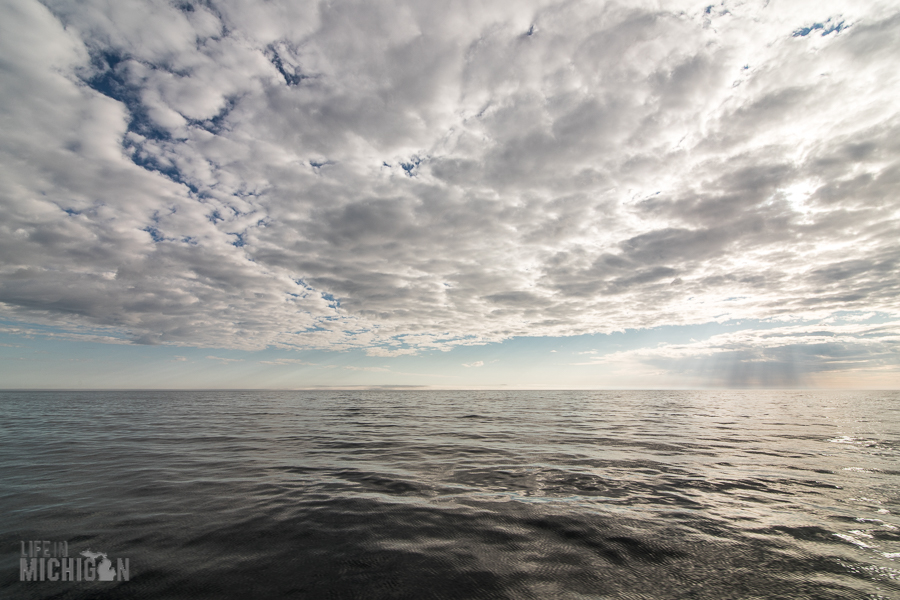 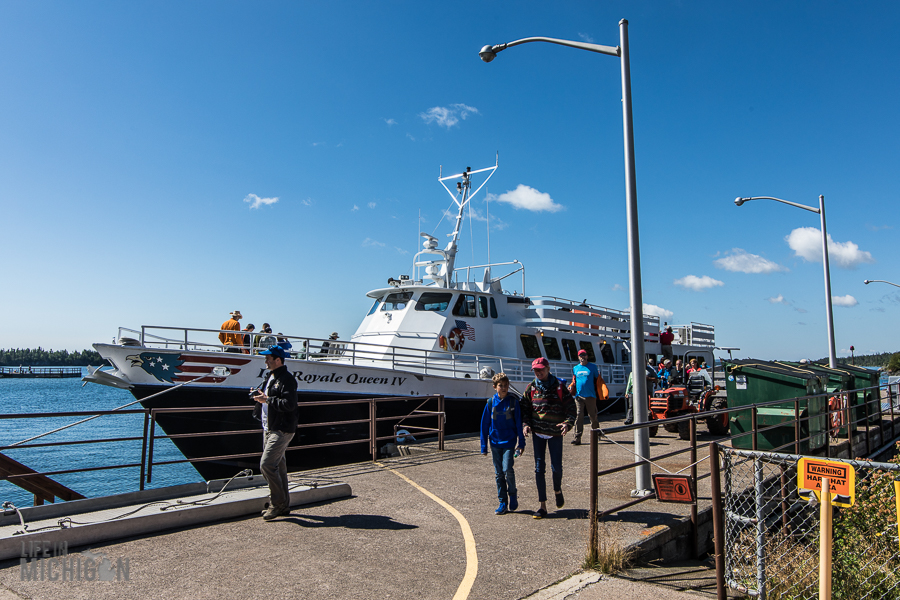 To get our Island Legs, we hiked the Stoll Trail to Scoville Point. It is a short 4.2 mile loop and the trail head was right outside of our room at the lodge. Plus, we’d learned during our ranger orientation it was ranked by Backpacker Magazine as one of the best 100 miles of trail in the whole national park system. Our trail book had this to say about Stoll trail:

The point is named after an 1840’s copper prospector and is a mix of craggy rock shoreline, juniper bushes and a few scraggly pines.

Thirty minutes into the hike, I took a side trail to a plaque looking over Lake Superior. Chuck was only a little behind. I skimmed the plaque and looked up to see two individuals sitting on a bench overlooking Lake Superior in various stages of undress. 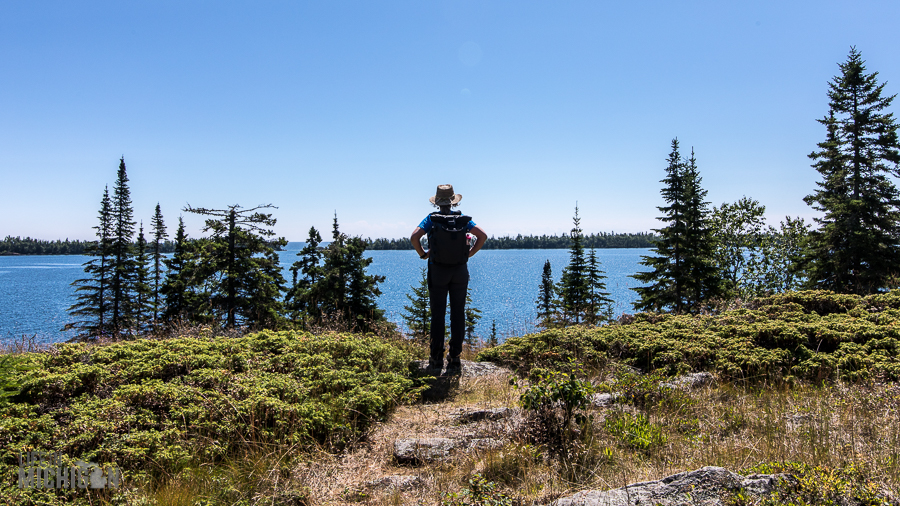 Like a tree, I was rooted to the spot. Chuck took one quick glance and fled up the trail. Yes, when we were out of earshot, we burst into laughter. It wasn’t so funny when we encountered the couple on the trail later in the day. I could see them ahead of us on the trail consulting a map. I said to Chuck without any sound, using an exaggerated facial expression and pointing my finger, “It’s them!” We all averted eye contact and hurried in different directions. 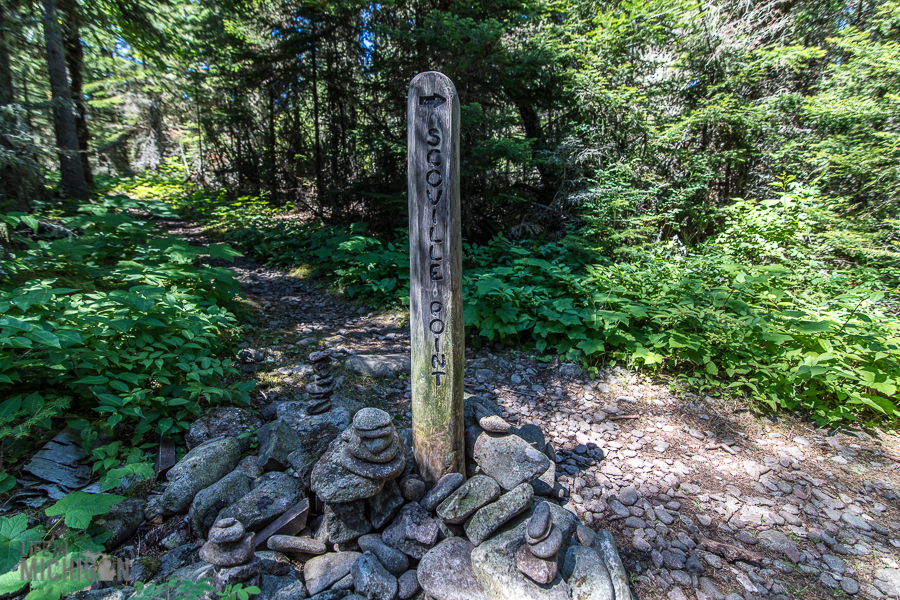 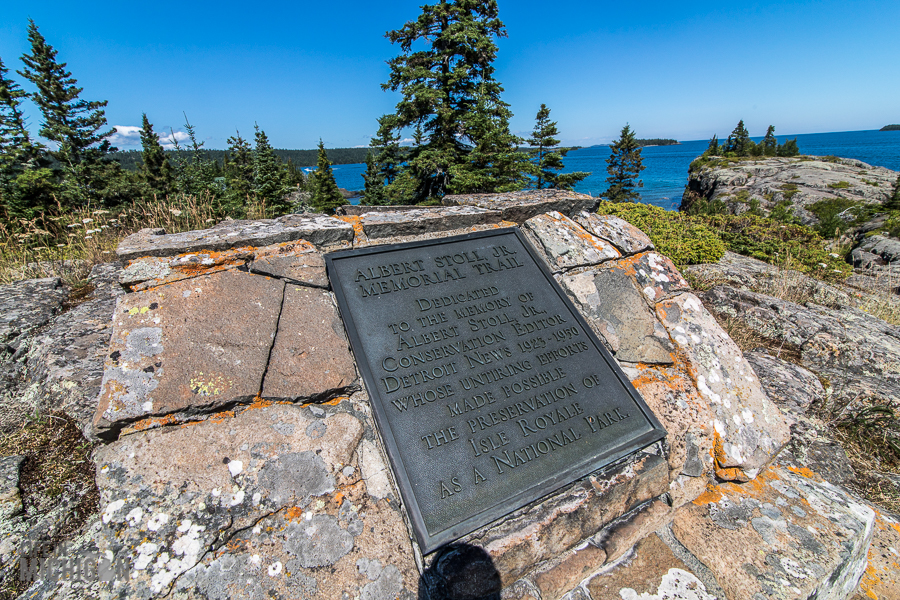 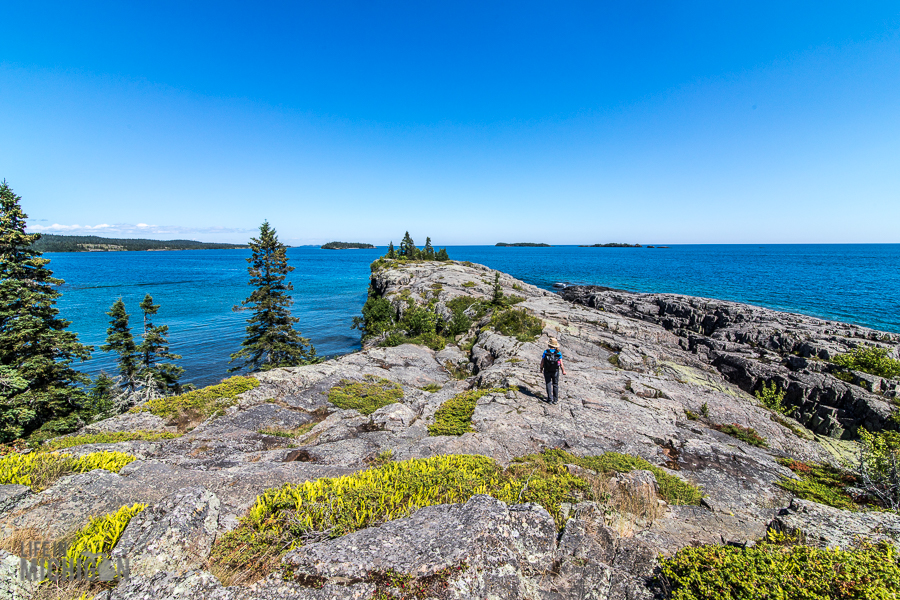 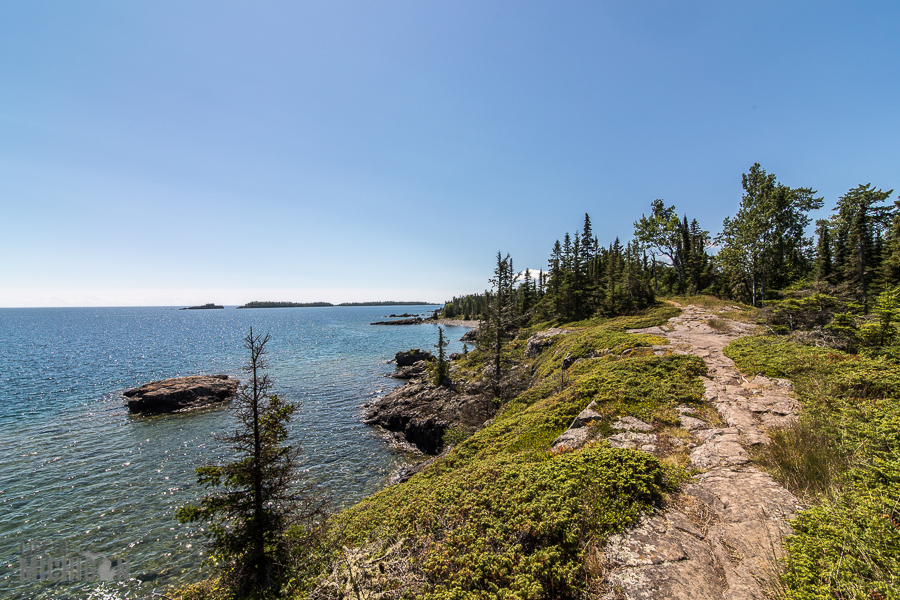 After connecting with a slice of internet and a delicious breakfast, we consulted with the harbor master (aka the guy in charge of renting the kayak and canoes). After sizing us up, he gently suggested we wait an hour and look at the waves in Tobin Harbor. There was a strong headwind. If we were really confident, he would gladly rent us a kayak. Since we weren’t gushing confidence, he suggested we think about it.

While considering our options, we encountered a young man covered in mud and chugging a Keweenaw Brewing Level 92 Black IPA by the camp store. Keep in mind it was only 9 am. For his growing audience, he fanned his hands and placed them on either side of his head to mimic horns and said, “the moose is ¼ mile up that trail in the swamp!” We tried not to run, but we may have jogged just a little. We stayed well away from Bullwinkle and watched as he sauntered down the trail. 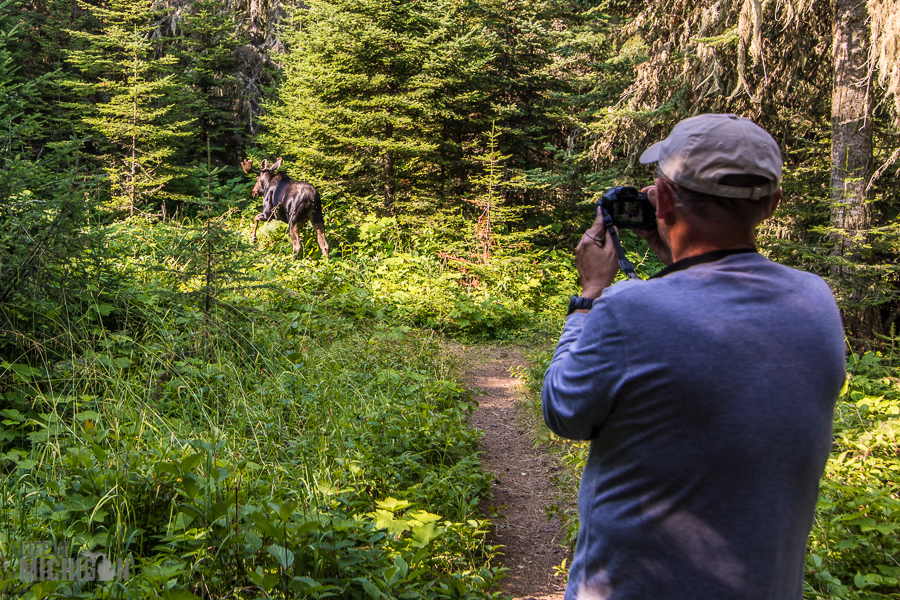 After the moose encounter, we hiked to Suzy’s Cave and pushed kayaking on Lake Gitche Gumee to the afternoon. The hike to Suzy’s Cave is a 3.8 mile loop and is a popular spot along the Rock Harbor Trail. I’ve read several stories about the cave and all have a common theme; a young girl by the name of Suzy found it. Go figure. What she did there and why vary.

Now this is a true story. On a Lake Superior island, in a cave over a mile away from the lodge Chuck runs into someone who knows him. I’ll admit, she knew him tangentially, but still. She is a U-M retiree and Chuck sees her sister in a meeting every couple of weeks. (I tried not to roll my eyes.) 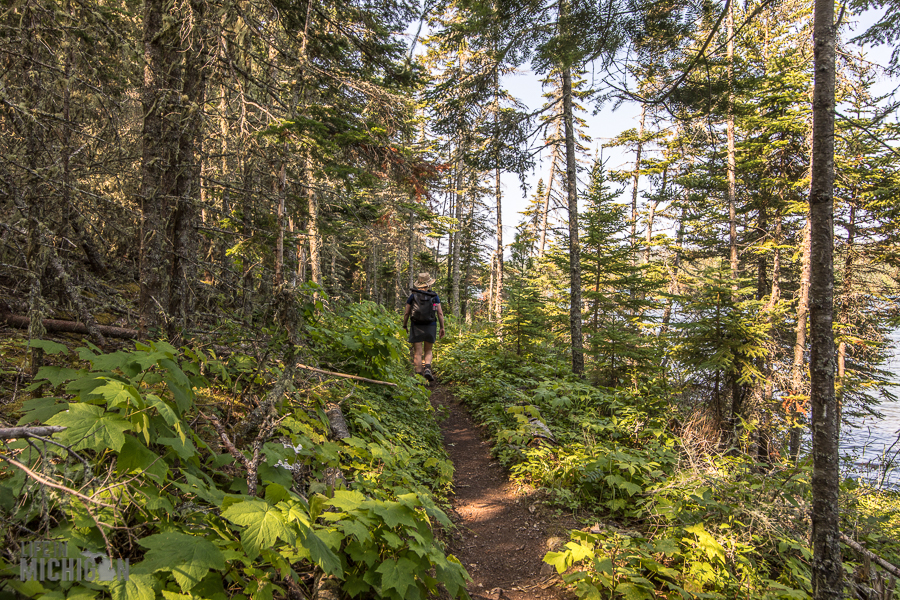 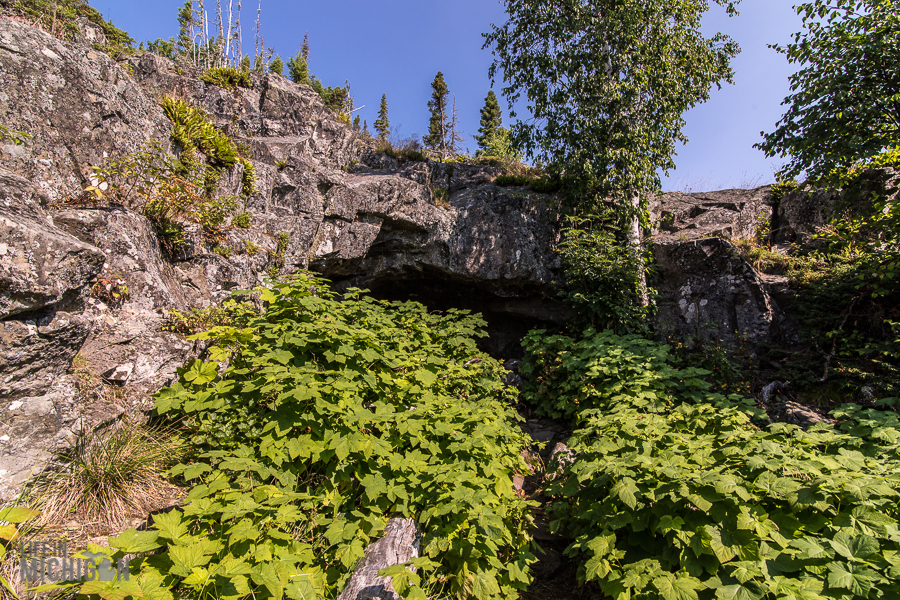 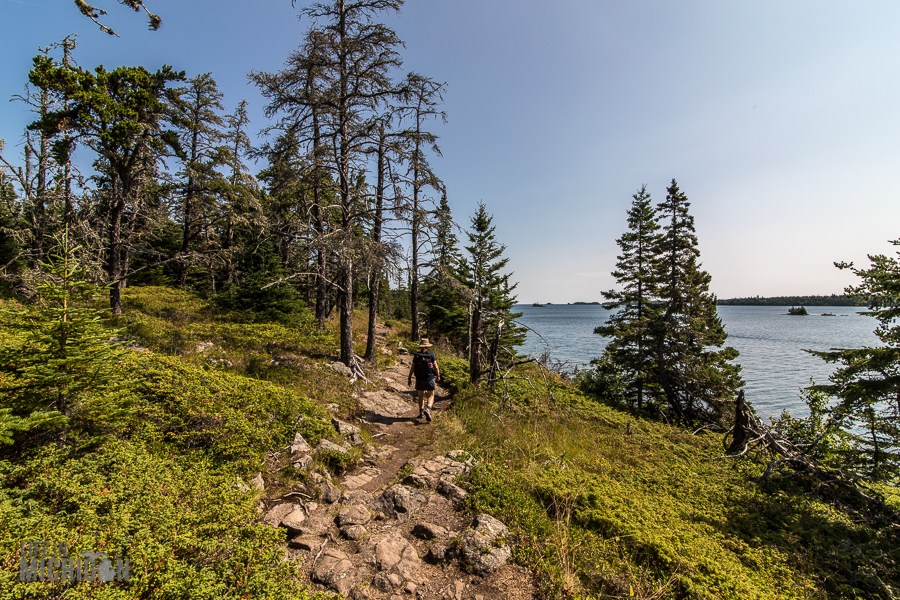 A supernatural power or old age intervened, we took a nap after our hike to Suzy’s Cave. We woke to thunder and rain hitting the deck outside our room. Can you imagine if we’d actually rented a kayak? My kids would have cringed with embarrassment if we were the couple that search and rescue was called to retrieve. It is good to know your limitations.

After our nap, we found a table at the Greenstone Grill, which was packed with rain soaked hikers. A family seated next us had just experienced a “Moose Encounter.” A young hiker of 8 or 9 years, shared with me his moose video and pictures. The restaurant was buzzing. All the patrons were hungry and jovial. It was lovely. 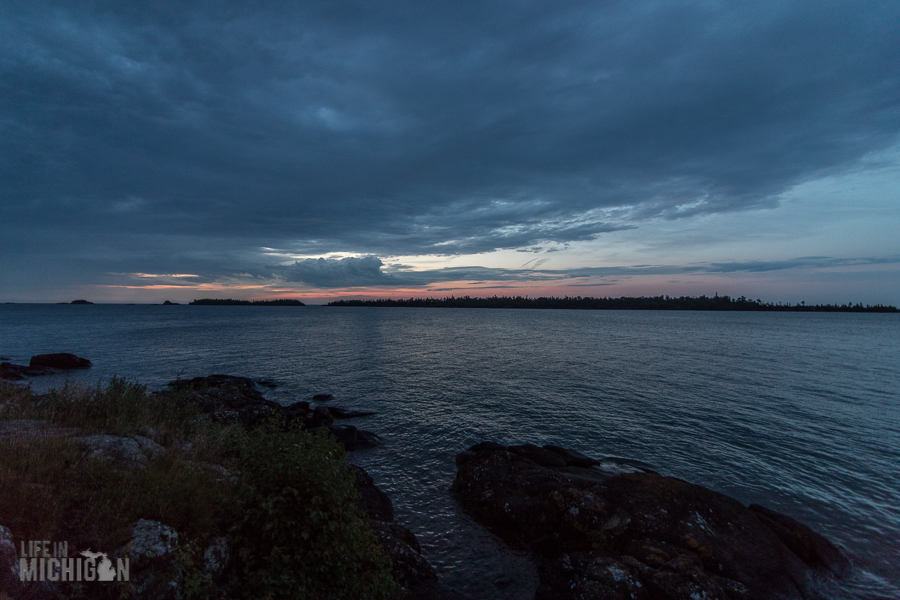 The sightseeing tours aboard the Sandy offered from Rock Harbor are a must. The Sandy is a sturdy boat with a seasoned crew. It is perfect for getting to the other side of the Island, if you are not confident in a kayak or canoe. Clearly, the Sandy tours were perfect for us. 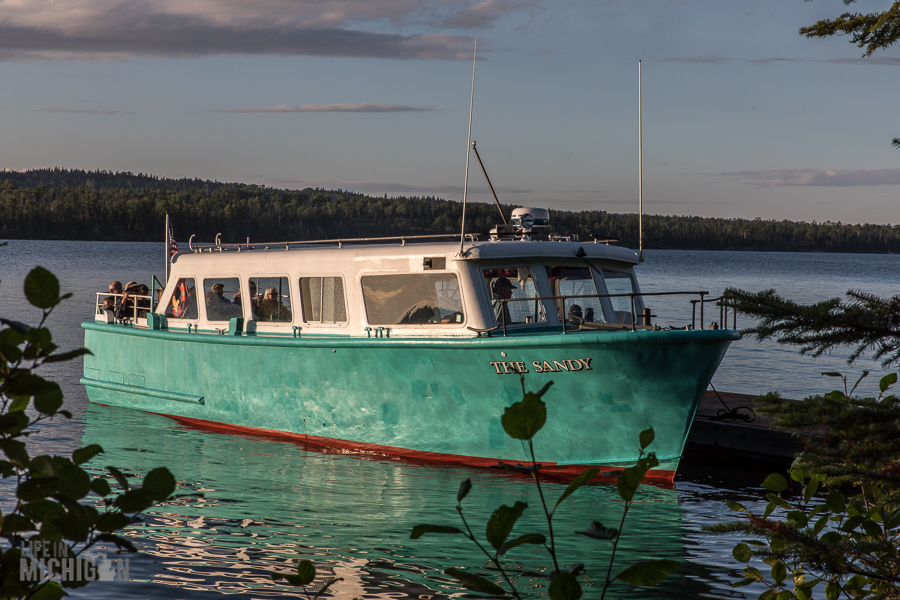 Our first Sandy Sightseeing Tour was to Hidden Lake and Lookout Louise with Ranger Chris. I promise you, there is a large bull moose standing on the other side of Hidden Lake. 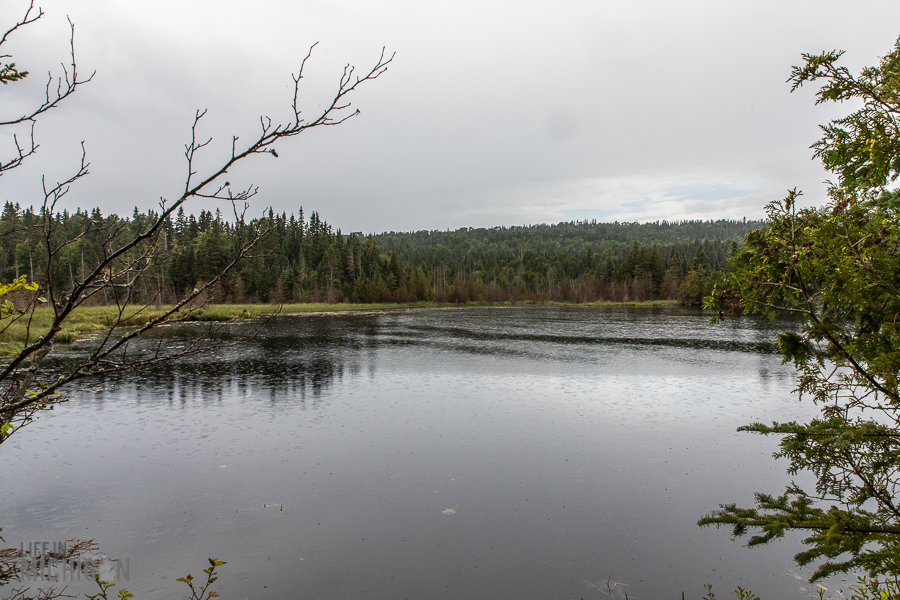 From Hidden Lake, Ranger Chris took us on a guided trek to Lookout Louise where we could see Isle Royale’s north side. 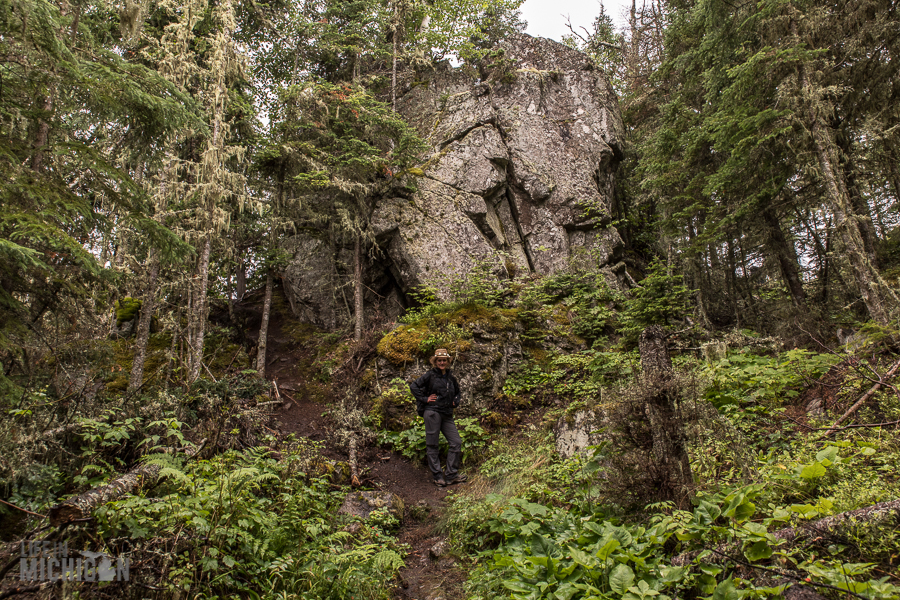 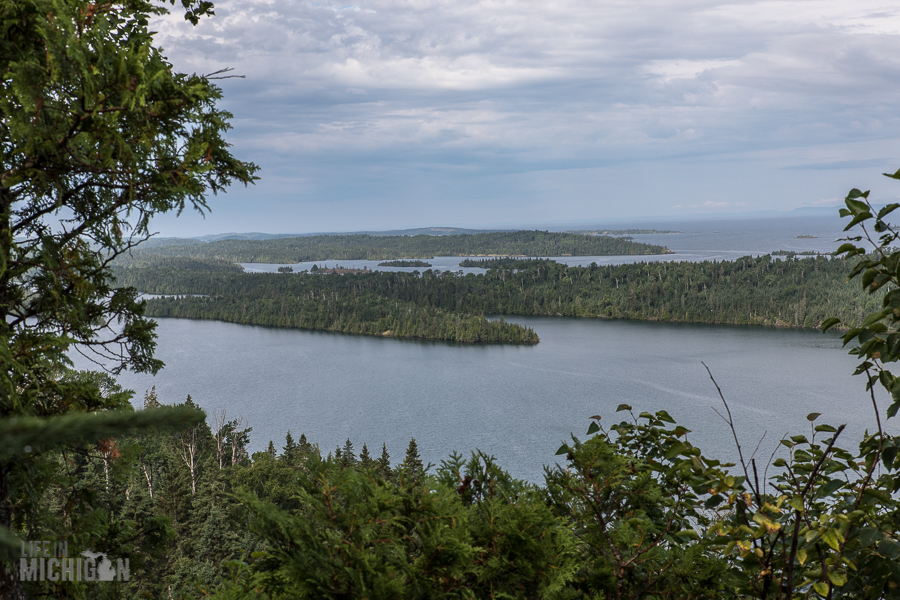 We opted to hike back to Rock Harbor along the Greenstone Ridge. It was about a 10 mile hike. Another couple from the Sandy Tour were doing the same. I kid you not, the four of us spent 5 minutes solving the mystery of the pole with the “P”.  We parted company not long after the “P” incident. Can you guess what this marker indicated? 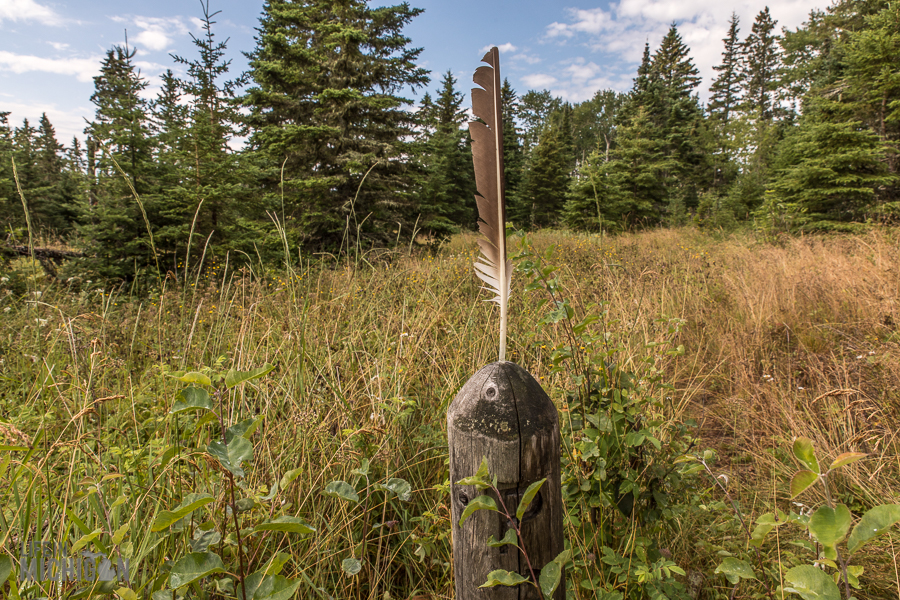 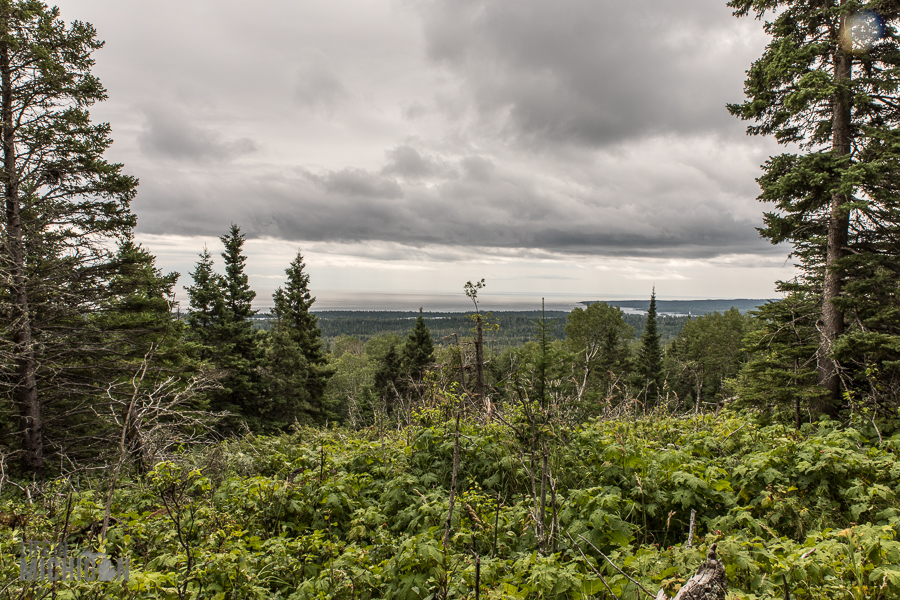 Another true story. I’m up to my eyeballs in juicy, red, Thimbleberries. They were falling on me and getting stuck in my hat. At times I tunneled through the bramble. At a break in the shrubbery, I say to Chuck, “Have you tried a Thimbleberry?” He said and this is a direct quote, “Yes, they are very tart!” The look on his faced said, “They are gross don’t eat.” So several miles later, when we’d cleared the Thimbleberry maze on Greenstone Ridge, Chuck says, “Oh, I tried another Thimbleberry. They are very good. I ate a bunch of them.” I’ll let you imagine the conversation that followed. I found one ripe Thimbleberry after we left Greenstone Ridge. Yes, it was very good. 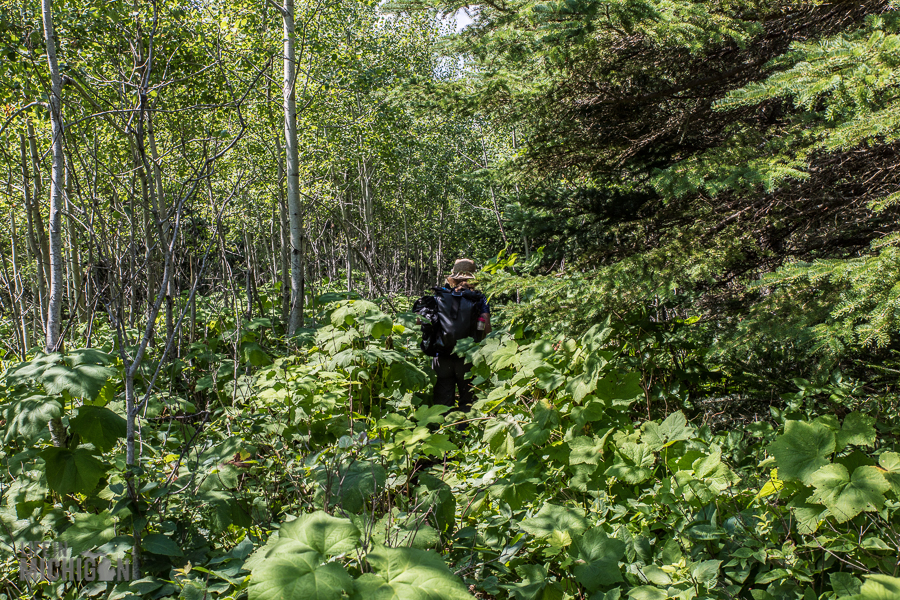 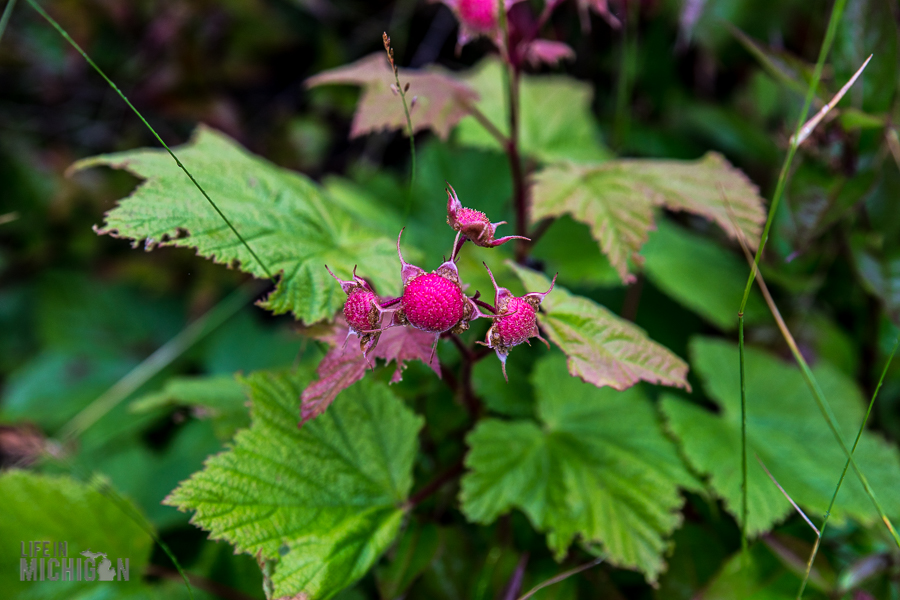 You can’t visit Isle Royale without hearing about Benjamin Franklin’s slight of hand. If folklore is true, when he’d heard about copper deposits on Isle Royale, he’d slipped the Island within the United States boundary as part of the Treaty of Paris signed in 1783. The views from Mt. Franklin were spectacular. Thank you Mr. Franklin. 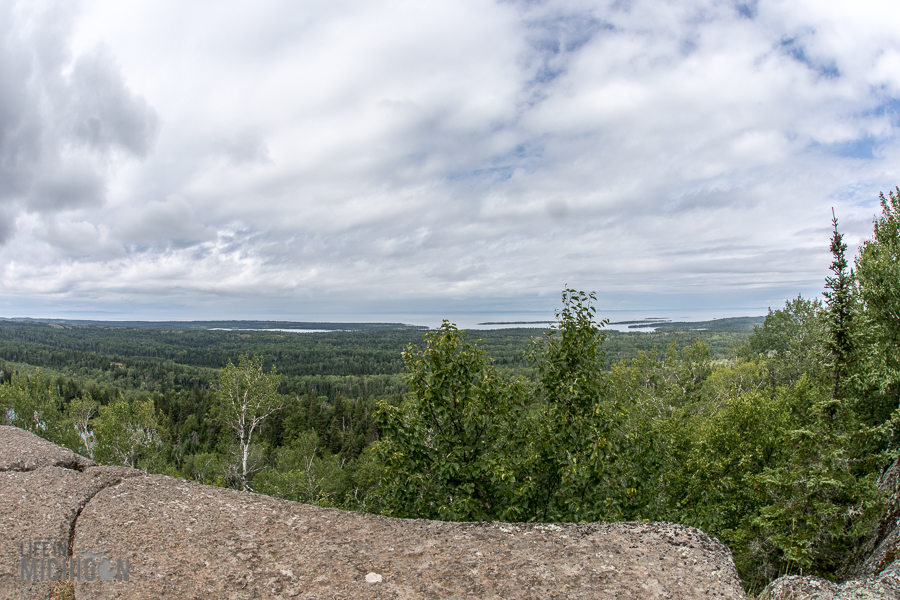 Directly across from the Rock Harbor is Raspberry Island. It is the first stop on the Sandy Sunset cruise. The bog on the Island is host to several unusual plants, including the carnivorous pitcher-plant. 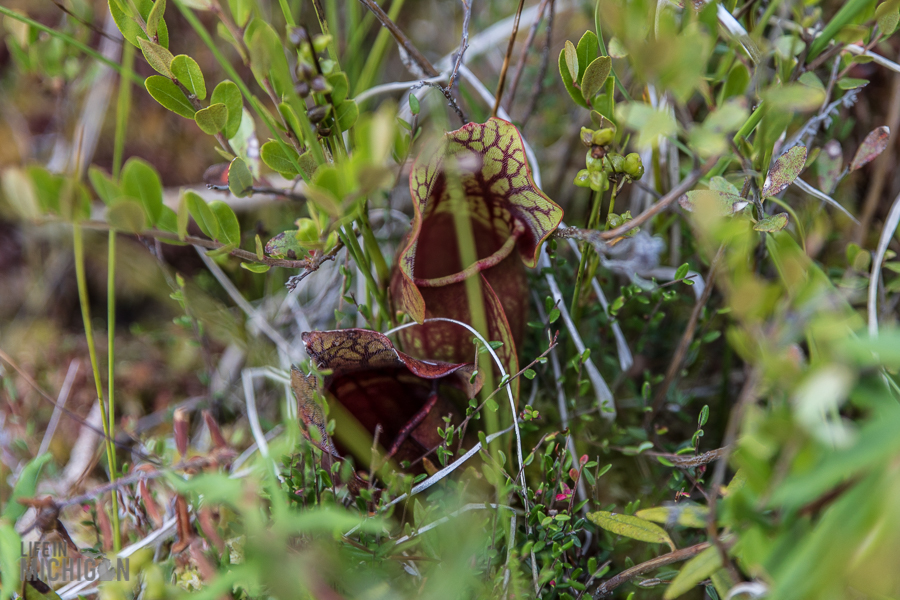 The Sandy left Raspberry Island, rounded Scoville point and entered Tobin Harbor. Just past Scoville Point is the “Artist In Residence Cottage.” Tucked along the shoreline are several of the life-lease residences. Chad, our guide pointed out Ontario’s Sleeping Giant and Thunder Bay. The moonrise on our way back to the harbor was pretty spectacular. 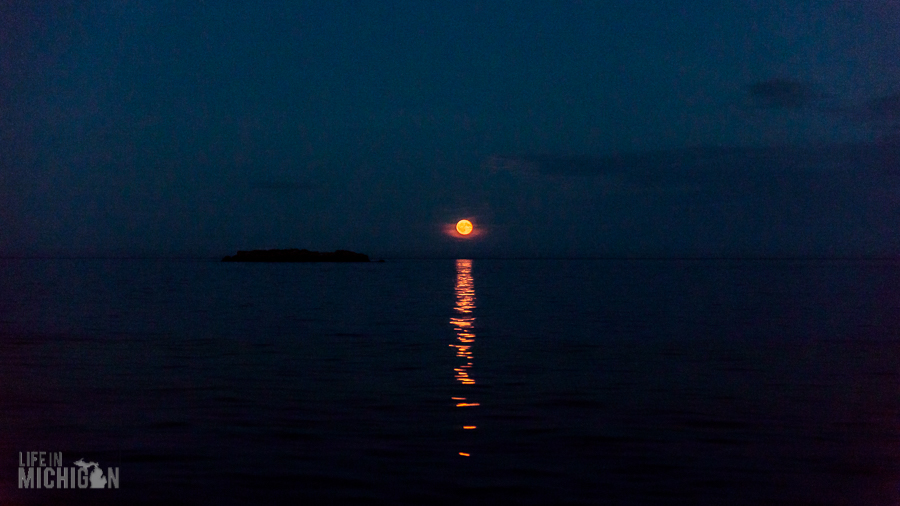 Our final Sandy Tour was of Passage Island. Ranger Kelly turned this trip into an event. It was like touring a terrarium. Ranger Kelly was phenomenal. I leaned more about birds and plants on her hike than I did during high school. I wanted to bundle her into my backpack and take her home with me. 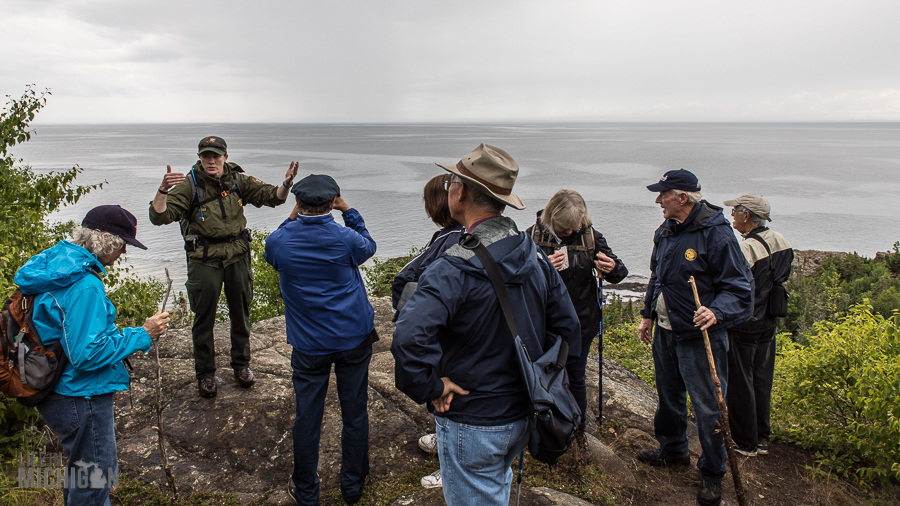 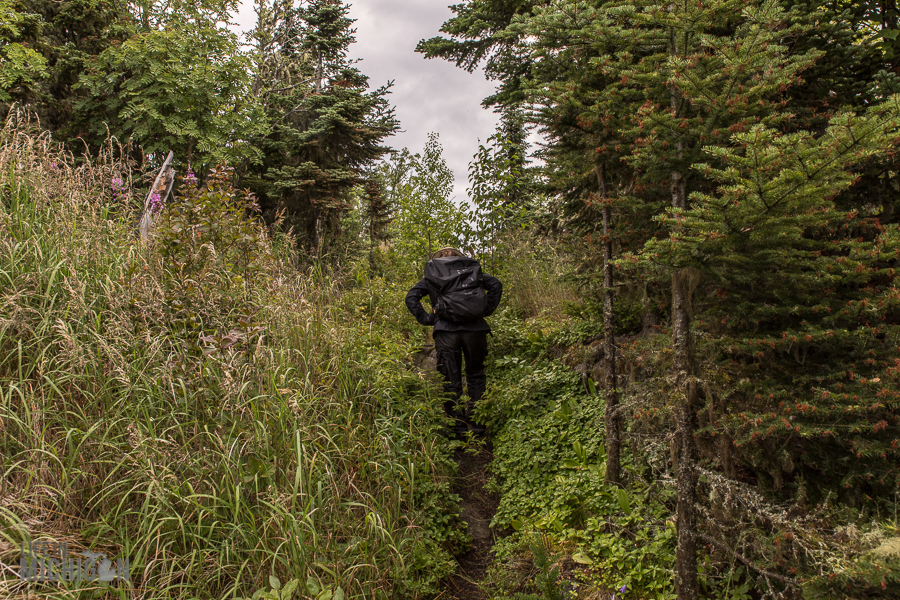 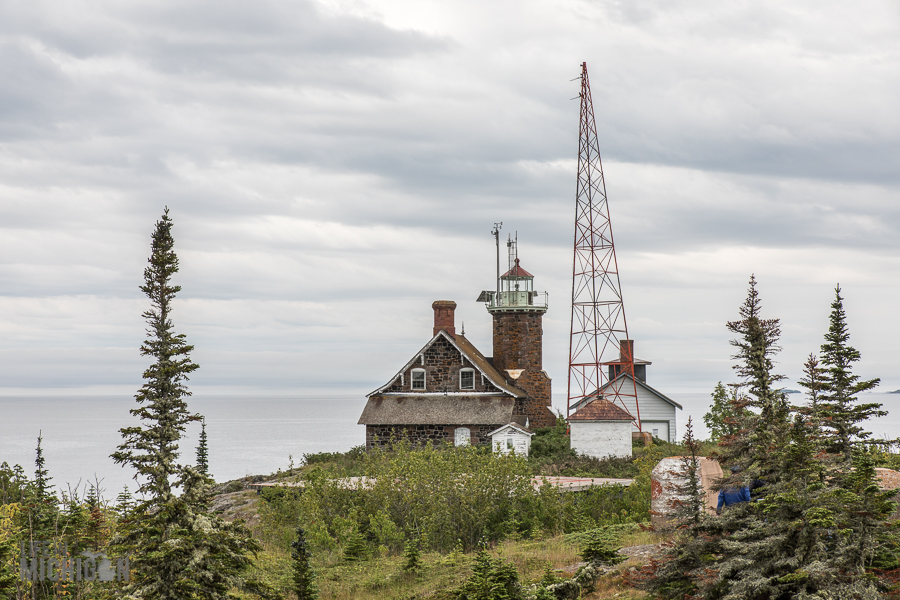 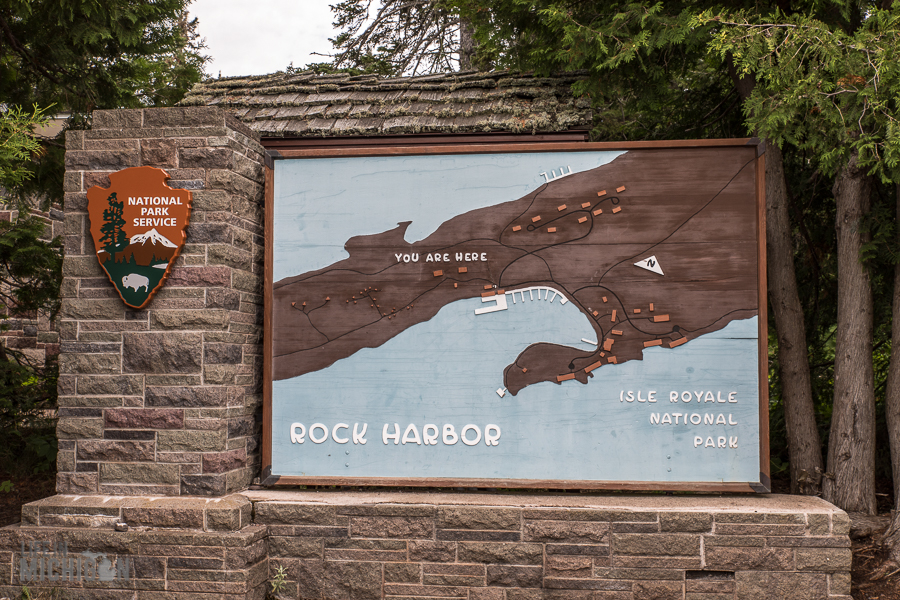 Isle Royale is definitely bucket list worthy. We barely scratched the surface of this magnificent Michigan gem. There were many great moments. We have several hundred pictures in our gallery. Drop by and explore. Give us a shout if you want to use one.

We would like to make improvements to the Life in Michigan site and would be honored by your patronage. If you have the means, consider showing your support on our Patreon Page.

If you enjoyed our travels to Isle Royale, then share it on your favorite social media venue or send it as a link to your friends and family. This is good for everyone!