Chuck is always looking for new adventures so I wasn’t surprised when he bought tickets for the A2 Art and Brew, an event to support the Ann Arbor Art Center. I’ve never actually gone on an “official” pub crawl, this was my first one. I know, shocking. So I have no idea if this pub crawl was typical or not. I totally recommend it.

The A2 Art and Brew participants visited 7 different locations in Ann Arbor to sample brews, taste appetizers, and appreciate chalk art. After we finished our crawl, we were asked to cast our votes for Best Brew, Best Bite and Best Original Work of Art. The chalk artist with the most votes won a $500 prize.

We collected our tickets and rating card for the crawl from the Ann Arbor Art Center. 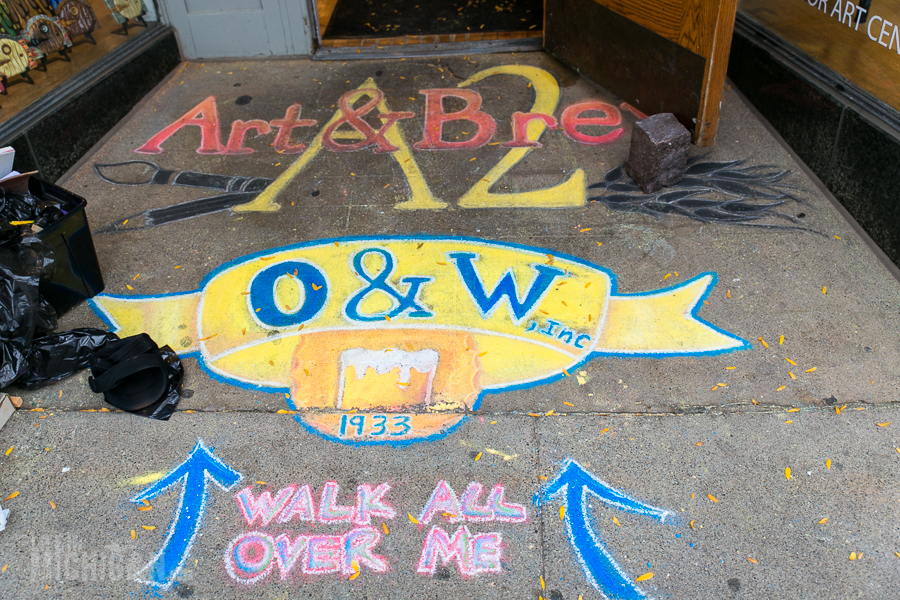 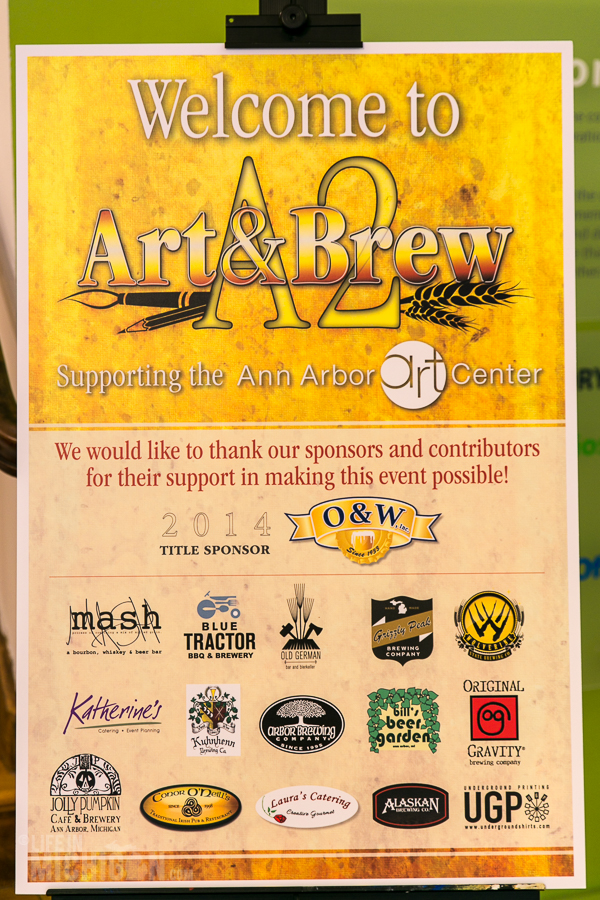 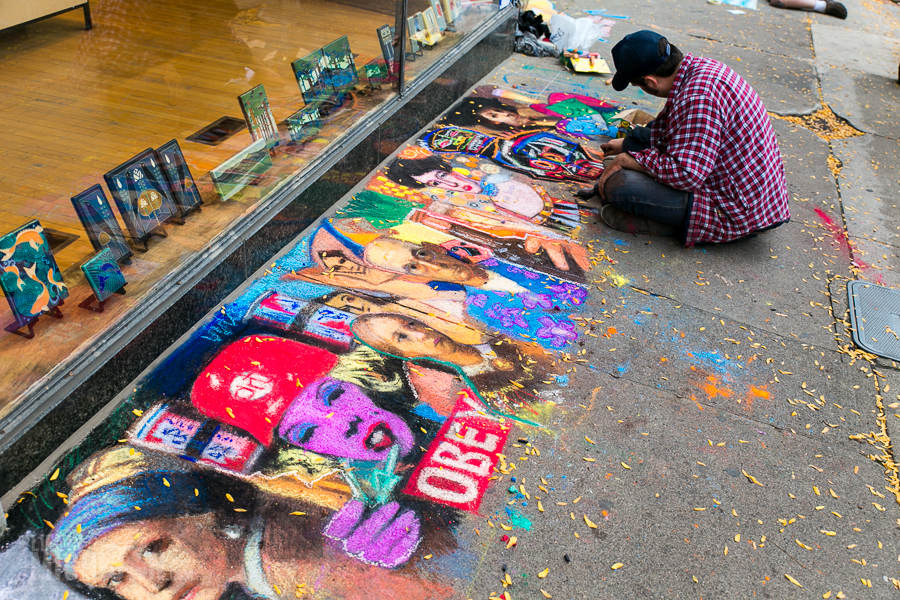 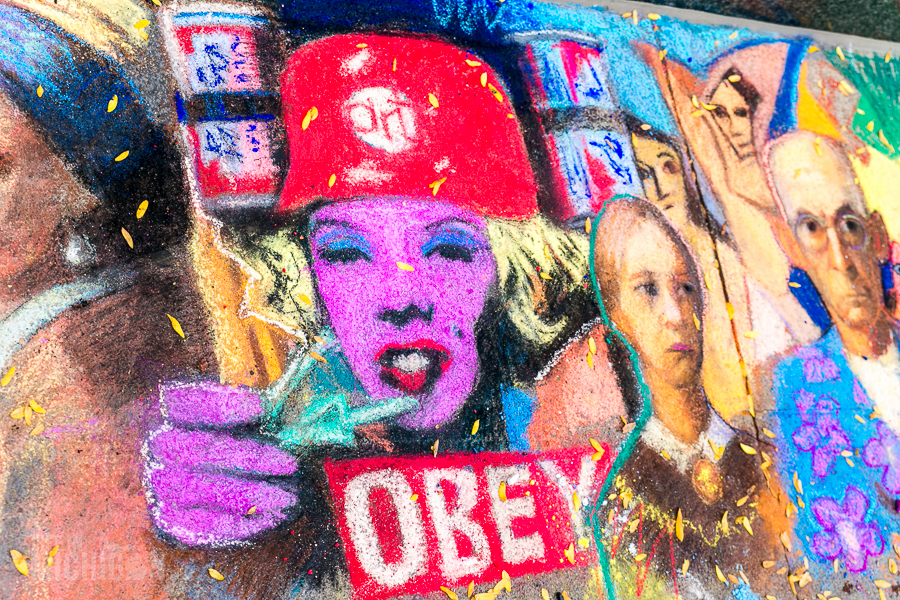 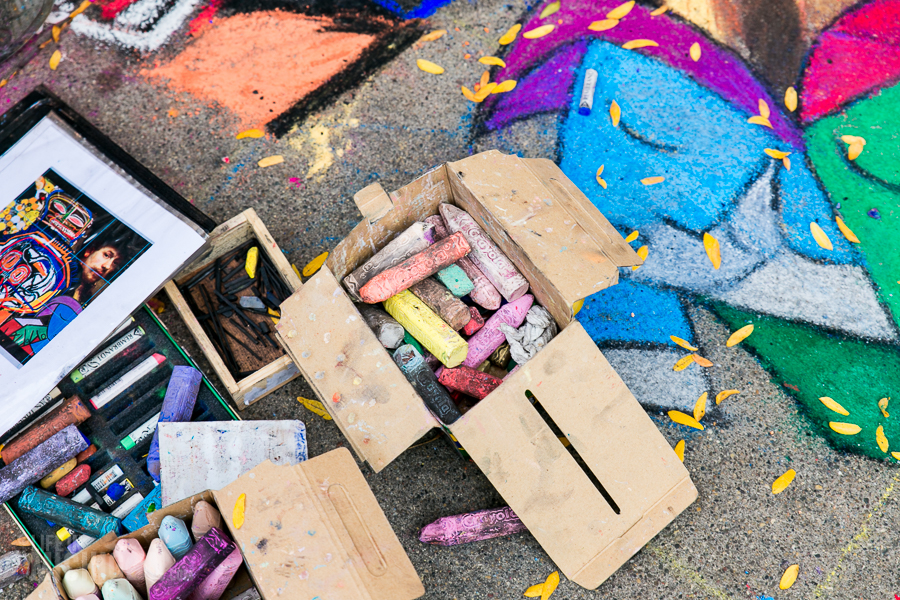 Nick said he started working on his masterpiece at the “butt-crack of dawn”. There was then a long discussion about what that actually meant. I think it is safe to say all the artists put in many hours.

Grizzly Peak took Best Bite for their Bavarian Spring Rolls. Grizzly Peak and the Old German were pouring Oktoberfest Lager. We enjoyed our beers while watching the Detroit Tigers game in the Old German’s large “kingly” chairs.  When we sat down Chuck said, “these are chairs for royalty and are meant for kingly comfort.” I should have gotten a picture of him in the kingly chair. When we emerged from the Old German it had started to rain and Natalie Gregorarz, the artist partnered with the Grizzly Peak was watching the rain turn her beautiful chalk art into a watercolor. I thought Natalie should have won. I’m not sure why DRIPA did not win the Best Brew. Perhaps the other participants were not aware that Kuhnhenn Brewing was the featured tap at Conor O’Neills or knew of this delicious goodness. Our first taste of DRIPA was during the 2013 Michigan Winter Beer Festival. We were very excited to see this brew listed on the rating card.

Just look at it! It is a work of art. 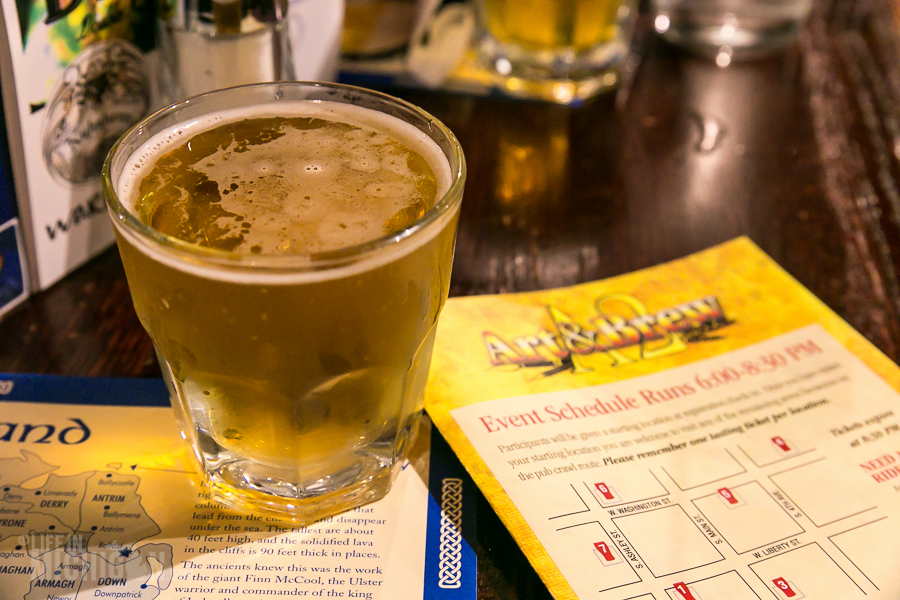 Jean Spindler created a whimsical work of art for Jolly Pumpkin. This masterpiece was one of Chuck’s favorites! 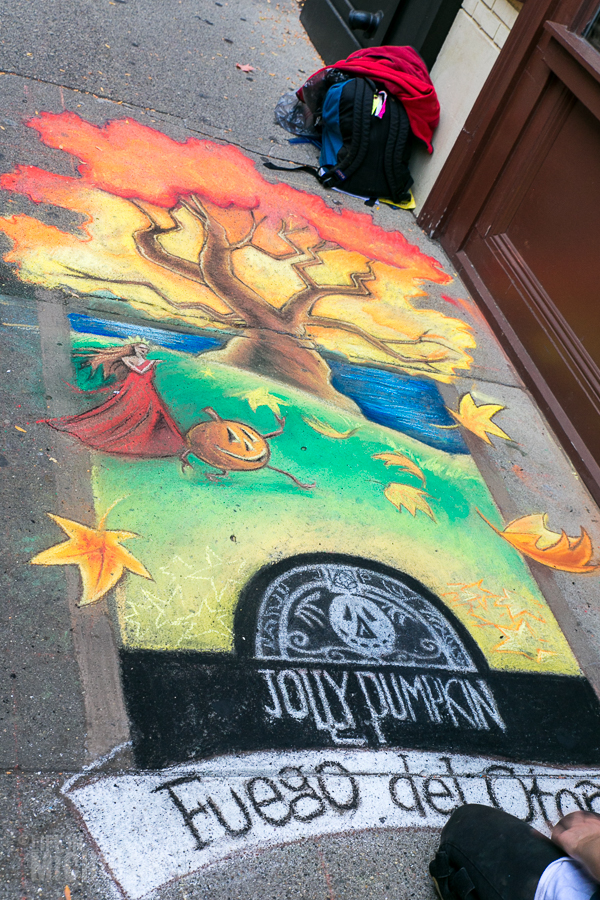 Chris Monaghan was partnered with Blue Tractor. I rather thought he did a great job reflecting the brew’s personality. 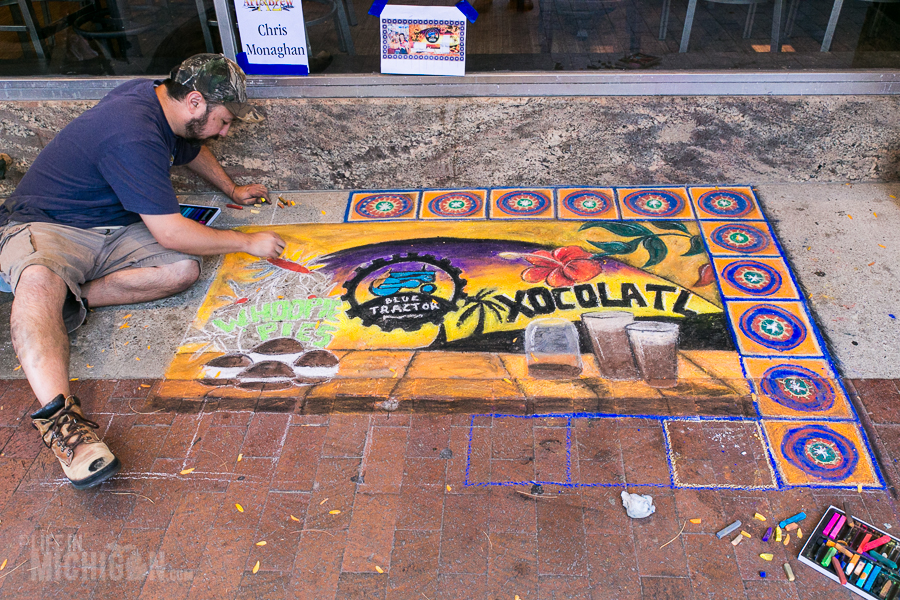 If you aren’t in the know, the Violin Monster is a much beloved street performer in Ann Arbor. He wears a werewolf mask and sometimes goes the whole gamut with hairy claw gloves and boots. He then entertains folks with his violin. If you pay him a tribute for his work, he howls in delight. He is a very fun and unique performer and probably the only street performer that I know of with a beer named after them.

We tasted this delicious brew in August when Arbor Brewing Company had a tasting at Busch’s Fresh Food Market. 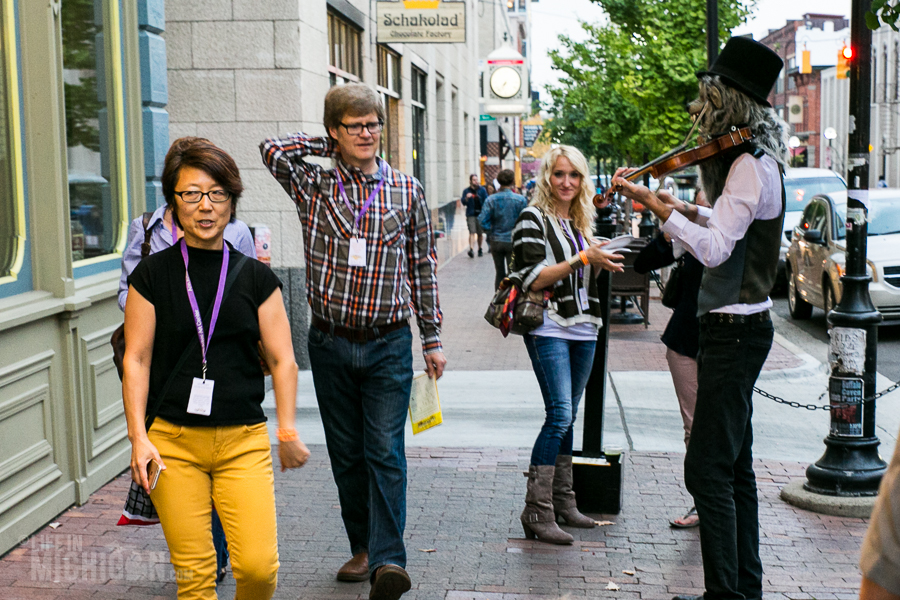 Bonnie Henley was still working on her masterpiece when we arrived. You can almost hear the Violin Monster… awwoooooooooo. 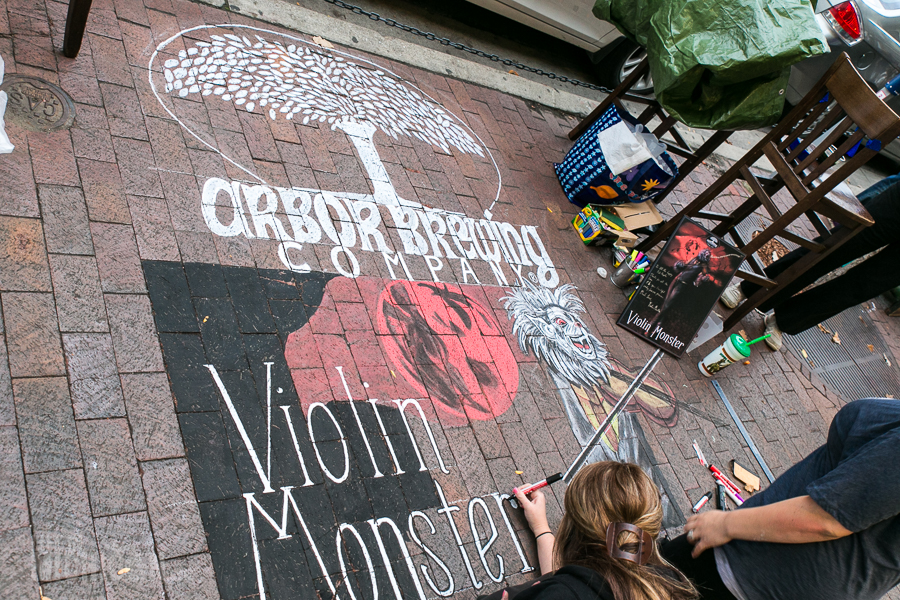 Brian Little was partnered with Wolverine State Brewing. He had cleverly incorporated part of the sidewalk into his masterpiece. There is no doubt it is paired with an Oktoberfest brew! Nice work. Julia Pollington was paired with Original Gravity’s Old Skook Altbier. I had to look this one up. It was a new to me. It is a traditional Dusseldorf style Altbier brewed with 100% German Malt. Julia was still busy working on her masterpiece.