We have always thought of the Ann Arbor Summer Festival as Top of the Park because when the festival started back in 1984, the main focus for us were the free movies on top of the parking garage at Fletcher street. While Top of the Park is no longer on top of the garage, it is still going strong with over 140 musical, theatre, comedy, and performance art events each year. 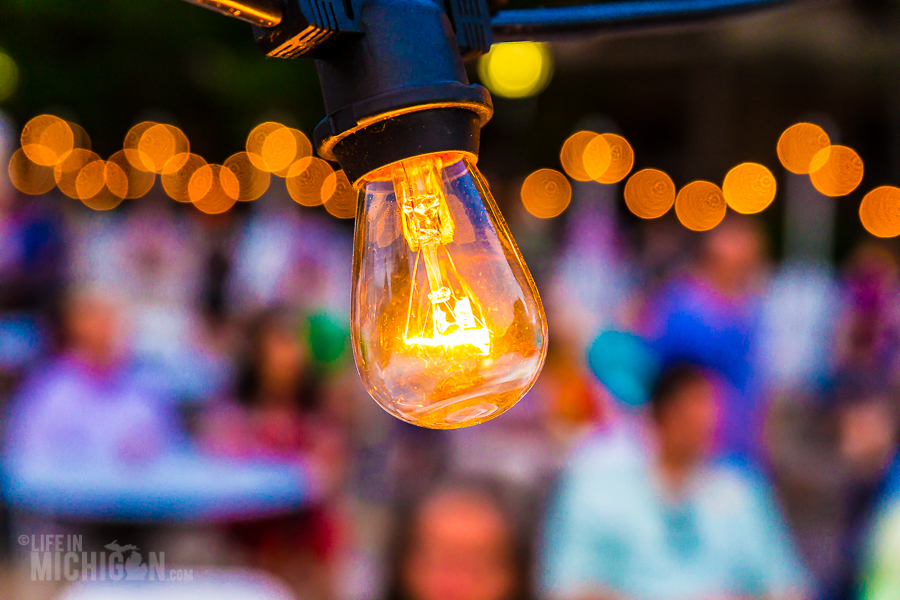 Something of a new tradition for us has been to visit Top of the Park during the July 4th weekend for some music and beers with friends. We started our holiday weekend adventure on Friday, July 3rd with some great country music by Jennifer Westwood and the Handsome Devils. I saw them for the first time at the Honky Tonk Throwdown in Detroit this past May and have been touting their greatness ever since. 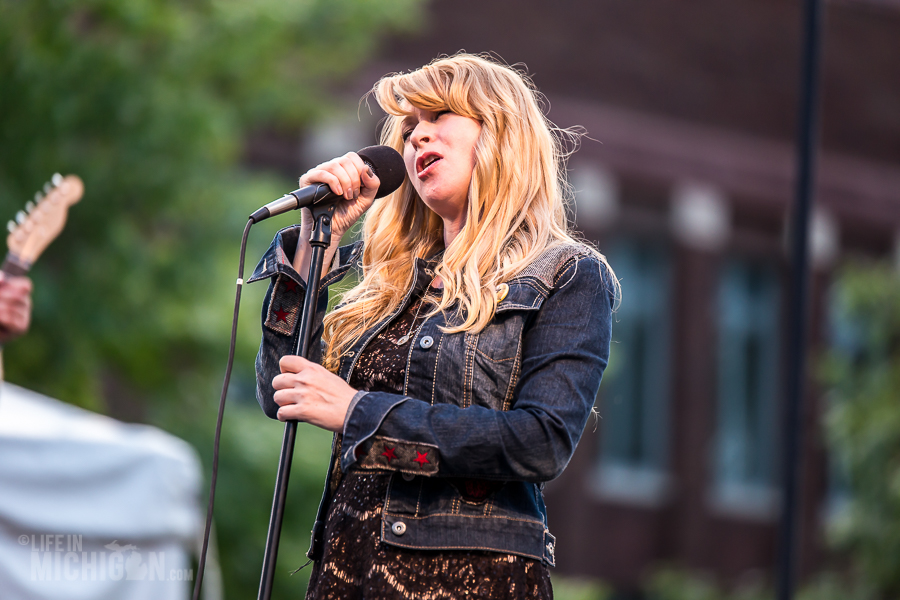 They played a smoking set of classic country. The type of country music that tells stories of real life with a little bit of a kick in the ass. Jennifer has a great voice that reminds me of the great women of country and rock such as Patsy Cline, Loretta Lynn, and Linda Ronstadt. 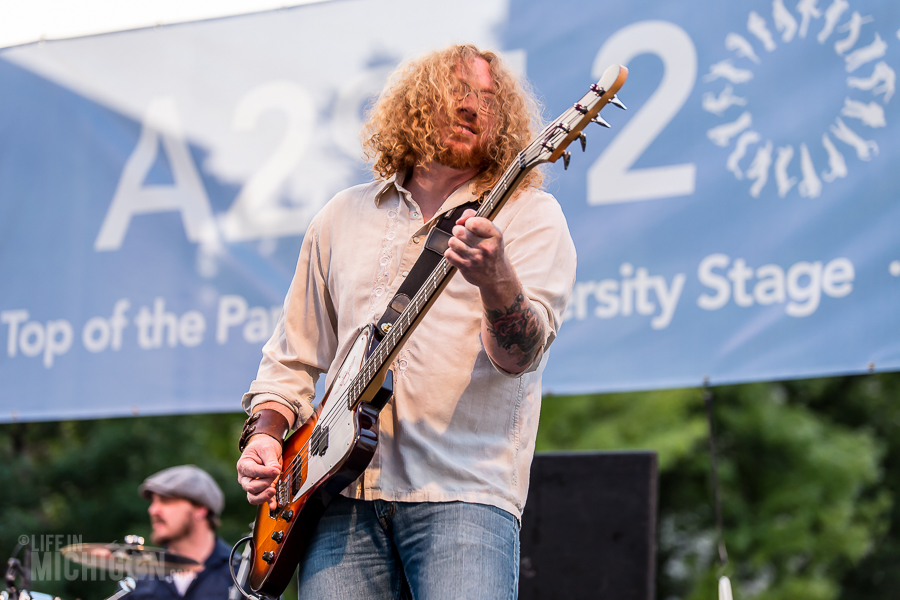 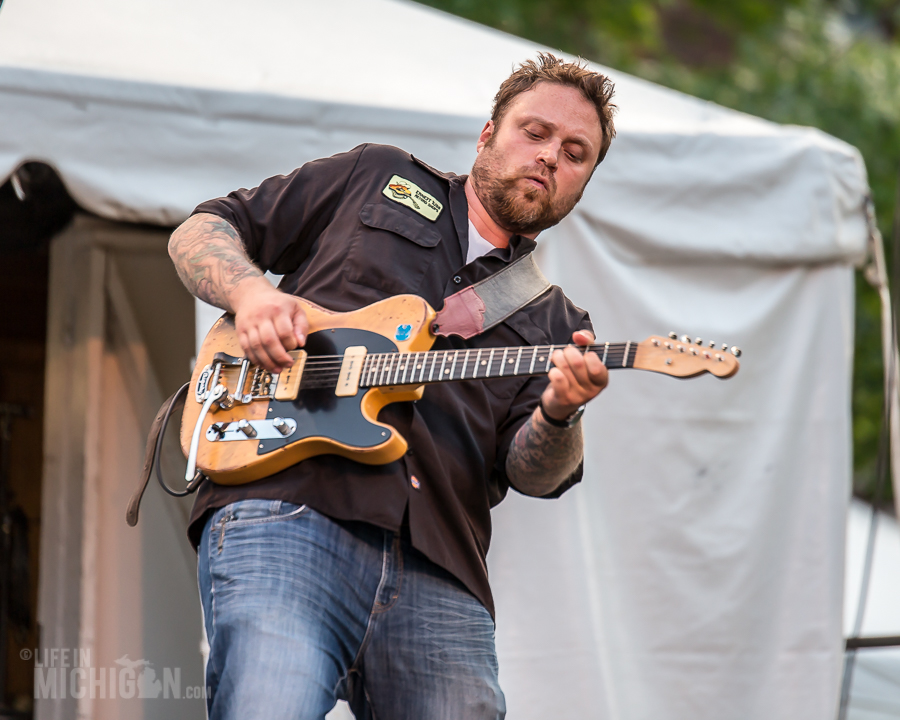 Jeremy Mackinder, Dylan Dunbar, and Ken Blaznek (the Handsome Devils) were in spectacular form. I can’t say enough good things about the guitar playing of Dylan Dunbar. What an inspiring player! While most of the music was original, their cover of “Jackson” was sweet and savory. Stop by the gallery for more pictures of the band. 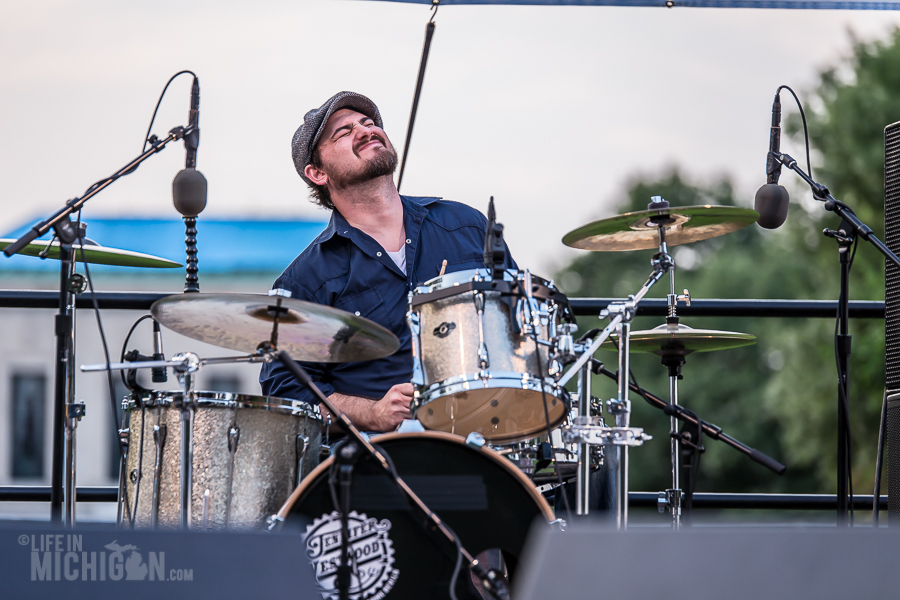 There was a short set change which allowed us to get a Griffin Claw IPA. Many thanks to the Ann Arbor Summer Festival and O&W distributing for keeping Michigan beers on tap during the festival. With beer in hand, the simmering blues rock of Captain Ivory kicked off. 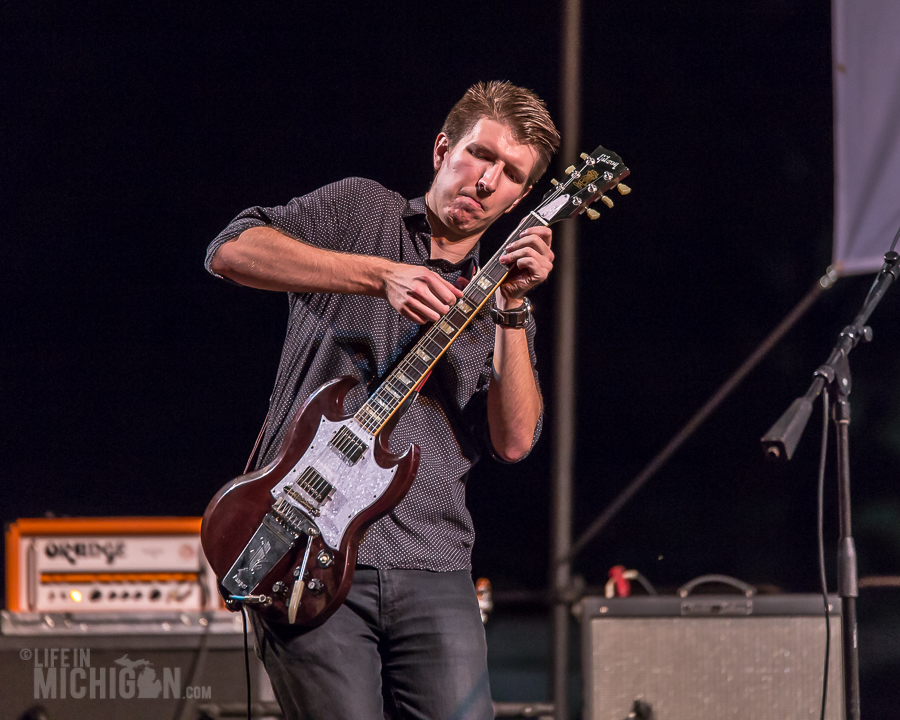 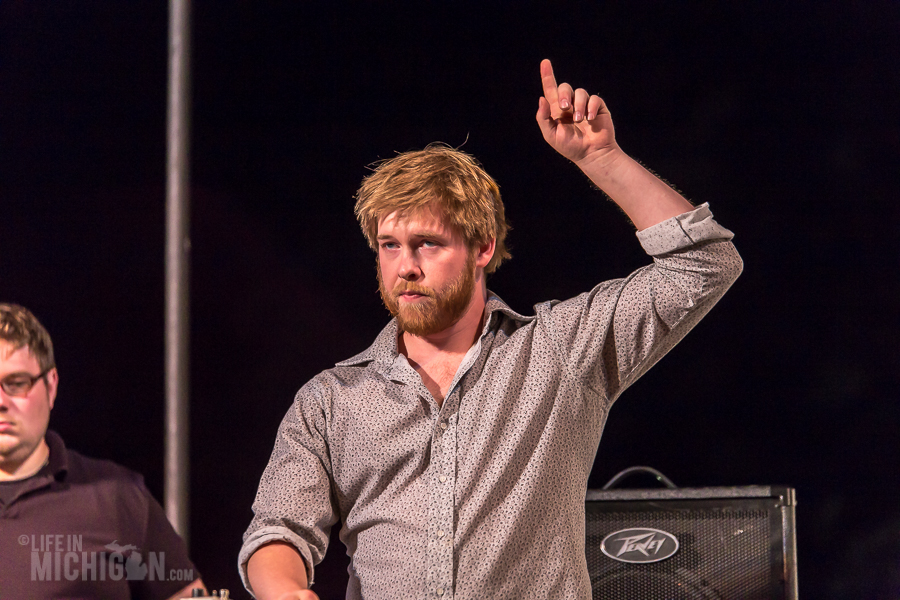 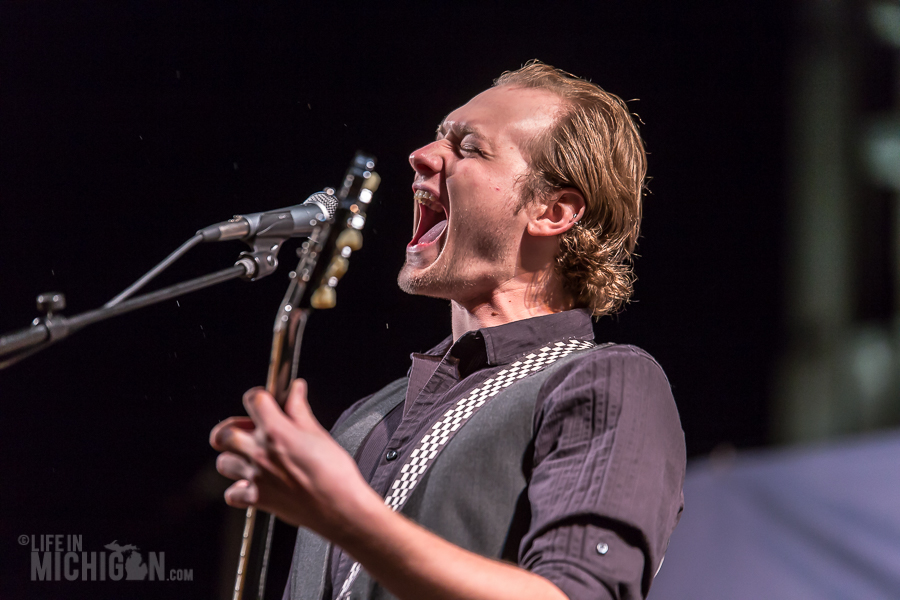 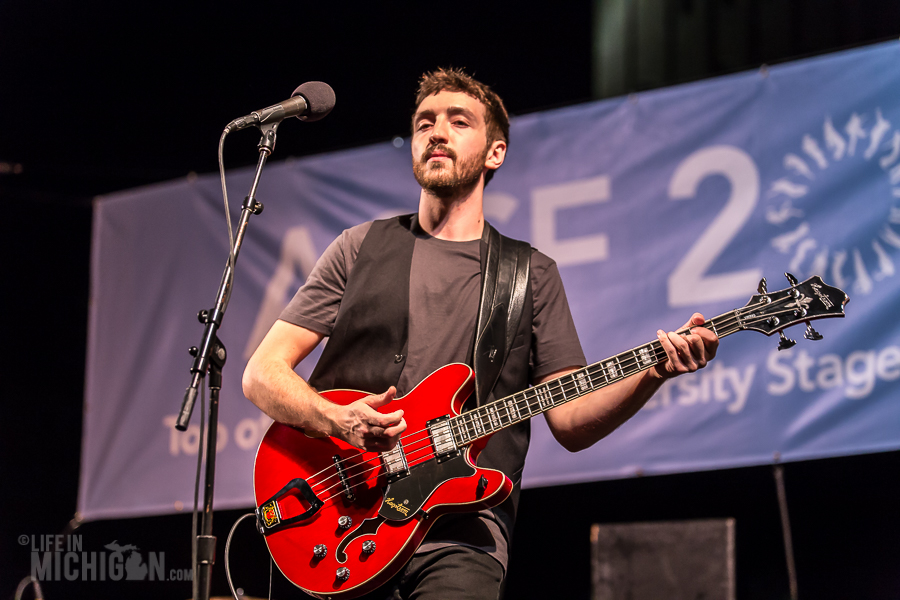 Captain Ivory are Michigan natives who’ve relocated to Nashville and were on a tour that brought them back home. They were sporting a new drummer Seth Maschari who got the show off to a hell of a start with a flourish of snappy drumming. The band jammed favorites such as “Tennessee” and “Quiet Casualties” as well as their standby cover of Dave Mason’s “Feeling Alright”. They had folks dancing and cranked up at the Ann Arbor Summer Festival. Be sure to stop by the gallery for more pictures. 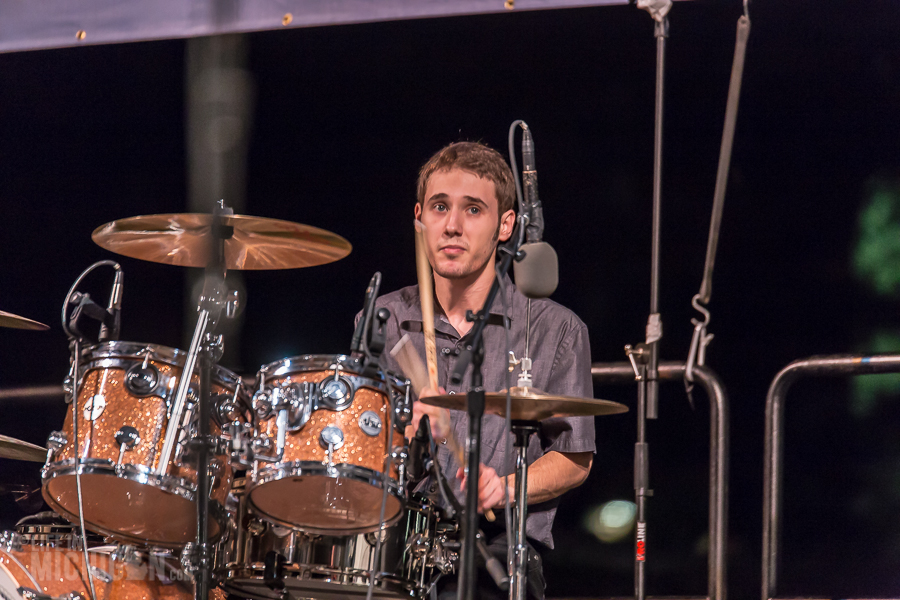 On Saturday, July 4th, we headed back to the Ann Arbor Summer Festival for more music (and beer). Our first stop was at the acoustic stage for the wonderful sounds of singer/songwriter Kate Peterson. Kate played last year at Top of the Park on the 4th of July with Sarah Cleaver for a Nervous But Excited reunion. This year she was solo and sounded magnificent. If you have not heard Kate sing, you are missing out on one of the best voices in Michigan. Her voice has a beautiful resonance with just a hint of elegant grit. 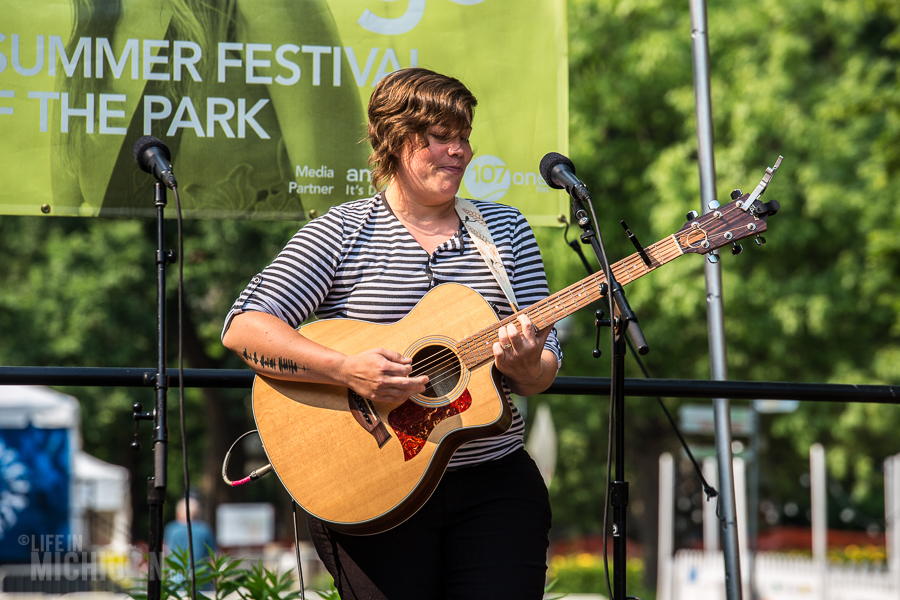 Kate played some of our favorites such as “Lansing” and “Said and Done”. She did a fantastic sultry cover of Libby Kirkpatrick’s “Crying”. Its much better than the original. She was joined by her wife Leah for a couple of tunes. 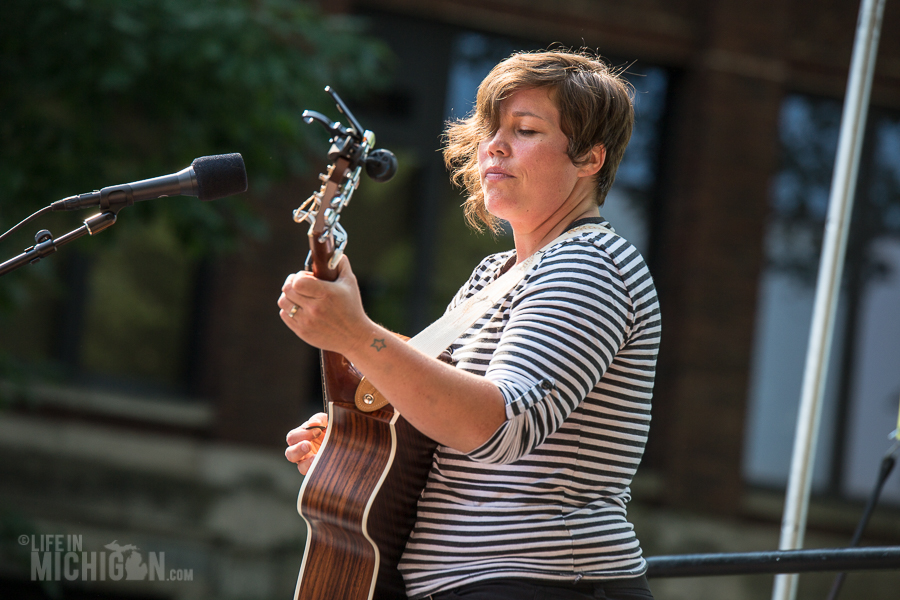 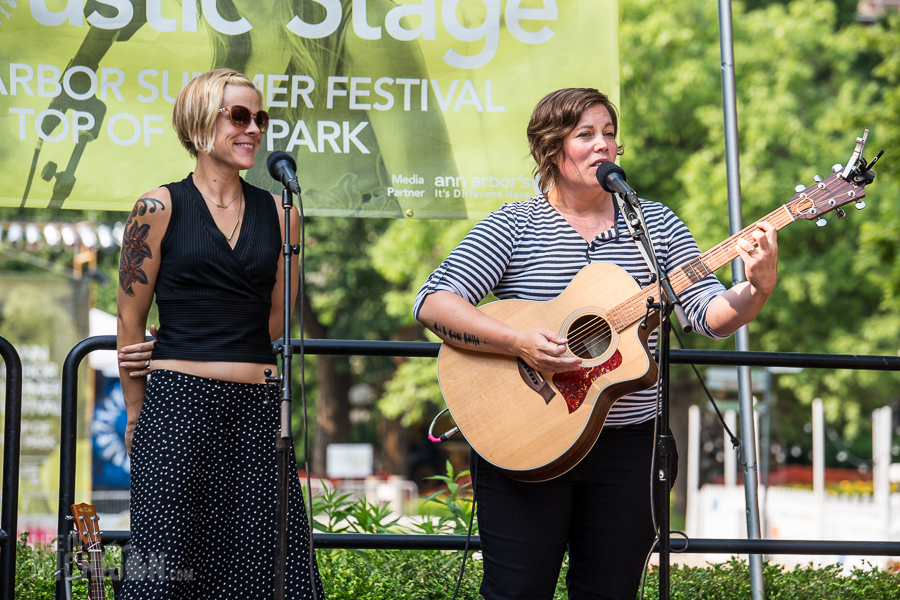 Kate mentioned she had been getting nostalgic with some old 70’s and 80’s love songs. With a smile she played the Bee Gees “To Love Somebody” and finished off her set with a nice rendition of “Faithfully” by Journey. Her set was a wonderful way to spend a sunny afternoon. Head over to the gallery for more pictures of Kate. 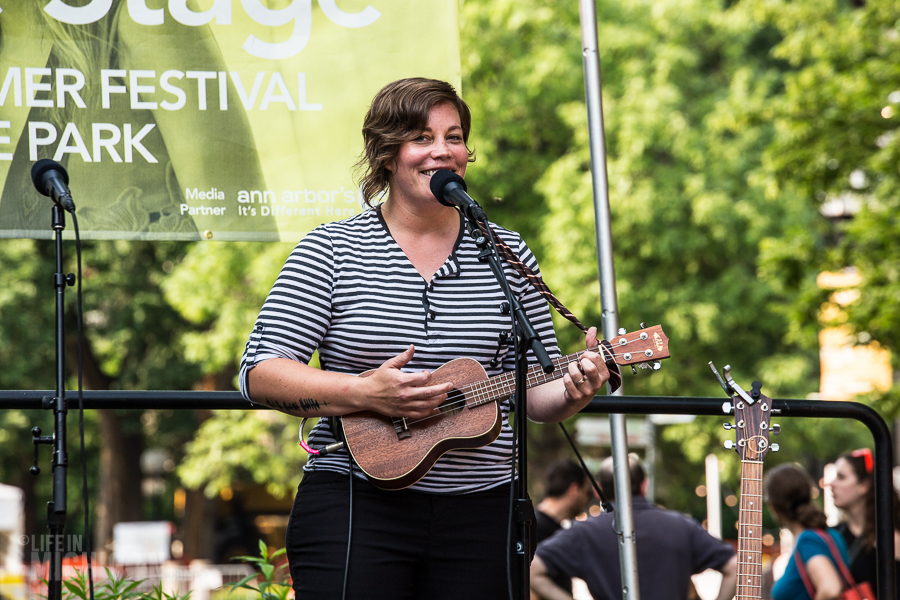 We headed over to the food carts and snagged some nice black bean taco’s from Chela’s and a couple Saugatuck Backyard IPA’s in between sets. We just had time to finish our food and drink when Abigail Stauffer was introduced on the main stage. She started off with a powerful yoga pose which put a smile on everyone’s face. Then jumped into some excellent uplifting jams with a full band behind her. 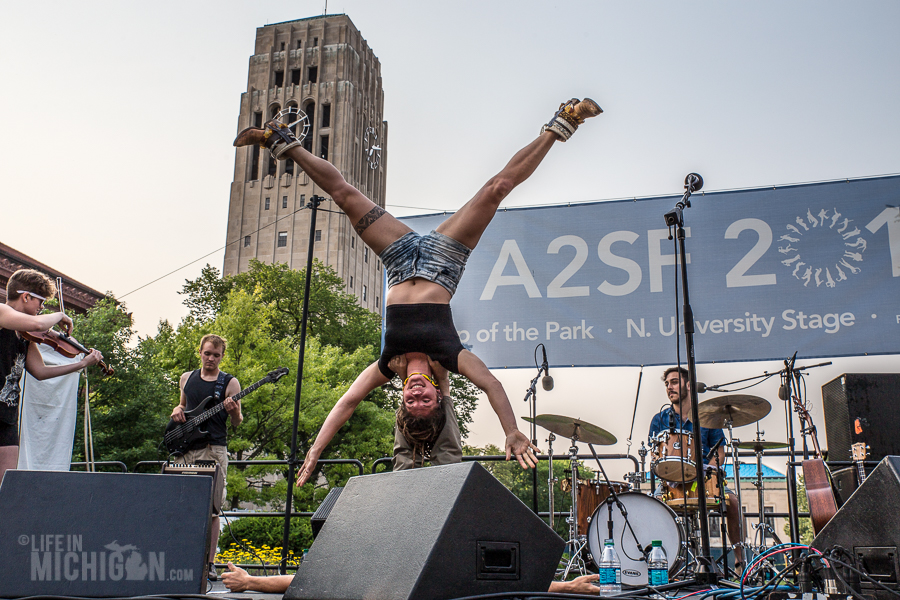 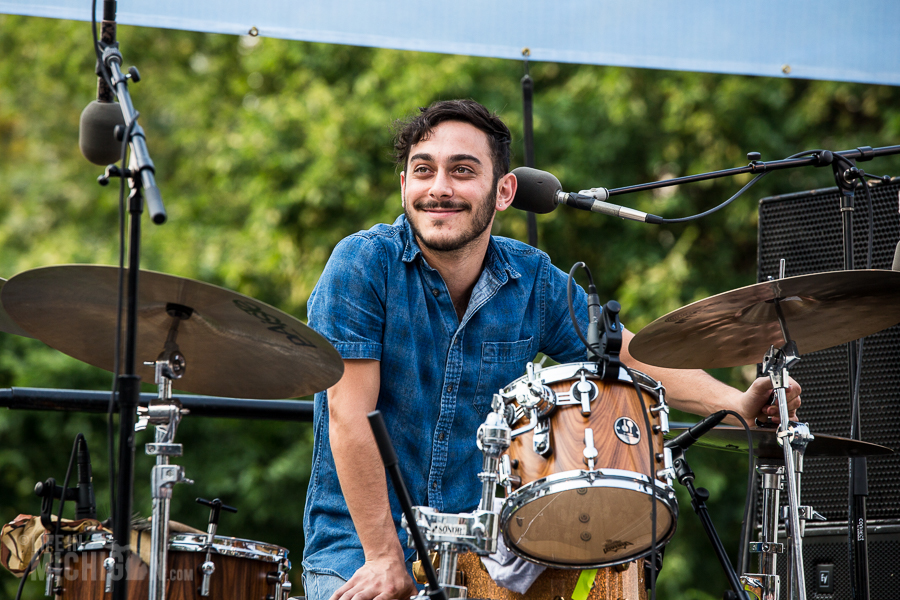 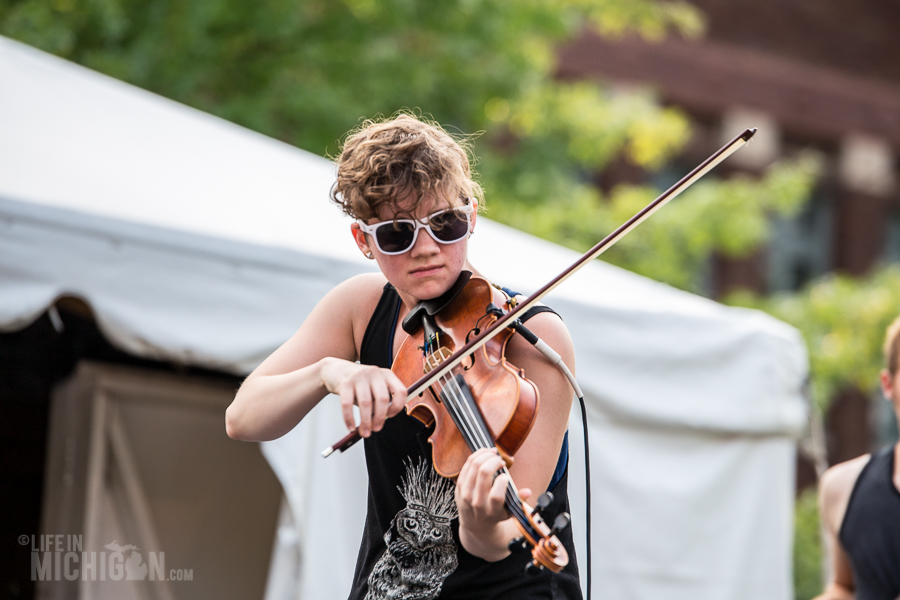 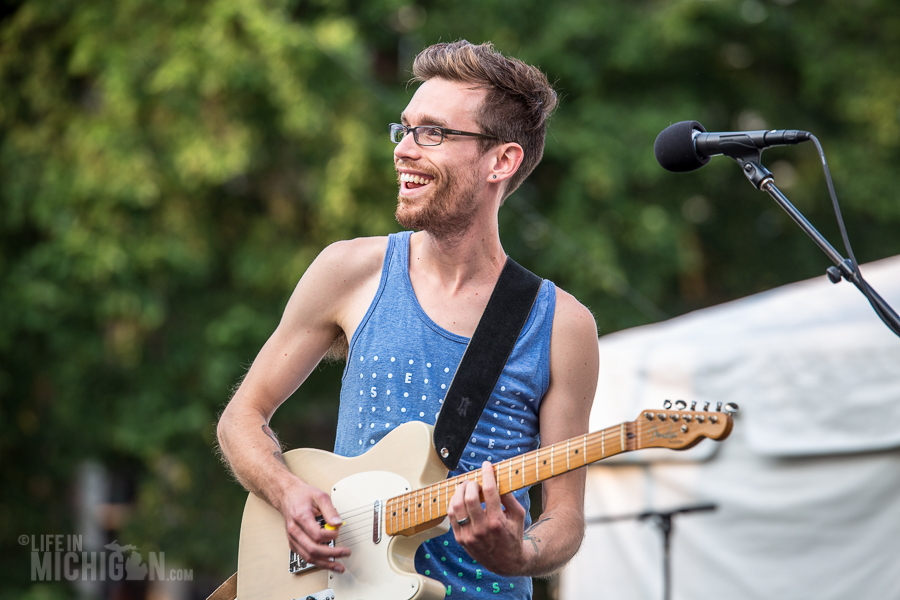 I have to say that I was enchanted with the sound of the music as well as Abigail’s voice. This was my first time seeing her with a band. We caught the tail end of her set during the Waterhill Music fest last year where she played solo. With a band, her music achieves a new level. The sounds swam in a ball of energy and happiness. Even if the subject matter is tough, the music speaks of hope. Abigail is a gifted young musician. I’m sure we’ll hear much more from her in the future. You can see more pictures of Abigail Stauffer in the gallery. 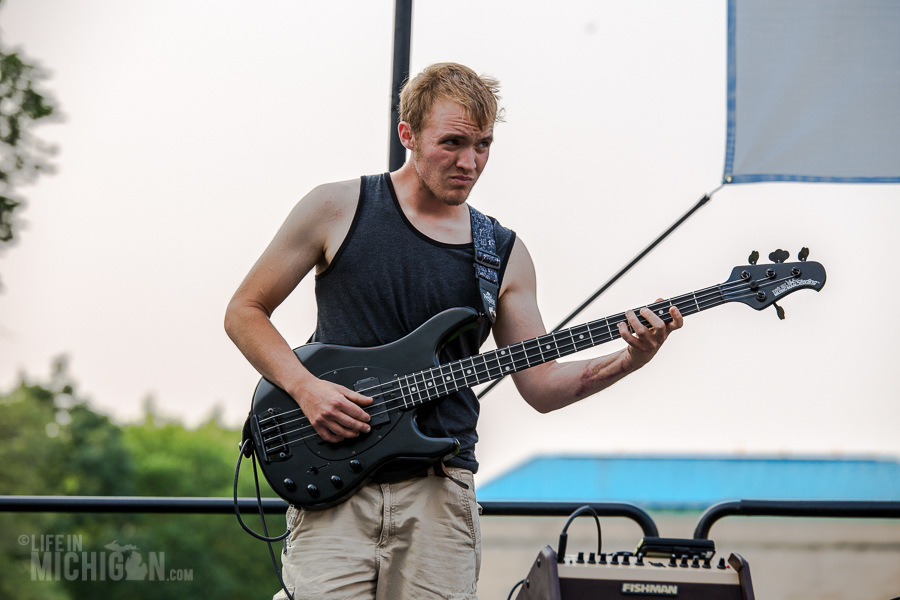 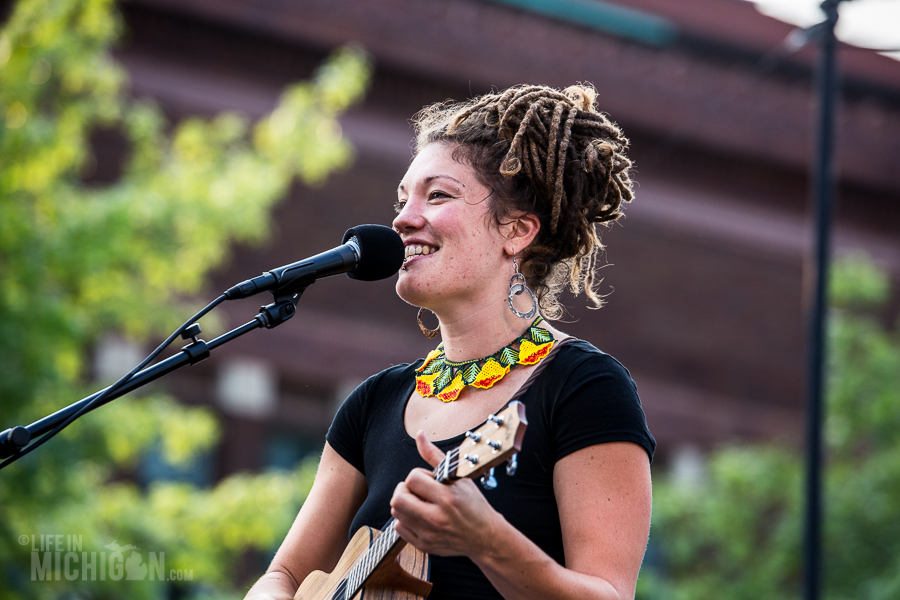 With the sun moving toward the horizon, it was time to get down and boogie with Ann Arbor’s Bluecasters. Our friends Phillis and Bill had mentioned that they knew the bass player (Doug Wolgat) and that the band was great. We knew they wouldn’t steer us wrong. The Bluescasters kicked out some great blues with a dynamite R&B groove. 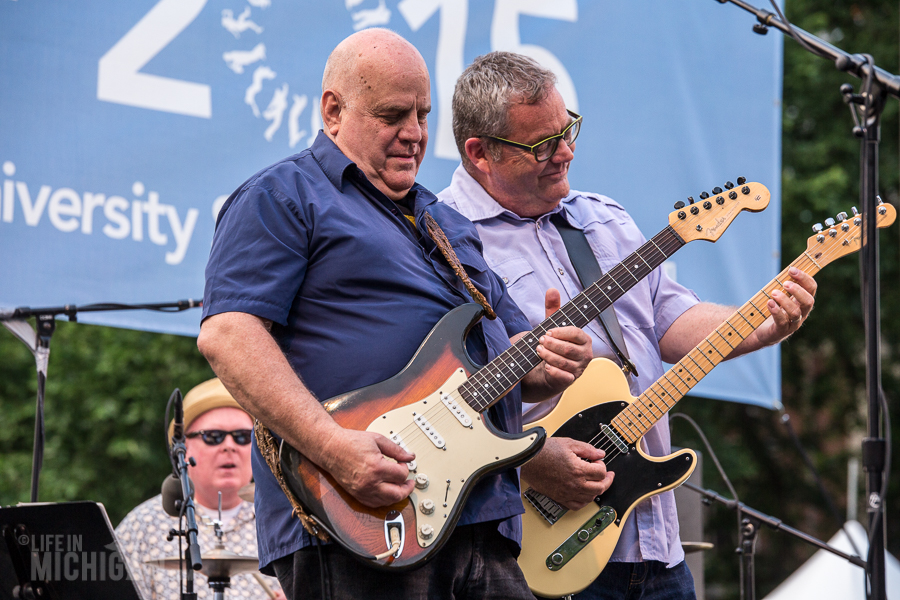 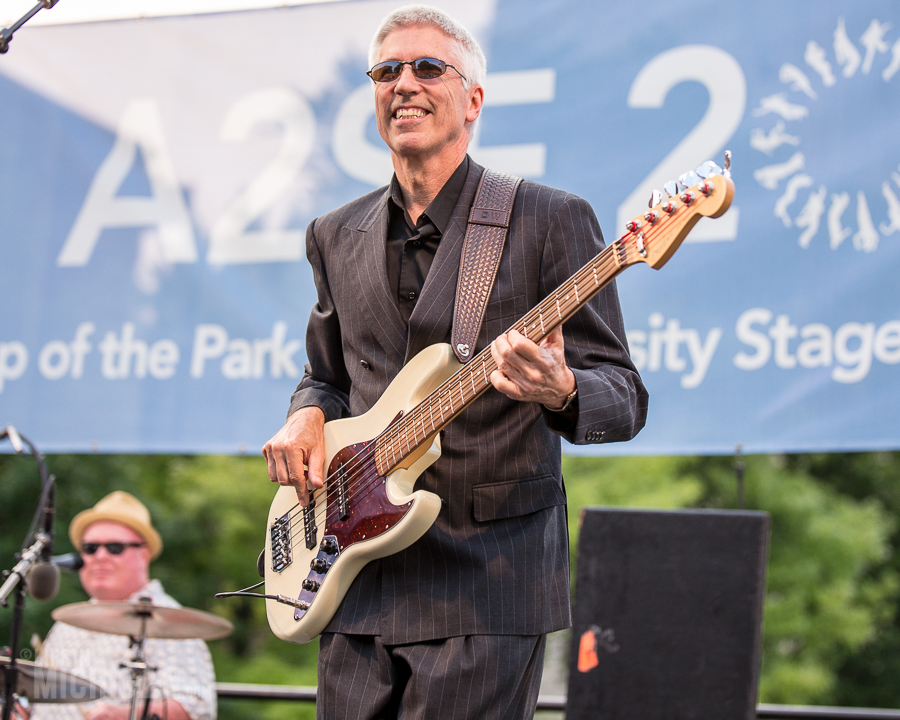 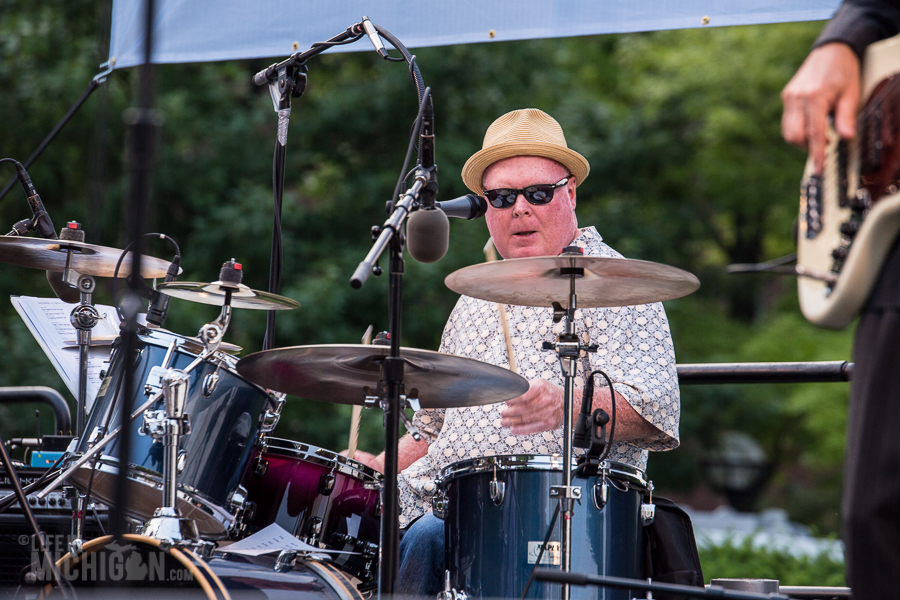 The mission for the band was to get people dancing and they quickly succeeded. I really enjoyed their cover of Jonny Lang’s “Lie To Me”. The band had great feel with some smoking blues guitar playing. It was a great evening of blues music and dancing. You can see more of the Bluescasters in action in the gallery. 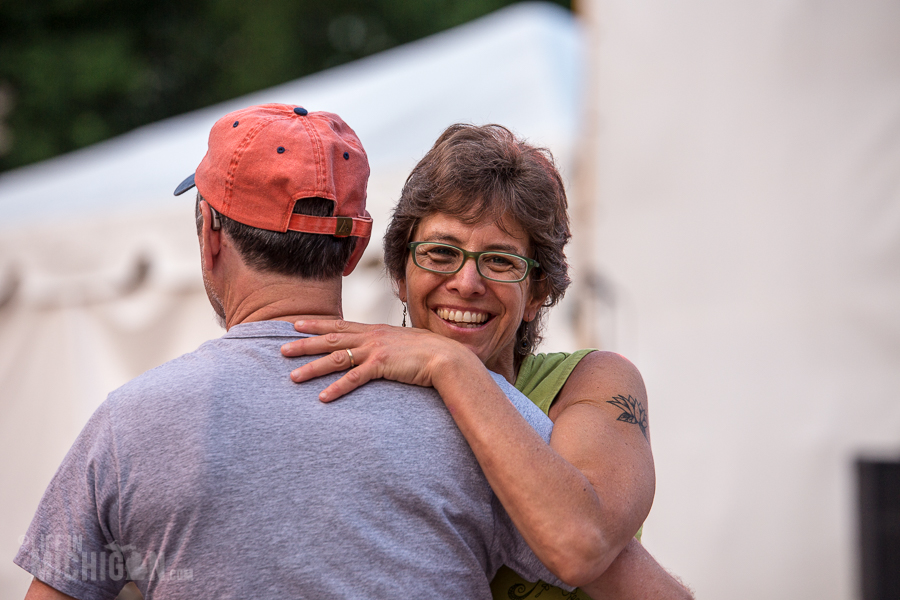 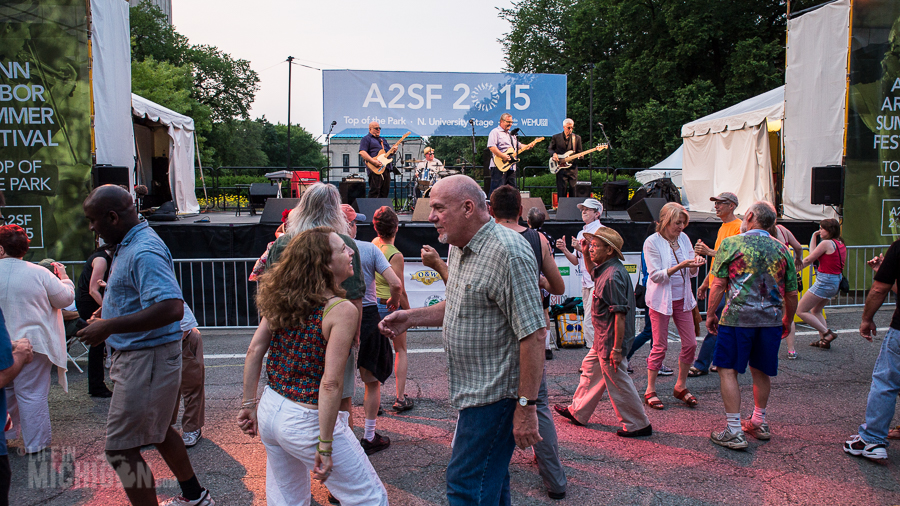 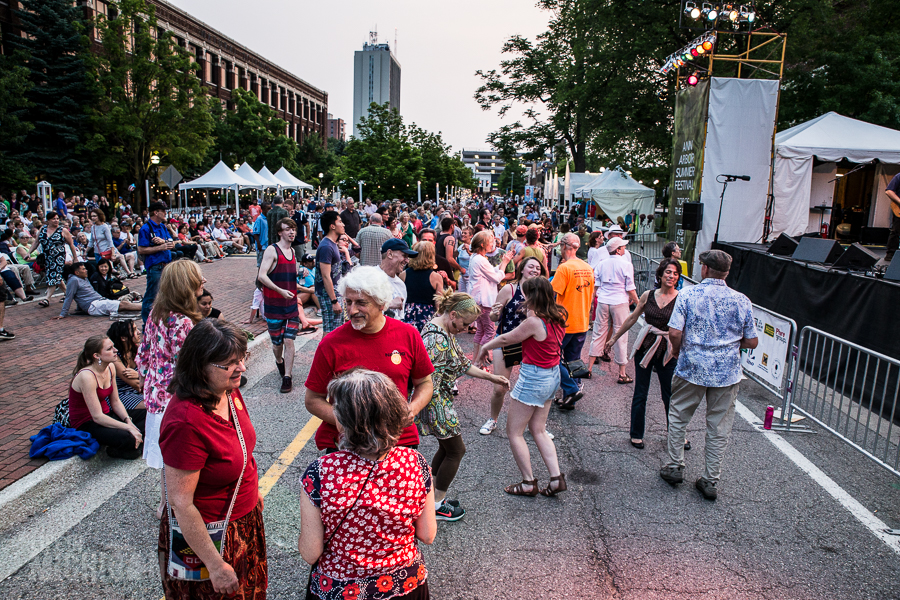 We barely scratched the surface of all the great events at the Ann Arbor Summer Festival. Did you make it out for the festival? If so, leave us a comment or send us a message on what you enjoyed the most. We love to hear your stories.