As far as I’m concerned the holiday season kicks-in with Ann Arbor’s Midnight Madness event. It is shopping, merrymaking, bar hopping and fun all rolled into one event. Chuck and I gathered with friends to kick-off the event at Old Town Tavern for food and a few drinks.

The streets were filled with shoppers, carolers, entertainers (including Elvis!), Santa Claus and even Miss Washtenaw County. 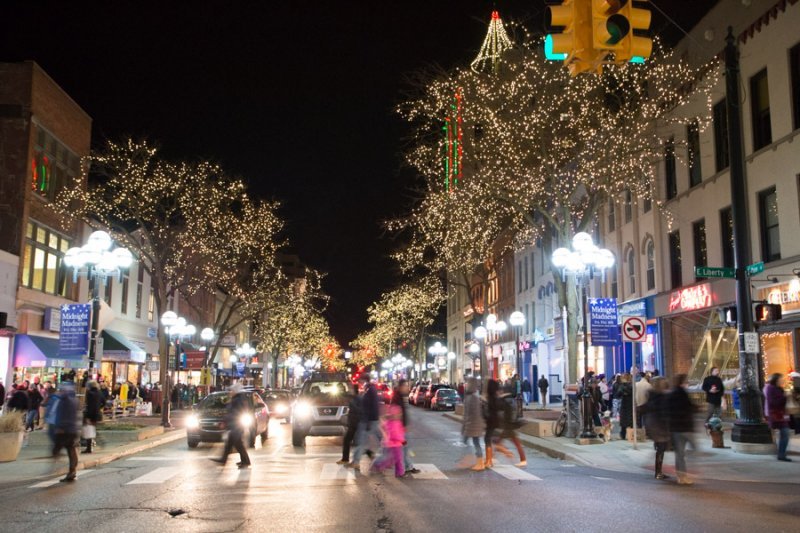 Our first stop was Downtown Home & Garden. Mark promised a special surprise for his patrons. This is one of our favorite places to shop in Ann Arbor. We would have stopped without the promised surprise. 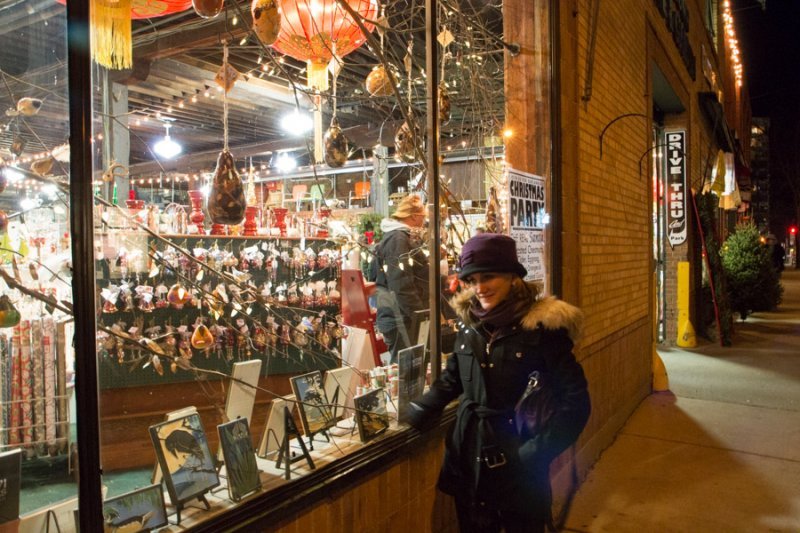 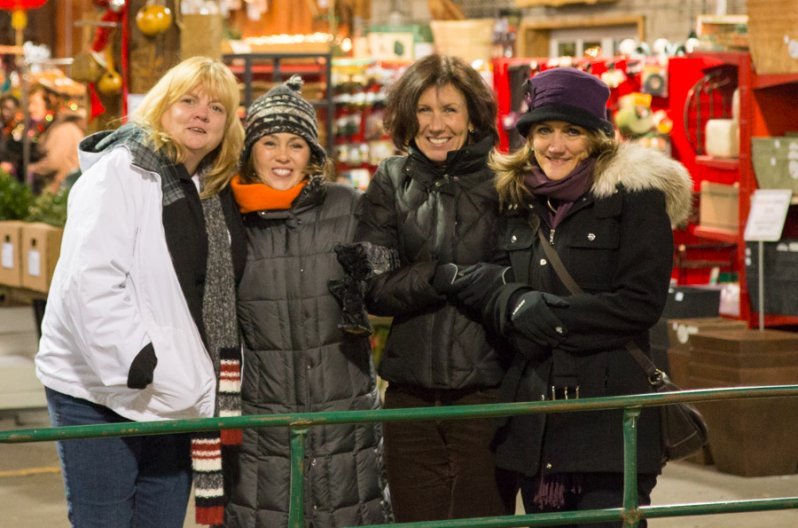 The special surprise, a mini-petting zoo! I was hoping for Scotch but the goats were fun. 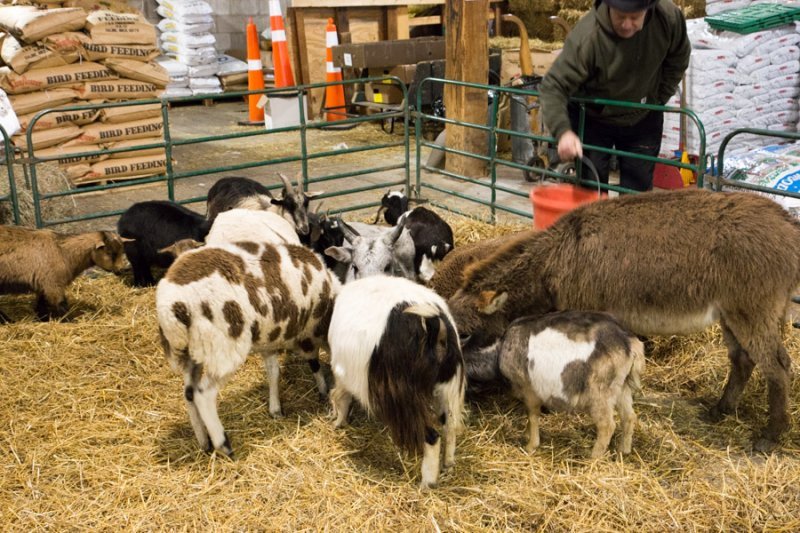 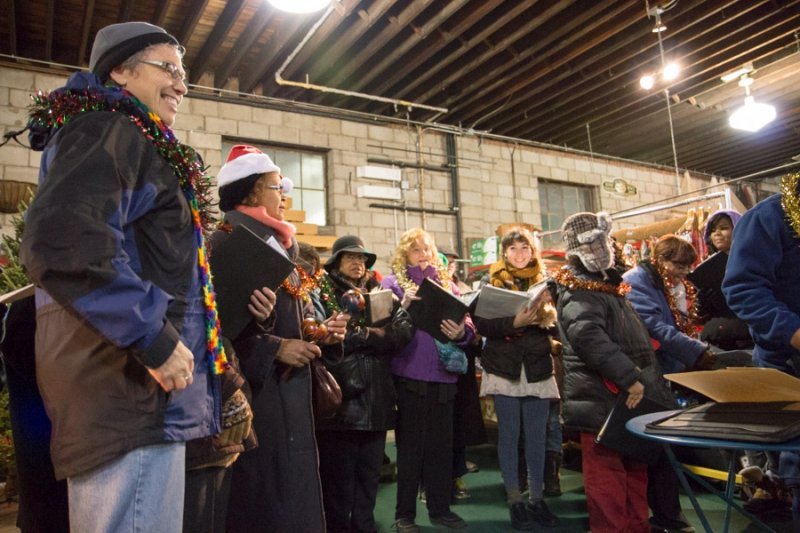 This is where I had my Grizzly encounter. Pretty sure he was down from the U.P. for the event. 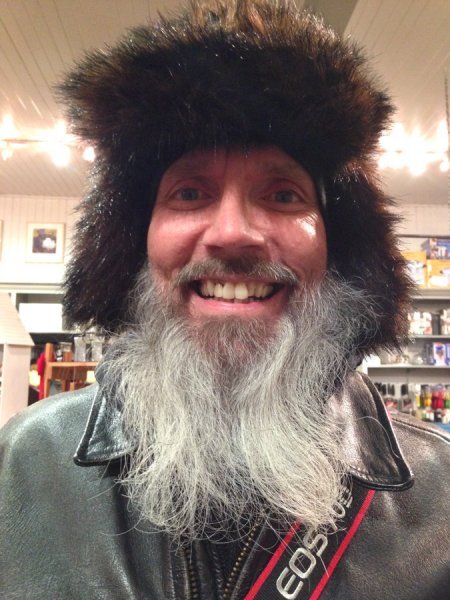 Lots of beautiful pieces to choose from at the Ann Arbor Art Center. 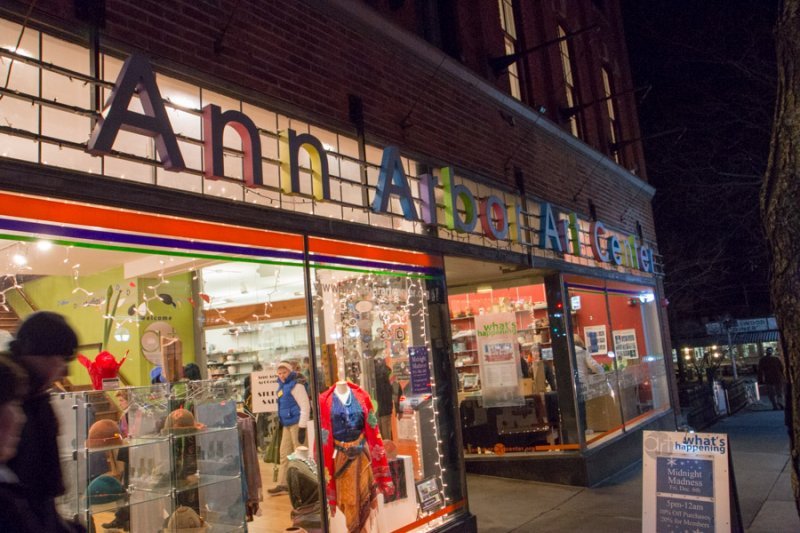 Midnight Madness and Galens Tag Days are both held the first weekend of December. If you live or work in Ann Arbor for any length of time, you are familiar with this Ann Arbor tradition. Galens members (U-M medical students) collect donations for the children of Washtenaw County. After you toss your donation into the bucket you get a tag to tie to your coat. This way you are not asked to donate again. 100% of the donations are distributed.  Last year over $500,000 in donations were given out. It’s not hard to toss your money into the bucket. 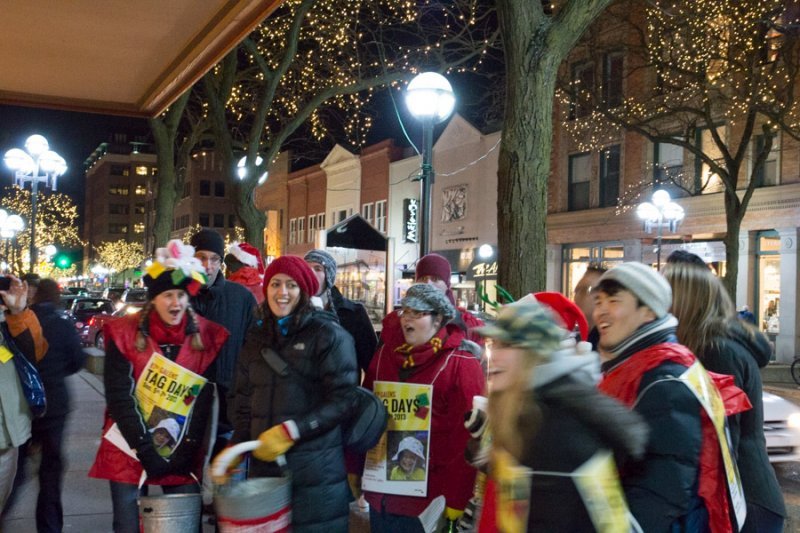 A few of our friends were at Running Fit  and were texting us so we made our way down Liberty to check-out Running Fits’s Winter Sale. Everything was on sale! I purchased some new compression sleeves at 20% off. Thank you very much!

On our way there we stopped by the Robot Supply and Repair Store. I love this place! All proceeds go to  826Michigan, a nonprofit writing and tutoring center for students ages 6 to 18. How cool is that! 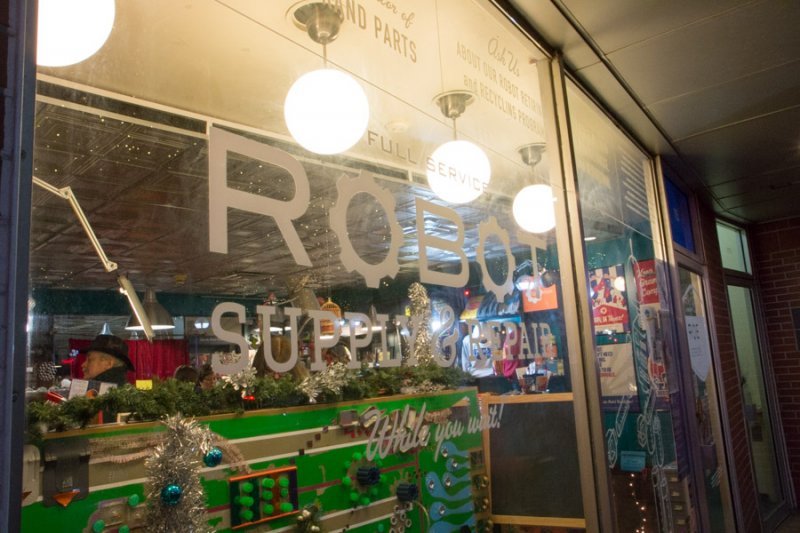 We were starting to feel parched, so we put our name on the list at Ann Arbor Brewing Company. The wait was hours long so we went to the Old German for a beer.

We made our way back to Ashley Street to the Old German for a beer. Someone in our party kept playing “Metal” on the juke box (is it even called that anymore?) and we were getting dirty looks from the bartenders and other patrons. So we only had one beer. 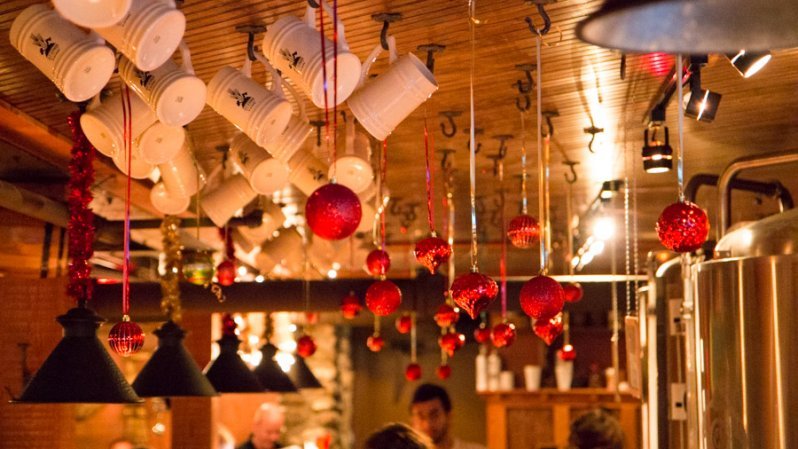 The metal music put us in the mood for Heavenly Metal! Plus a few in our party had gone to Kerrytown to check out KindleFest at the Ann Arbor Farmers Market. So it was time to head that way! 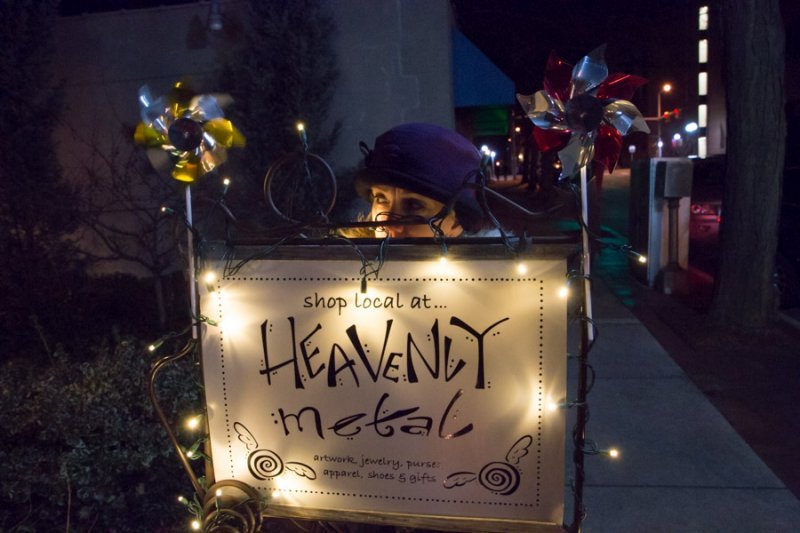 Chuck said after entering, “This is the best store ever!” Which prompted Vicki, the owner, to say, “Who said that?” They were immediately fast friends and she along with Jeff, helped Chuck select a beard bead. There was much discussion about how to thread the bead on the beard. Someone said, “No lick it, bend it and stick it in the hole.” This caused much laughter and more comments. It was time to leave Heavenly Metal. (Another theme… we can never stay too long in one place.) 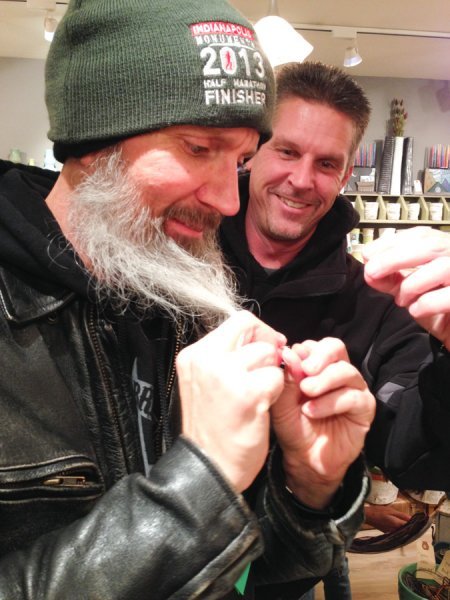 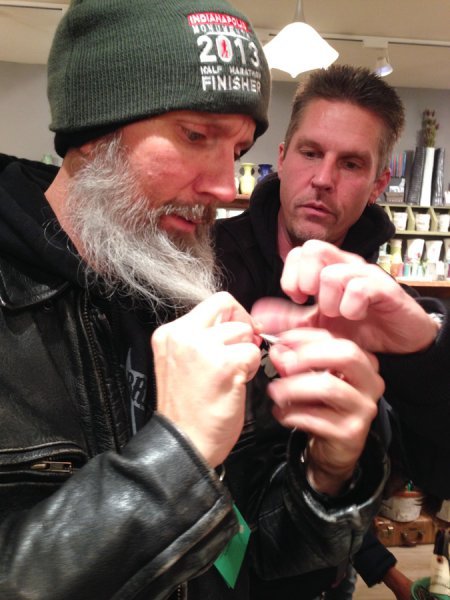 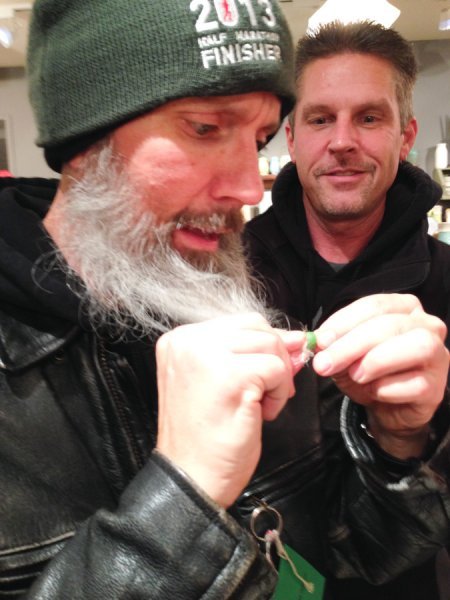 After the beard and bead incident we made our back to the Ann Arbor Brewing Company. Our table was finally ready so we had a nightcap and said goodbye to our friends.