We made a beeline for the beats at Soaring Eagle Arts Beats and Eats 2021 on a delightfully bright Friday in Royal Oak. 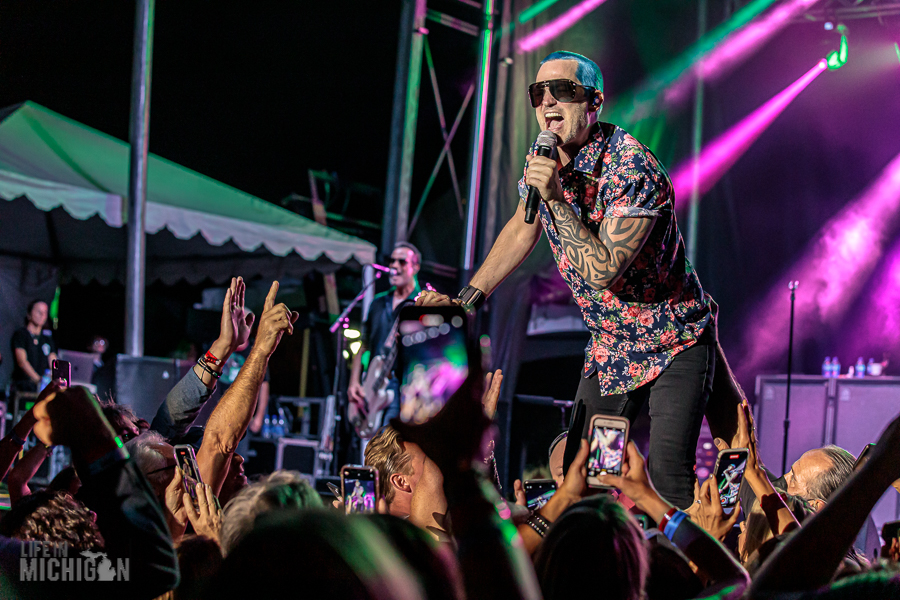 Due to the pandemic in 2020, Arts Beats and Eats went virtual. We had fun attending The Beats Go On drive-in show last year. This year with brilliant weather and vaccines on board we looked forward to Arts Beats and Eats 2021. We could only spare one day this year, so Friday it is.

The crowds were lively with plenty of people checking out the various food tents and trucks situated throughout the Arts Beats and Eats event space which consumes a few blocks of downtown Royal Oak. While there are plenty of arts to check out, our main draw is the beats.

With nine stages of country, R&B, folk, international, and rock, there is something for everyone. The hardest part is figuring out who you want to see. With so much music, choices have to be made as you can’t hear it all, no matter how much you want to. We don’t yet have the Harry Potter magical time-turner to allow us to be at two stages at the same time. We’ll have to see if we can dig one up for next time.

Knowing we had a full evening of music, our first stop was Lily’s Seafood Grill and Brewery for an early dinner and some Michigan made beers. The Sven & Ollie’s I.P.A. was fantastic with the Southwest Tuna burger. Brenda opted for white wine and the Merchant Man’s fish sandwich. Fueled and ready, we started our musical adventure. 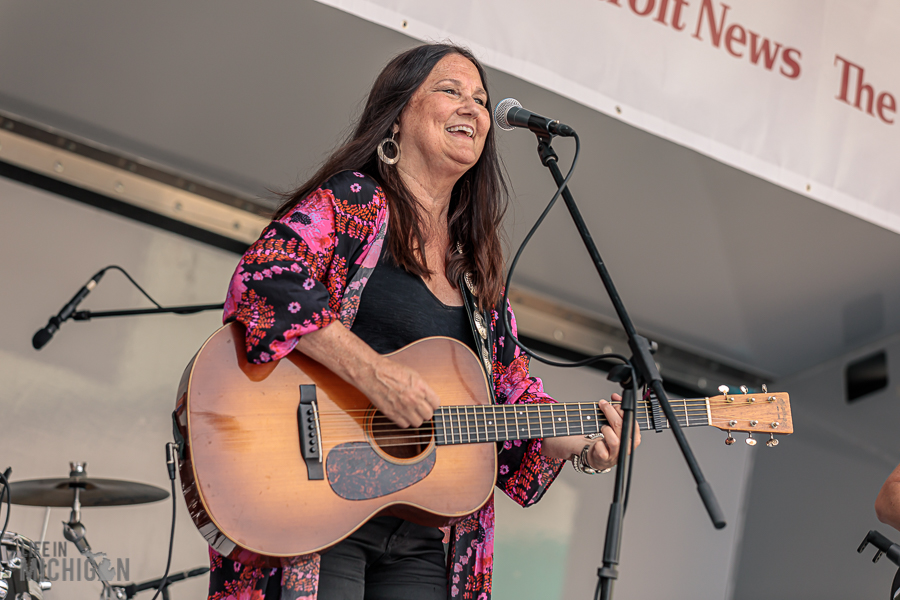 Judy is a great singer/songwriter on her own. However, the full band captures the amplified energy of the newer music on Judy’s Buffalo Motel album. Everyone in the band looked like they were having a ball and the music expressed their joy. The fans soaked up the magical sounds and vibrant sunshine making for a great start to our day at Arts Beats and Eats 2021. 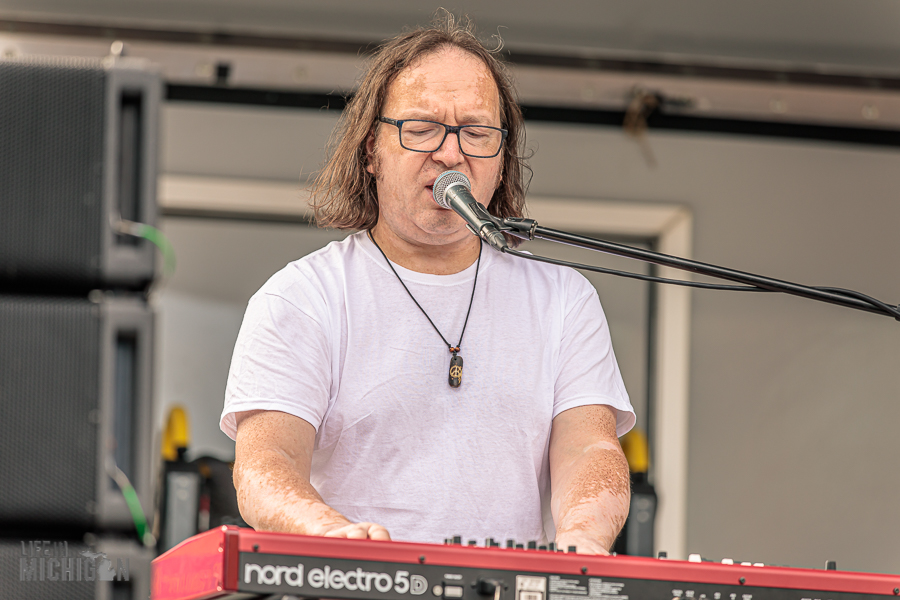 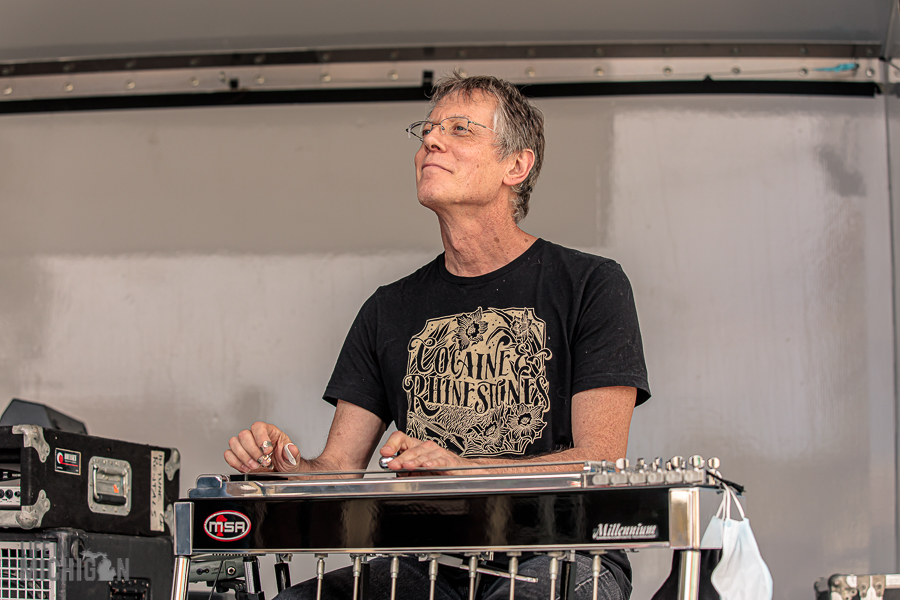 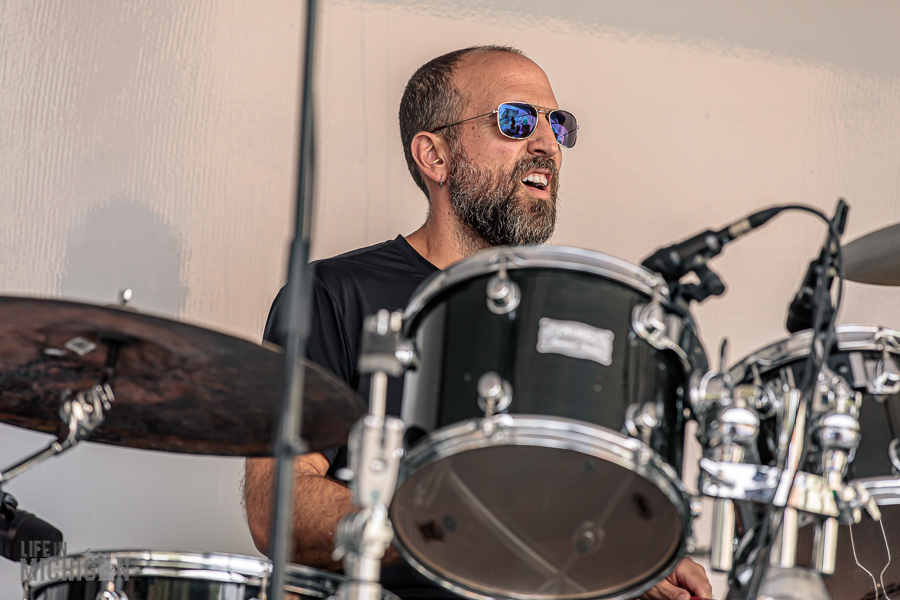 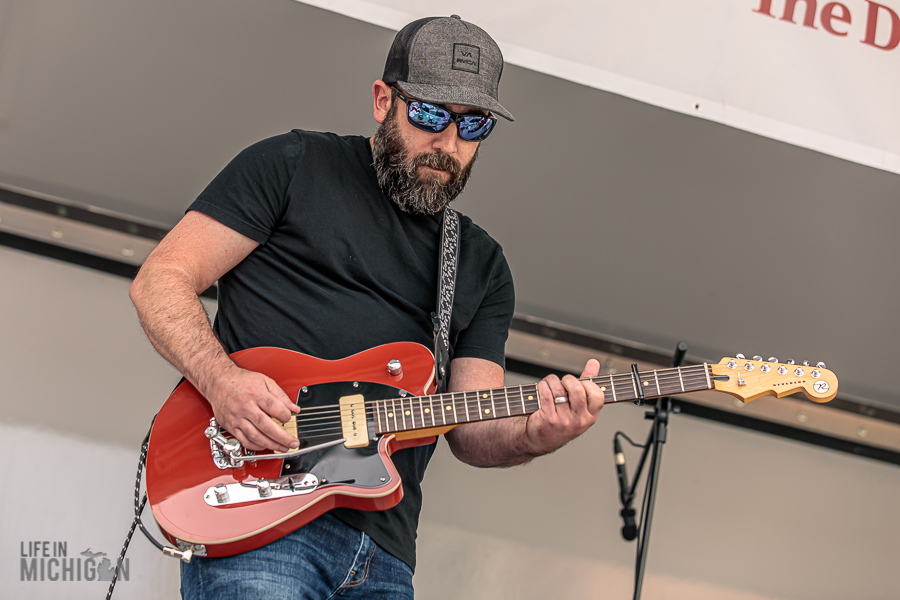 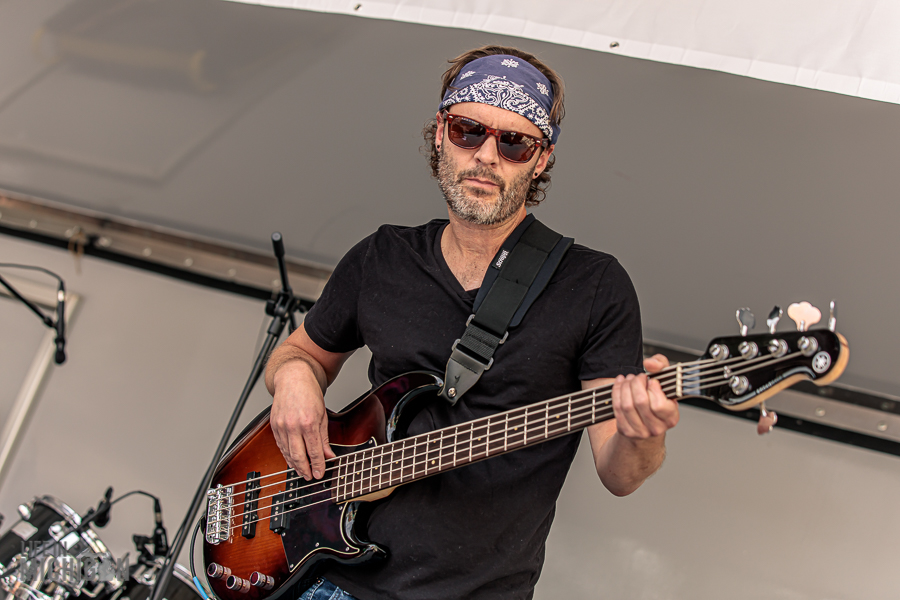 It has been a minute and a half since we’ve seen Chirp. Not because we don’t love them, but it seems like getting our schedule in sync requires perfect universe alignment. Thankfully, the stars aligned for us to catch Chirp at Arts Beats and Eats 2021. In case you don’t know, Chirp is Jay Frydenlund (guitar/vocals), Brian Long (bass), Sam Naples (guitar), and Gaston Reggio (drums). 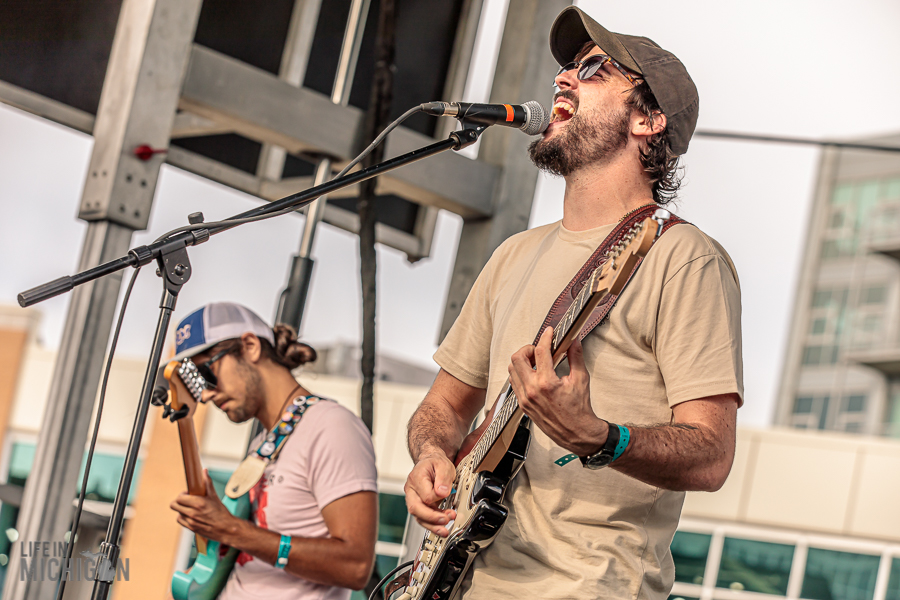 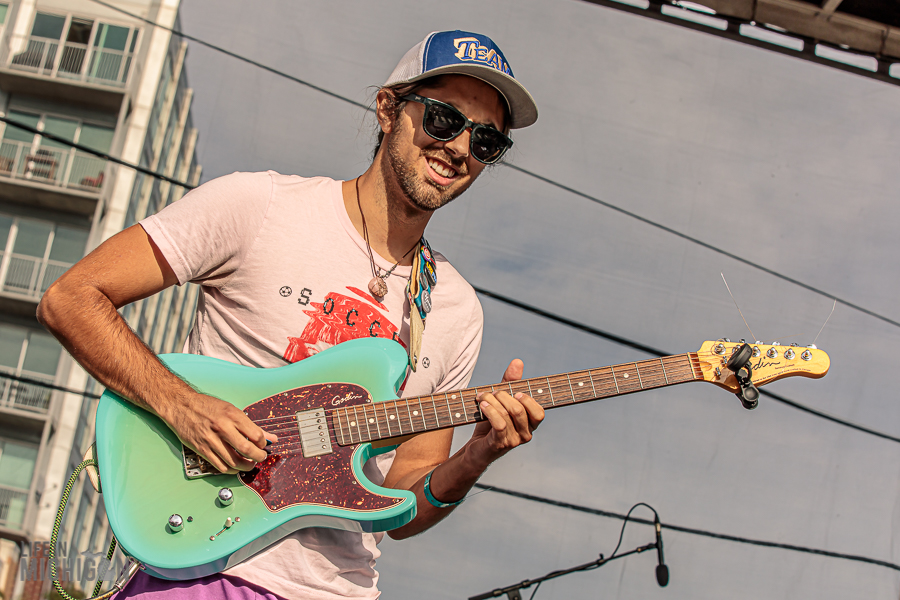 While I dig Chirp’s recorded music, they excel live. Their bountiful melody, gorgeous harmony, and Zappa meets Al DiMeola meets Parliament Funkadelic vibes were fiercely beautiful. The grooves had a few folks moving including the Soul Train dancer Spaghetti Man. Hell, I might have been shaking my moneymaker as I snapped a few pics. If you missed Chirp on this go around, hit their website to stay connected for the next gig. 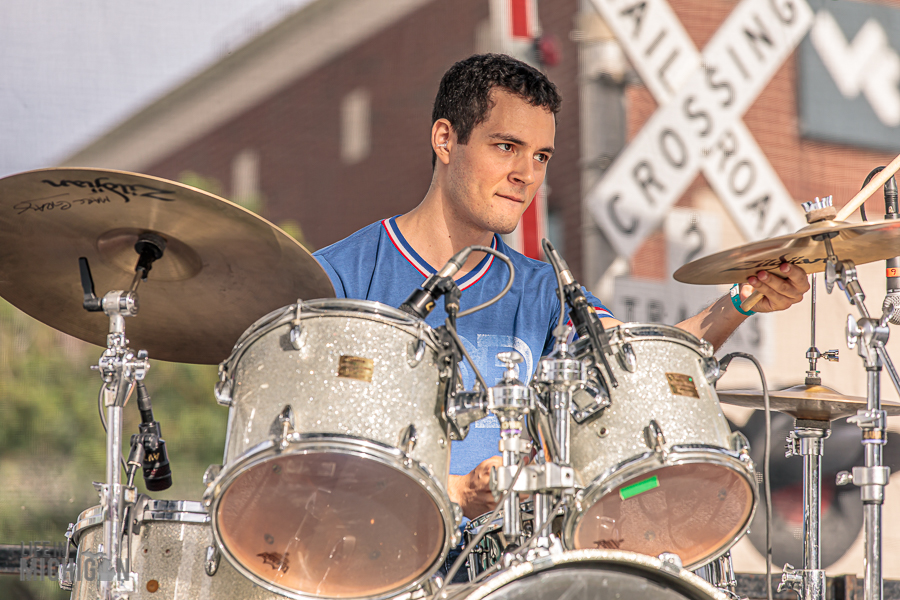 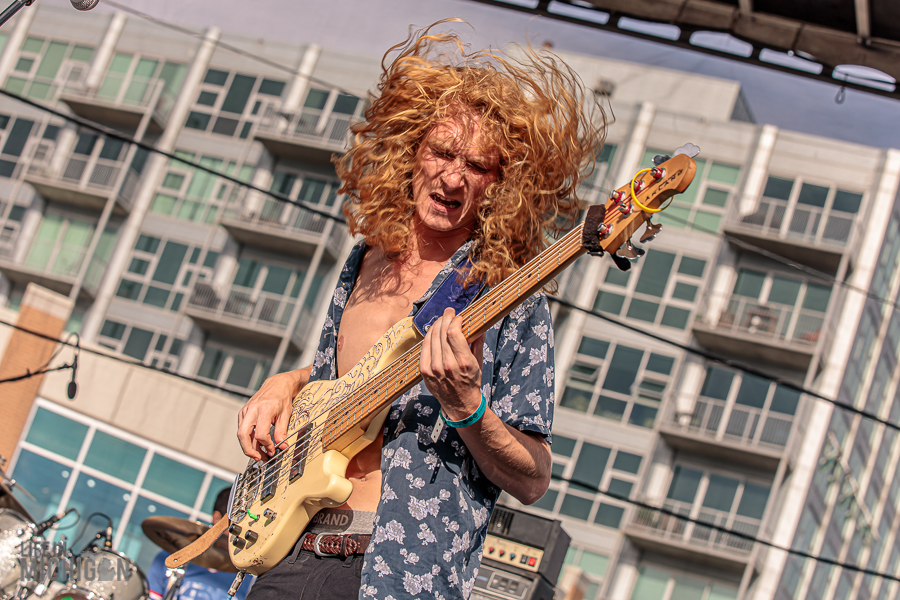 We first saw Thornetta Davis at the Ann Arbor Blues Festival in 2019. Yes, you read that correctly. We clearly missed the boat on Thornetta, but we are now firmly on board. Thornetta along with her phenomenal band including James Anderson (percussion), Carlton Washington (guitar), Joseph Veloz (bass), Rosemere Matthews (backing vocals), Roseann Matthews (backing vocals), Phillip Hale (keyboards), and Dave Marcaccio (drums) were on fire tonight at Arts Beats and Eats 2021 main stage. 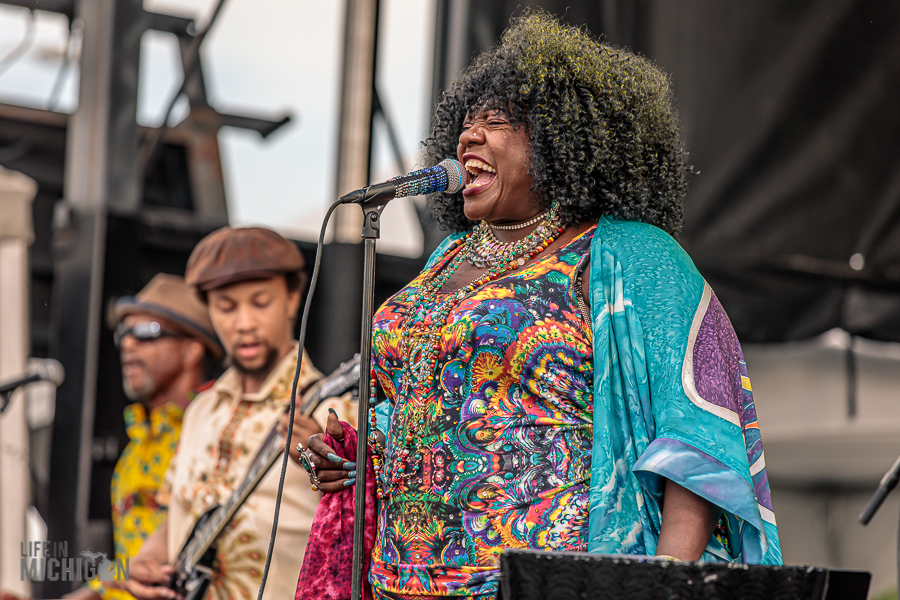 Thornetta leaned into her outstanding Honest Woman album with many choice cuts such as “That Don’t Appease Me”, “I’d Rather Be Alone”, “I Believe”, and “Honest Woman”. Everyone on stage was beaming and radiated with the joy of live music. I know I sound like a broken record, but hearing this music live is the best. The recordings are great for dancing at home, but nothing beats the live performance for emotional punch and magnetic energy. 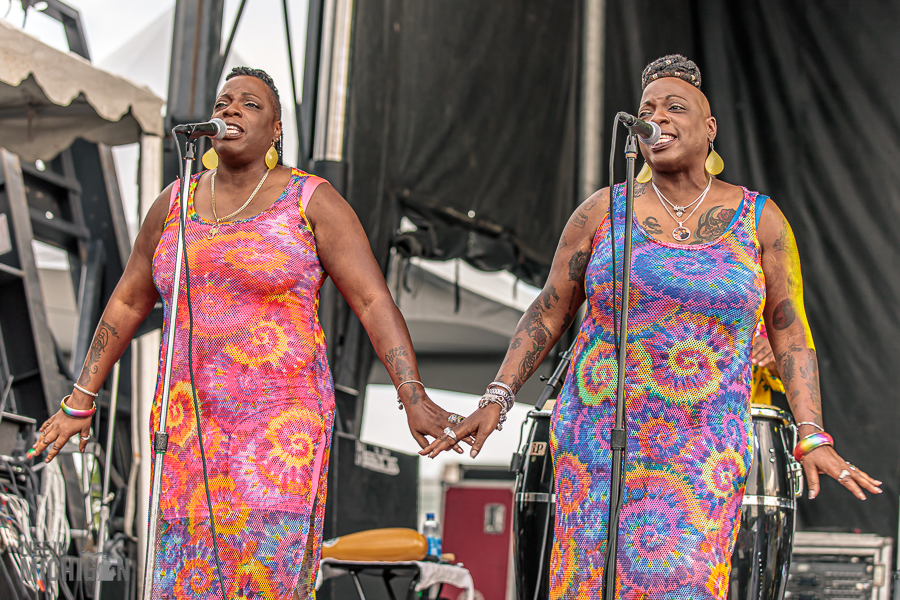 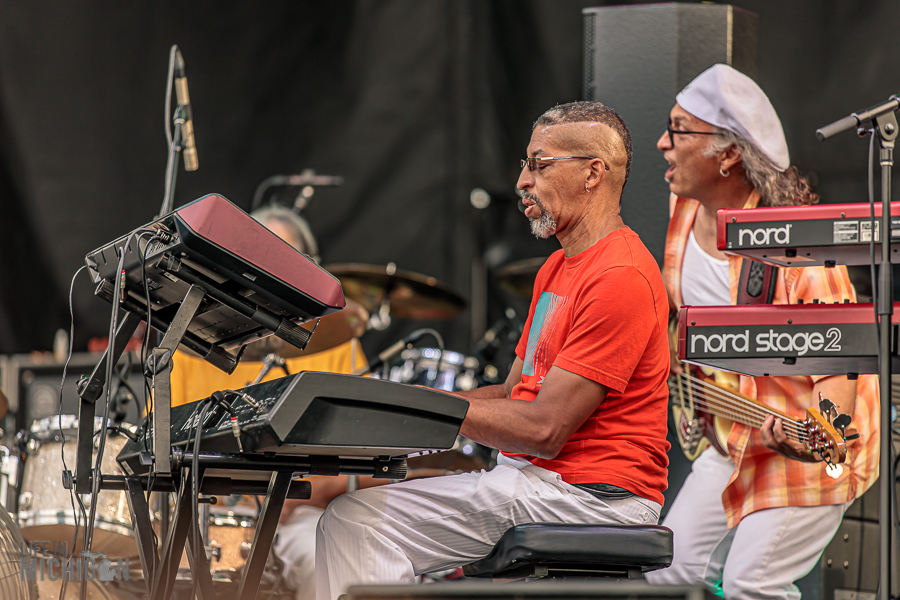 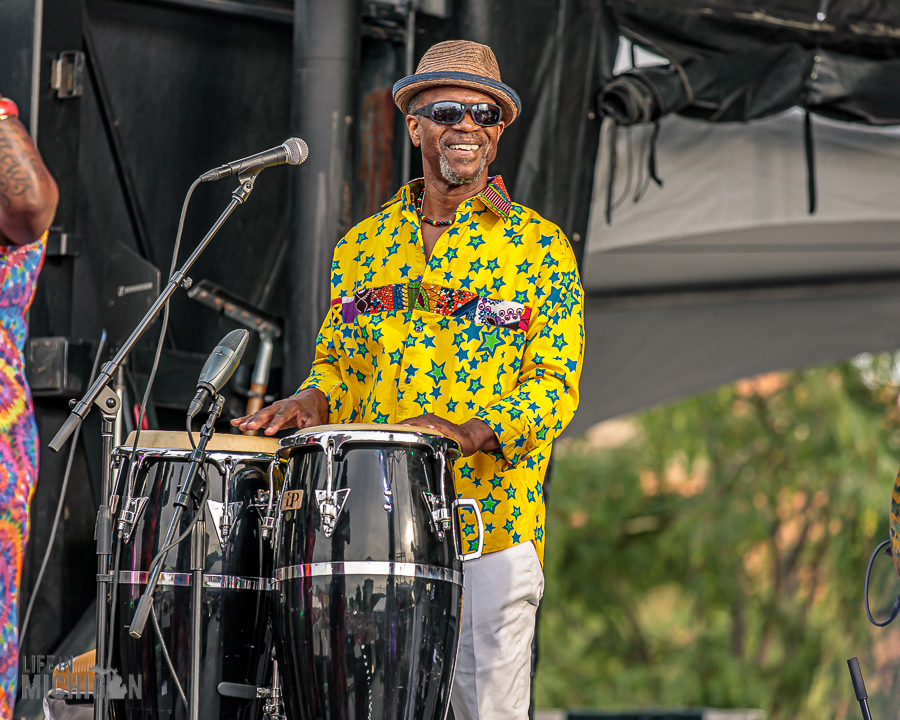 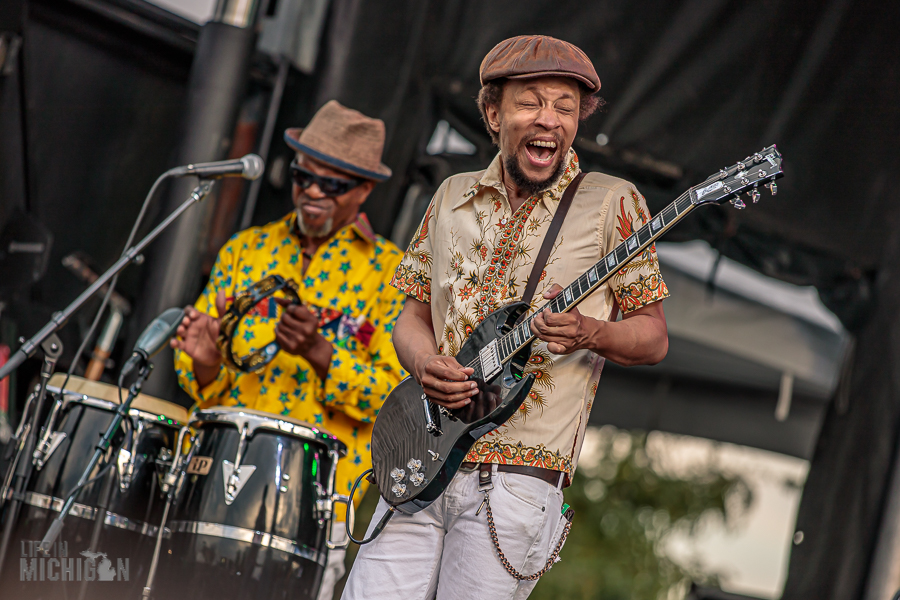 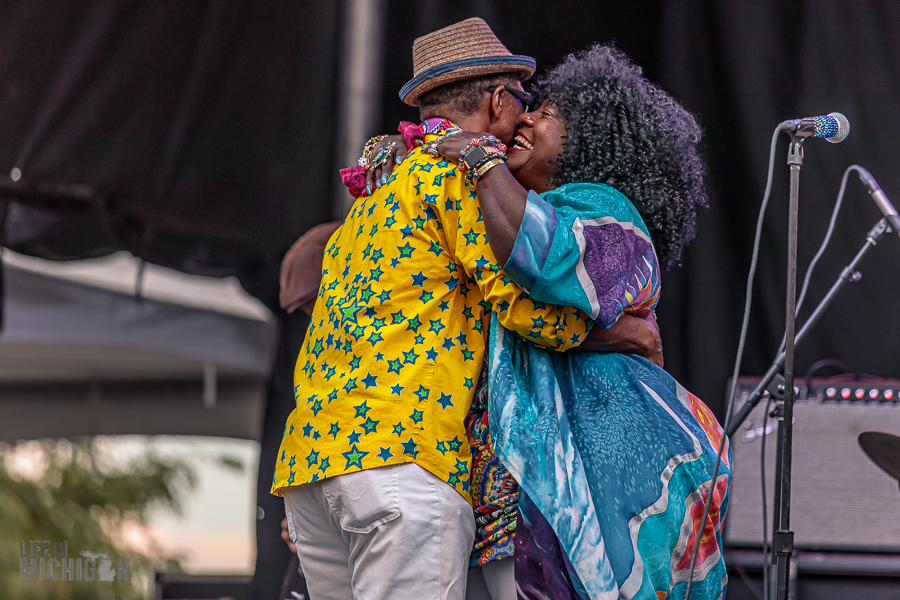 We enjoyed an unexpected surprise with The Guess Who. We actually planned to duck out and see the fabulous Nina and the Buffalo Riders before the upcoming Stone Temple Pilots. However, the main stage seating was getting tight, and given we had some choice seats, we stayed put. I have to admit, I’m glad we did. 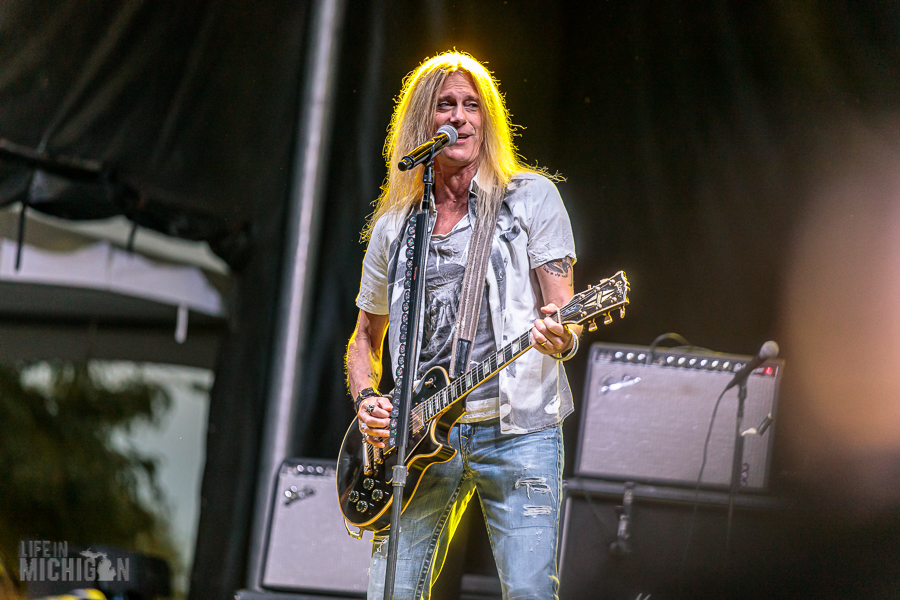 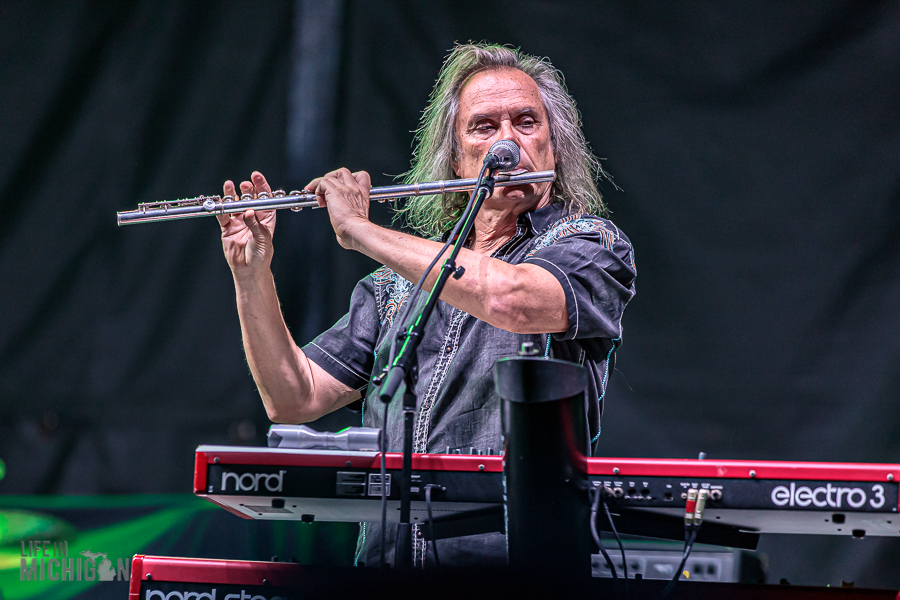 You probably have heard The Guess Who at some point unless you are under 30. This Winnipeg band has been cranking out hits since 1962. Although they really didn’t go by their current name until 1968. They rolled out the hits one after the other. We sang along to “Shakin All Over”, “American Woman”, “No Sugar Tonight”, “Undun”, “Clap for the Wolfman”, and “These Eyes”. 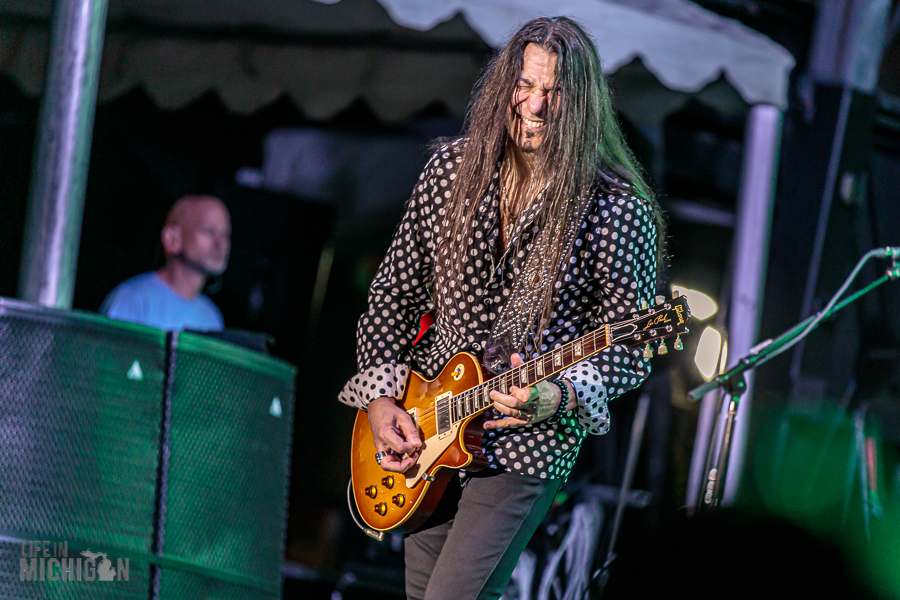 If you are a Superbad fan, I hope you remember the scene where Evan is trapped in the room at the party they crashed with the coke boys. They think he is someone’s brother and wants him to sing. Evan busts into “These Eyes” complete with squeaking high notes. I laughed out loud thinking of that scene and regaled Brenda with it the next day. 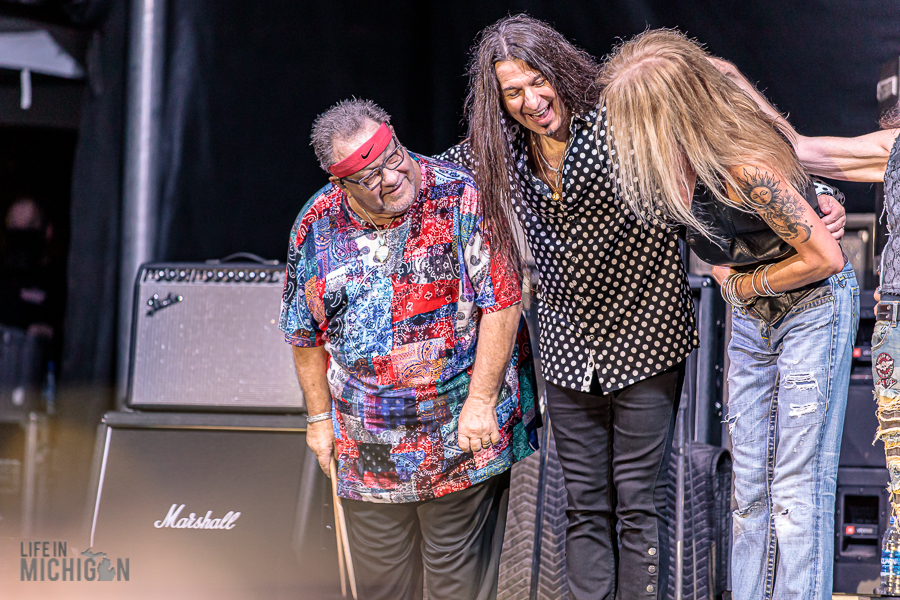 In case you are wondering, The Guess Who are Derek Sharp (vocals/guitar), Michael Staertow (guitar), Rudy Sarzo (bass), Leonard Shaw (keyboards/brass), and Garry Peterson (drums). Gary is the remaining original member. And yes, THE LEGENDARY Rudy Sarzo who has recorded and jammed with Ozzy, Dio, Whitesnake, and Quiet Riot along with a ton of other bands is in The Guess Who. The Guess Who were super entertaining and put on one hell of a show. 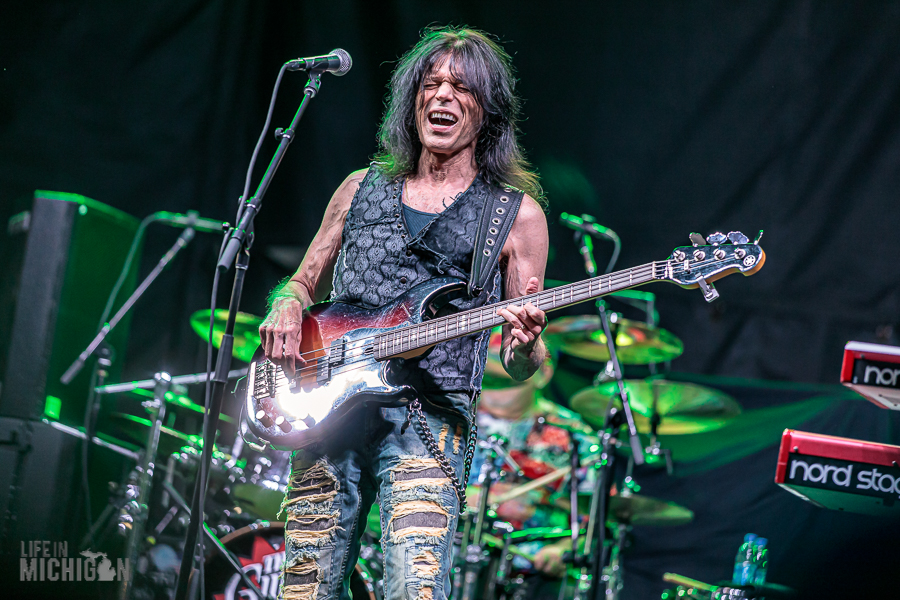 When we heard that Stone Temple Pilots would be playing Arts Beats and Eats 2021, we jumped on tickets. We’ve been fans of STP since they started back in 1993. I loved their music and completely enjoyed seeing them live a few times with their late singer Scott Weiland. We could not have been happier when STP picked up Michigan native Jeff Gutt to handle vocals. I had the good fortune to review the self-titled STP album for Metal Wani and they didn’t miss a beat. It is pure STP gold. What we had not experienced yet was Jeff at the helm of the older music. 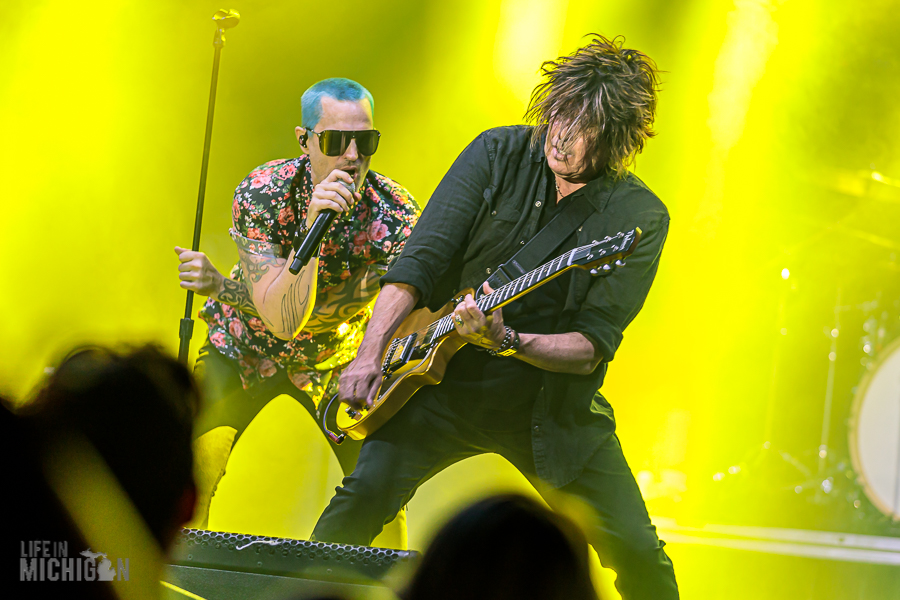 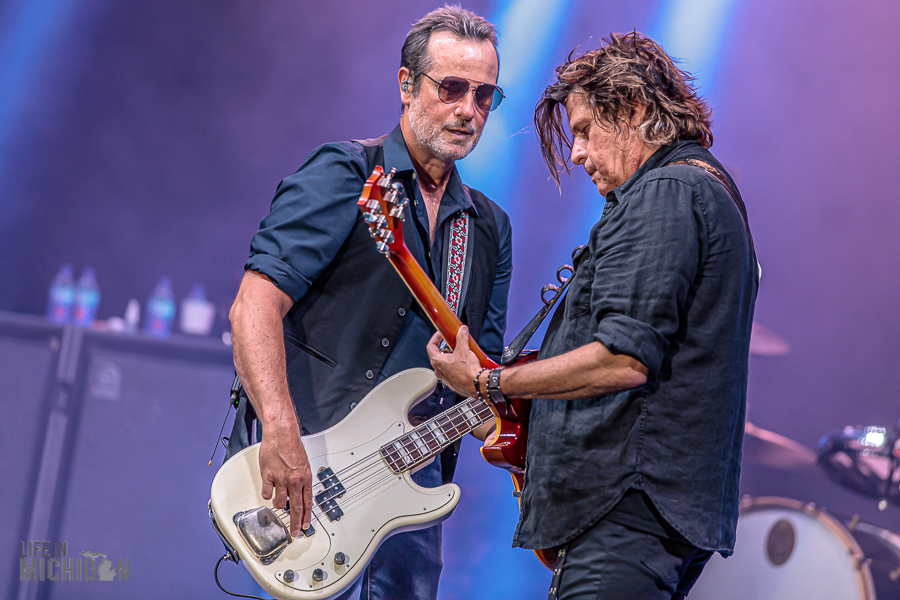 From the first notes of “Wicked Garden”, we knew this show was something special. In some weird way, I’d forgotten how much I dig the music of STP. This is probably due to the fact that with the exception of the latest albums, all my STP is on cd. In recent years, I’ve switched back to a vinyl nerd. As I was rocking out to the show, I made a mental note to remedy the situation with some STP vinyl purchases. 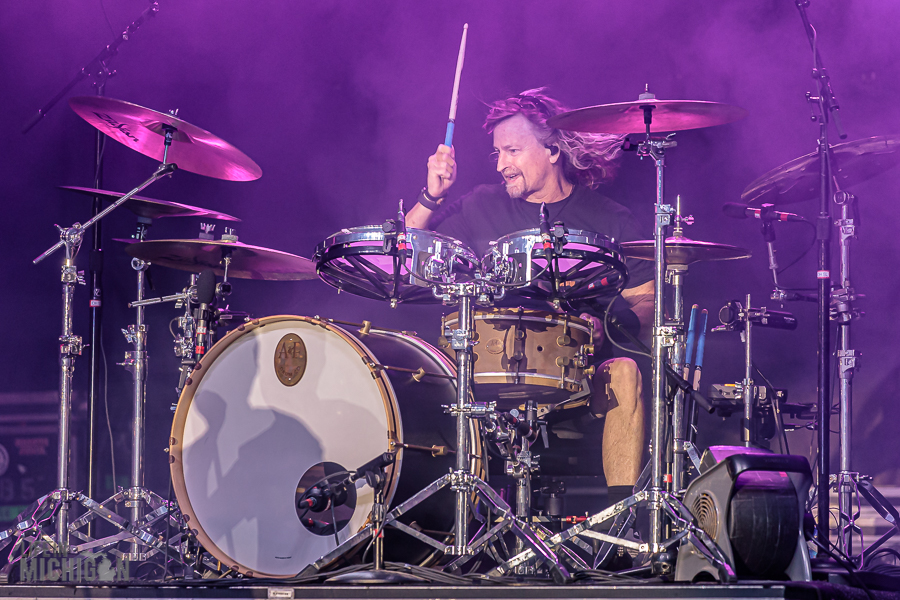 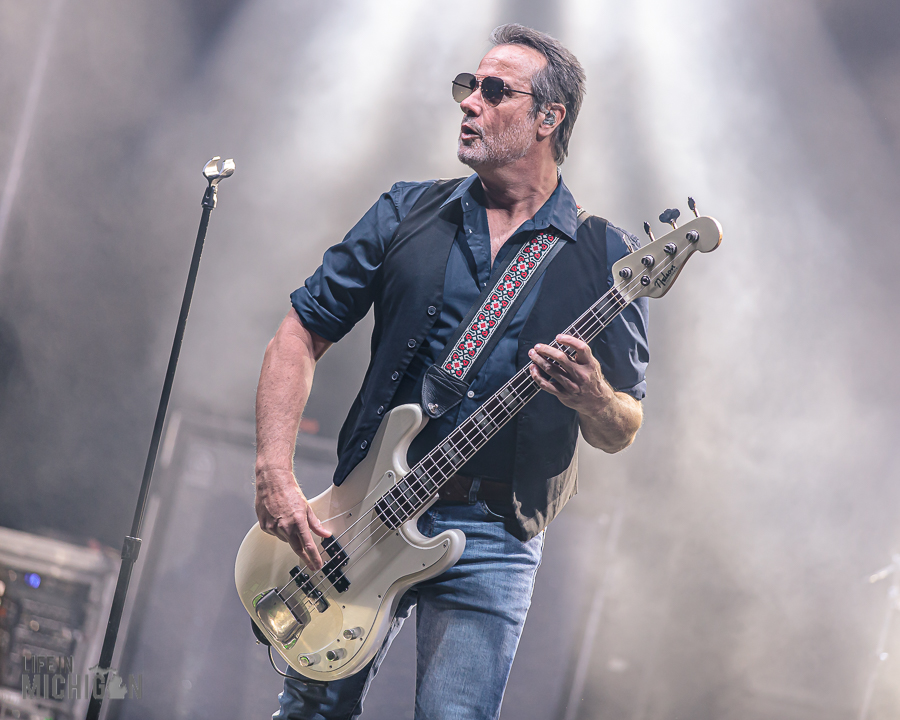 Brothers Dean (guitar) and Robert (bass) DeLeo along with drummer Erik Kretz and Jeff Gutt unleashed one fantastic song after another. I nearly lost my mind when they kicked into “Vasoline”. STP tapped heavily into their Core and Purple albums. Songs like “Sin”, “Silvergun Superman”, and “Crackerman” had us juking and jiving. “Meadow” from the newer self-titled album fit the set like a glove. The guys in STP commanded the stage. I could swear that Robert and Dean were staring right at me with a bit of a grin. Jeff with his brilliant blue hair and mirrored shades was commanding and iconic. 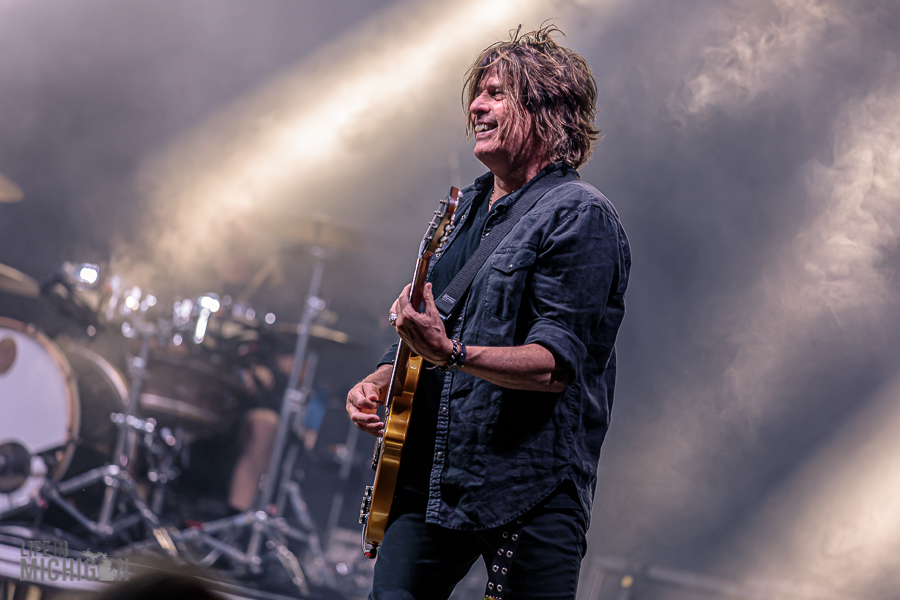 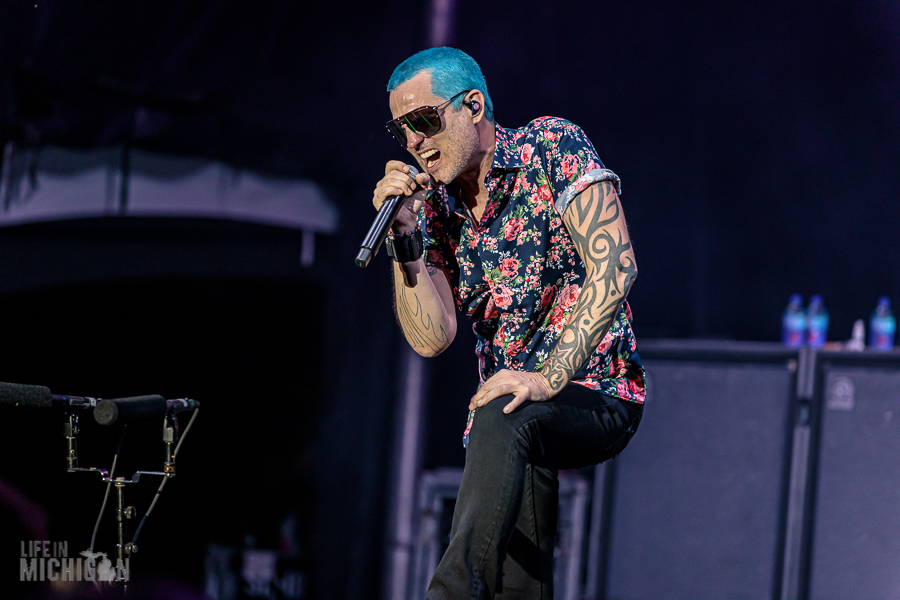 Our buddy Jeff nearly lost his footing as well as his mind dancing and roaring to “Dead and Bloated”. Thankfully the kind woman next to him caught him. STP finished up their set with the supernova cosmic energy blasting out of “Trippin’ on a Hole in a Paper Heart”. After a quick break, they finished up their set with “Piece of Pie” and “Sex Type Thing”. We were hoarse, breathless, and elated. 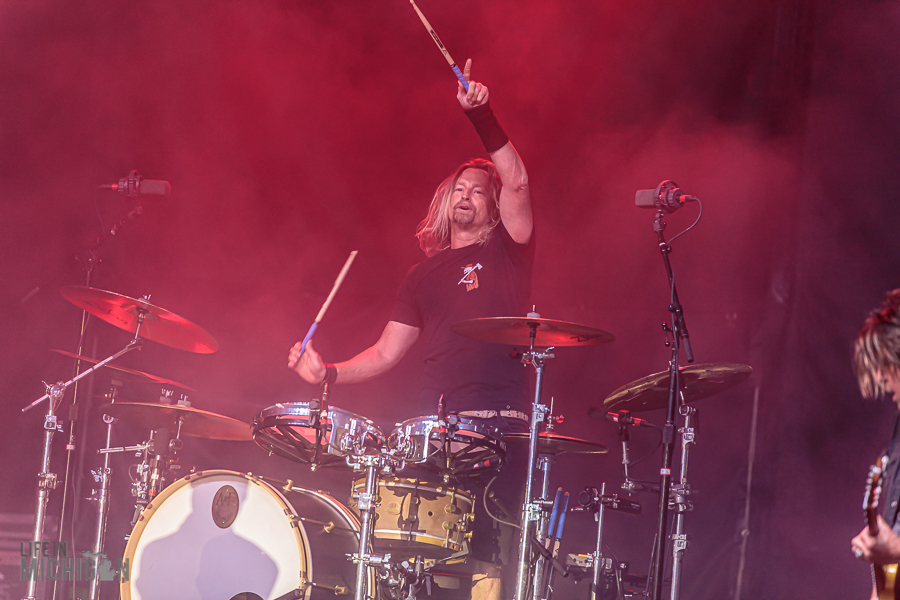 Stone Temple Pilots capped a marvelous day of music at Arts Beats and Eats 2021 leaving us reveling in bliss. We’ve got galleries for Judy Banker, Chirp, Thornetta Davis, The Guess Who, and Stone Temple Pilots. Drop us a comment if you were there. What part of the festival did you enjoy most? 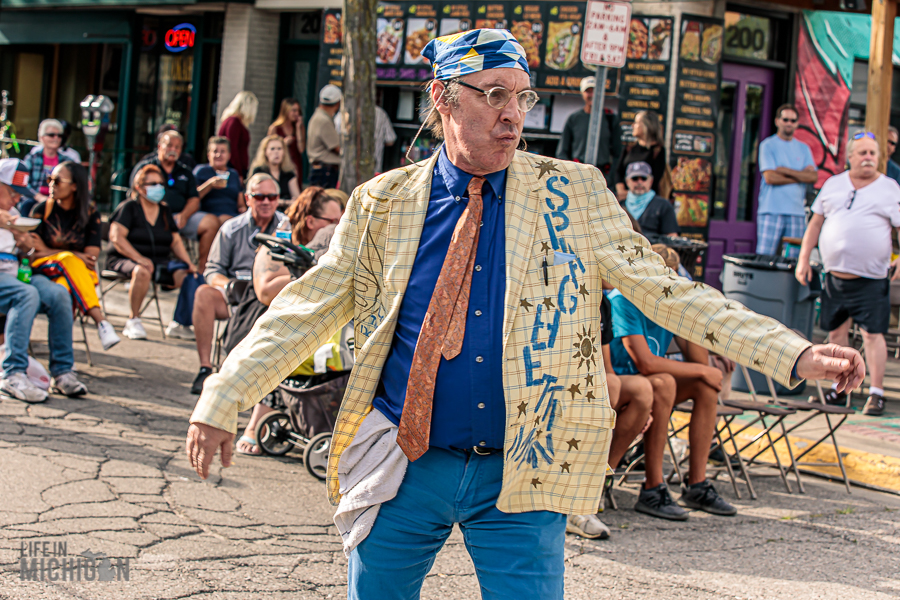