Lula King was born on February 23, 1895, in Camden, Ohio and died on May 10, 1964, in Farmington, Michigan as Louise Catherine Brown. She died several years before I arrived but I’ve always felt her influence. This is probably why Lula has always intrigued me. Betty (my mother) didn’t share many stories about her mother, Lula. Occasionally she’d drop a comment and I always had a feeling there was more to the story. Like this picture for example, there has to be more to this story. 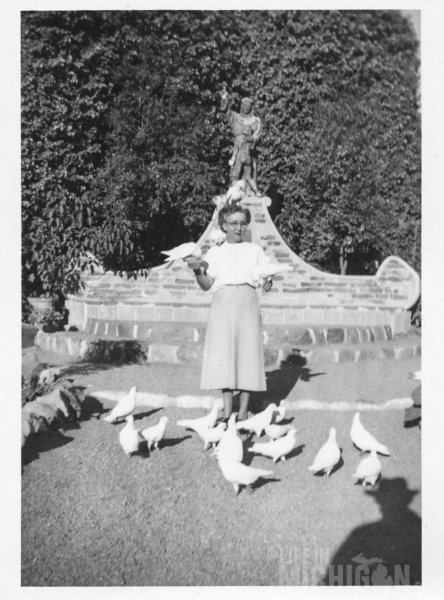 (Lula Brown on vacation in Arizona in the 1950s)

My impression of Lula Brown? She was a tough lady and a bit of a fashion diva. Her husband, Albert, pampered her and kept her on a pedestal. I’ve been told that she was a devout Catholic and went to mass every day. I suspect she had a quirky personality and was very opinionated. I have nothing to support my impressions, only my inferences from Betty’s comments and the Lula Stories I’ve collected from my cousins, siblings and my aunt Alice. I have stitched these together with Lula’s pictures, newspaper articles and postcards to create a mini-biography.

Where to start? Her name is a good place. She was definitely given the name of Lula King at birth. Her name was listed as Lula King on her birth certificate and in the 1900 and 1910 Census. By 1917 she’d made the switch to Louise Catherine King, as this is the name listed on the marriage license to Albert Francis Brown. Aunt Alice says that Grandpa Brown always called her Lula. Betty (Lula’s daughter) shared with several family members that Lula used several names and was mad as a wet hen when she discovered that her birth certificate listed her name as Lula. She discovered this when she applied for Social Security Benefits. Her death certificate and headstone both list her name as Louise Catherine Brown. I guess she got the final say on that one. 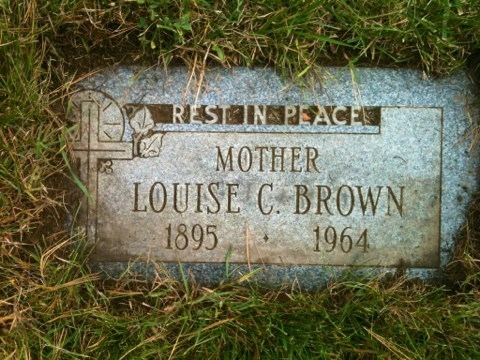 As long as we are talking about names, Kris Smith, my sister, shared with me that together Betty and Aunt Alice made a list of their favorite names and used it to name their children. She also said that our middle names were after one of our relatives.

Excuse me this works except for Martha Jane? Who is Jane? Does anyone know? 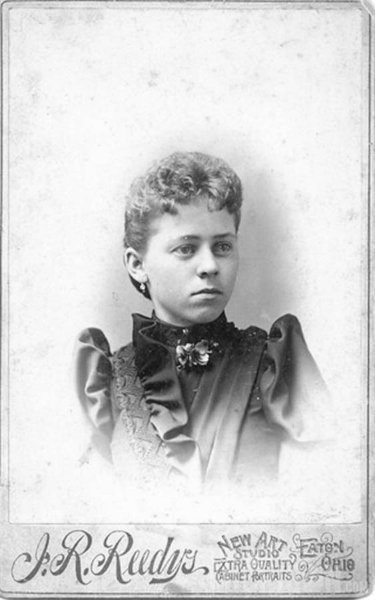 Abbie, as I’ve seen her name listed, was born in Preble, Ohio in 1873. Her parents Thomas Bernard Weadick and Mary Jane Lett were both born in Wexford County, Ireland. Well I think we just solved the Jane mystery. There are some good genes here! Thomas was 90 when he died and Mary Jane was still kicking around. 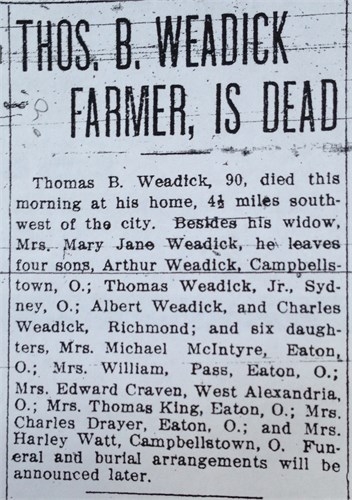 Abbie (Lula’s mother) married Thomas King on April 5, 1894. This was Thomas’ second marriage. He was from Virginia and it looks like his family had been there for a good while. Things get a little sketchy, but I think his forefathers made their way to the United States from Ireland and Scotland in the mid-1700’s. They were here for the Revolutionary and Civil Wars. Before we digress too much, lets get back to Lula and her parents, Abigail and Thomas King. I bet Abbie was the reason that Lula was a devout Catholic since both her parents were from Ireland. What do you think? 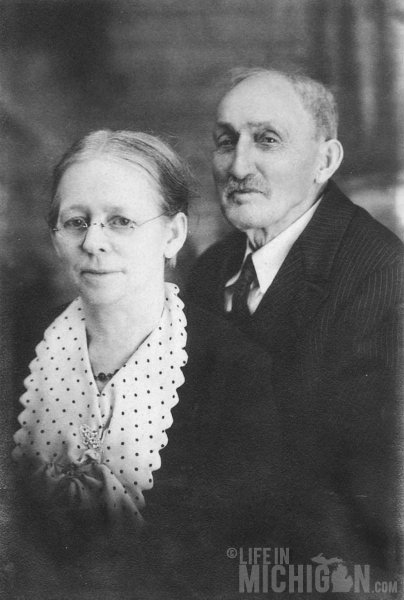 Abbie and Thomas had seven children together: Lula, Helen, Mary, Thomas, Joseph Roi, Virginia and Samuel. Lula also had a half-sister, Mae King and two half-brothers, Ora and Harry. These were Thomas’ children with Rebecca Clark. Now hang on, I am headed somewhere with all these names. Mae King, Lula’s half-sister married Charles Edgar Baughman on July 19, 1902. Sadly, May King Baughman committed suicide in 1934.

This is a little hard to read so here is the translation:

Mrs. Edgar Baughman, 51, of Ingomar committed suicide last Wednesday afternoon at their house by tying one end of an overall suspender around her neck and tying the other end to a rafter, then throwing herself down the back stairs. Her lifeless body was found when her husband and other members of the family returned from a funeral around 4 o’clock.

Mrs. Baughman had been in ill health for about two years ago and was reported to have attempted suicide by slashing her wrists with a razor. She had not been left alone since that time but her condition seemed improved and the family went to the funeral.

She was well known in the Ingomar community. Survivors include her husband; three sons, Emory, Clyde and Harold; her father and four grandchildren.

Take a deep breath. That is a lot of information but there is another twist to the story. Mary King married her half-sister Mae’s husband, Charles Edgar Baughman, in 1937, three years after she’d committed suicide.  I know, it is a complicated story. Apparently Lula resented her sister Mary’s marriage to Edgar but more about “Little Mary” later in the post. 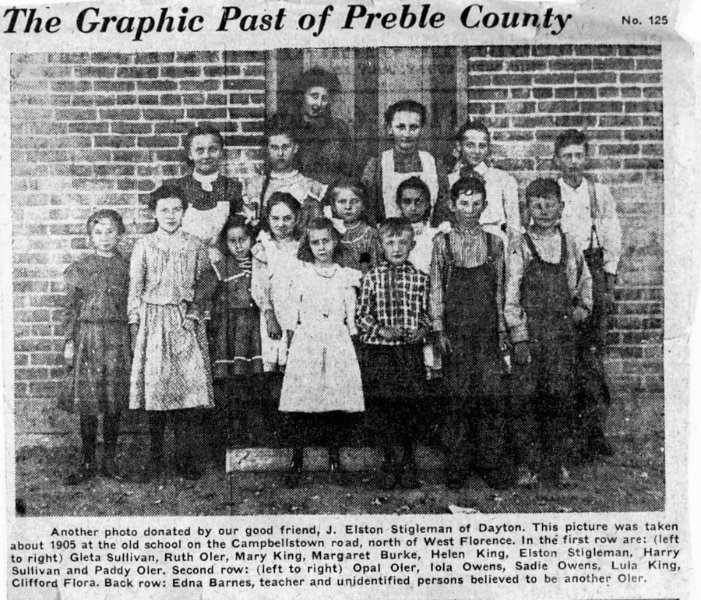 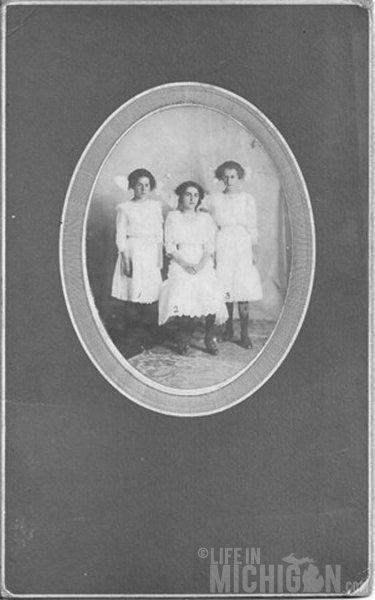 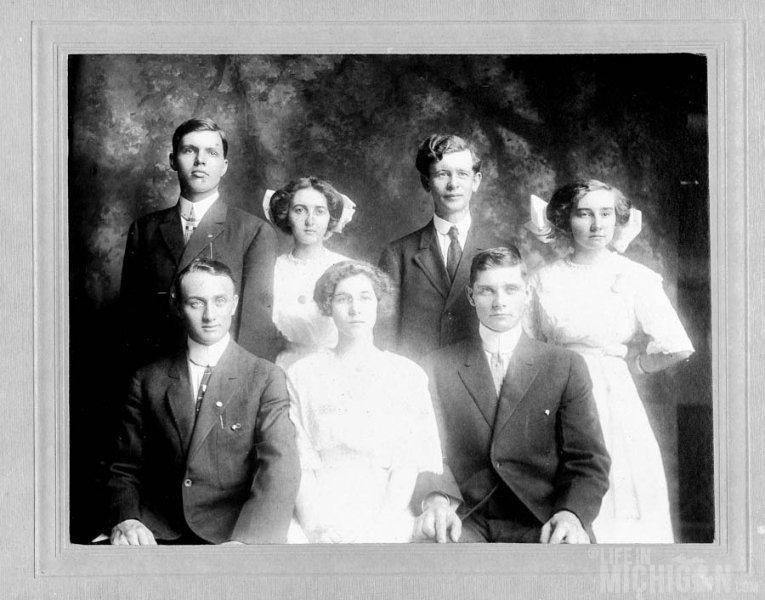 Lula King’s graduating class – April 27, 1912, Jackson Township High School in Campbellstown, Ohio. She is the First girl from the left in the back grow.

Where exactly is Campbellstown, Ohio?  The “A” marks the spot. 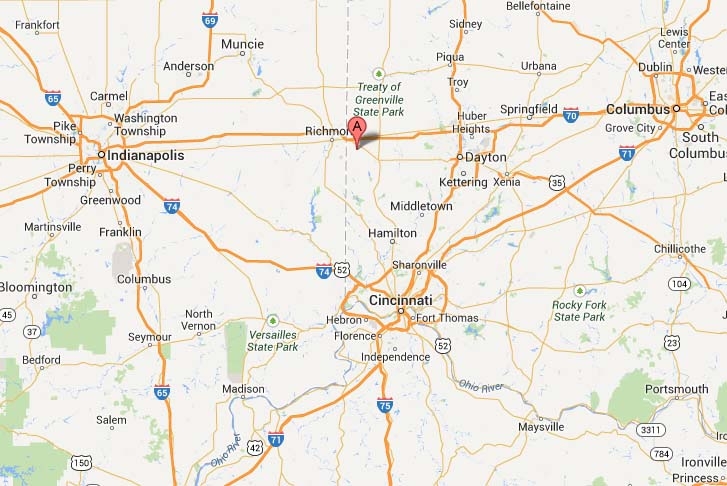 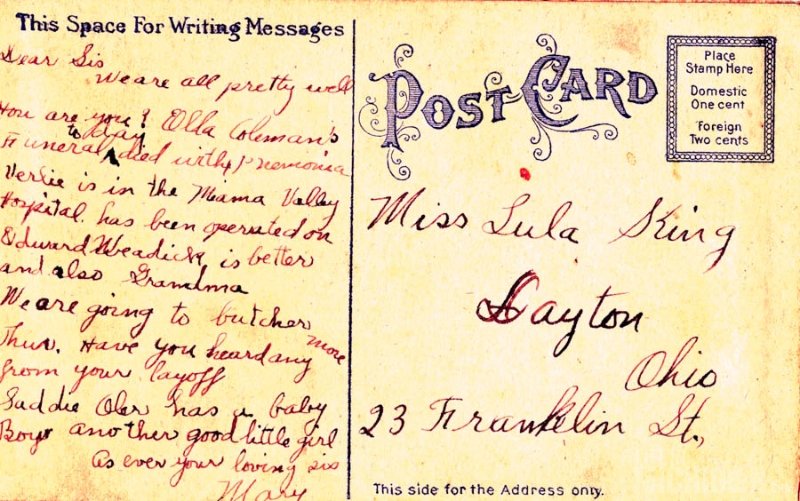 Lula is the woman in the middle. You have to wonder what these women were up to in Put In Bay, Ohio. 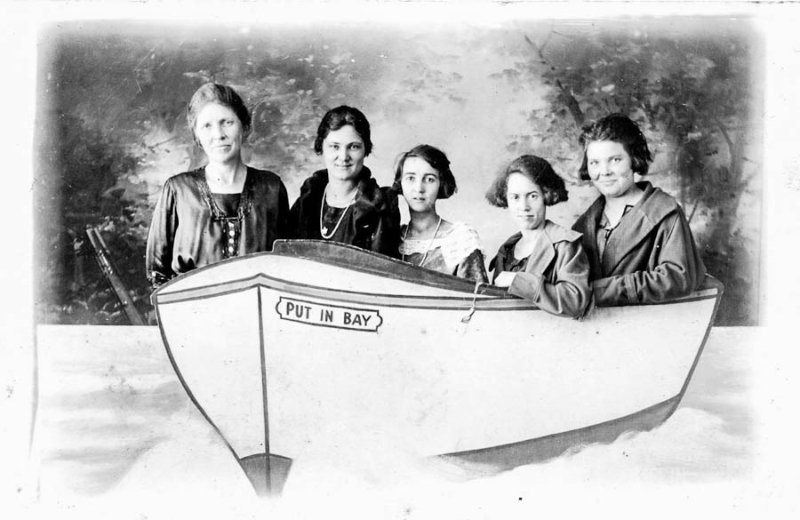 How or when Lula met Albert remains a mystery. Albert sent Lula a postcard from Davis City, Indiana. Lula was living at the Loretto Guild which was a boarding house for Catholic Women. He writes that he came to celebrate the election of Hughes. I’m pretty sure Hughes lost the election to Woodrow Wilson in 1916. I guess Albert was a republican. 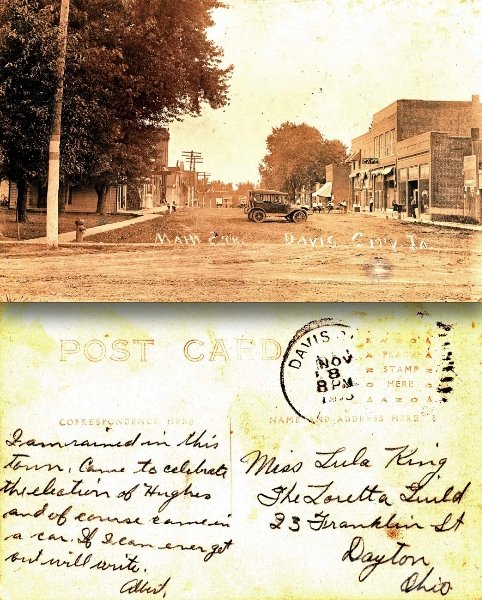 I’m not sure who sent Lula this card but the important content is written along the side, “Congratulations on your Diamond Ha!” 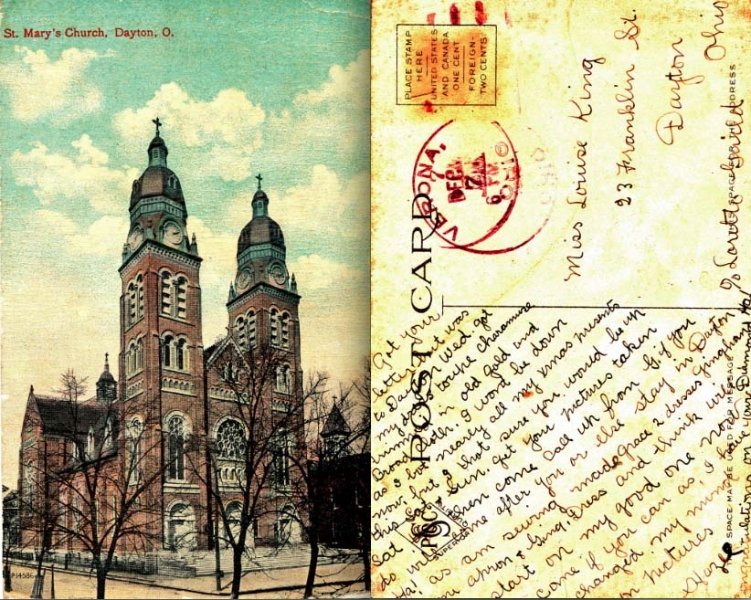 Louise Catherine King married Albert Francis Brown on April 17, 1917, in Preble County, Ohio. They are listed in the 1920 Census as living in Stronghurst, Illinois. Albert’s family lived in this area. There are lots of details about his family and their origins in the Brown Family History post.

Lula and Albert’s first son, Thomas Edwin Brown was born on May 3, 1918, in Iowa. He was born while they were visiting Albert’s family in Des Moines. They were having dinner when her water broke and she was mortified. She looks so young and Tom looks so BIG. 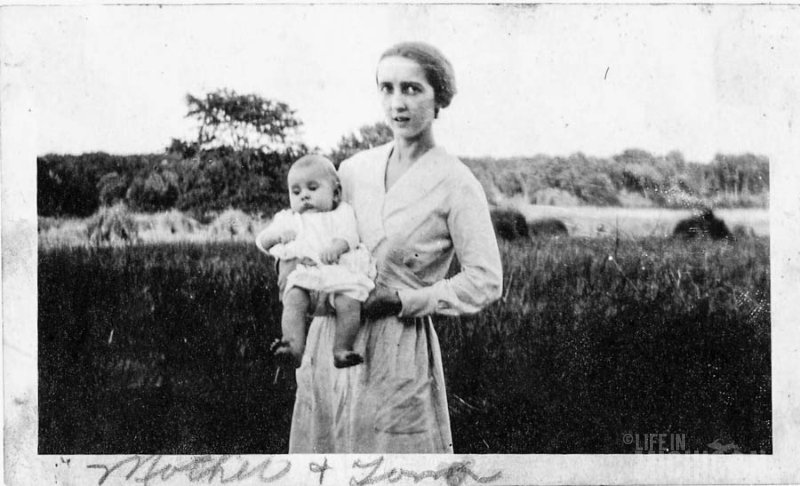 They moved to Michigan after completing the 1920 census, where they are listed as still living in Illinois but before their second son, Milner Francis Brown was born on May 25, 1921, in Detroit, Michigan. I think Tom might need to pee. 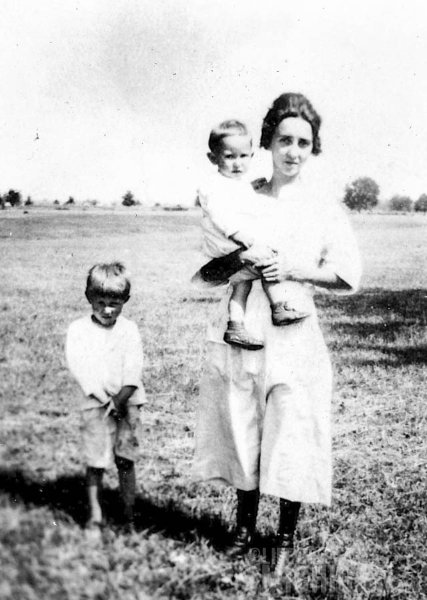 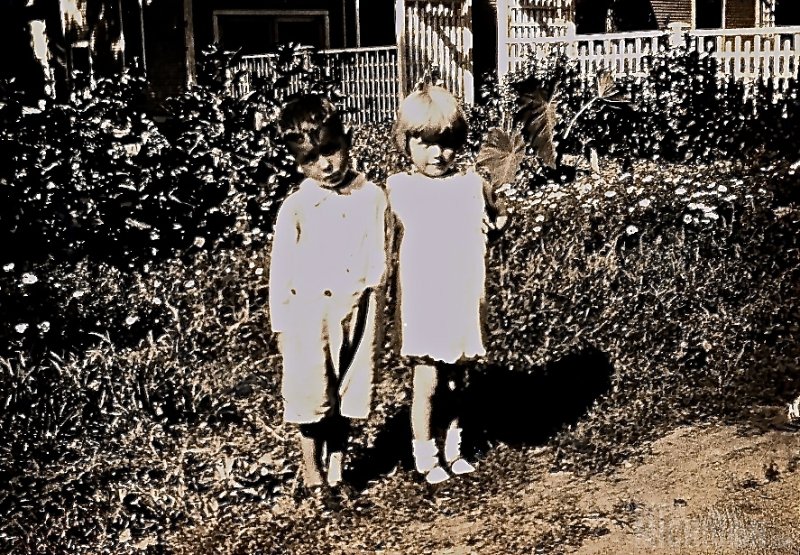 Mary King Baughman, aka as “Little Mary”, had a crackly voice and was a sweety, says my Aunt Alice. Little Mary was recruited to help Lula with her passel of kids. Looks to me like Lula needed some help! 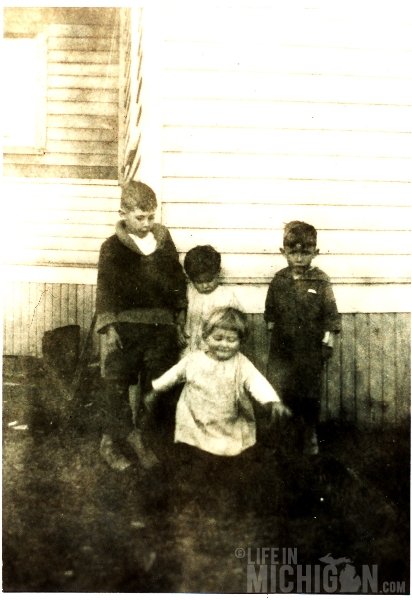 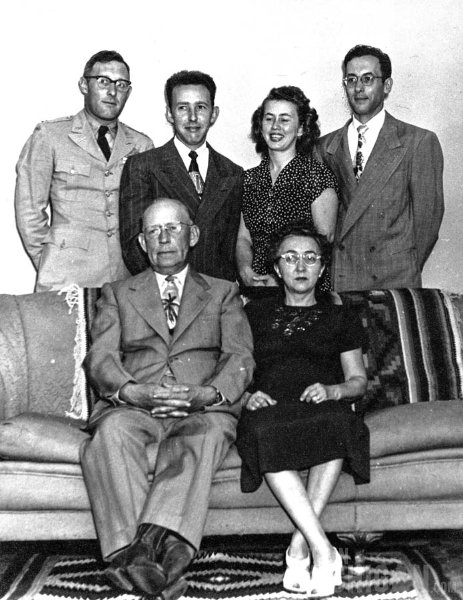 Who are you Lula Brown?

I have so many questions!

For instance, what was it like to visit Lula’s house? 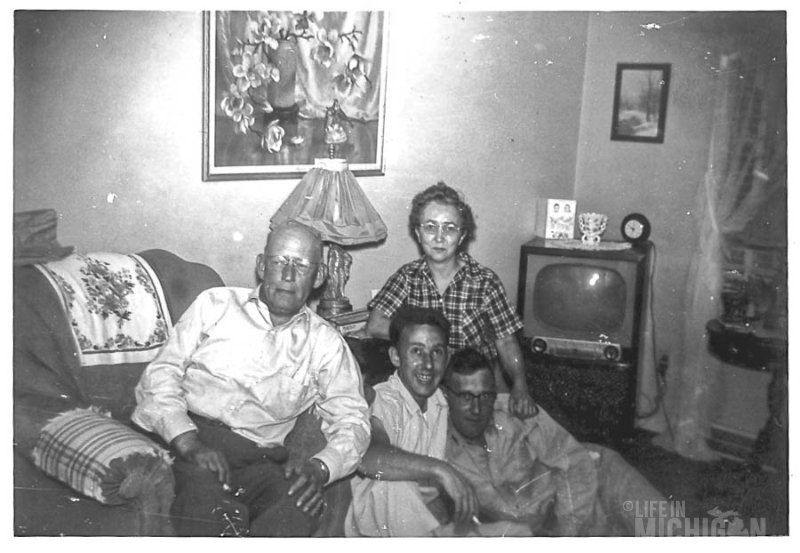 Did you work outside the home?

Lula worked at the Kresge lunch counter, and for many years at a catering service in Farmington at Middlebelt and 9 Mile. Lula also did ironing to earn extra money. There is a family story about their home in Michigan. Albert did not want to buy a home so Lula saved her money from ironing. When she had enough she purchased land, saved again and had the house built. During the construction she took Albert by the property and told him it was theirs. Aunt Alice says that Milner bought the house on Shiawassee but I like the idea that she surprised him by buying it and having it built. The basement was dug using a team of horses where Lula kept a nice pantry of canned food from the garden along with the chinchillas.
Yes chinchillas. Lula and Albert raised chinchillas to make extra money. They would let their grandchildren pet them when they visited. Rumor has it that the chinchilla business wasn’t very lucrative and didn’t last too long.

Did she have any pets?

Lula loved Jenny, her Mexican Chihuahua. All of Lula’s grandchildren have agreed that Jenny was an awful dog. Lula cooked special food for Jenny, who disliked kids but liked chicken livers. Lula and Albert bought a hassock to hold toys for when the grandchildren visited. It never had toys for the kids. Lula cut a hole in the side of the hassock for Jenny. I’m told the grandchildren would chase Jenny into the hassock and roll it on its side with Jenny in the hassock yipping away.

Was Lula a “huggy” person?

Lula wasn’t affectionate- not warm and fuzzy – but she enjoyed her grandchildren and got along great with Albert, her husband of nearly 42 years. 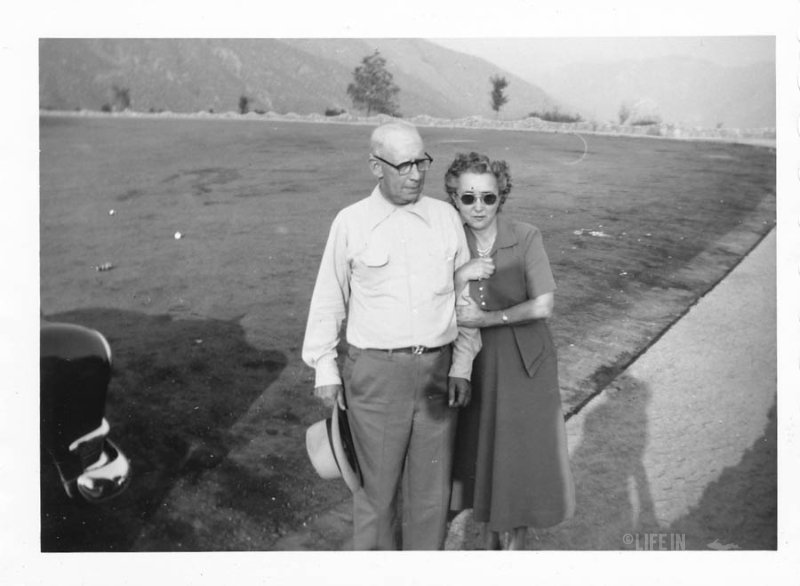 They were very close.  Albert was laid back and very easy going. 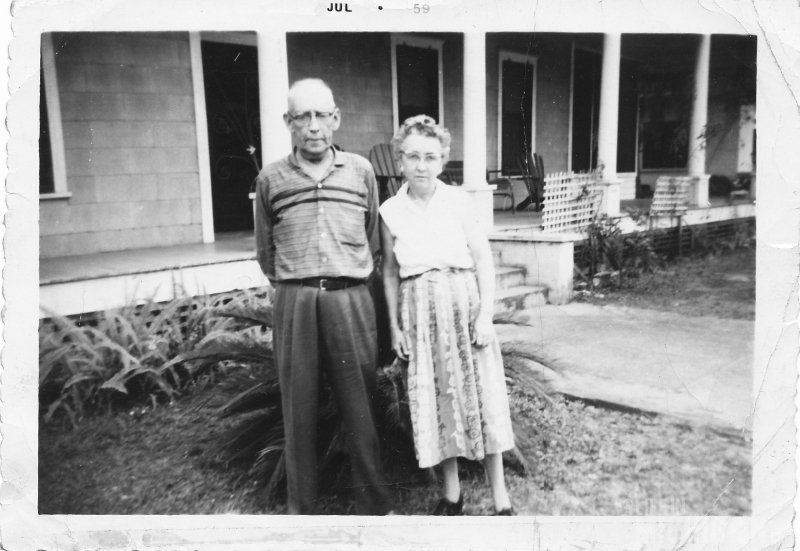 (Photo: Albert and Lula Brown)
No you are not leaning, but Lula is definitely leaning. During the winter, Lula and Albert stayed in Kissimmee, Florida. While they were in Florida Lulu and Albert liked to gamble at the dog track. Betty claimed they had a bookie to play their bets. She belonged to the Daughters of Isabella, a Catholic organization and she spent a lot of time with those women according to my Aunt Alice.

Lula’s story would not be complete without a mention of Little Mary, her sister. Little Mary was her complete opposite. I know this picture is a little blurry but I love it. Meet Little Mary. She was funny, warm and loved by everyone. Aunt Alice describes her as a butterfly – tiny and breakable.  She lived in a tiny, funky house by the railroad tracks in Ingomar, Ohio. It was like a doll house. 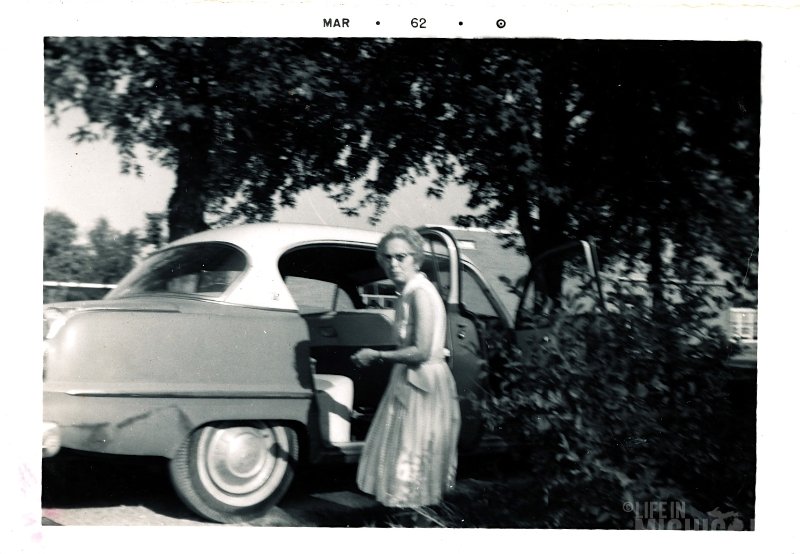 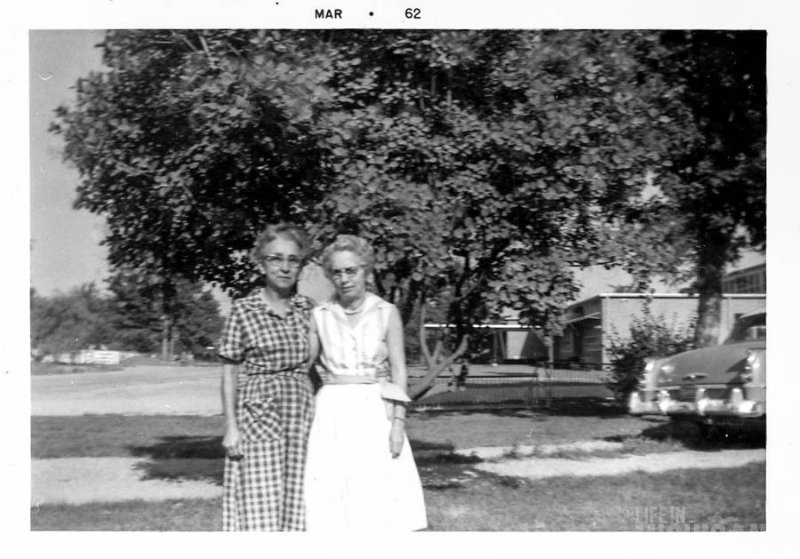 Lula wasn’t that much taller but I suspect it was her sweet personality that contributed to her being named Little Mary and the fact that her sister-in-law was called “Big Mary”. 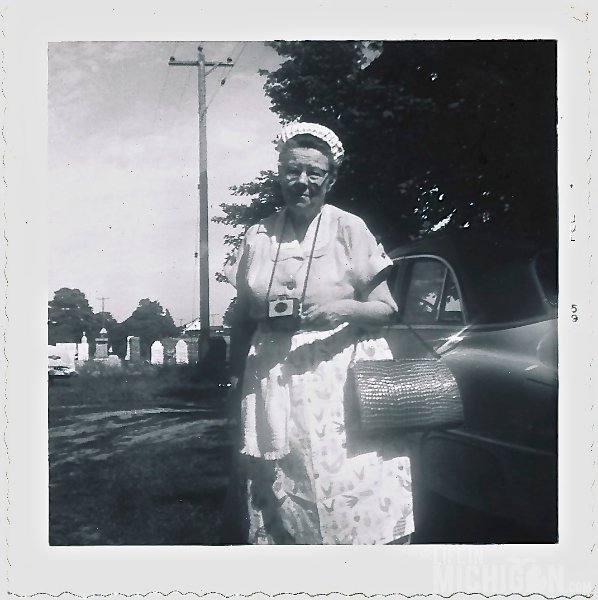 Big Mary was married to Joseph Roi King, Lula and Little Mary’s brother. Big Mary was full of laughs – fun to be around. She was very jolly and happy. Big Mary and Roi had one daughter, Rita King. They would come to Michigan to fish.

There are more photos in the gallery and if you enjoyed this post you may enjoy the other posts on our genealogy page. If you have more to add to this story, please leave a comment or send me an email message. I hope you’ll subscribe to our blog or follow us on Facebook.