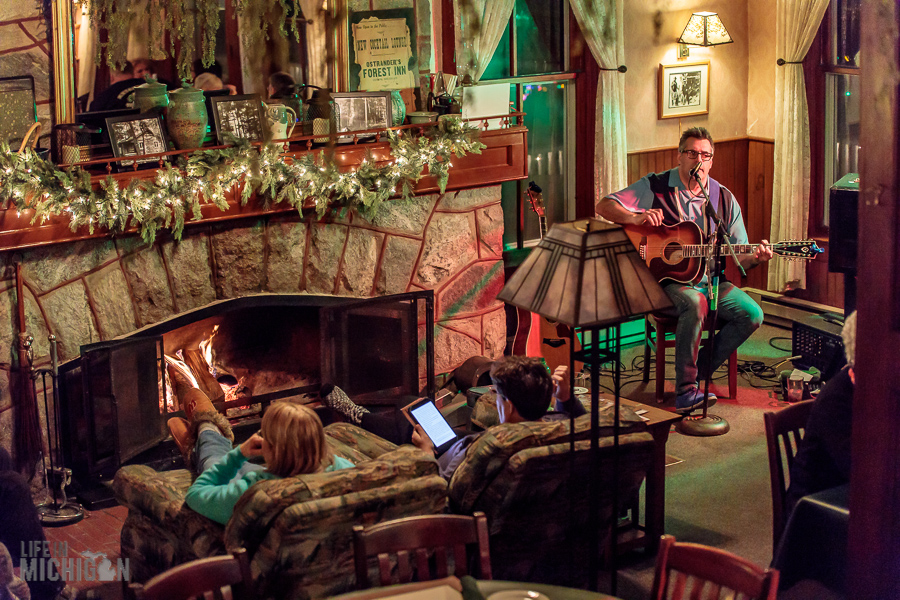 Delicious food, an impressive bar, live music, a huge fireplace and beautiful guest rooms are just a few of its charms. But Its allure is its location. Just far enough off the beaten trail; it feels remote. You feel transported to another time, but with WIFI and good craft beer. It casts a spell over you and you’ll race your friends to return. 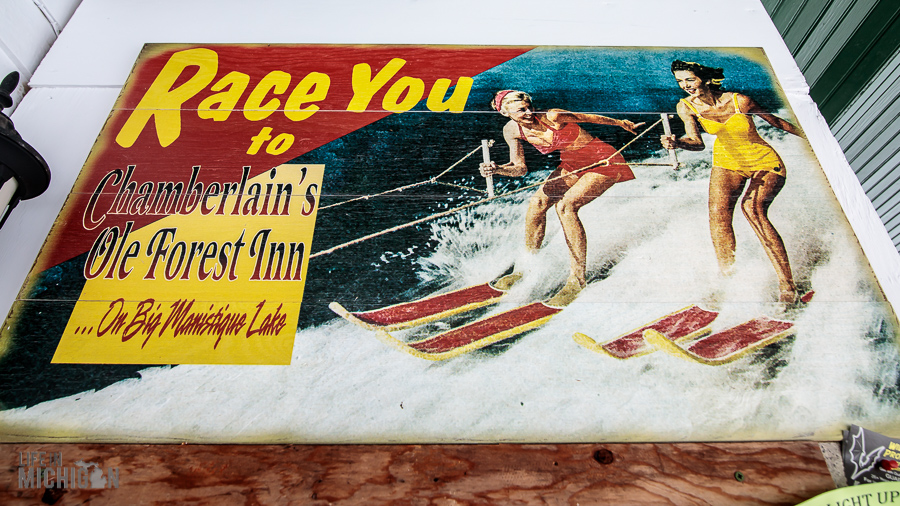 Sunday morning after the Traverse City Winter Microbrew and Music Festival, we met Robin and Bill for breakfast at Pearl’s New Orleans Restaurant in Elk Rapids. The world on the other side of the restaurant’s window looked like a snow globe someone had shaken none too delicately. Huge snowflakes swirled and danced. We didn’t care. It added to the ambiance while we munched on fried green tomatoes, hush puppies and crawfish cakes. We sipped delicious, strong coffee and guzzled water to tame the quiet hangover that was lurking on the edges.

The goal for our breakfast meeting was to find a place to stay in the U.P. for the second half of our mini Michigan winter vacation. You see we’d left Ann Arbor without a room reservation. At the time, it felt spontaneous and carefree. Now it felt concerning and like a problem. By the time the check arrived, Robin had solved the problem. She’d called Bud at Chamberlin’s Ole Forest Inn and got us their last room. A Winter adventure was brewing.

Now we just needed to get to Chamberlin’s. The directions were easy. Cross the Mackinaw Bridge, hang a left and drive for an hour. We’ve crossed the mighty Mac countless times. Several years ago we made the crossing with a flu epidemic raging in our vehicle (high fevers, puking, emergency pit stops). It was coupled with a high wind advisory and semi-trailers in the ditch. It has harrowing. During that crossing, I felt I’d earned my Michigander Bridge Crossing Badge and was “seasoned.”

I wasn’t concerned when we approached the bridge and the large, billboard like advisory sign flashed “HIGH WINDS!”  Bill pulled off at the last exit before the bridge. “To compose himself,” Robin said in a text message. That should have been a warning. As we whizzed past, we nonchalantly sent a reply text, “See you on the other side!”

The Deep Purple Ranger is approaching middle age, maybe even its “golden years.” The last payment was made at least 10 years ago, so not all of her parts are um, working. I’d forgotten about the broken latch on our trusty Ranger’s hard top. We’d just passed the bridge’s point of no return, when a gust of wind slipped under the hard top. It flung the lid open like a sail.

Panic ensued in the Ranger’s cab. Well, I was a hot mess. Chuck remained stoic and focused. There was a brief but a direct exchange between us. It went something like, “OMG Chuck! The lid is open!”  To which he replied, “I can’t stop. There is nothing I can do about it. I’ll be blown off the bridge if I get out.” I took one last look at the flapping lid and shut my mouth. Me chirping about the lid wasn’t going to help. We were not swept over the railing. I’m pretty sure it is because I promised God, my guardian angel and whoever else I could think of, “I will always take the Mighty Mac’s High Wind advisories seriously. Please don’t let us die.”  Yes, that is definitely what saved us. 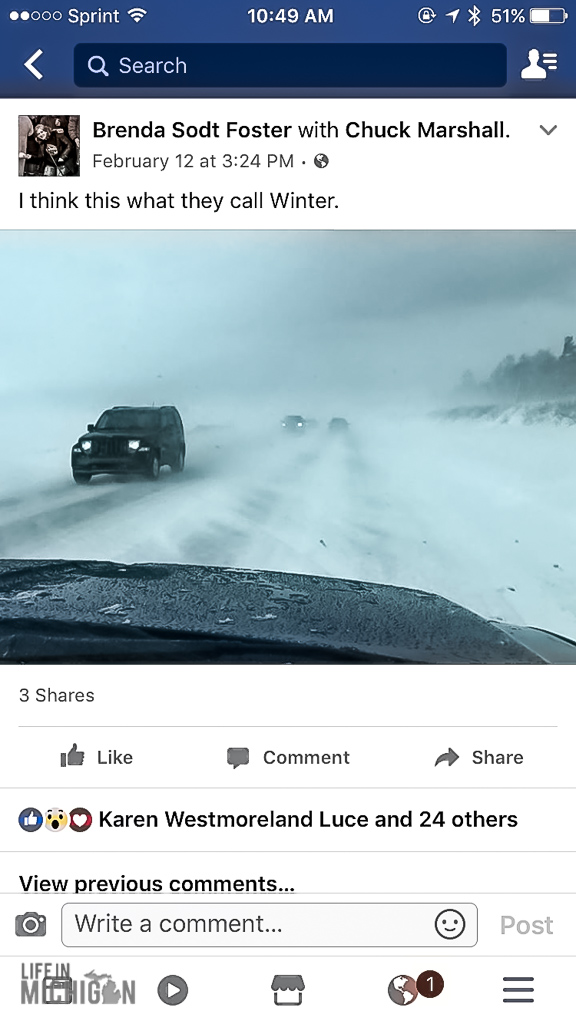 Bud welcomed us when we arrived at the Chamberlin’s Inn. He got us checked into our rooms and directed us to the bar. 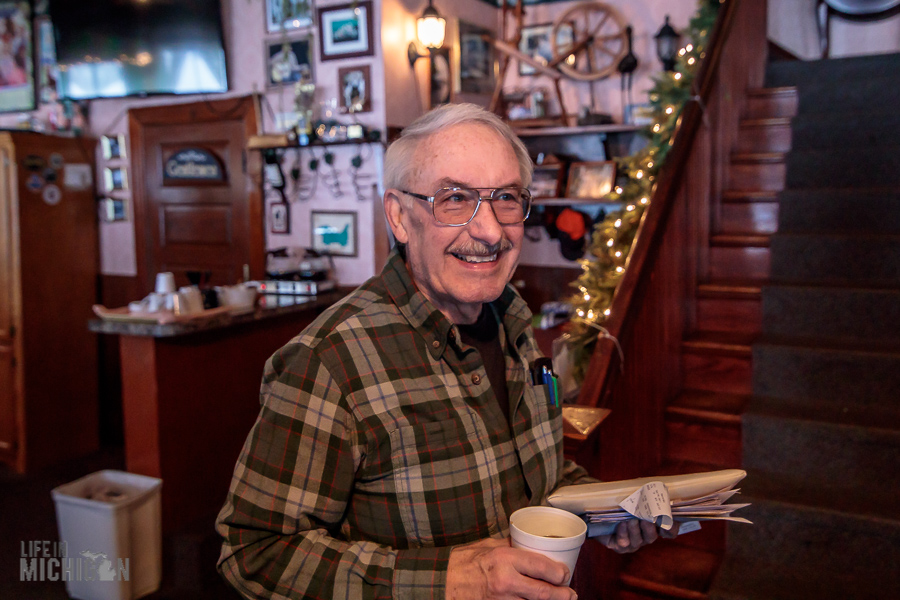 It didn’t long for a Euchre game to start. While I was busy playing my “trump card”, my Facebook friends were having a field day with my Winter Facebook posting. Take Rick Miller’s thoughtful picture he added to my Winter Post. To this we added our thoughtful reply. 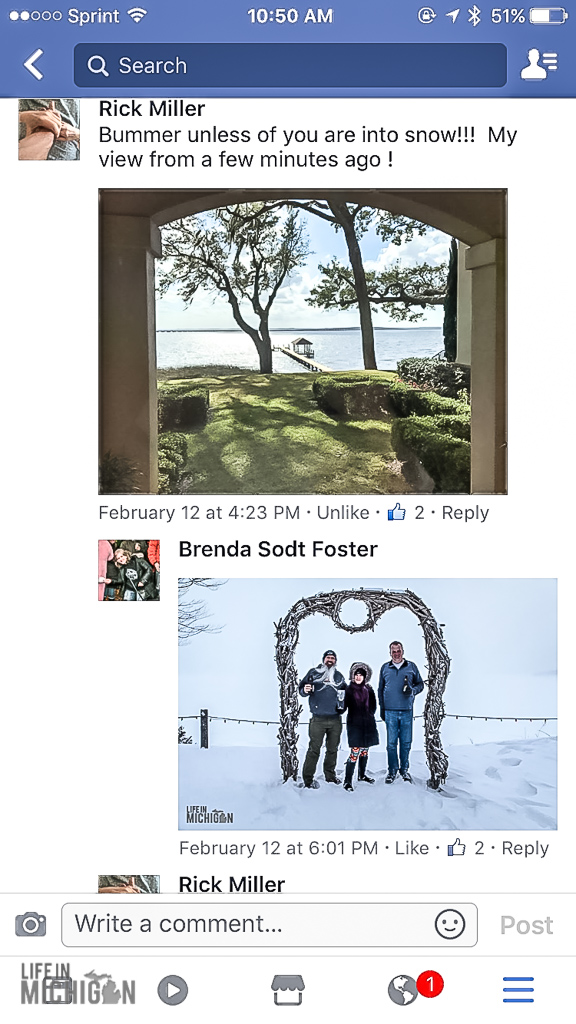 Rick’s comment was definitely a challenge! With a few adult beverages on board, we found a snowmobile driver still dressed in his winter gear. He was a willing accomplice and agreed to help us with a photo shoot. Ten minutes later, we were wishing our friends were with us. 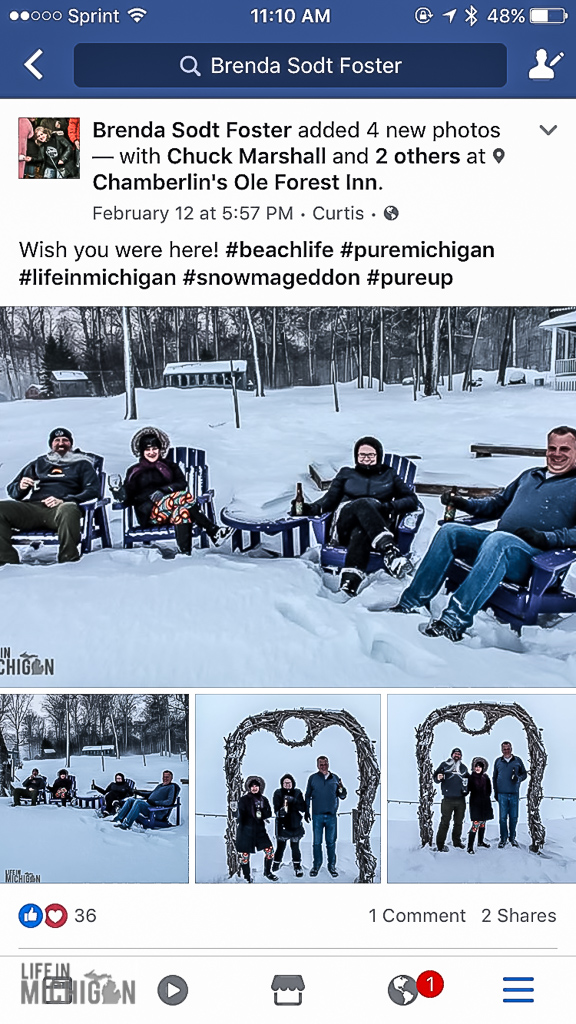 The Inn is an interesting cross between a resort and roadhouse. The movie “Dirty Dancing” pops into my head when I grasp for a description — a remote location on a lake, coupled with food, music and alcohol. (Sadly, no dirty dancing, but maybe I didn’t stay awake long enough.) We live in Michigan not the Catskill Mountains, so we played Euchre. We got tipsy while nestled in cozy recliners by the fire and listened to an acoustic music set. In the morning, Bud greeted us in the dinning room and directed us to the coffee and asked if we’d like breakfast. It was included in the room. Yes, please. 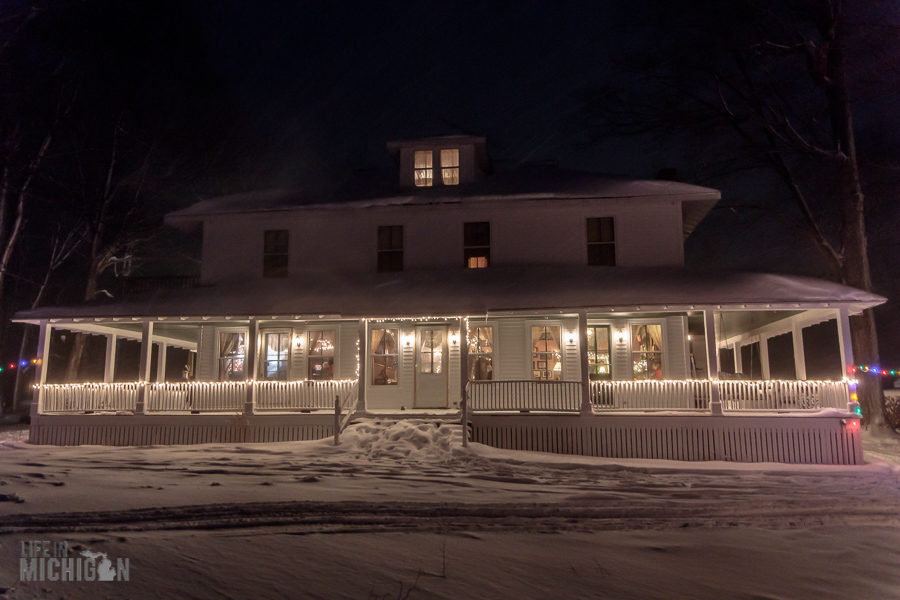 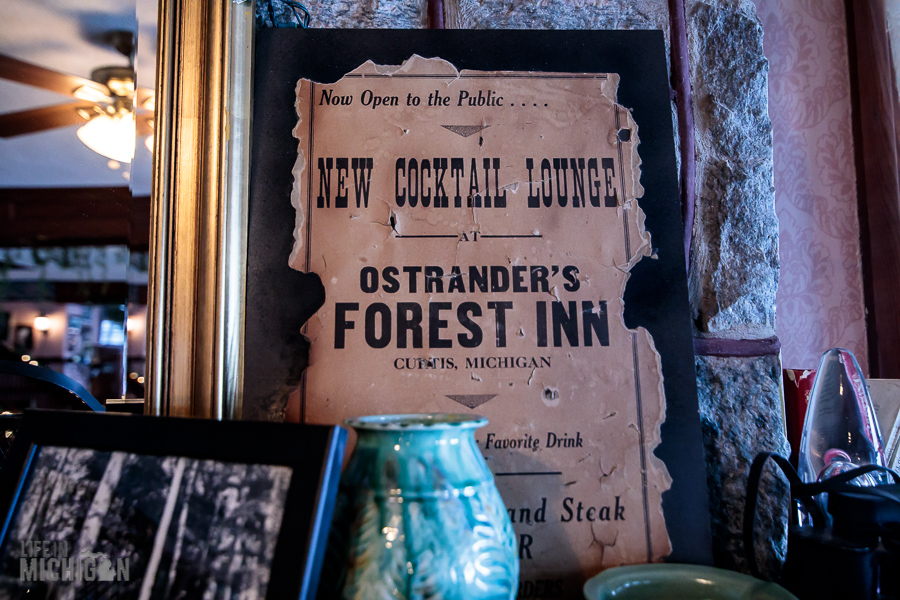 Chamberlin’s was built in the late 1800’s near the Curtis train station to serve as a passenger hotel. It was moved to its current location in 1924 where it continued as a hotel. During the 1970’s hotel operations stopped and It was empty for nearly 15 years. Bud stumbled across it in 1989 while he was snowmobiling and in 1990 opened it as a bed and breakfast. Several years later he opened the restaurant.

We’ve got more photos from our visit at Chamberlin’s Old Forest Inn our gallery. We’d love it if you’d share the pictures, but please give us photo credit.

If you enjoyed our story about Chamberlin’s Old Forest Inn, then share it on your favorite social media venue or send it as a link to your friends and family. This is good for everyone!