In July, my favorite game inventor, good friend, and running buddy, Michael Steer invited us to the ChiTAG Ann Arbor meet-up at one of our favorite restaurants, Rappourt Brew & Chew. Yes, it is true; GAME INVENTOR is a real job. 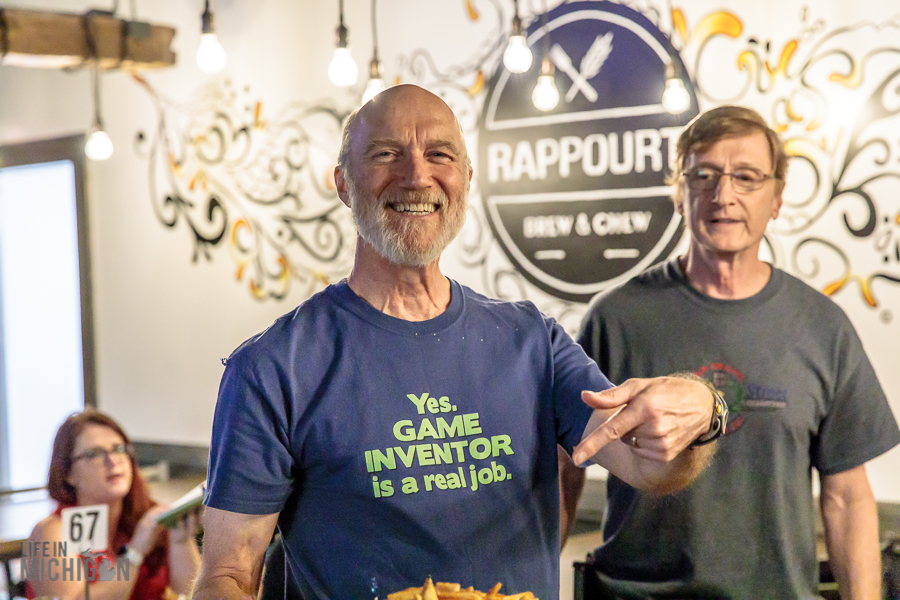 Michael is the Vice President of Random Games & Toys located in Ann Arbor, Michigan. He and his business partner, Garry Donner have been inventing games together for more than 40 years. They’ve sold millions of games, literally. Their 10 million sellers were “Pocket Trivia” by Hoyle and “Tumblin’ Monkeys” by Mattel.

I’ve spent hundreds of hours training for marathons with Michael. We’ve run more than 10 marathons together. (You’d think I’d know the exact number, but I’ve lost track.) We talked about a lot of weird stuff while pounding the pavement so you’d think I would know a lot about his life as a game inventor. Somehow I missed a few details.  Like the sheer number of games, he and Garry invented. There is a long list of games, toys, and puzzles they’ve invented on their website. I feel humbled. Wow. I made a cootie catcher not too long ago. How was I allowed to run with him?

These four beautiful people were having so much fun we had to snap a picture. 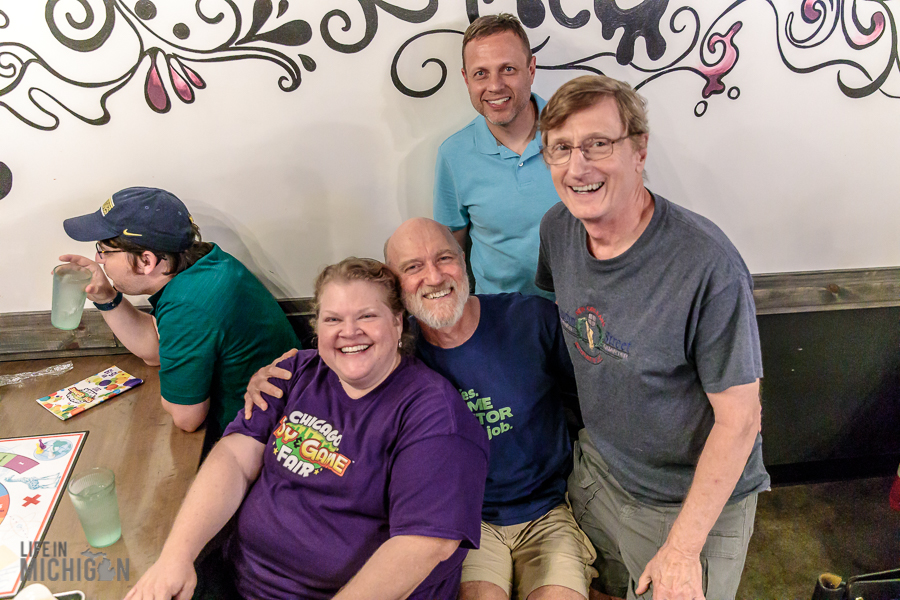 The back-row in the blue shirt is Brian Spence. He invented Buzz Word and Last Word, plus over 50 other games that got published. He is the guy you want to sit next to when they break out the party game. I am champion Euchre player but word games, not so much.
In the front with the purple shirt is Peggy Brown. She has invented thousands of things: games, toys, activities, housewares. She used to have a regular gig on the Rachael Ray TV show. She’s written books and done documentary films (one about the inventor of Operation). As Michael says, “She is stunningly creative.” I want to be with her all the time.
Michael is in the middle between Rachel and Garry his business partner at Random Games. Seriously, what a job. What a life!

Michael, reflecting on the last 30 years and 3000 games says quitting his day job was the best decision he could have made. “It is very satisfying to provide my livelihood through this business Garry and I have created, as well as helping many others succeed in this creative and fun world.” Best of all, Garry and Michael have developed a deep friendship over the years. Michael says, “Working with Garry has been a blessing.”

What is is ChiTAG? It is not a new ChiTea drink for starters, but the Chicago Toy and Game Week. The week-long toy and game fair is held in Chicago each November and is the largest toy and game fair open to the public in North America, with over 30,000 attendants. Along with the Toy and Game inventors, media, and executives from the toy and game industry, families come to play games. You don’t have to bring your kids to attend. Thousands of grown-ups who love to play games attend to check-out the hottest new toys and games.

“ChiTAG Week is “THE” event in the Toy Industry, it is a who’s who of Toy & Game Inventors and Toy & Game Companies. The Conferences, Gala and Fair are unmatched for Educating, Celebrating and Playing in our industry. It is timed perfectly for seeing the best of the best toys and games right in the heart of our biggest selling season!”  – Gary Swisher, former SVP of Inventor Relations and Head of Gaming, Mattel Inc.

“ChiTAG Week is a high point of the year to meet and speak with inventors from around the globe in an amazing, innovative and supportive environment. It is the only toy and game fair offering a combination of new and experienced inventors, learning and networking opportunities – an event that is literally and figuratively built around an open-to-the-public Toy Fair set on Chicago’s historic Navy Pier.  It is a great place to experience every part of the toy industry, from the inventors, colleagues, and business partners, to watching the children’s reactions to the toys and games on the show floor.”  – Rich Mazel, Head of Global Product Acquisitions, Hasbro, Inc. 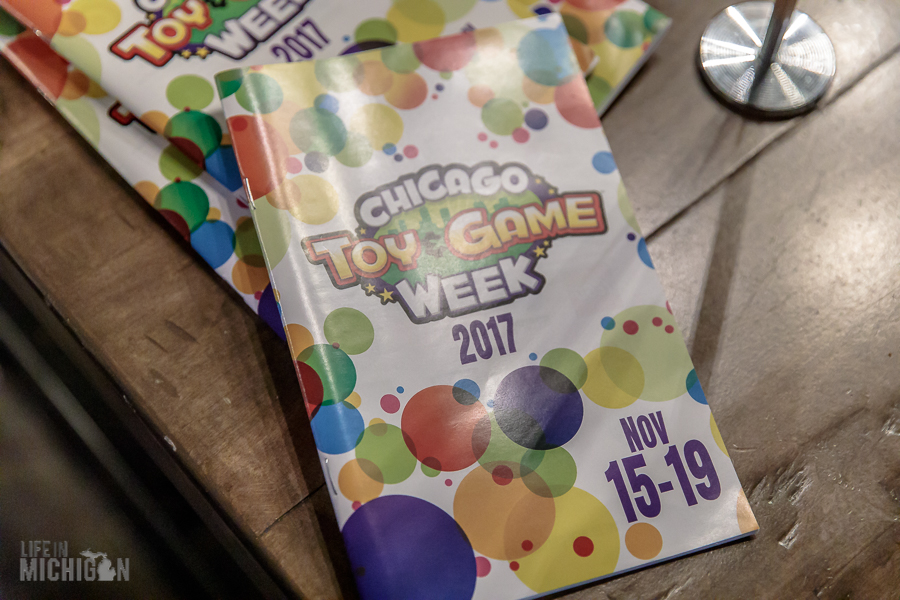 Mary Couzin, the Founder of Chicago Toy & Game Week organized the meet-up. The event was an opportunity for local inventors to connect and share their games. Mary has pretty impressive resume too.

After inventing, self-producing and licensing her own toys and games, Mary turned her passion for invention to help other inventors through DiscoverToysandGames.com, the world’s largest co-op of toy and board game inventors. In 2003, Mary launched the Chicago Toy & Game Fair (ChiTAG) with a plan to create the largest American celebration of play.

Pictured below are Mary Couzin, Michael Steer and Adam Bottiglia from YoYoTricks. 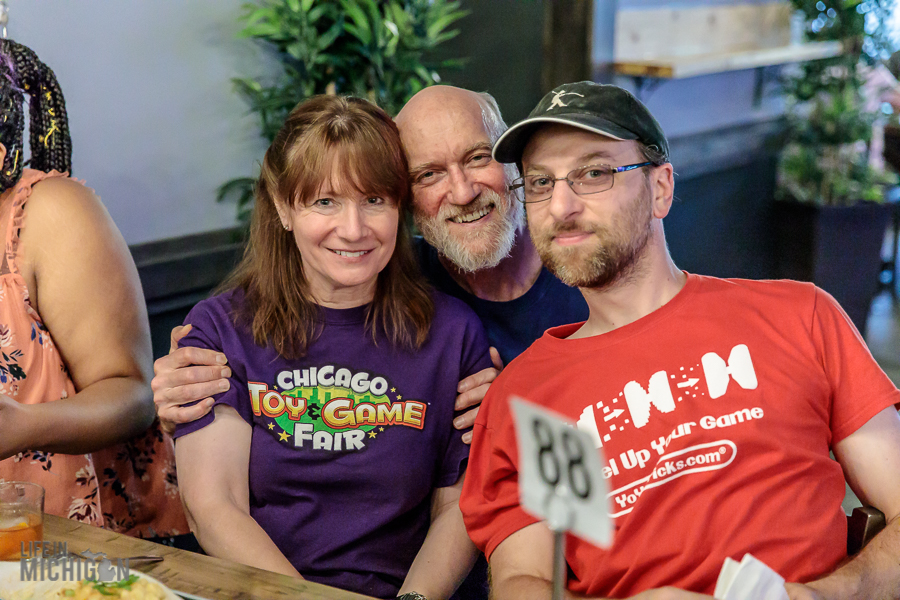 A yo-yo show happened. Yep, just like that. Yoyo tricks. Adam from YoYo Tricks shared a few smooth moves. He encourages you to try this at home. They’ve got a yo-yo channel on youtube with over 400 yo-yo trick and tutorials. 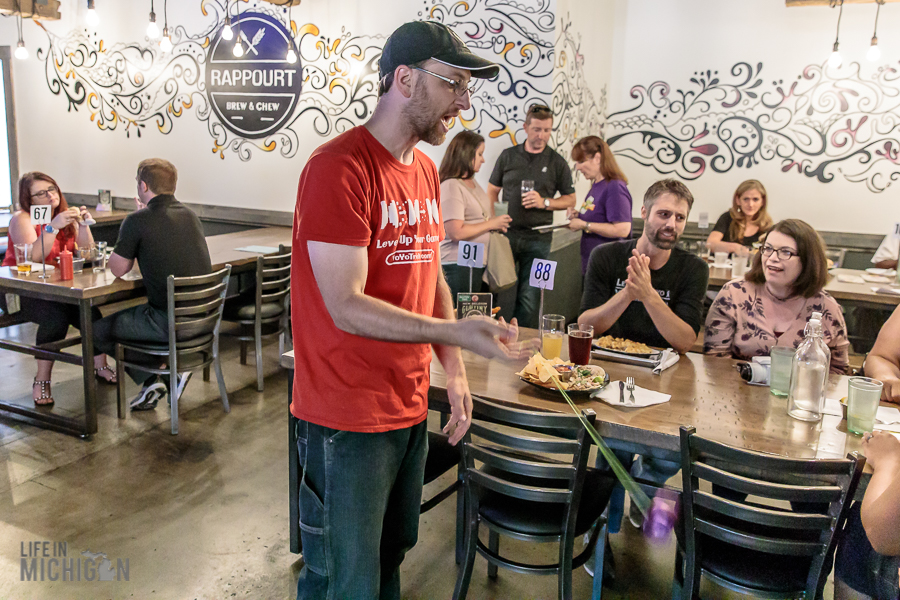 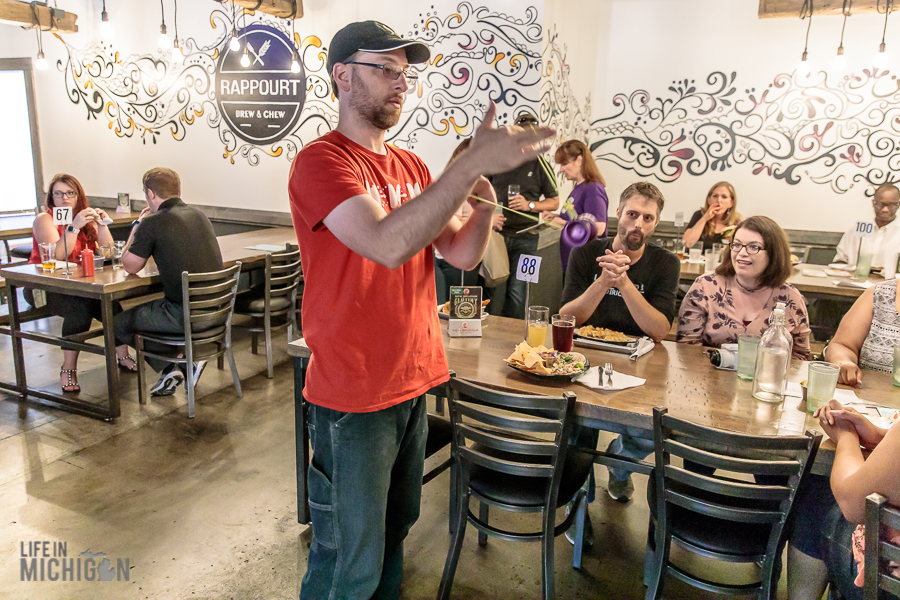 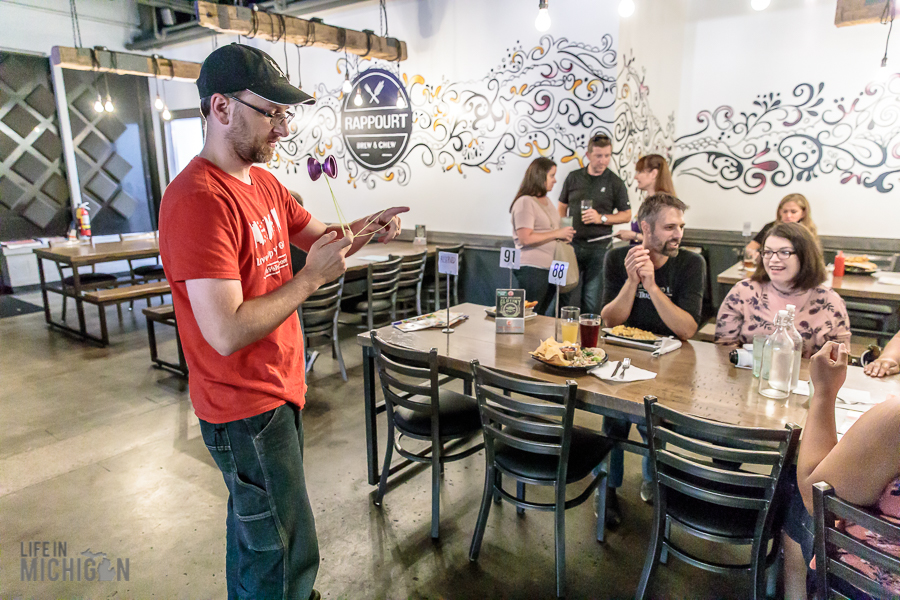 If you’d like to schedule your own show, head over to their website. I am suggesting to our department’s event team to schedule them for our next department picnic. It would definitely put a different spin on the event.

Members of our team have performed over 500 yoyo shows around the world mixing amazing yoyo tricks, skits, and comedy. We use yoyos, stories, and audience participation to create an immersive learning experience.

Becky Fixel from Week99er.com out of Detroit, Michigan, Rachel Hull from Roasted Beanz out of Canton Michigan, and Lisa from Nighthelper.com were at the meet-up. I found this to be a curious thing. I figured we were there because of our connection to Michael. Why would other bloggers be at the event? After I immersed myself in the ChiTAG world it became to clear to me why they were there too. You’d think I would know more about influencer marketing but sadly I’m a newbie to this world. There is a whole page on the Chicago Toy & Game Week dedicated to bloggers or “Play Influencers“. 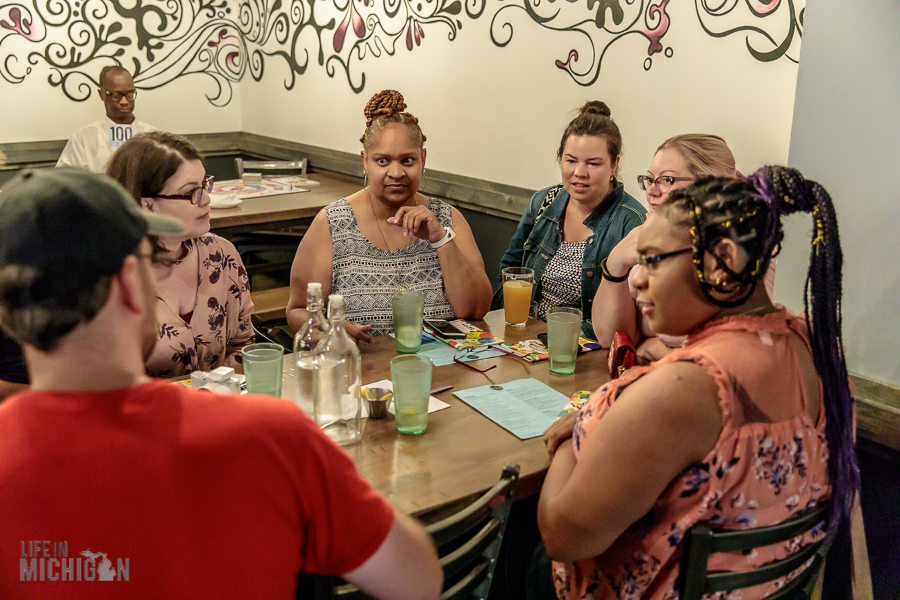 Game and Book of Common Knowledge

We sat next to Larry Williams, a game inventor and educator for much the evening. In 2000, People Magazine included a feature highlighting his contributions as the academic director at the Continentals Of Omega Boys and Girls Club in Vallejo, California. In 2001, he received the first-ever McDonalds Educator For Youth Award. His career as an educator was on fire. Unfortunately, Larry suffered a stroke. His career as an educator was only temporarily stalled. To assist with his recovery, he wrote the “Book of Common Knowledge”. The game was a natural companion. You can purchase the book through Green Academy in Detroit, Michigan. 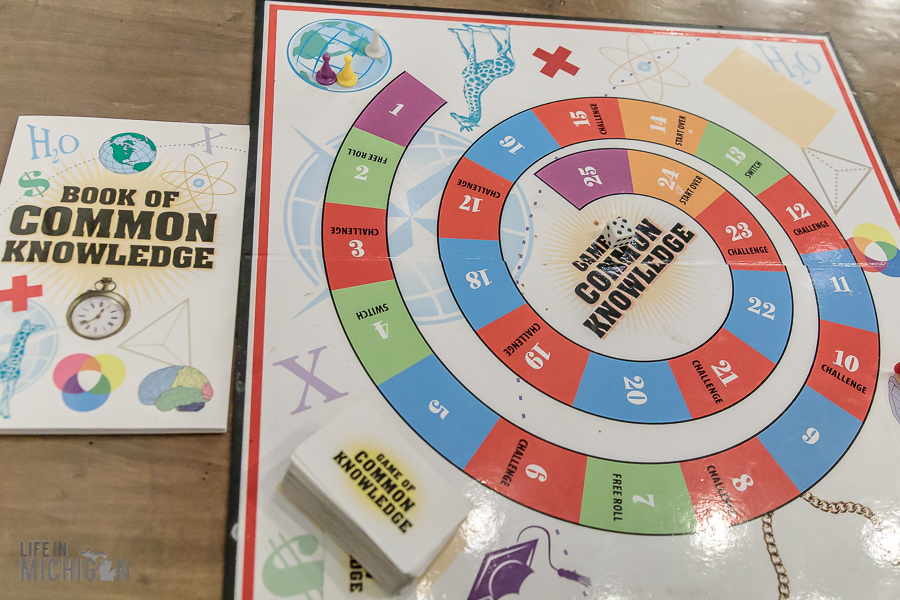 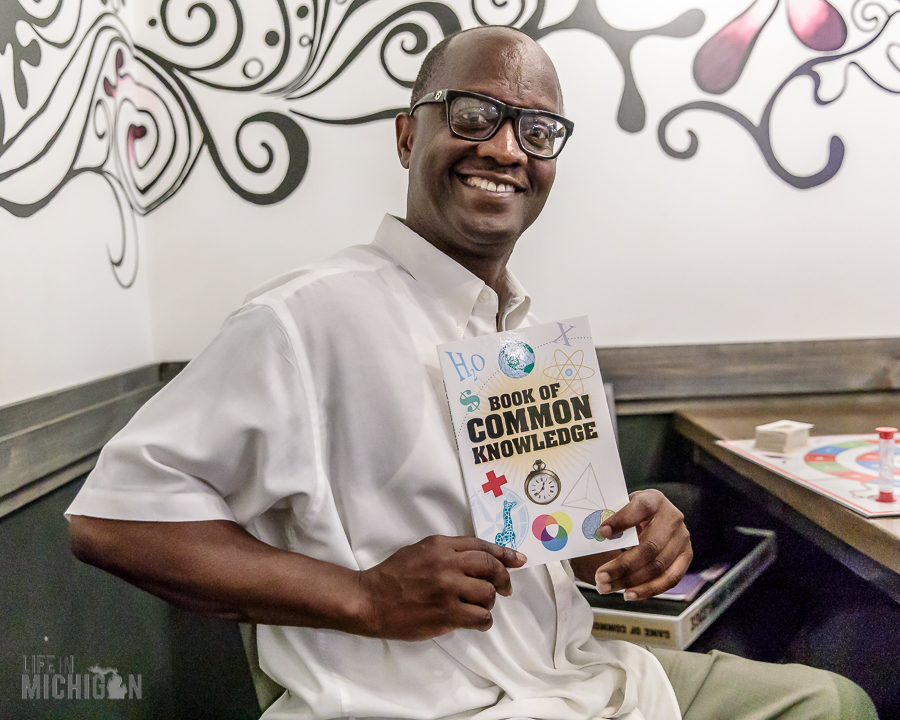 If you are invited to a meet-up of game inventors, do not hesitate. Say, “Yes, please!” Or go to the Chicago Toy and Game week in November.

We hope you enjoyed our ChiTAG post!  If you enjoyed the story, then share it on your favorite social media venue or send it as a link to your friends and family. This is good for everyone! Don’t forget to check out our photo gallery and share your pic! We’ve got loads of pictures.