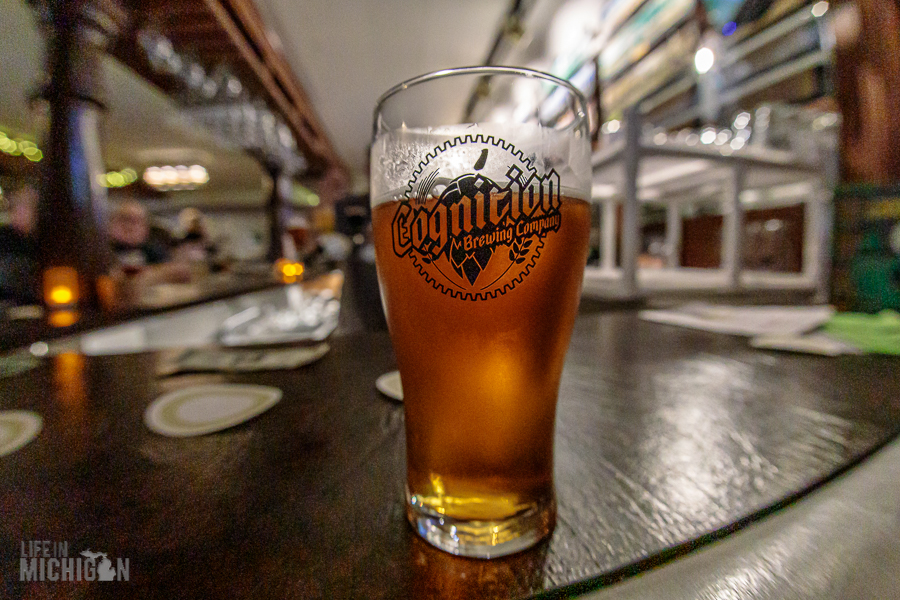 Our first experience with Cognition Brewing began at the 2015 U.P. Fall Beer Fest. I don’t quite remember the circumstances, but it wasn’t long before we met Jay Clancy and brewers Brian Richards and Kris Thompson. Our friendship blossomed at the extreme music festival called Berserker in 2018 which featured metal themed beers from Cognition and other Michigan breweries. Brian has since moved to Traverse City working with North Peak and Kilkenny’s Irish pub. Thankfully, Kris Thompson remains to create more sensational beers at Cognition. 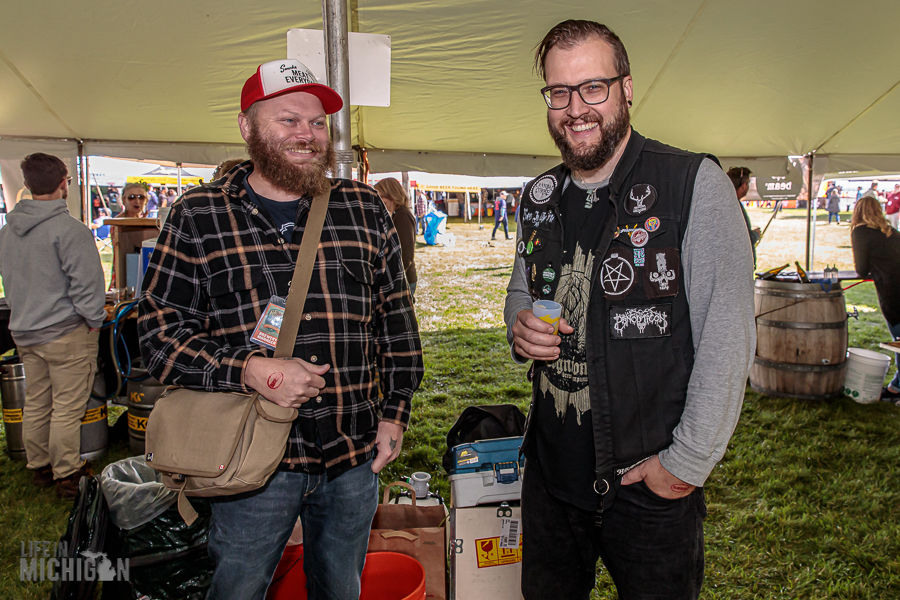 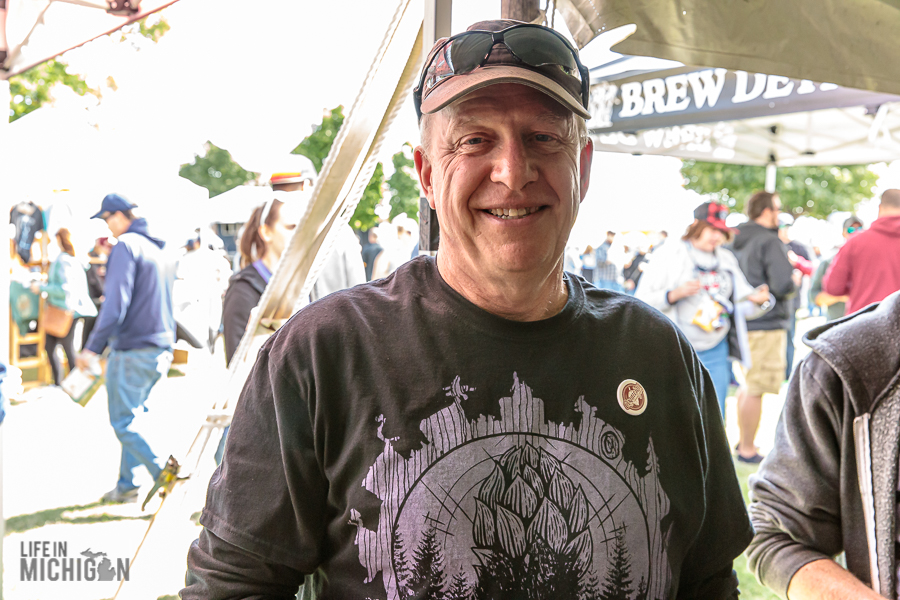 Being a metalhead and loving beer, I had to make a pilgrimage to visit Cognition Brewery. Given we were heading up for another U.P. Fall Beer Festival, I thought a stop was in order. Thankfully, Brenda, Jeff, and Angie love me and beer, so there is no problem getting them on board. 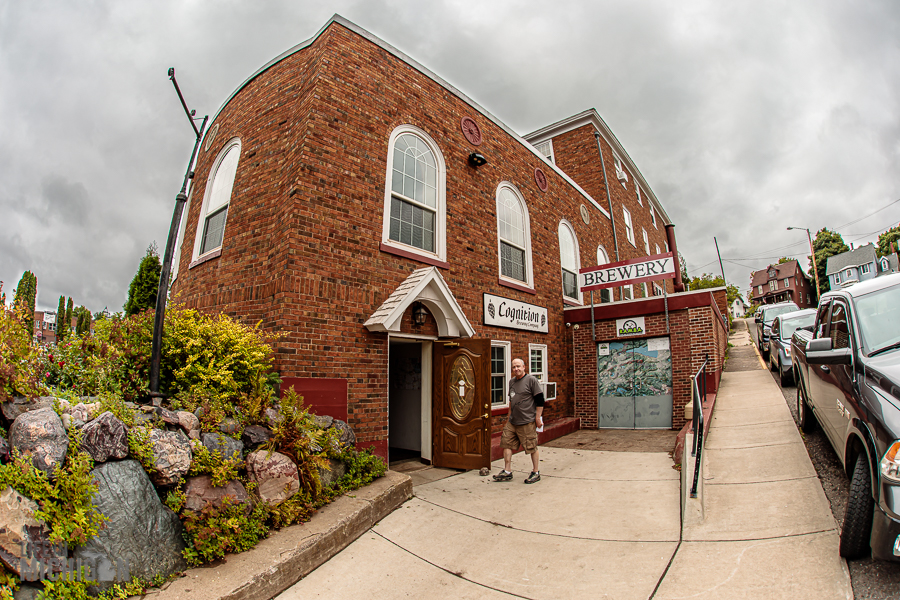 You will find Cognition located at 113 E. Canda Street in Ishpeming (just 15 minutes or so west of Marquette). The taproom features a very odd-shaped door that draws you into what once was the taproom for the Mather Inn. 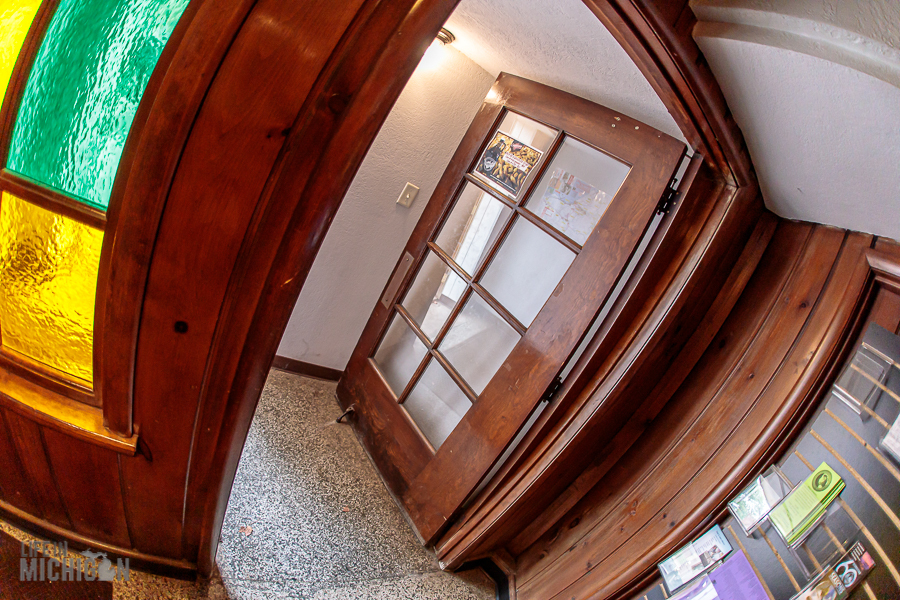 The Mather Inn was built in 1932 as a hotel. It has since been renovated into apartments. The hotel was once home to the cast of 1959 film ‘Anatomy of A Murder’. The film and book are set in the Upper Peninsula. The film was shot at locations in Big Bay, Marquette, Ishpeming, and Michigamme. 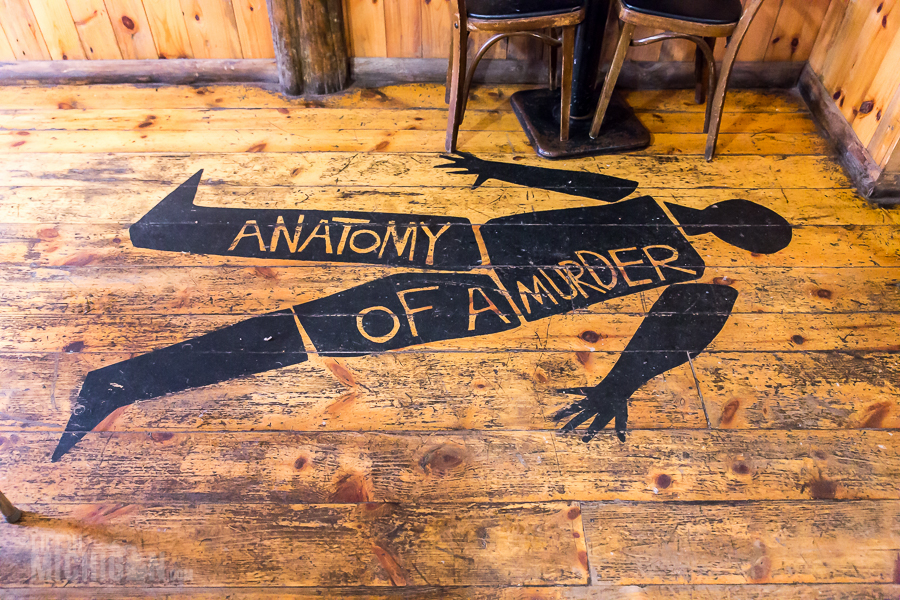 Entering the taproom, I could imagine Jimmy Stewart, Lee Remick, and George C. Scott sitting at the big wooden bar. The movie in my mind shows Jimmy calling to the barkeeper “Hey Larry, how about another Manhattan!”. Nowadays instead of a can of Blatz or a bourbon, the taproom is offering up the delicious creations of the Cognition brewers. 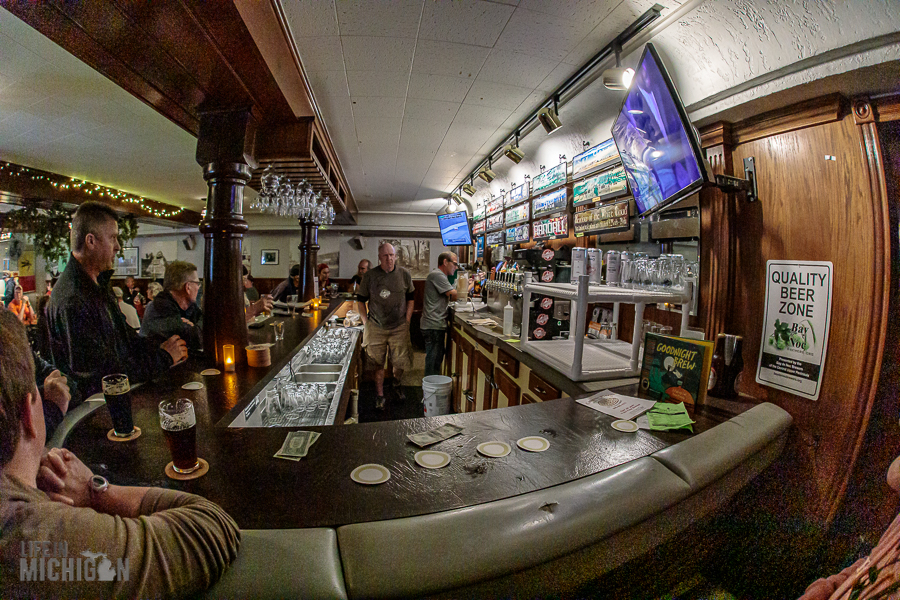 Now if you aren’t into heavy metal music, don’t worry. It isn’t like the place is cranking out death metal and full of scary metal dudes. However, some of the beers are named with a heavy metal theme. For example, the delicious “Death Is The Communion” triple IPA is part of Cognition’s High On Fire themed beers. The beer names are approved by High On Fire guitarist Matt Pike. How cool is that? 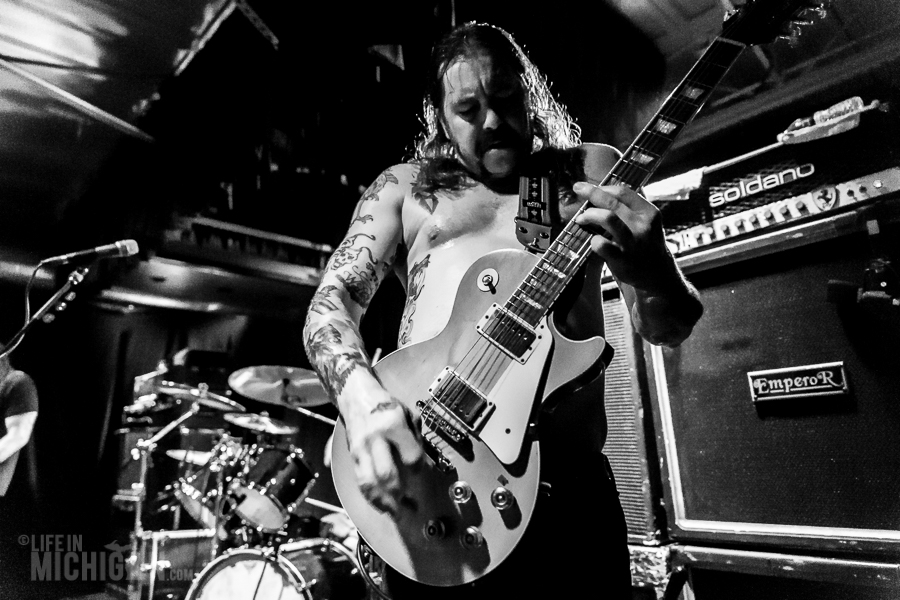 Another metal inspired beer is “Kindred Spirits”. A beautifully rich and robust coffee porter that awakens the senses with lush roasted malt. I dare say a taste of heaven in a glass. This phenomenal beer is inspired by the band Arctic Sleep. The guys from Cognition worked with the band to bring this creation to life. I can’t tell you how satisfying it is to hear music I love transformed into a beverage that brings me such immense joy. 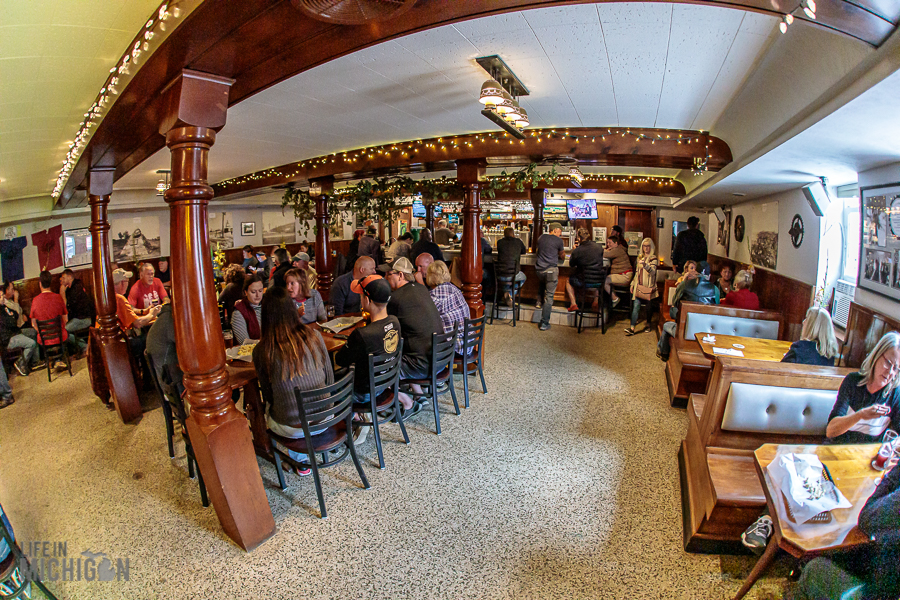 The feel of the taproom is warm and welcoming. It could be the U.P. hospitality or it could be that when looking over at the tables near the bar, we see our friends Deidre and Jim. I’m going to say it is both. The taproom is full of people enjoying one of nine delicious creations on draft. No doubt, there is a feeling of being home. 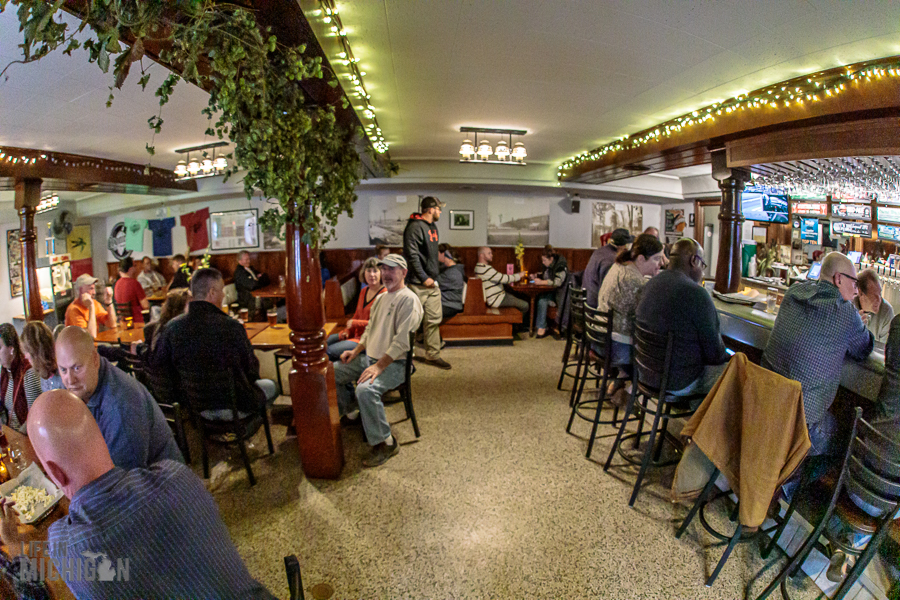 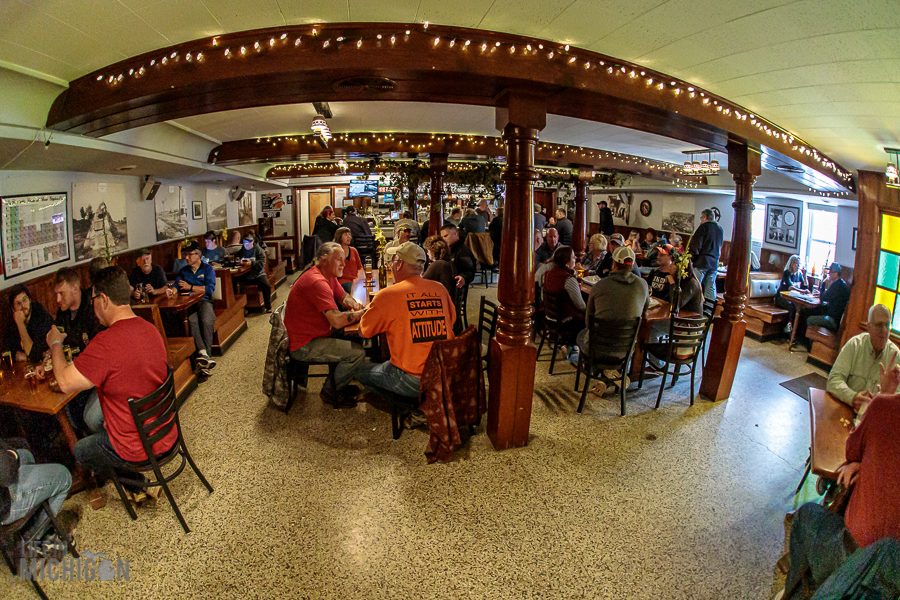 While sitting at a table with friends enjoying a fantastic Meadow of the White Cloud pilsner, Jay stops by to ask if we want to tour the brewhouse. Of course! After gathering up the troops, we follow Jay into the magical cellar where magic is performed. 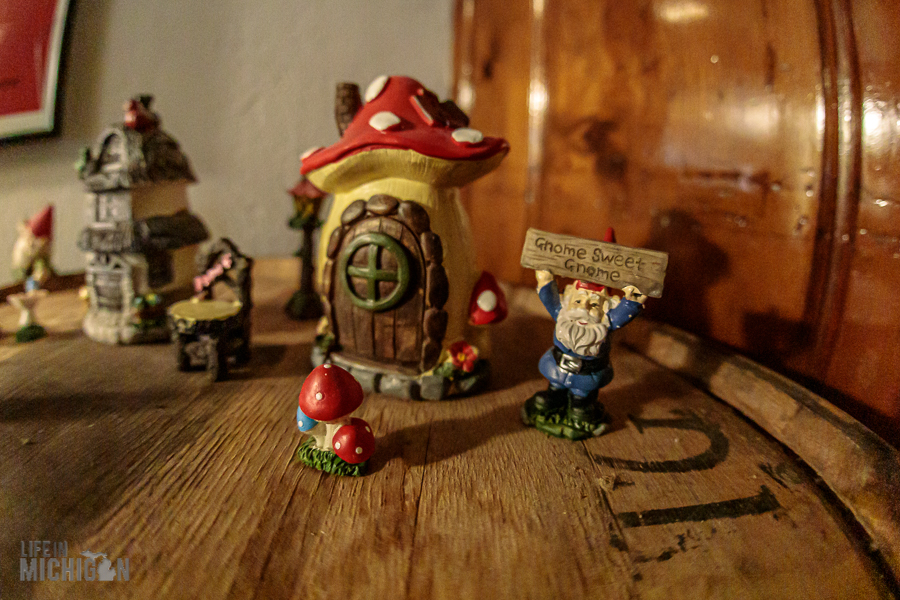 Jay relays the story of having to add nearly 18 inches to the floor of what had been the laundry and boiler room of the former Mather Inn. This space is now the Cognition office, fermentation, and storage/serving facility. Cognition uses a Michigan made brewery system from Craftwerk which includes brite tanks (serving tanks) and fermenters. 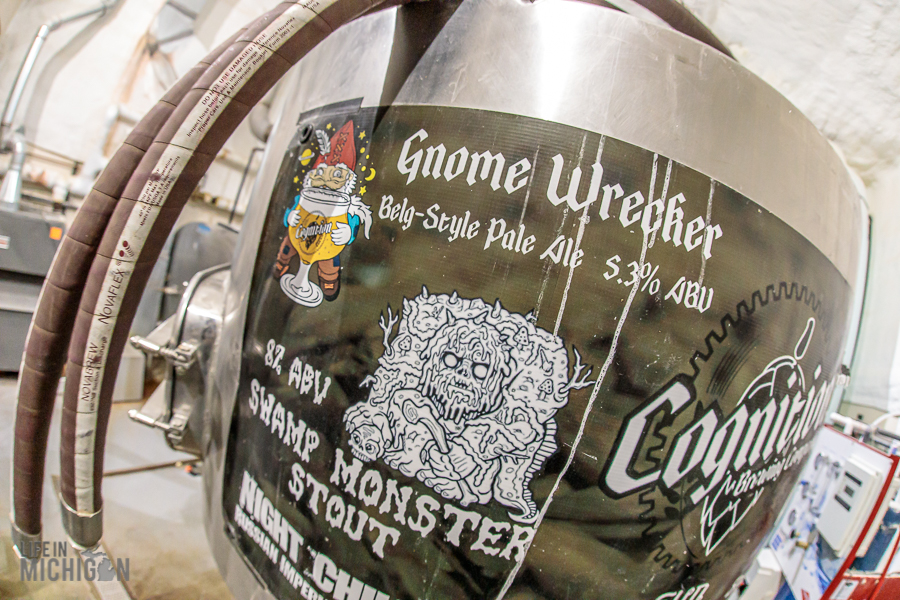 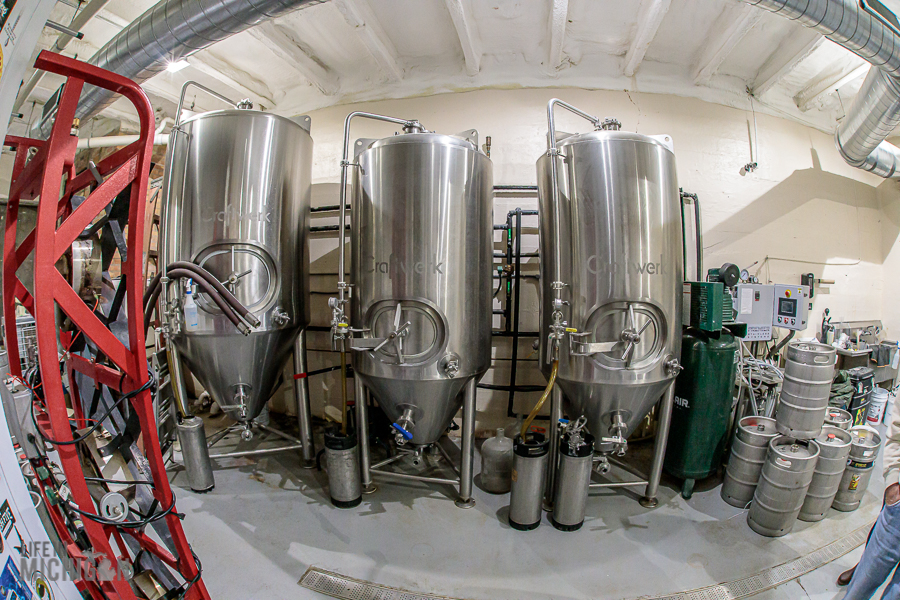 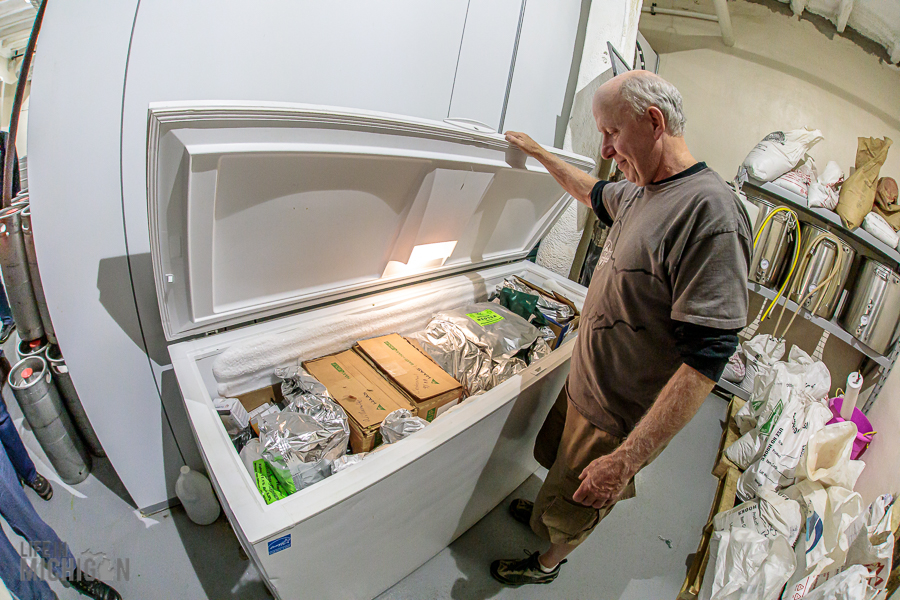 Standing next to the open walk-in cooler, Angie asks “So why is this called the blue house?” Jay tilts his head in puzzlement as the rest of look on in wonder. Jay says “Blue house???” Angie replies “Yeah, you had asked upstairs if we wanted to tour the blue house and I was wondering what the blue house was”. Jay’s eyes flicker  “Oh…I said brewhouse…not blue house”. We all laugh out loud knowing that we would forever think of this as the blue house. 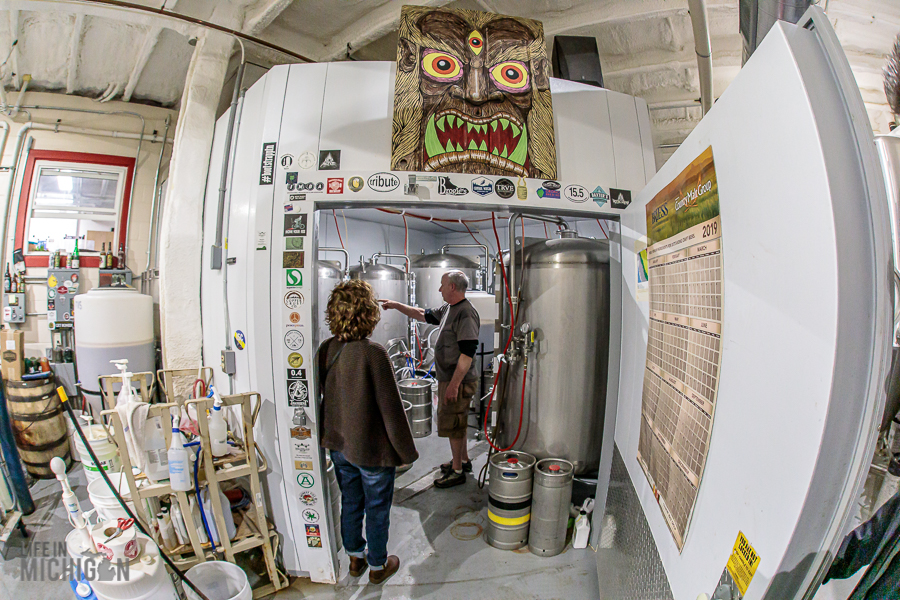 When we return to our table after the blue house tour, we chat with the fine folks who are sharing our table. One of them is Ishpeming resident Danny Garceau. We learn that he along with Kris Thompson led an event earlier in the day called “Foraging Follies”. The idea is to find some interesting local plants and berries to run through Randall The Enamel Animal. This infusion of the local habitat would then blend with Gnome Wrecker Belgian pale to create a unique variant for the upcoming U.P. Fall Beer Fest. The foraging ingredients include chokecherry, pin cherry, blackberry, wild apples, and sweet mugwort. 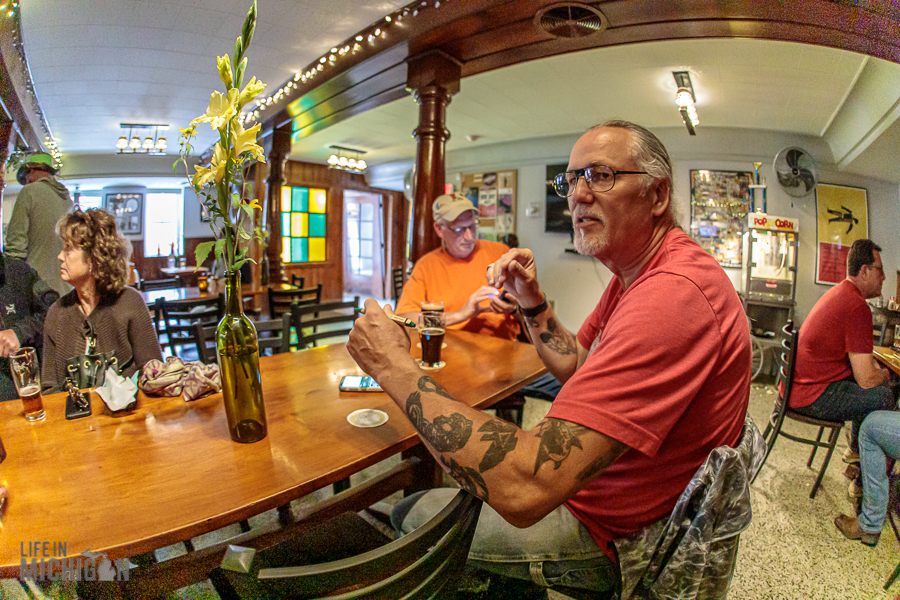 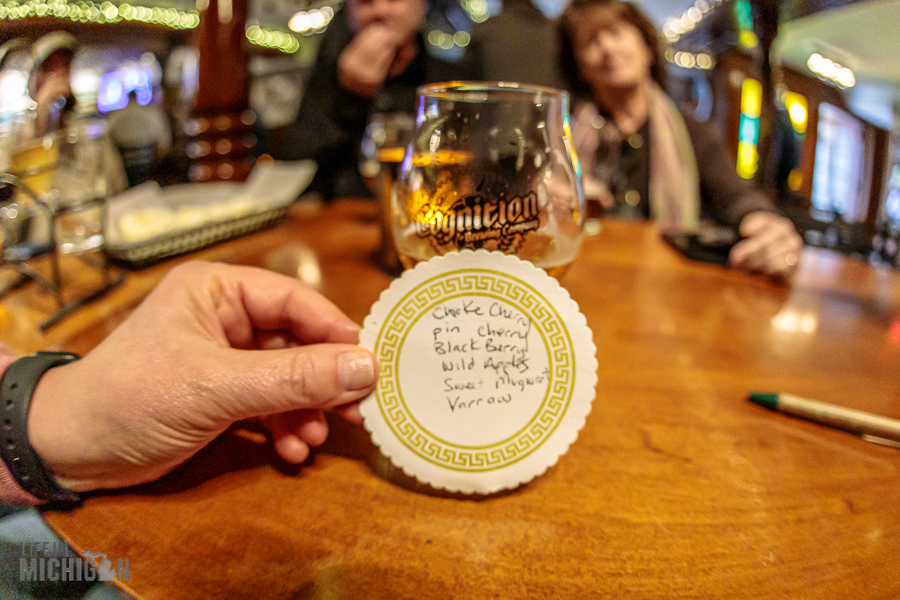 You may be wondering what the hell is “Randall the Enamel Animal”. It is a device created by Dogfish Head brewery. You can add some pizzazz to a beer by running it through flavor enhancing ingredients which are not originally included in the brewing process. Randall Monday at Cognition features one of their beers run through the Randall with unique ingredients. This runs the gamut from coffee beans to gummy worms. You name it, it could happen on Randall Monday. 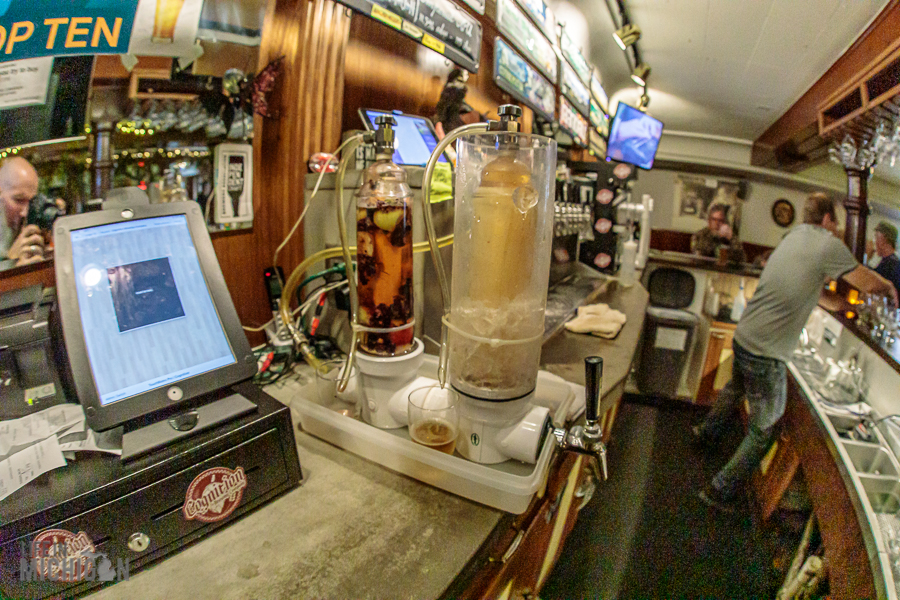 I would be remiss if I didn’t tell you about Cognition’s “Black Mass” porter brewed Chaga and spruce tips. This beer is Michigan. Specifically, it is the Upper Peninsula. It is robust, earthy, vibrant, exquisite, and devastatingly beautiful. Drinking this beer is to connect your senses to the bountiful land of Michigan which we call home. The Chaga mushroom is a medicinal fungus that grows on birch trees. It has a roasted coffee taste which adds to the earthy feel of this potent porter. 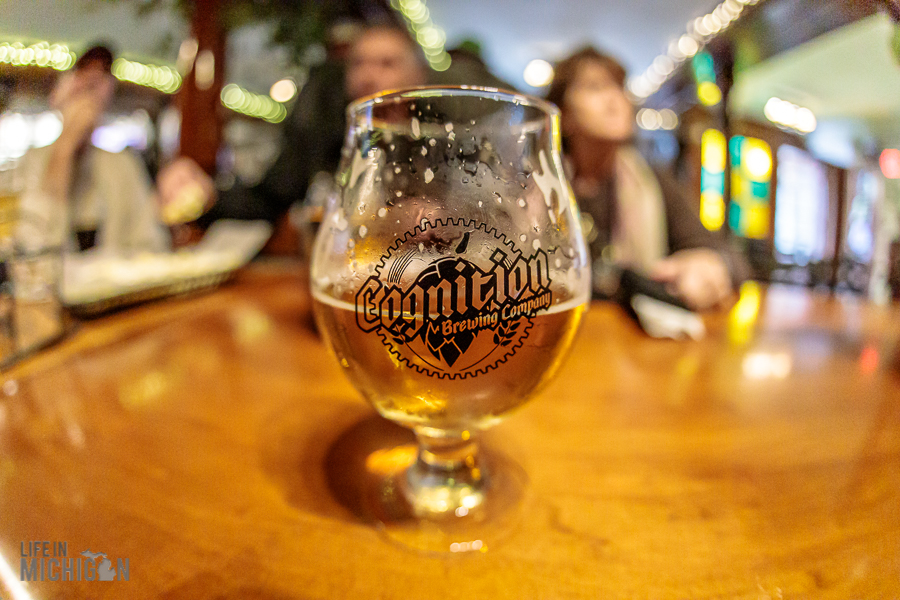 This beer is another example of how Cognition embraces its environment to create unique and inviting beverages. Jim Harrison wrote “Some people hear their own inner voices with great clearness. And they live by what they hear. Such people become crazy… or they become legend.” I feel that the people behind Cognition Brewing in Ishpeming are legend.

Visit our photo gallery where we have more pictures. Enjoy the images. Contact us regarding any use.