Dances with Dirt 2013 was perfect.

I’ve already marked my calendar for Running Fit’s 2014 Dances with Dirt in Hell, Michigan. Yes I had to take 800 milligrams of Advil when I opened my eyes this morning. My swollen ankle is elevated and on ice. Benadryl cream was applied to the curious rash on my leg. My favorite running shoes were thrown in the trash after it was apparent the muck was not coming off. And it is questionable if the smell in the Jeep of  beer and scotch will ever dissipate. What an amazing experience! I loved every minute, even the “Where’s the Bridge” leg that was suppose to be an easy 1.8 mile run. I was lulled into taking this leg by its length. I should have read the description first, “You’ve been wondering where the bridge is? We finally found it! Too bad for you, you don’t get it until after the swamp run/walk/crawl. Tie your shoes real tight, this stuff pulls back real hard. Team work is necessary, help each other out. Other than that, it is quite a nice run.” WTF?

Why? Is the first question I’m asked?

It is not an easy question to answer. You’ll probably never really understand my love for this race unless you love competing in extreme races with your best friends. There are many reasons why I love the Dances with Dirt 100K Extreme Relay Race:

The medal was fucking awesome this year. It is not the most important reason but wearing the medal to work on Monday morning is certainly one of the reasons why I love this race. It is also a bottle opener. Who wouldn’t love that? 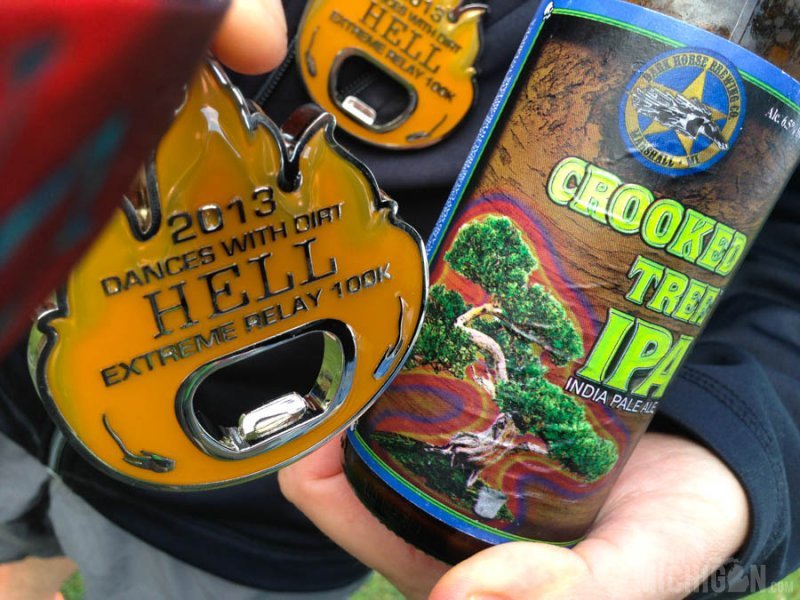 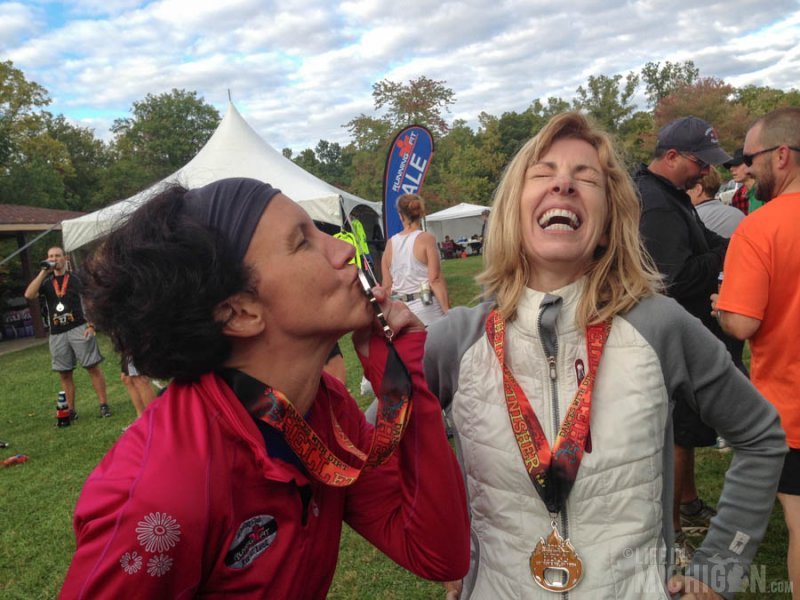 “Whoa, wait a minute, what is that on the medal?” Jeff said. Chuck thought Jeff’s theory about the medal design was very funny. (It could have been the Scotch and beer but it was pretty funny.) 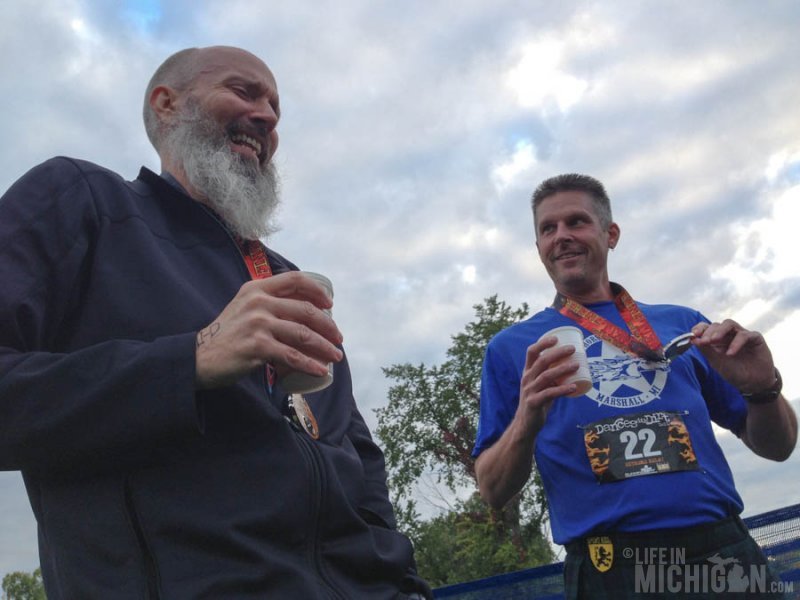 Jeff asks, “Do you think the flames look like sperm?” 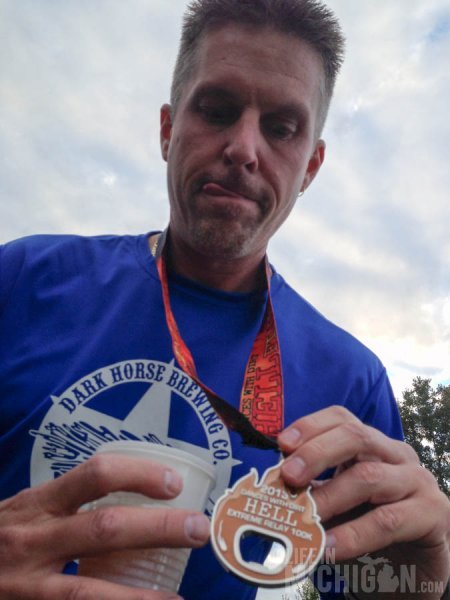 Jeff shares his theory with Lynda. 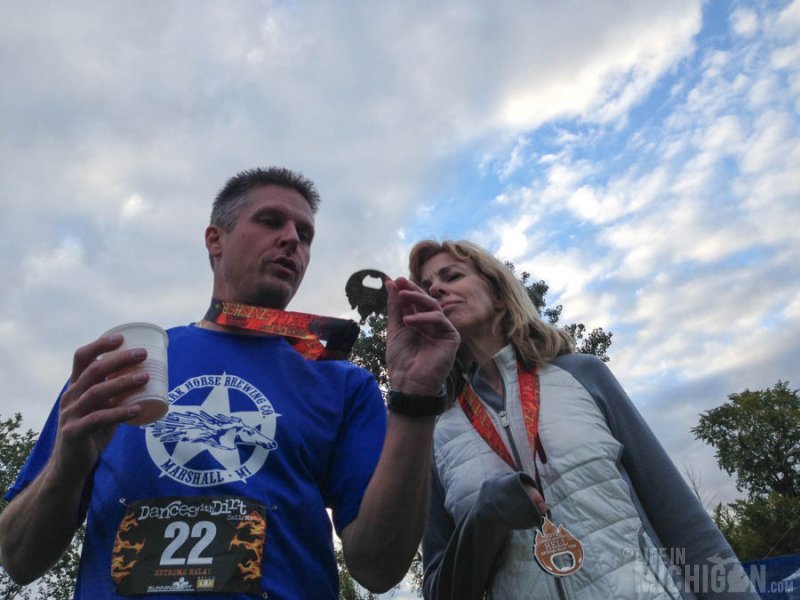 Lynda and Anne both agreed, “Oh Lord, it does look like sperm!” 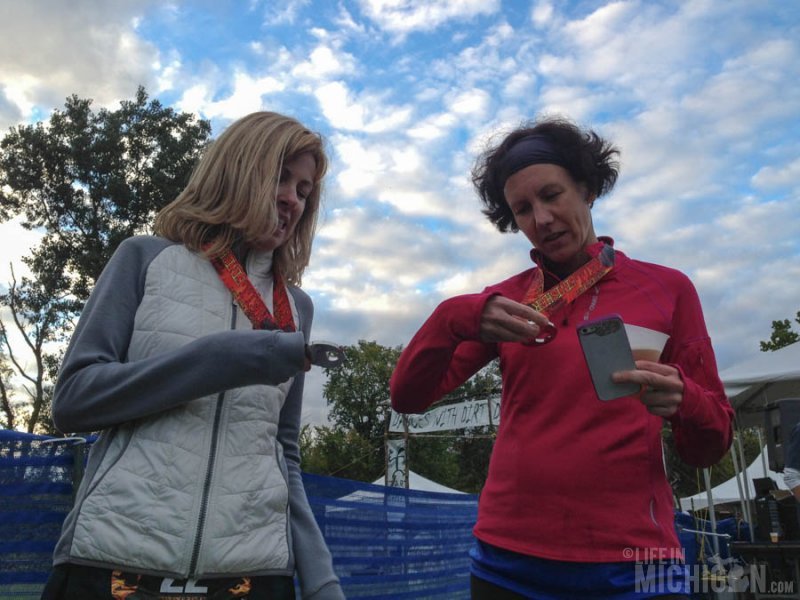 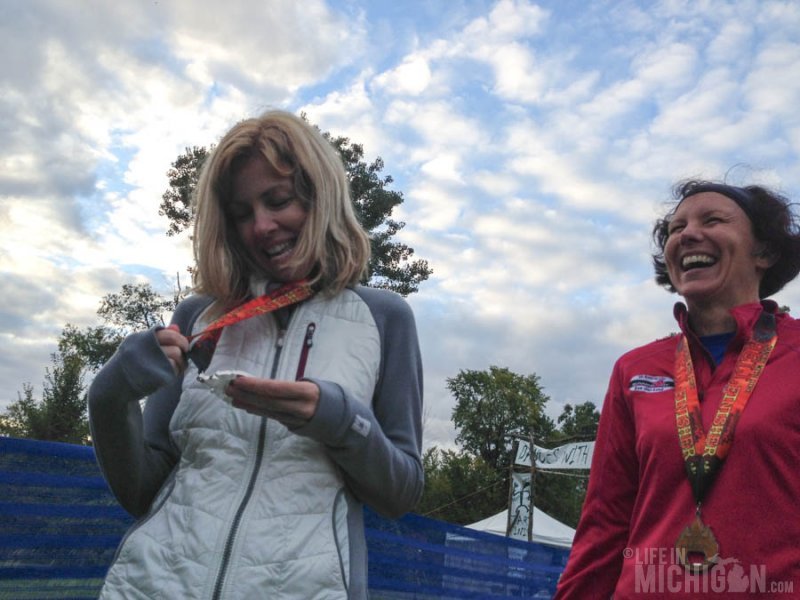 Each year the costumes and the team theatrics get better! The energy, enthusiasm, creative costumes and spirit of the day are probably the number two reason why I love this race. 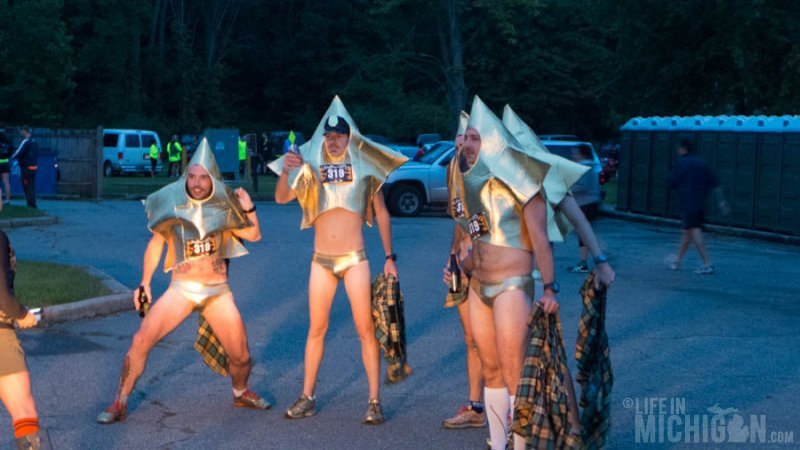 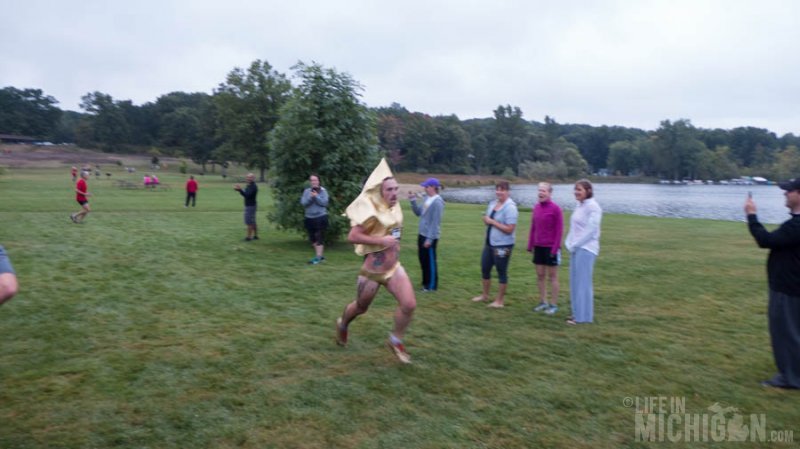 Oh my. Heisenburg likes the dirt too! And yes it was hard to look away. 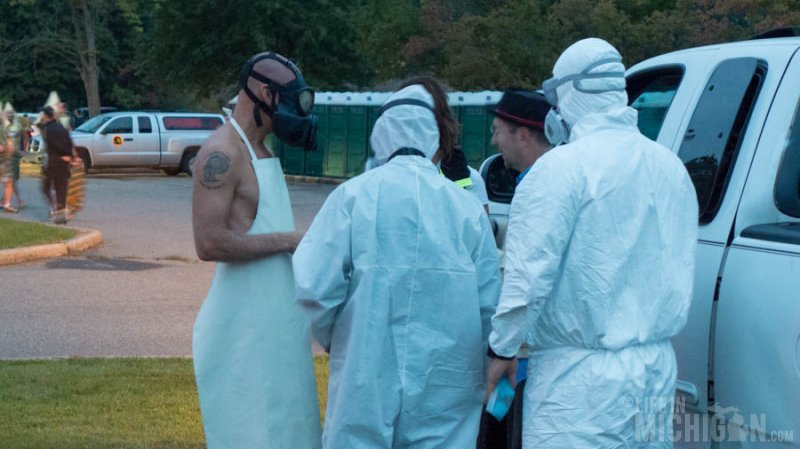 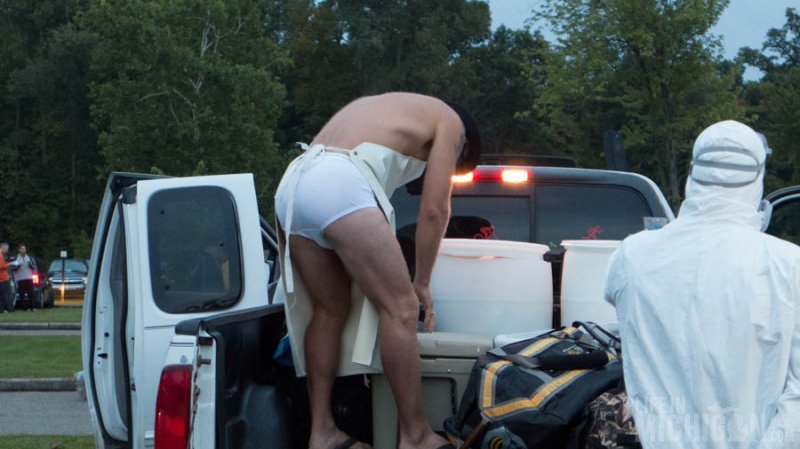 At one point Walter White’s tighty-whities were tied to the antenna of his truck. I’ll leave that up to your imagination. Again, you need to be young, uninhibited, and inebriated to pull this look off. 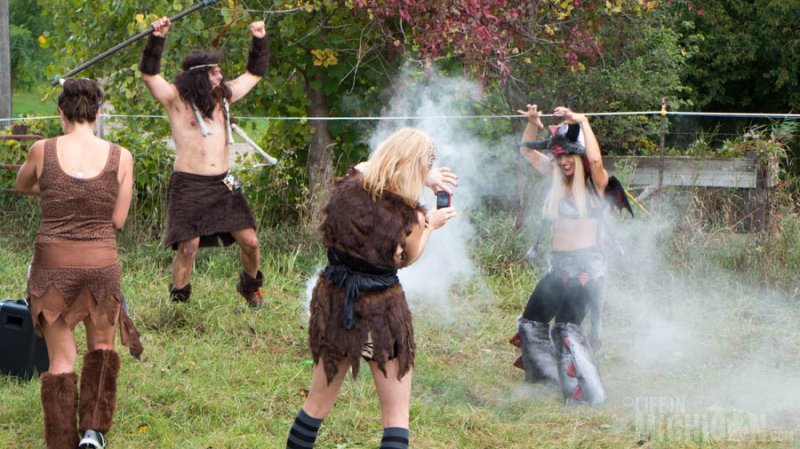 Not only could they run but they could dance too. They put this performance on at the Hell Creek Ranch exchange.

We were representing the Dark Horse Brewing Co. Chuck explained that it is like Son’s of Anarchy MC but we are an RC (running club). Hmmm. I’m going to go along with him on this because I really love him and Dark Horse Brewing beer. I also think our team shirts were pretty cool. And yes there was nudity when Chuck stripped off all his clothes at the farm after finishing the “Everything’s Bovine” leg. 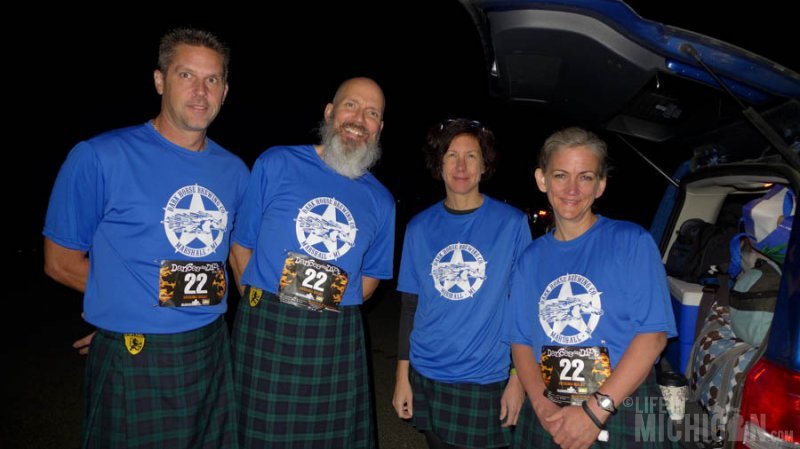 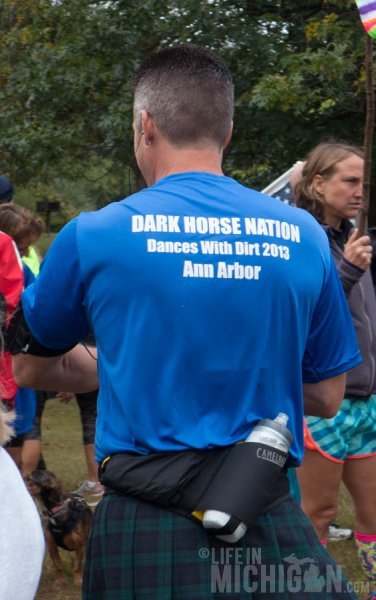 Hence the name, “Dances with Dirt!” and the number one reason most runners love this race. Except for Anne. She worked hard this year to avoid running any legs that involved mud. During the 2012 Dances Dirt Race, she was a trooper and volunteered for “This Sucks”  but this year she wanted to avoid mud. I loved her reaction when she discovered they’d changed the ending for the Vertigo leg (a 6.95 mile leg with nasty downhills that may give you vertigo).  You can’t hear her but her body language says it all, “Wait, I just ran Vertigo, I didn’t sign up for this. WTF”. 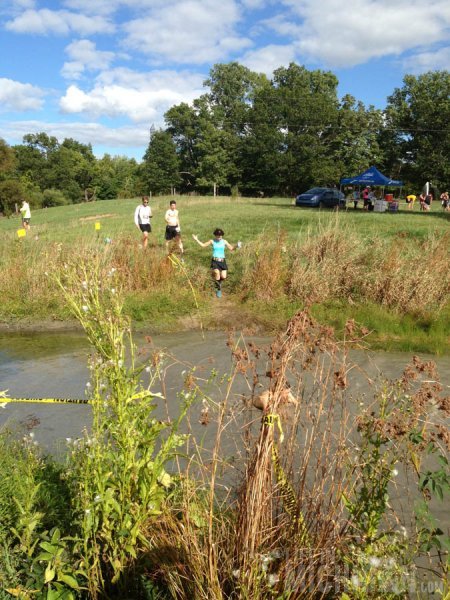 You can’t see the crowd standing behind me as I took this picture. There are about 200 people, chanting “Cannon Ball!” To avoid shame, Anne waded into the e-Coli infested farm pond. Yes it smelled like cow manure. 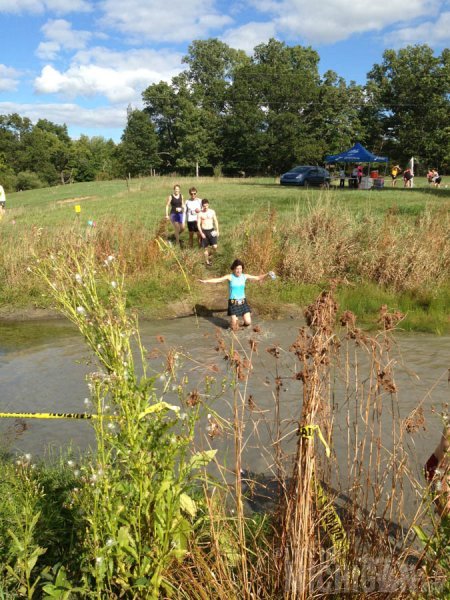 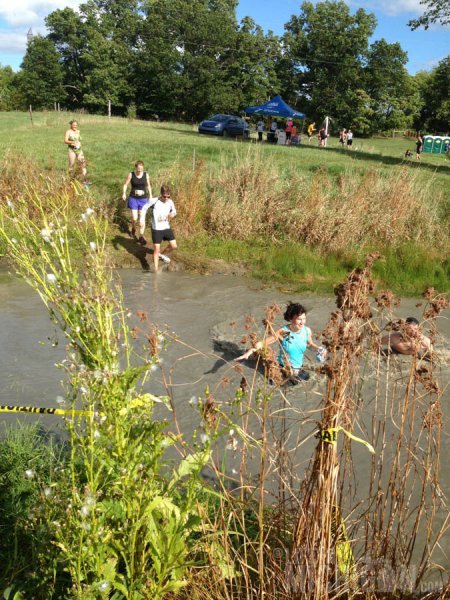 The mud and difficult legs are the primary reasons it is almost impossible to register for this race. It is first opened to the previous year’s teams before registration is opened to new teams. Any open slots are filled almost immediately.

It is an all day party, another reason why it is a popular race. The beverage of choice for many of the runners was cheap beer but because we are old and can afford it, we brought  Tomintoul Scotch and because we have good taste, our cooler was stocked with Michigan Craft Beer! 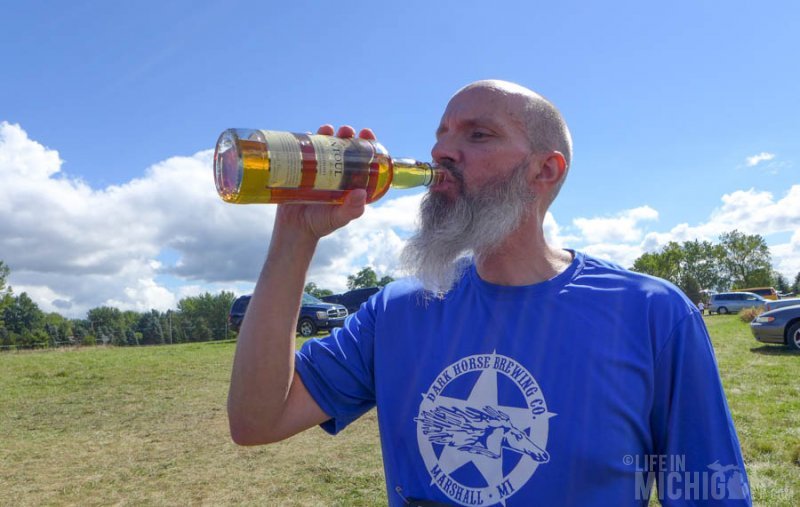 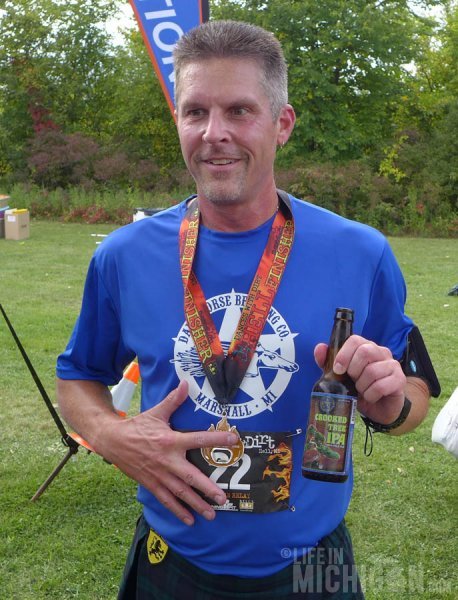 The number one reason why I love this race?

It is a great day of running with my best friends. There is much laughter and camaraderie in a beautiful setting. We shared an experience that can’t be described or forgotten. We have many photos in our gallery.