I am so sorry if you missed the 4 Elf Party at Dark Horse Brewery on December 14, 2013. OMG what a party. It is a beer sale, music event, food experimentation, beer drinking, dancing, good time. Chuck had one goal this year, to not pass out before the Muggs came on the stage. He managed to achieve his goal and take 600 pictures of the event. It was a painful process, but he selected a few photos of the party (83) and many more the bands. You can find all of these in our photo galleries.

This is why I love this man. He is definitely not inhibited, especially after a few beers. 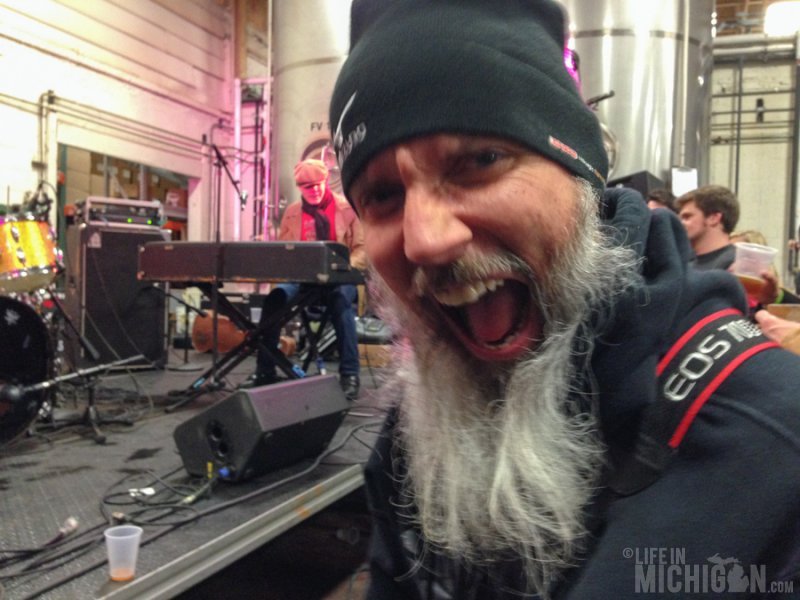 Dark Horse beer enthusiasts gathered the day before to get their order numbers. We were not one these beer enthusiasts so we do not have any first hand stories for you or pictures but you can find photos on Dark Horse’s blog. Yes, you understand correctly, beer nuts were standing in line all night so they could be first in line to buy Dark Horse beer. It reminds me of the days when you’d sleep outside Hudsons so you could be first in line to buy concert tickets. You probably have to be over 40 to remember.

Before I get into all the party details I really need to give a shout out the DH staff. They are amazing. No I’m not sucking up! They work super hard and have to deal with all us crazy beer enthusiasts and they do it skillfully and with a smile. 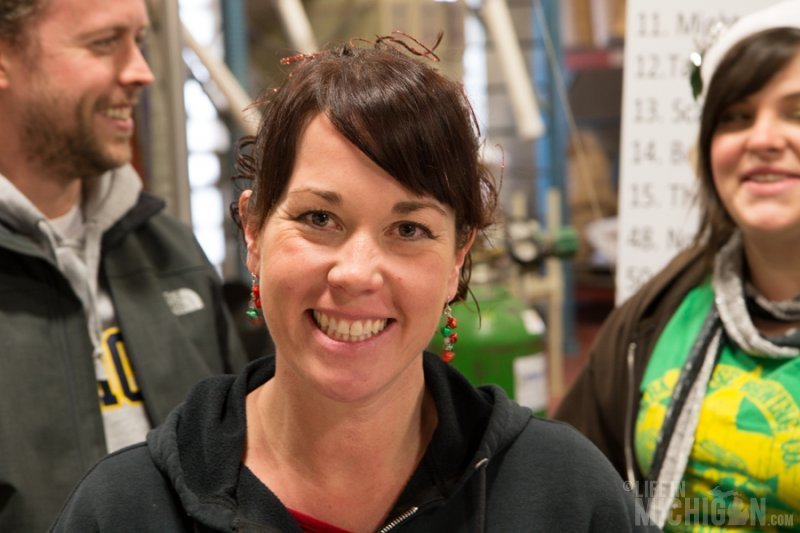 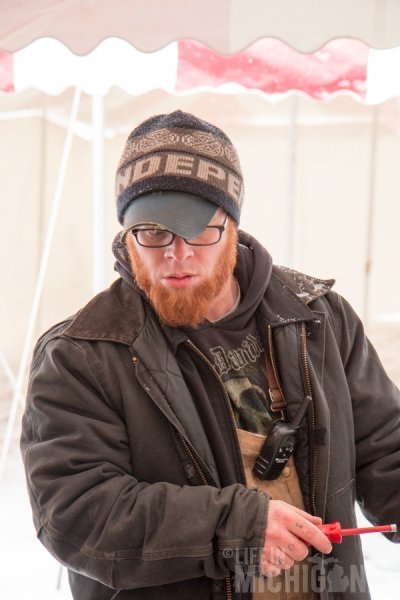 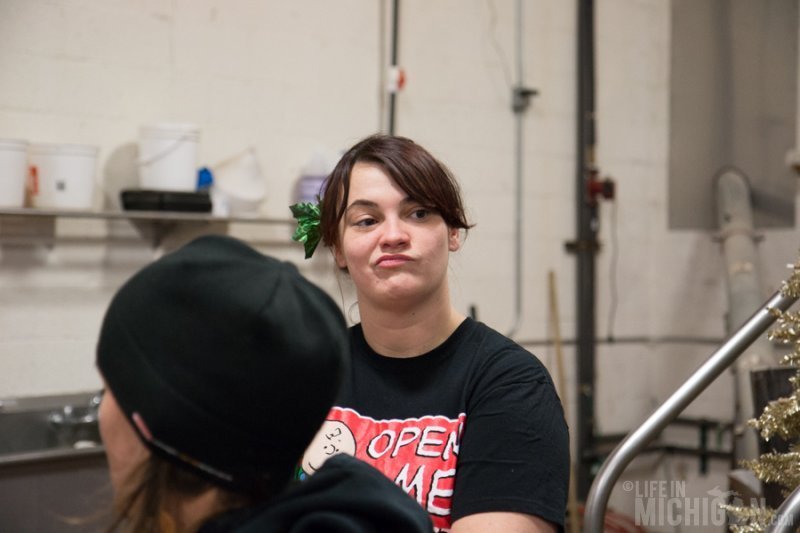 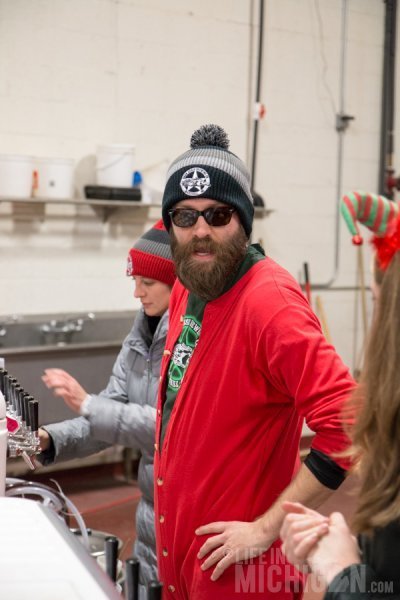 I am vegan so eating alligator wasn’t my thing but sampling exotic food was an option for some of the party goers. 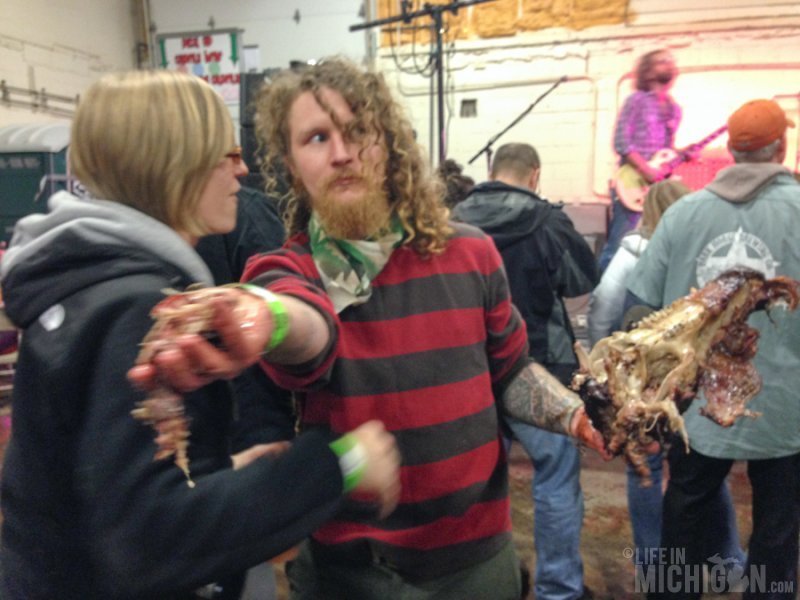 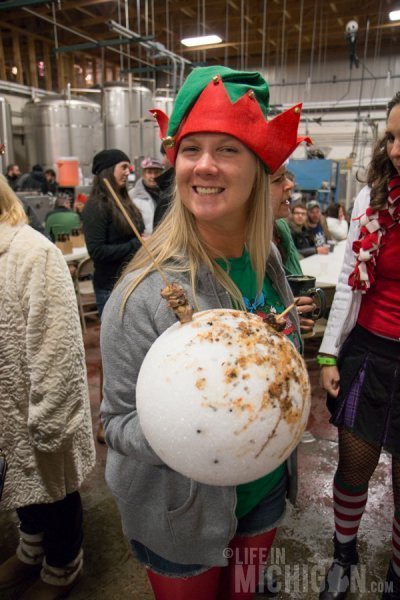 Three beer stations and I think 50 choices. If you drank too much there was a taxi service available. We had to use this service last year. Love Go Dad. 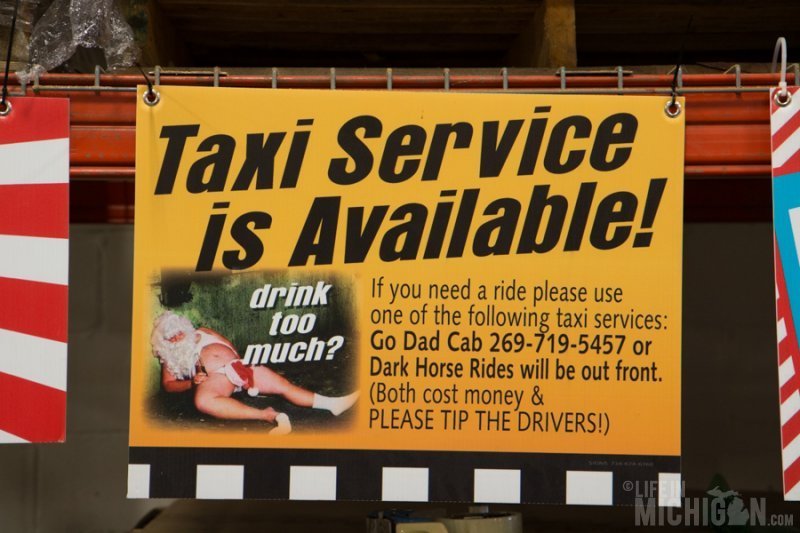 I didn’t try but I heard that the Bacon Beer was very BACON-Y and popular. You could garnish with a slice of bacon. 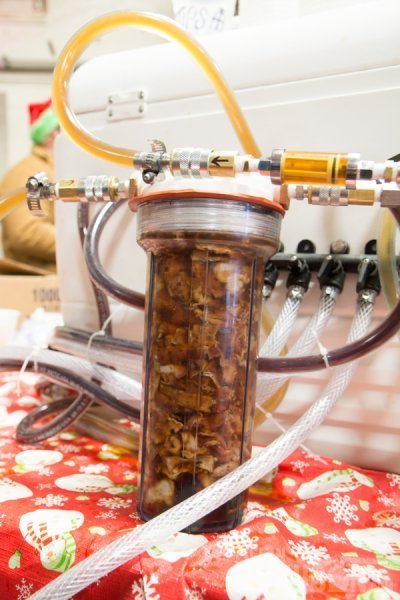 Chuck’s favorite beer was the anniversary ale, “Beer is Dark“. Mine was the “Flat Sammich Malt Liquor“. My other favorite was the “Mighty Peach Basil“.

Beware of the Pink Band

I have a whole new respect for the DH staff after witnessing someone almost getting one of these…. 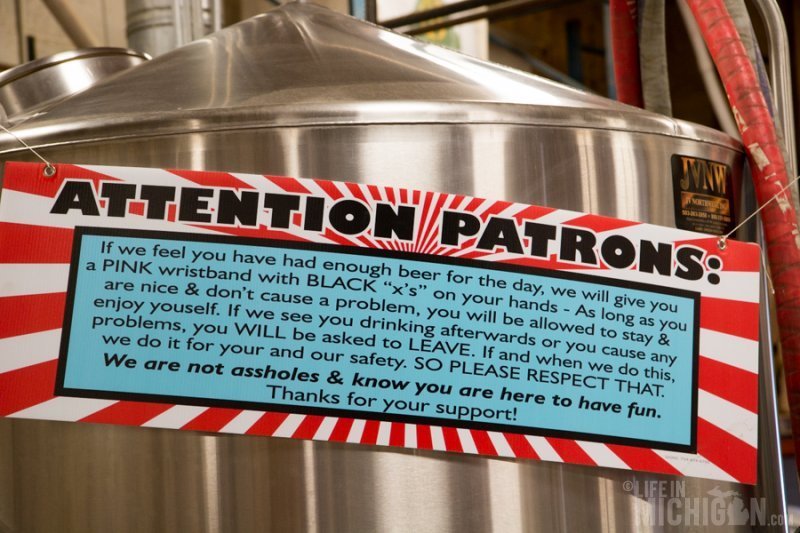 Hey there…this is Charlie writing about the music portion of this shindig.  I love Dark Horse beer, but the music was the main event for me and Brenda. The lineup included the Dark Horse crew band, Lahnkolt.  The Massholes (featuring Dark Horse’s very own Massie Lawson and the dudes from the Ohio punk band Legbone). Almanack, a smooth country outfit playing their very first gig.  The super fun bluegrass band from Detroit, Rickett Pass. And wrapping it all up with a bow on top were Detroit’s very own, Muggs.

Lahnkolt is made up of some of the crew from Dark Horse. They rocked some seriously heavy Sabbath inspired tunes. Massie Lawson (Dark Horse Southern sales) joined the band for a really cool cover of “Call Me” by Blondie where the band riffed Sabbath’s “Children of The Grave”.  I had no idea that those tunes would meld together so well. Very cool mash up! 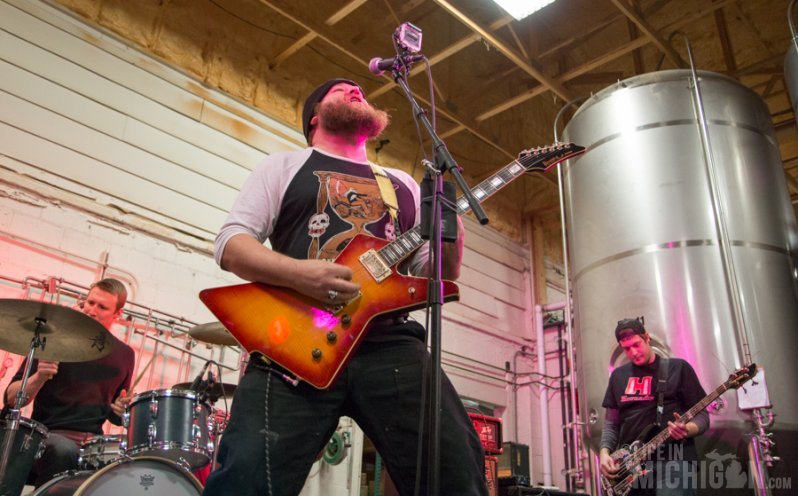 The whole band was tight and played some great tunes (unfortunately, I don’t have their setlist to rattle off for you!).  A great way to start off the music extravaganza at 4 Elf! 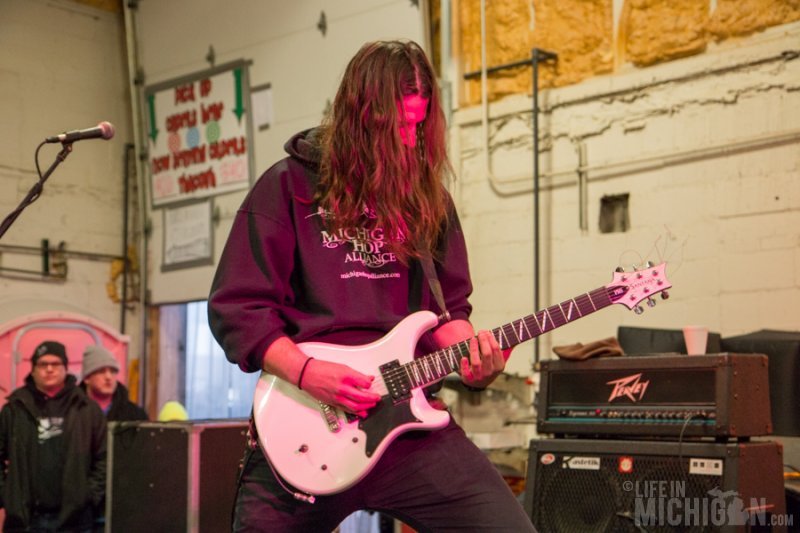 You can check out more pictures of LahnKolt in their very own gallery!

Massie Lawson and the fellas from Legbone are The Massholes! 🙂  I heard a few folks during the day saying “hey…there is a band called The Massholes…isn’t that funny?”  It is funny and you know what?  They were a ton of fun!  Legbone has been bringing punk to the Dayton, Ohio area for over 20 years. 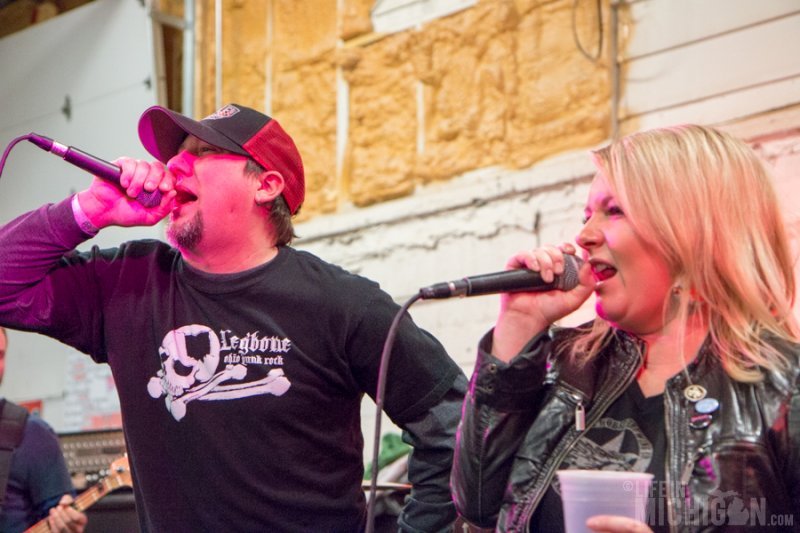 They tore up the stage doing a some great covers from the Misfits, Ramones, and NOFX. These featured both Massie and Kyle Curtis on vocals. 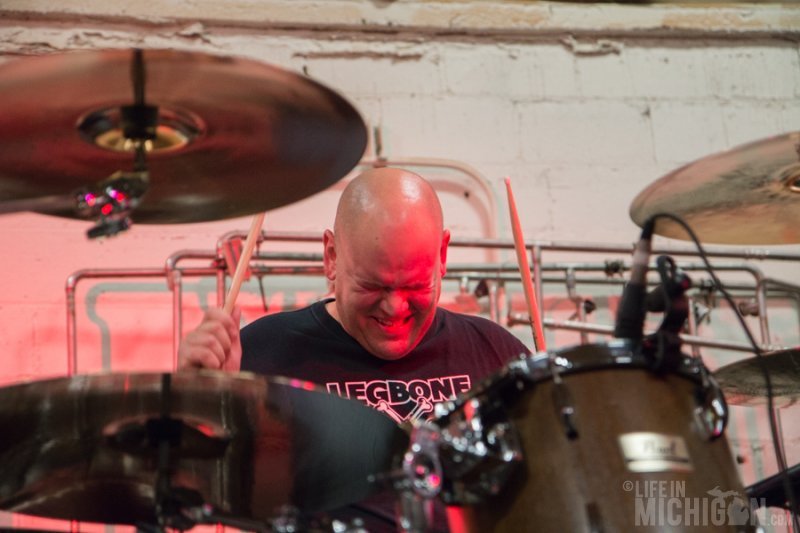 They did a couple Legbone originals with a beer theme (just for us beer fans :).  Not sure on the titles, but I know one was about being hungover and I could swear it was called “Re-Beer” 🙂 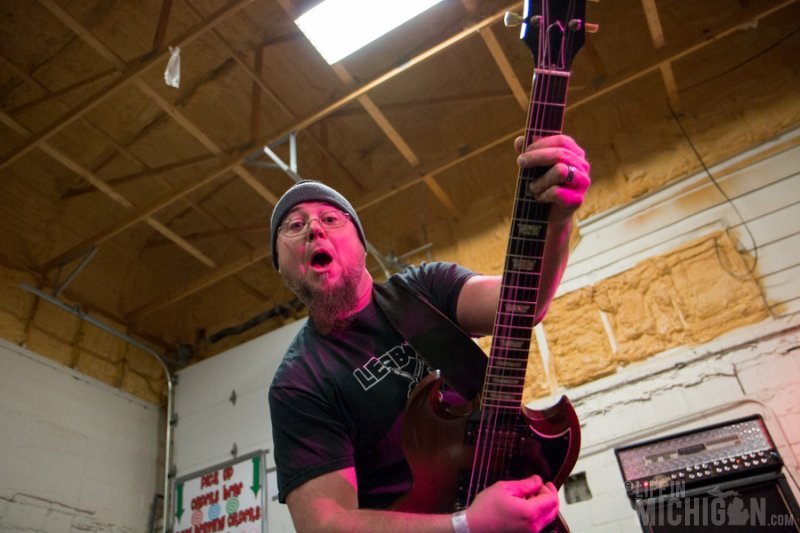 They finished up in a HUGE way with Massie doing vocals on a few Clutch covers!!  I totally loved these guys, but when they played Clutch, I was in heaven!  They rocked out “Supergrass” and one of my all time favorites “A Shogun Named Marcus”.  How great is that!!

Be sure to check out more pics of The Massholes!

This was Almanac’s very first gig.  What a way to start out!  They played a nice mix of what I’m going to call Americana country.  Not pop country and not honky tonk.  I sort of thought of Bob Dylan and Tom Petty, but with much better vocals. 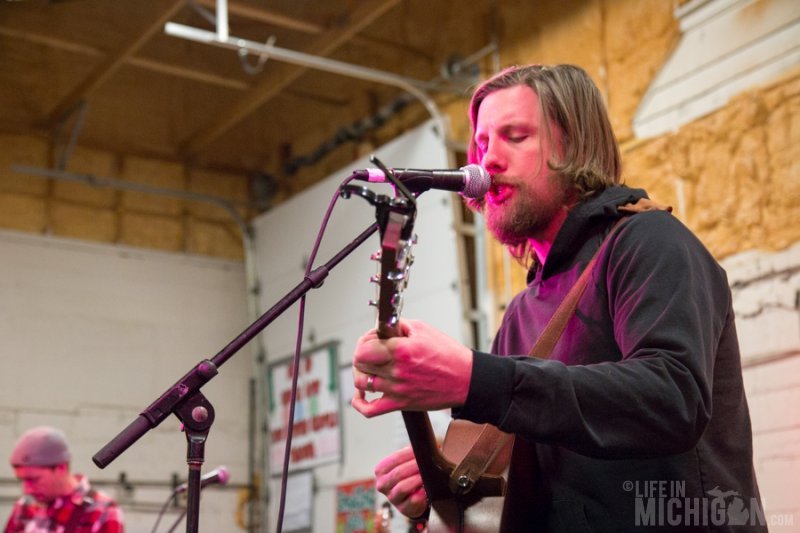 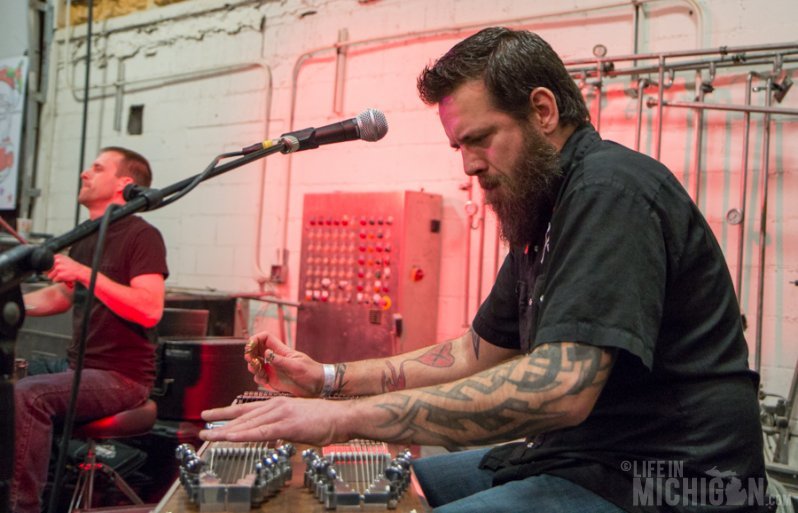 Quite a change of pace from the earlier bands, but a nice break from the mayhem.  Almanack closed out their set with a cover of Bob Seger’s “Against The Wind” which got a couple dancing. 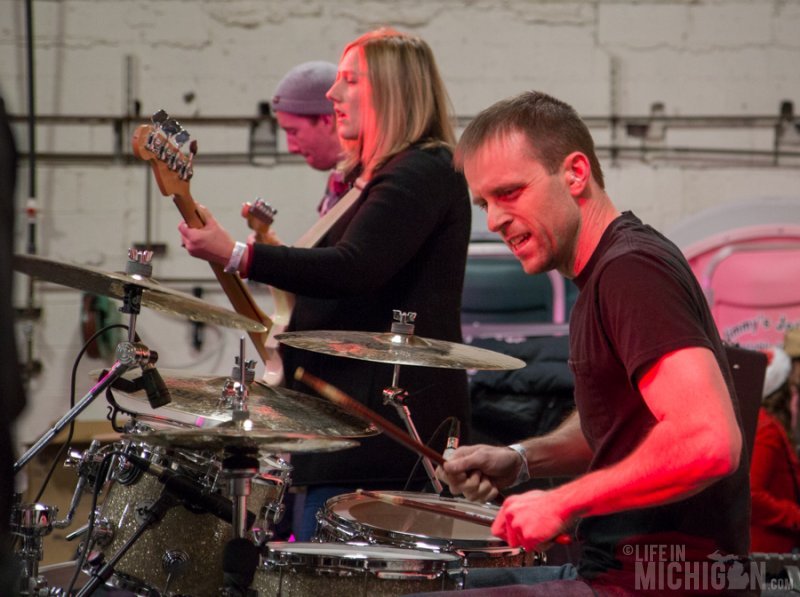 The Almanack gallery has more pictures from their performance.

I’ve always thought of bluegrass as the “thrash metal” of country music. Its typically fast, with great musicians having a great time and tearing it up while telling a story.  Rickett Pass fit that bill nicely.  These guys were great!  So much energy and you could see that they loved to get people fired up and happy. 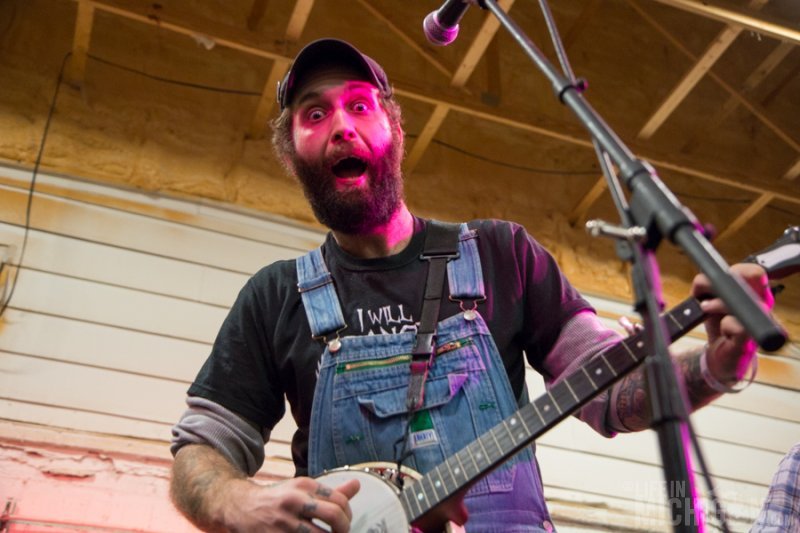 You couldn’t help but get moving when they were playing.  The crowd at Dark Horse loved them as did we! 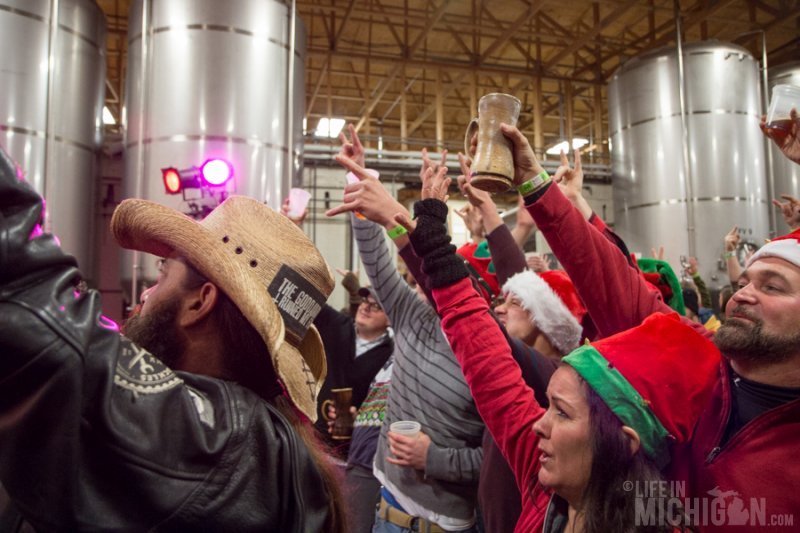 Mason and Joe did some duel guitar playing which brought a smile to your face.  Seeing people having fun playing music, just makes you feel good! 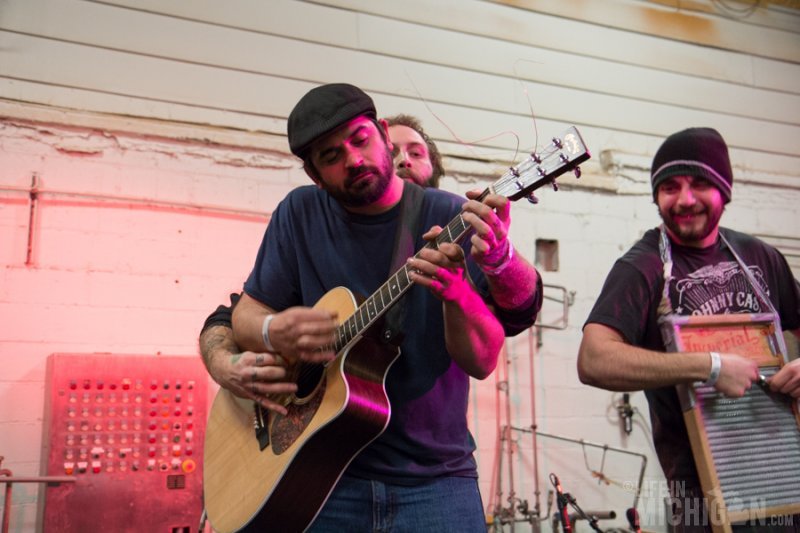 I didn’t know their music before hand, but I did catch the names of a couple of tunes. “Can’t Scare Me” was my favorite, with “Cocaine” being a close second.  If you want to have a foot stompin good time, be sure to go see these guys live! 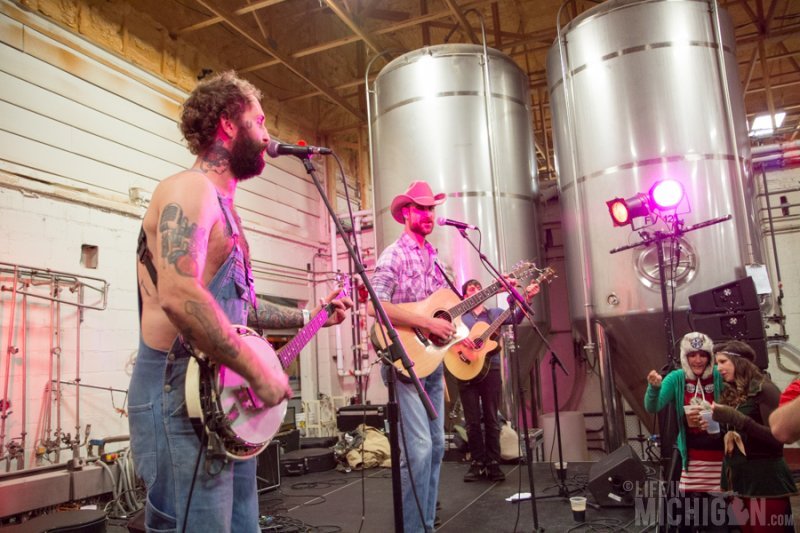 Stop by the Rickett Pass gallery to see more of them!

I was enjoying a beer at the Detroit Fall Beer festival and kind of tuning out the music, as it was techno (which I’m not really into).  Well, as I was talking to Brenda, Jeff, Angie, and our buddy Steve, I heard some music that caught my ear.  You know that moment, when you go “Damn..that rocks!  What is that?” and then you have to find the source. That is how I first heard The Muggs!  I bought their cd, “Full Tilt” and was beside myself when I saw they were playing the 4 Elf party. 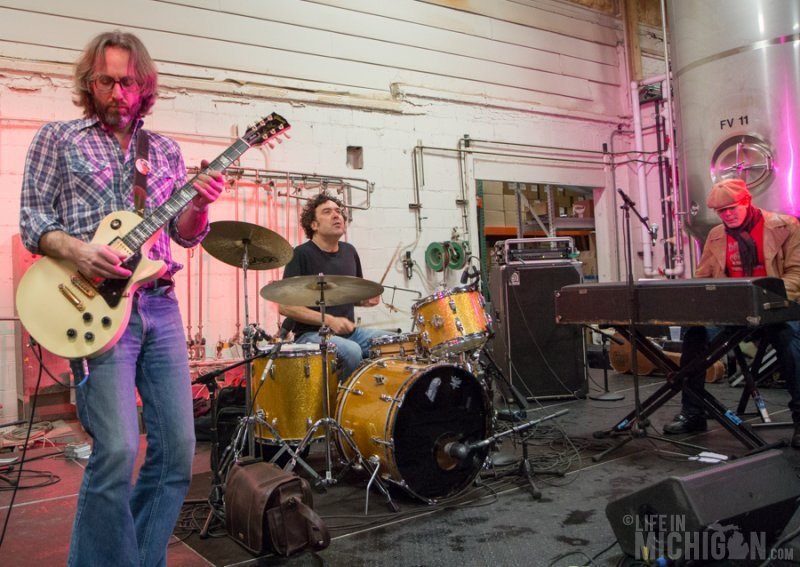 I think what I dig most is the heavy hard hitting groove that these guys have. 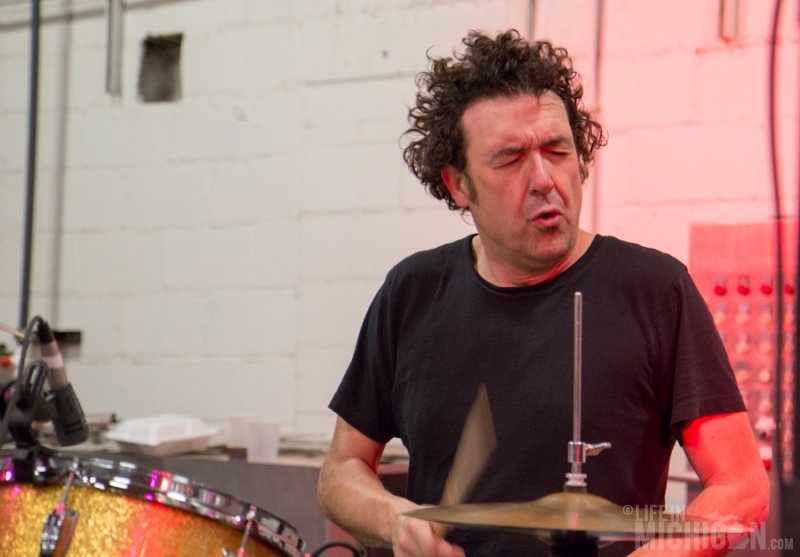 Based in the blues, these guys rock!  With Todd and Tony keeping things tight in the groove, Danny can let it fly on the Les Paul. 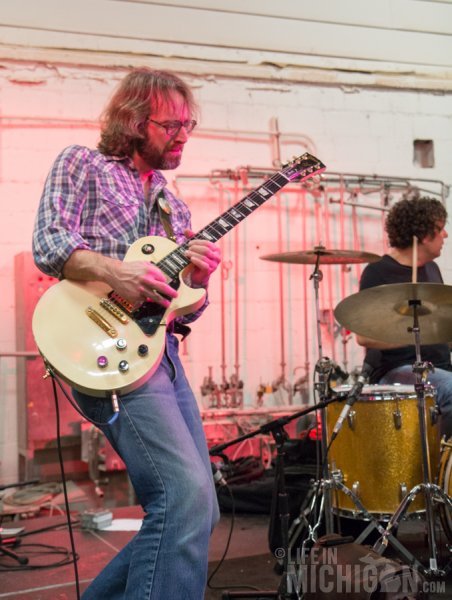 The Muggs came out swinging and didn’t let up.  They had this young lady dancin up a storm! 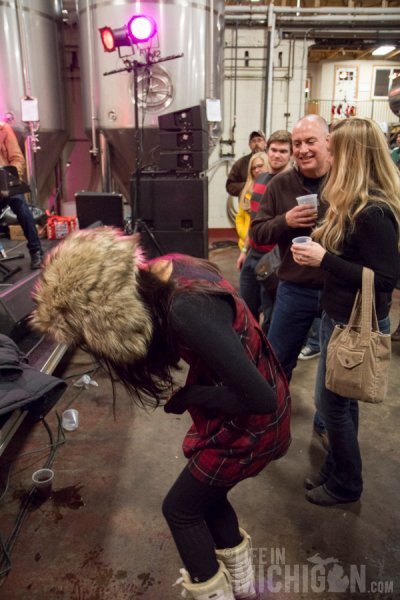 We’ve got more mug shots of the The Muggs in our gallery.

What a party! Thank you Aaron and Kristy. Sadly we don’t have a picture of the elusive Aaron Morse but everyone at the party knew that he along with Kristy, Wiggs, Joanna and the rest of the Dark Horse crew were working hard to make sure we had a great time. 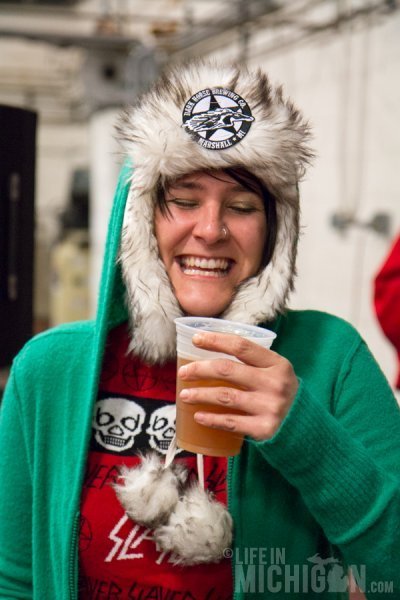