A friend recently asked, “What do you do at a Beer Festival?” Well Frank, the easy answer is we drink beer but we could drink beer in a bar or on our patio or in a friend’s living room couldn’t we? And it would be warmer and dryer but drinking beer is not the only activity at a beer festival.

Frank this is what we do at a beer festival besides drink beer.

Meet and Greet with Victor

With his megaphone in hand, Victor instructs festival goers on the rules and etiquette for the day. “If you are a DD and drink beer at this festival, I will publicly hate you!” he warns. You gotta love Victor. 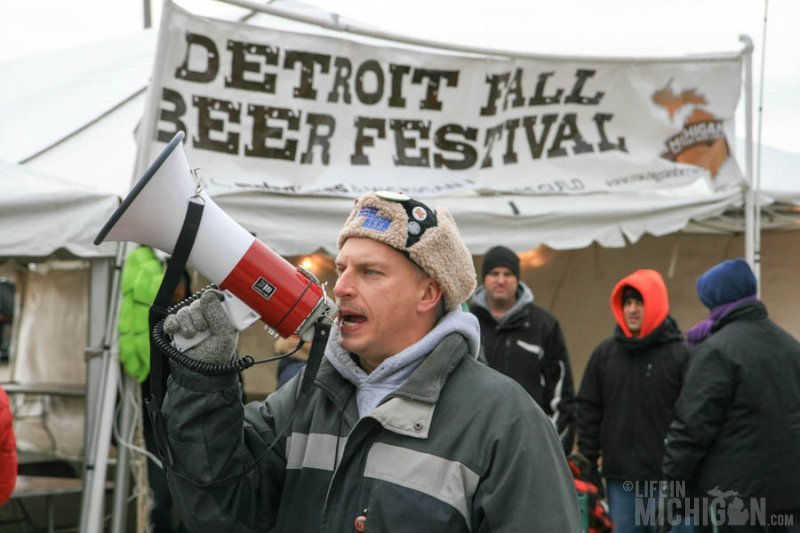 Part of Victor’s job is keeping the Michigan Beer supporters that haven’t purchased an Enthusiast membership yet, behind the gate while those who have purchased a membership enjoy an hour of early admission to the festival. The membership is worth every penny. 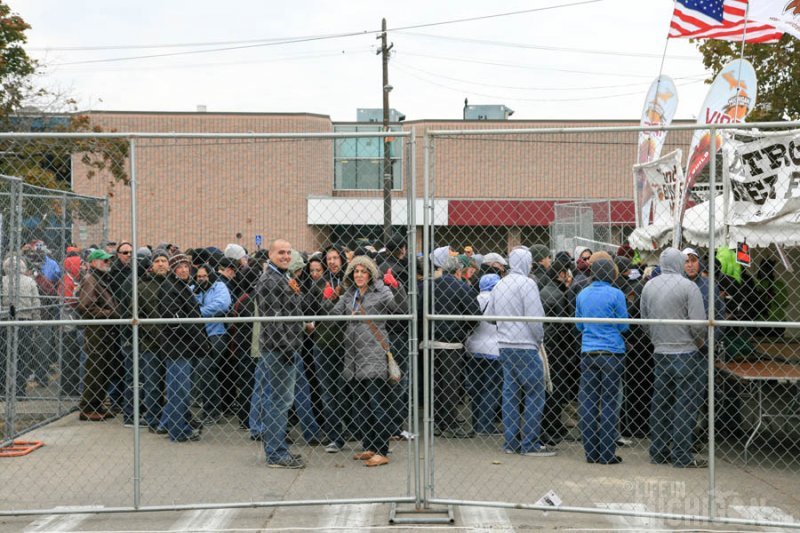 This guy was very happy to finally join the Michigan Beer Enthusiasts. I bet he has already bought a membership! 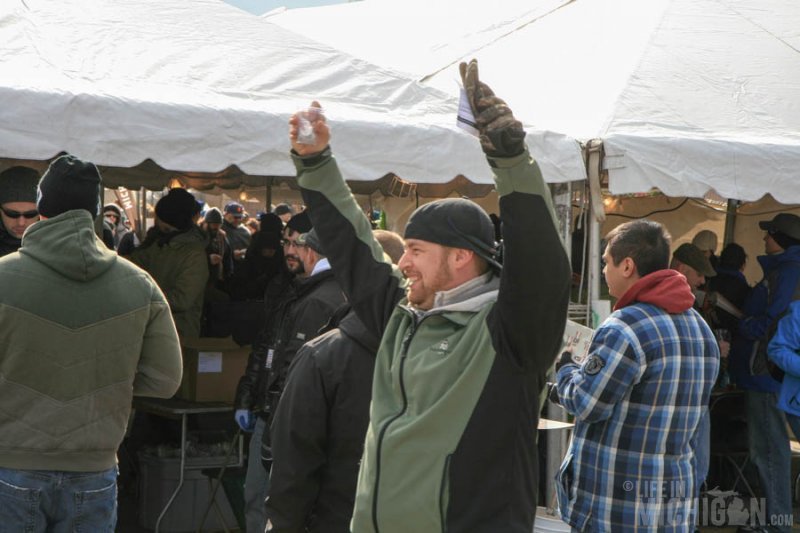 Frank, the primary reason for attending the festival is to sample beer that is only available at the beer festival or the brewery tap room. You get unique beer tailored for the festival. So for example at the Fall Festival, you get spicy, dark beers with a pumpkin theme. There were over 60 breweries and nearly 450 beers at this year’s Detroit Beer Festival. Having a solid breakfast on board before you arrived was key! 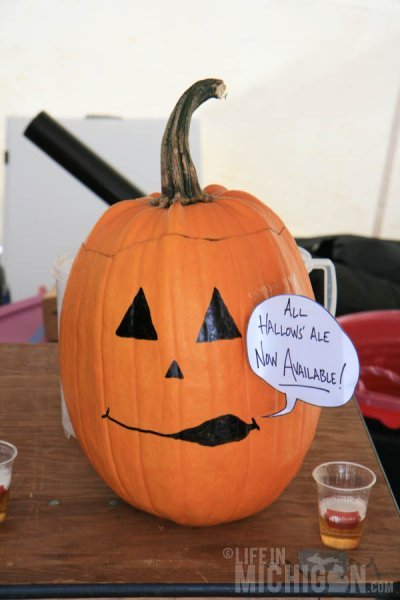 Oh my, Kuhnhenn Brewing Co from Warren had some great beers at the festival this year: DRIPA, the Fluffer Gone Wild, a sour pumpkin beer that we can’t remember the name, plus Rocks in the Rye – Faygo. It was my personal favorite. Kristy from Dark Horse Brewery told us that Kuhnhenn’s tap room staff worked with the brewers to create a beer for the festival. I don’t have all the details but as I understand it, there was a competition and Rocks in the Rye was the winner. 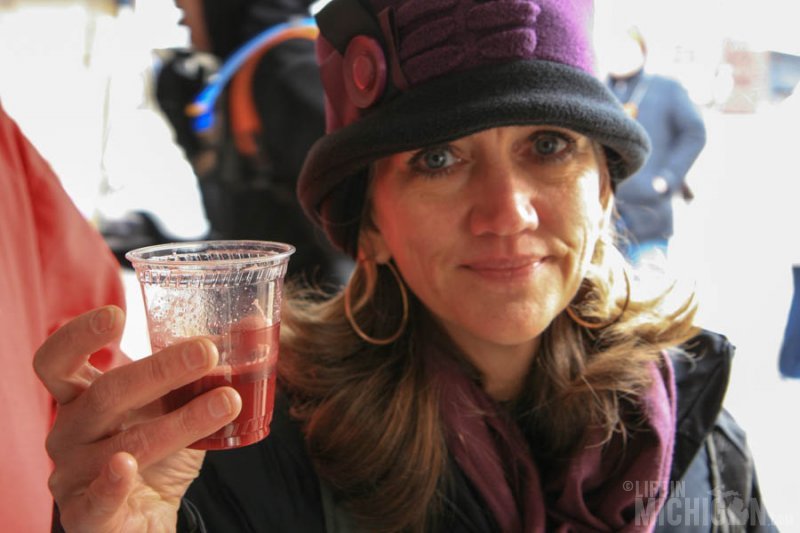 The Educator from Cranker’s Brewery in Big Rapids was Chuck’s personal favorite: a fabulous double IPA, with a nice grapefruit nose and a “hoplishous” taste. I tried their Chocolate Raspberry Tart and I thought it was damn good. 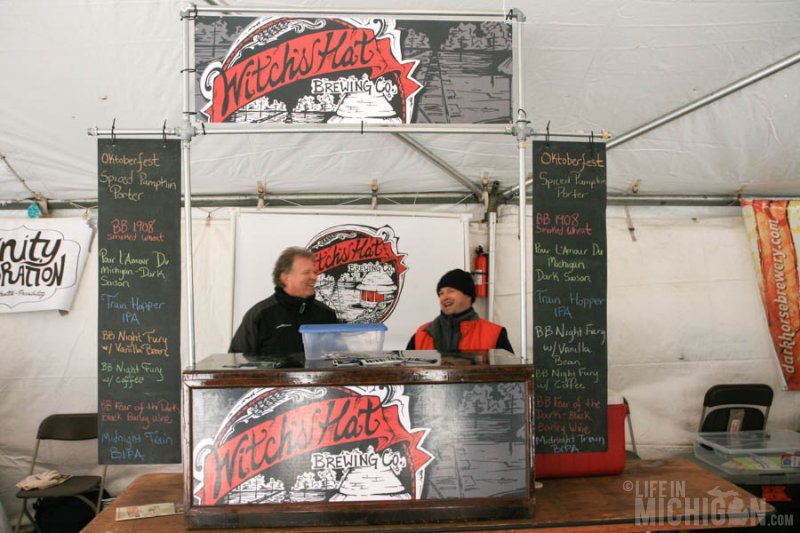 Chuck had to sit down after sipping the Bourbon-Barrel Night Fury Imperial Stout with Coffee from Witch’s Hat located in South Lyon. It gave him a head rush. Oh dear, the day was just getting started. No wonder the guys that were pouring were so happy.

We liked several from Detroit Beer Co. The Chocolate Pumpkin Porter and the Hop Grenade. FYI- if you can’t decide, which I couldn’t, combining these two beers is not a bad idea. 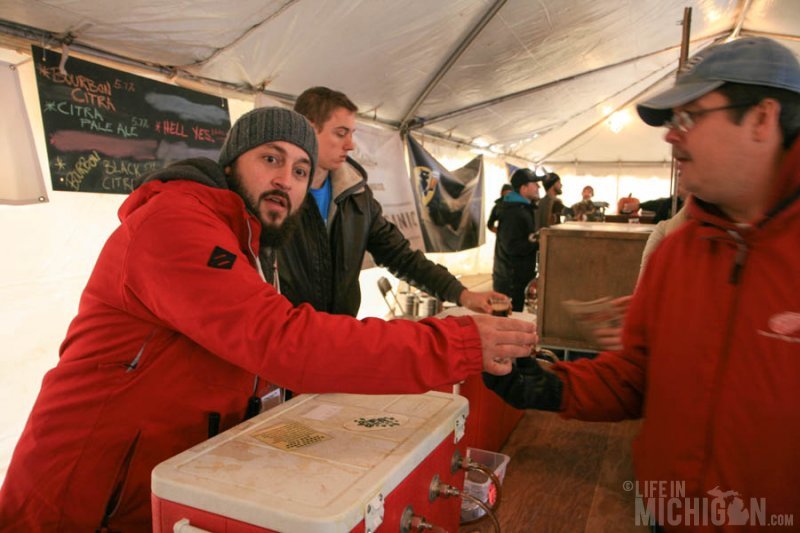 Chuck said the Bourbon Citra Pale Ale was a good beer from Odd Side Ales in Grand Haven. I wanted to try their Wheathermelon but it was out. They also had Fire Fly – Pale with Habaneros and Papaya. I didn’t consider trying, but see Frank, lots of different beers that you can only taste at the beer festival! 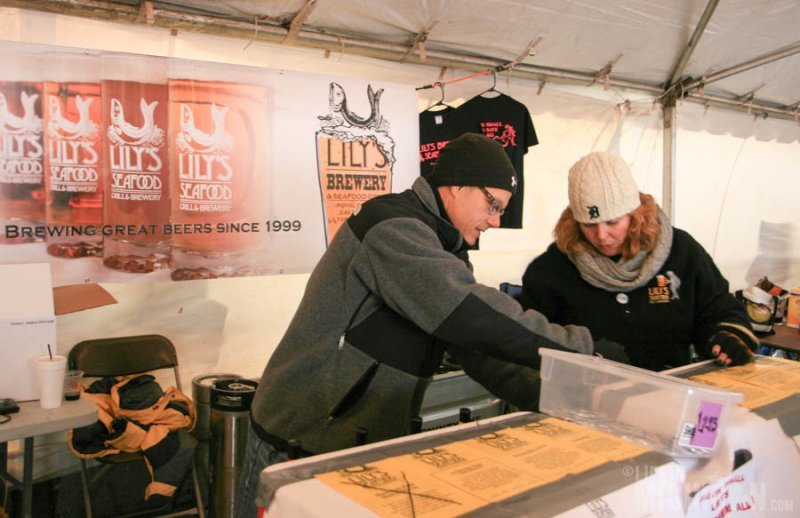 One of our last stops was Lily’s Brewery from Royal Oak. I’m so glad we stopped by as their  Sven & Ollie’s IPA was really good.

Frank are you getting a feel for the festival? Good! It is time to move on to the music. It is another reason to go to the festival. Live music is hard to reproduce in your living room but Chuck does put on a pretty good performance if you are lucky to be home when he is practicing. 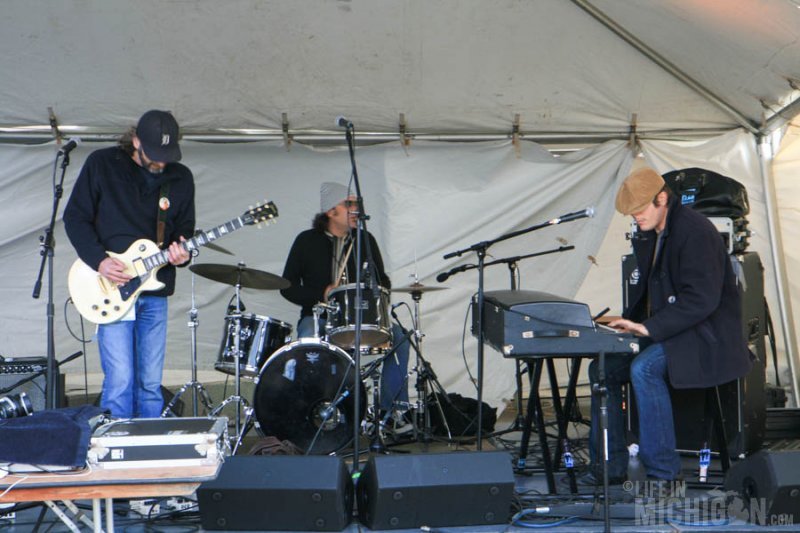 The Muggs are pure blues rock fury according to Chuck. When Chuck heard them, he stopped drinking and said, “What is that? It is live music! I must find where it is coming from.” He said, “It is everything you associate with Detroit, a gritty, blues-rock sound.” We have their CD. 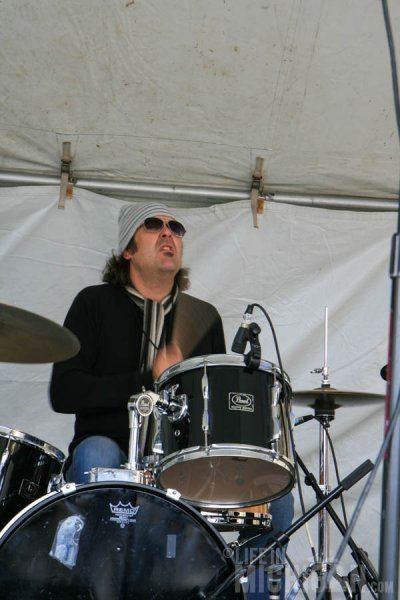 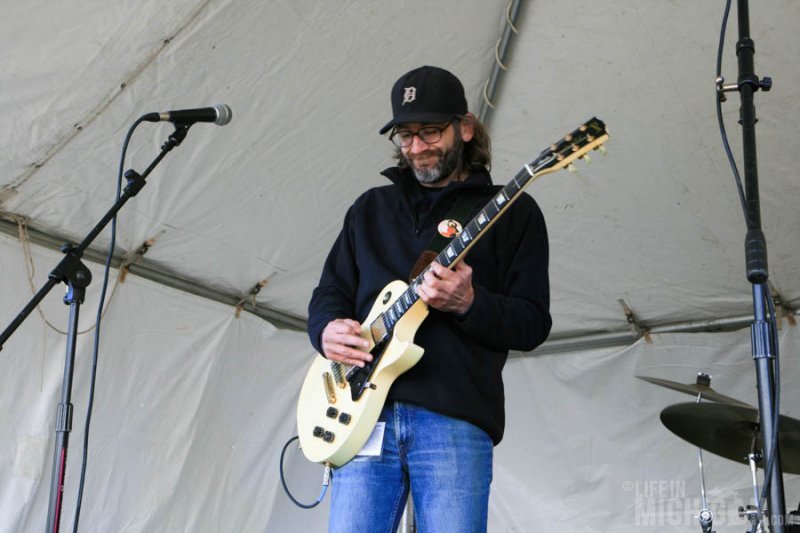 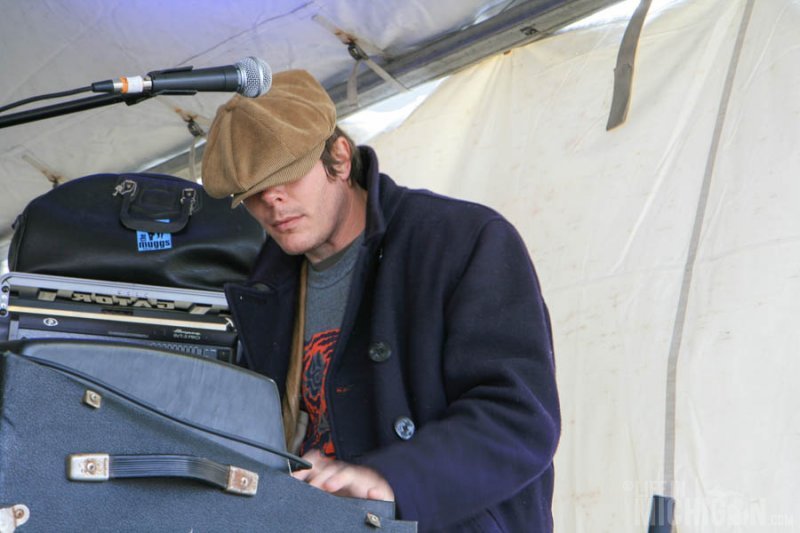 The crowd loved the Muggs! 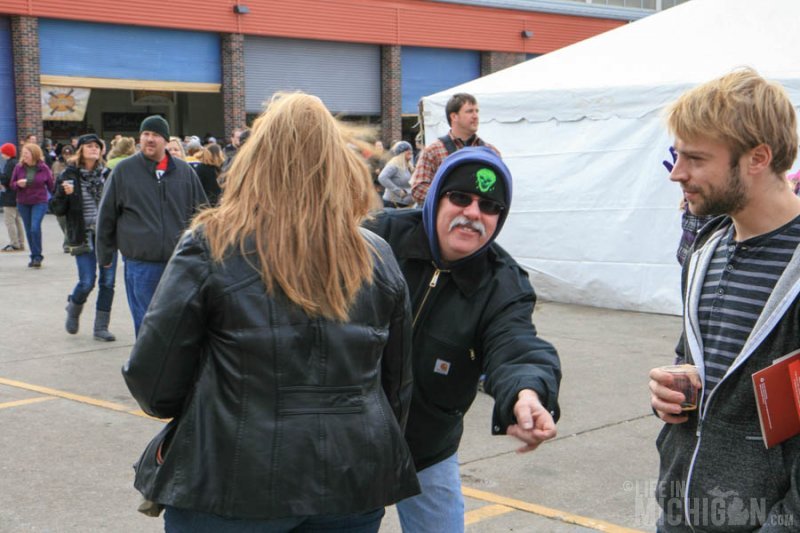 It isn’t a reason for attending the Beer Festival but it happens at the beer festival. Kristy and Joanna from Dark Horse Brewing were selling hats this year. We stopped by and said hi and sampled their beer. We love their beer and make regular visits to the Dark Horse Brewery tap room. I’ve got a thing for “Flat Sammich Malt Liquor”. It gets me into trouble if I drink too much of it, so I only drank one sample this year. Chuck had the “Tall, Dark and Crunchy’s” and always recommends. 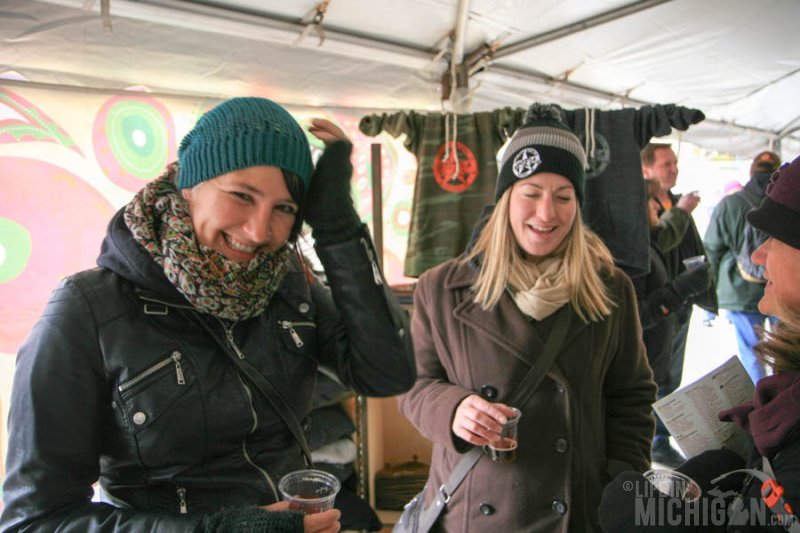 Ok we aren’t personally friends with the folks at Shorts but we feel like they are friends and we love their artwork. 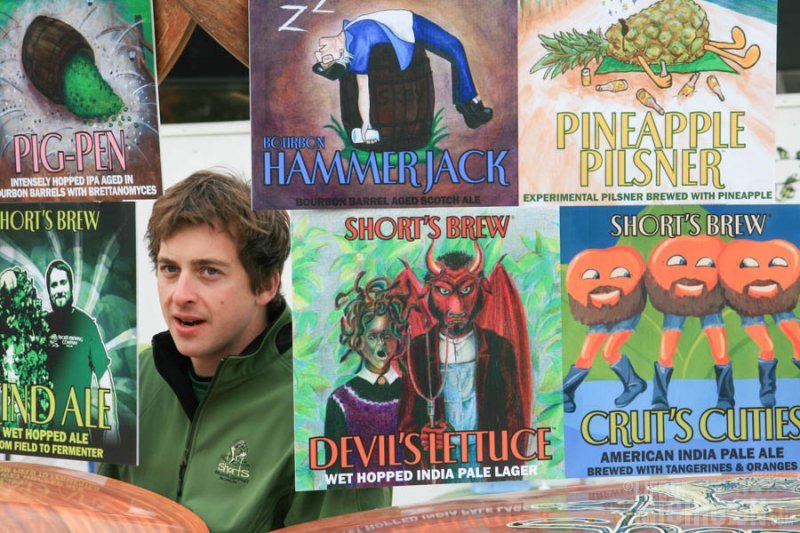 Shorts Brewing Co. in Bellaire had so many choices- Chuck tried Funkin Punkin and Sticky Icky Icky and liked both. I’m pretty sure I tried Crut’s Cuties but called it Curt’s Cuties… Lol. All were good.

Frankly Frank the last reason to attend the Detroit Beer Festival is to people watch! 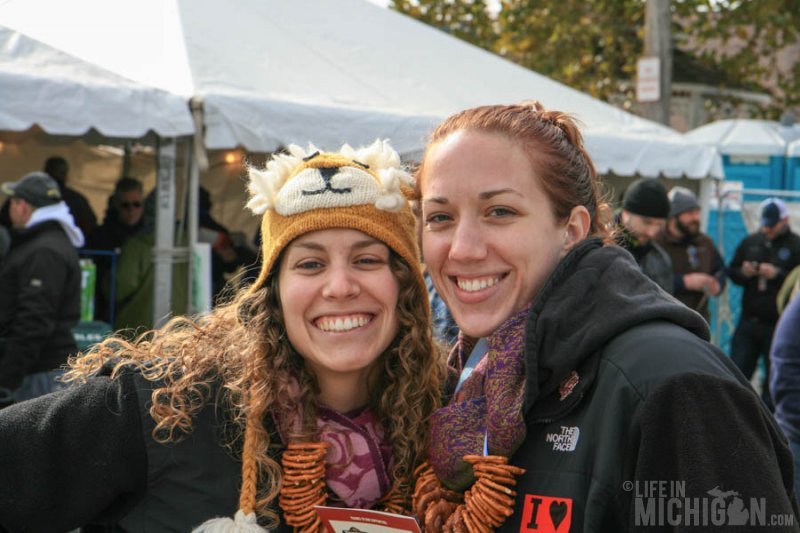 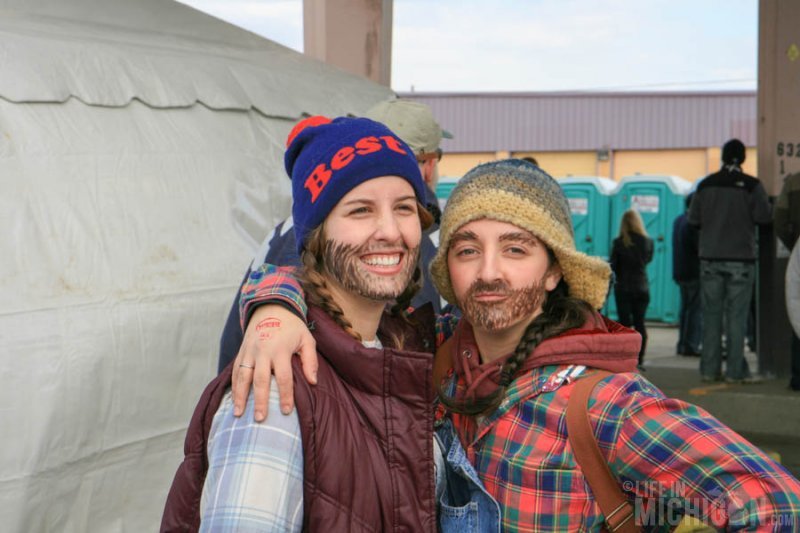 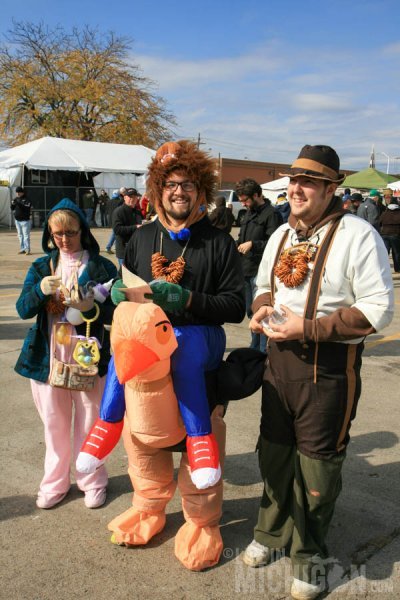 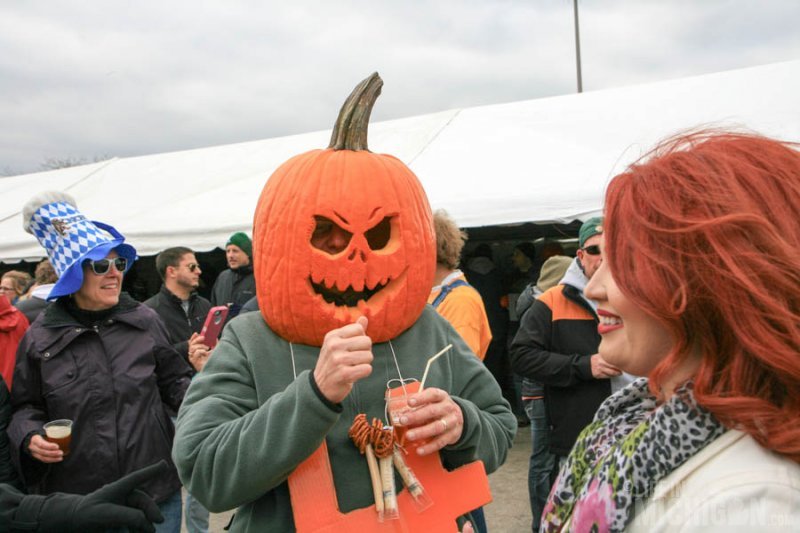 We have lots more pictures in the gallery!