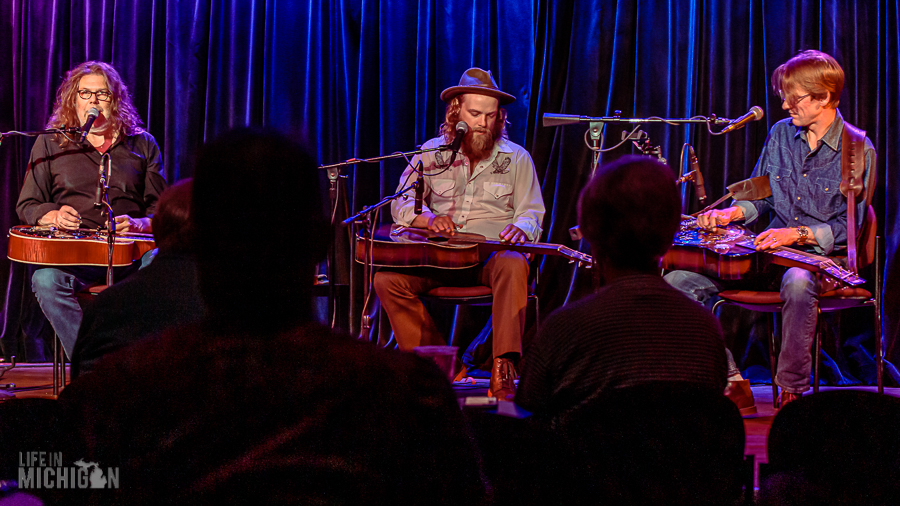 It is a lofty goal to try to heal the world. I know for a fact that music makes my world better. I reach for the soothing balm of music on a daily basis. When I saw that my friend Mark Lavengood was teaming up with Joe Wilson and Drew Howard to use their musical superpowers at the Ark to heal the world; I felt compelled to be a part of this evening.

The idea behind this magical evening of world healing came from Mark Lavengood. He mentioned during the show that Drew and Joe had inspired him to play the dobro. In particular was an album of steel guitar that Joe and Drew recorded in 2008 called ‘Steels Heal The World’. What could be better than getting to play music with your heroes? By the way, I’ll be picking up this album pronto as I missed the boat when it first came out. 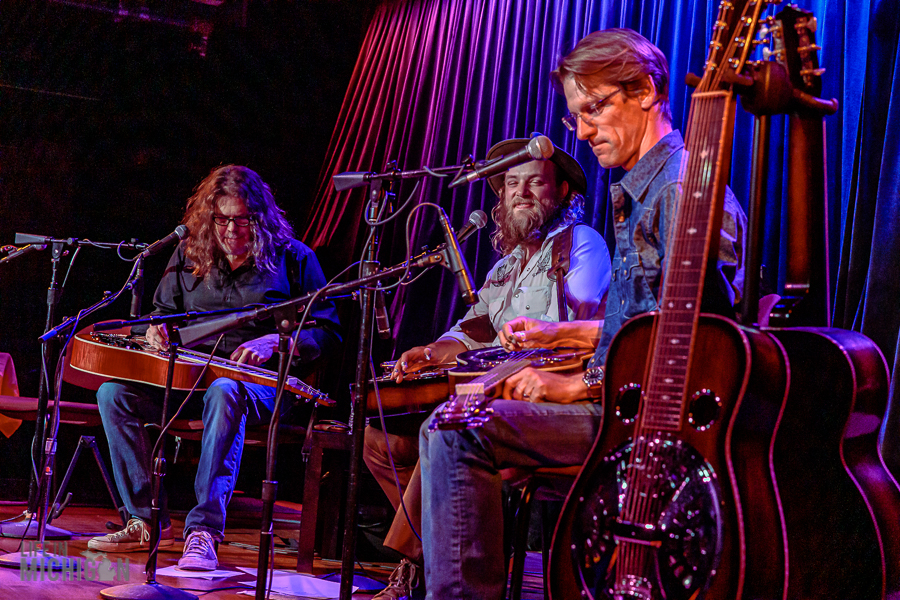 In case you are wondering what a dobro is, it is a brand of resonator guitars. These are acoustic guitars that use metal cones (resonators) to amplify their sound. The resonator guitar was invented in 1927 by John Dopyera. Guitars in a big band with horns weren’t loud enough and the resonator was created to solve that problem. John and his brother Emil formed the Dobro Manufacturing Company in 1928. A fun fact, the word “dobro” in Slavic means “Good”. A true sign that dobros can heal the world. 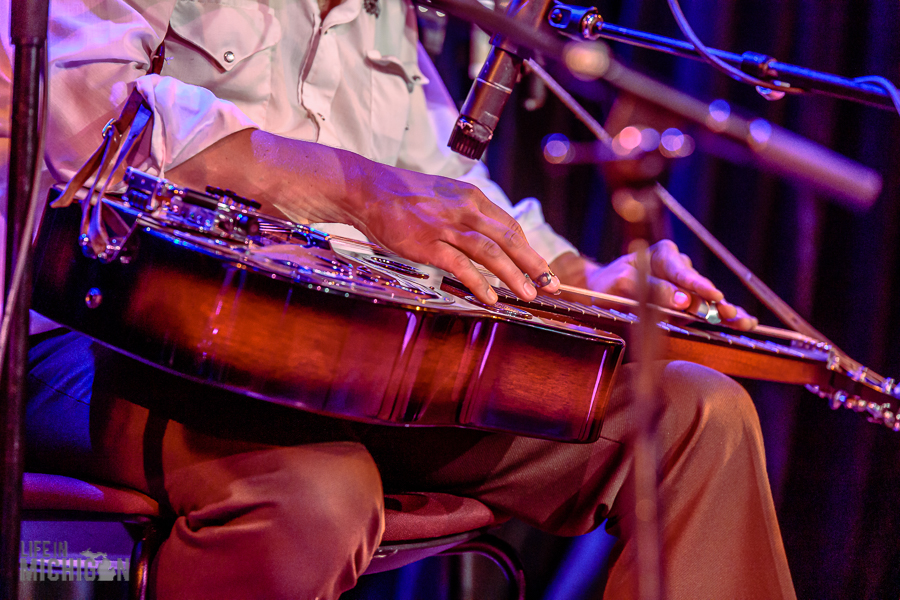 You may know the name Joe Wilson from his stellar steel guitar playing with the American roots band called Steppin’ In It. The band included his brother Andy, Dominic Davis, and Joshua Davis. After Steppin’ In It called it quits, Joe has been busy spreading the gospel of the dobro. His website called Dobrojoe.com offers free streaming dobro guitar lessons. For a small donation you can get downloads of the videos along with other instructional material. On top of all that you can take lessons from Joe and become a dobro wizard.

Drew Howard is a musical wunderkind. He has recorded on over 125 albums in just about every genre you can think of. He is considered one of the best steel and dobro players in the world. On top of a full schedule of playing and recording, Drew teaches guitar at MSU Community Music School and dobro and banjo at Elderly Instruments. 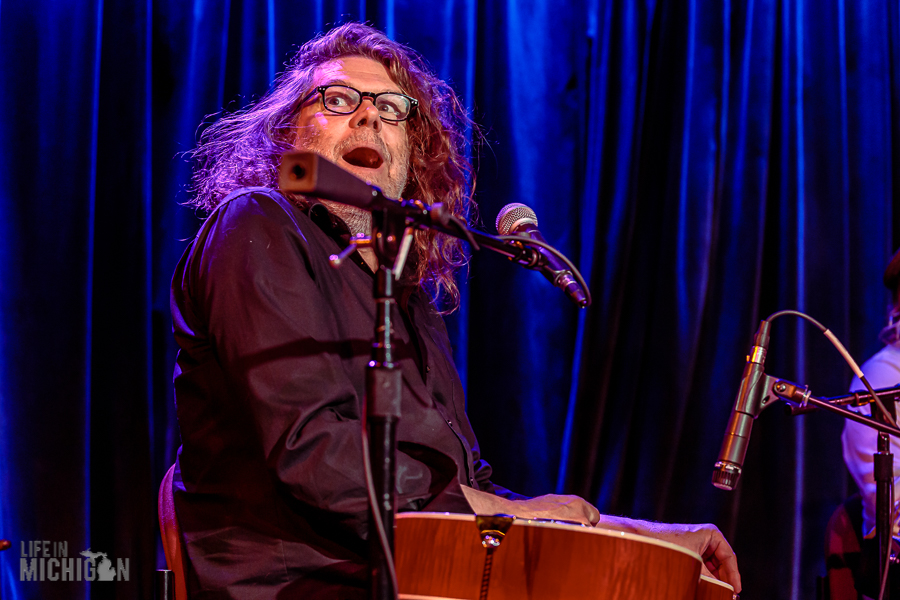 You will never forget when you met Mark Lavengood. Besides being an incredible musician, he is a marvelous person. Like his music, he lights up a room and pulls you in. Seriously, the guy will hug the shit out of you physically and emotionally. We met Mark at the Chelsea Alehouse when he was jamming with some of the guys in Thunderwude. We quickly became fans of his music and have been quick to catch his performances. In addition to touring and recording, Mark leads a creative consulting agency called appropriately Bear Mark Productions. 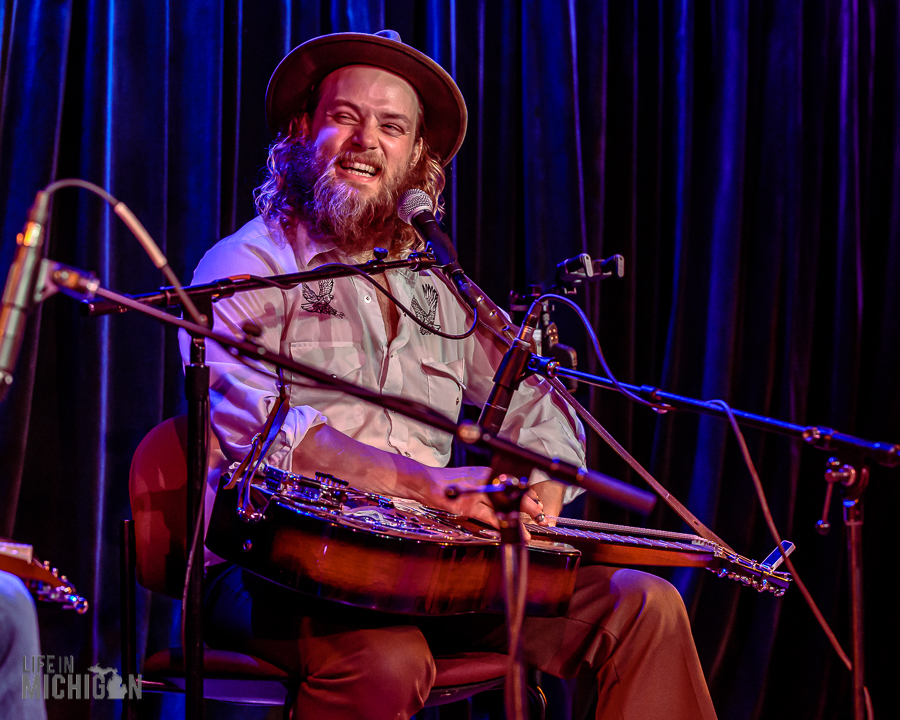 We made our way up front with tasty beverages in hand. Within a few minutes, Mark, Drew, and Joe made their way into the semi-circle of chairs with guitars in hand. The time for healing had begun.

Joe shared some history of the dobro and thoughts on this special tour while they tuned up. As the first notes were played, I felt that charge popping the hairs on my arms upright. Mark, Drew, and Joe may not heal the entire world, but they were certainly healing all of us in the room. 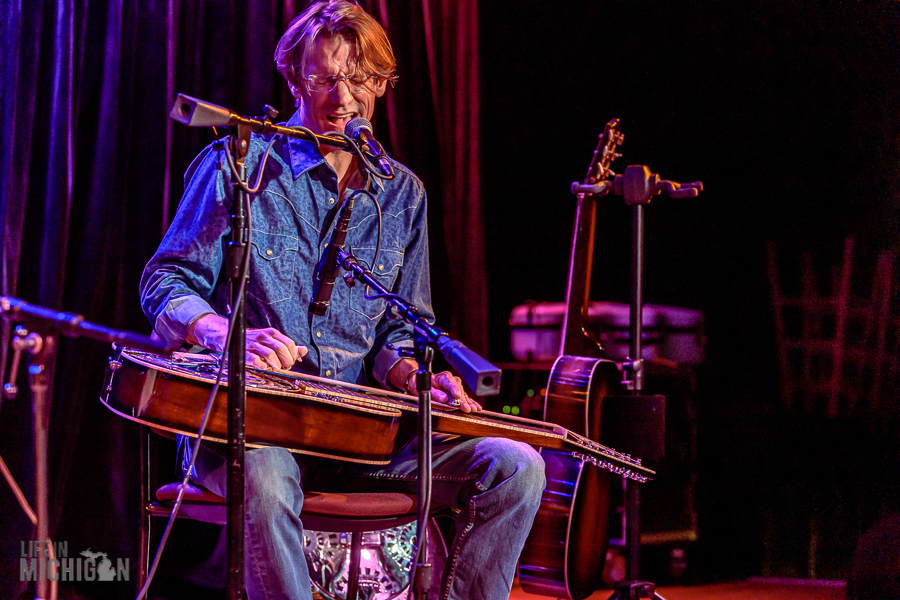 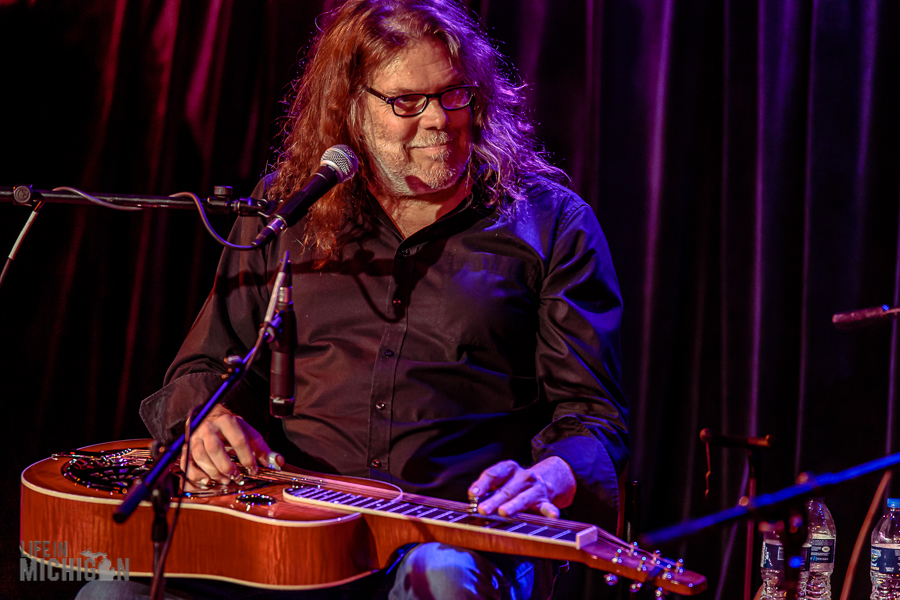 Drew talked a bit about what he enjoys about steel and dobro playing. This art form while having somewhat of a resurgence, is still far from mainstream. It was heartening to see some younger musicians in the audience who hopefully will continue the craft. 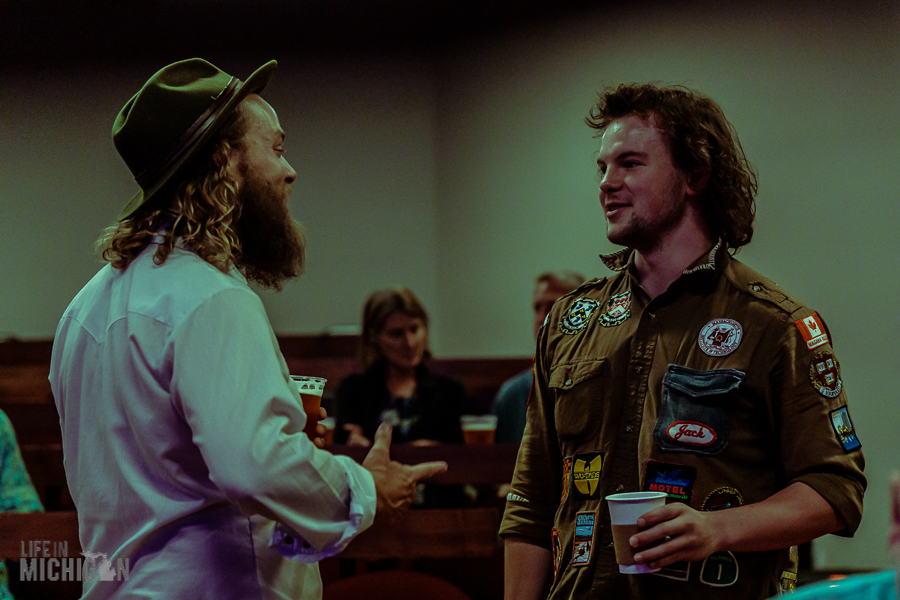 Each musician played songs they have written with the other players trading licks and riffs throughout. From jaunty reels to melodies cascading within a waking dream, they let us experience a piece of their lives through music. 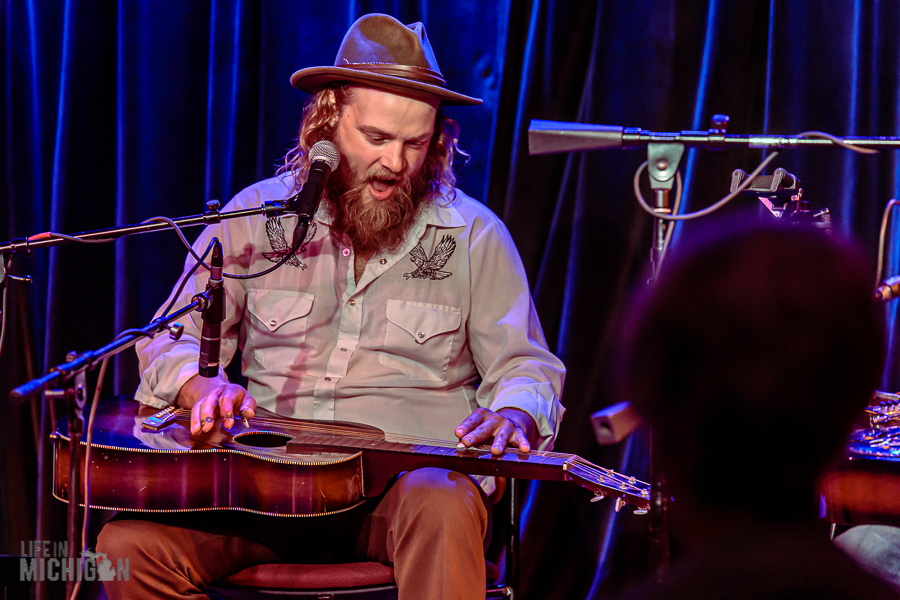 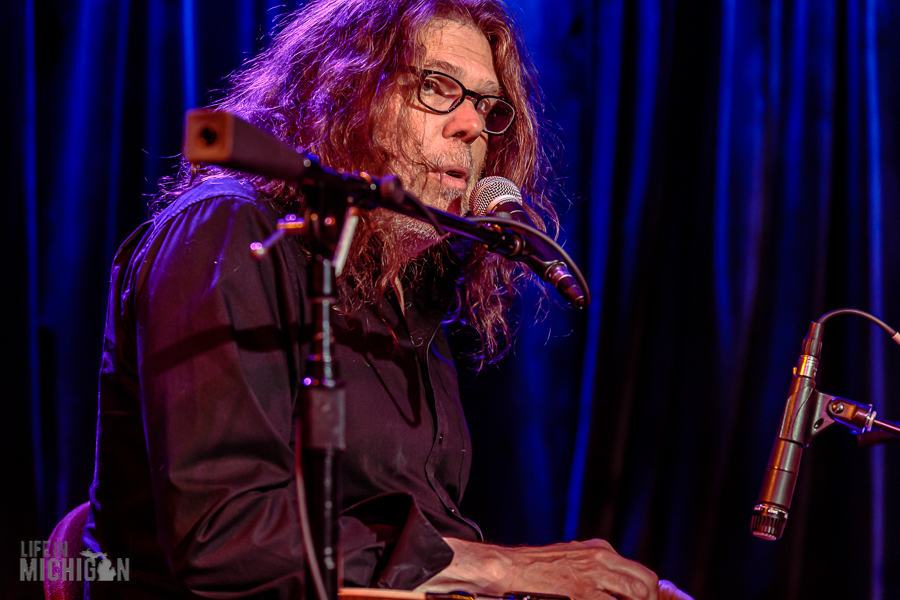 In addition to a selection of Mark, Drew and Joe’s original music, they did a few imaginative covers. The first was “Going to California” by Led Zeppelin. If ever a rock song was made for the dobro it is this one. The other that stuck in my head was “Hungry Heart” by Bruce Springsteen. This song always seemed wistful to me until I heard Mark’s version which is strangely uplifting. 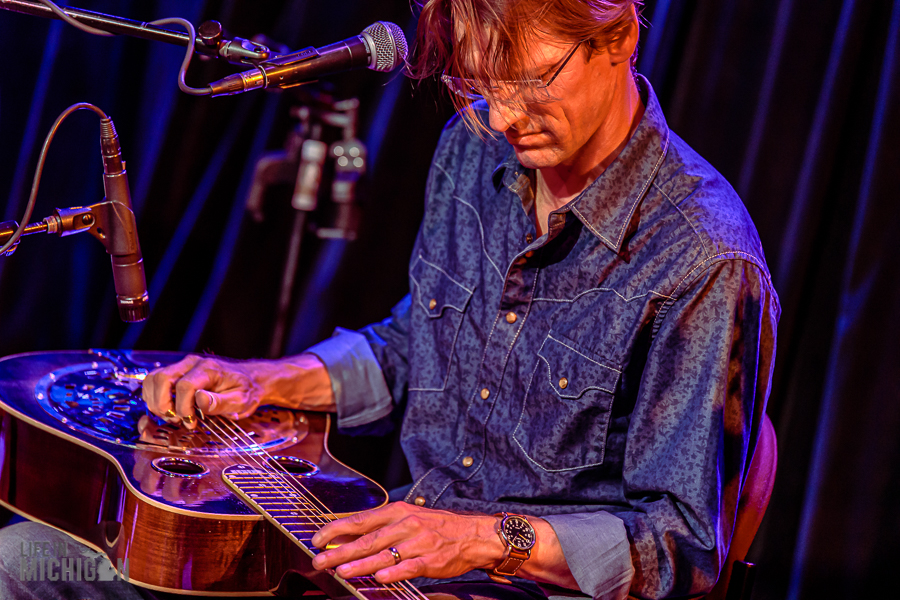 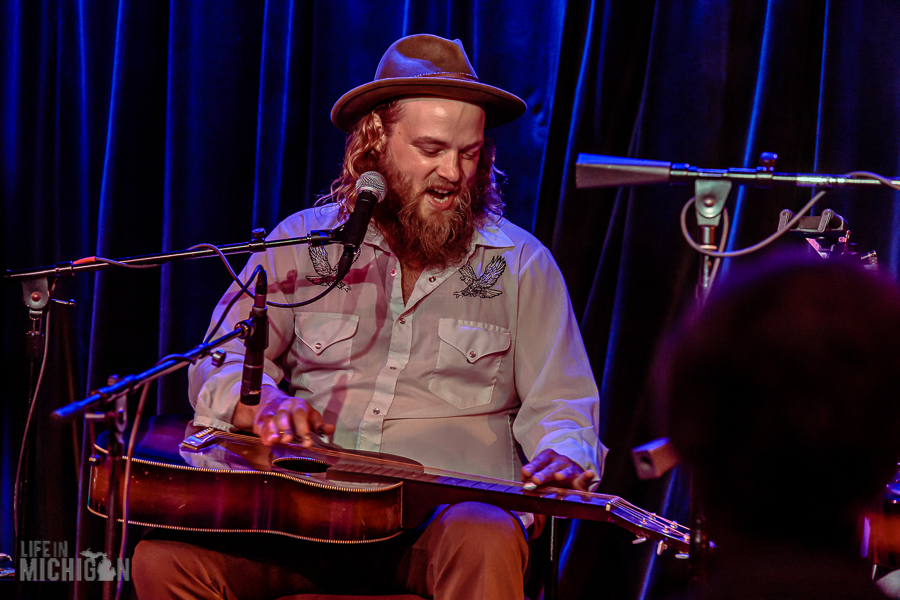 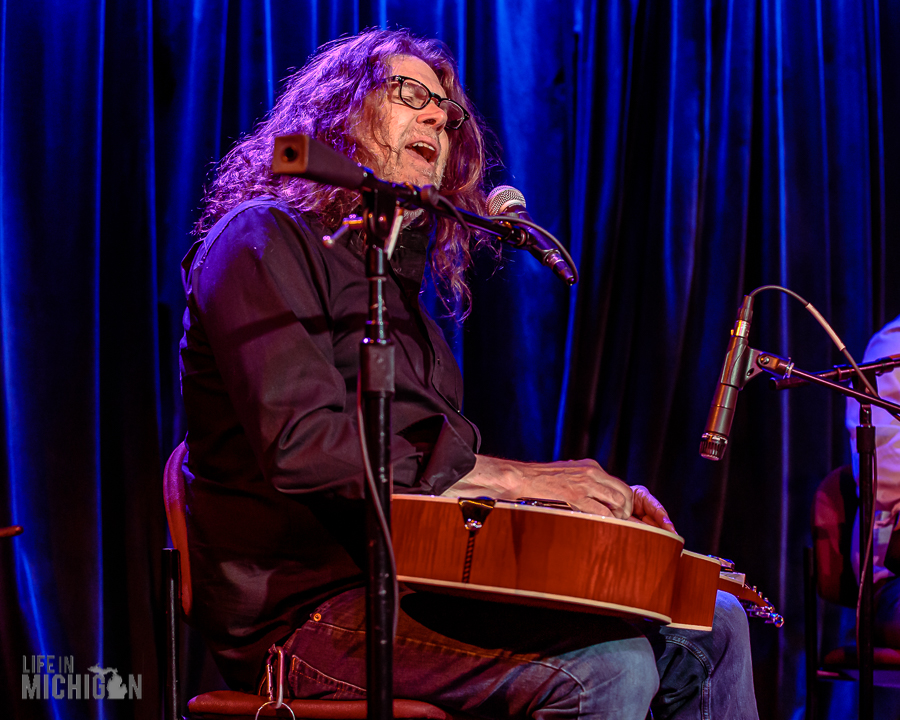 The second set of healing also include some blazing harp playing from Peter “Madcat” Ruth. Peter is a Grammy award winning blues harmonica player. Having him be apart of this special show was a gift. The foursome had us all beaming with glee. 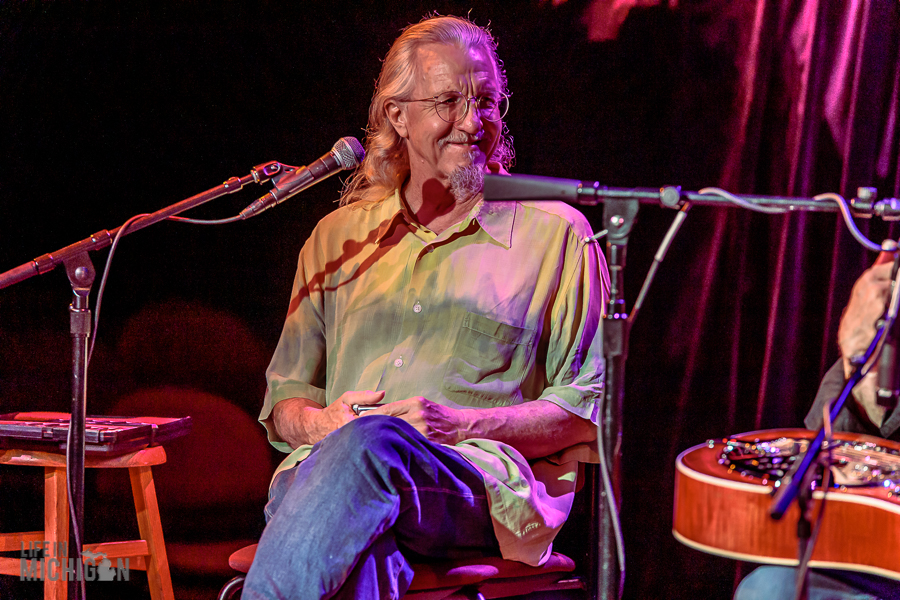 After two sets of entrancing dobro music, everyone in the Ark could feel the restorative power the performance gave us. Mark Lavengood, Drew Howard, and Joe Wilson are amazing musicians and delightful people. Do yourself a favor and seek out these musical healers when they come to visit your town. A nightly dose of healing dobro just might save the world. 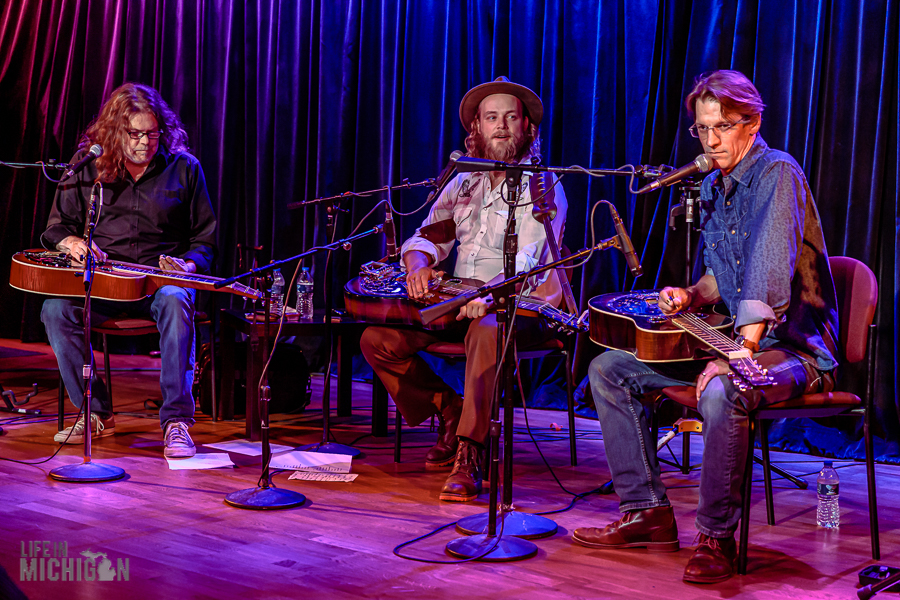 Yes, there are more pictures in our gallery. Please take a look and share on social media. We only ask for photo credit.