I love the AMC series, “Hell on Wheels”.  When I watch it, I’m always flooded with the memory of my father sharing the story of our family  working on the railroad in Kansas in the late 1800’s. Yes I realize the AMC series is immediately following the Civil war and is a good 10-15 years before the Lewicks were working on the railroad. But imagine your great-grandfather as Cullen Bohannon. Oh my, another reason why I love “Hell on Wheels”.  Emma Lewick Woodin doesn’t star in the series but after watching “Hell on Wheels” you can almost imagine her life as the wife of a Railroad Conductor in late 1800’s.

My father maintained that the shotgun which hung over the fireplace in the house on Grass Lake Road was the gun his grandfather, William, took to Kansas. My cousin Brain shared that his brother Tim had a pistol that he inherited from his parents (Ruth and Reuben). The pistol was rumored to have spent time in Kansas too. It is fairly small, well worn and it looked like it spent a lot of time in overall pockets. But I’m getting ahead of myself, this story is about Emma Lewick Woodin.  Most of her adult life played out on the Western Frontier. She was the only sister of William Gottlieb Lewick (my Great Grandfather) and Andrew and Corneila Lewick’s first child.  I believe that I’ve mentioned before that Andrew was a scoundrel. You can read his story here.

William Lewick’s sister was a mystery until a postcard from Temple, Texas addressed to Mrs. C. Lewick was found in Ruth’s postcard collection. (Martha and I recently scanned many of these postcards to share with the world or maybe just a few bored family members.) I held up the Temple, Texas postcard and asked Martha, “Cornelia’s daughter lived in Temple, Texas?” She said, “I don’t know but here is a card to Ruth and it addresses her as Dear Niece and is signed Aunt Emma.” It was like finding a needle in a haystack, we’d found William’s sister!  But no last name.

The note on this postcard cracks me up every time I read it:

Dear Mother, Has that pattern you sent me any collar or cuff to it — you did not send any if it has please send it and tell me how to finish it off. Will write soon. 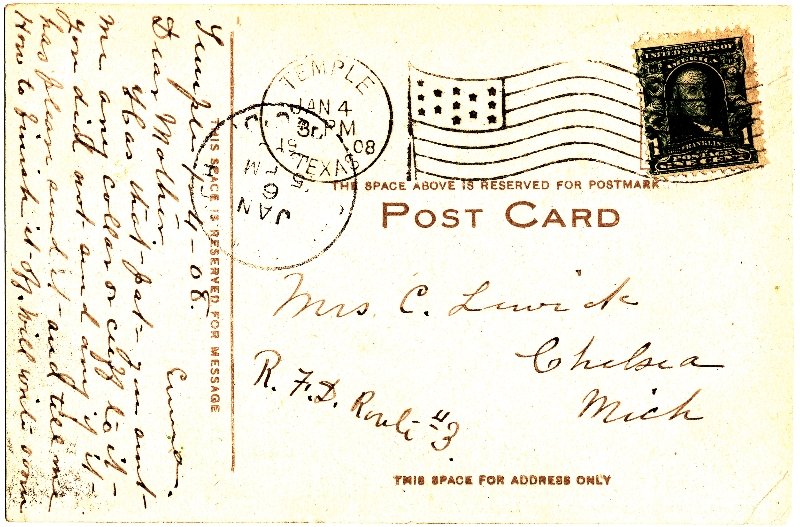 You can hear the annoyance in Emma’s voice. Her mother, Cornelia, an accomplished dressmaker had sent her an incomplete pattern. It has occurred to me that perhaps Cornelia was starting a new fashion craze. Clearly Emma didn’t care for the style.

Where the confusion started…

On the 1860 Michigan Census, Cornelia listed a daughter named Eliza, age 7. She also listed an Andrew Lewick age 42. Both of these entries have caused much confusion. Her husband Andrew Lewick, was born in 1829 so he would have been 31 not 42.  And he’d already set sail for California. Was there a second Andrew or was Cornelia just fibbing a little? It would have been nice if she’d listed her daughter as Emma and not Eliza. That has caused much consternation for my sister Mary and cousin Brian. Names were a fluid thing I guess. 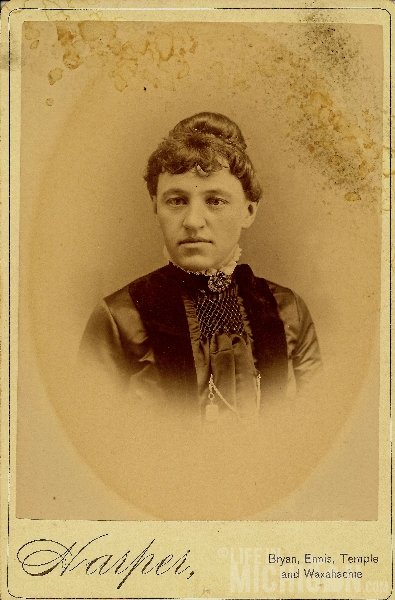 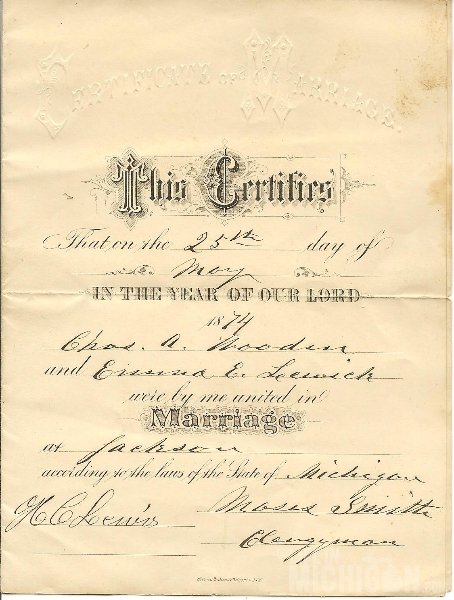 Lucy, Charle’s mother was from Canada.Why is this important? Well, Mary Stevenson, William Lewick’s wife was also from Canada. And on the 1860 Michigan census, the Woodins listed an Edo Stephenson as living with them. (Stephenson and Stevenson are interchangeable, sort like Lewick and Luick). This was a very small community. In 1855, the total population of the Chelsea area was 200. So perhaps this is how William met his wife, Mary Elizabeth Stephenson. Remember, Emma is 7 years older than her brother William. By 1880 Emma and Charles Woodin were living in Topeka, Kansas.

Emma and Charles were living in Temple, Texas with their adopted son Huh Newland for the 1900 Census. Emma sent this postcard to her mother, Cornelia in 1908. 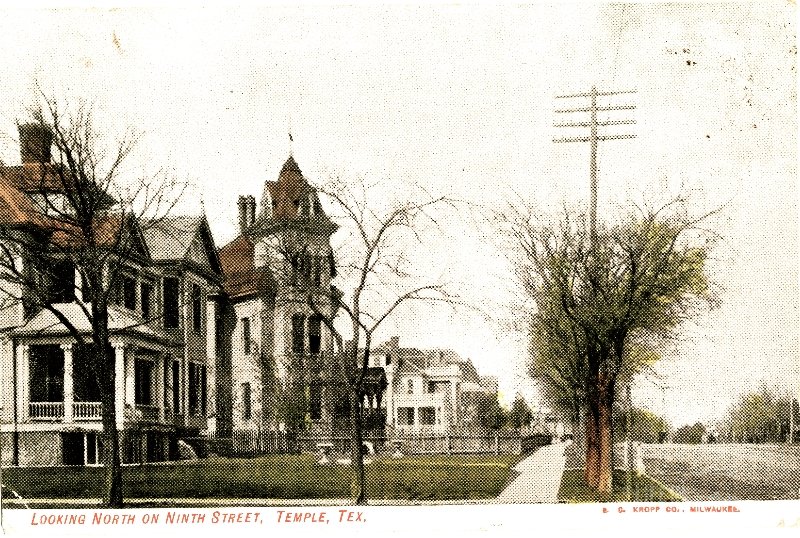 Emma’s house probably looked very similar to these houses. She and Charles were listed in the City Directory as living on South 11th Street and this is a picture of Ninth Street. 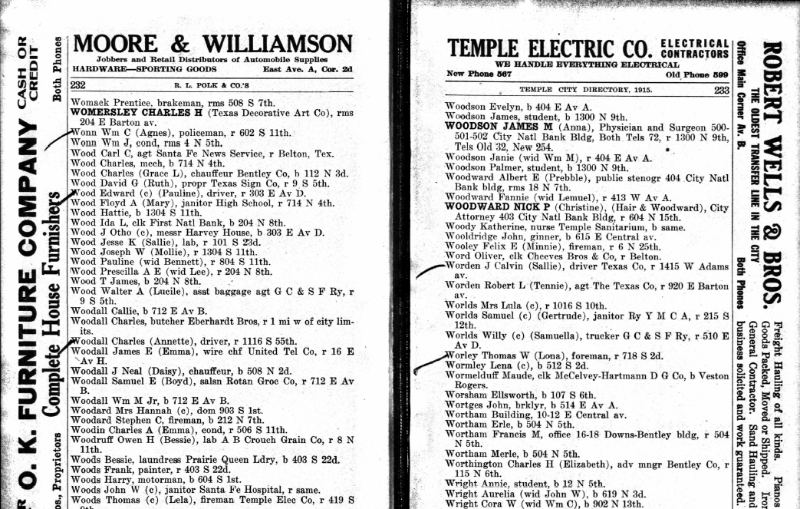 Charles died before the 1920 census but Emma lived the rest of her life in Temple, Texas with her son Hugh. She was 83 when she died.

This is just the beginning of the Lewick Family’s Western mini-series. William Lewick, Emma Woodin’s brother, also traveled west and worked on the railroad. There is much folklore surrounding his Western tale. We would all love to know the real reason why he went West. We’ll never truly know the catalyst for the trip but Mary and Brian are busy looking details to support our theory and I hope to share it very soon.

As always, this post would not have been possible without the help of many individuals.

Special thanks to Brian, Mary and Martha for dusting off pictures and sharing stories.