We hit the ground running to explore the magical city of Edinburgh with our new friend Miles from Guided Scotland. 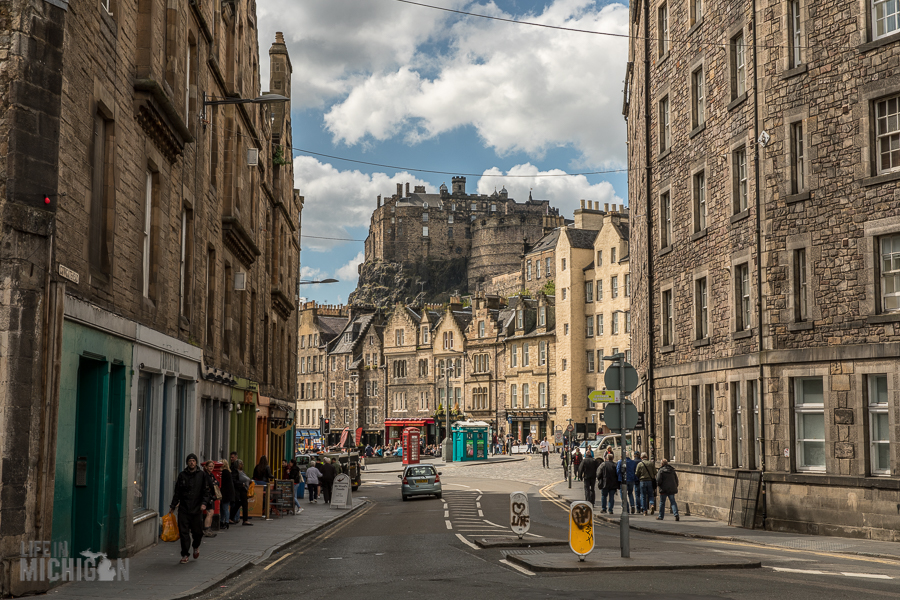 You can certainly find any number of online or printed guides to show you around the majestic and spellbinding capital of Scotland; Edinburgh. We did this ourselves in 2012 during our first Scottish adventure. You know that one where I bought a kilt.

That was then and this is now. Having landed Murray and company from Kingdom Guides for our hiking explorations in Scotland, we figured a guide in Edinburgh would make the city come alive. We asked Murray if he had any suggestions and he got us in touch with Miles from Guided Scotland. Within a couple of emails regarding what we had in mind, Miles had a fantastic itinerary setup which would take us through both Old and New towns, explore some closes (kind of like an alley), and take us up to see Edinburgh Castle. Check out this map we created which touches on some of the highlights of the tour:

Hitting the Ground Running in Edinburgh

Given that our time in Edinburgh consisted of the day we landed in Edinburgh and our last day before heading home, we decided to meet up with Miles from Guided Scotland as our first event of our Scotland 2018 vacation. 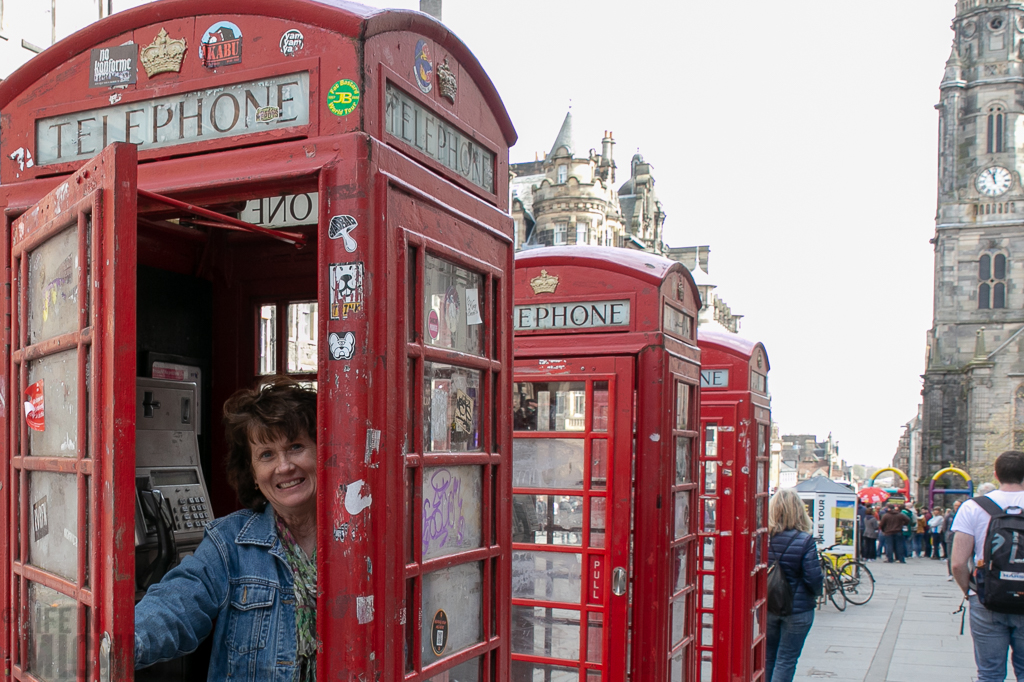 We left Michigan at around 11 am and found ourselves in Edinburgh the next day (May 1st) at about 10 am. We had maybe an hour or so of uncomfortably cramped sleep. The “comfort” upgrade option on the flight was a joke. We checked in and dropped off our luggage at Fraser Inn and Suites which is a wonderful hotel located right across the street from St. Giles Cathedral. The staff were marvelous and the rooms are outstanding. We fueled up with a fantastic brunch at Deacon’s House Café, then checked out the street performers on the Royal Mile while waiting for our rendezvous time with Miles. 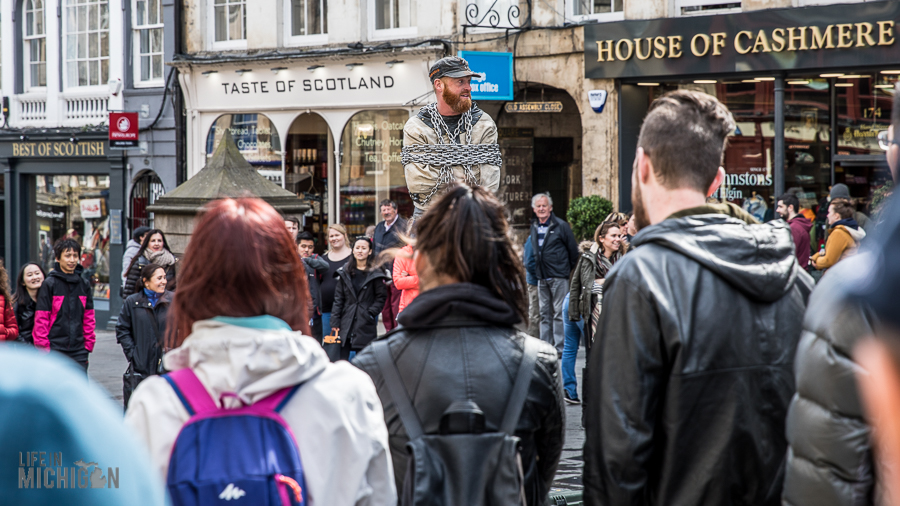 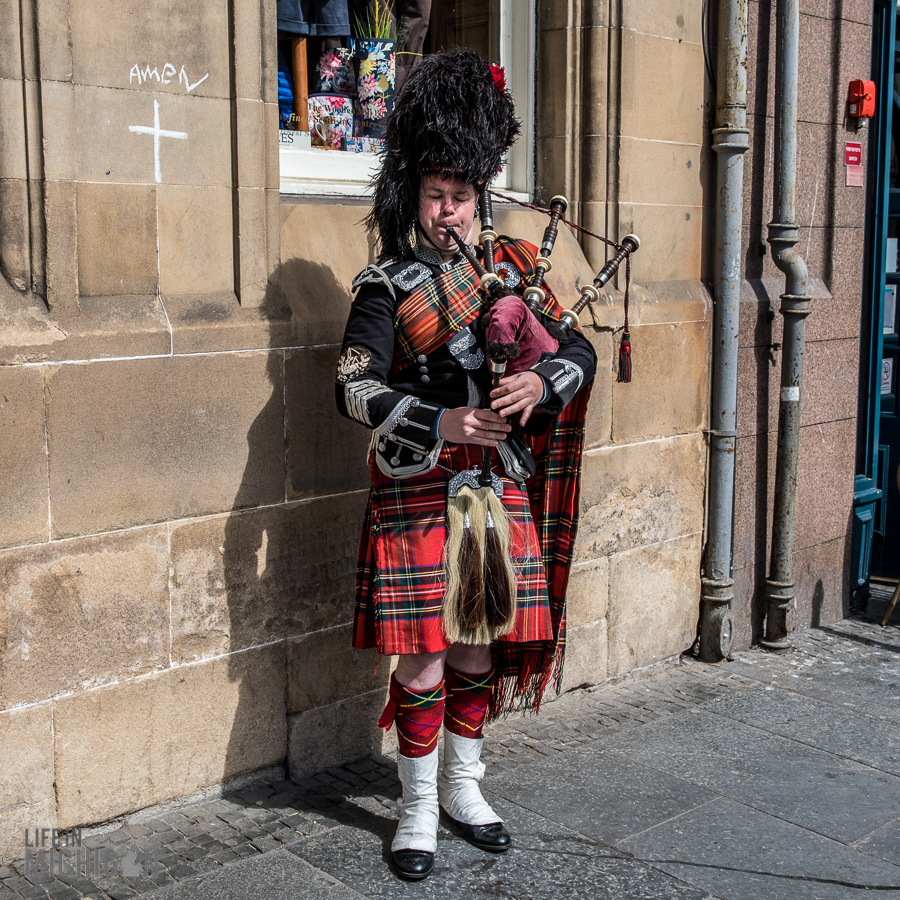 At 1pm sharp, we met up with Miles. He was all smiles upon greeting us just outside St. Giles. He was quite impressed that we all seemed pretty chipper given the prior day of travel. Little did Miles know that we were amped up on huge cups of coffee from the Deacon House Café. 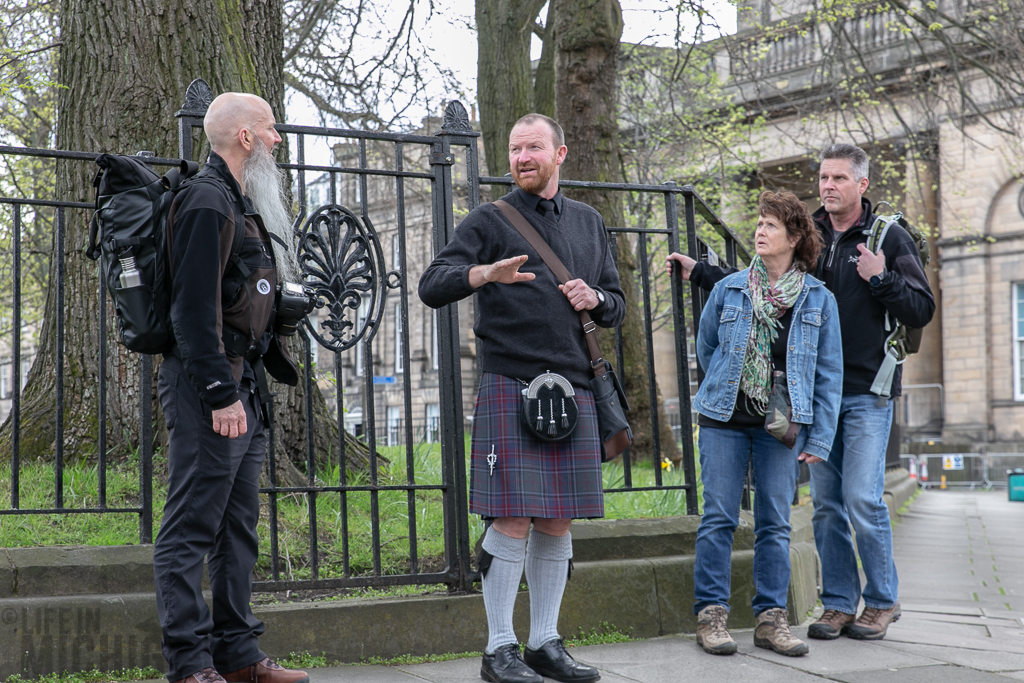 Our first stop on our tour of Edinburgh was St. Giles Cathedral located on the Royal Mile just steps from the Hotel Fraser. The church has been a fixture in Edinburgh for 900 years. As we marveled at the gothic architecture, Miles gave us a bit of history regarding the Scottish Reformation which led to Scotland’s conversion to Protestantism. This movement was led by John Knox who was quite a firebrand and eventually became the minister at St. Giles. 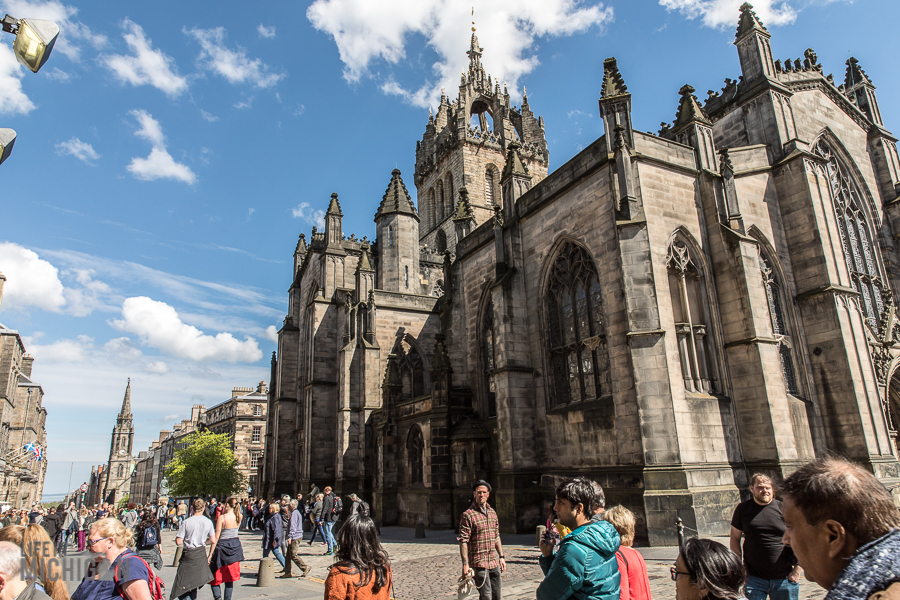 As grand as the exterior of St. Giles may be, the interior is jaw dropping. A row of giant pillars, vaulted ceilings, and tons of marvelous stained glass are a feast for the eyes. Miles showed us an original copy of the National Covenant which was a protest of Charles I and the changes he wanted to make to the Church of Scotland. 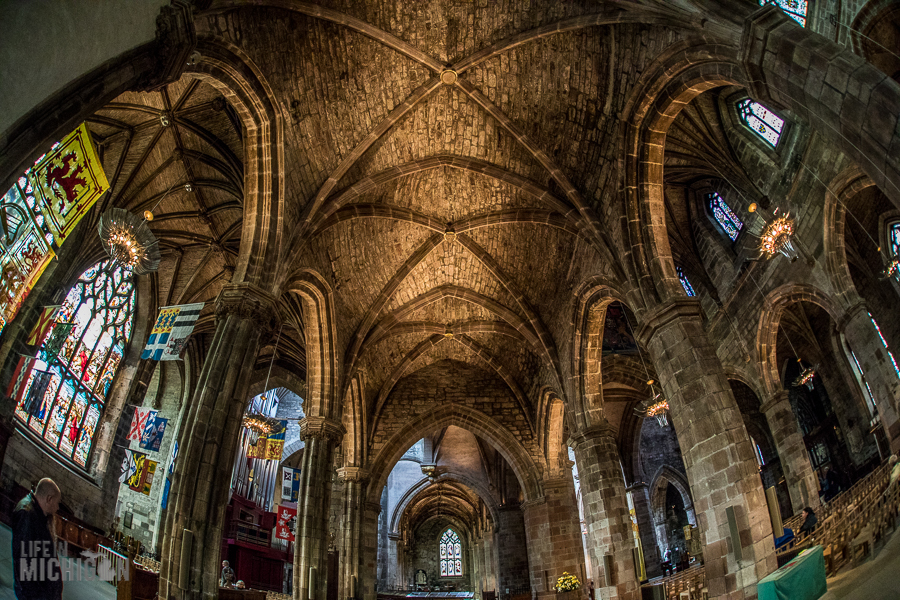 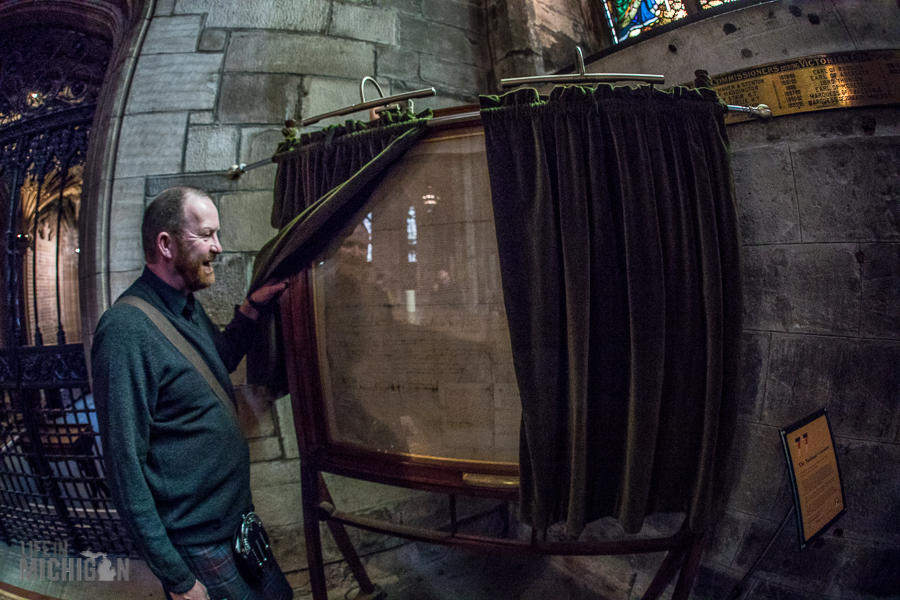 This led to the story of James Graham, 1st Marquis of Montrose and Archibald, 1st Marquis of Argyll. Both men signed the National Covenant, yet Montrose didn’t trust Argyll and they fought each other in the Bishop Wars with Argyll representing the Covenanters (folks against changes to the church) and Montrose fighting for the King (Charles I). Montrose was captured, hung, and his head was mounted outside the church at the Tollbooth and his limbs scattered about the countryside as a warning. Years later, Argyll was charged with treason, hung, and had his head put up on a spike at the Tolbooth. Eventually, both men, would be brought back to St. Giles and placed in monuments inside the church. It is funny how enemies are eventually joined together in death. 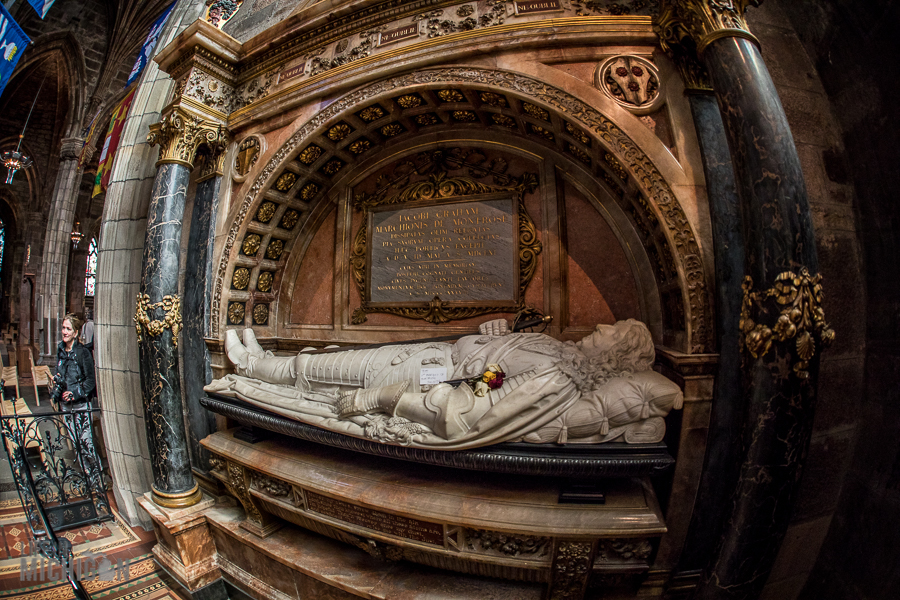 Just outside the cathedral is the Heart of Midlothian. The heart marks the former doorway into a prison. The tradition is to spit on the heart for luck, which I did. You never know when you need a bit of luck. 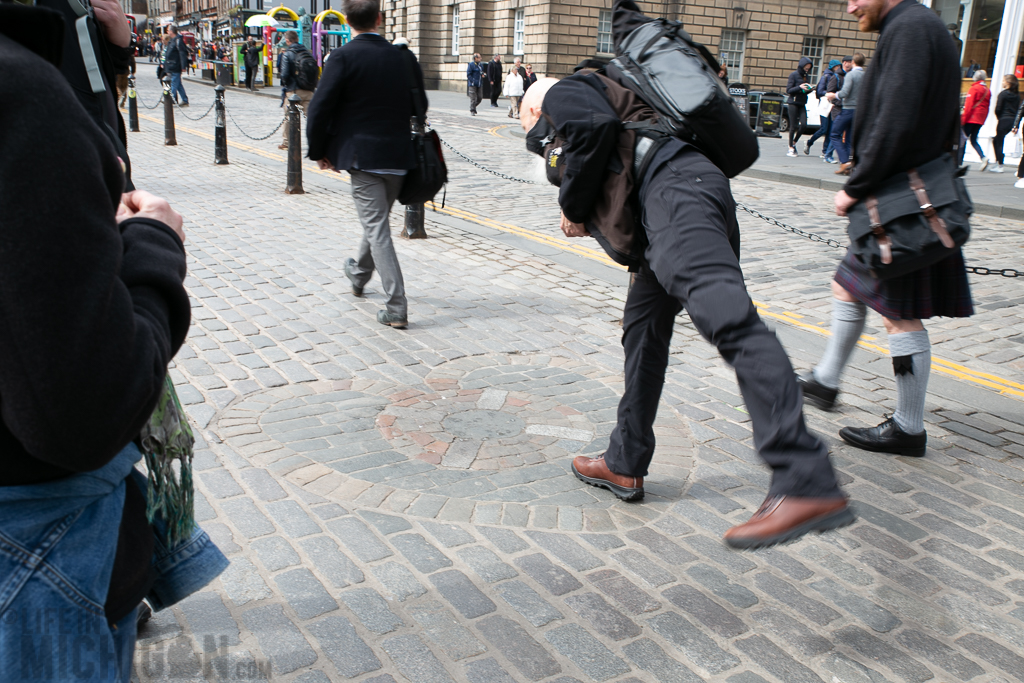 Wandering in the New Town

Miles led us through the Lady Stairs Close which is home to the Scottish Writers Museum. Here they celebrate the great historical writing of Sir Walter Scott, the amazing fiction of Robert Lewis Stevenson, and the sumptuous poetry of Robert Burns. In case you are curious what a close is, think of it as an alley only better. This one opens into the courtyard before shuttling you down the hill toward New Town. 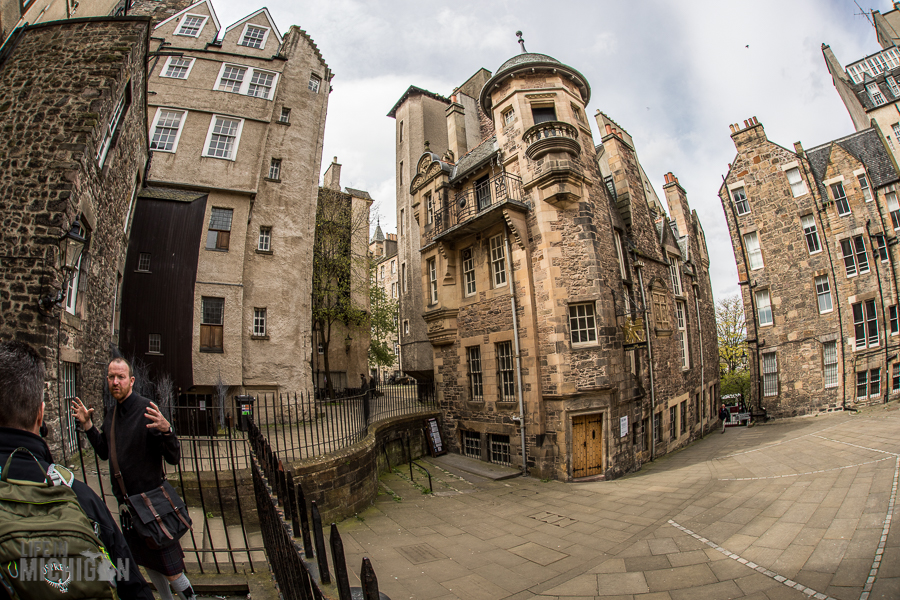 It turns out New Town really isn’t all that “new”. Miles explained that it is 250 years old. New Town came about as Edinburgh was bursting at the seams and the Age of Enlightenment drove demand up for space to house a growing population of merchants and professionals. 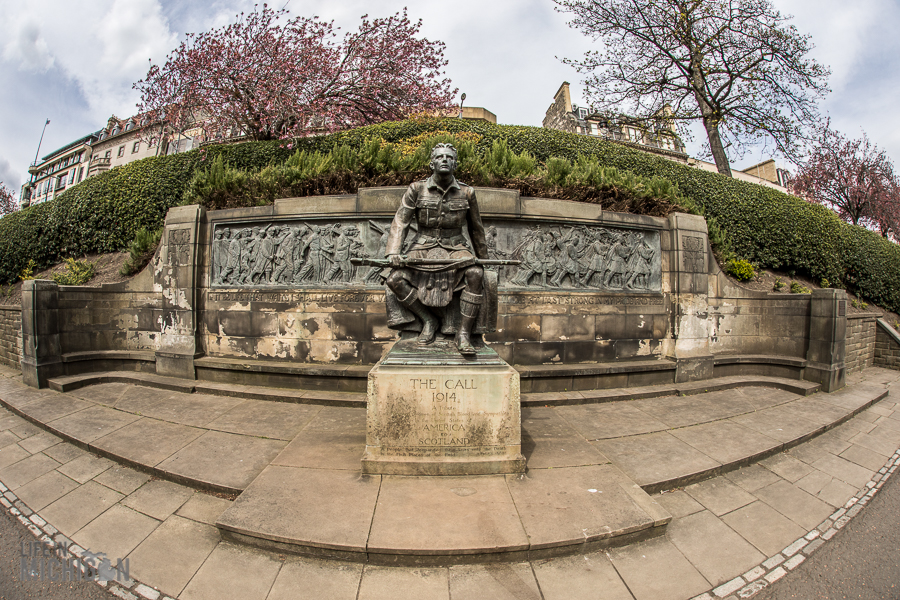 We strolled along Charlotte Square and took in the architecture from the outside of the Georgian House. It turns out that the Scottish Prime Minister’s house is right next store. We didn’t knock to see if she was home for tea. 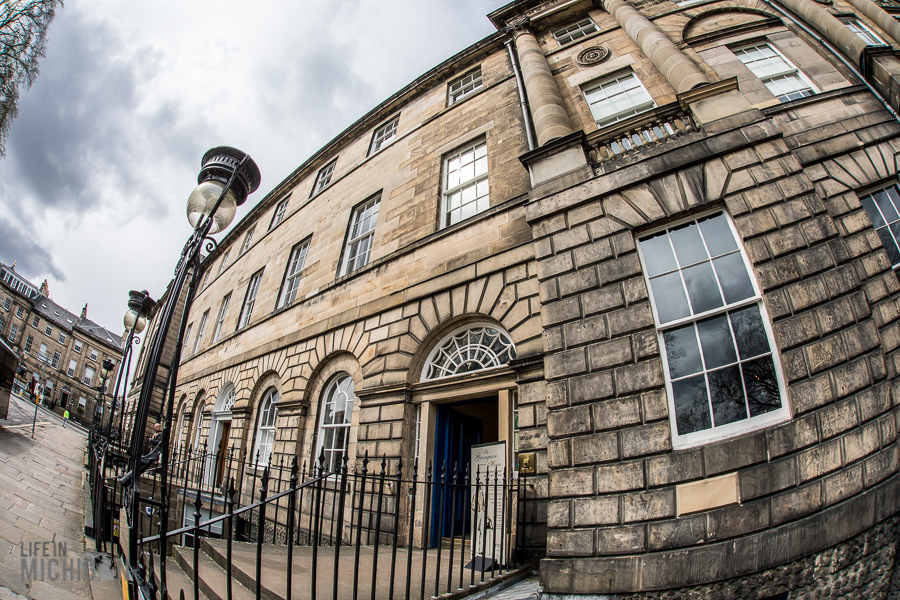 Miles took us down George Street which used to be the financial hub and is now full of swanky shops. He then led us across St. Andrews Square to the Dundas House. Today, Dundas house is home to the Royal Bank of Scotland. It was originally supposed to be the site of a church, but Sir Lawrence Dundas thought it should be the spot for his villa. Looking around, you can only imagine the wealth and pompousness of the man who built this “home”. 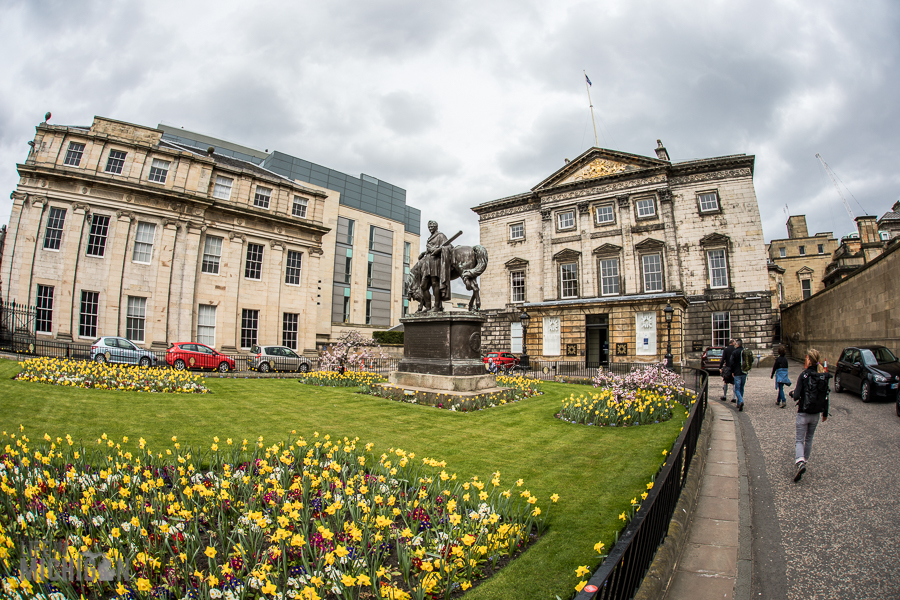 Calton Hill and the Scott Monument

From Dundas House, we headed up to the top of Calton Hill for a peek at the city. Unfortunately, it was a bit overcast and starting to rain lightly, so the photo opportunities were less than imagined. 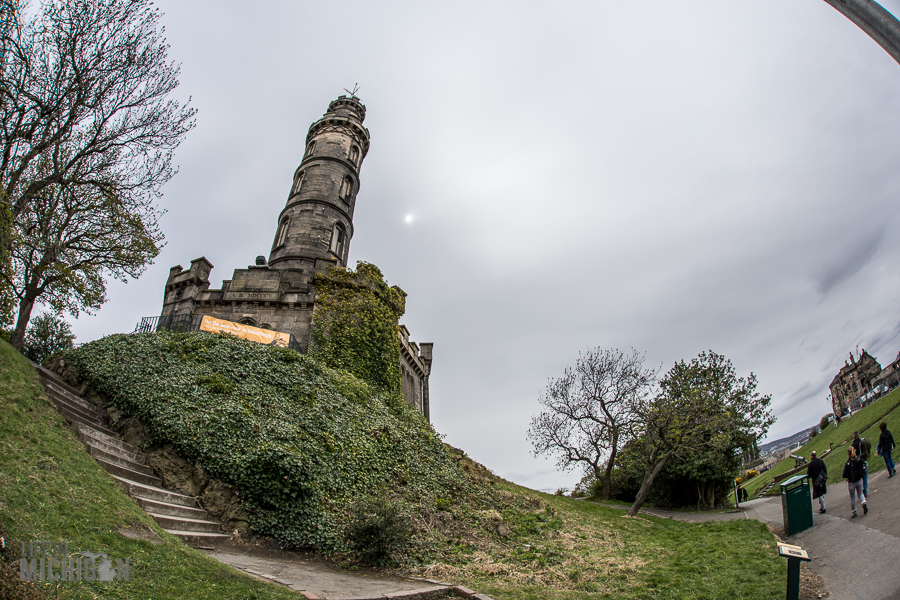 Miles then took us back toward Old Town via the Scott Monument. This imposing gothic structure is a massive monument to the great Sir Walter Scott. This building is huge at over 200 feet high. When Brenda and I visited Edinburgh during our 2012 trip, we climbed the winding staircase to the top. This time around, we marveled from below and chased pigeons. 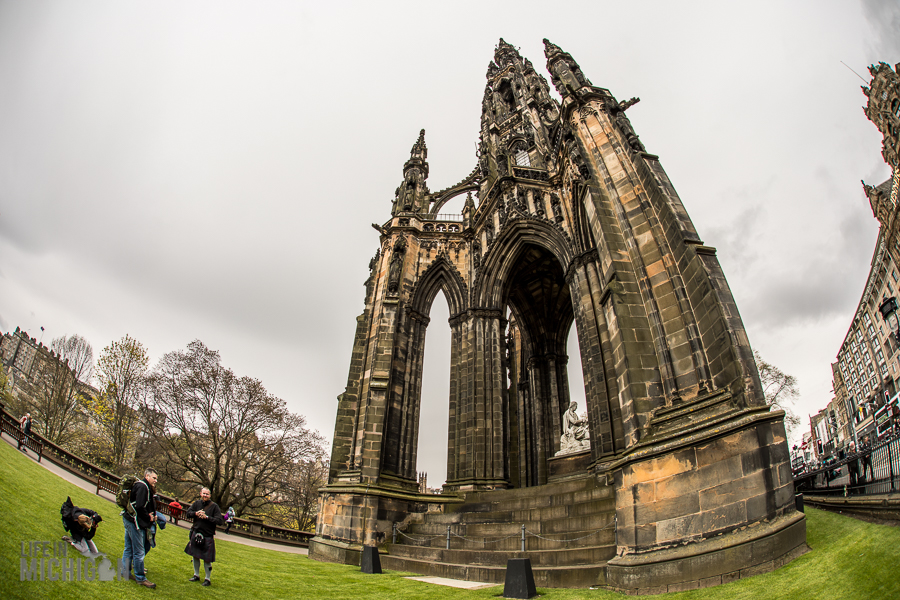 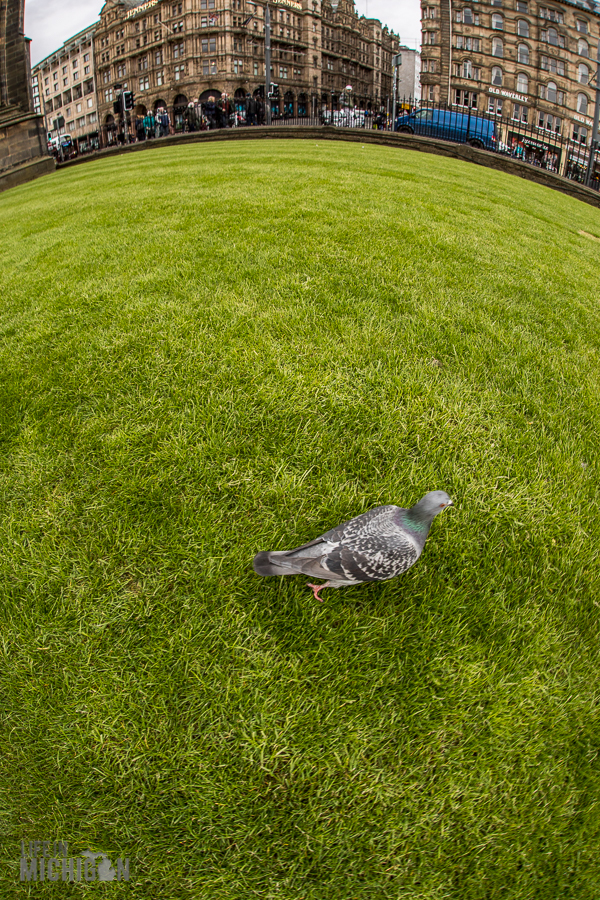 We made our way back into Old Town with a jaunt down the curving beauty of Victoria Street and then to Grass Market. Historically, the area of Grass Market was a gathering place for merchants and conveniently next to Cowgate where they would bring in cows for market. Today this spot is full of cool little pubs and some shops such as The Last Drop or Armstrong’s Vintage. 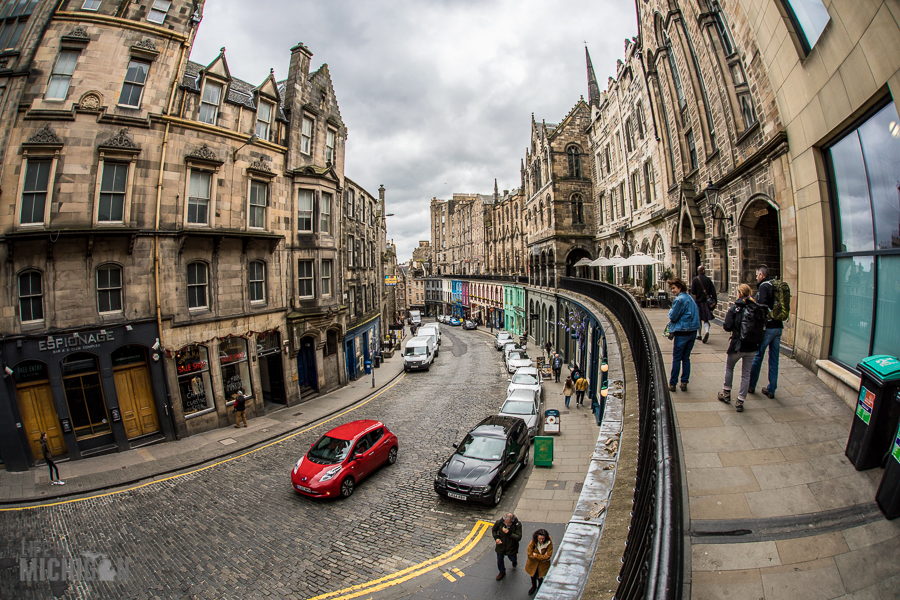 In addition to being a gathering place to sell goods, Grass Market was also the spot of most public executions. Yes, Edinburgh like a lot of old cities has its share of macabre history. There is spot marking where the gallows stood. 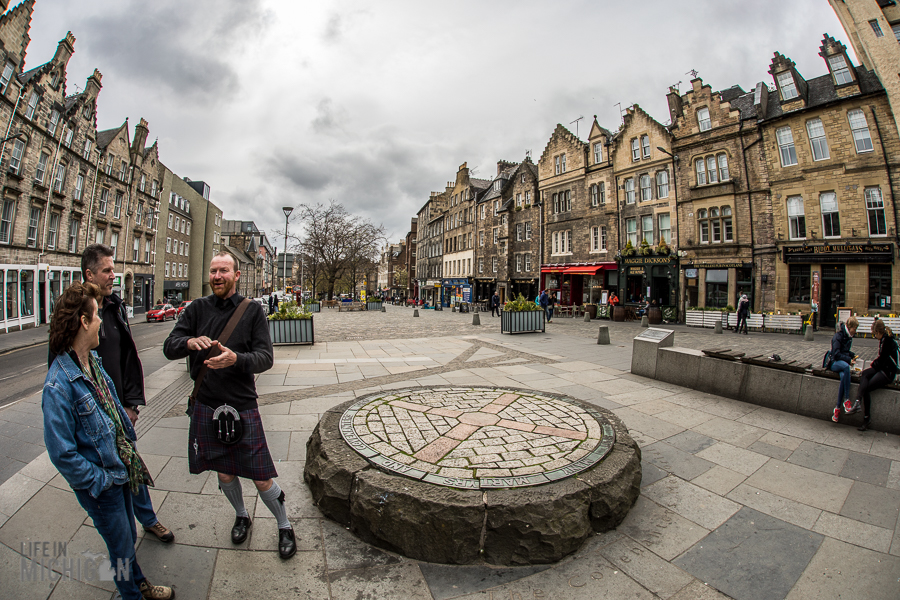 From Grass Market, we made our way over to Greyfriars Kirkyard which is a fascinating old graveyard. We wondered what the metal grates were for and Miles explained that these were used in the 1800’s to prevent grave robbers. Medical science needed research subjects to study anatomy and unscrupulous entrepreneurs where happy to meet the demand. 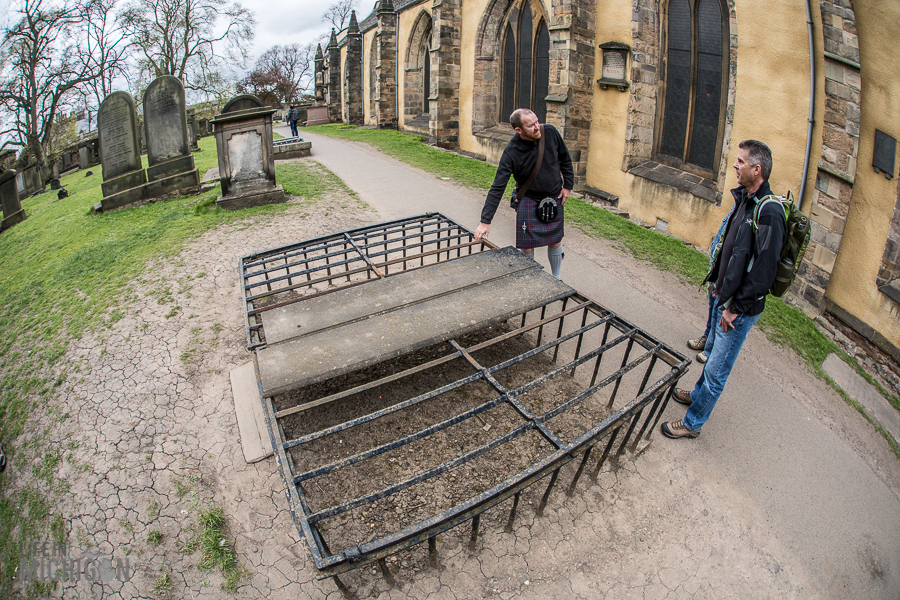 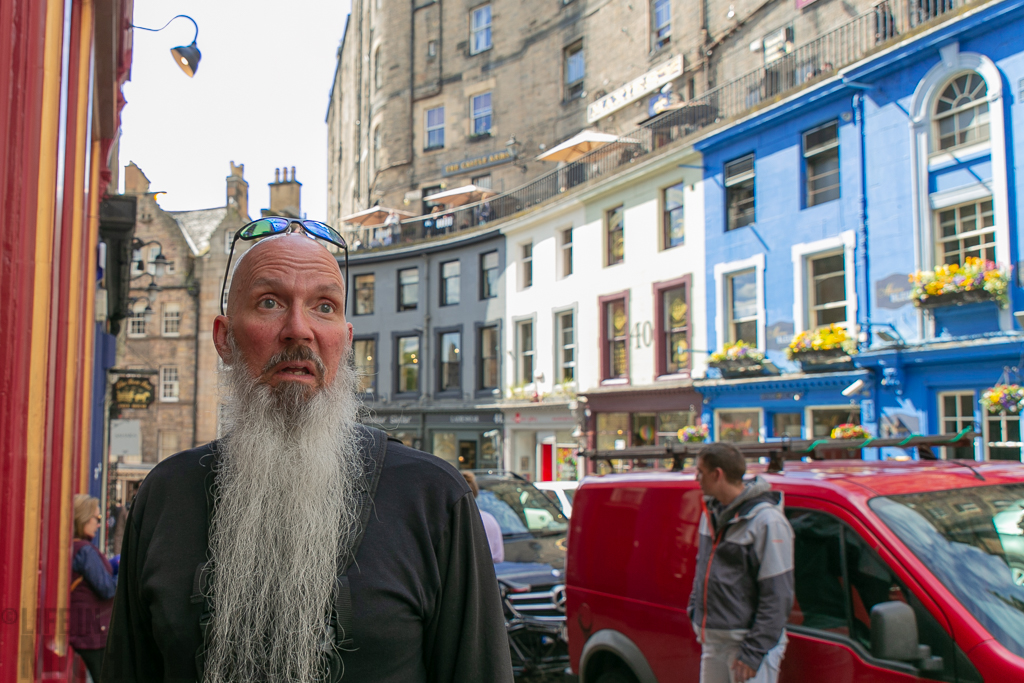 Miles pointed out one other bit of folklore regarding the Greyfriars Kirkyard; the Greyfriars Bobby. The famous story is that the little terrier sat by his master’s grave for 14 years. The Greyfriars even attempted to evict Bobby, but he kept coming back. Eventually, they set him up with a shelter. To this day, people leave sticks at the little dog’s memorial. 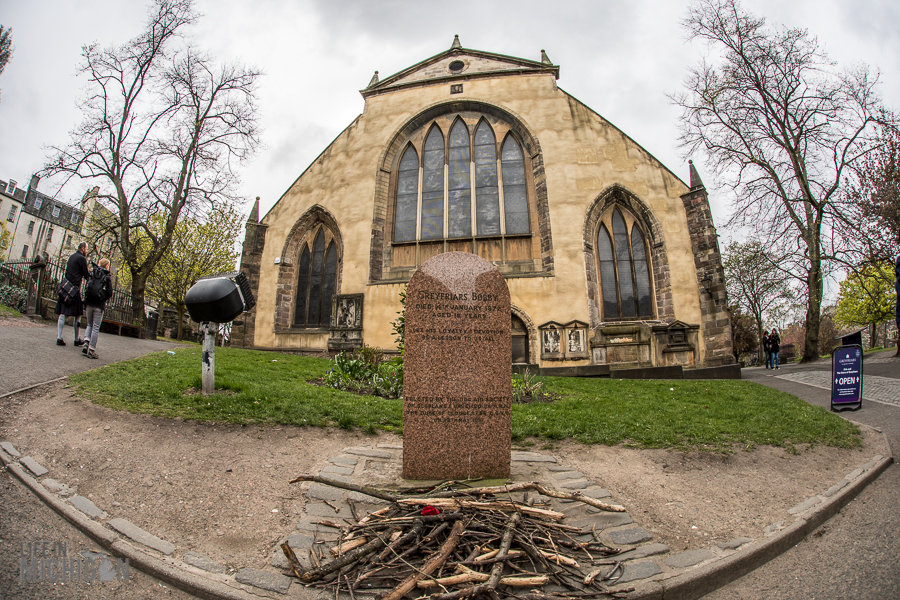 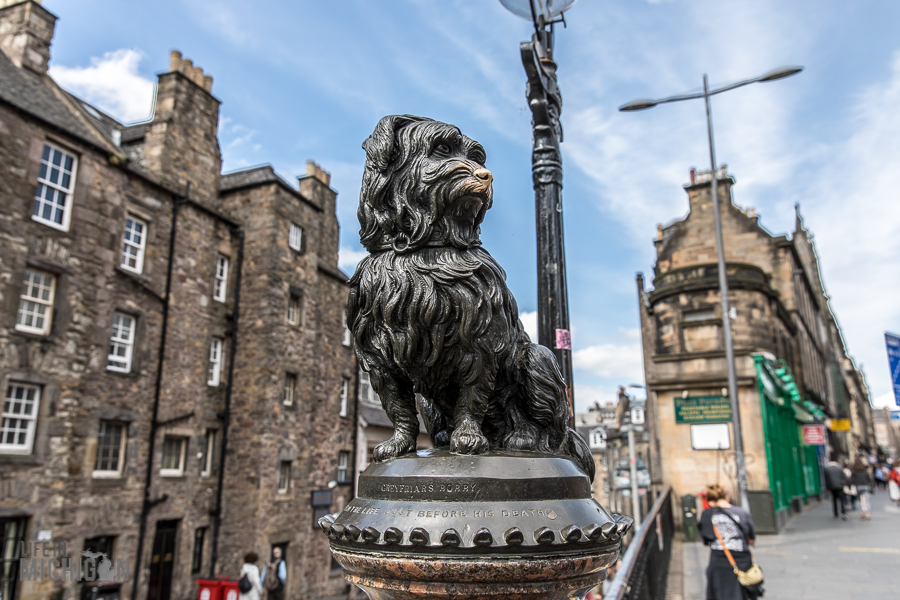 The last leg of our tour with Miles was Edinburgh Castle. This imposing fortress sits at one end of the Royal Mile and dominates the skyline of the city. It was beginning to lightly rain when we headed up to the security check-in just before you enter the castle grounds. We had taken our backpacks with us for the tour as we didn’t want to leave them at the hotel. It turns out that you cannot take a backpack into the castle. Security turned us away. 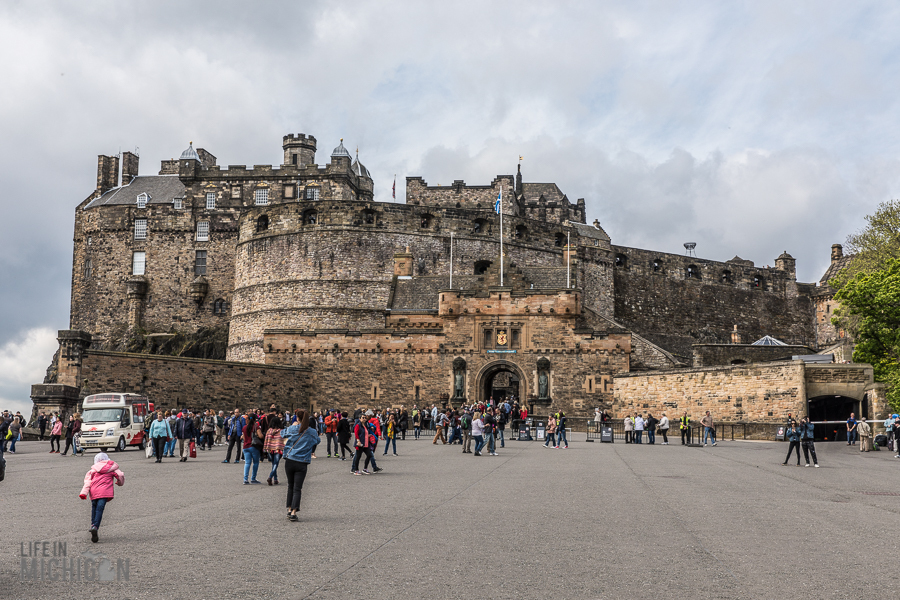 Honestly, this was fine. We had been into the castle before. Given that we had only slept for about 2 hours on the way to Edinburgh from Michigan, we were ok with missing it this time around. 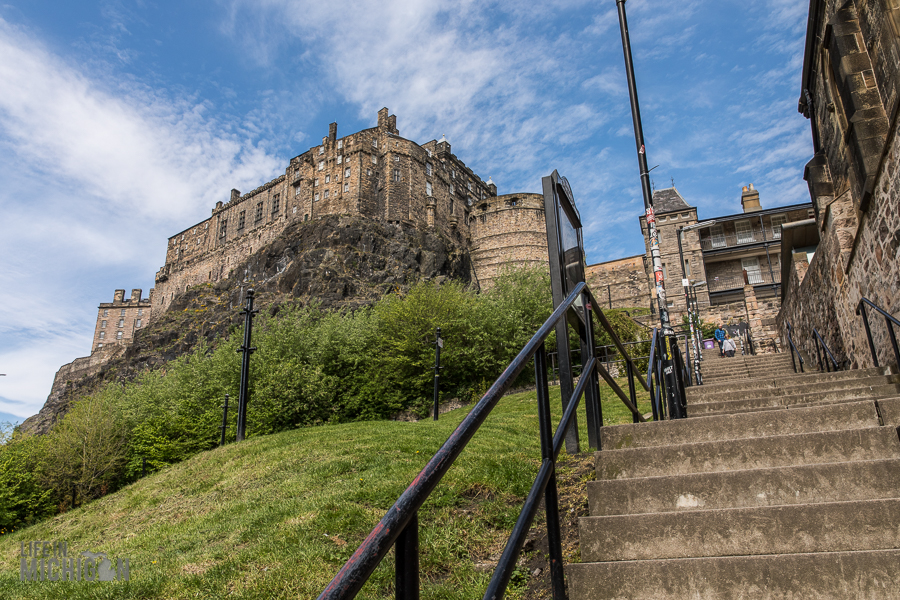 That is a Wrap

We asked Miles for a recommendation for some beer and food. He indicated that the Albanach had plenty of both. Funny thing, Brenda and I had a great time at the Albanach in our previous trip to Scotland. We urged Miles to join us and he was kind enough to stay a bit and chat. We can’t thank Miles and Guided Scotland enough for the fantastic tour of Edinburgh. His local insights and wealth of interesting stories and history made the city come alive. 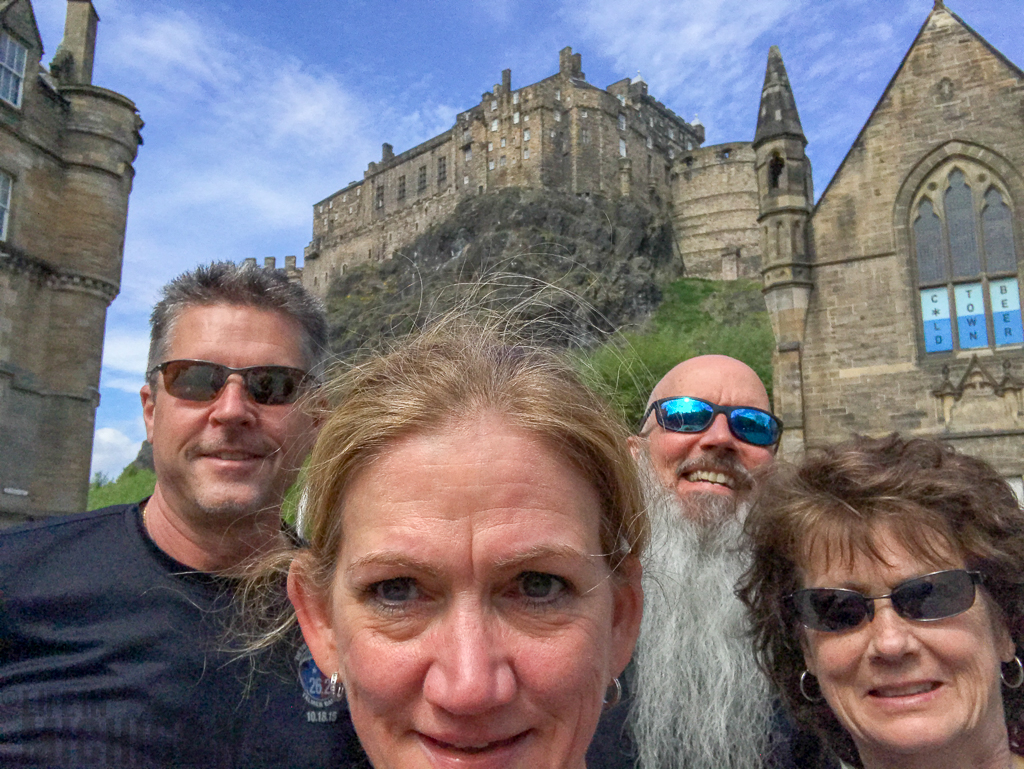 We hope you enjoyed this virtual tour of Edinburgh with us.  If you enjoyed the story, then share it on your favorite social media venue or send it as a link to your friends and family. This is good for everyone!

Check out more pictures in our gallery!

If you haven’t already, don’t forget to check out our other Scotland vacation stories including:

We’d really love it if you’d like our Facebook page. After you subscribe to our newsletter, Life In Michigan posts are delivered directly to your email box. You can also find us on Instagram. Cheer!