The Michigan Brewers Guild presented the 9th Annual Michigan Winter Beer Festival in Grand Rapids, Michigan on Saturday, February 23, 2014. The morning after I found a tiger in our bathroom and an extra person in our room! Kidding about the tiger, but not the extra person. I woke to the sound of a foghorn and I was pretty sure there weren’t any lighthouses near Grand Rapids. The extra person was the maintenance person fixing the noisy, hot water valve that sounded just like a foghorn. Cripes!

(Before you judge me, please note there were 89 Michigan breweries and almost 800 craft beers to try at the beer festival.)

Chuck took hundreds of photos and posted 93 in our gallery. You won’t find all 93 in this post so please visit our gallery to see all the pictures! 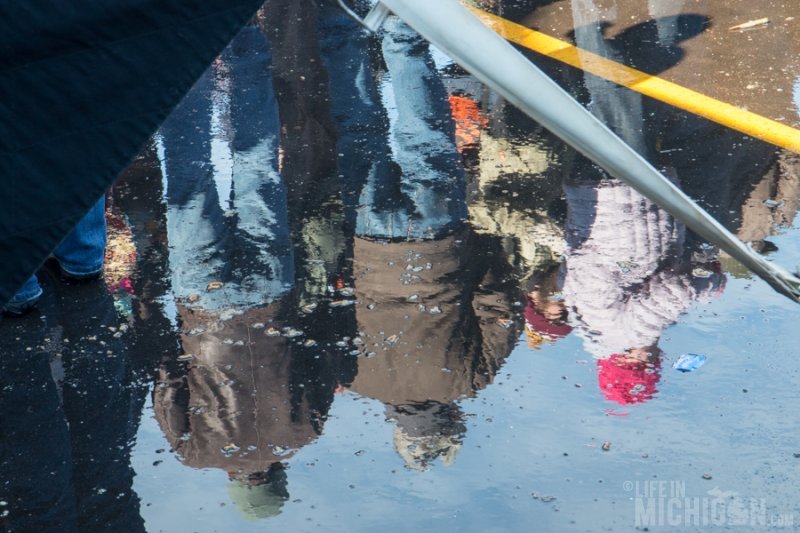 After the maintenance man left, Chuck crawled from under the covers and said, “Look honey here is your cup from the beer festival, you’ve got a 51 North Brewing Co. sticker?”  “No baby that is not my cup,” I adamantly said.  He produced a picture of me getting a Dogway IPA from 51 North Brewing, so clearly it was my cup. Damn! He was right and now that I see the picture I remember the beer. It was Delicious! 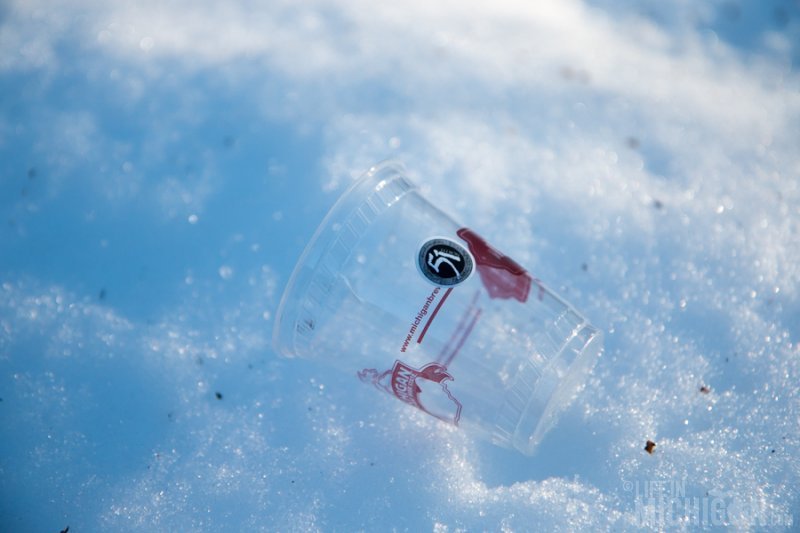 Chuck was full of surprises this morning. “Um, baby, here is  Amy Sherman’s Business card?” I don’t remember her,” I said. “I don’t think you were with me, you were hanging by Schmohz Brewing Co.‘s fire pit.” Oh yes the fire pit (Thank you Schmohz! That was an awesome fire pit!) Ok, back to Amy’s card. “Who is Amy?” Chuck looked at me like I’d lost my mind and said, “You know, she produces the television series Great American Brew Trail.” That I recognized but I couldn’t quite connect the dots yet. 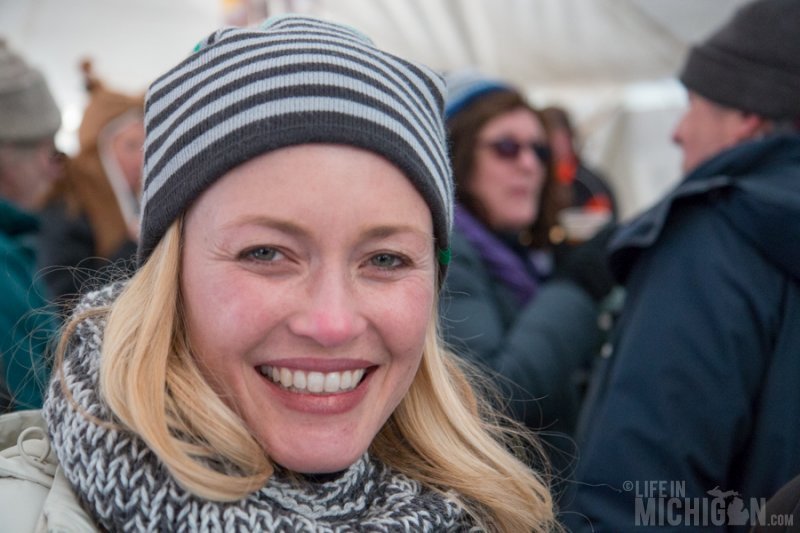 Sorting through the clothes scattered around the room, I found more artifacts from the 2014 Michigan Winter Beer Festival. My new event shirt from Greenbush was still tied to the strap of my purse. Whew! It made it back to the room, clean and in one piece. And I remember Greenbush! “A Sheep in Tall Grass – Scottish Ale” was my first beer of the event and I would have had a second but the lines were too long at Greenbush. Thank goodness we are Michigan Beer Enthusiast members — members get into the event an hour before the doors open. Before moving to the next table, I jumped into the Greenbush merch line and snagged my cool event shirt. I was happy to see our friends from Greenbush working the taps and the merch table. We first met Jen and Justin at the  2013 Dark Horse 4-Elf Party. Apparently Justin was the inspiration for this year’s Winter Beer Festival shirt design. 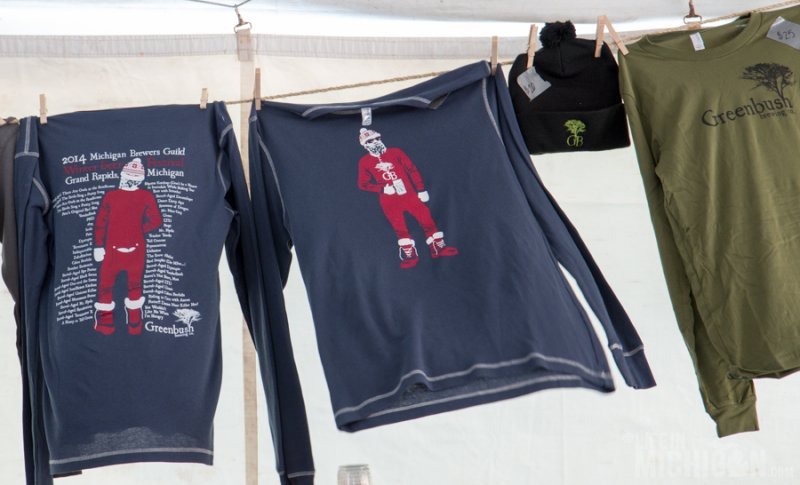 I found this guy at Dark Horse on Sunday morning. He got a Greenbush shirt too! 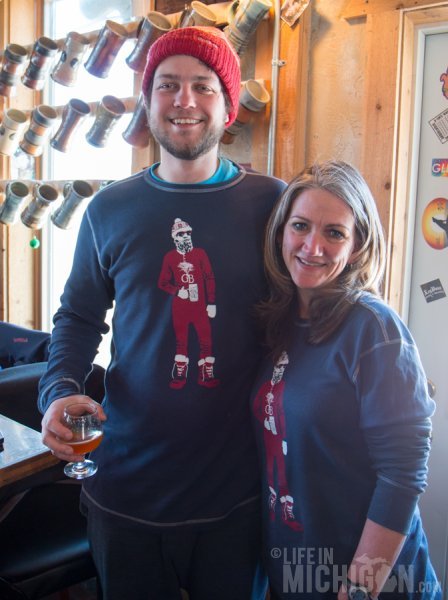 As I was admiring my new shirt, Chuck says “Hey, I just got a message from Marty Dunham.” Now the morning was starting to feel like “Ground Hog Day.” Same conversation, who is Marty and where was I while you were making this new friend? Chuck ignored my question and said, “Marty runs the Marty All Over Michigan Facebook Page.” There was just a hint of, why don’t you know this? 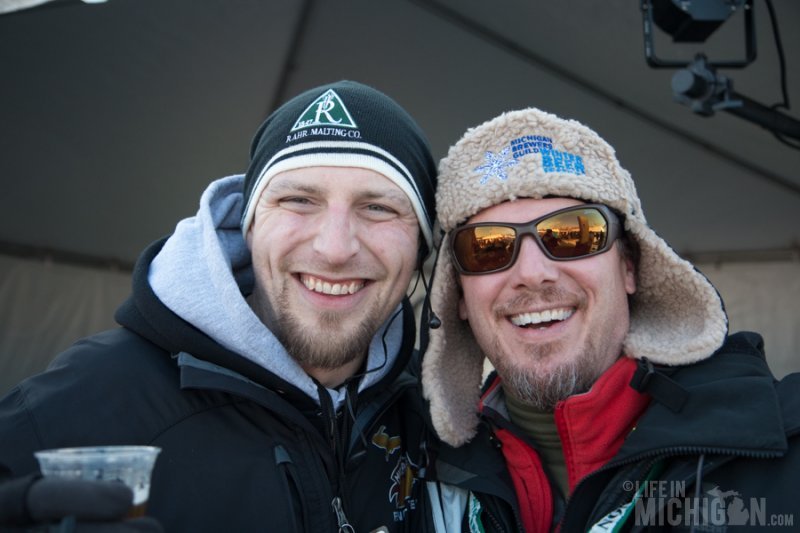 I suspect the “Frozen Dickicle” from Arcadia Brewing caused my memory loss on Saturday. I couldn’t find it on 2014 WBF Program today, but I do have a memory of asking for it. My new friends recommended it. I am ashamed, I don’t know their names and I don’t have a business card, but we have a great picture! 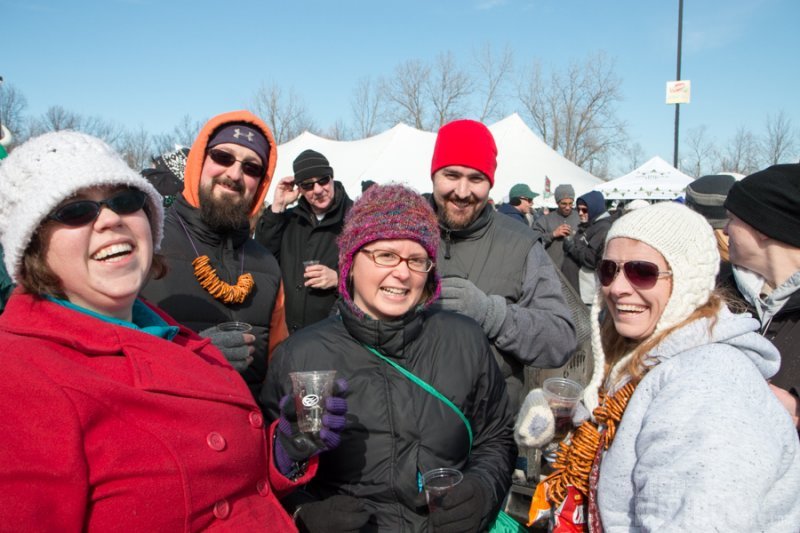 I made lots of new friends by the fire pit. These were our new BEST friends from Ohio. They were out of beer tokens so we gave them more. They are from the UK and love MICHIGAN. Again, I don’t know their names. 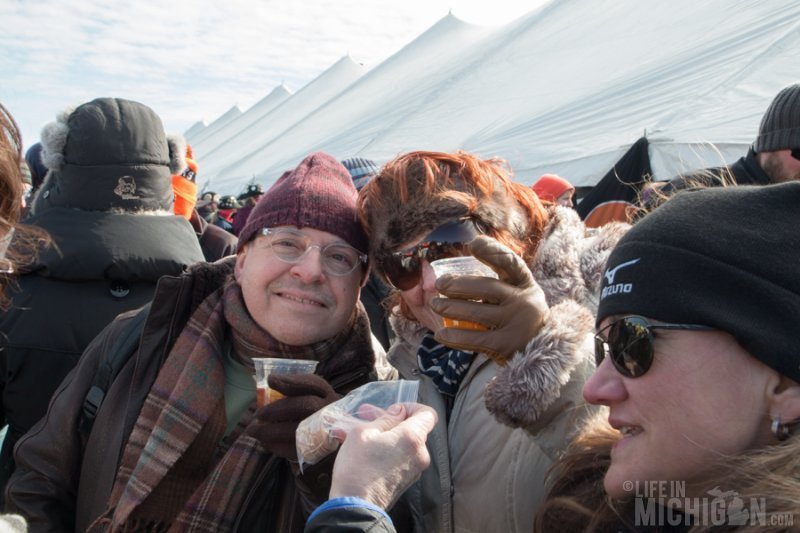 This is what happens when you stand too close to the fire! 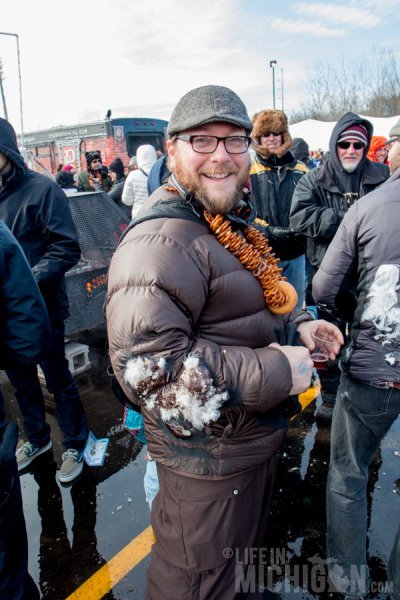 On the ride back to Ann Arbor,  Jeff and Angie helped fill in more of the missing Michigan Winter Beer festival pieces.

It is the year of the Horse! It is a time of fast victories, unexpected adventure, and surprising romance! The Horse Loves Freedom. Perfect for Dark Horse. 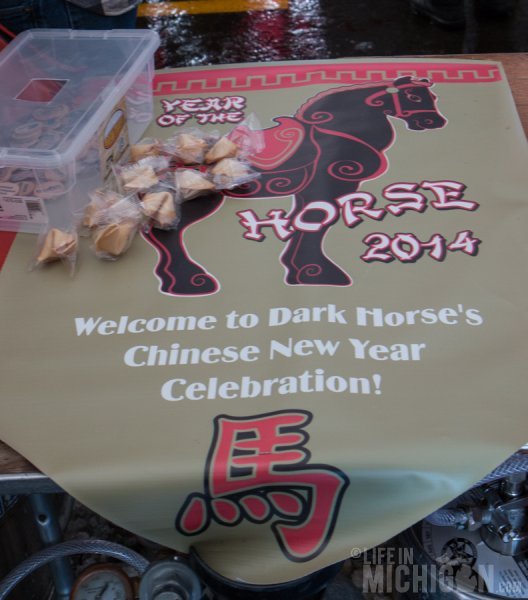 I’m just gonna put it out there. We love Dark Horse — not just the beer, but the whole Dark Horse experience. You won’t find AC/DC music or “Hipsters” in the taproom. (FYI–Chuck had a bad Hipster experience at Founders after the festival. Please don’t get him started on hipsters.)  We had Dark Horse’s Sarsaparill 666 and the Mighty Peach Basil. We love both of these and look forward to having them every chance we get. We were hoping to have Demeter’s Lament — the winner of the Dark Horse Taproom Beer Competition but it wasn’t quite ready to roll for this event. 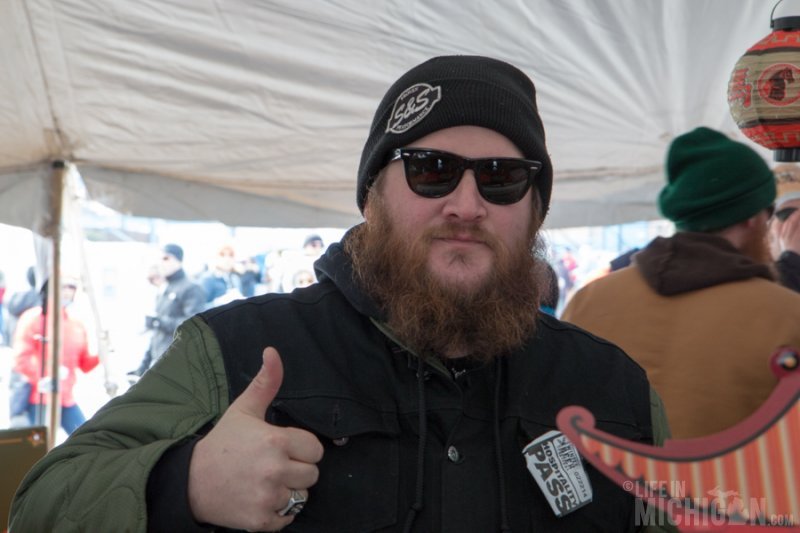 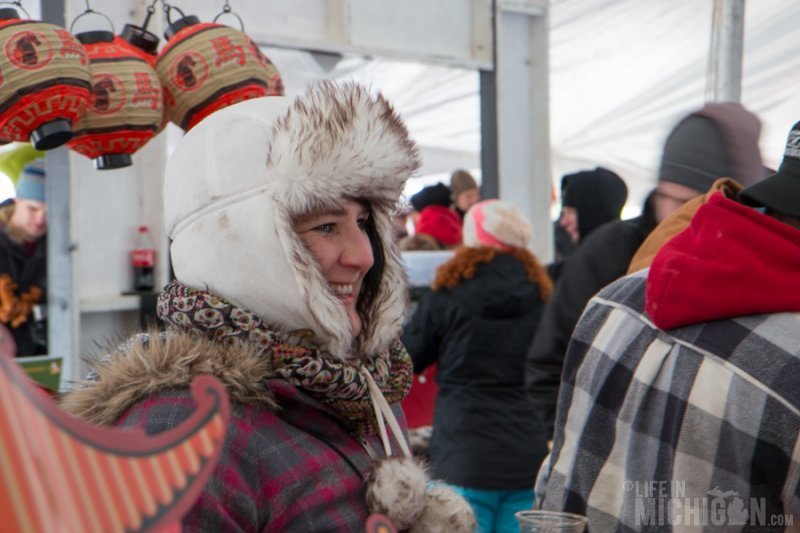 Chucks’s favorite beer was Kuhnhenn’s,  Forbidden IPA – Double IPA w/ Black Rice. For three tokens I got the Blueberry Eisbock. I liked it, but I was kinda bummed it was three tokens. 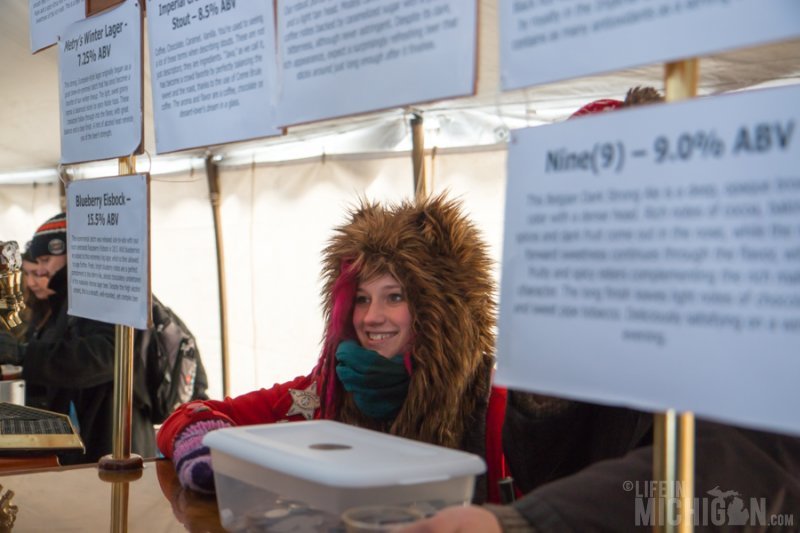 I know that I had the 51K IPA from Blackrocks Brewing and I think Chuck had the Bushytail Old Ale. I was so overwhelmed by their orange jumpsuits that is all I remember… 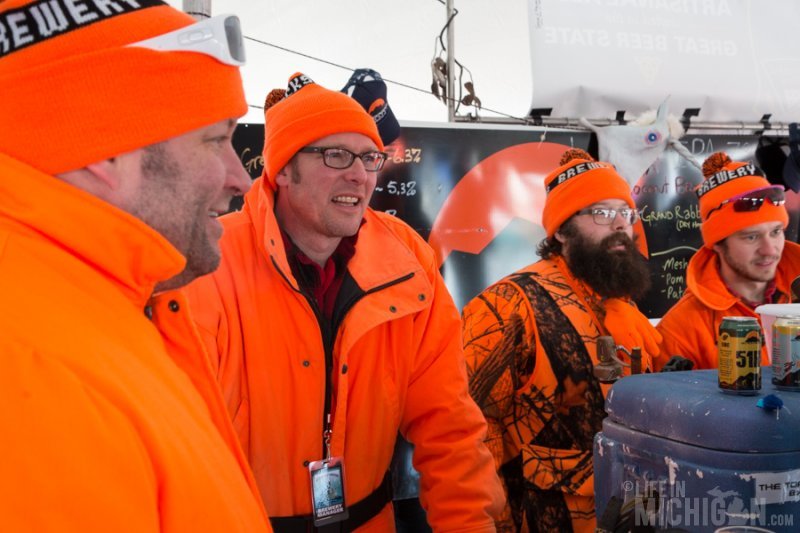 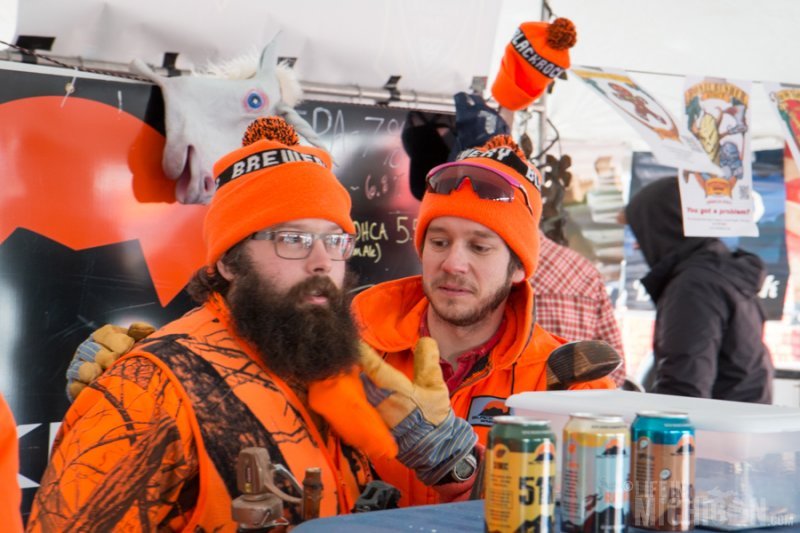 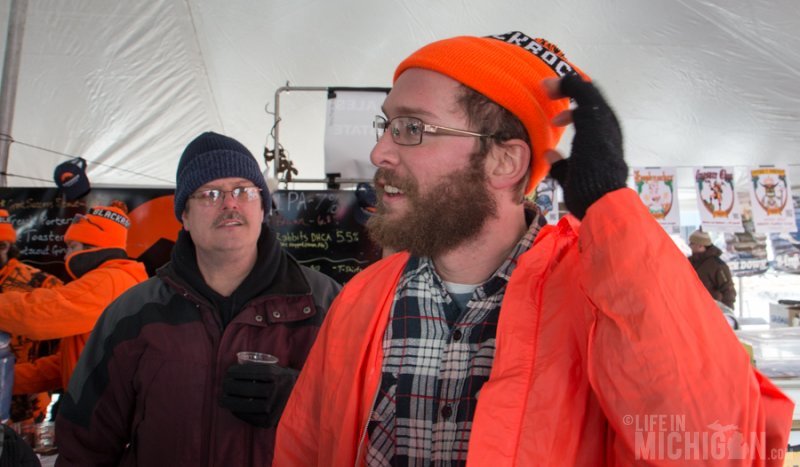 It was near the Blackrocks table that we meet our Yooper Friends. It took them 23 hours to reach Grand Rapids from Marquette. They were stranded at the bridge. Now that is dedication. They produce a show in the UP.  Hopefully they will post a comment and tell us more about it! 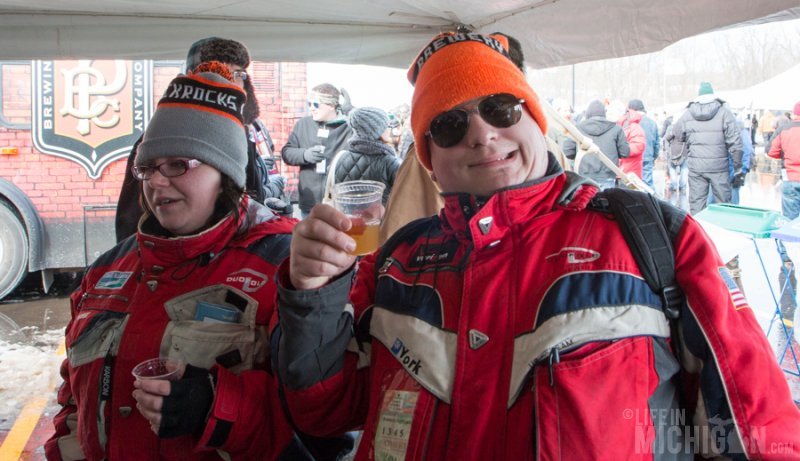 We visited many more breweries: Stormcloud, Unruly Brewing (which was Chuck’s favorite new brewery), Odd Side Ales, White Flame Brewing, Our Brewing and, of’ course, Shorts! We made more friends. I’m sure they have stories to share about their encounter with us! Stop by our gallery and scan the photos! Leave a comment and share your Winter Beer Festival experience with us. Or better yet, follow us on Facebook.