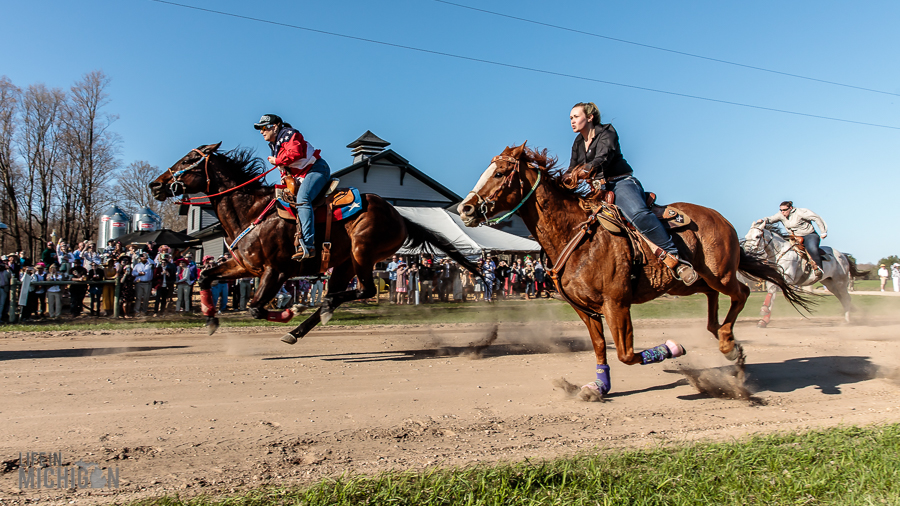 The Hats and Horses Event doubled as a Kentucky Derby Party and a fundraiser for the Friends of the Betsie Valley Trail (FBVT), a non-profit dedicated to keeping the 22 mile Betsie Valley Trail well-maintained. They’ve got their work cut out for them too. The trail extends from Frankfort to Thompsonville and runs along the Betsie Bay to the Betsie River. If you get a chance, make time on your calendar to explore it. If you’ve got the means, stop by their site and make a donation.

Your Hats and Horses Event ticket not only gained entry to the party, but also two drink tickets, dinner, excellent seats for the 3rd Annual Iron Fish Horse Race, and musical entertainment from the Bootstrap Boys. Plus there were party games, auctions, 50/50 drawing, awards, and a live viewing of the Kentucky Derby Party.

After we pulled the trigger on tickets for the Iron Fish’s Hats and Horses Event, Angie immediately focused on a hat and asked what I planned to wear. She also suggested Jeff and Chuck buy bow ties. As you can only imagine, that idea was immediately squashed. This behavior stymied me which only demonstrates my naivete around Kentucky Derby Parties. A few days later my computer dinged announcing the arrival of a message featuring a picture of Angie’s new hat. 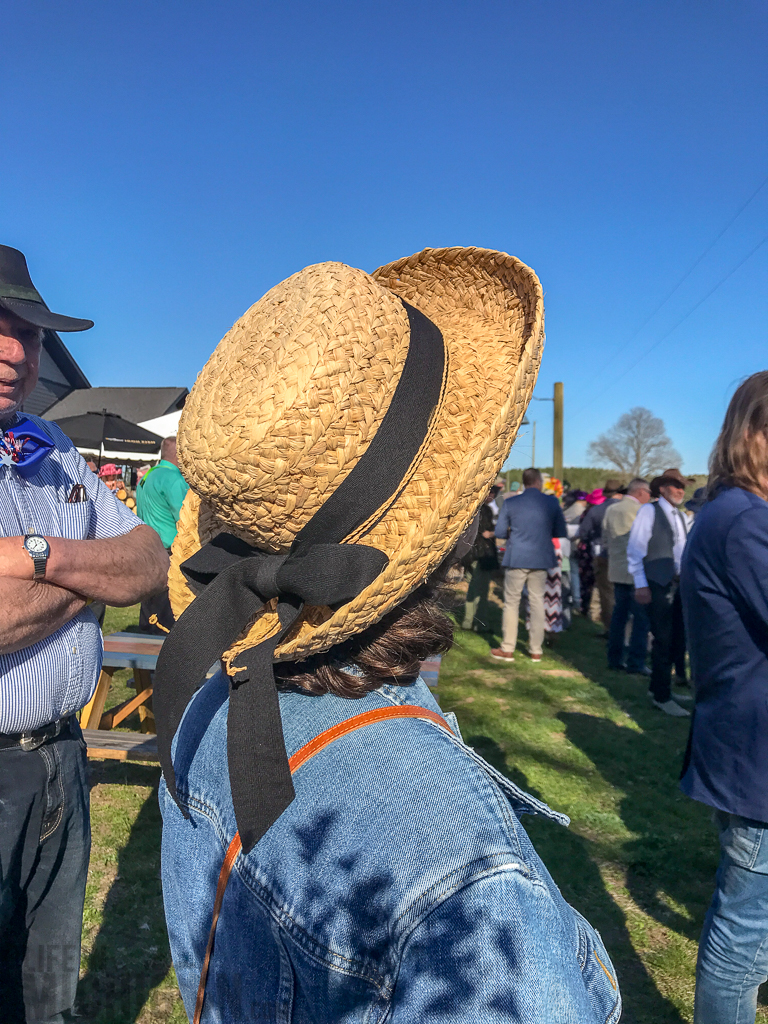 Cute I thought but I still didn’t quite understand the hat thing. Hours before we were to leave for the event I found myself standing in front of a very cute women’s clothing boutique while waiting for Chuck. Mostly because I was bored, I ducked inside with no plans to buy anything. The women behind the counter chimed like a clock, “Are you looking for anything specific?” “No,” I say dismissing them, “Just browsing.” 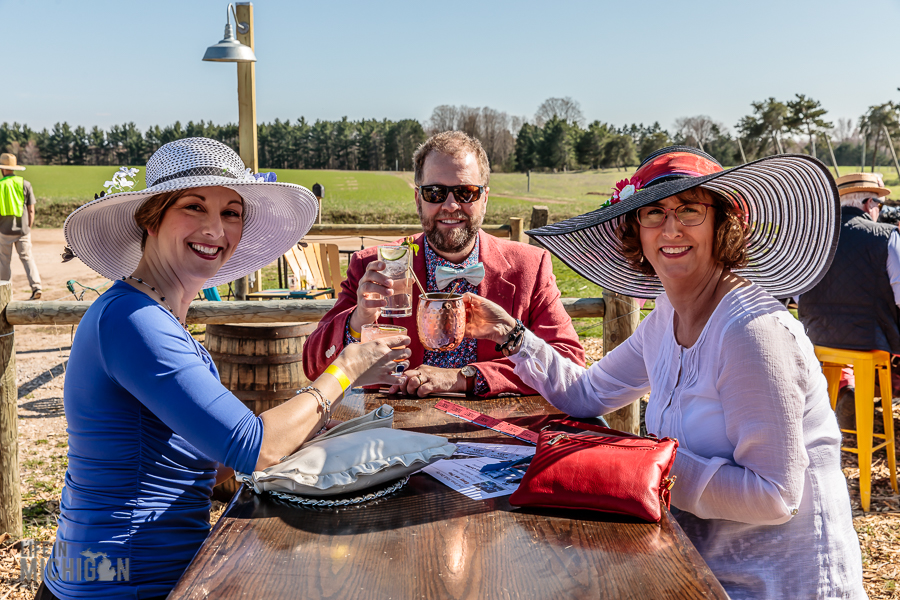 These women have secret powers. Ten minutes later Chuck and I were leaving with a fascinator hat wrapped in pretty tissue paper. Not only did they talk me into buying the hat, but they also had Chuck carefully carrying it. As we walked the mile home, I felt like a school girl with a new boyfriend carrying her books. He had one corner of the flowered tissue paper bindle pinched between two fingers and was carrying it like someone would carry a stinking dishrag to the laundry room.

I modeled it when we got home. My very honest son said, “Mom it looks a bird is attacking your head.” He is likely right. We caught Kentucky Derby Fever. Chuck resurrected a top hat he’d squirreled away in the archives labeled “Memorabilia from My Youth”.  Yes, the Marshalls were ready for the Hats and Horses Event. 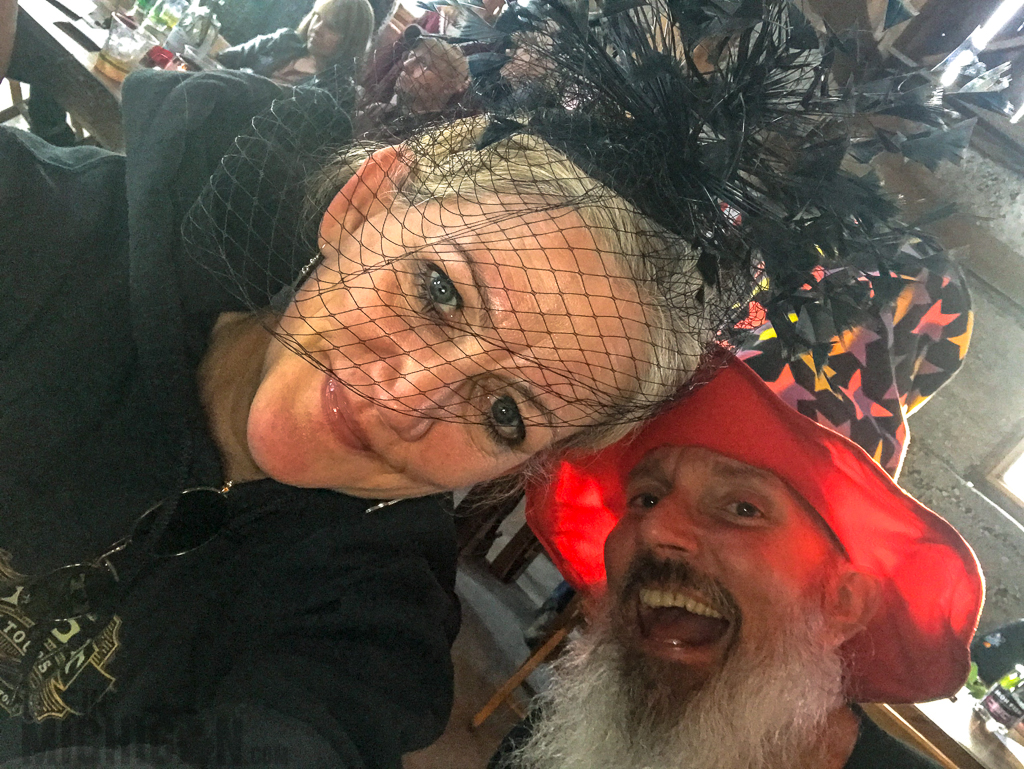 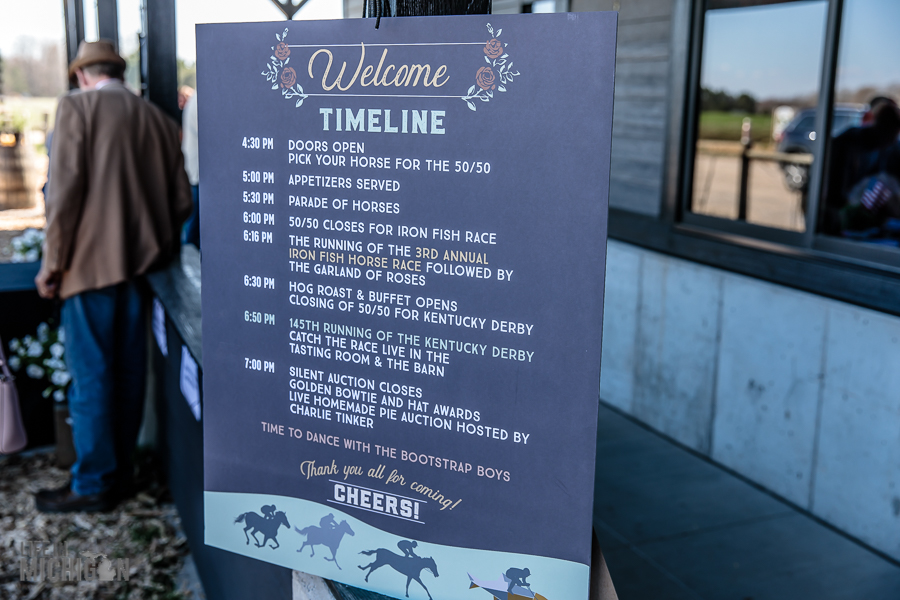 We discovered Iron Fish Distillery on a rain-soaked afternoon in January. Let me tell you, their distillery tour is a bargain at $10 a person. You get a history lesson, a demonstration of their soil-to-spirit process, and guided tasting of their fine spirits and a motivational experience. We also learned they are making award-winning spirits. So picking a drink from the spirit list was our highest priority on race day. I wanted one of each but settled for a Dead Heat because I love gin and Mint Julep. I at least knew that Mint Juleps and the Kentucky Derby go together. 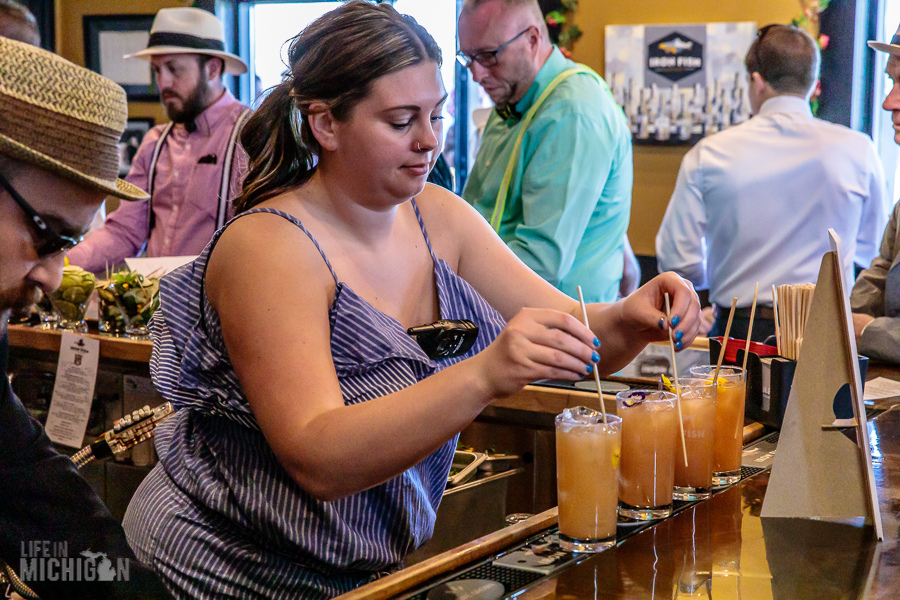 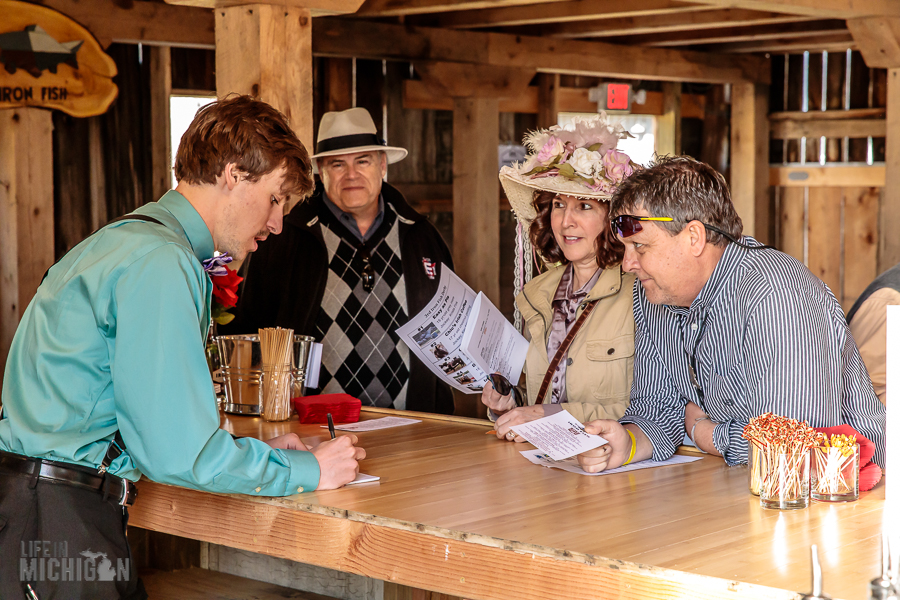 Picking your horse for 50/50 drawing was the second priority. I wish I were as lucky as this lady. Chuck captured the moment when she realized she won the 50/50 drawing! 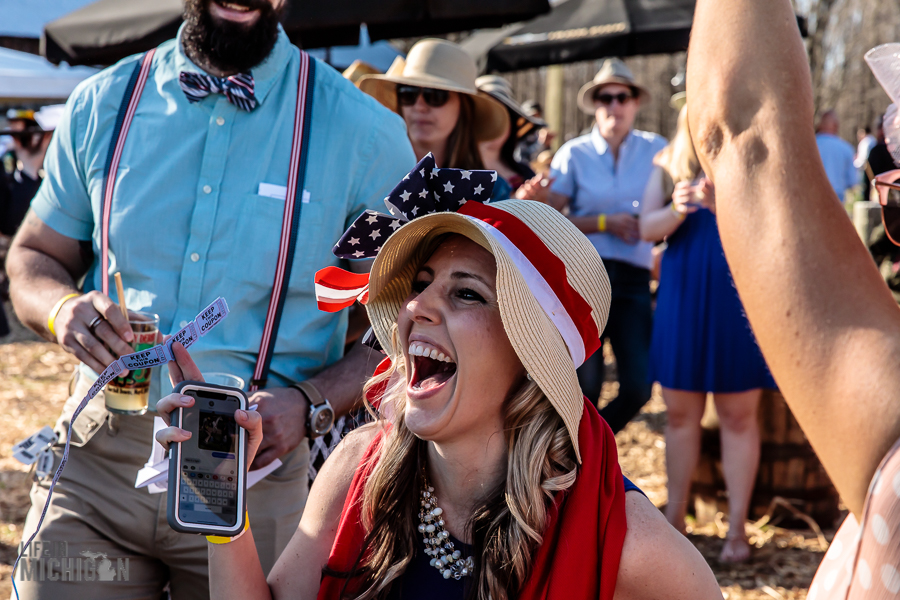 Parade of Hats and Bow Ties 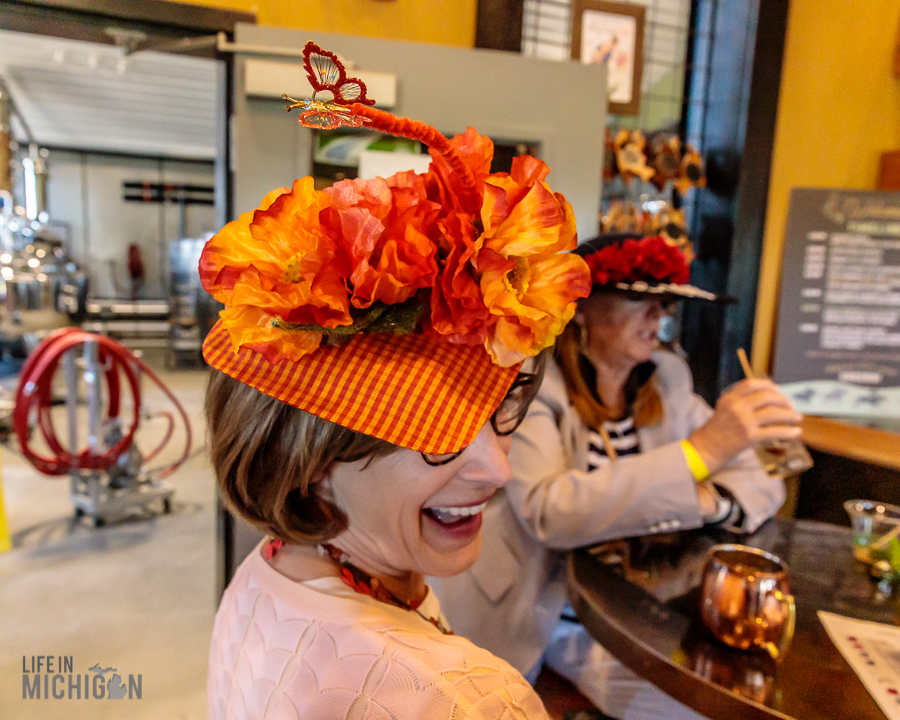 This band of glow in the dark bow tie bandits was actually a band of 7. It was hard to keep them together. 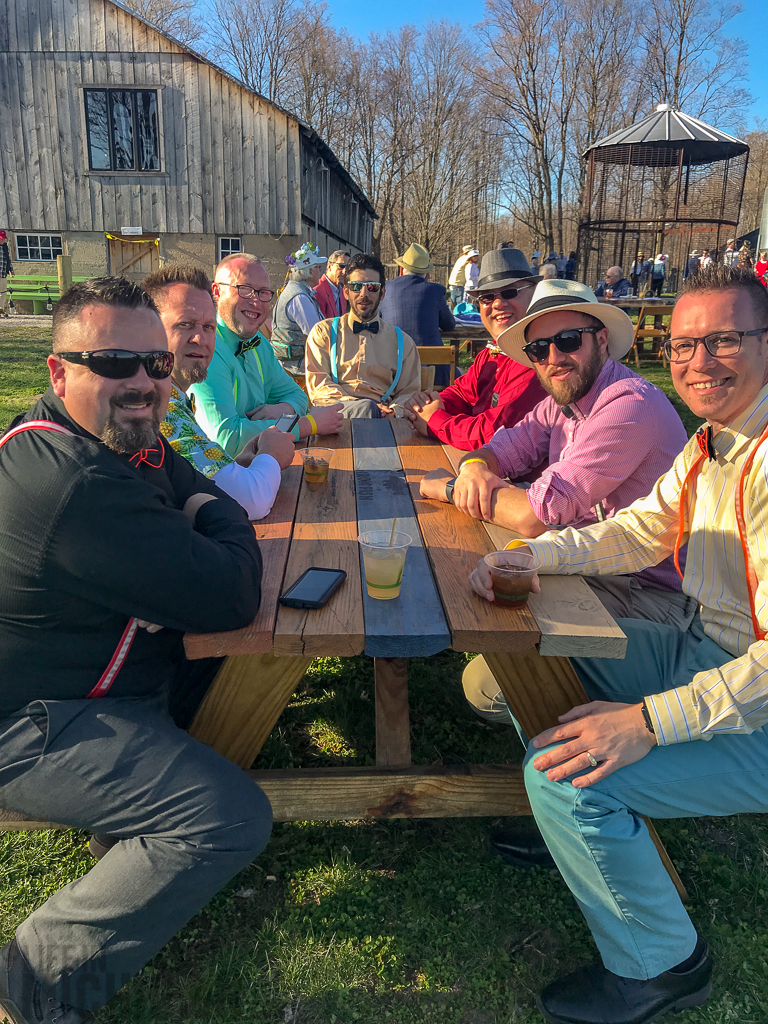 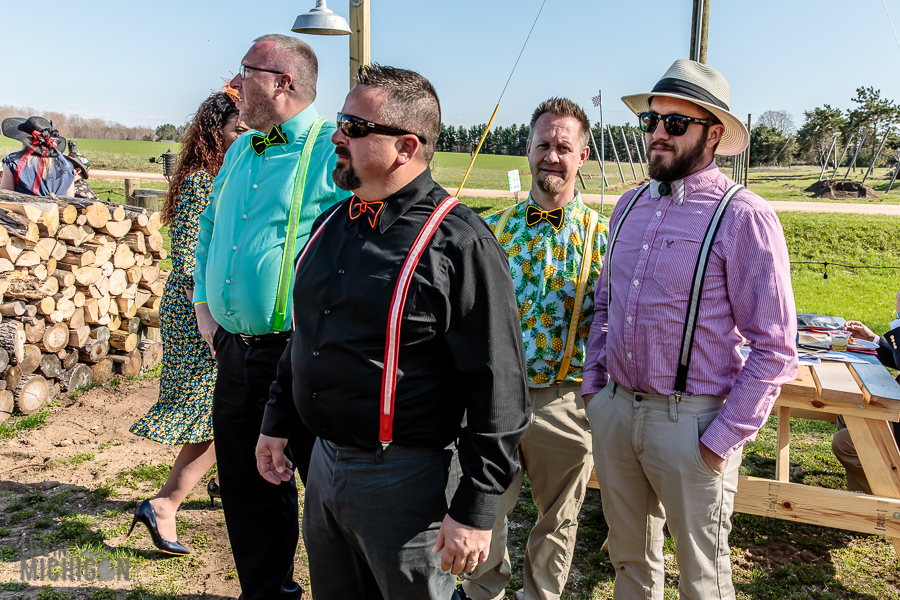 Promptly at 5:30 the Parade of Horses started. The contenders for the 3rd Annual Iron Fish Race strutted past. It was our last chance to pick the winner for the 50/50 Drawing. 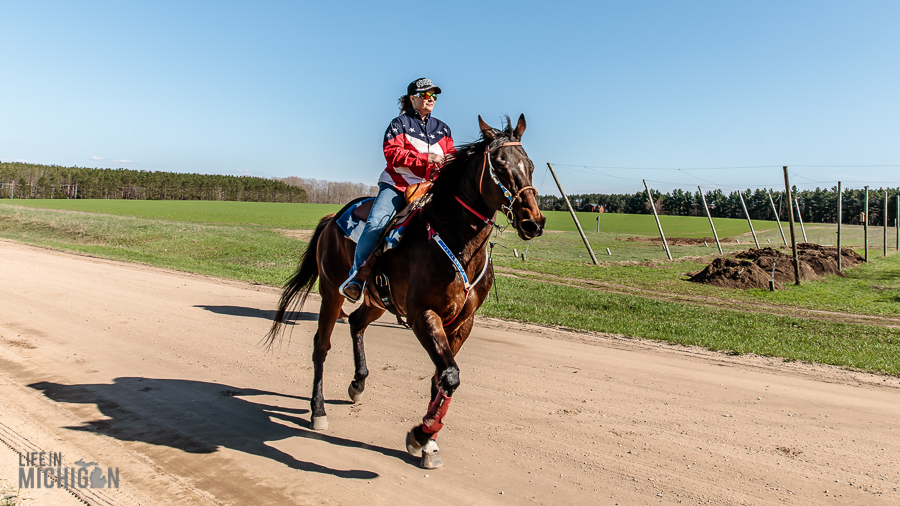 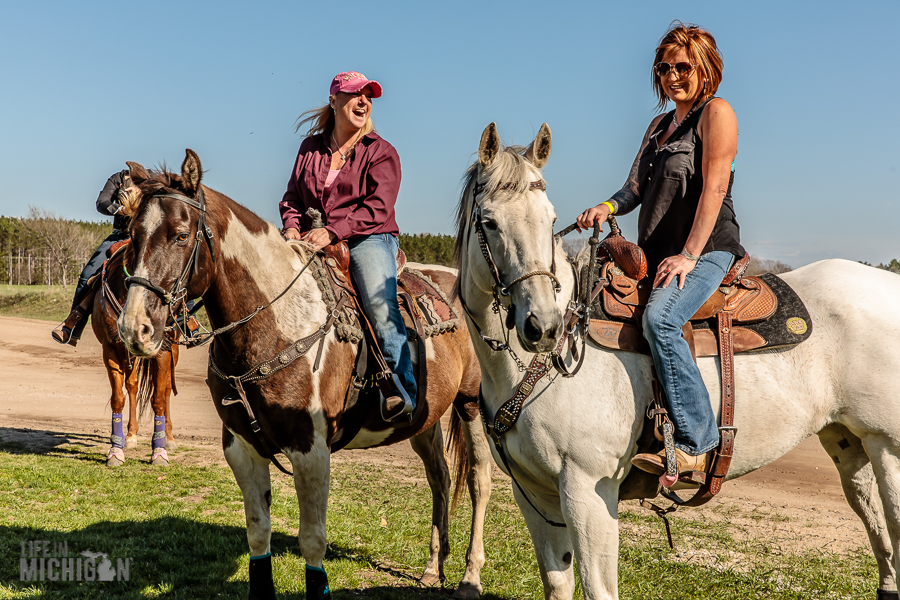 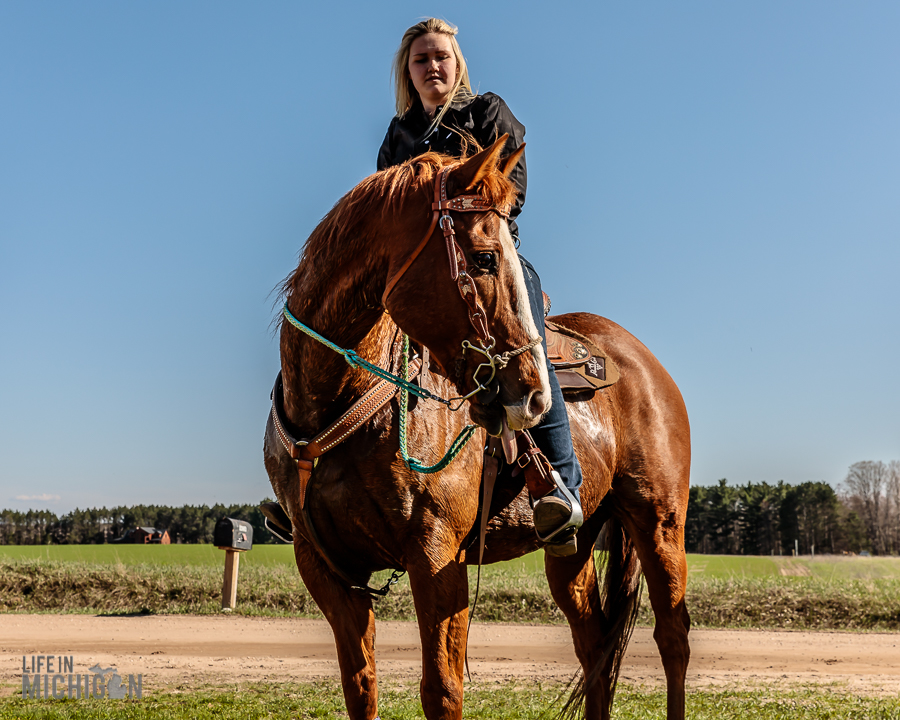 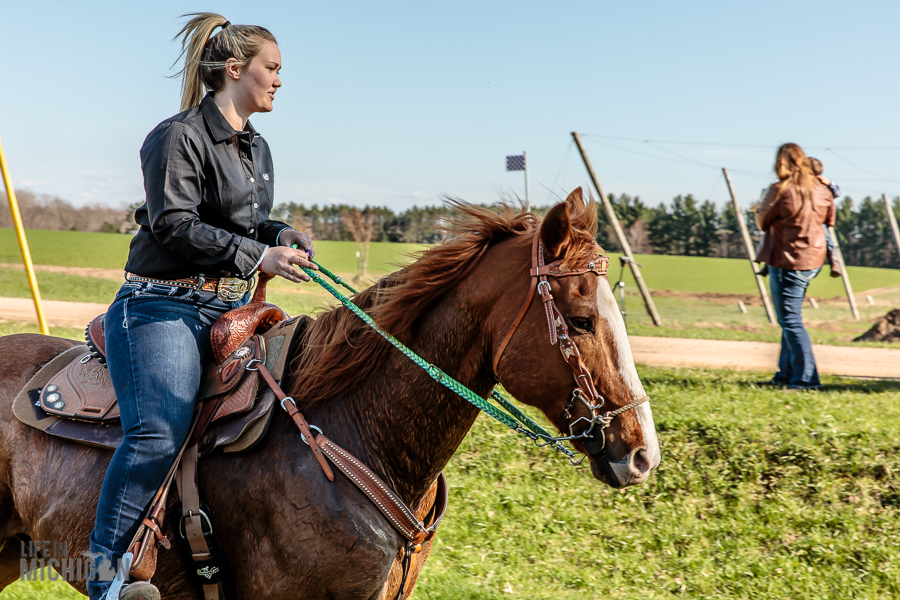 And they were off! The horses ponded down Dzuibanek Road to the finish line directly in front of the distillery. My heart races just looking at the pictures. I heard from someone, all the horses are retired racehorses. 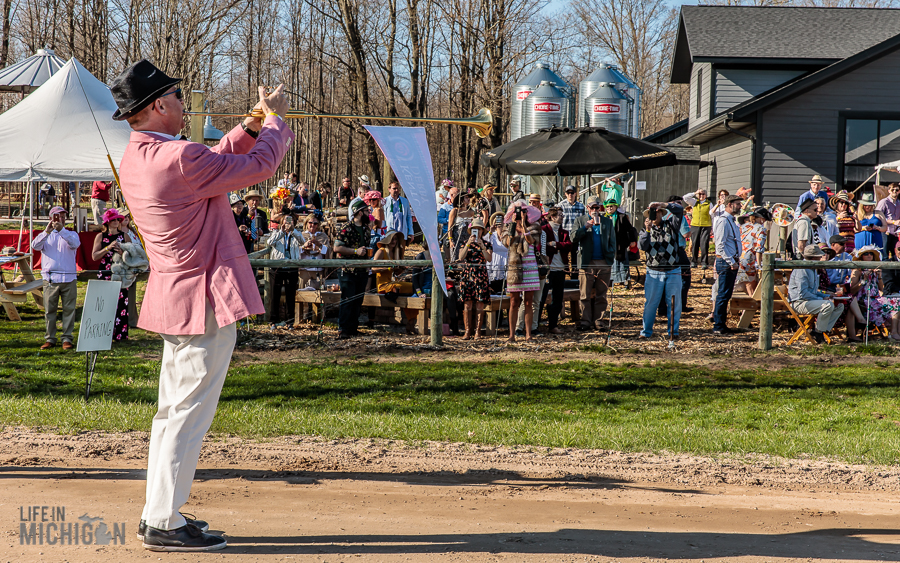 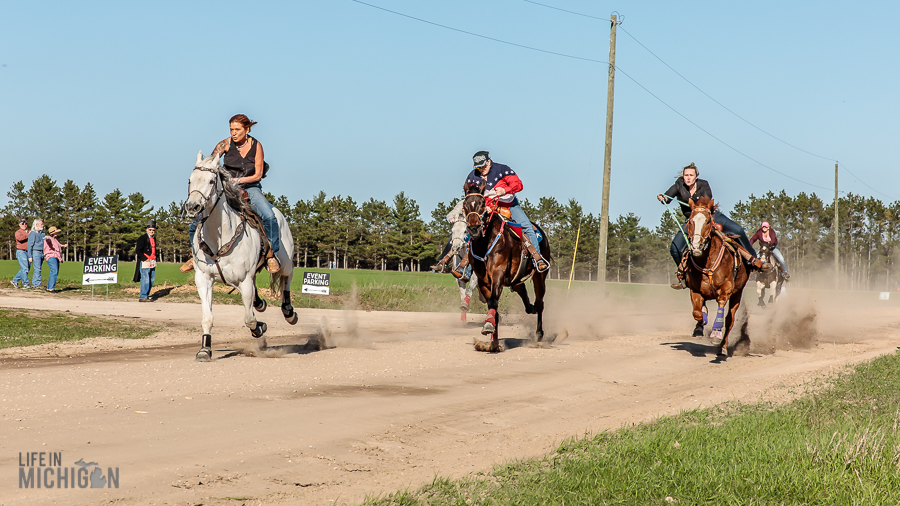 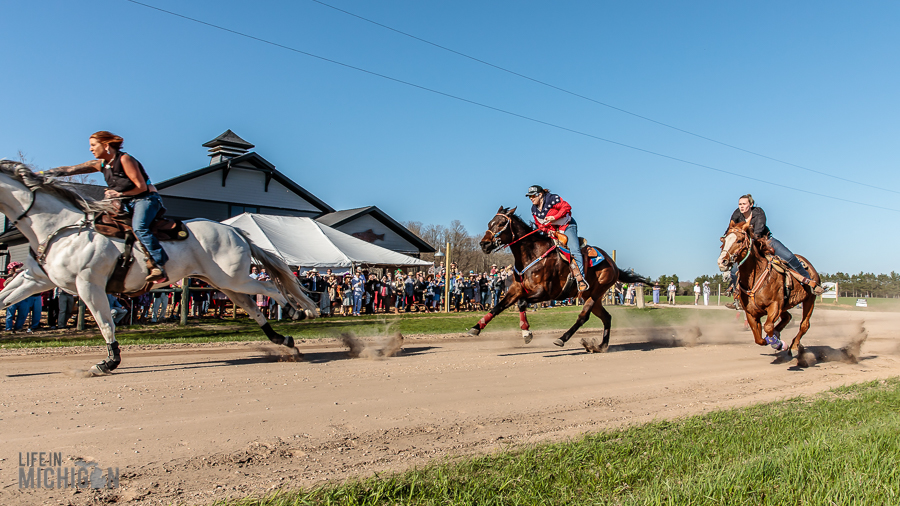 The Garland of Roses

As Easy as Pie, a 15-year-old grey mare won the 3rd Annual Iron Fish Race. She clearly is not retired! Her jockey Krista Fink said afterward, “What an adrenal rush!” It looks like Easy as Pie is quite proud of herself. 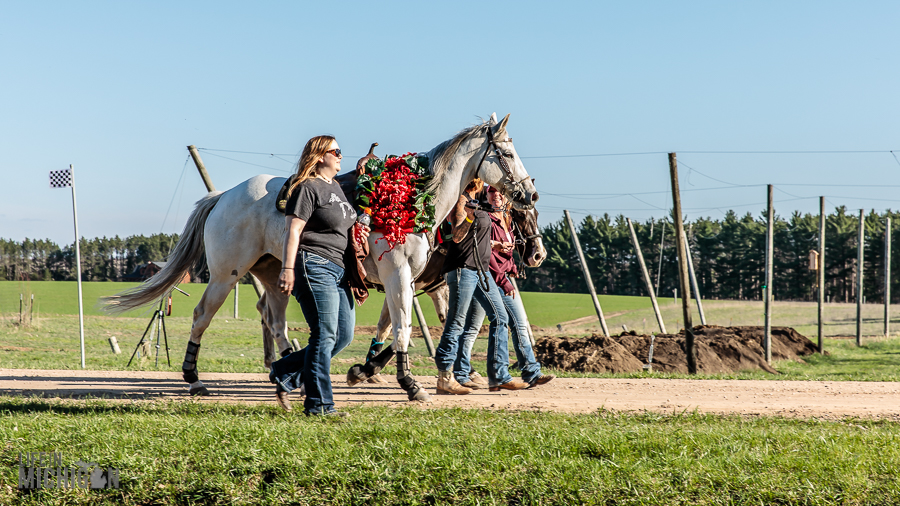 The event featured a southern style hog roast with all the fixins. If you know me, you are probably wondering, “What did you eat?” No worries, there was mac and cheese, spinach pecan salad, black-eyed pea salad, baked beans, spicy southern slaw and the best cornbread I’ve ever eaten. That is no exaggeration. I did not go hungry. 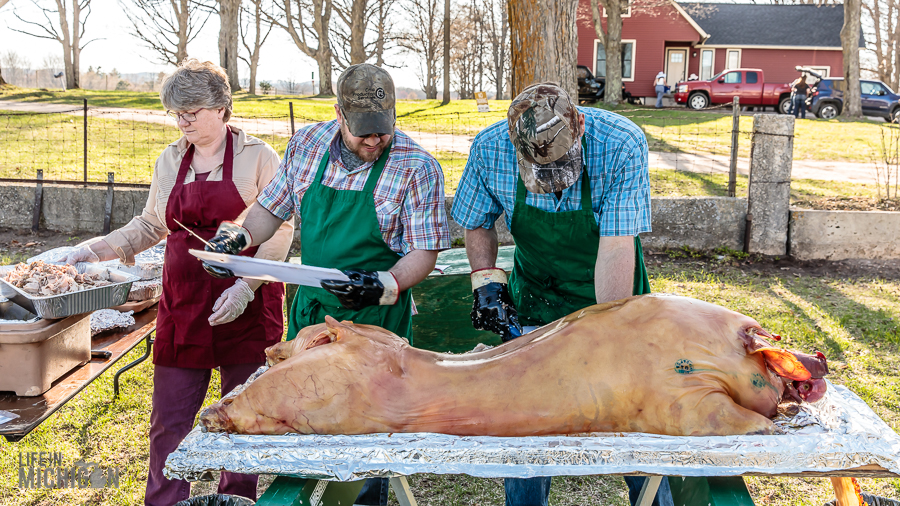 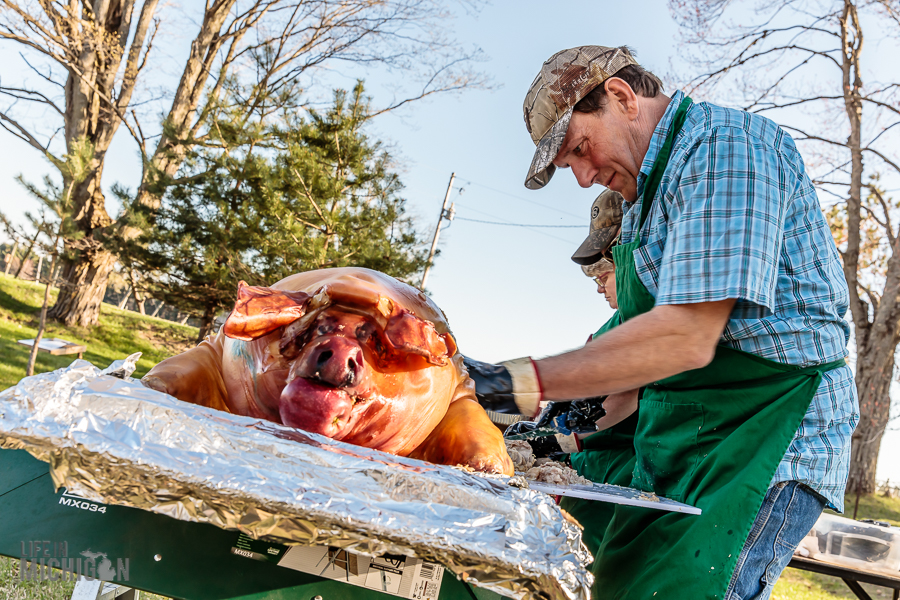 If you like party games, there were a couple of options. Fowling which is a combination of football and bowling or cornhole which needs no explanation. 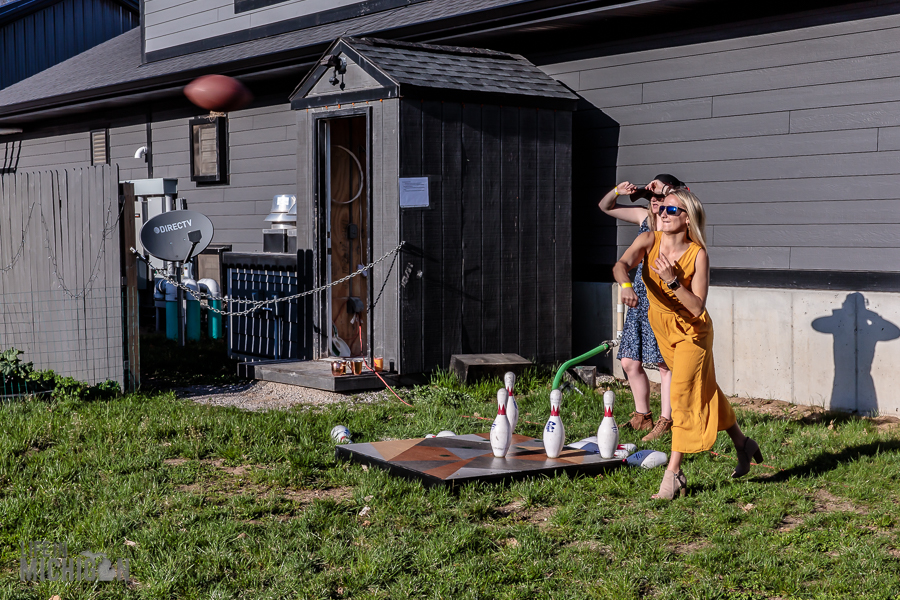 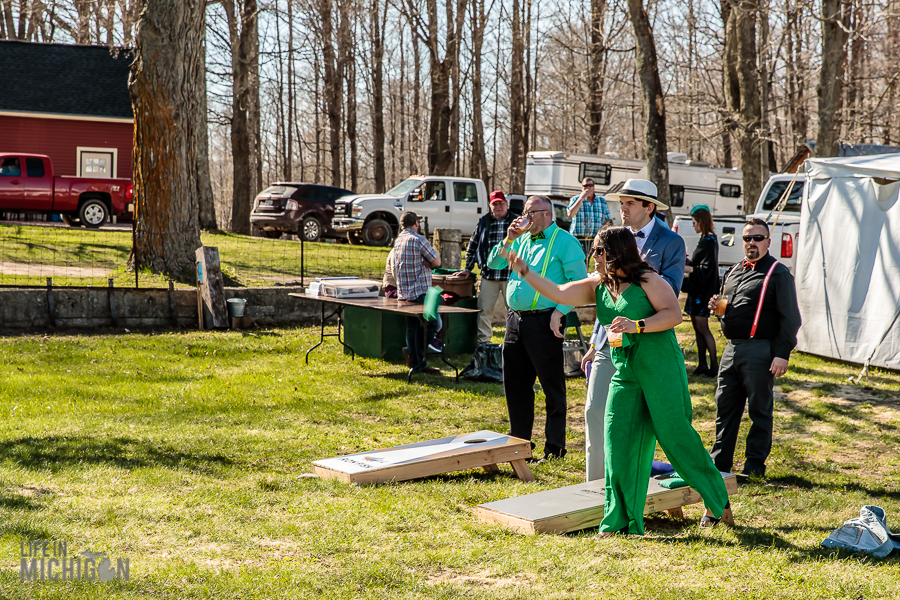 There were several places you could watch the Kentucky Derby. We opted for the observation room which overlooks the stills and such. If you want to see more pictures distillery, please check out our Iron Fish Distillery Tour post or better plan a trip to Thompsonville and take your own tour. 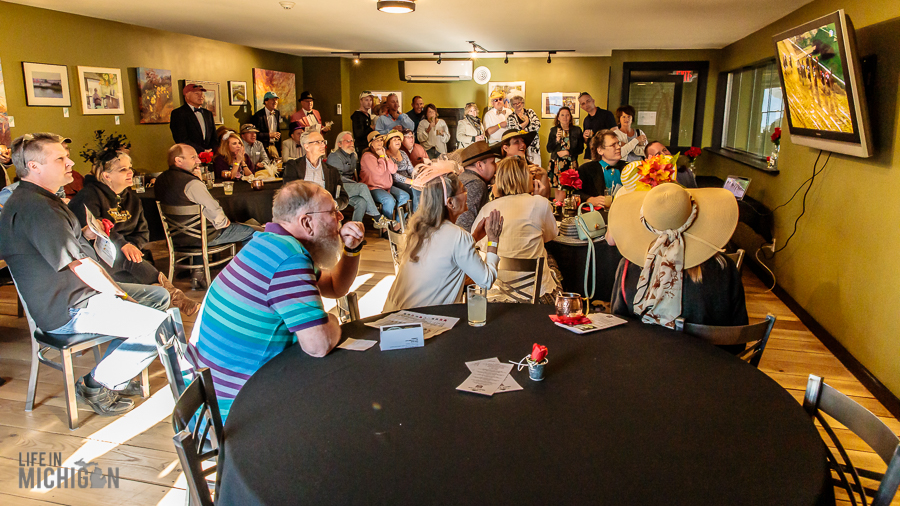 Kicking it up in the barn at Iron Fish for the Hats and Horses event were the Bootstrap Boys. We first saw them last year at the Dark Horse 4 Elf Party. Evidently they have been at each of the Iron Fish derby parties and for good reason. They play country music the way it is meant to be played. None of this pop music masking as “country”. The Bootstrap Boys are the real deal with songs that keep the tradition of storytelling alive like the greats such as Johnny Cash, George Jones, and Merle Haggard. 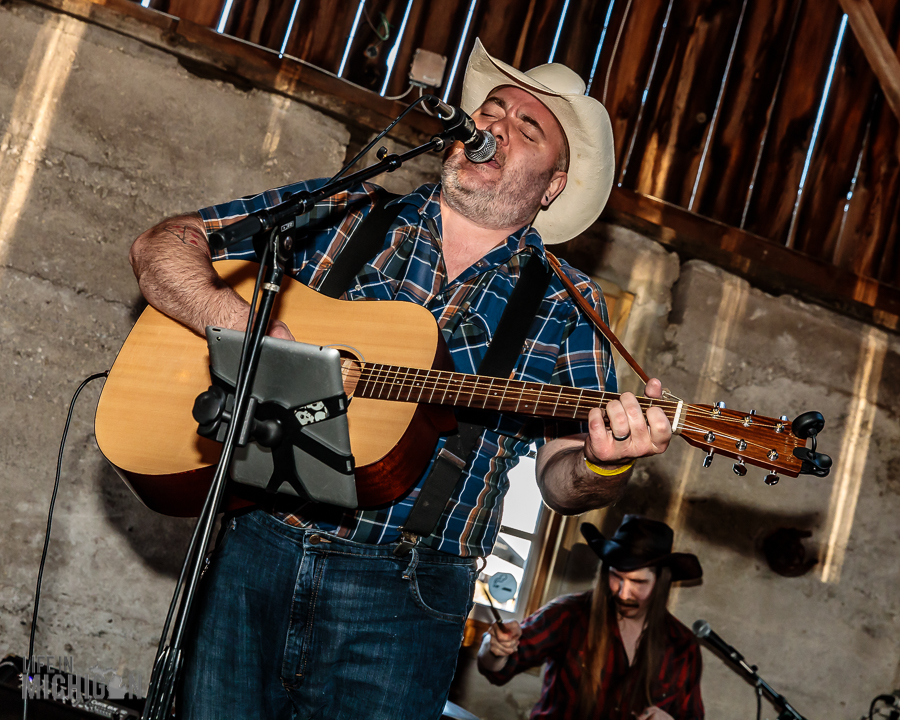 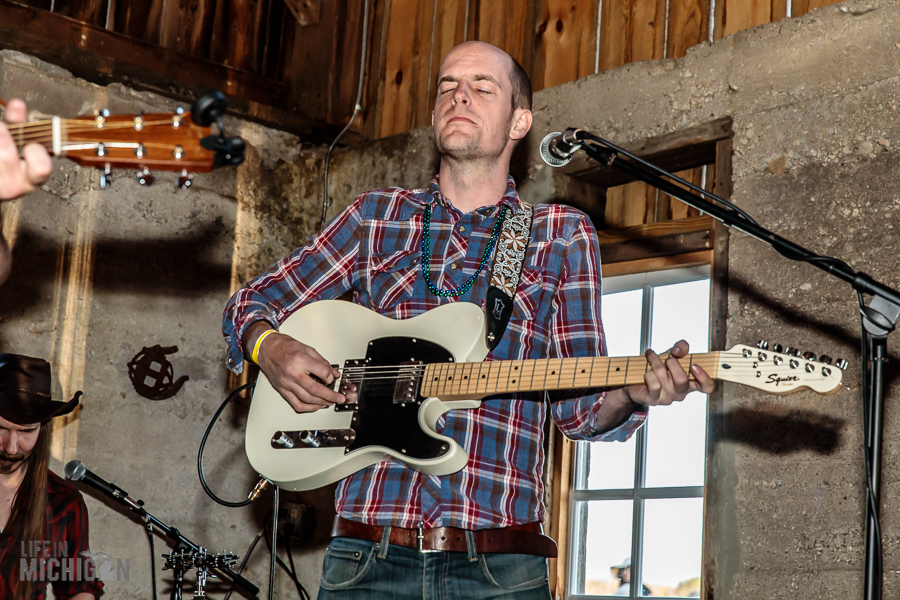 The band occupied a corner of the Iron Fish barn which doubles as an event space. The light seeped in from the west casting lines on the band as they got the evenings music going. Once most people had finished their dinner and re-supplied their drinks, the dancing took hold. The hearty music of the Bootstrap Boys was a perfect way to wrap up the Iron Fish Hats and Horses event. 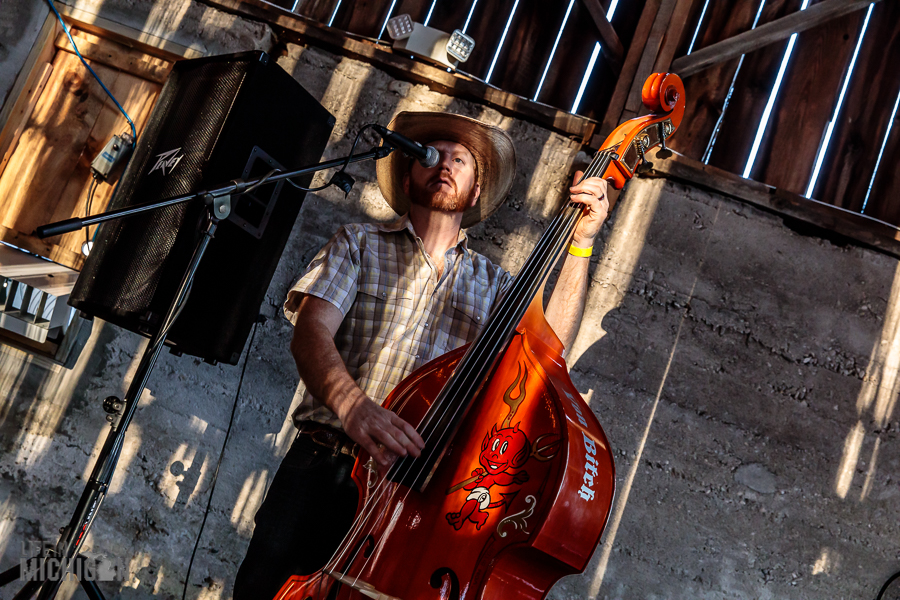 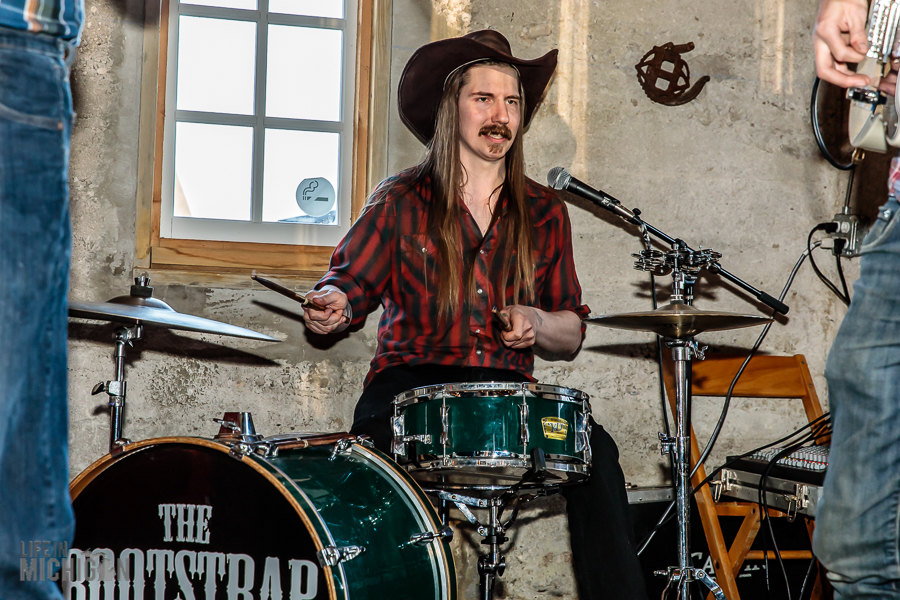 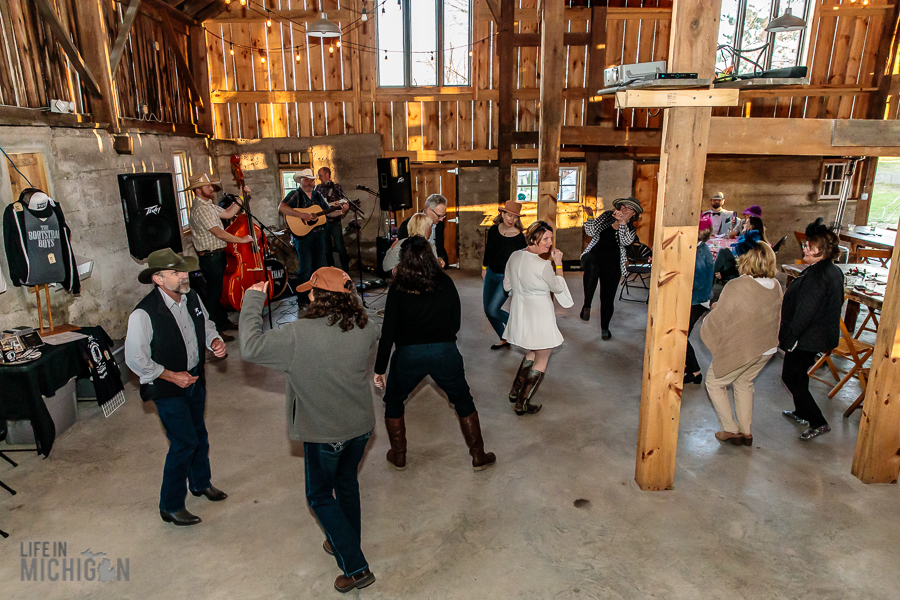 Yes, there are more pictures in our gallery. Please take a look and share on social media but you do, please give tag us and give us photo credit.