The weather was picture perfect for an afternoon of Scottish athletics, dancing, and music at the 166th annual Highland Games at Greenmead Park in Livonia. 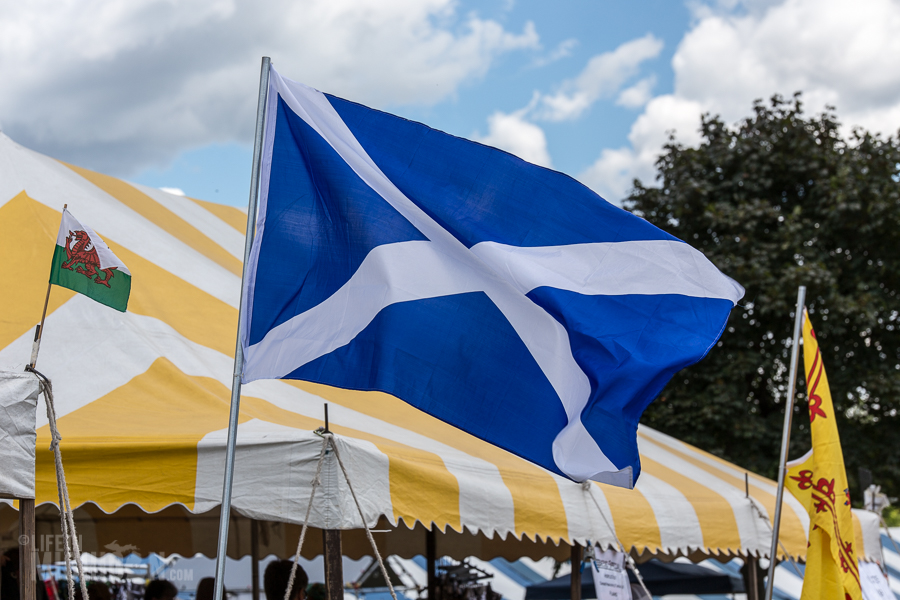 The St. Andrew’s Society of Detroit celebrates and supports all things Scottish in Michigan. The society was founded in 1849 and supports Scottish society in Michigan through charity and scholarships. This year marked the 166th Highland Games event put on by the society. The games are the oldest continuous Highland Games in North America. They are held on the first Saturday in August. Since I have some Scottish heritage and my very own family tartan, I thought it would be fun to check out the fun and share with you. 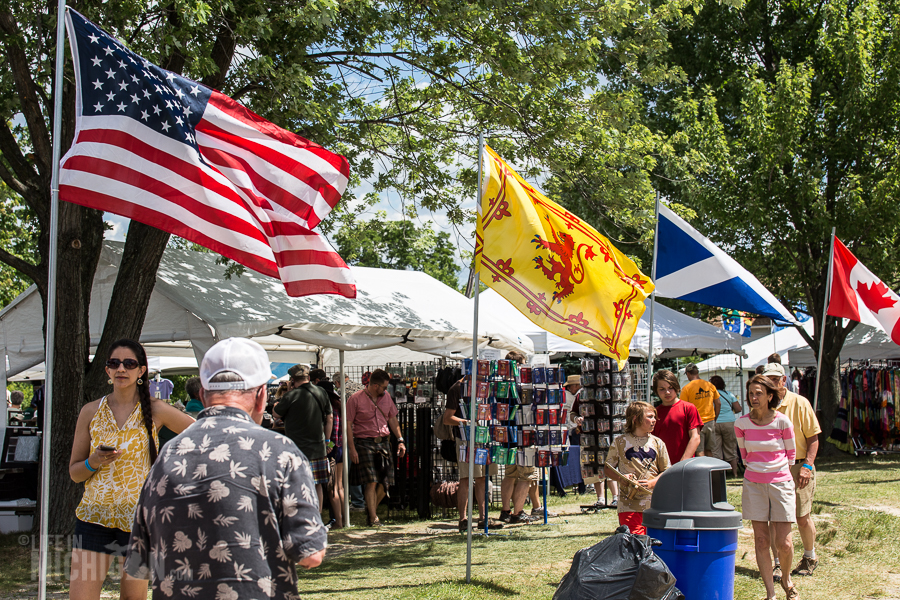 The games are held at the Greenmead Historic Park in Livonia. This 95 acre park was originally the homestead of Michigan pioneer Joshua Simmons which was founded in the 1820s. The park includes many other historic buildings which were moved to the site to preserve them from demolition. It was a fine location for the Highland Games celebration.

One of the biggest draws of the Highland Games are the athletic competitions. They have both amateur and professional competitions. We arrived as some impressively strong professional athletes were flinging some heavy blocks of metal over a bar. The weight of the metal block is 4 stones or 56 pounds. Competitors would swing the weight up and try to throw it over the bar which ended up at around 18 feet by the time they got down to a winner. You have to be pretty damn strong and have great technique to excel at this game. 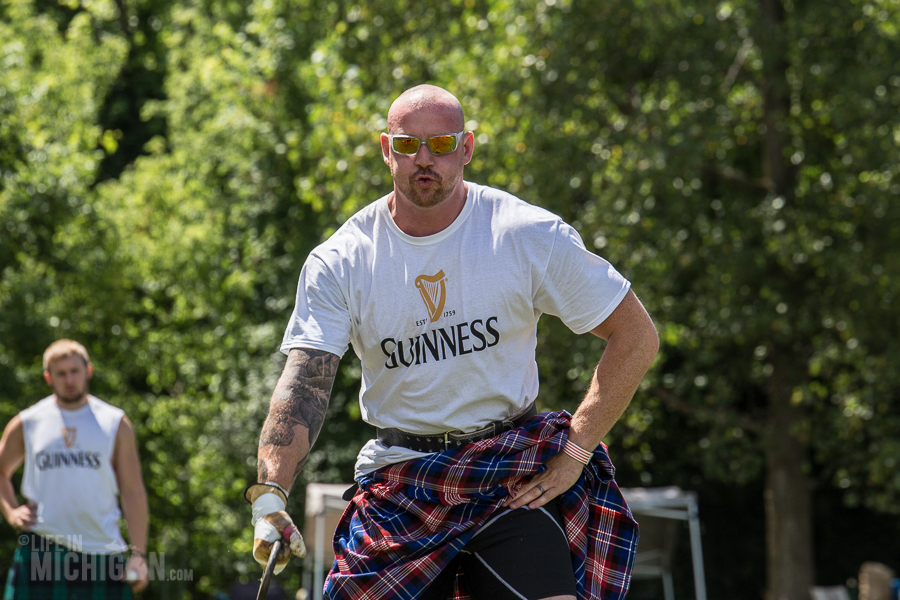 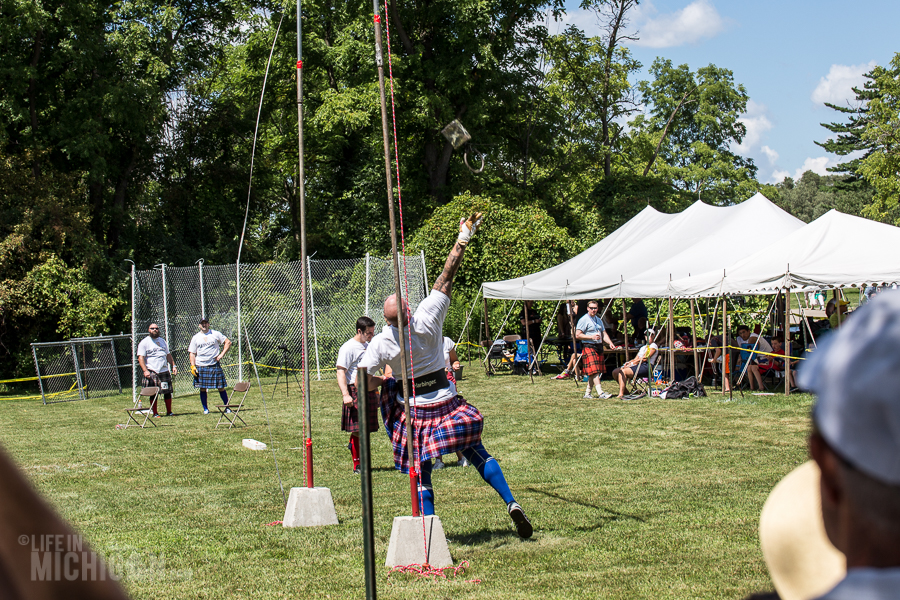 The caber toss drew in a big crowd as who doesn’t love seeing someone throw a tree. The athletes have to pick up and balance a 19ft log that weighs about 175 pounds and then try to flip it end over end. You get points for how straight you can flip the caber with 12 o’clock on the clock face being a perfect toss. 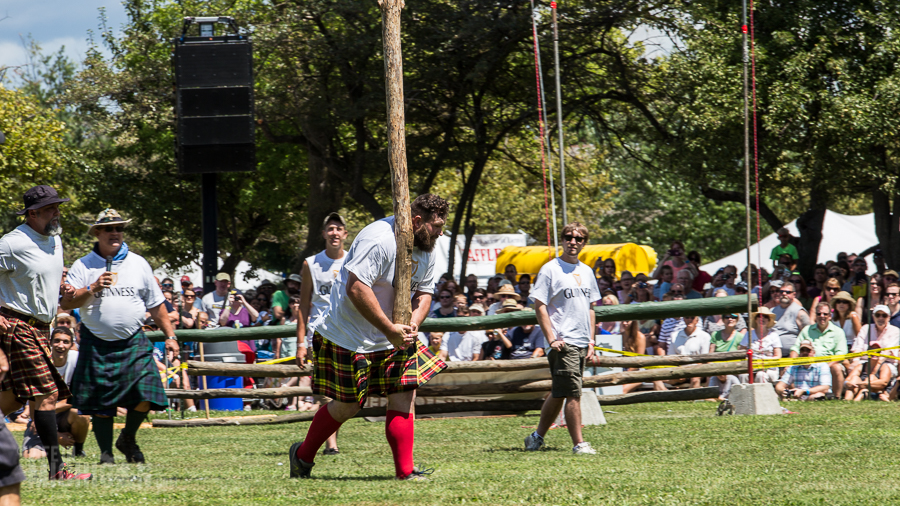 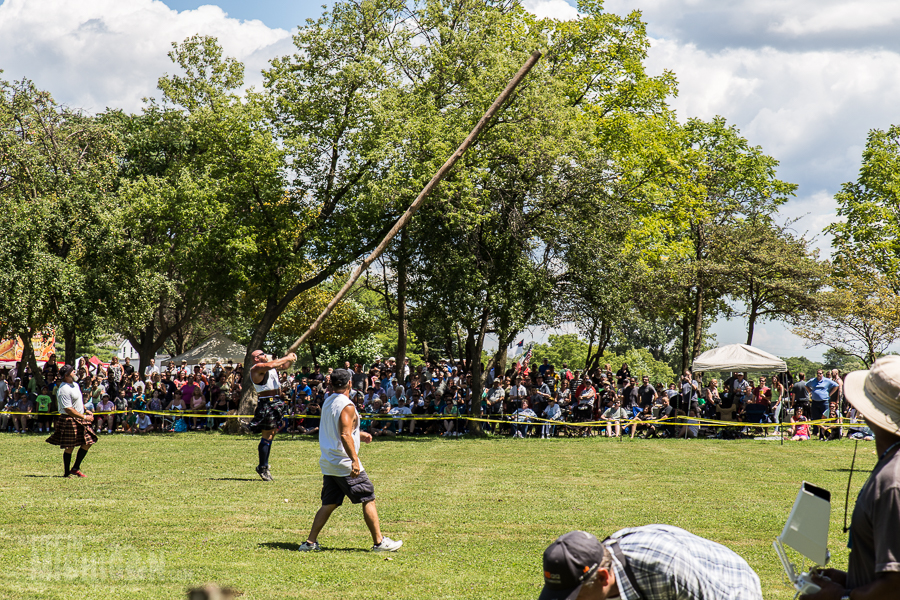 The last big feet of strength was the farmer’s walk. This event was open to anyone who could pick up 200 pounds in each hand and walk with it. Yes, you read that correctly. These fellas were deadlifting 400 pounds and then walking around with it! The winning walker covered nearly 380 feet. The weights used for the farmers walk were provided by Atomic Athletic. We had a chance to chat with Roger LaPointe from Atomic Athletic. He was a great guy and a wealth of knowledge about strength training and the games. Stop by the gallery for more pictures from the athletic competitions. 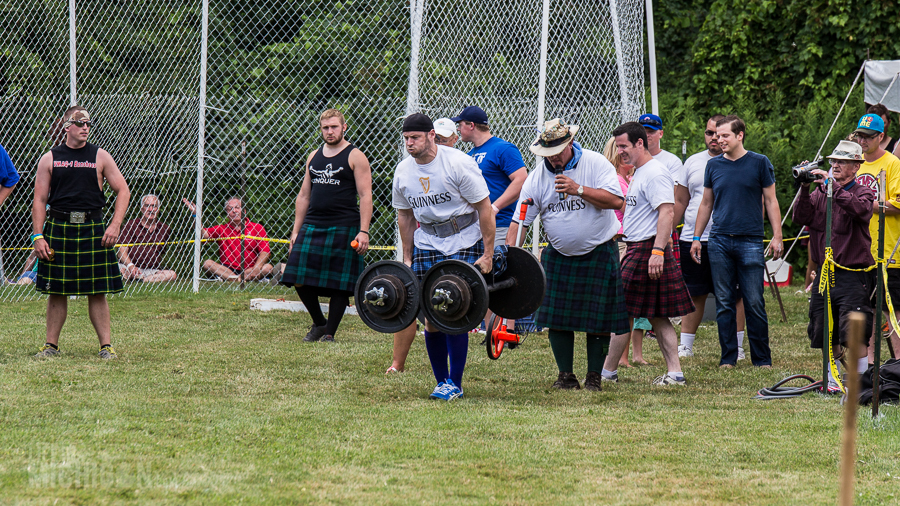 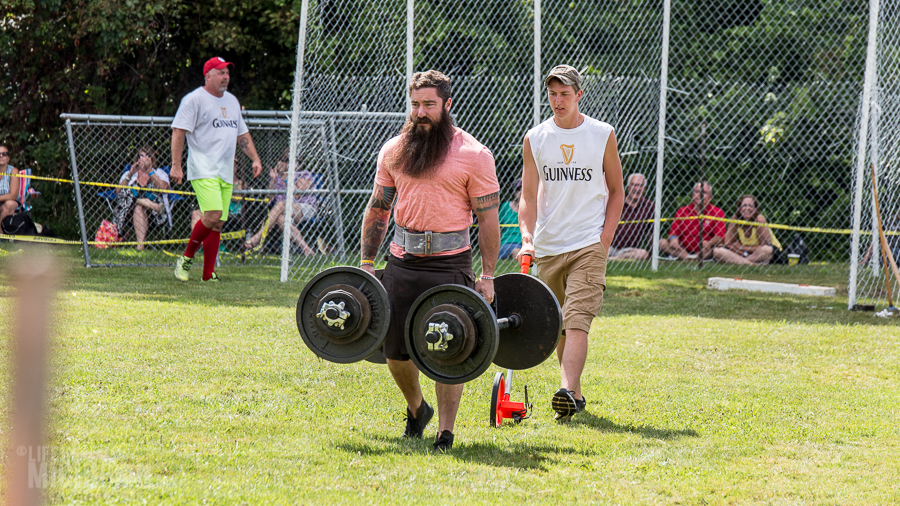 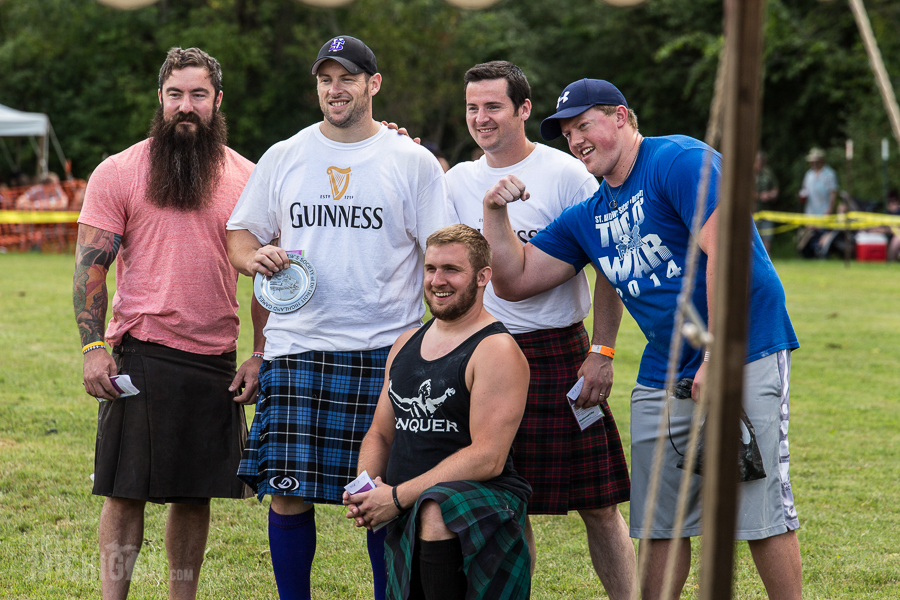 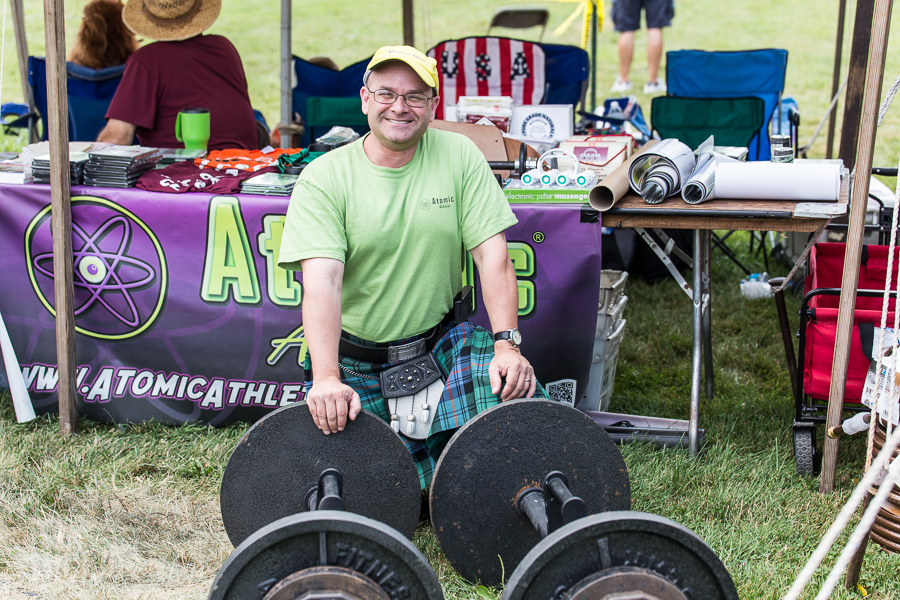 There is something that raises the hair on your arms and stirs the heart when you hear the bagpipes. This is heighten when you hear a complete drum and pipe corps playing “Scotland The Brave”. The Highland Games feature full drum and pipe corps marching during the opening and closing ceremonies. They also included individual band competitions. You can wander the park and find bands working to polish their chops before competition. 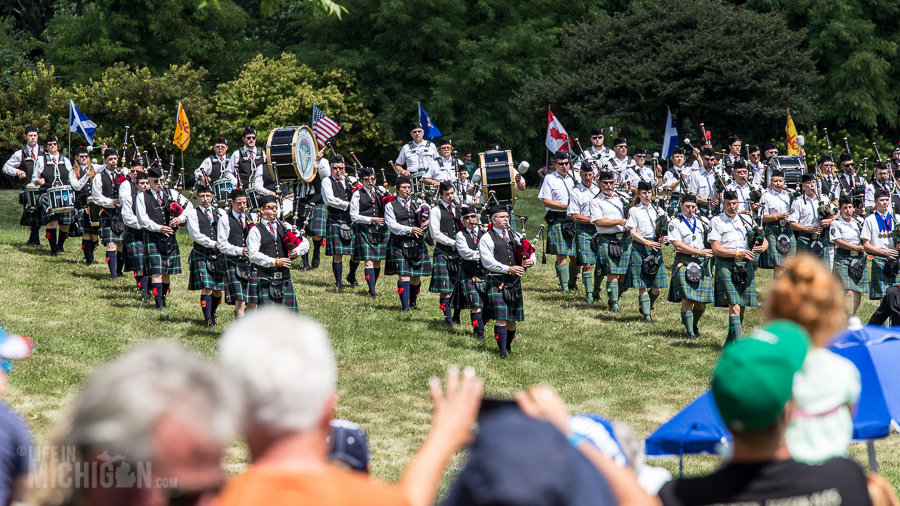 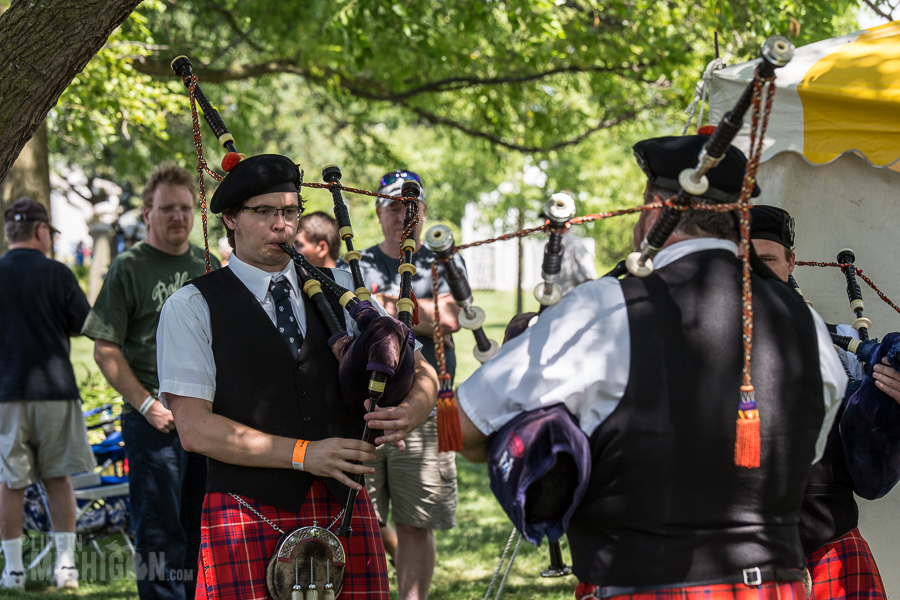 There is a tremendous amount of techniques, skill, and stamina that goes into Highland Dance. The women dancing make it all look so easy which is a testimony to their talent. It was quite a treat to see these athletes perform. 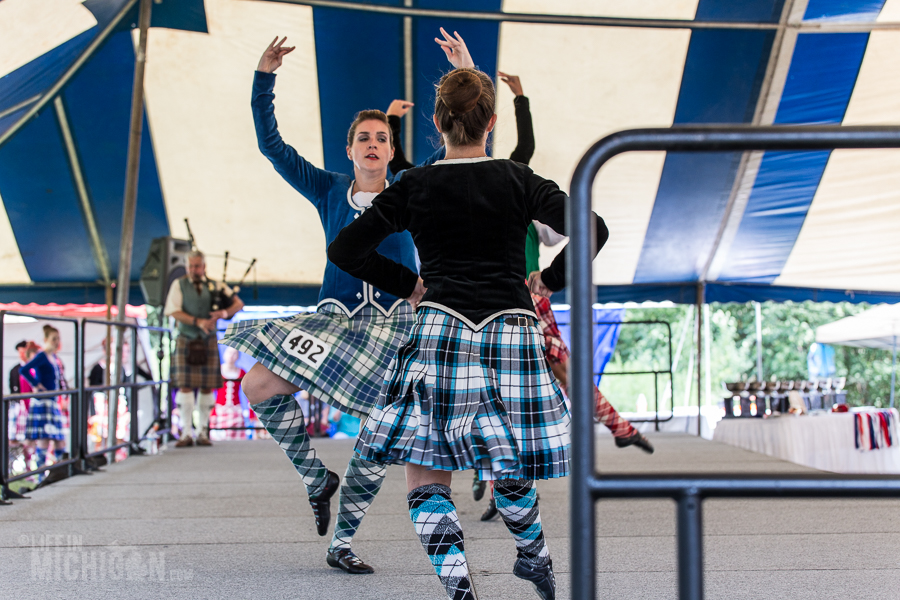 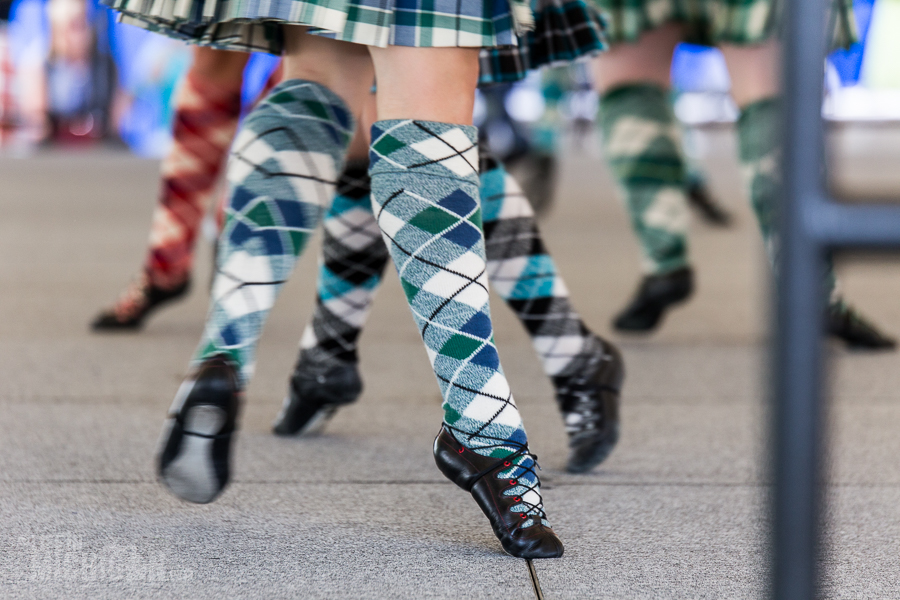 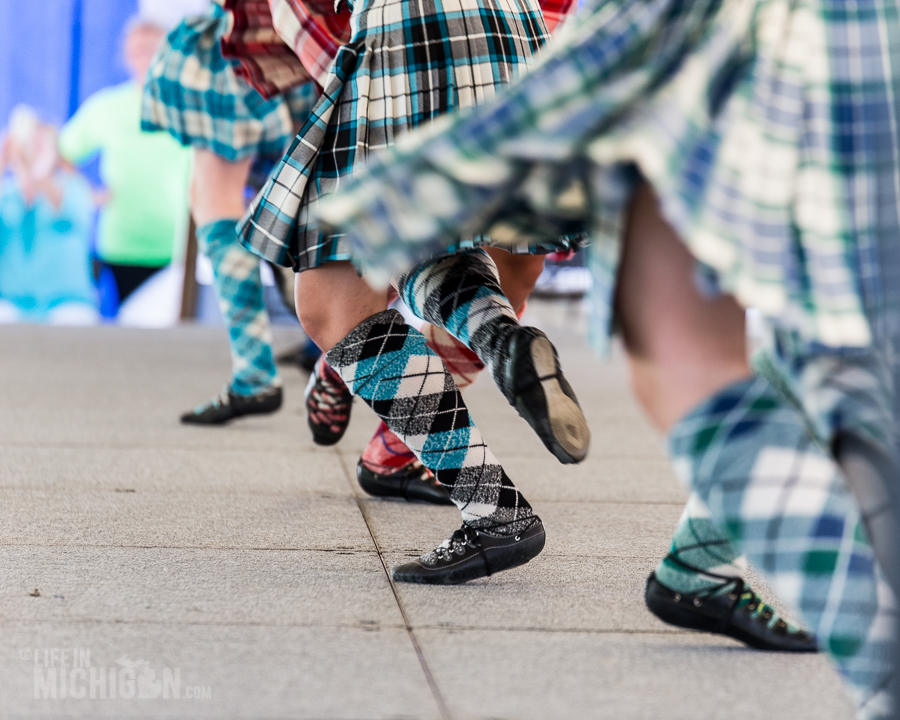 In addition to all the great competitions, there were plenty of other diversions to keep you going.  There was a whole midway with food and vendors selling all kinds of goods from t-shirts to kilts. You could also visit the various clan booths and get a leg up on researching your Scottish roots. 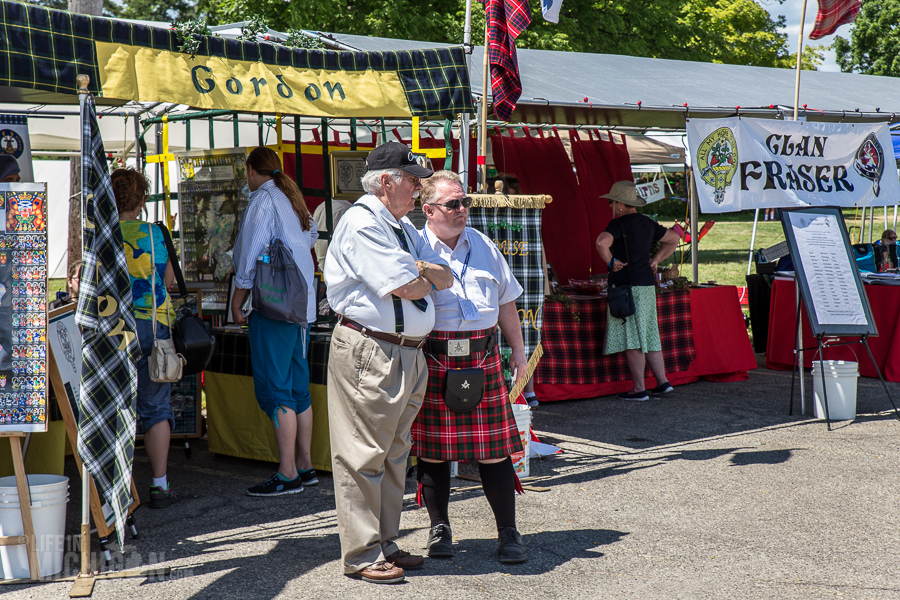 A great feature of the Highland games is the musical entertainment that they bring to the beer tent. This year we had the opportunity to see two great bands; Albannach and Stone Clover.

All the way from the homeland, Albannach were outstanding. Powerful drum rhythms combined with pipes and a didgeridoo made for some energetic and intriguing music. They really played for the audience and made the music fun and exciting. Their music would make great theme music for a hard trail run. There are more pictures of the band in the gallery. 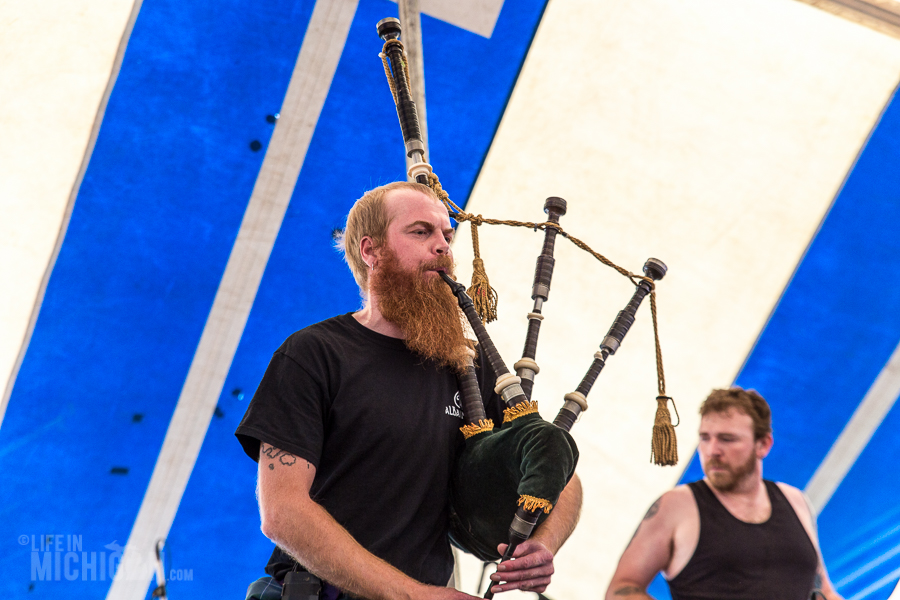 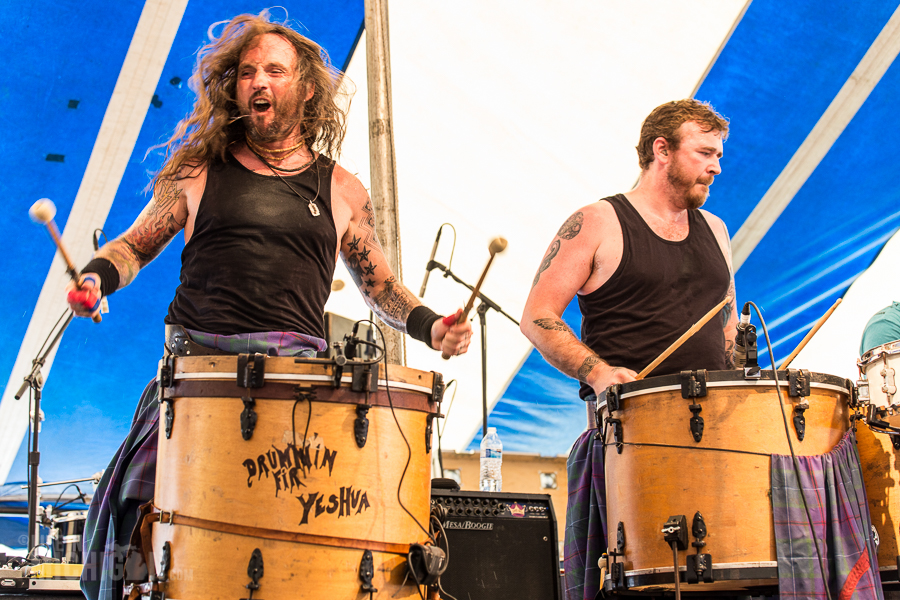 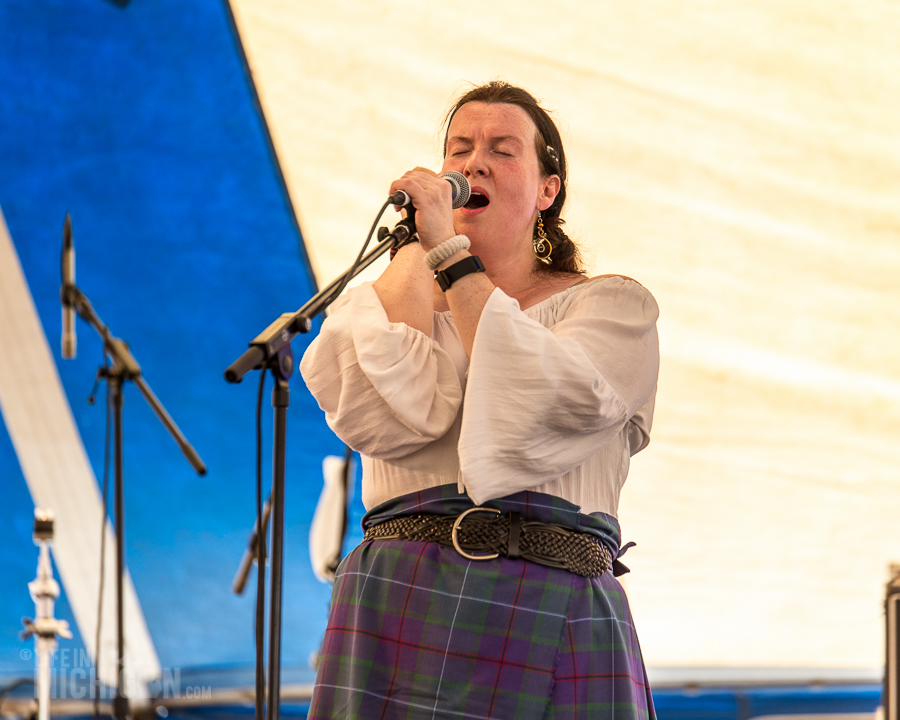 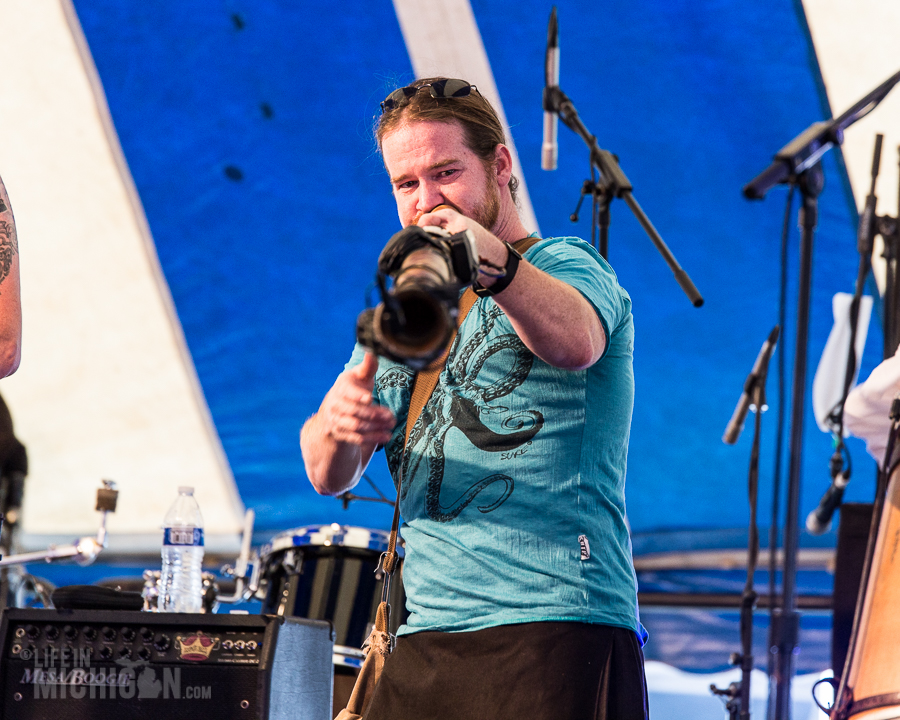 We saw Stone Clover for the first time at the Summer Beer Fest and were happy they were at the Highland Games. This band plays rocking Celtic music with a boatload of enthusiasm. Their music will put a big old smile on your face. The bonus is that these guys love a good beer and they are local. They played from the heart and entertained everyone in the audience. Be sure to stop by the gallery for more pictures. 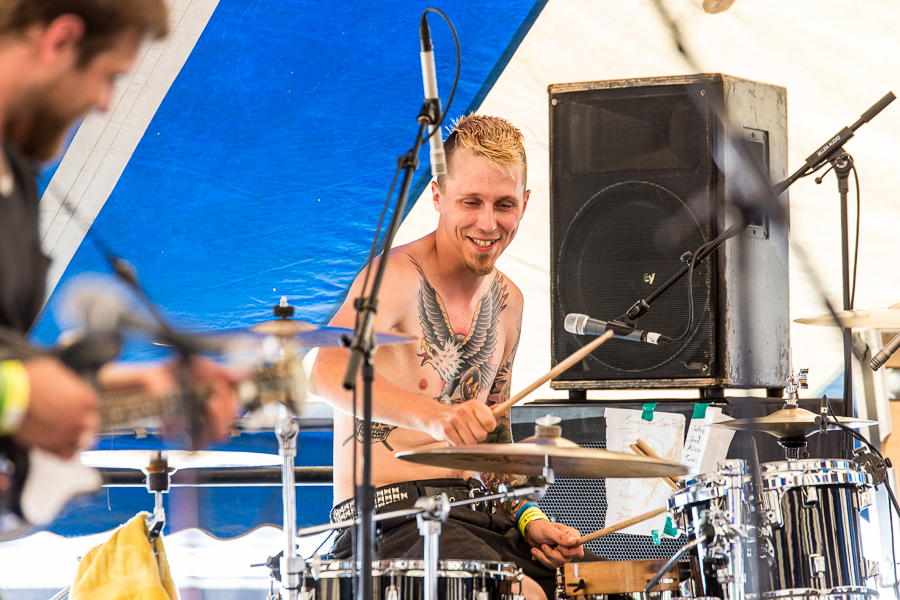 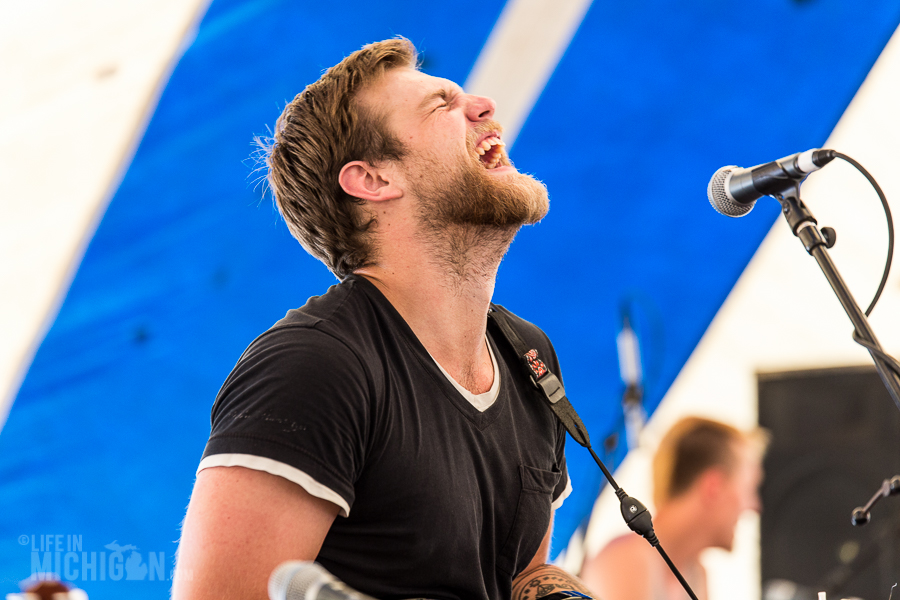 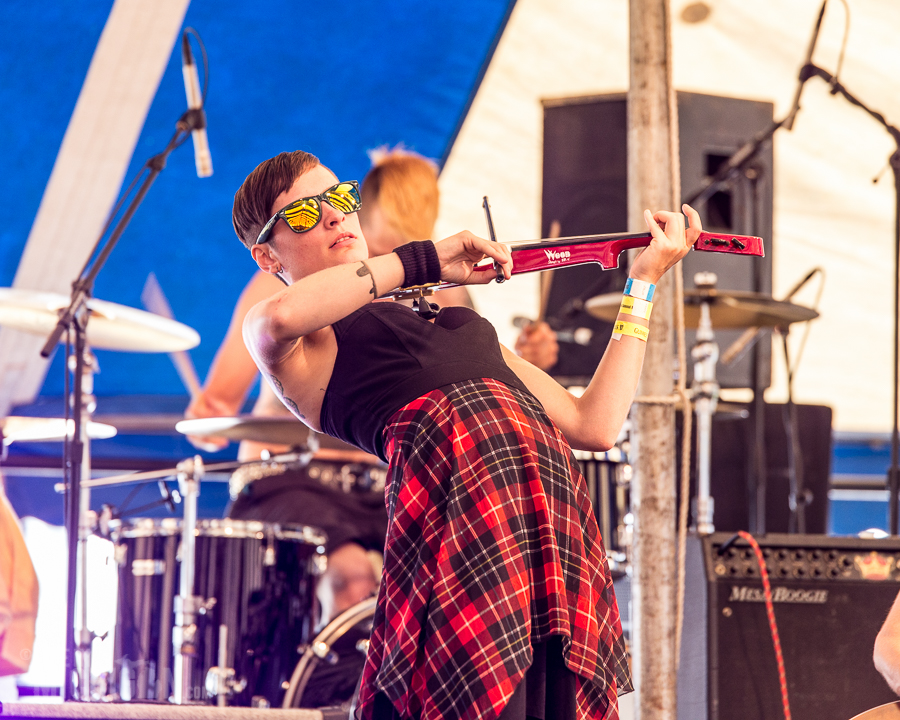 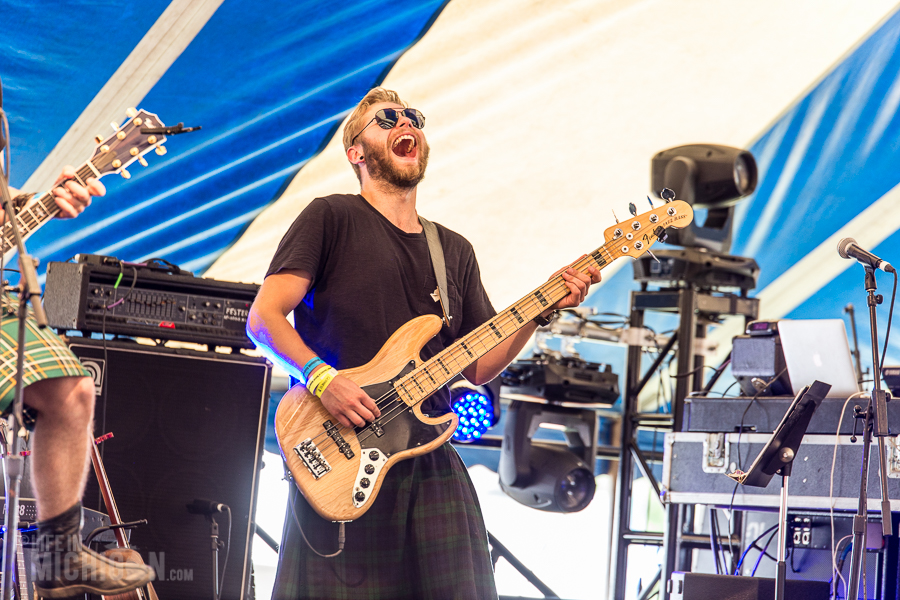 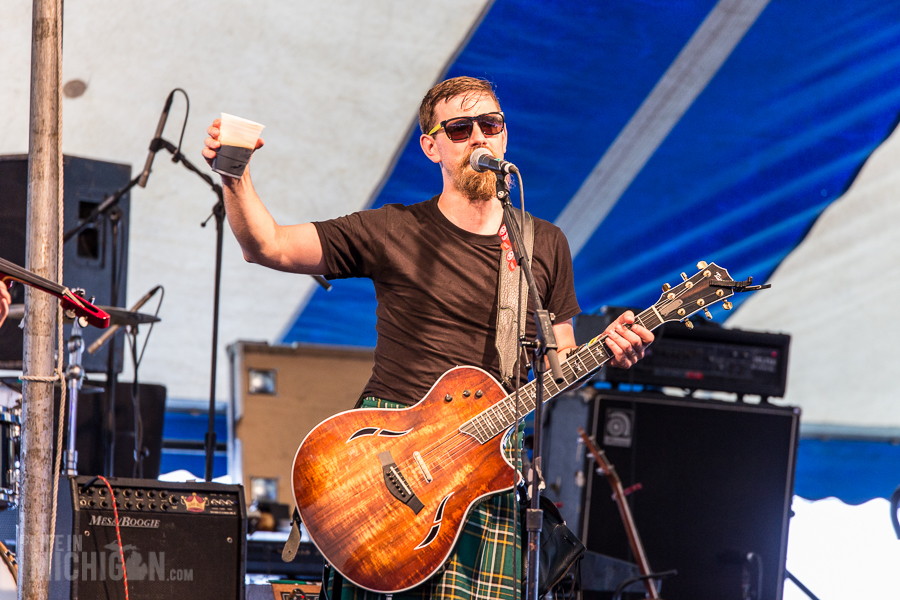 Did you make it out for the Highland Games? If so, leave us a comment or send us a message on what you enjoyed the most. We love to hear your stories. You can check into the gallery for more pictures from the event.