The Iron Fish Distillery Tours are a bargain at $10 a person. Not only do you get a history lesson, a demonstration of their soil-to-spirit process, and a guided tasting of their fine spirits but also a motivational experience.

It may have been the spirits warming my heart, but I came away with a desire to follow my dream. Take a chance and build something for the next generation. Make the world a better place as they say. 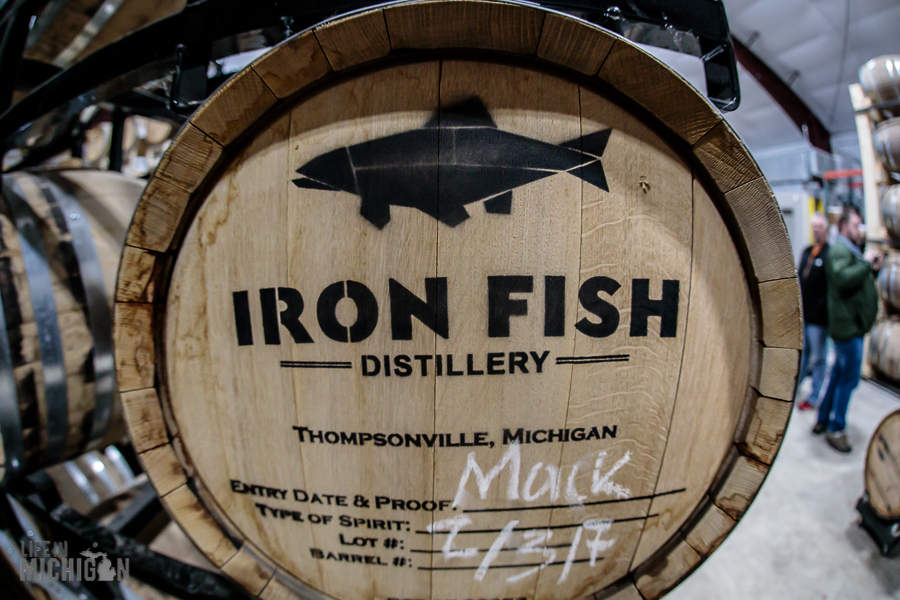 Our Iron Fish Distillery experience started with finding it. They aren’t joking when they say it is “on a back-roads farm!” It had been raining for several days so the roads were a muddy mess. And there was a detour, which we guessed was due to the rain washing out a section of the road. Google had the audacity to suggest a two-track road, which didn’t look friendly. Ay-yi-yi!  A conversation about heading back to Frankfort was happening when we spied Iron Fish Distillery in the distance. I’m pretty sure a small cheer erupted from the car.

The parking lot was full. What the heck? If we’d reviewed the Iron Fish website more closely, we have found directions. Perhaps better ones than we’d followed. 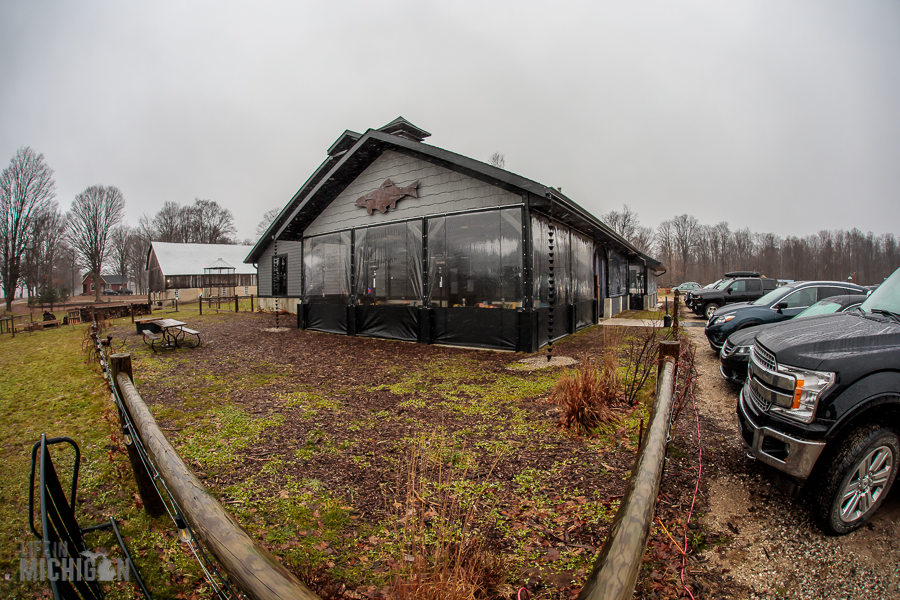 We grabbed spots at the bar and ruminated over the cocktail menu. Decisions. We ordered a Bloody Mary and Coyote Call. Since the tasting room was bursting at the seams, I assumed the tours were sold out. Some days the Gods are smiling down. There were a few spots still available on the next tour. Yes, please. We’d snagged them. (Hint: If you are looking for the cocktail recipes, they are posted on their website. Score!) 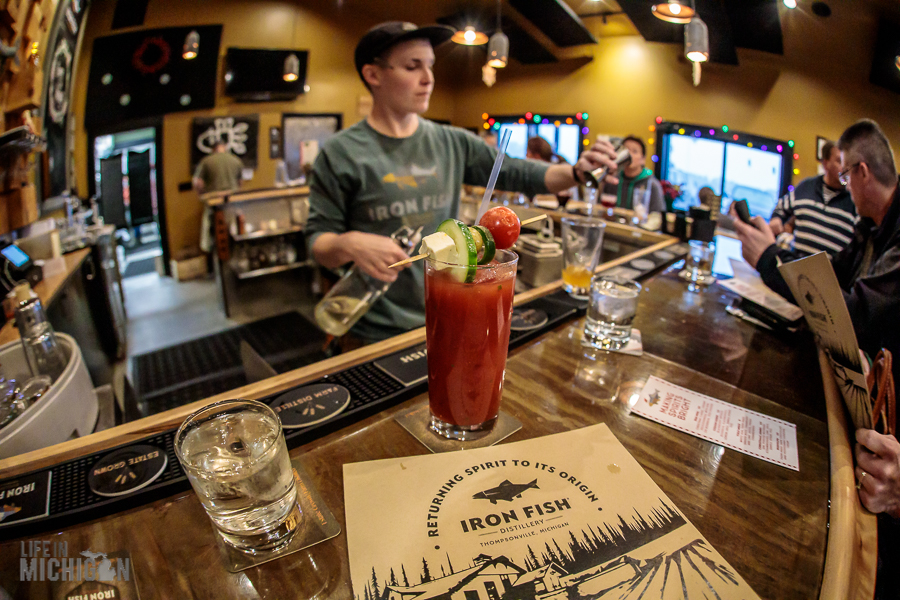 The Gods continued to smile. Richard Anderson, one of Iron Fish’s founders was our tour guide. He quickly apologized and said the regular tour guide was out so we were stuck with him. 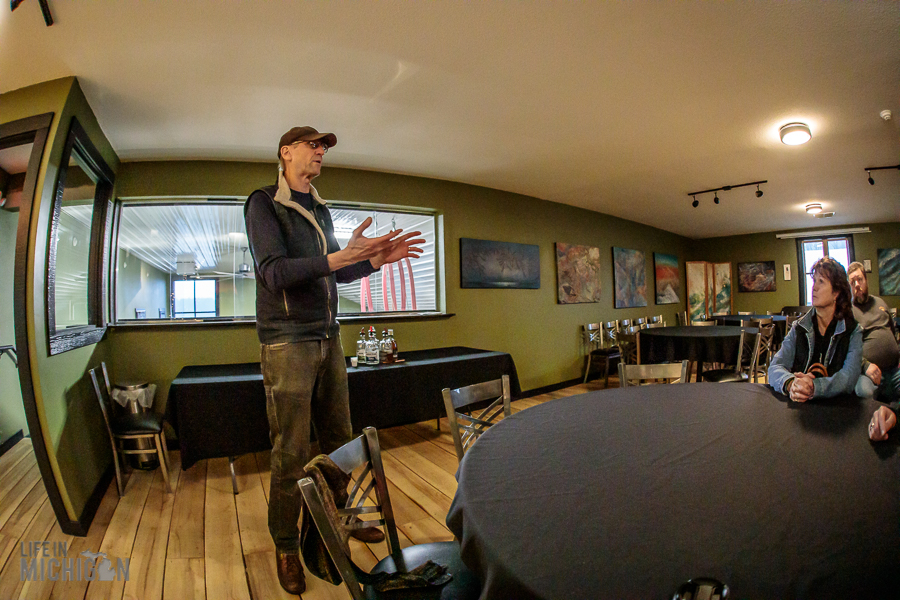 He then pulled out his phone and showed us a picture of an Iron Fish employee on their day-off.

“That,” he said proudly, “is a Steelhead.” Richard went on to explain, If you are familiar with the area, which I was not, you’d know the Betsie River is known for its Steelhead. You may also know Steelhead are also called Iron Fish. The distillery is named after them.

In a Betsie Current article, I found a bit more about the name.

“It was hard to find a name for the business that we could trademark,” Wallace explains. “At some point, we settled on the name of a fish. The iron fish is a steelhead salmon that runs up the Betsie River.”

Wallace also fancied the name, because his hobby is metal artwork—the metal fish logo behind the bar at the distillery is his creation.

“You could actually substitute ‘whiskey’ for ‘steelhead’ in terms of the spirit and nature of the fish,” Wallace goes on. “Catching a steelhead is the epitome of catching a fish. They are prehistoric and beautiful.” Like fine, aged scotch. 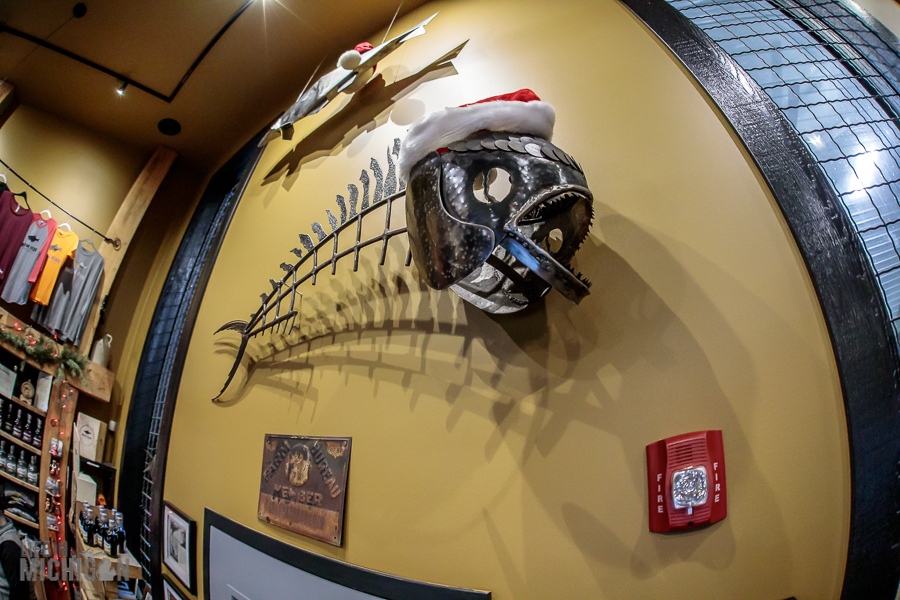 Richard Anderson, along with his wife Sarah and his good friend, David Wallace and his wife Heidi Bolger founded Iron Fish Distillery in 2016 after a trip to Scotland. (More about that soon!) But first, you have got to see this great picture of them on Instagram celebrating in Lansing when they were named one of the 50 CompaniesTo Watch in Michigan.

Iron Fish Distillery is located on a working farm in Thompsonville, Michigan not too far from Crystal Mountain. The farm was one of Michigan’s original farmstead properties and settled by George Chamberlain in 1887. His son Victor and his wife Martha ran the farm until his death in the 1990’s. Richard offered to show us where the original still was located. Yes, the Chamberlains kept an illegal still during and just after Prohibition. The original still is long since gone. Sold to metal scrappers most likely.

Long story short, after Victor passed the family couldn’t continue to operate the farm. It remained fallow for a number of years. In 2011, David and Heidi purchased the Chamberlain farm but didn’t have a plan for it. They just knew they wanted to preserve it. A section had already been sold. Who does that? Just buys a farm. I’m trying to imagine Chuck’s response if I suggested we buy a farm. I can’t; that is how foreign the idea is to me. It was obviously a brilliant idea. Their retirement is looking far more secure than my stock portfolio.

I mentioned a Scotland Trip earlier and I promised to share more about it. In 2014, Sarah sent Richard and her brothers-in-law, David Wallace and Craig Maxwell on a scotch tour of Scotland to celebrate Richard’s 60th birthday. In a December 2018 Crain’s Detroit Business article, Richard and David are quoted as saying:

On our second or third day, we’re standing in front of these beautiful Scottish stills and I said to Richard, joking, ‘We could do this in Michigan,'” said Wallace. “The more we talked about it, the more I liked it, but as soon as we got on the plane back home, I forgot all about it.”

I’ll admit, touring Scotland is life-changing. Chuck and I’ve made the leap across the pond several times. In fact, this past May we toured the Scapa Distillery in the Orkney Islands. Never once did it occur to me to open a distillery when I got home.

While sharing with the tour group the Scotland story, Richard said with a hint of laughter in his voice, “Wallace called me one day and said, hey remember our conversation about the distillery? I just put down $10,000 on a still. We are going to do this. I said, I better tell Sarah.” The tour group all laughed. Not only is this guy smart but he is also funny!

With the history lesson behind us, we made our way to the distillery for a demonstration of the soil-to-spirit process. 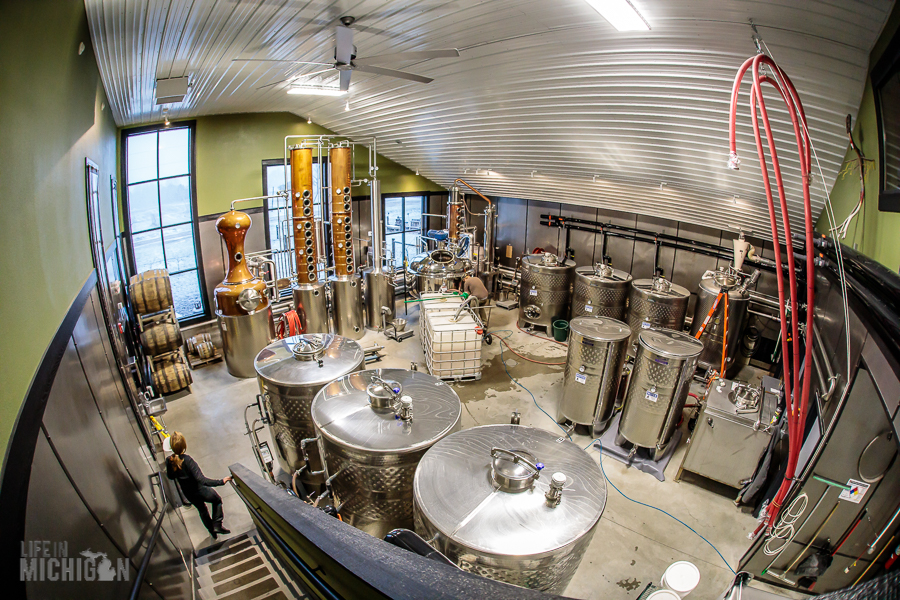 What exactly does that mean? Soil-to-Spirit? I found the best explanation the Iron Fish Distillery website.

Every step of the process – from growing and harvesting non GMO grain to cultivating native yeast, milling, mashing, fermenting, distilling, aging and bottling – is done by hand at our distillery. We replace global with local wherever we can, with the highest standards along the way.

The first stop in the distillery was a tiny room. It was built to house the mill. I didn’t know this but milling wheat and barley generates flammable dust which doesn’t mix well with ethanol which is produced in the production of spirits. Yikes! But don’t worry, that is the reason for the special room and the alarms to monitor the ethanol. 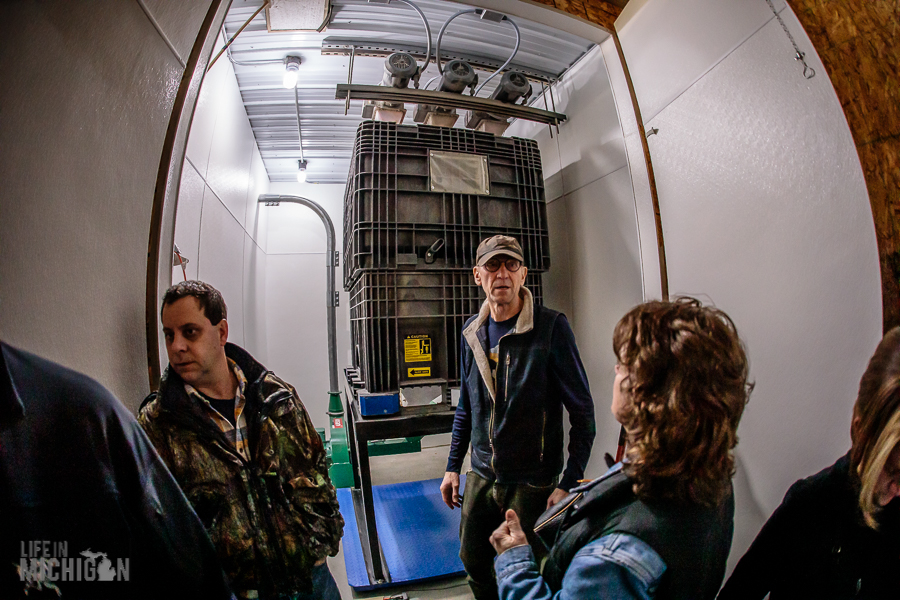 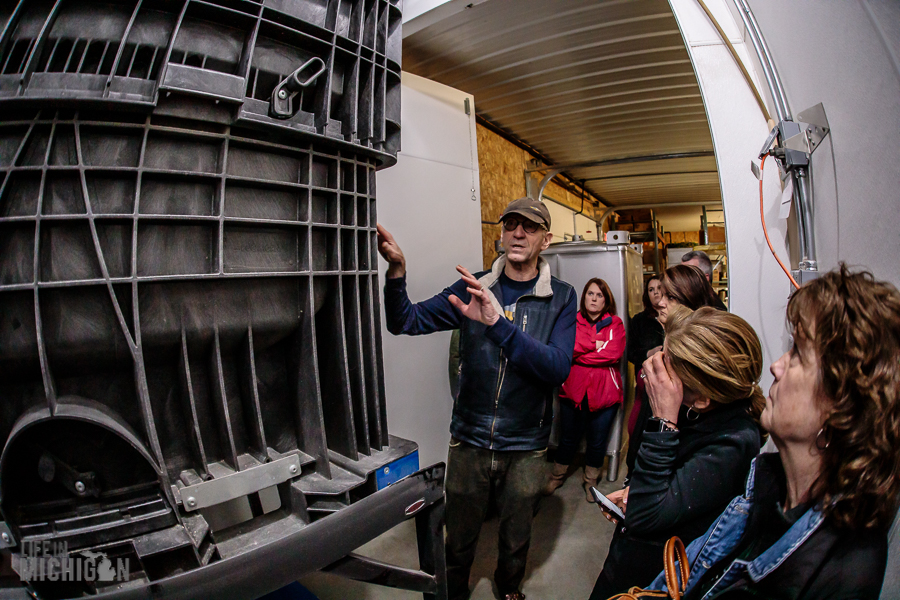 Now add water to the grain. It was at this point in the tour, Richard shared a funny story. It went something like this, “My son thought we were crazy. Who is going to make the whiskey? It was a good question. But lucky for us, Dan Krolczyk stopped by the farm to sell us some grain and brought along a baby-food jar filled with rye whiskey he made. We tasted the whiskey, problem solved. We’d found the distiller.” 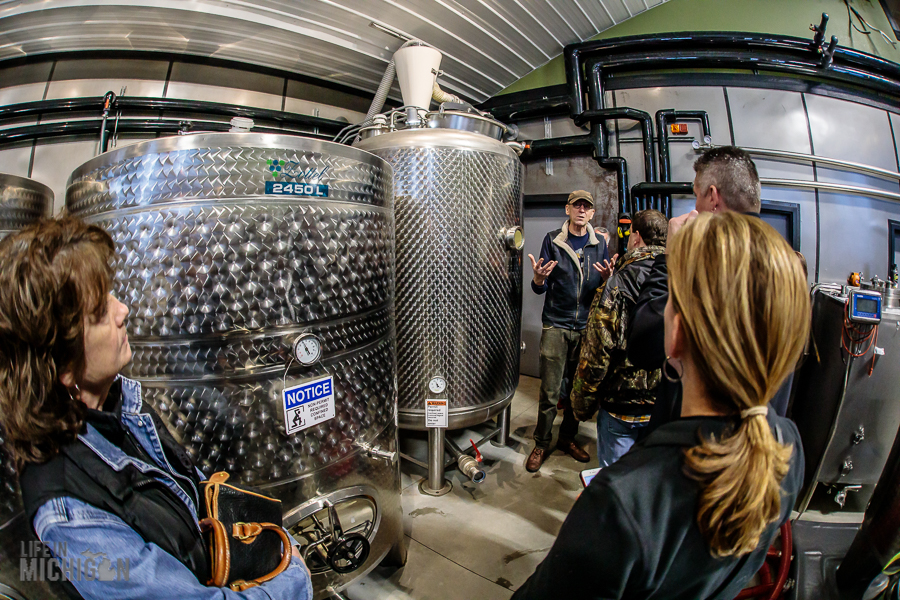 Eventually, in the distilling process, you get rid of the sulfur put out by the fermenting yeast. The ideal way is to put it in contact with cooper. They’ve named their stills, but you need to take the tour if you want to hear the back story! 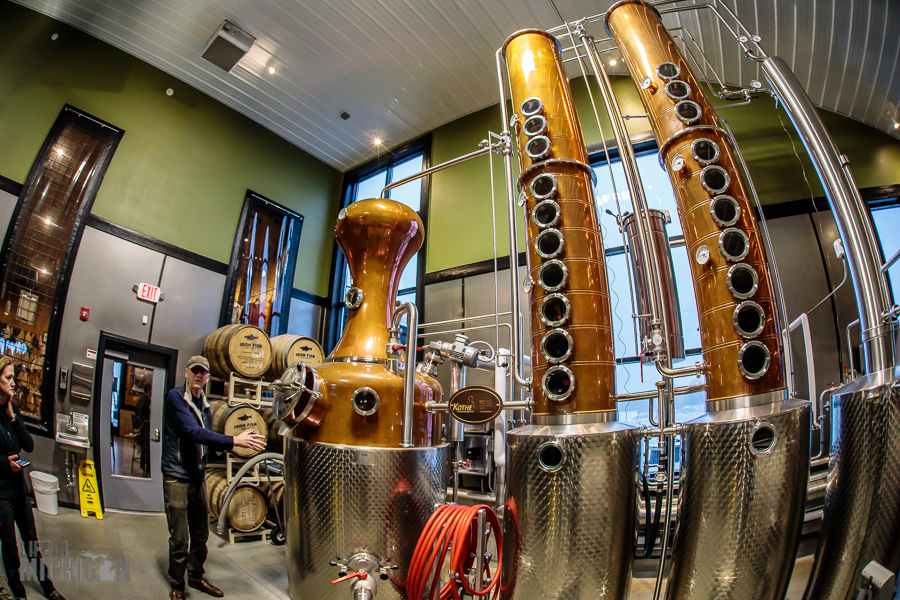 A Rickhouse is a warehouse where barrels of whiskey are stored in ricks. Sounds like a sentence from a Dr. Seuss book.  A few fun facts I learned while touring the Iron Fish’s Rickhouse. 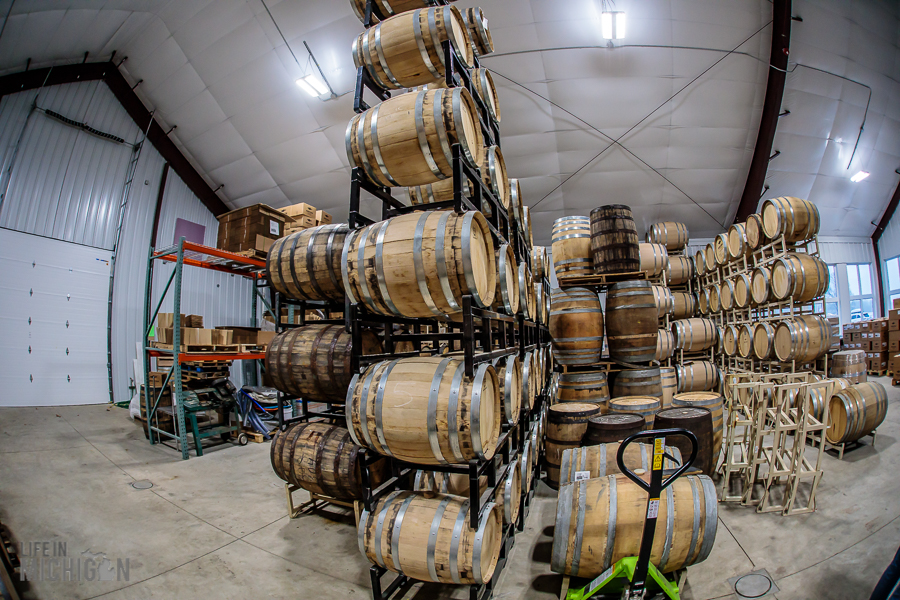 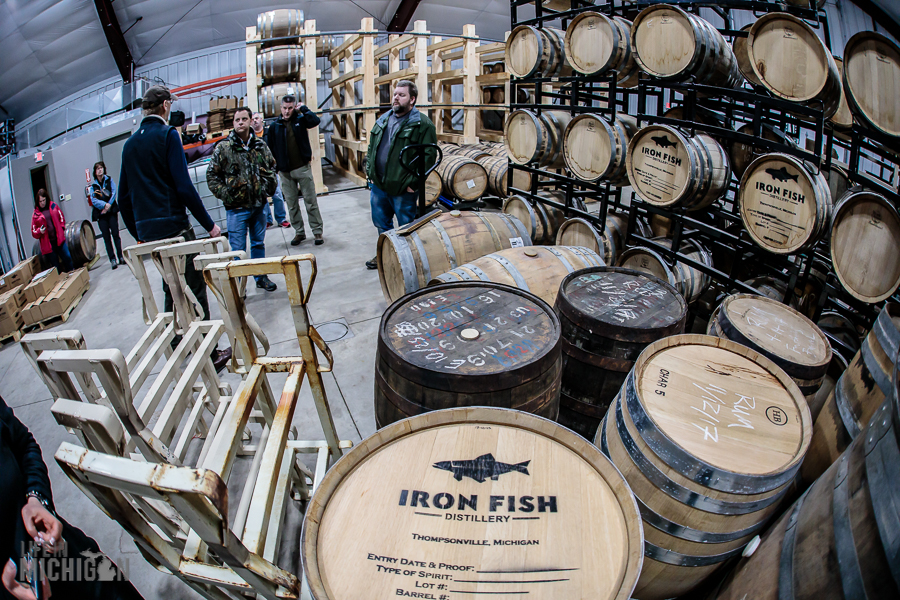 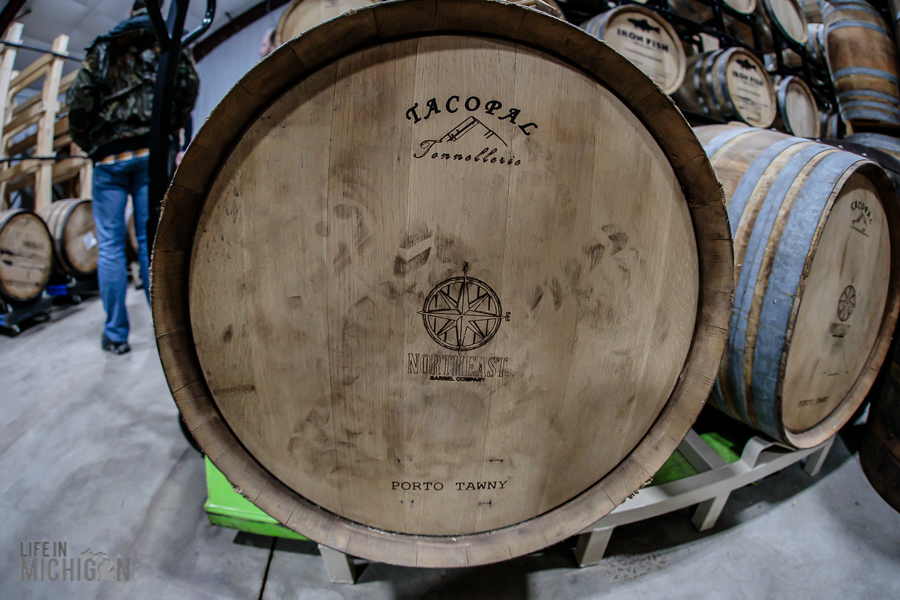 The tour concluded with a tasting. I appreciated Richard providing a few tasting tips. 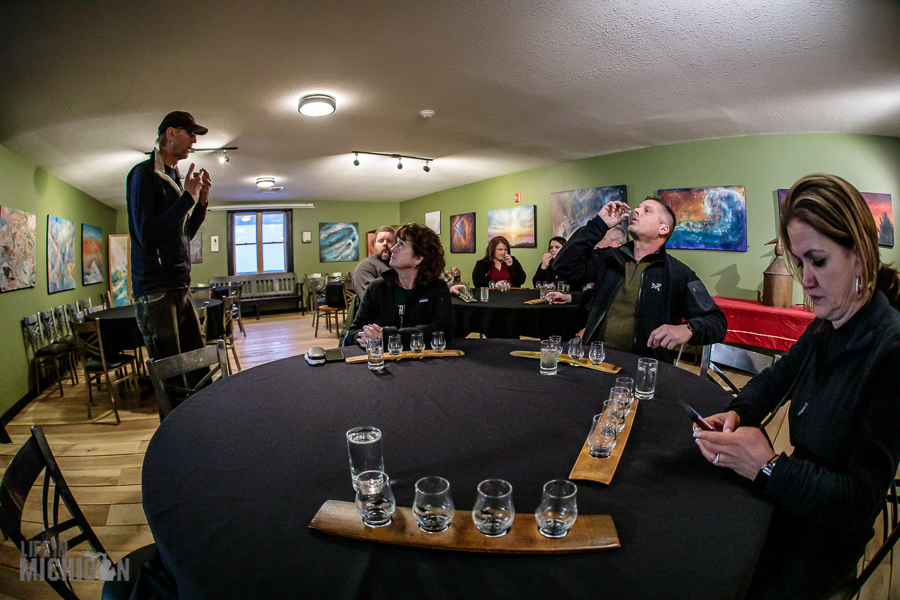 In addition to the vodka, gin, and whiskey we tasted their barrel-aged maple syrup. Plus we took home with us a tasting glass.

So what was all the mumbo-jumbo at the beginning about coming away with a desire to follow my dream, taking a chance and building something for the next generation? The Iron Fish Distillery founders are walking the talk as they say. They are taking care of the land and making Michigan a better place to live and work. The first thing I noticed was the gender-neutral restroom signs. I thought to myself, Nice! Well done. Then I read they are working with the Michigan State University Extension to adopt farming practices to protect the land and the groundwater. This is an inspiring business that seeks to give as much as they get. Plus I really love their gin!

Log in
to use Ginger
Limited mode
started with