Our chant, “Open, Open, Open” kept time with the sleet hitting the windshield while we waited in the car for the for Lake Ann Brewing Co to open. Our chant worked! Not only did the doors open but we got a very special treat. 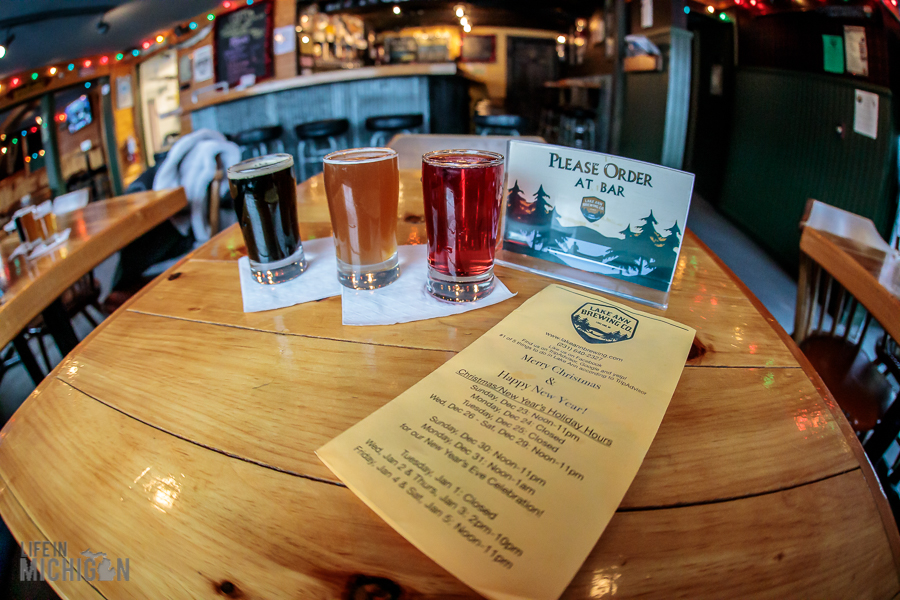 Our plan was three days of snowshoeing and exploring the delights in Michigan’s Leelanau peninsula over the Christmas Holiday. Chuck had curated a list of trails, breweries, historical sites, and nature areas. Unfortunately, the rain put a damper on almost all of it except for the breweries, which made for a nice LeeLanau Peninsula Beer Tour. Turns out the Point Betsie Lighthouse and Grand Traverse Lighthouse were both closed. The rain had melted all the snow and looking for eagles in the rain is no fun.

That is why we were impatiently waiting outside the Lake Ann Brewing Company on a Thursday a few minutes before noon. We were sick of the rain and a bit worried they wouldn’t open until 3 pm. But exactly at noon, the open sign glowed brightly welcoming us. 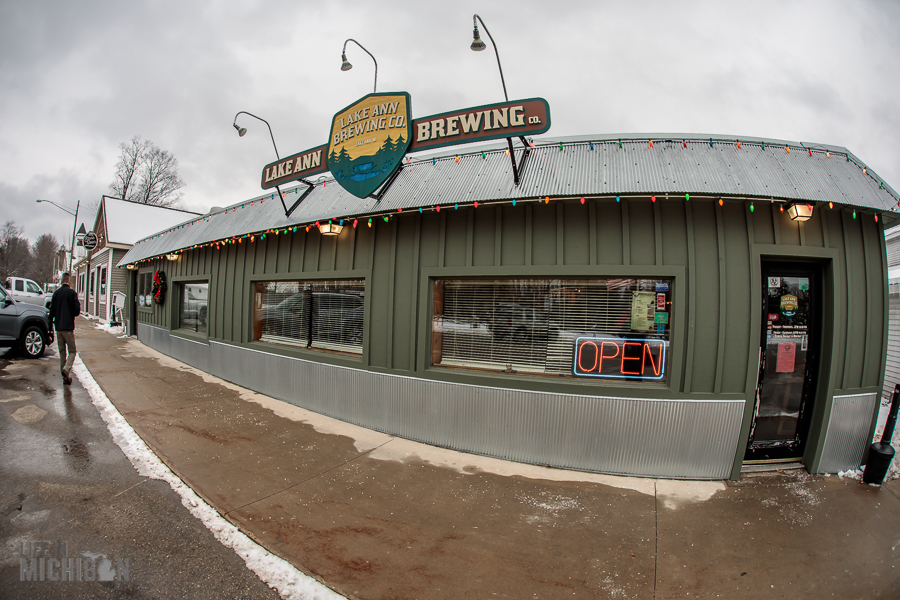 Our plan was to grab a beer and a bit of free WiFi to research a new plan. We slid into the church like bench along the wall and found a thread to the internet. 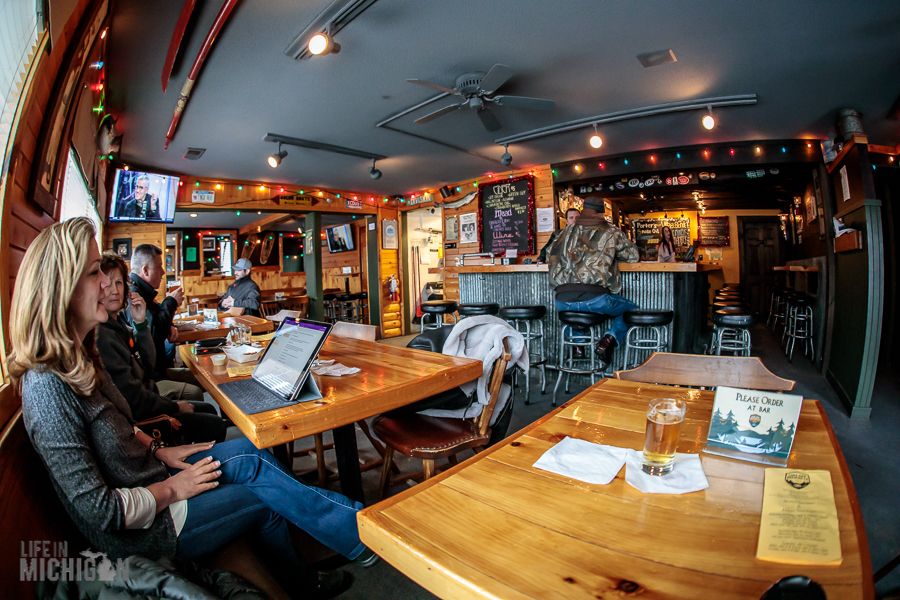 “What is this the last supper?” Matt Therrien said without preamble as he burst into the place like he owned it. He stood across from us with a questioning grin on his face. It took me a second to get the joke. Within about 3 minutes, we were all old friends; although I’m sure Matt couldn’t remember our names if you asked him. But that is exactly the kind of place that is Lake Ann Brewing: friendly, welcoming, unpretentious.

Several times Matt described Lake Ann Brewing as a U.P. Bar. We looked around and shook our heads in agreement.

We are the meeting place where people come to hang out and drink beer, he continued. Before we opened there was no bar, no brewery in Lake Ann. The first couple of weeks was crazy. The locals weren’t use to craft beer with a higher ABV. Our first Blonde was at 5.7% but now our Village Blonde is at 4.8%. The description on the menu describes it as “A great lawnmower beer for the hooplehead in all of us!”

It took very little to encourage Matt to share his story. I can’t remember if we even asked a question but as they say, “It was pure gold, Jerry!” 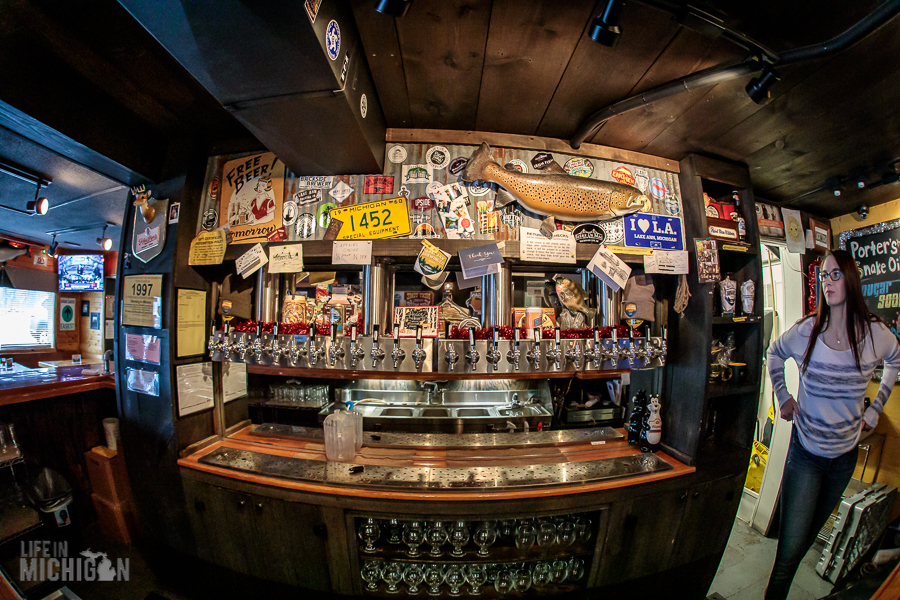 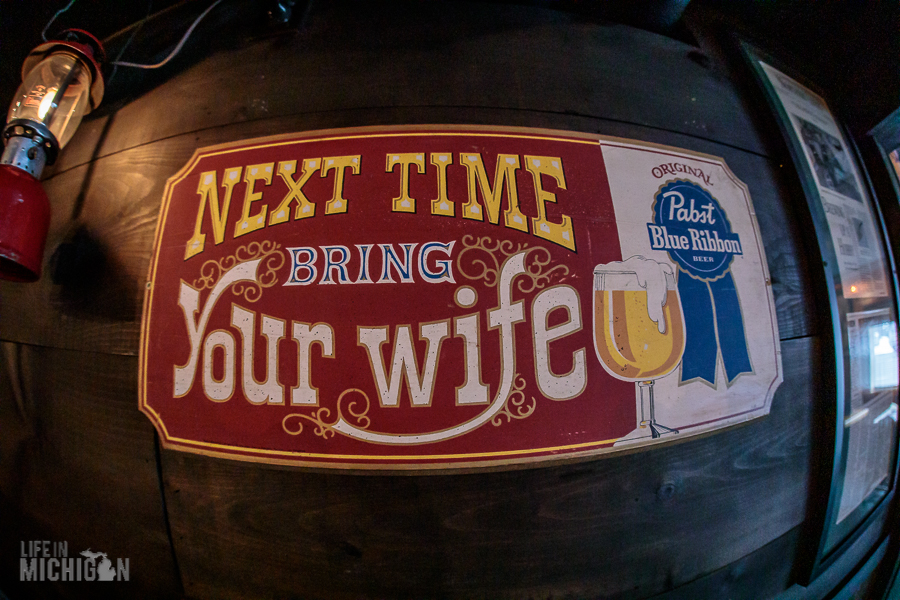 The building where the Lake Ann Brewing is located sat vacant for a number of years. The bank owned it. Matt started his tale of purchasing the building with a question, “What if I just got it so cheap?” Matt grinned as he retold the story. “It was listed $99,000. I offered $15,000. They countered with $85,000 and I countered with $18,000. I finally got to $45,000. We finally settled at $55,000.” He shook his head as he said, “I sometimes see the person from the bank around town who I negotiated the deal.”

If Matt ever decides to sell his brewery, he’d make a great stand-up comedian. He was on a roll.

The barmaid asked, “How come I’ve never heard this story?” Without missing beat, he replied, “You never asked.” His daughter who’d arrived to collect her father joined the audience. I don’t think it was the first time she’d heard the story, but she settled in to enjoy the show. 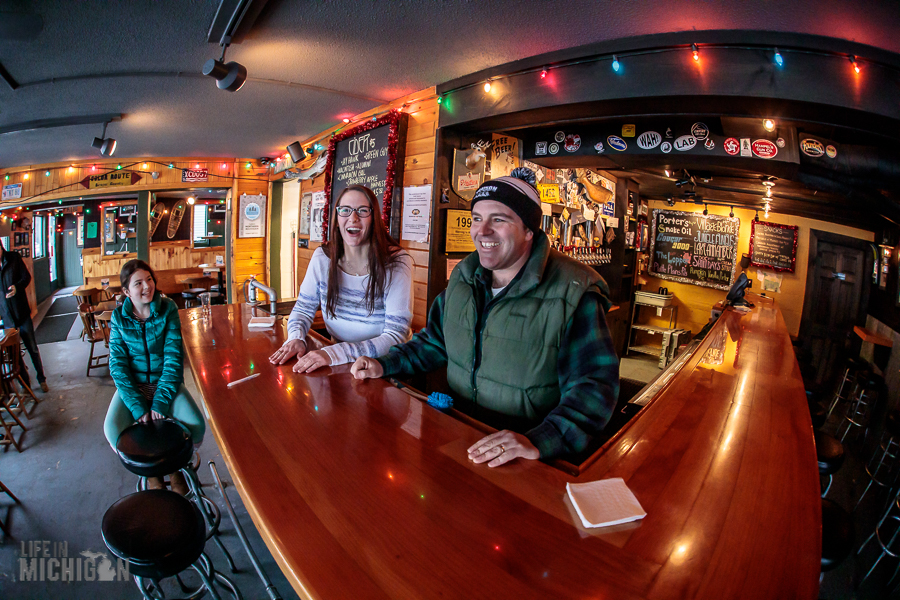 There was lots of natural wood but I had a piece of crap as the canvas, he said. The building was a cafe, not a bar. I consulted with others like the owner of the Rare Bird in Traverse City. We all shook our heads like we knew the owner too. We didn’t, but during our Grand Traverse Bay Beer Tour in 2015 we visited the Rare Bird.

Matt said, “the floors were of much discussion. They don’t make me any money so I said I don’t care about the floors.” All of us looked at the floors. “Or the ceiling,” Matt continued. He challenged us with, “How often do you look at the floors or the ceiling when going into a brewery?”

Now that he pointed it out, I look at the floors and ceilings of almost every establishment I enter and make a quick assessment. 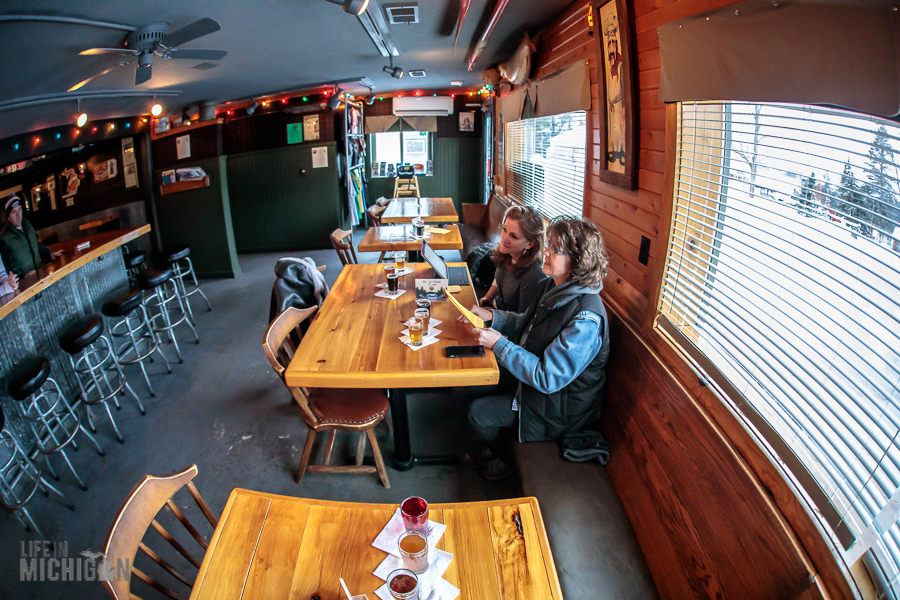 The comedy show had turned into a private tutorial for opening a brewery and he was on to the bar stools. “I got the bar stools from Union Street Station. I offered them $200 for a whole trailer of them.” Matt was talking ultra-fast at this point, I think he got 57 of them and had to buy new bottoms. I asked for clarification but he’d moved on to the importance of backless bar stools. “I wanted a cozy bar atmosphere,” he said. You can get more bar stools along the bar if they don’t have backs! Another detail I had no idea you needed to consider.

“And do you want to know the secret to opening a brewery?” he asked. Well, of course, our encouraging nod implied and waited for Yoda to share the secret of the force. “Open it next door to a restaurant and have them serve the food,” he said. (FYI: Lake Ann has snacks on their menu, like salted, roasted in-shell peanuts. If you want something else, ask the server for the local restaurants’ menus. The Stone Oven is next door. They deliver right to your table.)

The friendly people at the next table even offered to share their pizza with us. It’s that kind of place! 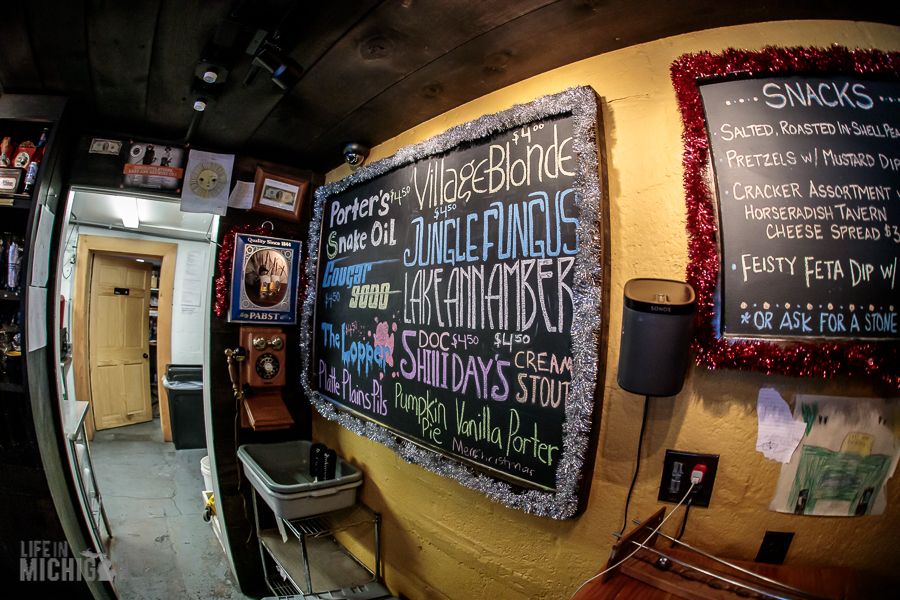 Hey, Matt said. Lake Ann Brewery is #1 of things to do in Lake Ann per the Trip Advisor. Cow tipping is #4. Clearly the comedy is endless at Lake Ann Brewing.

We mumbled something about our next stop, Hop Lot. A huge grin spread across Matt’s face before he asked if we’d like to hear one more funny story about a large bachelorette party who stopped at Lake Ann Brewery. They too were headed to Hop Lot. Matt made each of them a coupon for a free imperial stout from Hop Lot. We asked for a coupon but he declined making us one. But that didn’t stop us from asking the friendly staff at Hop Lot if they’d honor a coupon from Lake Ann Brewing. Their response was quick, “No. You’ve been talking to Matt apparently?”

Add Lake Ann Brewing to your next beer adventure. You might catch the comedy hour with Matt. If you don’t they’ve got great beer, hard cider, mead, wine. They offer live music year-round and during the summer I hear their patio is hopping.