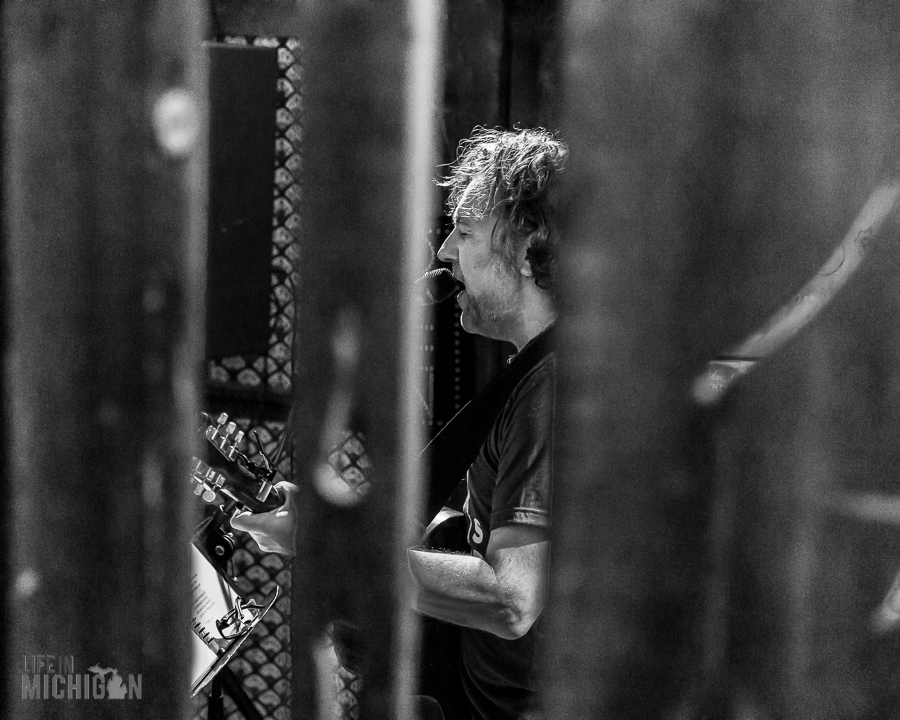 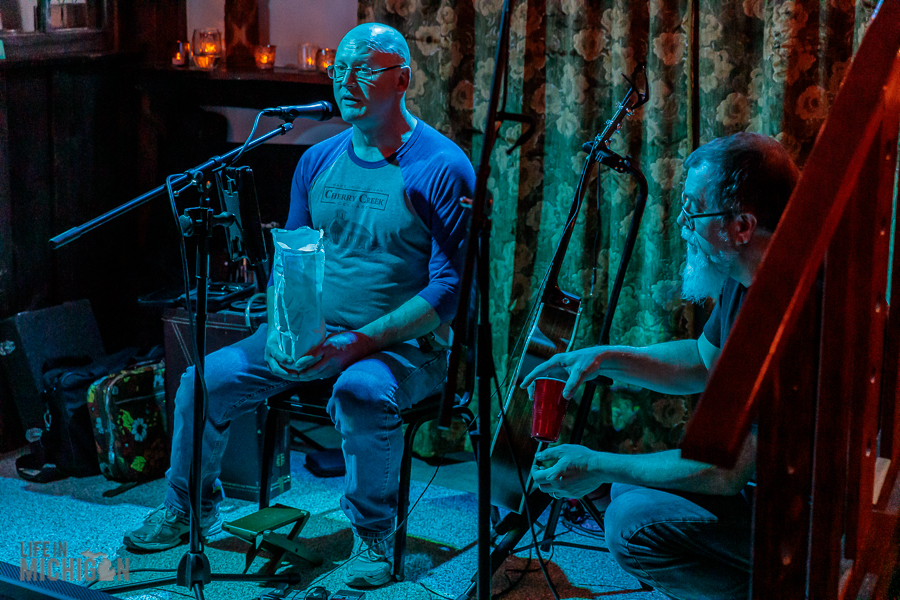 John Mooneyham and Steve Girbach are stalwart promoters of local music. They have joined forces to give their hometown of Manchester a unique and intimate musical experience with the Manchester Underground Music and Art series. This new monthly music series transforms the lower level of the Shoppes of Alber Mill into an intimate music venue. The maiden voyage of Manchester Underground Music and Art features Jim Roll and Carol Gray. 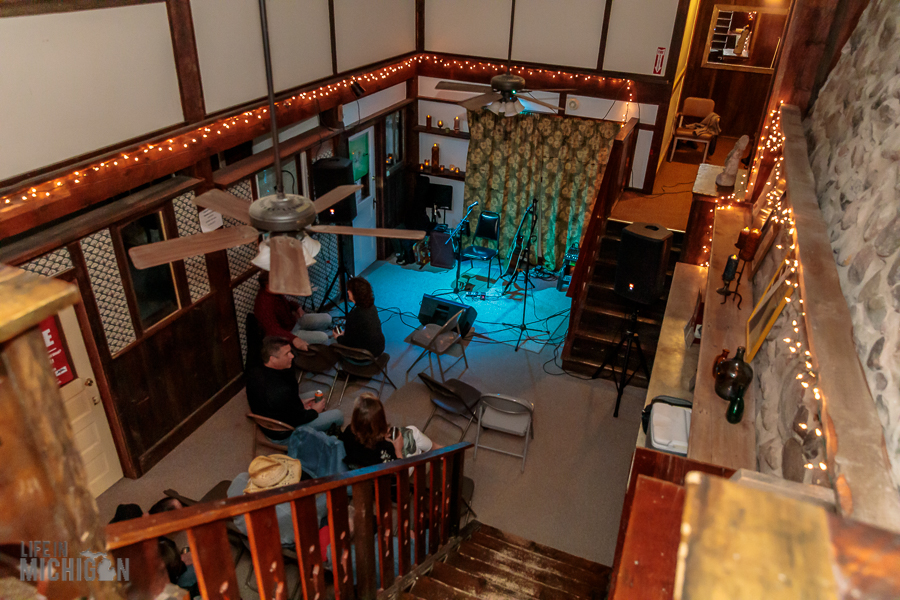 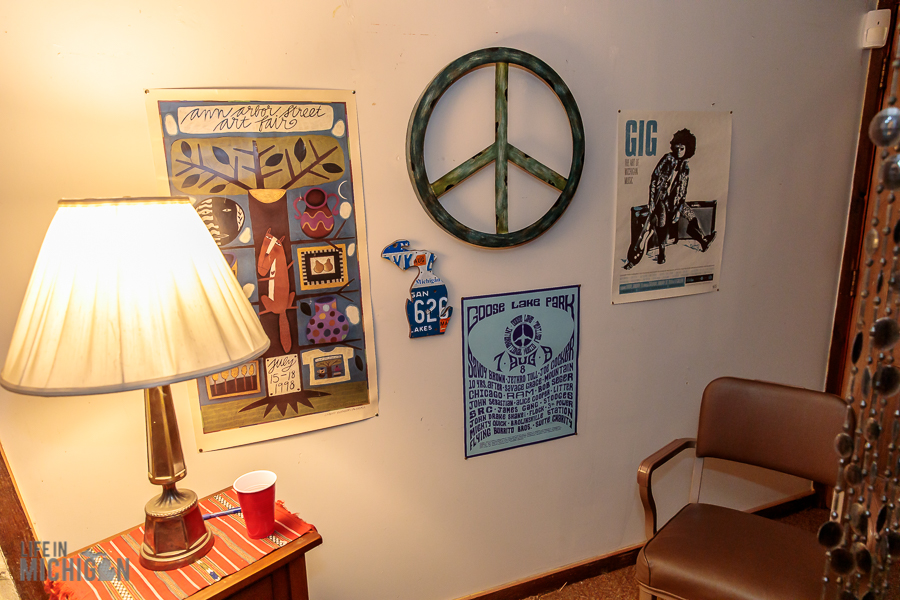 Before we get into our recap of this wonderful night of music in Manchester, we need to explore this unique space. A vibrant air of community envelopes us as we are greeted at the top of the stairs inside of the Shoppes of Alber Mill. As we made our way down toward the stage, we marveled to see the GIG poster on the landing. There are balcony seats available on the landing or you can grab a chair at the main lower level. Hell, if you want, you can sit on the steps. Steve and John didn’t want anyone to go away hungry, so they had plenty of fresh popcorn and even some pizza in the backroom. 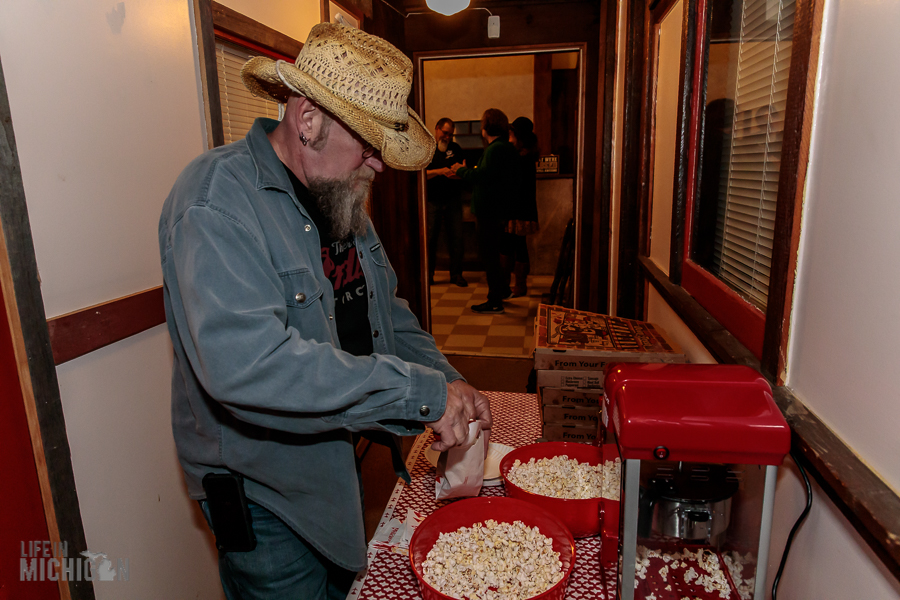 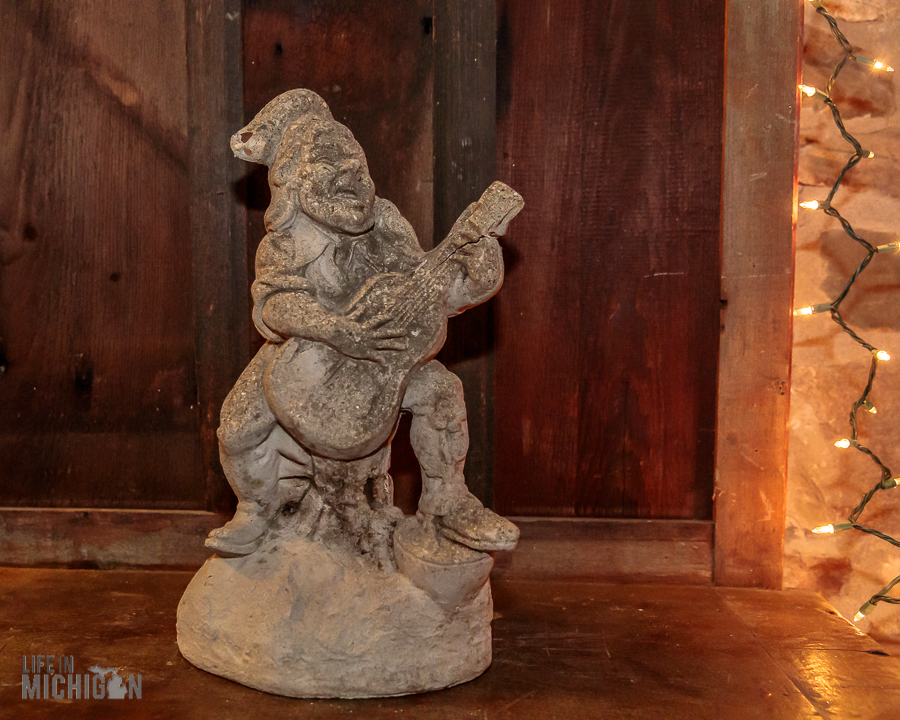 Our evening of music starts off with Cooper Young from Jackson. Cooper’s rich baritone to bass vocals meandered between Leon Redbone and Jack Johnson. Meanwhile his guitar spoke with bluesy undercurrents of American highways. Cooper’s originals had a voice that imbued ragtime and gypsy jazz with a healthy coating of delta blues. He reached way out with an extraordinary and fun cover of “Brand New Key” by Melanie. Cooper Young put on a fine show featuring some nifty guitar playing. 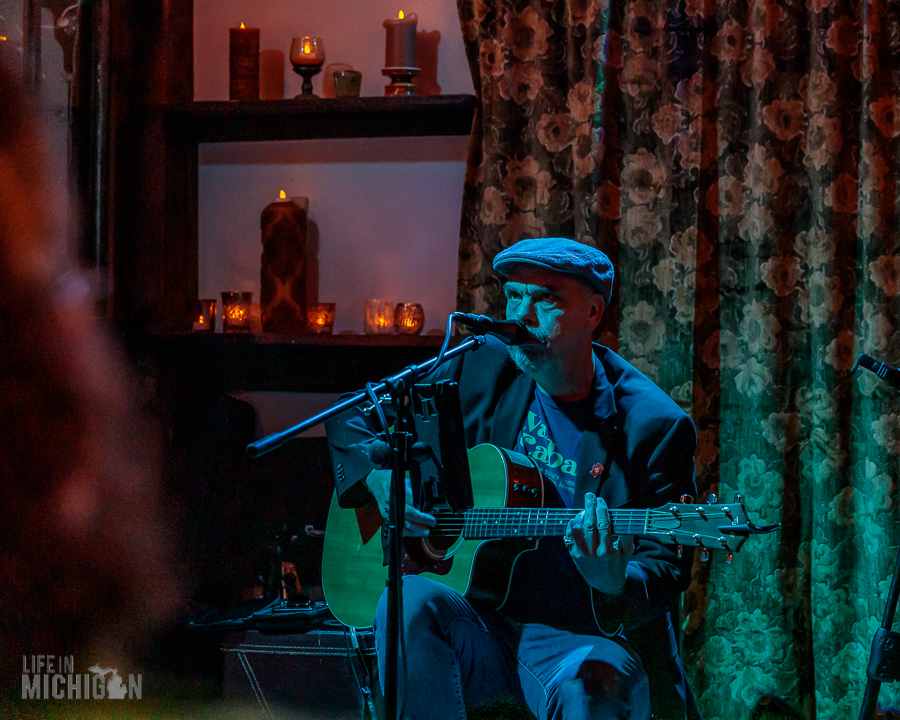 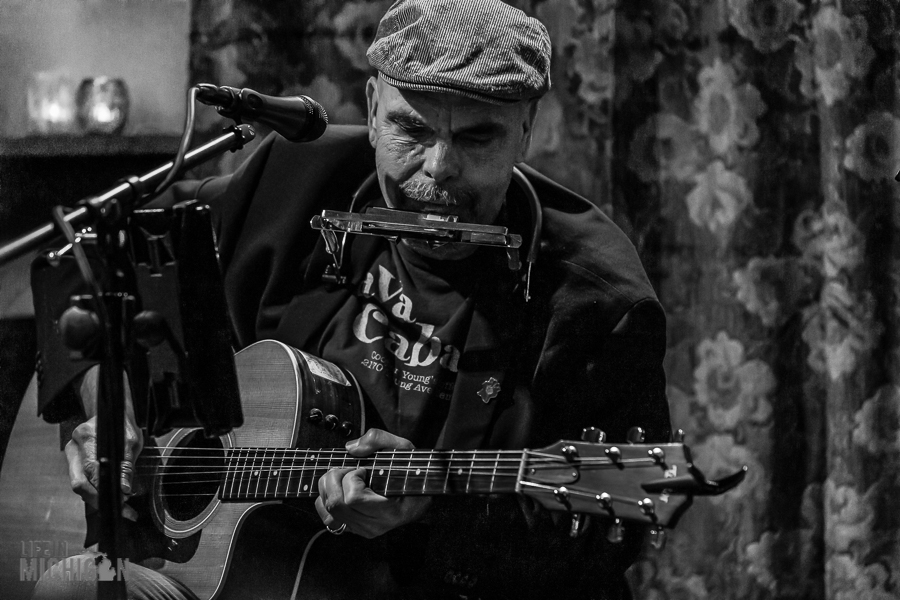 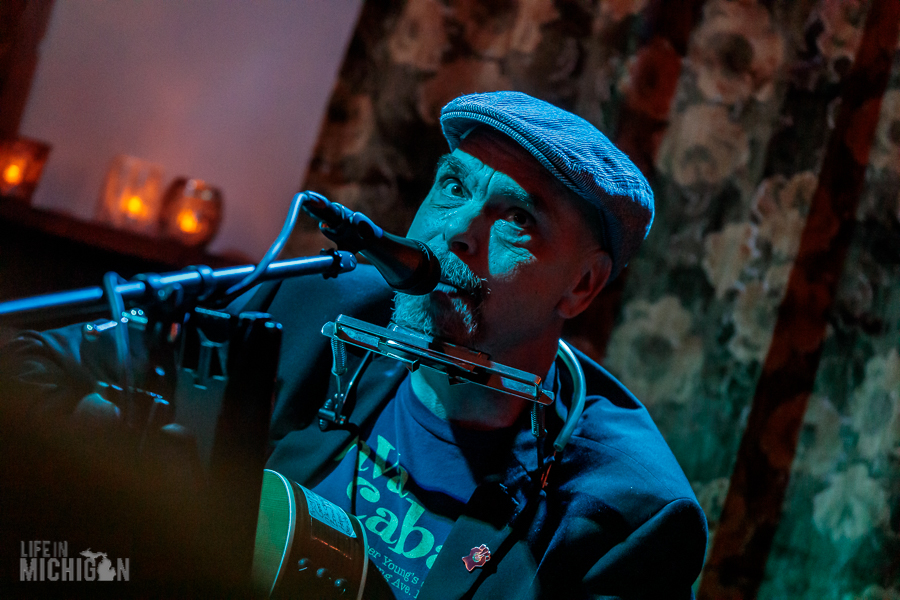 Many people may associated Jim Roll with recording such great local acts as Frontier Ruckus, Chris Bathgate, Fangs and Twang, or Chris Buhalis. You may also know Jim from playing bass in Misty Lyn and the Big Beautiful. Beyond all that, Jim Roll is an exception songwriter who crafts insightful stories and puts them to music. Jim has been doing a series of shows with a full band that is a bit of rock and folk. Our treat for the evening is Jim is playing an acoustic set on a sweet Gibson guitar. Joining him on the stage is the delightful vocalist/actress Carol Gray. 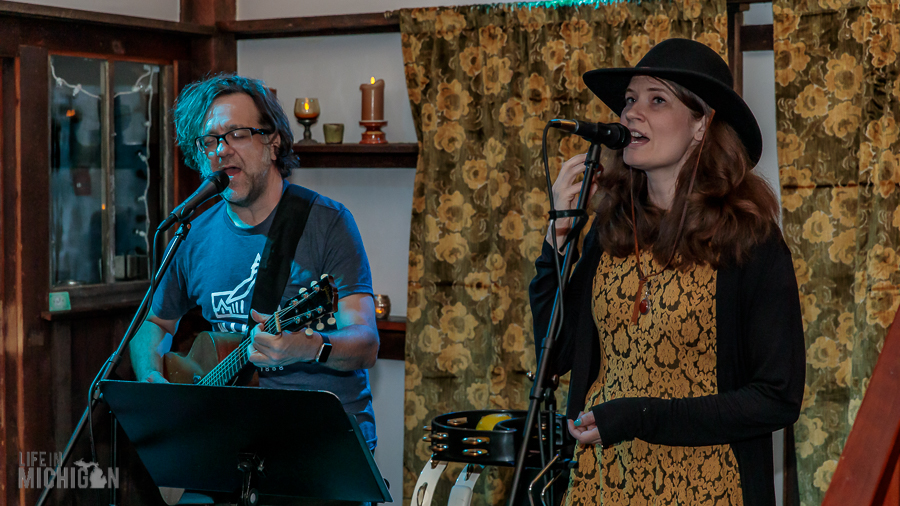 I had the distinct sensation of relaxed comfort and good humor during Jim’s performance. It could be the casual rec-room feel of Manchester Underground Music and Art. Or when casting a glance, seeing the contented faces from the balcony, stairs, and chairs lit by the music. It may also be the soothing ease exhibited by Jim and Carol as they took us on this journey. 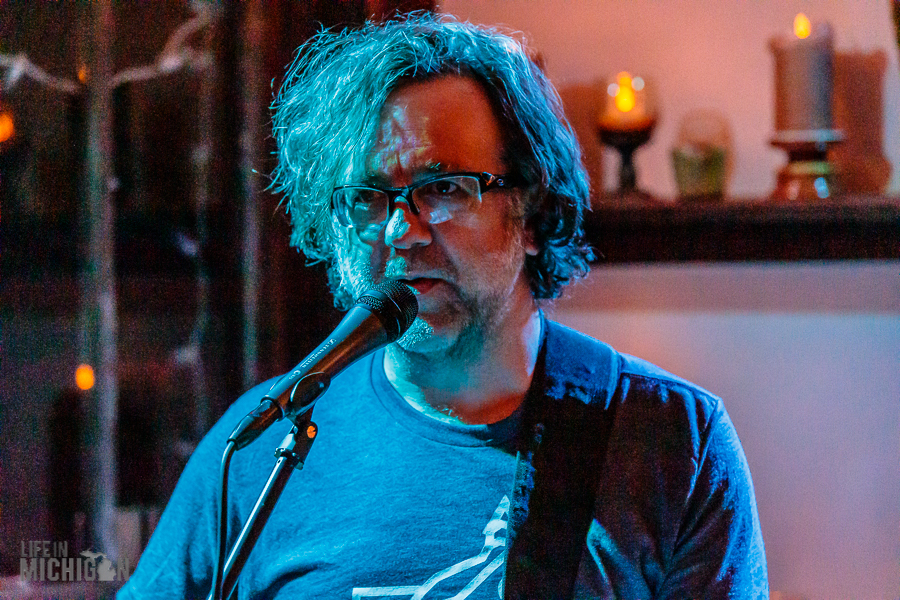 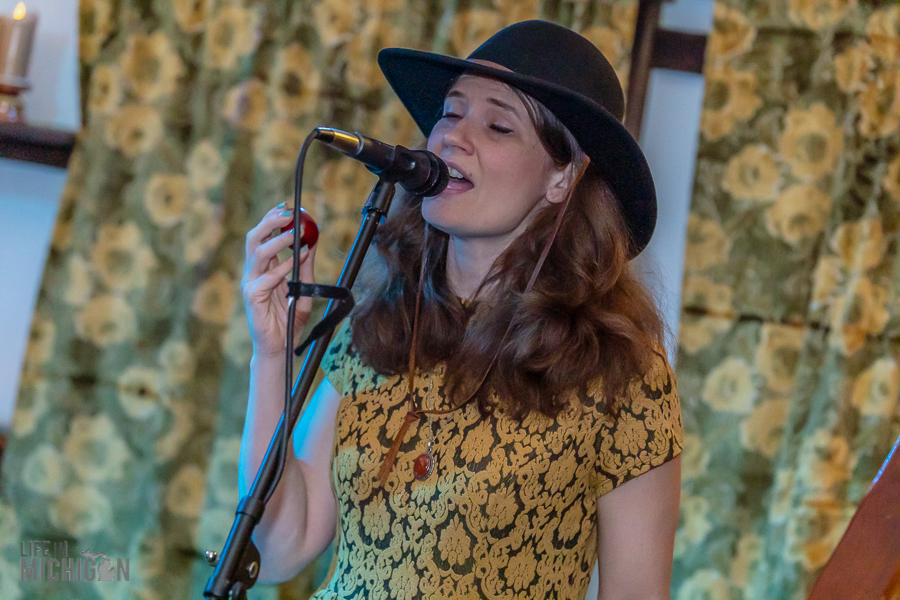 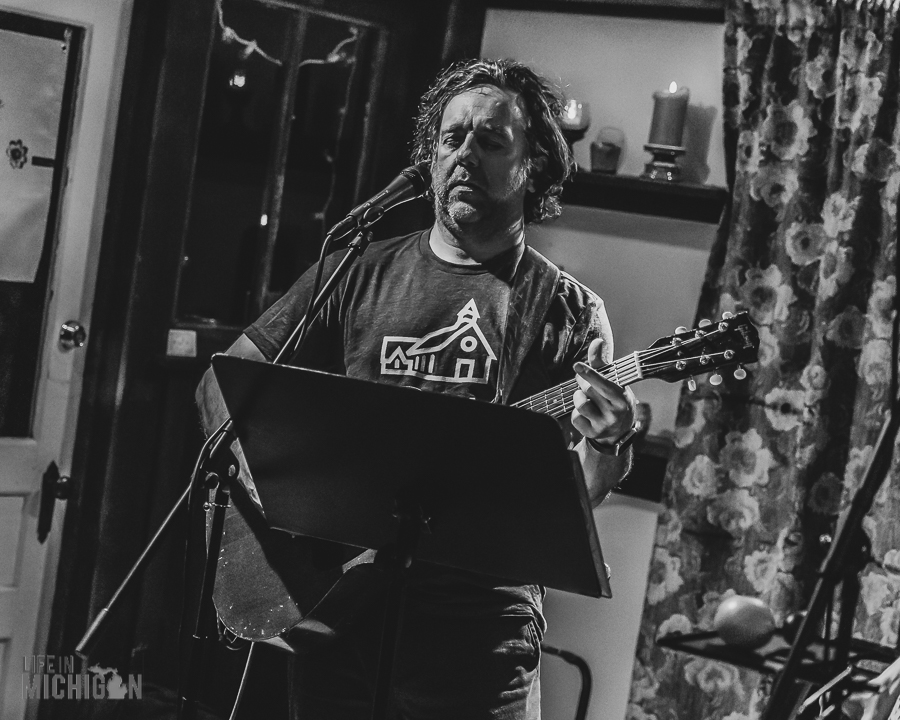 While the entire set from Jim Roll’s show at Manchester Underground Music and Art was entertaining, a few songs stood out. “Eddie Rode the Orphan Train” tells a harsh story of an unwanted boy sent to Arkansas on an orphan train. His young life was hard and thankless, yet he never let it show. Instead he gave his own family love. Jim Roll’s song called “Lunette” is about the face of the moon. He relayed a story of touring in Europe where he was told that “lunette” refers to the little room or bathroom. Talk about a laugh out loud story. 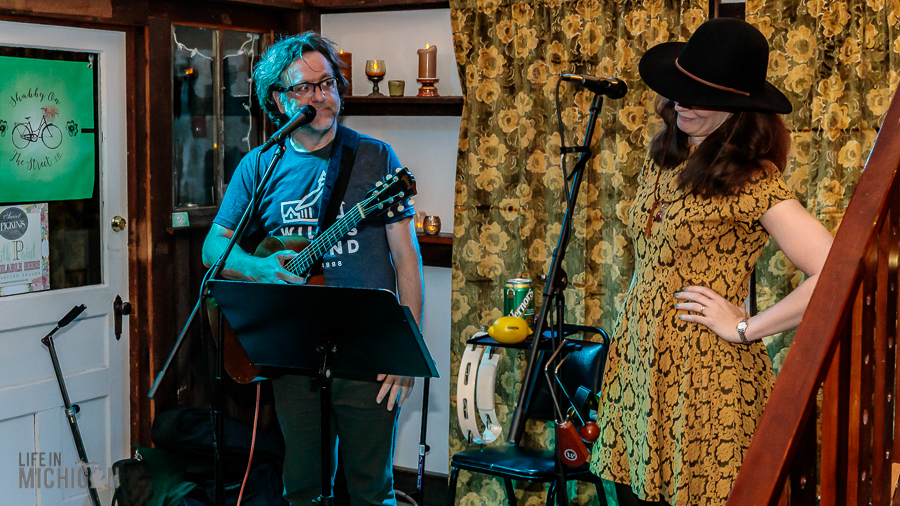 With a little encouragement from Steve Girbach at the end of his set, Jim and Carol came out for one last encore song. I’ll be honest; I didn’t write down the name of that song. I was caught up in the sight of everyone looking thoroughly pleased with a great night of music. The Manchester Underground Music and Art series is happening each month in the lower level of the Shoppes of Alber Mill. You can keep up with the series dates and times on their Facebook page. If you aren’t into Facebook, then get on the email list at undergroundmusicmanchester@gmail.com 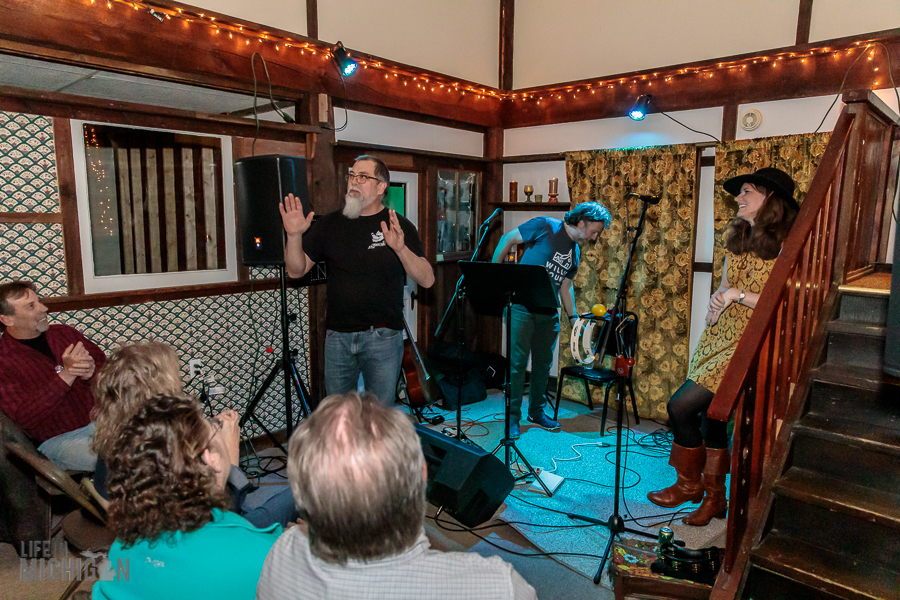 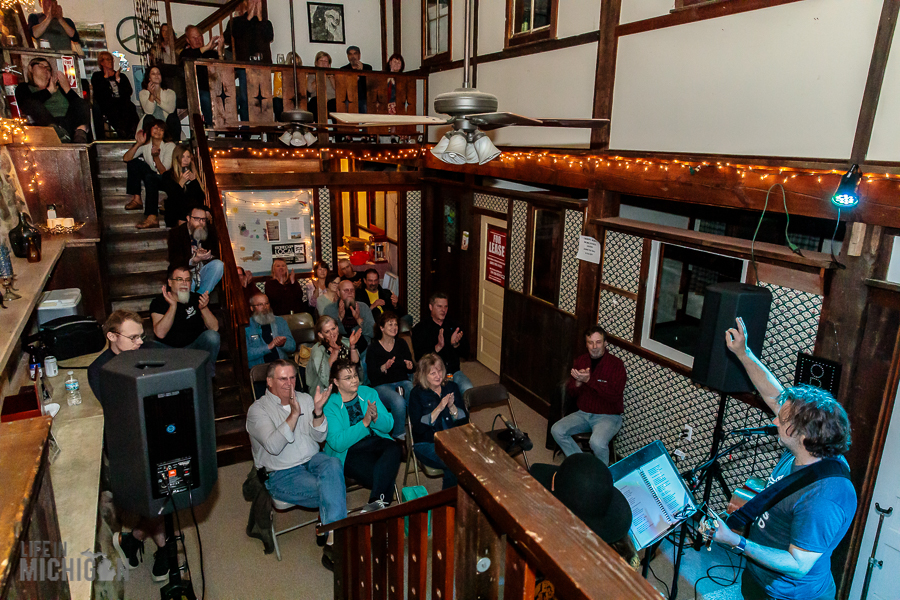 Yes, there are more pictures in our gallery. Please take a look and share on social media. We only ask for a photo credit.