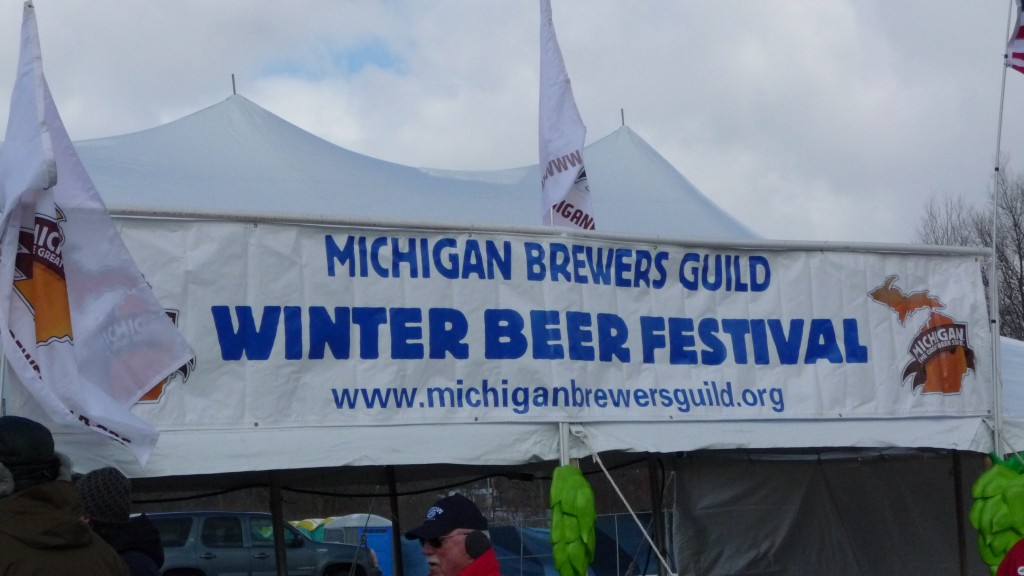 I’ve not always been a beer fan and I’d have to say I’m still more of a fan of the culture than beer. This was my 3rd Winter Beer Festival and the Michigan Brewers Guild’s 7th.  Over 6,000 tickets were sold this year and in record time.  It was the largest crowd to date.

Part of the the charm of the Winter Festival is the weather. 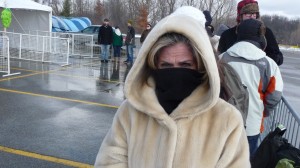 Rain or shine, sleet or snow the festival goes on. This year WIND was added to the mix. I have got to say, I was not a fan of the wind.  It forced more people to huddled inside the tents which made getting your beer sample a bit of a hassle. It was unanimous decision on the way home to become “Michigan Beer Enthusiasts”. The Beer enthusiasts get into the festival an hour early.  We would avoid standing in this line!

The lines were long, but expected for Dark Horse, Bells and Shorts.  There were 61 breweries and 452 beers to sample so there were plenty of options if you didn’t want to stand in line.  We discovered a new brewery, the Greenbush Brewing Company.  I suspect they have a metal fan on staff.  Check out their beer names:  Anger Black IPA, Rage Imperial Black IPA, Retribution Belgian Hybrid, Pain Imperial Cream Stout, Delusion Barrel Aged Imperial Cream Stout, and Barrel Aged Retribution.  I honestly can’t remember which one I tried but I do remember liking it. 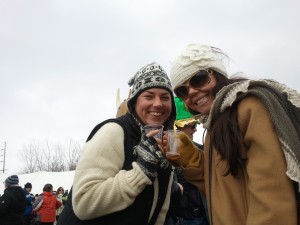 We found Wiggs,the Brewery Operations Manager from Dark Horse in the crowd and he recommended, that Cotton Pickin Beer (cotton candy beer).  It was gone before made it back to their table.  So I tried Sarsaparilla Stout instead.

While standing by the fire we made some new friends.  I didn’t catch their names but they were cute!

Chuck is a hops fan.  He thought the Juicy Tree IPA w/spruce tips, juniper berries, and cranberries and Hopstache IPA w/grapefruit zest from Shorts Brewery were really good.  I’m a stout fan and preferred the Cup A Joe Coffee Stout from Shorts.

Chuck gave this years “Best Beer Award” to Odd Side Ales for their Fussy IPA.  He has already “Friended” them on Facebook.

This year’s take home message for Chuck limit your cheese intake.  Chuck ate a bag of pretzels and pound of cheese this year and was asleep by 7 pm.