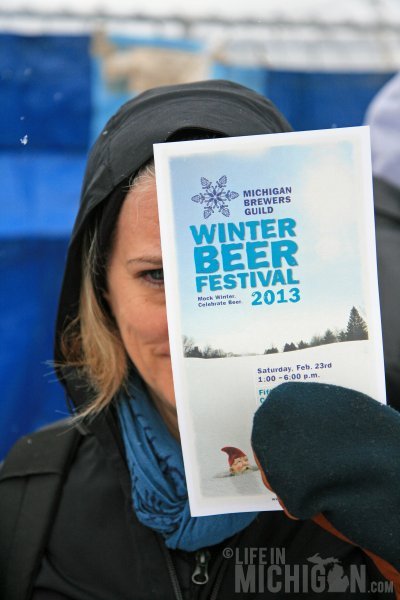 For the past four years, we’ve headed West to Grand Rapids, Michigan with our friends Jeff and Angie, to partake in the annual Michigan Brewers Guild Winter beer festival.  Each of the guild festivals have their own vibe.  The Winter Beer festival brings a spirit of mirthful lunacy.  Crazy hats, outrageous snacklaces (necklaces of snacks), and lots of smiling faces.

After standing in line last year and watching with envy as the enthusiast members got into the festival an hour early, we became enthusiasts too!  However, that doesn’t mean you don’t have to wait in line. 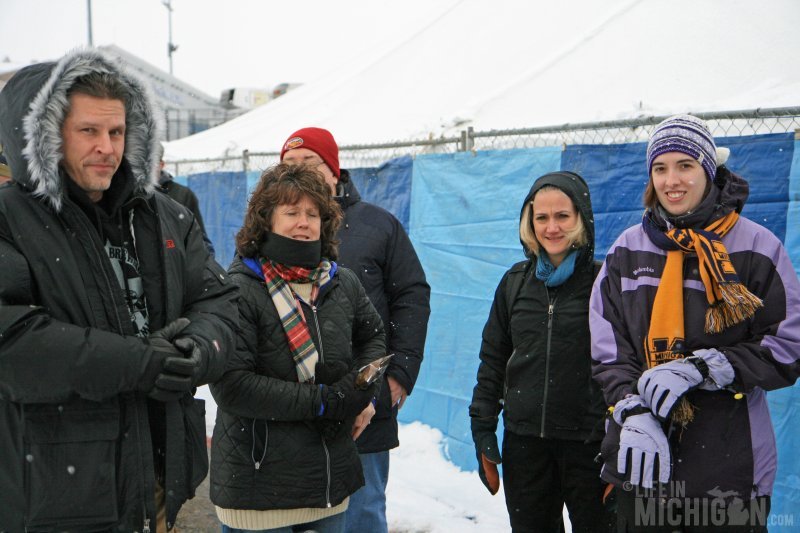 We watched as the line got longer and a steady flow of beer fans made their way into line.  Some of them on sleds! 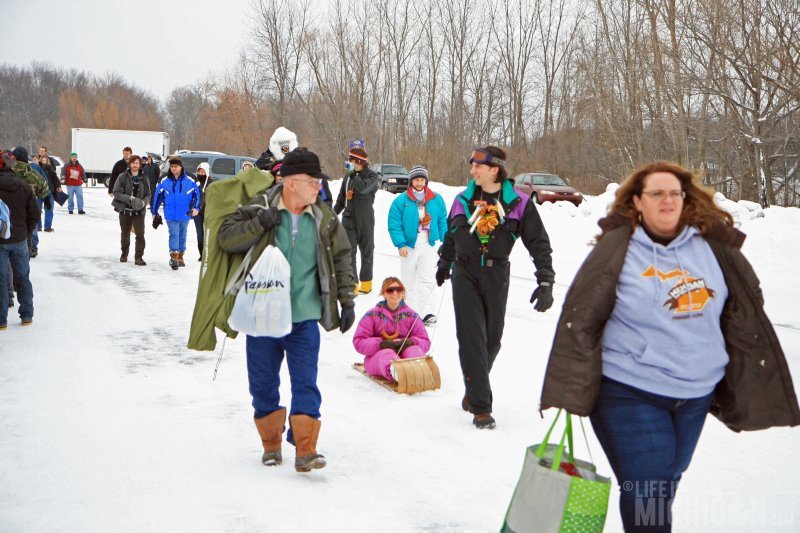 Its more than just beer

Just about every post will most likely focus on the beers at the festival.  I guess that is the point of a beer festival.  But, I think this is also a celebration of winter.  Folks who attend the festival find lots of ways to celebrate.  Including festive head gear! 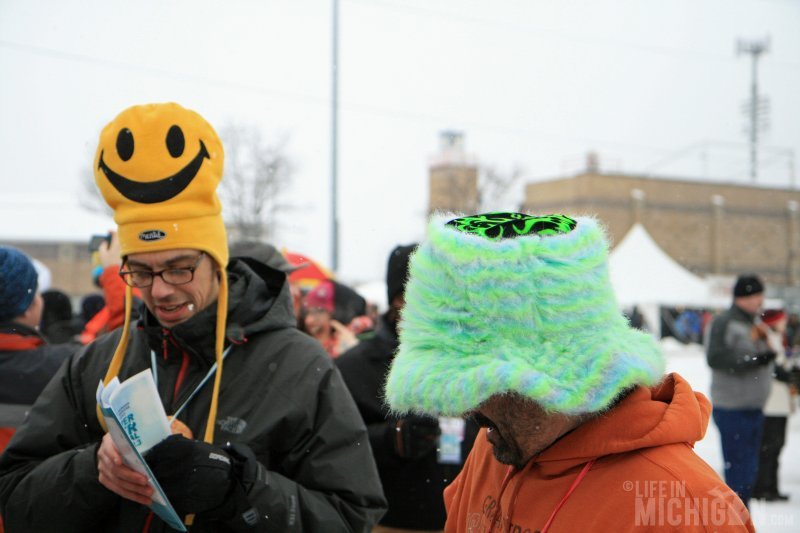 Nothing says I love to drink beer than a penguin. 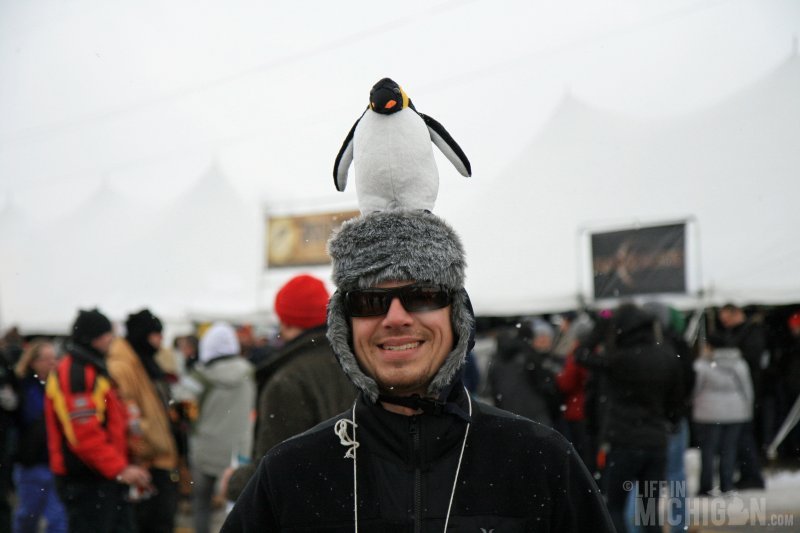 Definitely fun, but I’m not sure how functional this one is for drinking! 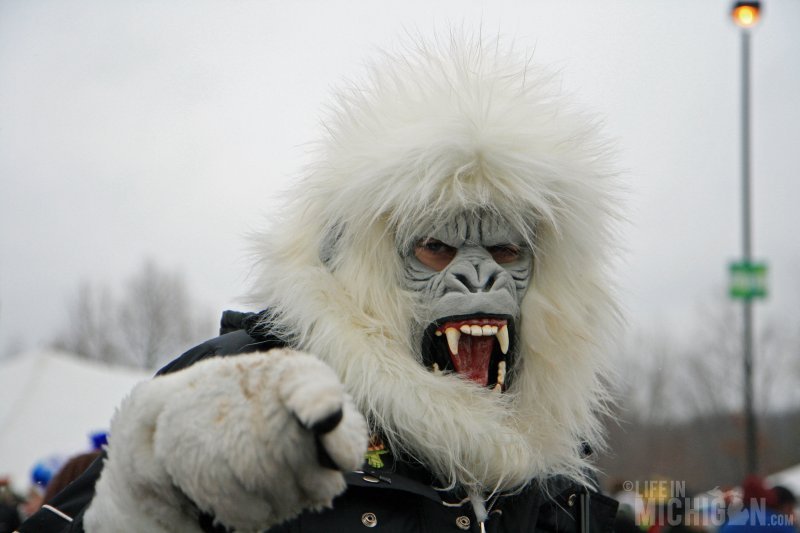 The fun folks from 51 North Brewing had their festive head gear on display too! 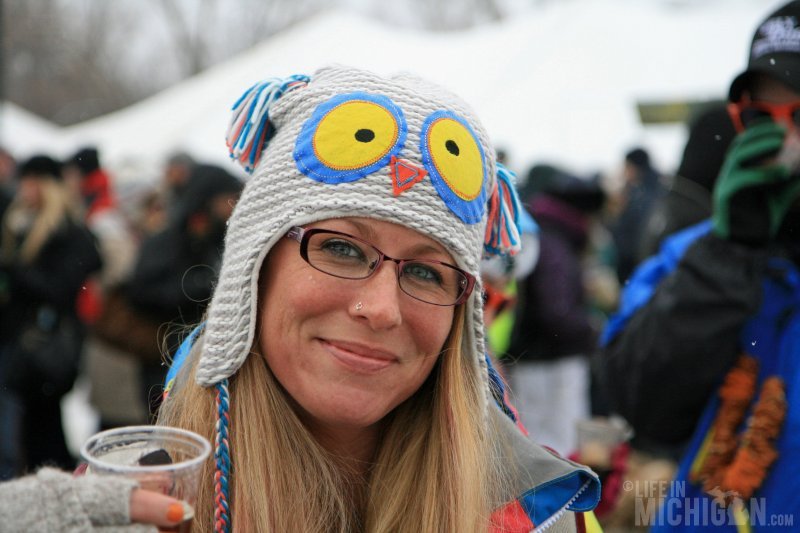 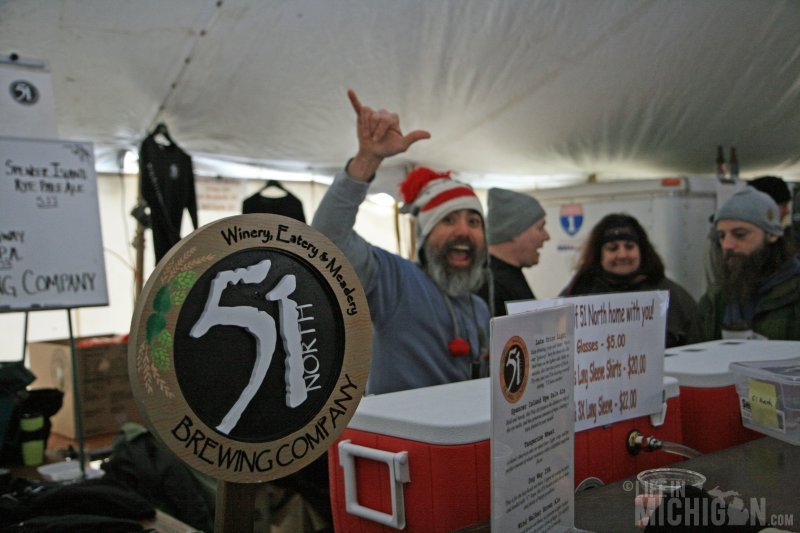 I even got into the act with some fashionable underwear from Beards Brewery that doubles as a hat. 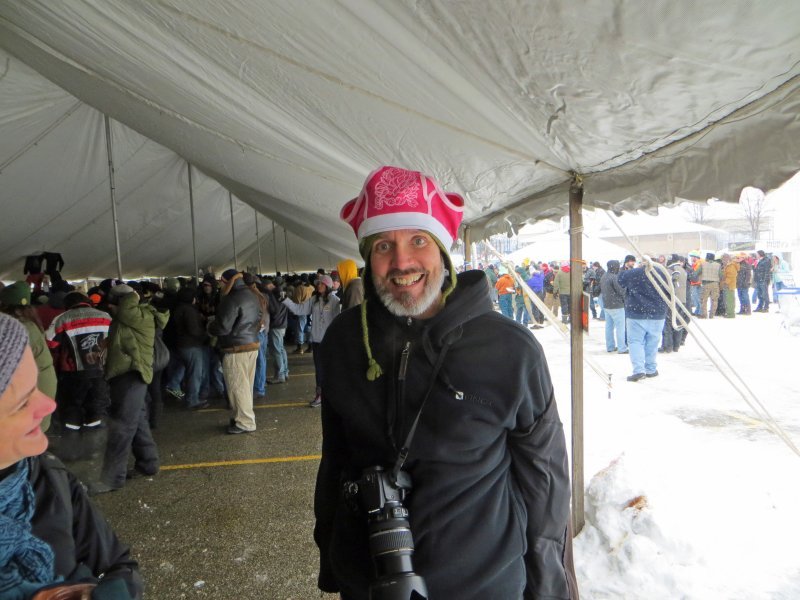 Another facet of the Winter beer fest is the snacklace (snack necklace).  These started out as pretzelaces (pretzel necklace), but add a few beers and the next guy is thinking “I bet I could hang a sausage log off my neck!”.   These girls (who also think the winter beer fest is just like Christmas all over again), included lunchables!  With the added ingenuity of putting it all under a plastic bag, so that your pretzels don’t get soggy! 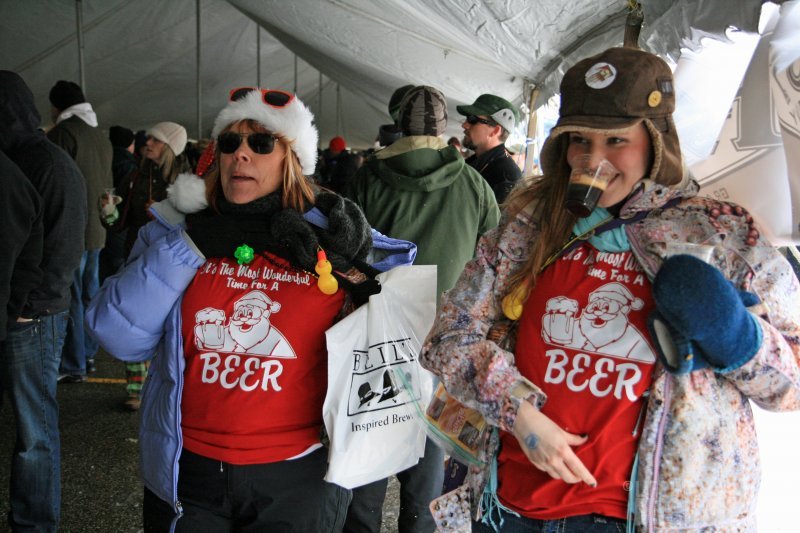 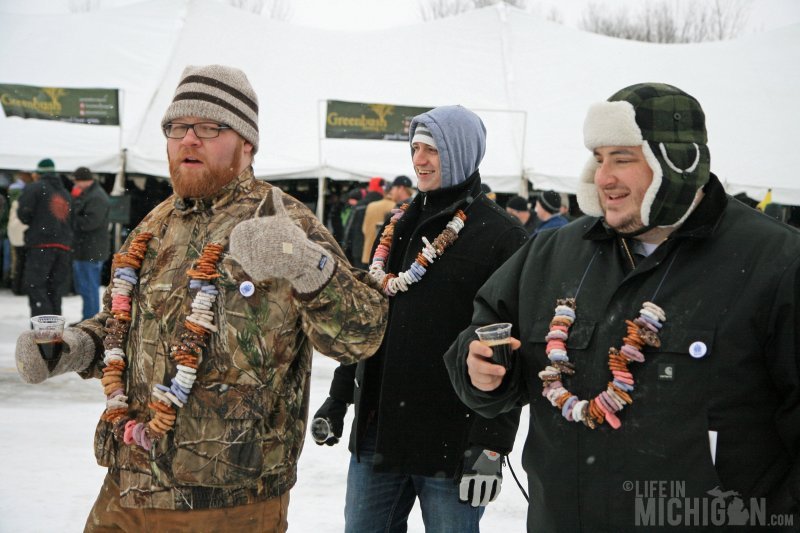 This beer fan went all out with his snacklace and cool hat! 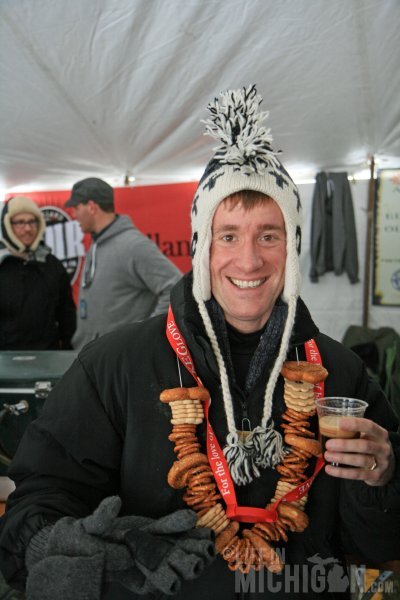 One of the great things about the Michigan Brewers guild beer festivals is that everyone who attends is very friendly and a few folks like to put their own spin on the fun.  Like this guy who started his own sledding run on the snow hill in the middle of the festival grounds. 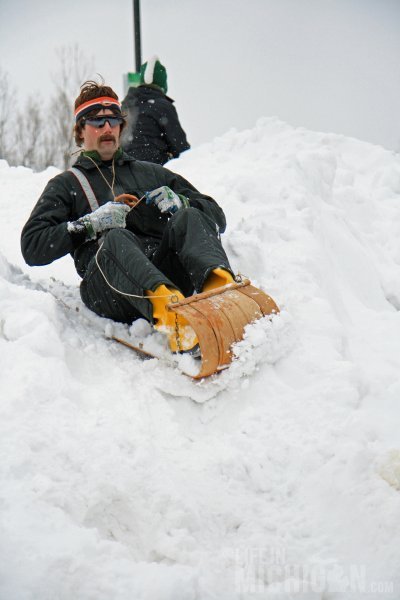 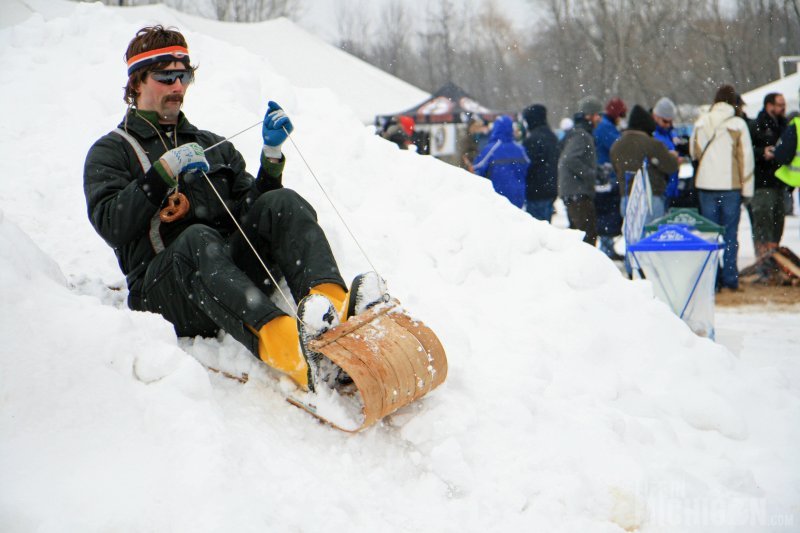 With 625 beers from 75 breweries to choose from and an hour before the rest of the beer fans hit venue, we started out targeting our must have beers.  First stop was Bells.  We were hoping for Black Note, but ended with Wild One Raspberry.  Tart like a raspberry, go figure!

Next up was Dark Horse Brewing.  We love these guys as they make great beer and we feel like part of the Nation.  Their tables were very busy from the start.  I enjoyed a Double Crooked Tree IPA on my first pass, and then a Bourbon Plead The 5th. 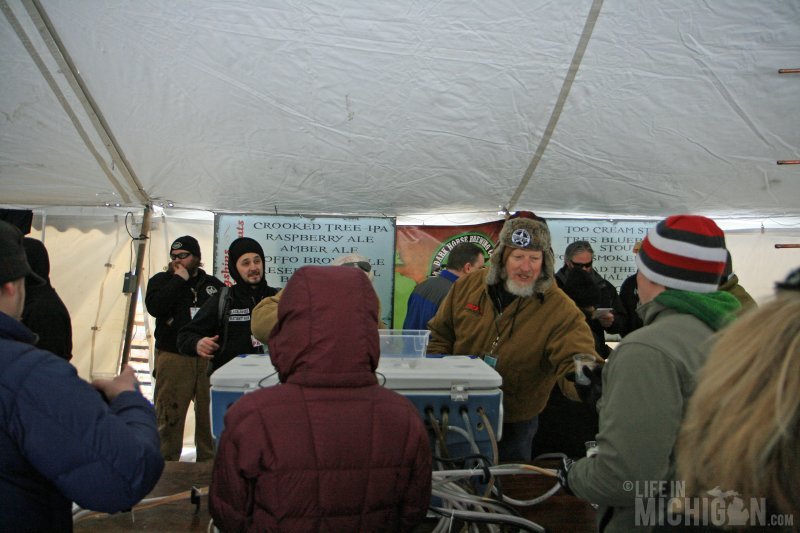 Wiggs was so happy, he had to call out to the Nation! 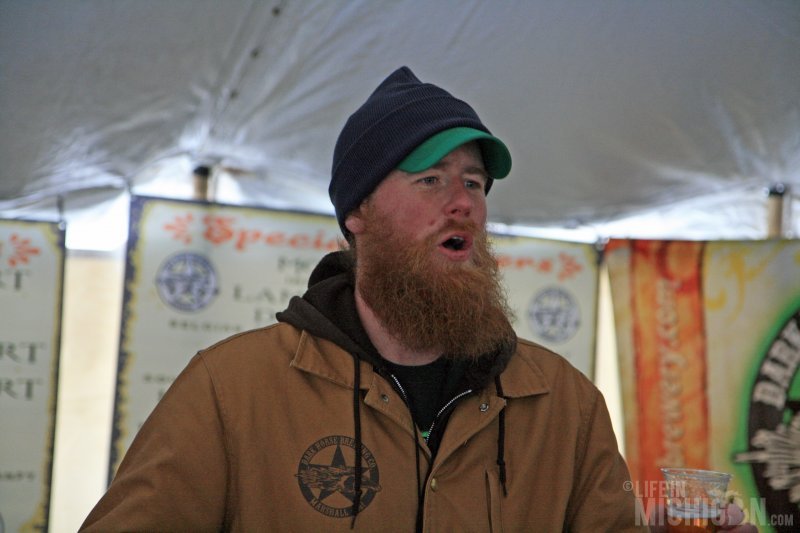 Next stop was Founders, where I had the CBS Maple Barrel Aged Imperial stout which was very nice! 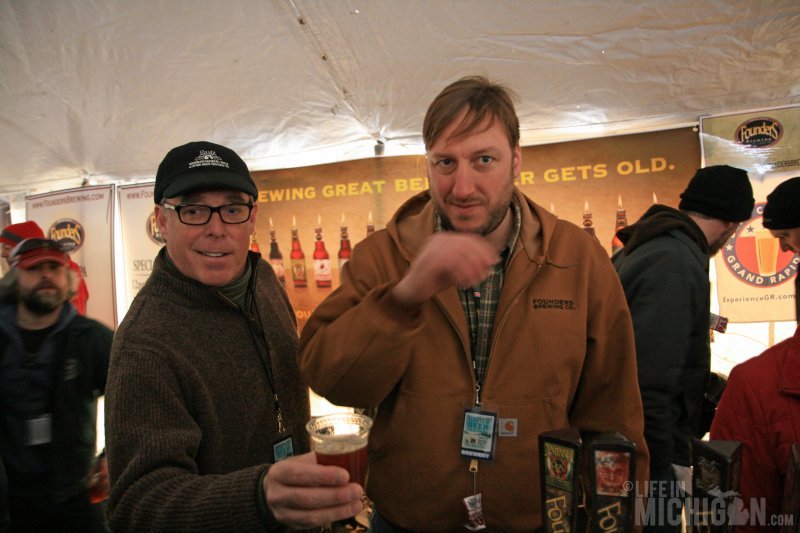 From Founders, we made our way over to Greenbush for the Eh to Zed Maple Brown.  Brenda found I Love You Pete Barleywine interesting.  We then zagged over to Short’s for the delicious Evil Urges.  Then made a run for the DRIPA Rice IPA and Rasberry Eisboc from Kuhnhenn Brewing Company.  The DRIPA was my favorite beer of the fest.

Just before the crowds were unleashed, we headed over to visit with the folks at Blackrocks Brewing.  Andy Reeves remembered us from the 4 Elf party over at Dark Horse where we met him for the first time eating a muskrat head!  He was so excited to see us, he picked up Brenda 🙂  Apparently, thats how Yoopers say hello! 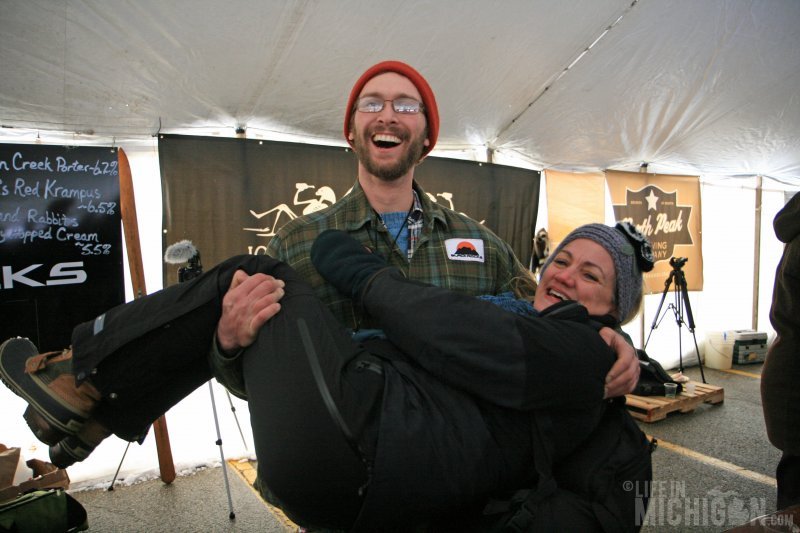 Besides being a lot of fun, the folks at Blackrocks make great beer!  The Double Ginger IPA was a hit with us.

With the crowds swelling the lines, we started to seek out some new beers to try.  I finally got to meet my Facebook friend Cowboy Doug over at 51 North Brewing.  Their Dogway IPA was nice. 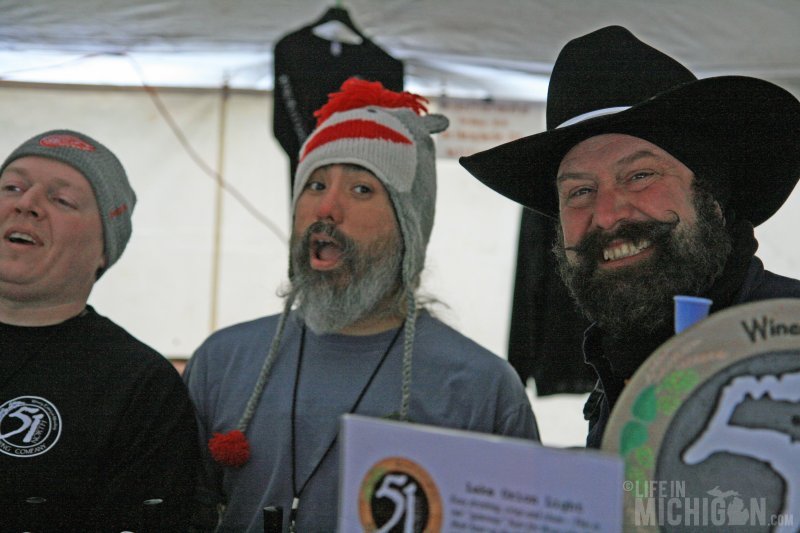 The Passed Out Willy Double IPA from White Flame Brewing was a great find.  I also really enjoyed the Double Top Secret Imperial IPA from Michigan Beer Cellar.  Damn good!  I also have to give two big thumbs up for Barista from our hometown brewers at Wolverine State Brewing Company.  A ton of coffee flavor in this great lager!

The festival wouldn’t be complete without some drama.  Evidently the high octane beers caught up with me as I lost Brenda, Jeff, and Angie for a bit 🙂 I went to use the porta-johns, and completely failed to take my bearings and had no clue where my friends were.  Thankfully Angie sighted me by my crazy green hat (the festival hats are functional too!).   I also found a way to set the speed on my camera shutter to 1/5 of a second which led to 45 pictures that are nothing but white.  Good grief!

We ended our day with some fantastic food over at Stella’s.  They have an amazing selection of vegetarian and vegan food, as well as plenty of good stuff for the meat eaters. 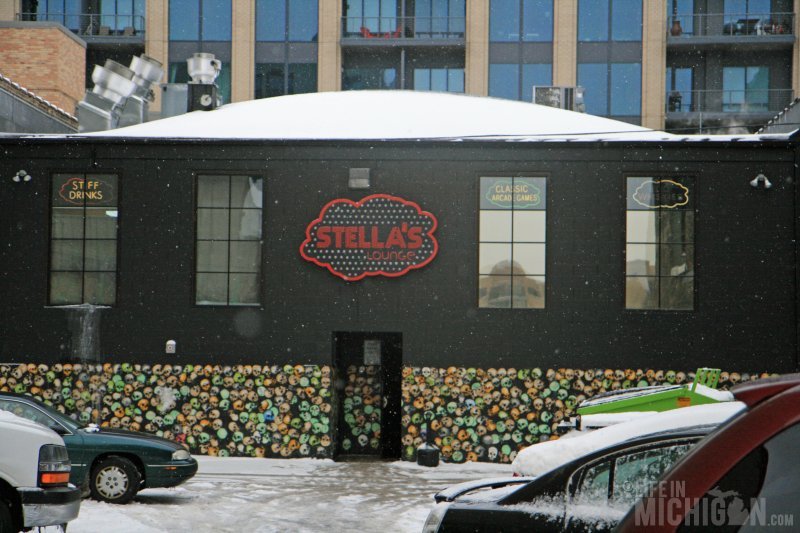 With our bellies full, it was only a matter of minutes before I was sound a sleep on the bed at our hotel, tv remote in hand.

For lots more pictures from the festival, please check out our gallery.