In late August 2014, during a euphoric runner’s high, we registered for the 2015 North Country Run. I can only laugh as I remember the sunny morning and the lively discussion. I was pushing for the full marathon, but luckily good sense prevailed and the collective group decided the half-marathon was the wise choice. Thank goodness someone had better sense than I had that morning.

A year later, we headed to the Big M Trailhead in Michigan’s beautiful Manistee National Forest. When we registered a year ago, my confidence was at an all time high. “We aren’t new to running trail races,” I said when campaigning for the full-marathon. “We have run the Potawatomi Trail Race in Pinckney, Michigan, the Tahqua Trail Run in Tahquamenon Falls State Park and even Dances with Dirt in Hell, Michigan, so logic would suggest we’d sail through this race too.” And for some reason I thought the area was kind of flat. I’m here to report, it isn’t kind of flat!

The Big M Trailhead is an area called “Udell Hills.” The keyword is “HILLS.” The North Country Run course description is definitely accurate, but understated to say the least, “The trail is a single-track trail with enough hills to make for a challenging race. There is no high altitude to contend with, no rocks to jump over, and no stream crossings to wade through, just a beautiful forest with a roots to remind you’re not on pavement.”

If you love trails and a challenge, this race is definitely for you! Those are my words….

We arrived on Friday, August 21, 2015, to pick up our swag. It is probably the best swag I’ve ever collected for a race and I’ve been running a long time. 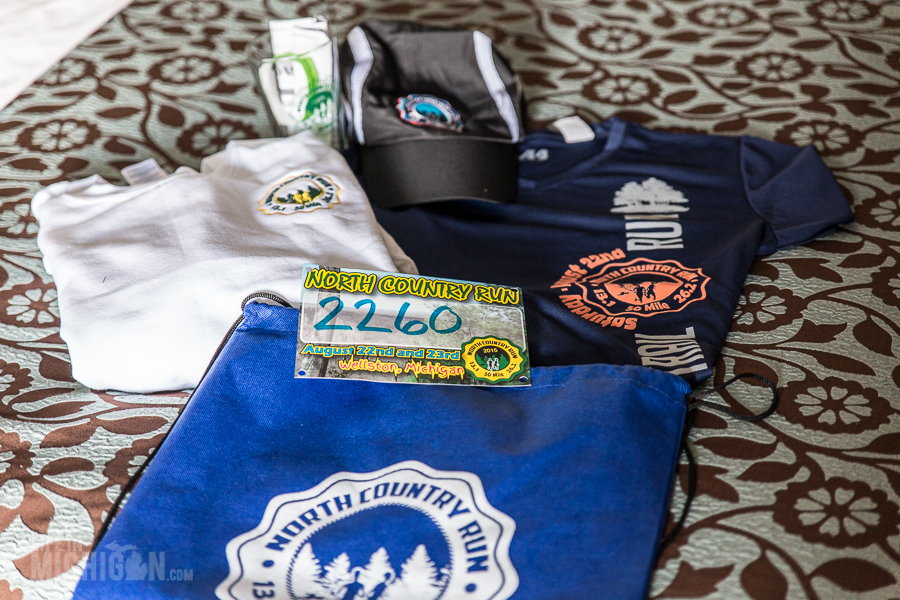 I realized too late that we’d arrived without our unique bottle of beer for the Race Director, Chris Nicholas. 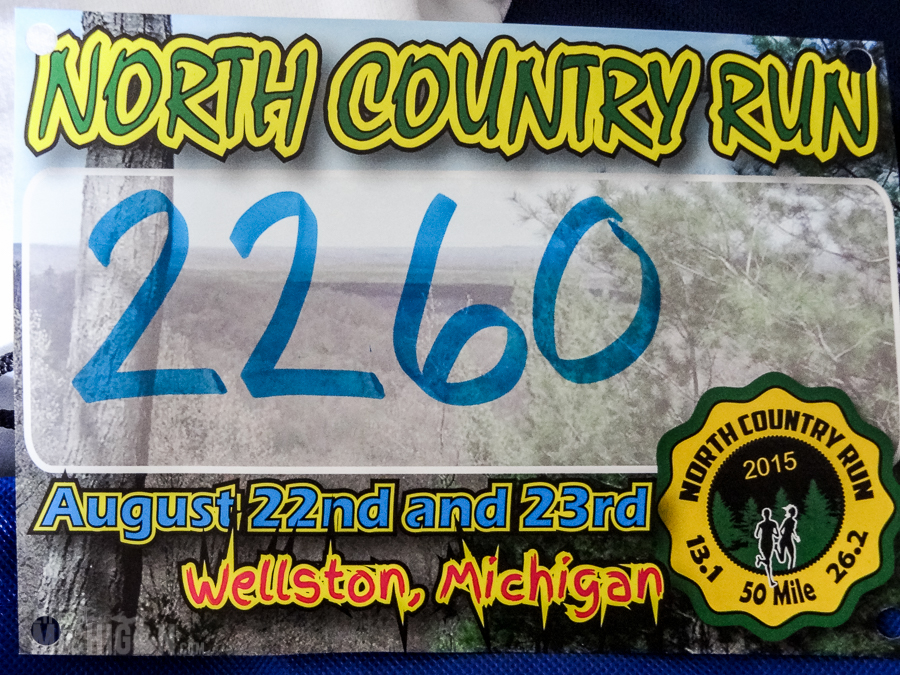 After packet pick up, we toured Manistee, found dinner and had a drink or two. You’ve got to carb-load right? 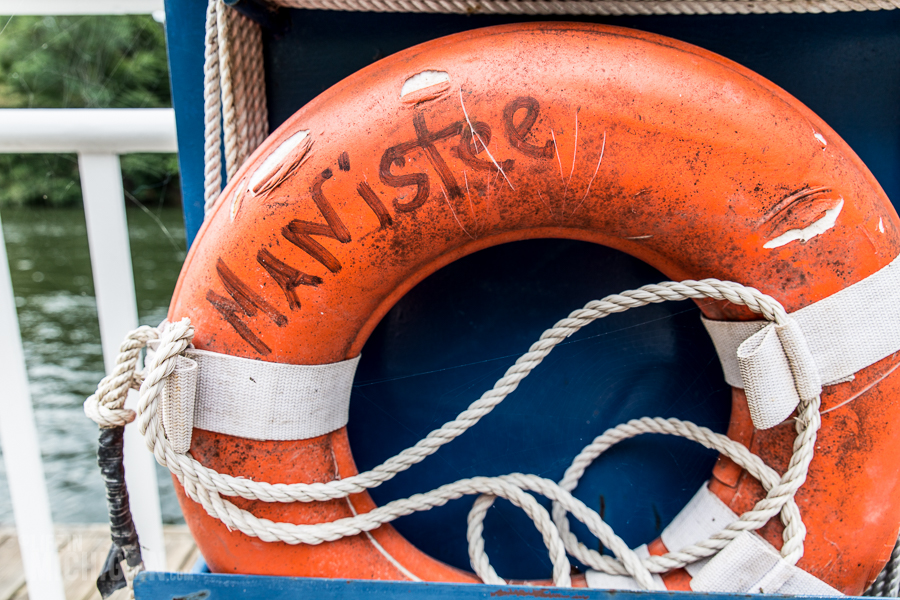 After dinner, we wandered over to Lake Michigan to watch the fishermen and birds catch fish. 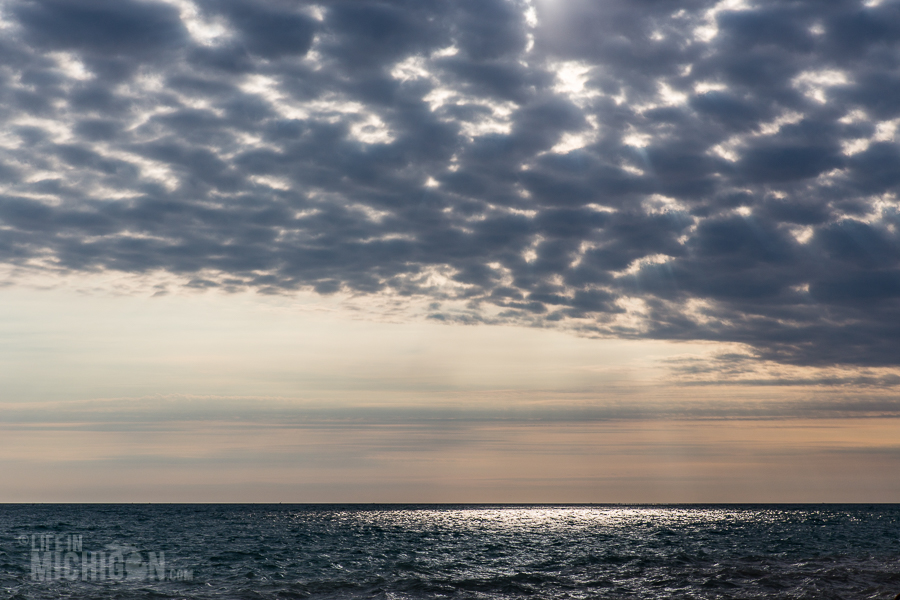 On Saturday morning we returned to the Big M Trailhead. My confidence wasn’t nearly as high as it had been a year ago and I had a slight hangover. I probably should have drank water instead of beer and now there was a murmur rippling through the crowd about the challenging sections of the trail. Maybe the murmur was just in my head? Everyone else looked pretty confident and ready. 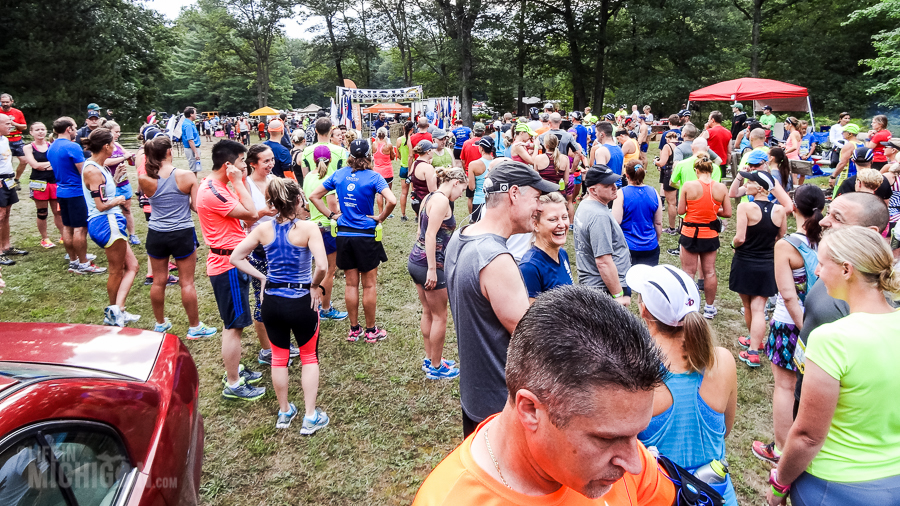 I could hear the race director giving last minute directions and saying something about the aid stations and don’t go too fast at the start, but the anxiety that had just been a quiet murmur in my head was now bubbling out and nothing the Race Director was saying made any sense. Chuck could see I was starting to panic and said, “Don’t worry, the hardest part is during the first 5 miles. The hills are just rollers, you’ll be fine.” I’d like to know where he got this information. 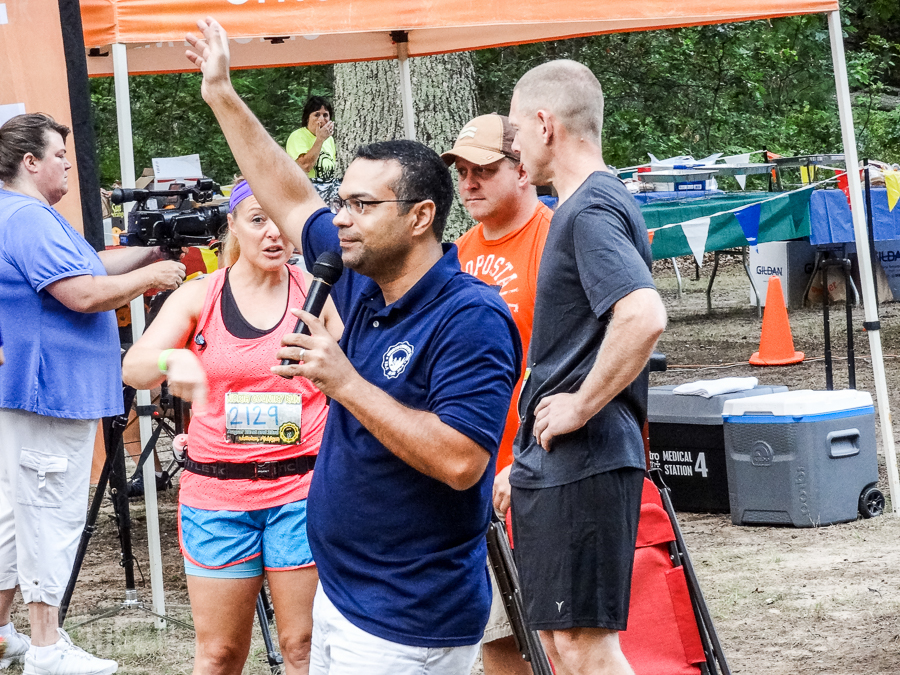 Finally the race was starting and the first wave of runners bounced over to the start line. A young woman sang the National Anthem and did a fantastic job, I’m might add, and the runners were off and running. 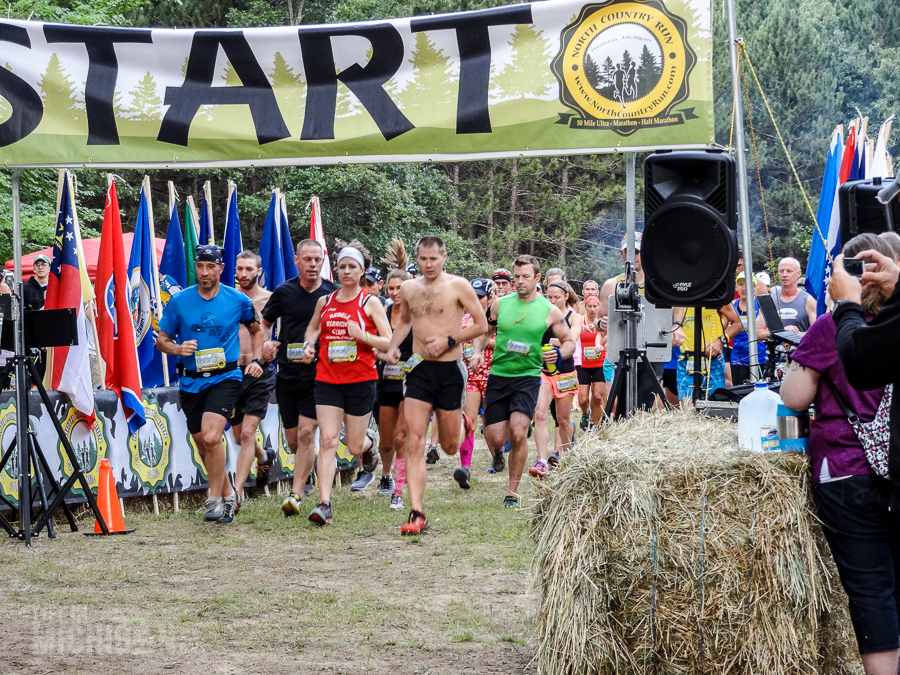 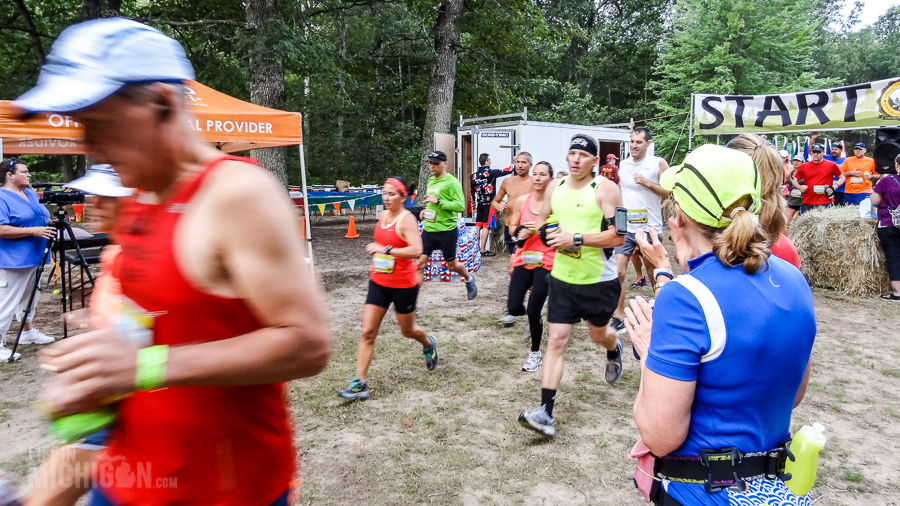 All the runners started out strong and Chuck was running like his kilt was on FIRE. I kept asking where are the rolling hills. But he never answered and I’m still not clear about the definition of “rolling.” The hills weren’t steep, more like a long gradual grind that made your legs burn. Finally, Jeff said, “Chuck we need to walk this hill, it is too long we will burn out.” All I could think was “Thank you Jeff, thank you! I’d turn around and hug you, but that would be weird and slow us down, but I’m really glad you said something.”

I found it interesting that several hills required caution signs. I idly wondered if these were the “rollers” Chuck mentioned before the race started. The trail wasn’t twisty, but there were a number of switchbacks. One ridge line, conjured images in my consciousness from the movie, “The Last of the Mohicans.” I’m sure Danial Day Lewis never tripped on a root! I had to consciously think, “Lift your feet UP!” or my toe would catch a root. The roots weren’t particularly bad, but were hidden in the leaves, so if you weren’t picking up your feet you’d catch a toe. After the second face plant, I had a melt down and started to cry. This made Chuck feel bad and Jeff ran ahead. I was relieved to see him run ahead and really wanted Chuck to run ahead too. I wanted to run the race at a slower pace. I couldn’t keep the pace Chuck was setting and I didn’t want to hold him back. (This is the ugly part of running trail sometimes you cry and get angry.) Chuck wouldn’t leave me because the crying triggered shortness of breath and it took a few minutes to get it under control. When it was over and I’d relaxed, we’d settled into a nice pace. It was close to a walk, but that was ok.

My friend Angie, who was our support team for this race, asked when we finished the race, “Was the trail beautiful?” This is such an interesting question and the short answer is yes, it was beautiful and would be exquisite in late September when the leaves change. It looks a lot like when you are driving down a beautiful road in Northern Michigan in your car and the trees are zipping by. That doesn’t feel very satisfying does it?

I’ve given Angie’s question a lot thought and added to it: Why run trail or this particular trail? If I had to bundle it into a simple answer, “it is a challenge that allows escape from the city’s industrial noise. It is green and smells like the outdoors and not car exhaust It is a forced disconnect from the chatter.” Again not very satisfying….

But why a trail race? Other runners are a welcome distraction. Chuck, Jeff and I call the runners who chatter, talk radio runners. It is such a lovely distraction. And when you are tired of their show, you slow down or speed up and radio channel changes. I love listening to the talk radio runners. The specific details of their conversations are more clear to me and more precise at this moment than the conversations I had at work just hours ago. I’m sure it has to do with the endorphins, but I really felt connected to their voices.

But why this particular race? Simply: It had a limited number of runners. It was in Northern Lower Michigan so we could get there in an overnight. And I’d never run it before and wanted to experience it. 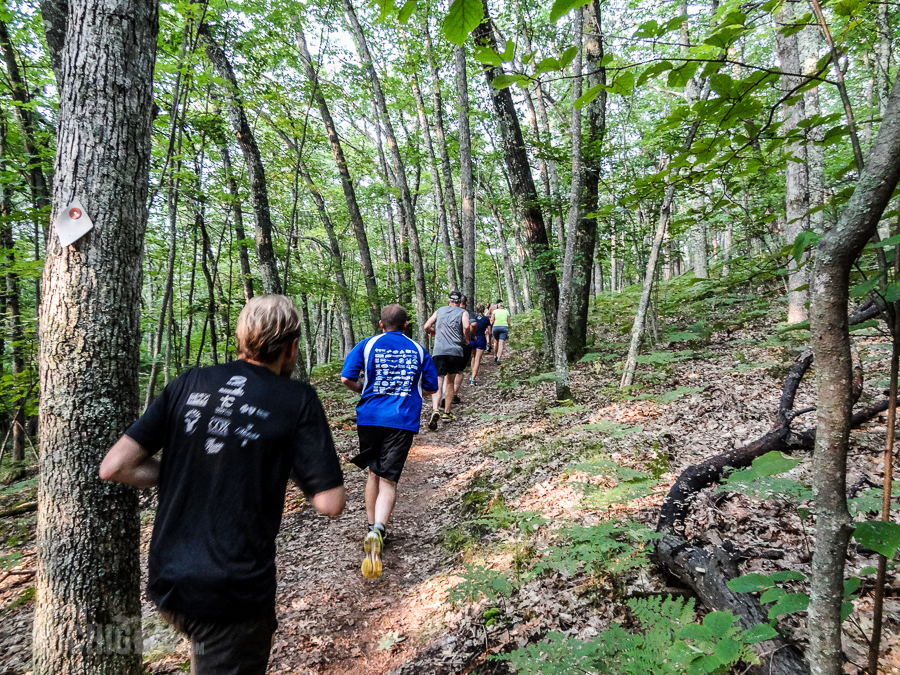 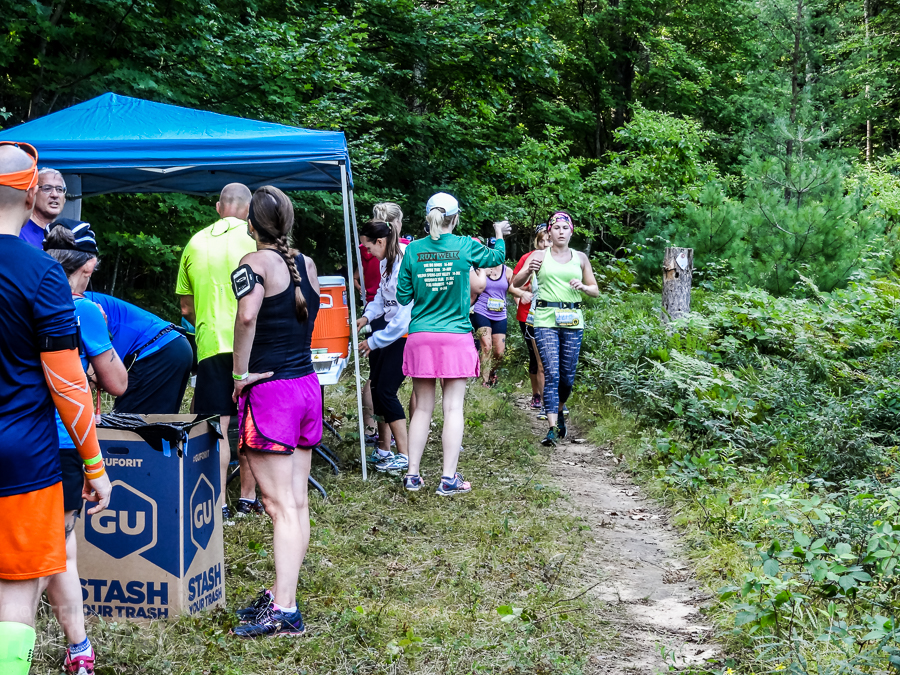 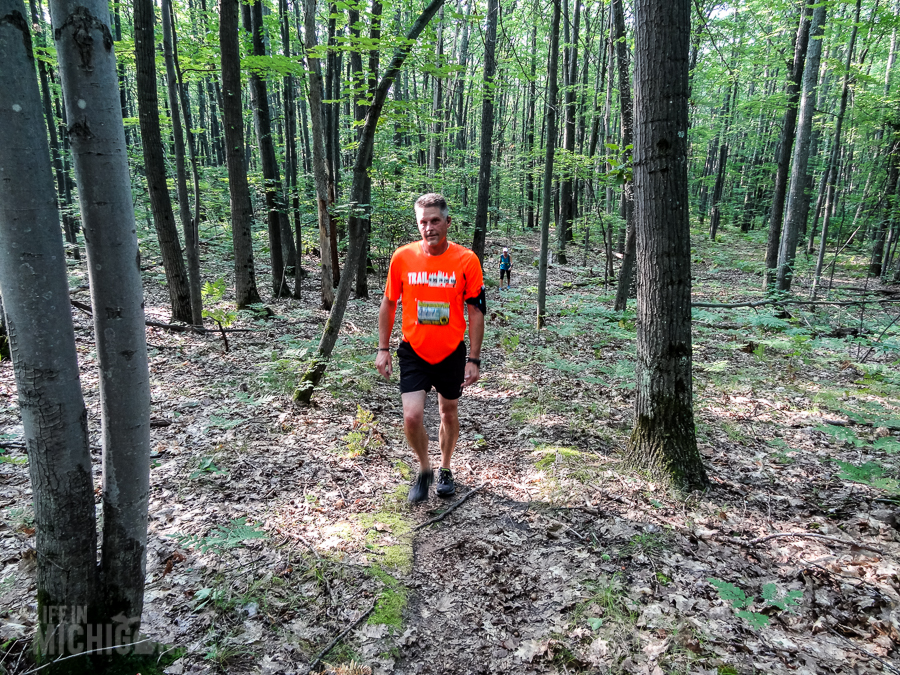 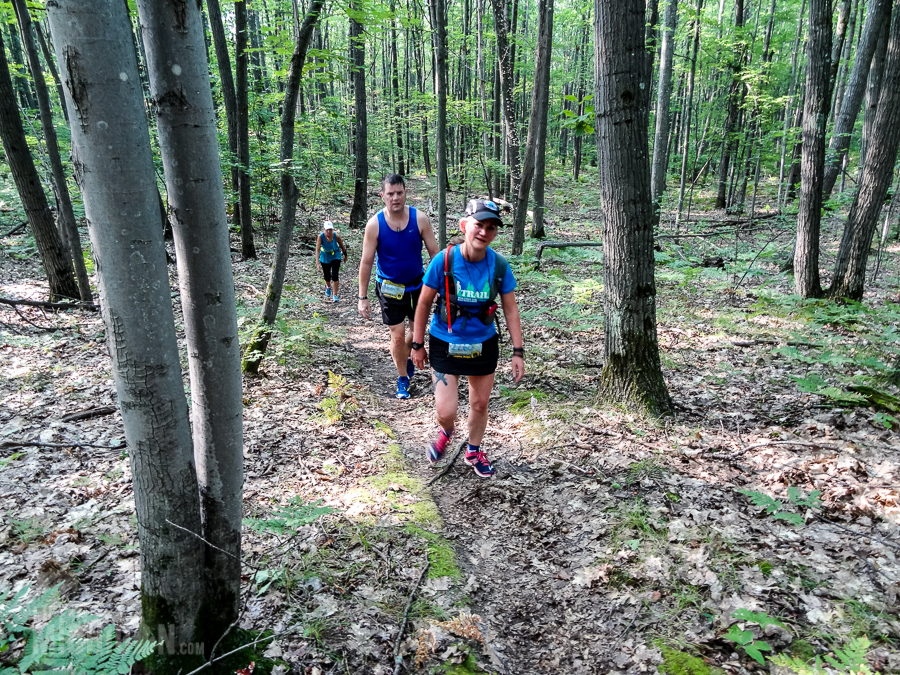 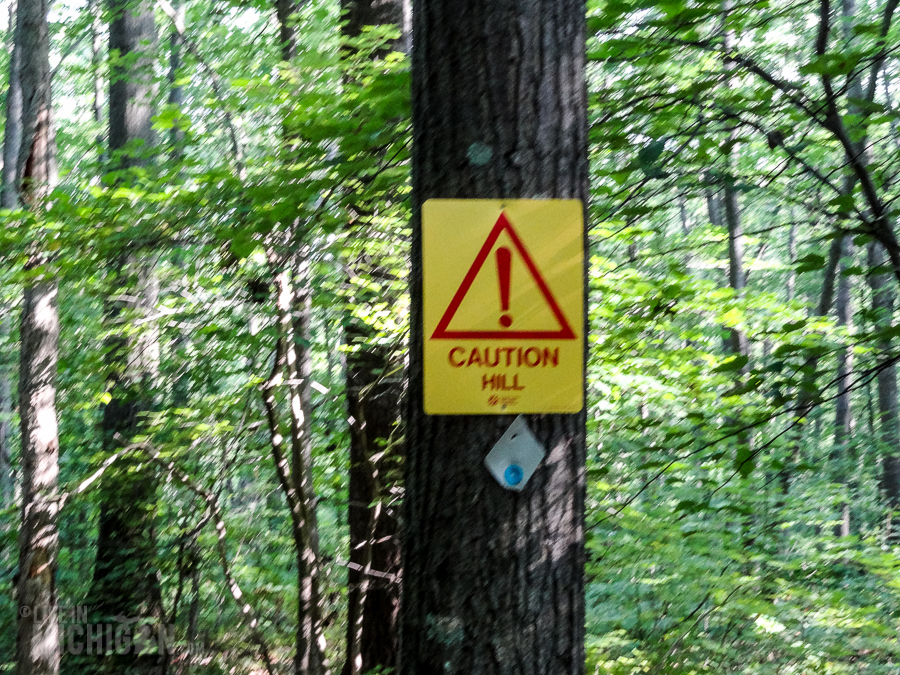 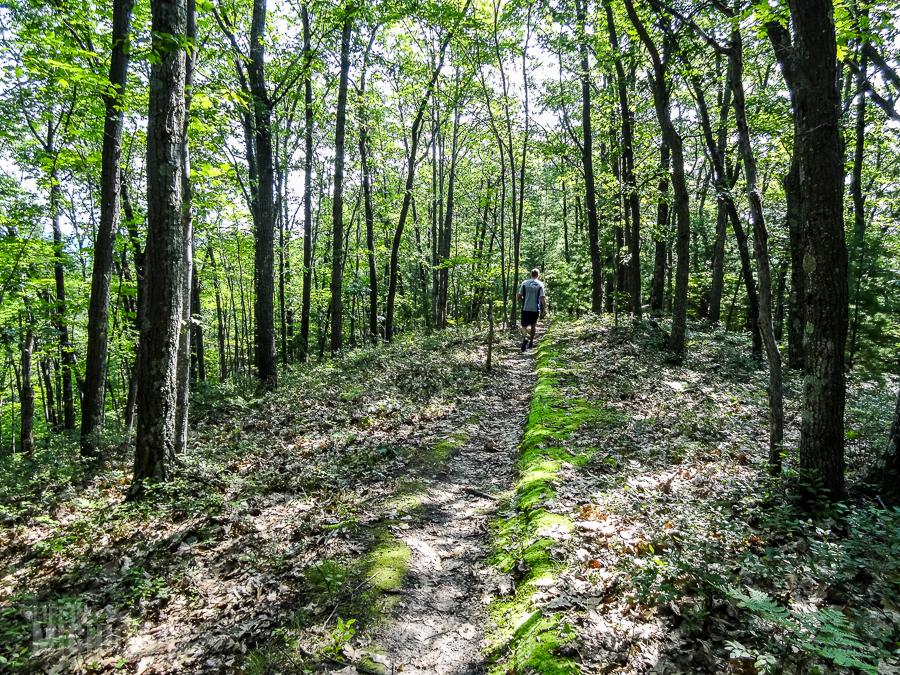 The final mile begins with a beautiful view (not us but the Manistee Forest behind us!). We could hear the music and the cheers from the crowd below. The smell of amazing food waiting for us at the finish line was floating towards us. Yes, this is how the runner’s high begins and why you get sucked into the next race. At his moment you know you are within 10 minutes of drinking a beer and sitting down. Somewhere in the recesses of your mind you realize, it is all downhill and say a quiet prayer to guardian angel for not letting you stop. 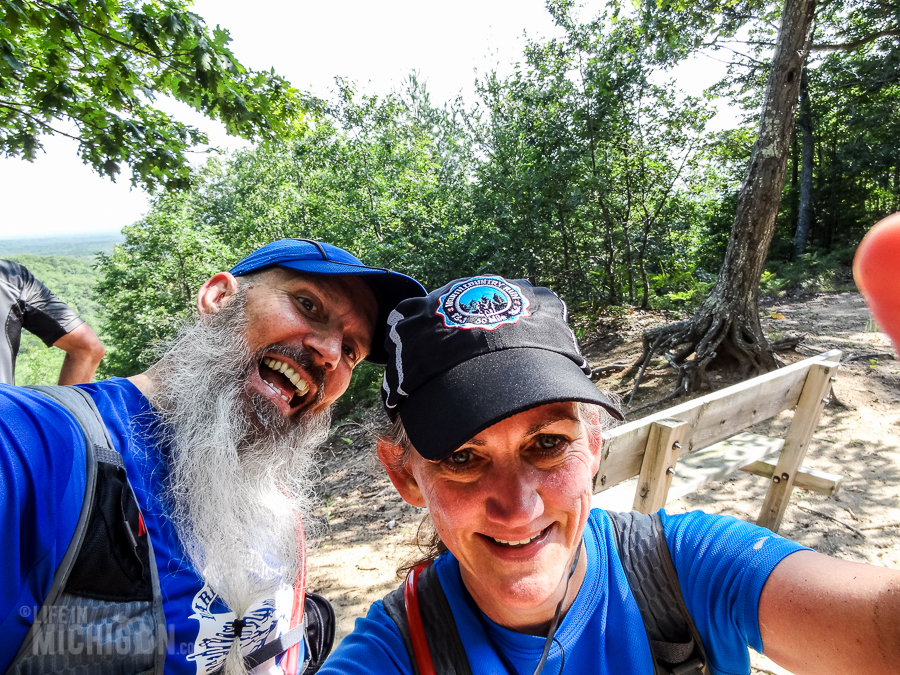 We crossed the finish line and collected the largest race medal ever. Seriously, it dwarfs my other race medals. 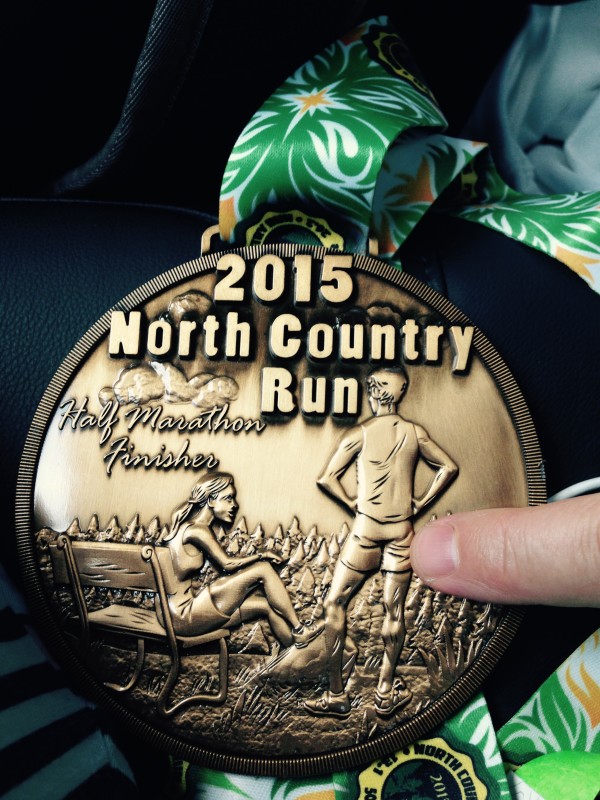 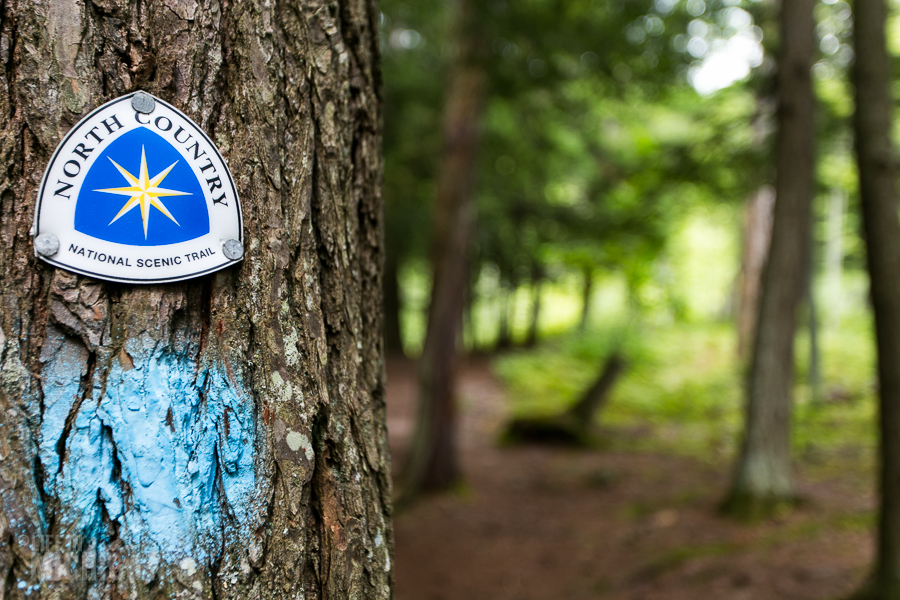 Have you run the North Country Trail Race? If so, leave us a comment or send us a message. We’d love to hear your story. You can check in the gallery for more pictures from the event.