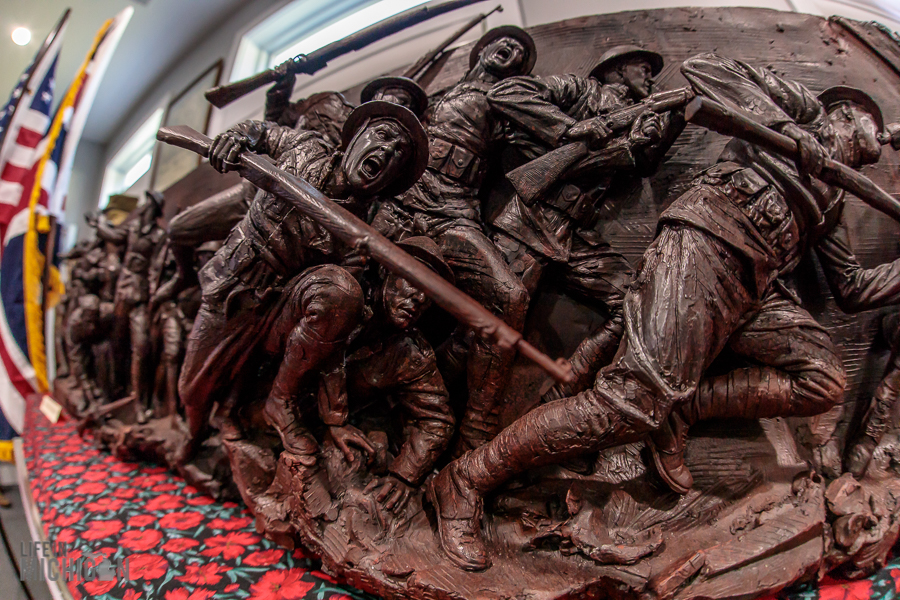 We are big fans of the wonderful historical gems the Michigan Military Heritage Museum and Coe House tucked away in Grass Lake. We had the pleasure of being invited by the Michigan Military Heritage Museum to attend the Over Here! Michigan World War I Centennial event which featured immersive exhibits of WW I. This included a re-creation of the fighting trenches, authors sharing their books on the war, and an exhibit of photographs from the Chelsea District Library. 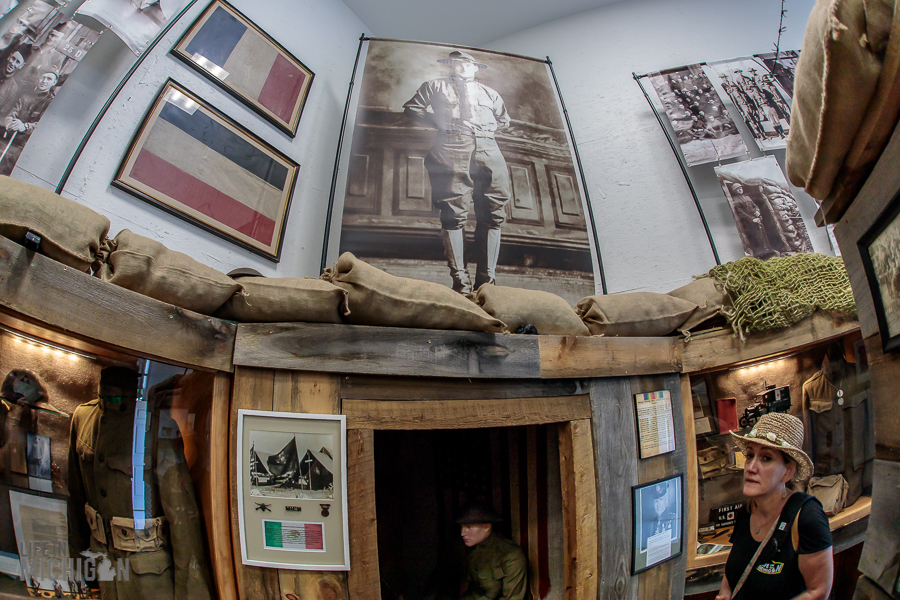 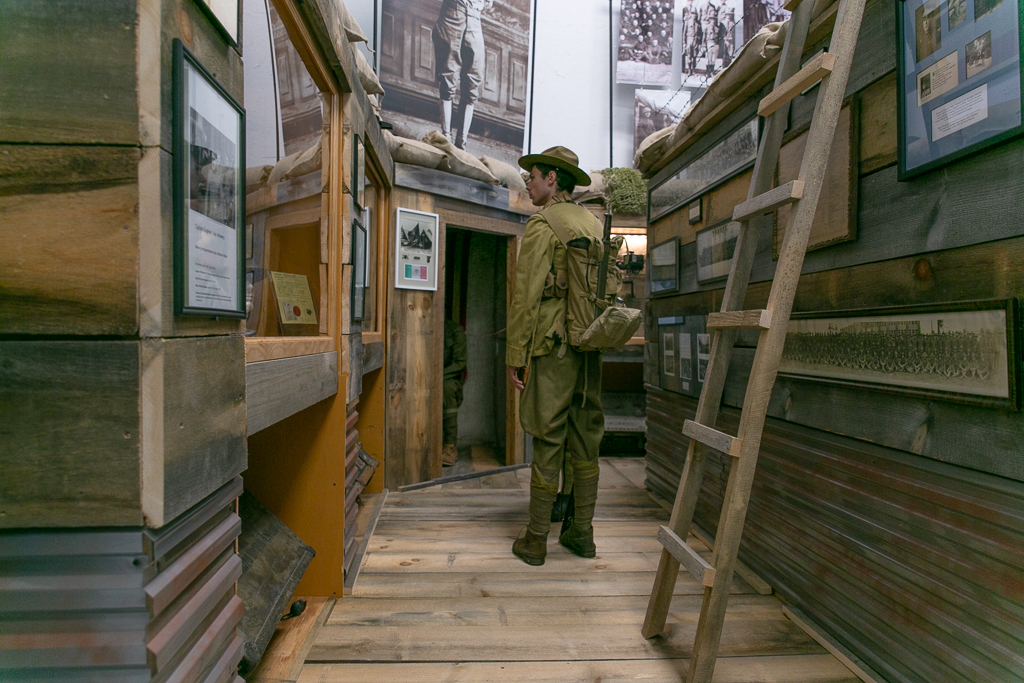 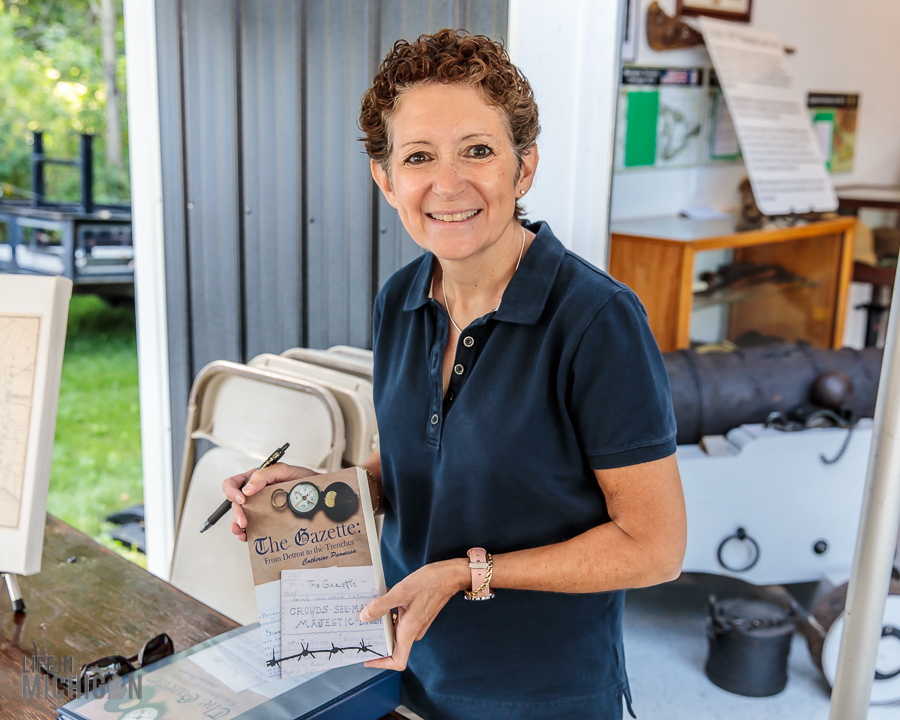 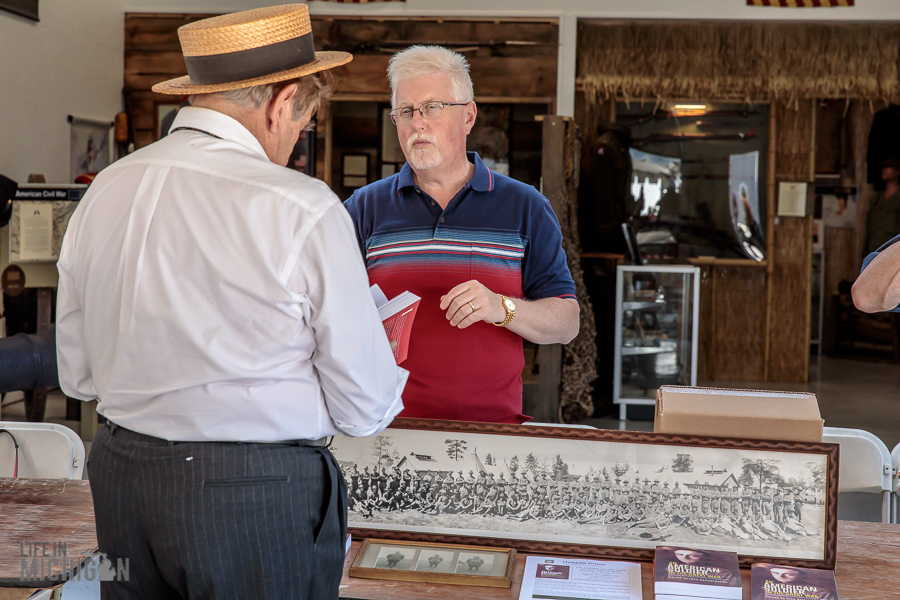 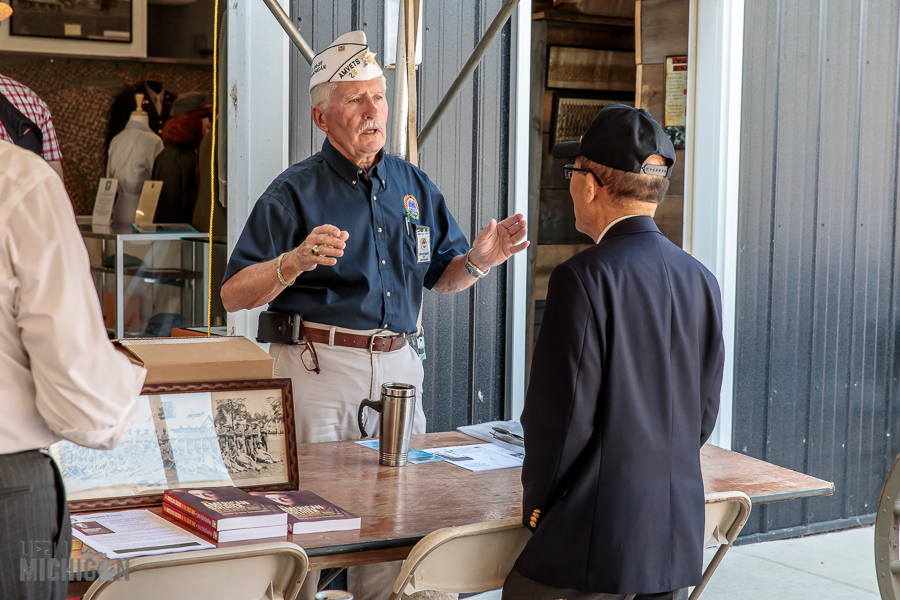 Over Here references the mobilization of our entire country toward the war effort. World War I was a total war, meaning everyone from the soldiers on the front line to the machinist in the factory to the family at home growing victory gardens were doing what they could to defend our country. This is also a reference to the popular patriotic song “Over There” by George M. Cohan. 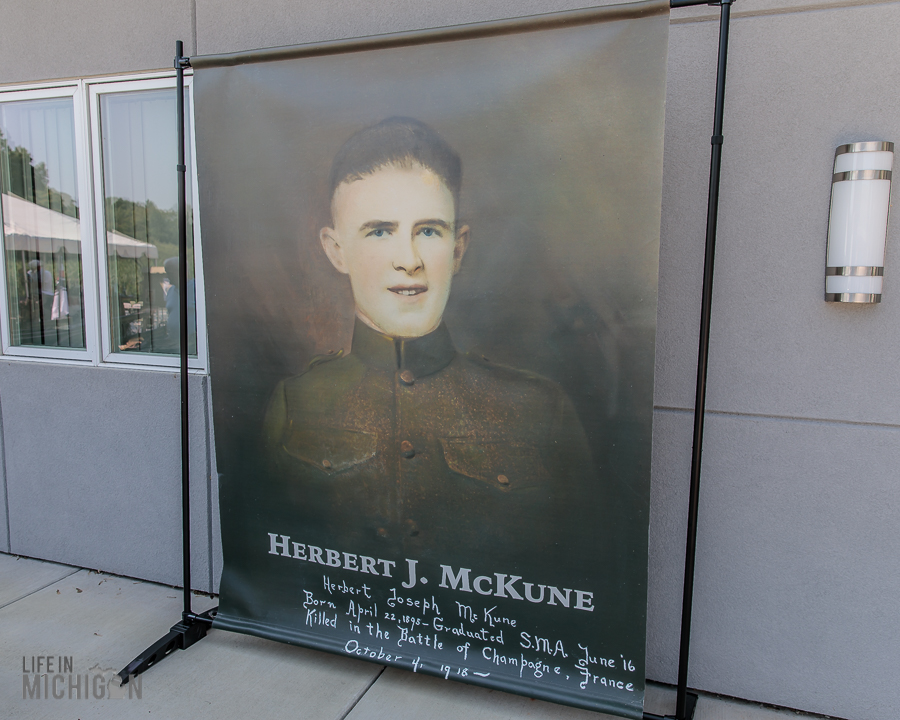 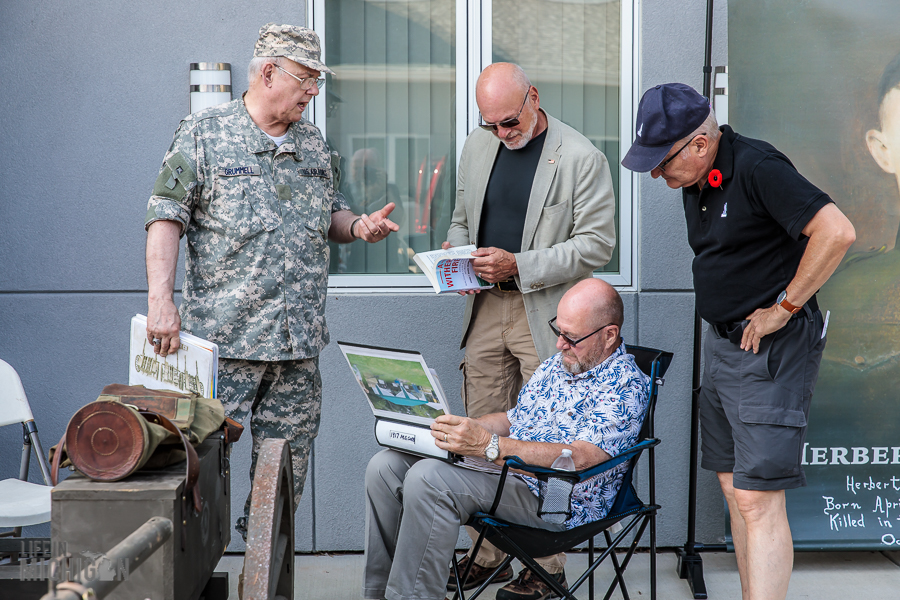 Included at the Over Here! Michigan World War I Centennial event was a scale model of the proposed memorial in Washington DC. Created by artist Sabin Howard, the piece called “Soldier’s Journey” is an extremely evocative and moving tribute to the nearly 4.7 million men and women who were mobilized and the nearly 177 thousand US deaths. The memorial is being built without government funding. Check out their site if you’d like to contribute. 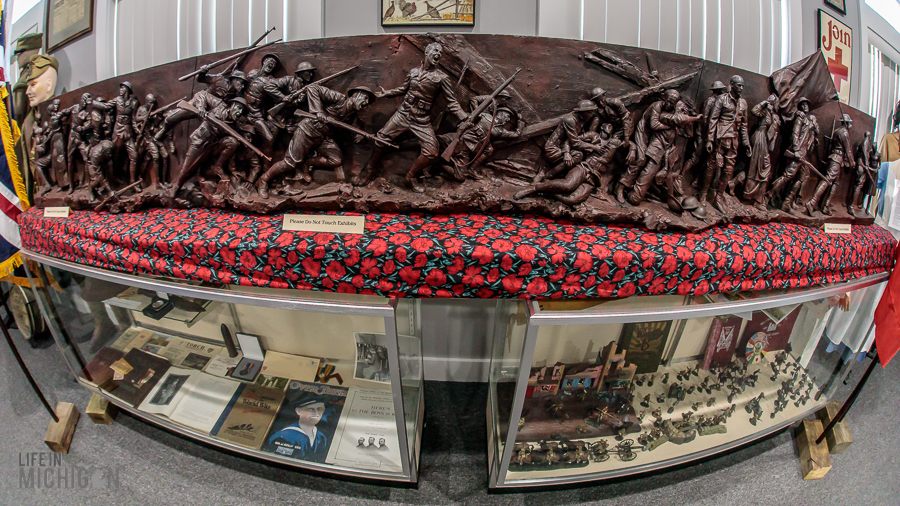 Providing the invocation for the event was Major General James Mukoyama. He was the first Asian American to command a US Army Division and served for over 30 years including deployments to Vietnam and Desert Storm. 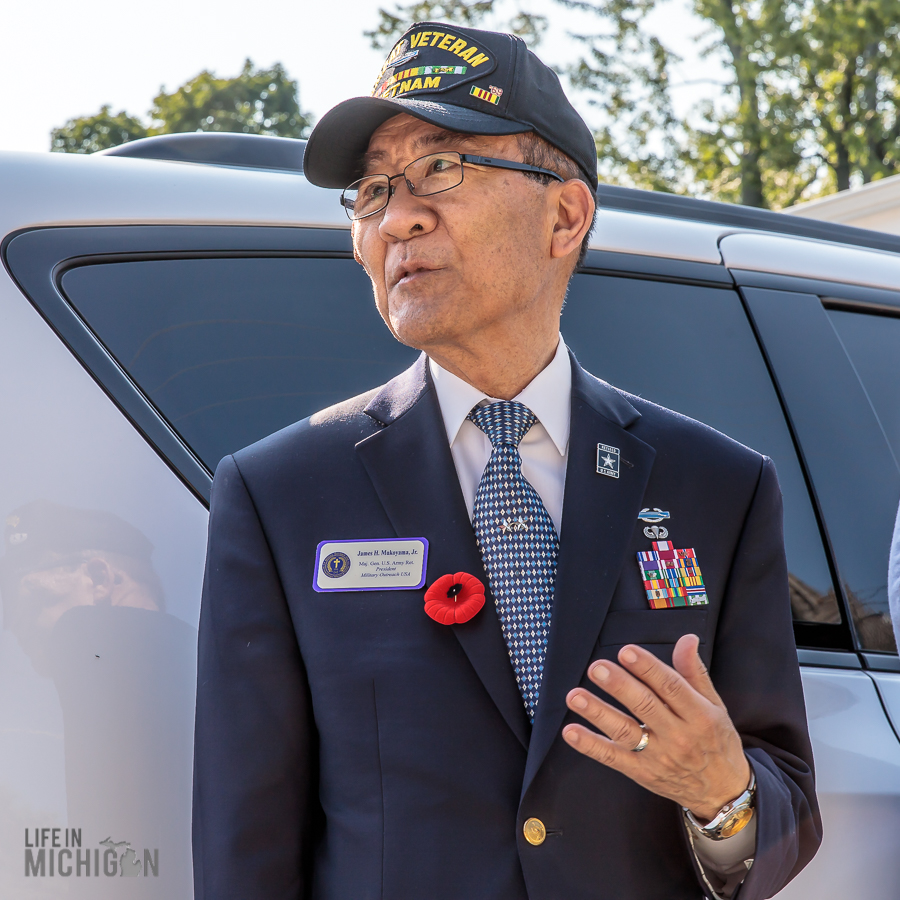 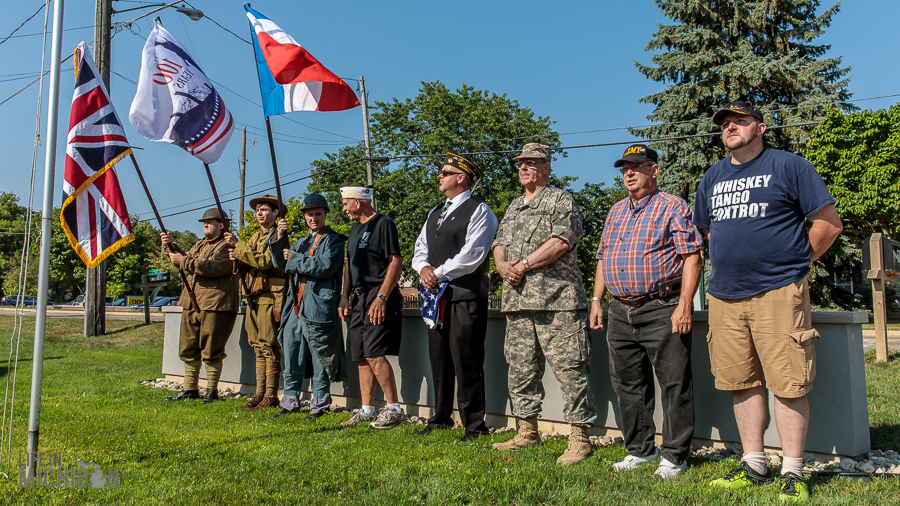 While we were thoroughly enjoying the invocation, we were startled to hear our names being read by Dennis Skupinski. Dennis is an active member of the Michigan Military Heritage Museum board and is the chair of the Michigan’s World War I Centennial Commission. At first, when I heard my name, I thought it was a mistake. 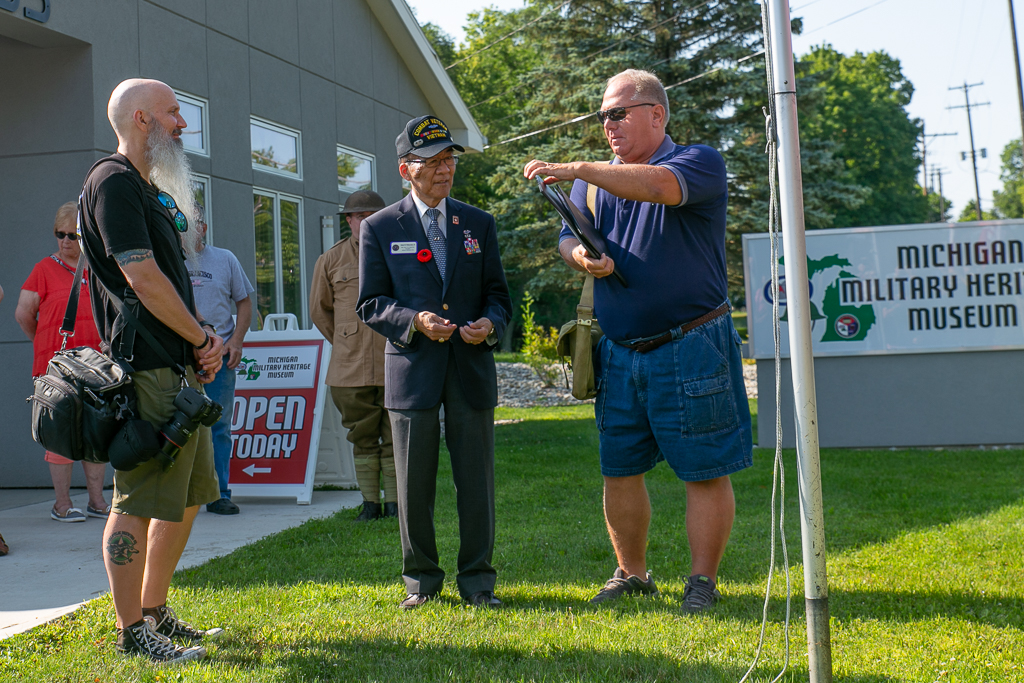 To my shock, Brenda and I were awarded a Certificate of Excellence for our work to promote the Michigan World War I Centennial events such as this one. We also received our very own challenge coins. If you’ll remember from the Sabaton event, I was quite enamored with the challenge coins. To say that we are humbled and appreciative is an understatement. I became a bit emotional when shaking the hand of Major General Mukoyama who presented our awards. It is an incredible honor that I’m not quite sure I deserve, yet we can’t thank Dennis and the commission enough. 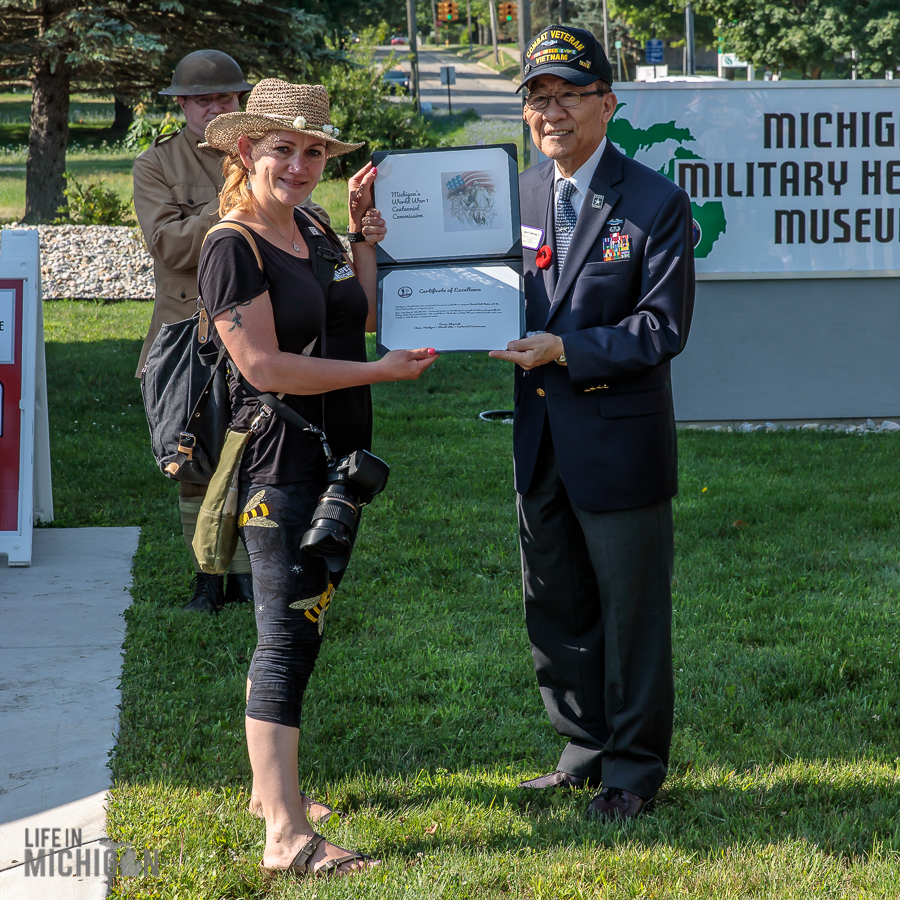 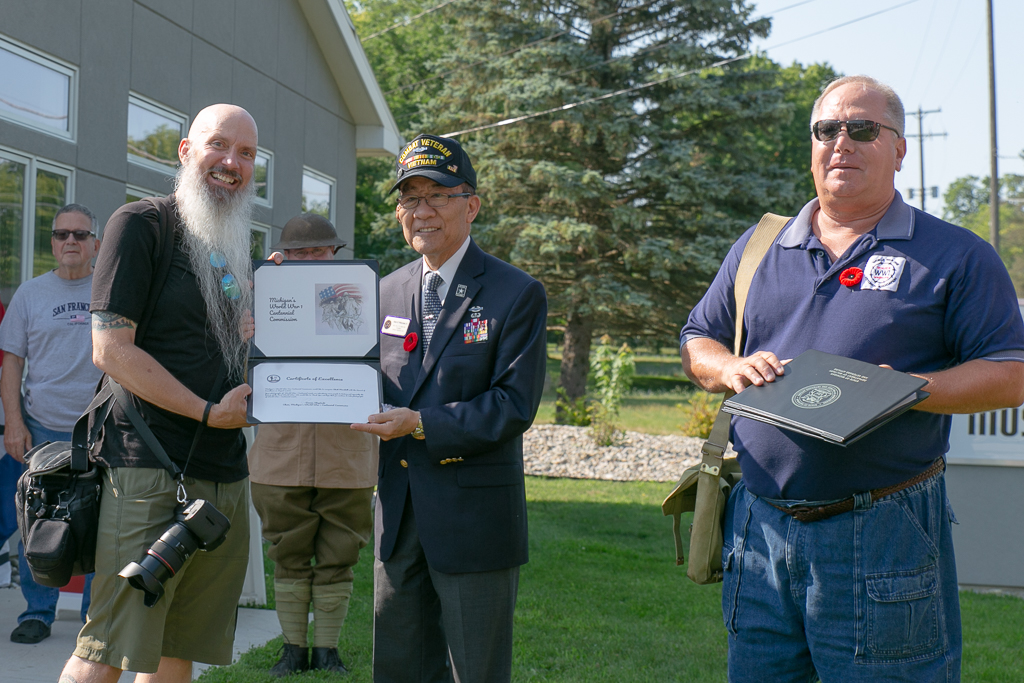 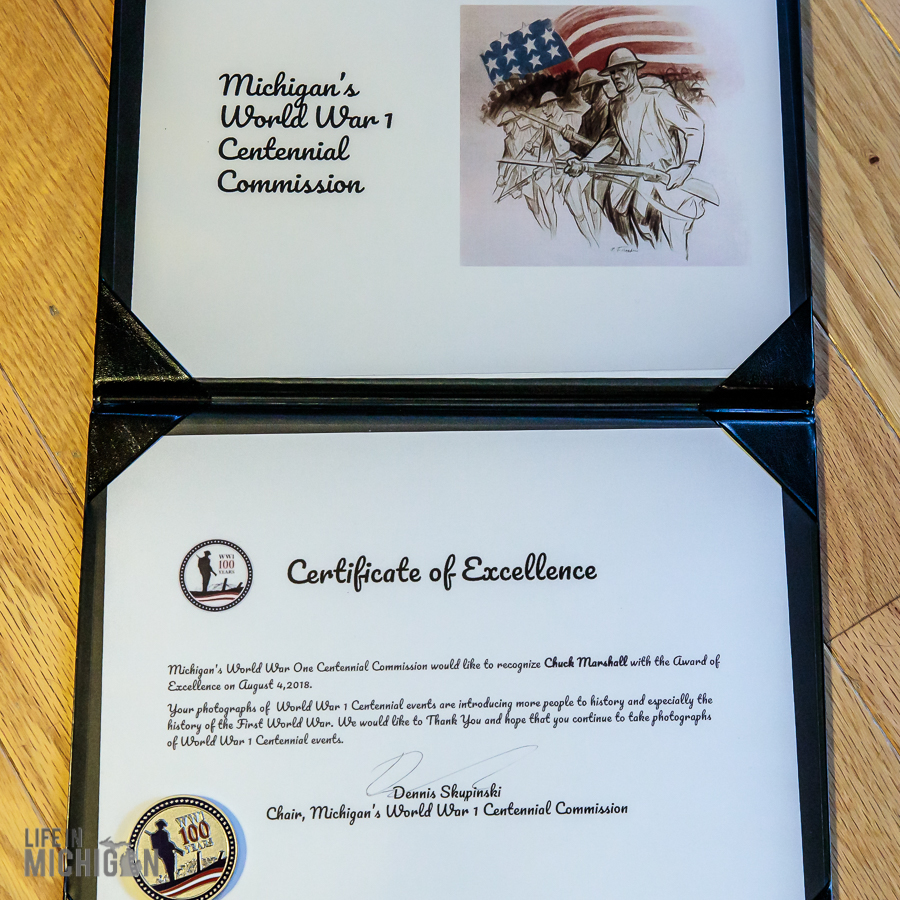 Also, honored for his tireless efforts to not only support the Michigan World War I Centennial events, but all facets of the Michigan Military Heritage Museum was Scott Gerych. Scott and his son Kevin are avid history enthusiasts putting their heart and soul into preserving the stories of Michigan veterans at the Michigan Military Heritage Museum. Because of dedicated people such as Scott, Dennis, Kevin, and everyone that volunteers for the Grass Lake Historical Connections, we have beautiful historical museums which keep Michigan’s past alive. 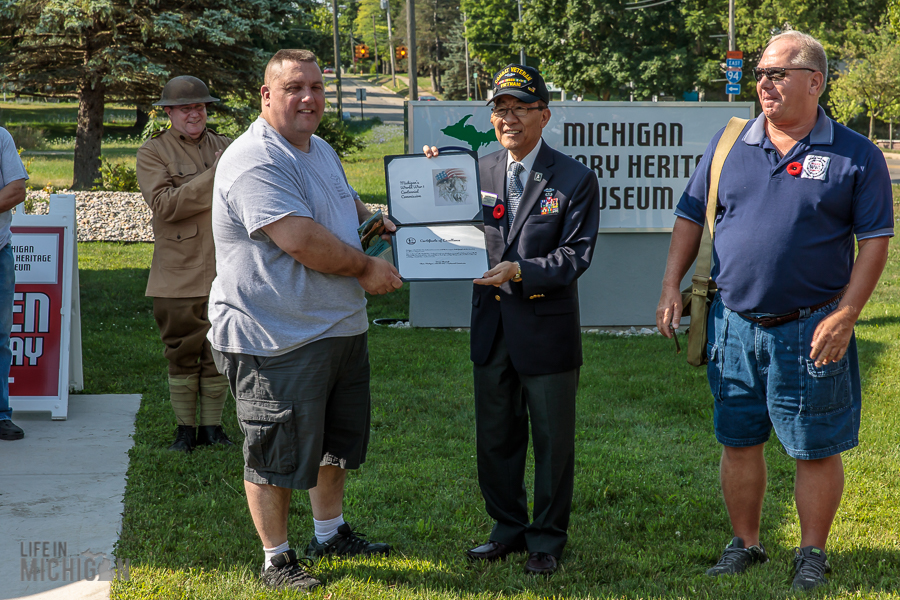 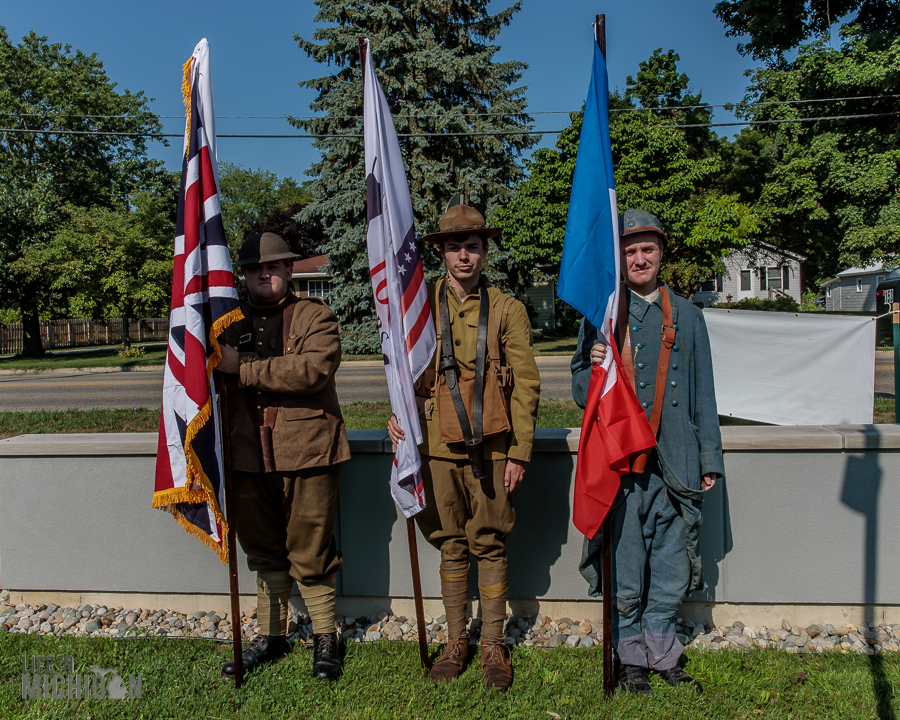 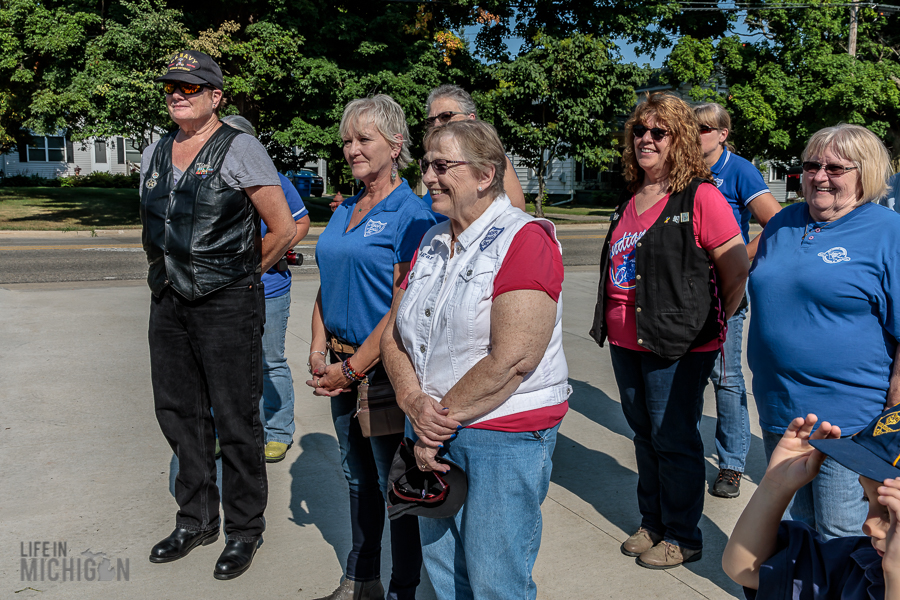 Home Front at the Coe House

World War I ushered in an era of mobilizing our entire country to focus on the war effort. At home, this meant planting victory gardens and conservation of resources. At the Coe House, the focus was on the Red Cross and home front activities. A big old tub of stone soup was cooking on an open fire while women worked on knitting socks for the young men heading overseas to the front. 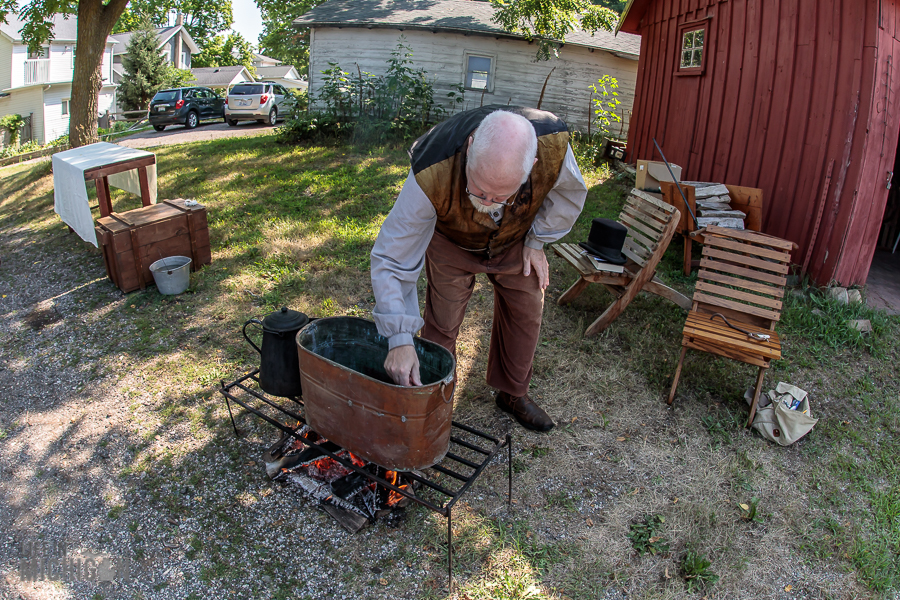 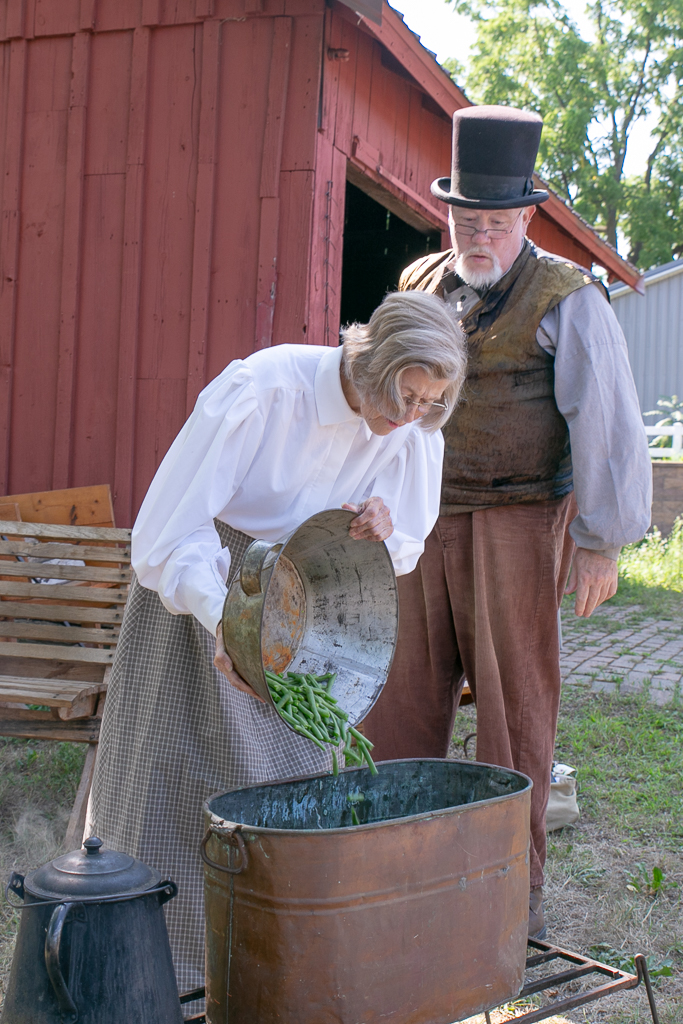 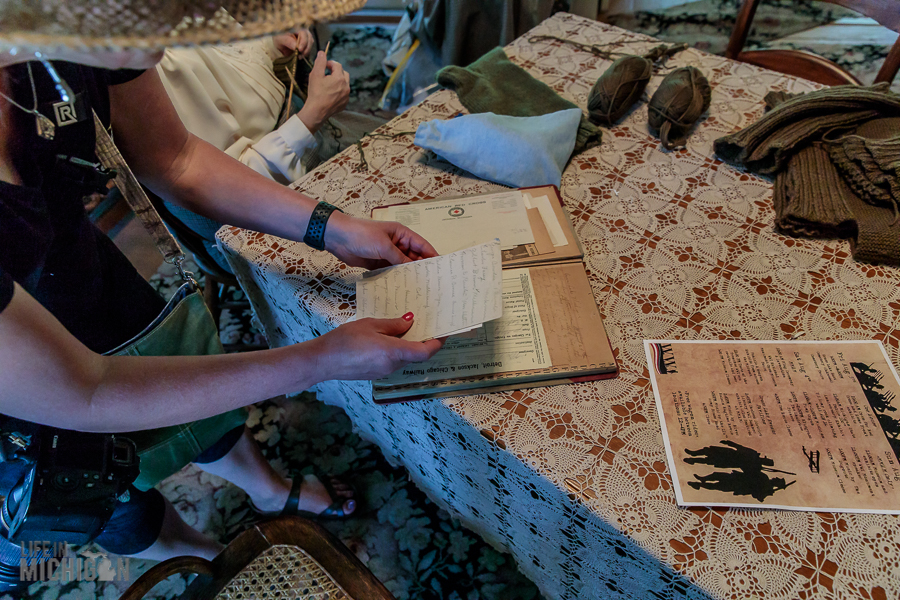 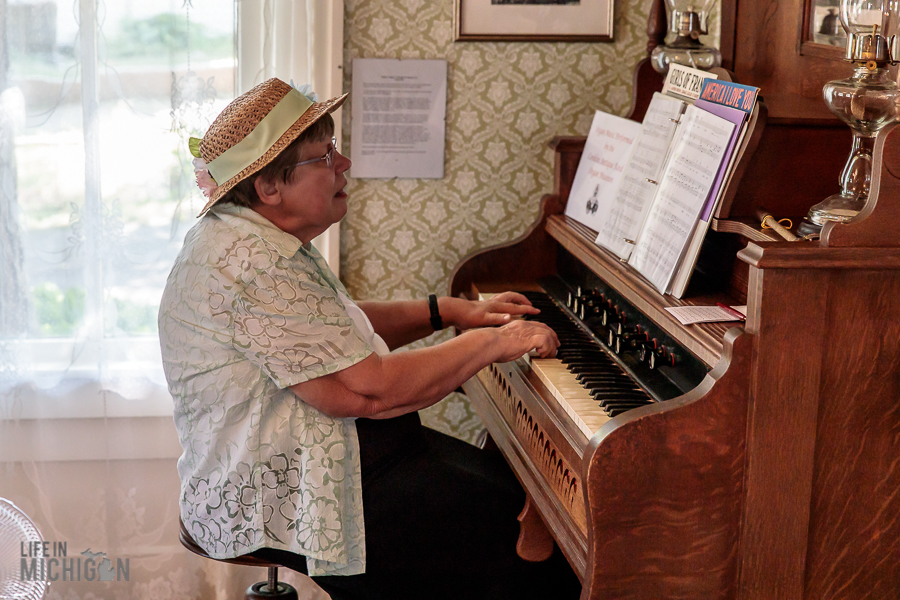 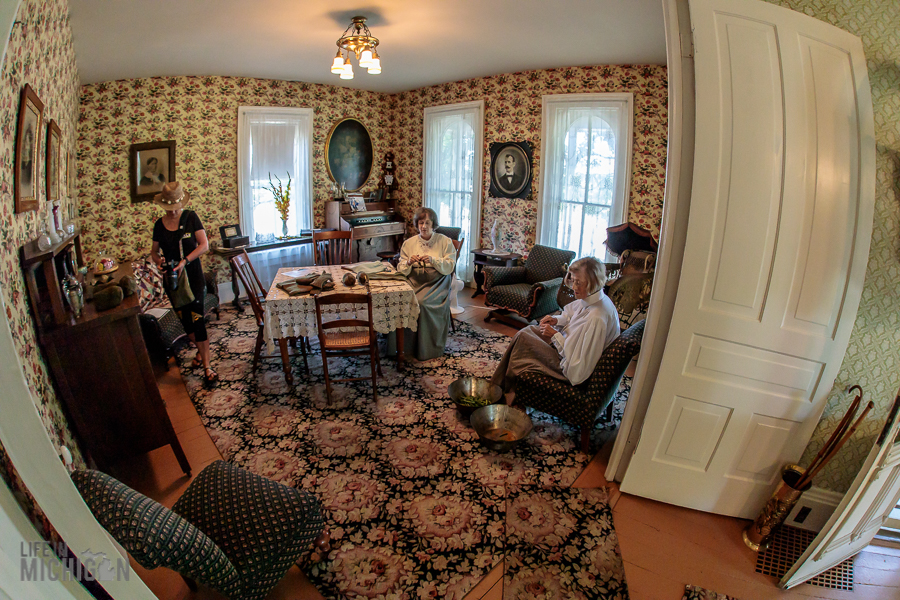 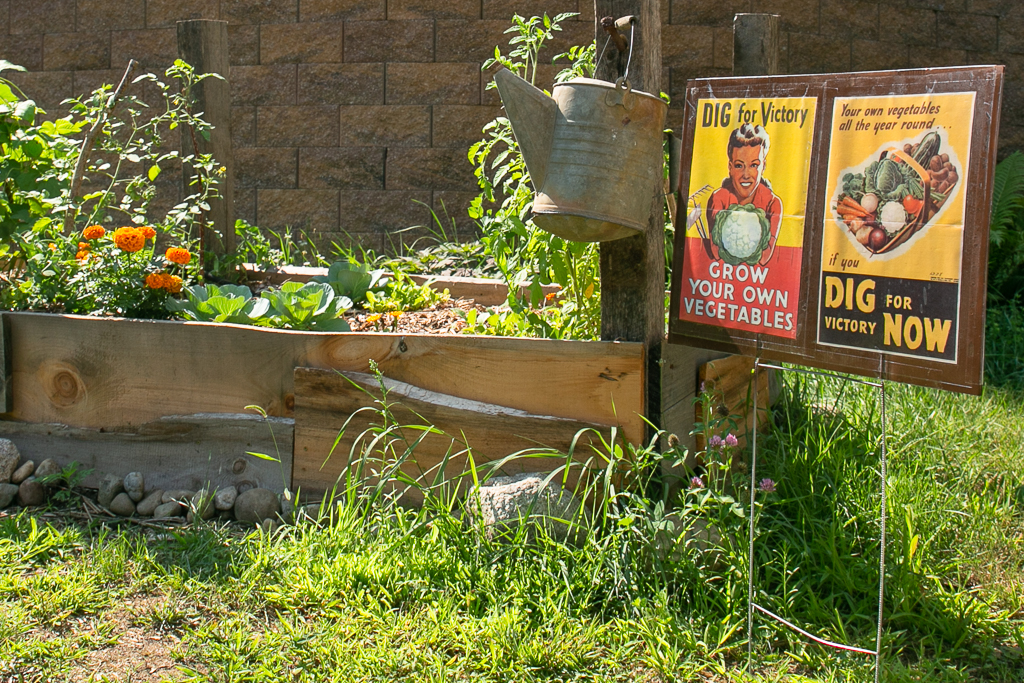 Did you know that the Michigan State police started as a temporary wartime emergency force during World War I? Either did we. On hand to celebrate 100 years of the Michigan State Police was Trooper Fletcher with a sweet 1957 cruiser and one of the 100 anniversary patrol cars. Many thanks to all the past and active troopers who help to protect Michigan residents. 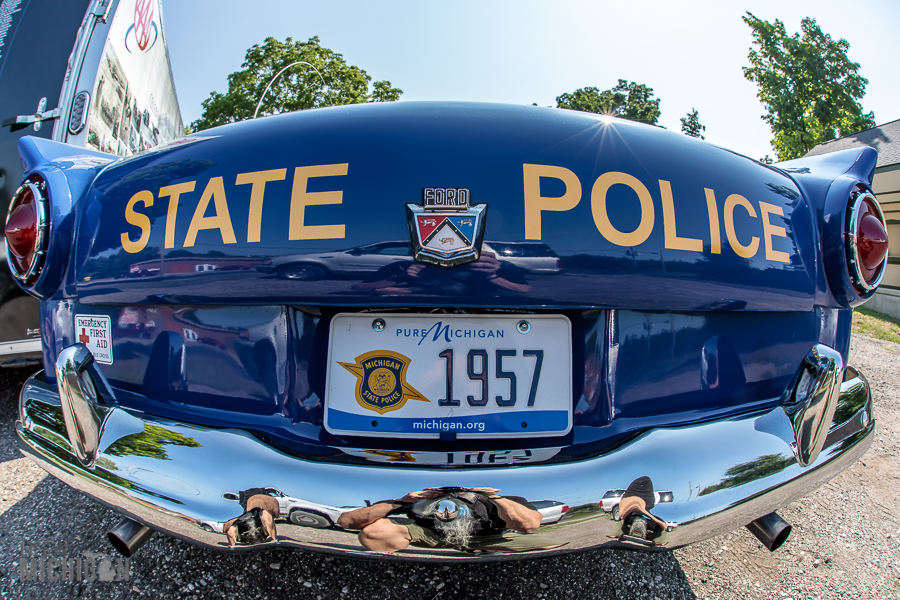 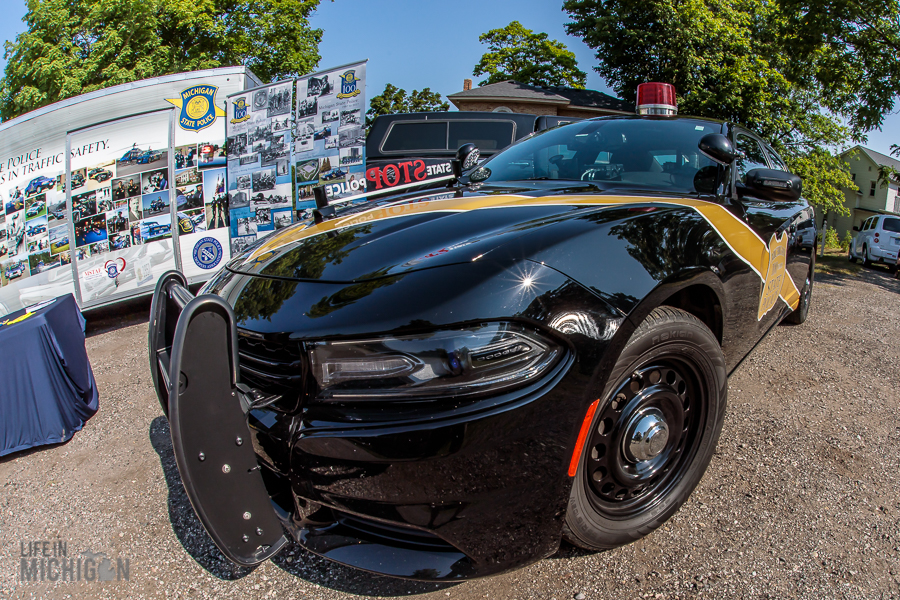 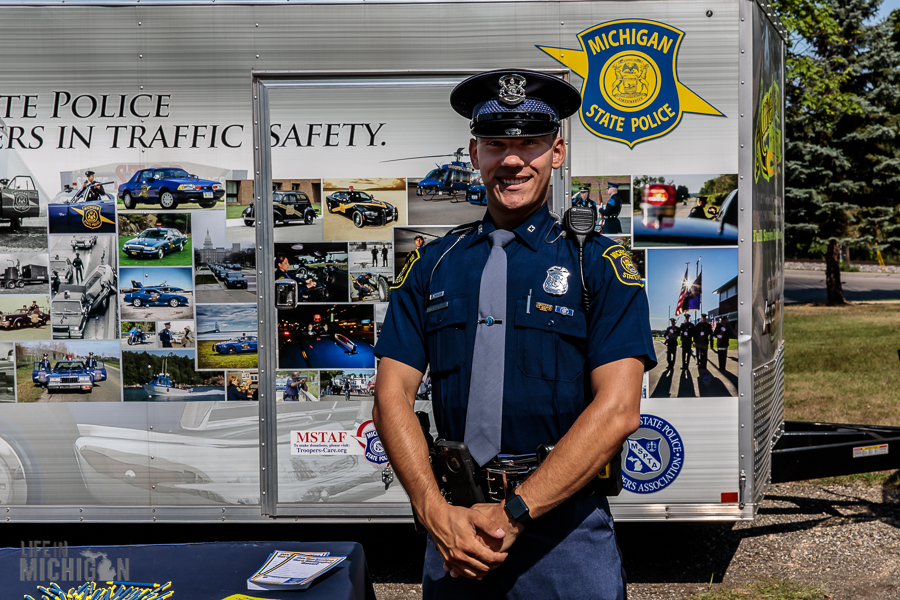 On top of all the informative displays and exhibits, the Over Here! Michigan World War I Centennial event included beer and period specific cocktails. Named after the French 75mm field gun, the French 75 made with gin, champagne, lemon juice, and sugar was spectacular. Just like the gun, this drink packs a punch. Who knew you could learn about history and enjoy a cocktail all in the same sitting. 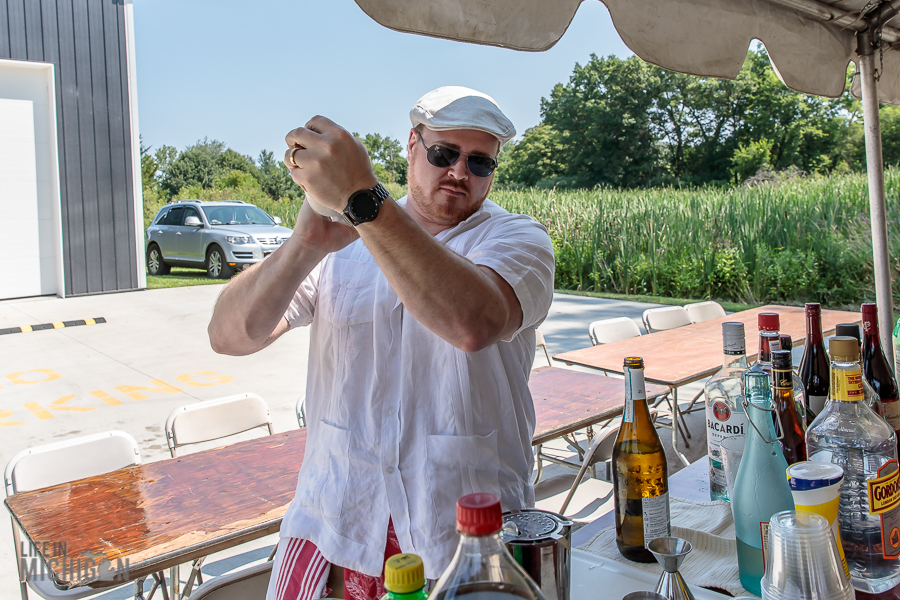 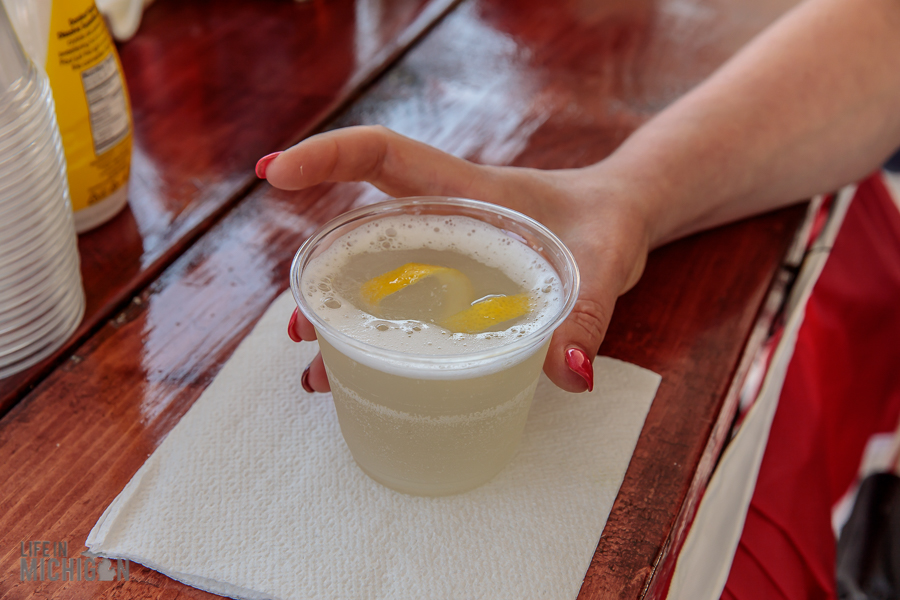 You still have time to visit the World War I exhibits at the Michigan Military Heritage Museum. The museum will be hosting a bell ringing on November 11th to commemorate Armistice Day and celebrate Veteran’s Day. The signing of the armistice marked the end of World War I.

The Michigan Military Heritage Museum and the Coe House are true Michigan treasures. Take a run out to Grass Lake and see for yourself. 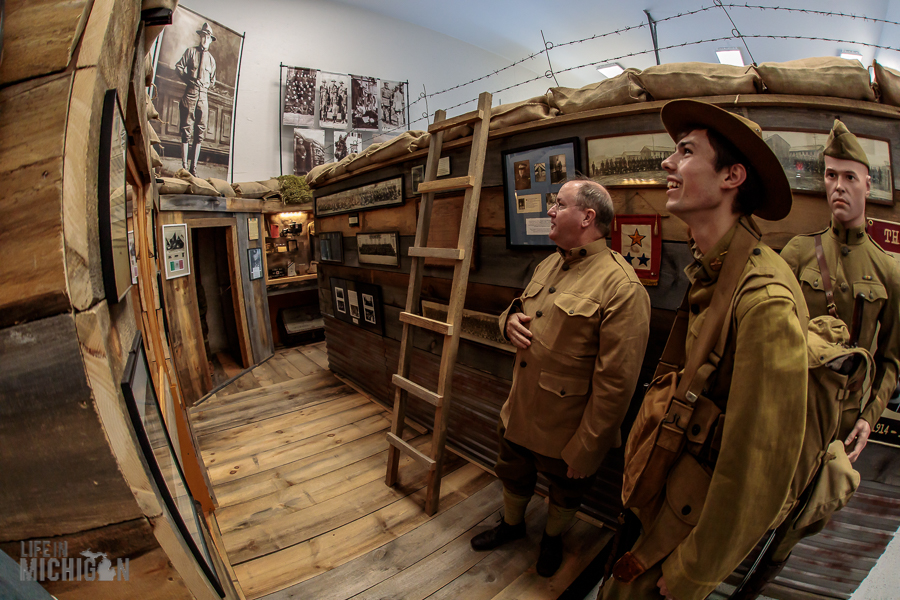 We hope you enjoyed our coverage of Over Here! Michigan World War I Centennial event.  If you enjoyed the story, then share it on your favorite social media venue or send it as a link to your friends and family. This is good for everyone! Don’t forget to check out our gallery for more pictures from the fest.

We’d really love it if you’d like our Facebook page. After you subscribe to our newsletter, Life In Michigan posts are delivered directly to your email box. You can also find us on Instagram. Cheer!