On May 14th Chuck and I attended a Patriots Grave Marking Service to honor Revolutionary War veterans Josiah Cutler and Benjamin Woodruff.  Phil Jackson with the Huron Valley Chapter of the Michigan Society Sons of the American Revolution (MiSSAR) invited us to the event to take pictures. It was my first Patriots Grave Marking Service and I am a bit embarrassed to say, prior to this event, I didn’t know much about the Sons of the American Revolution (SAR) or the origins of the various tributes performed during the event. 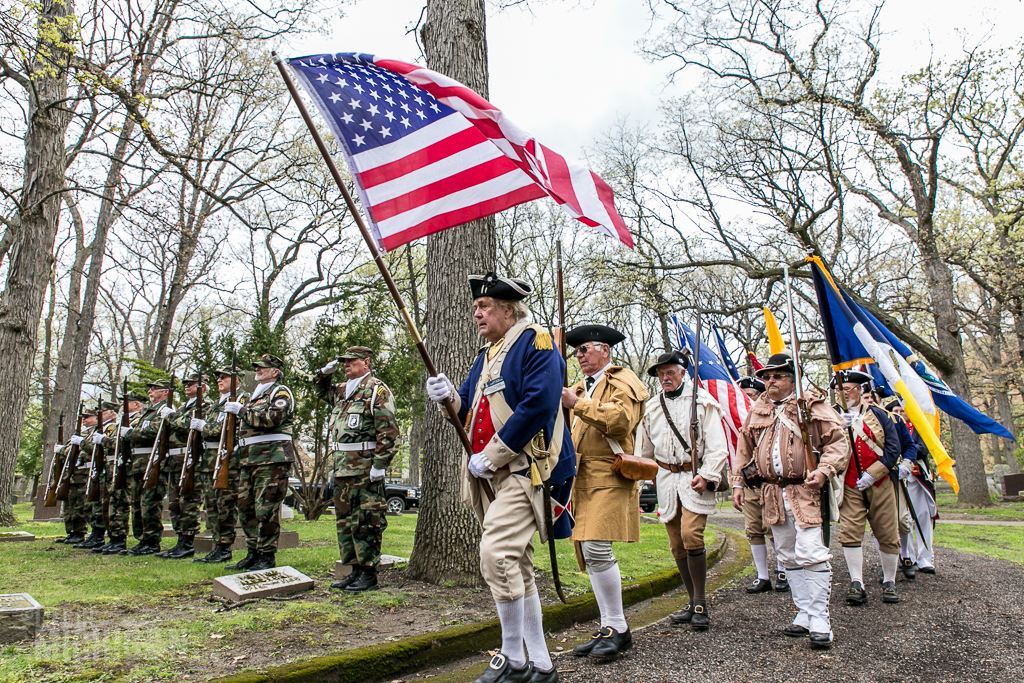 As was the custom in the early 19th century, the veterans were buried immediately after their death. This did not allow for military honors. The ceremony on Saturday was the equivalent of a funeral with full military honors.

Taken from the proclamations signed by the City of Ann Arbor’s mayor, Christopher Taylor:

Josiah Cutler was born on September 1, 1761 in Brookfield, Worcester County, Massachusetts. He enlisted four times beginning in January 1778 and served for approximately four years, 10 months during which time he fought in the Battle of Kingsbridge and stormed the redoubt at Yorktown, Virginia under the command of General Lafayette.Corporal Josiah Cutler was honorably discharged from the Second Massachusetts Regiment on January 4, 1784. He moved to Pittsfield Township, Michigan in April 1840 where he died at the age of 78 on June 24, 1840 and was buried in the Whitmore/Pioneer Cemetery in Pittsfield Township. On April 14, 1886, his remains were moved to Forest.

Benjamin Woodruff was born on November 26, 1744 in Hanover Township, Morris County, New Jersey. He first enlisted in 1776 as a drummer and multiple times afterwards as a Sergeant in the New Jersey Militia where he fought in the battles of Elizabethtown and Springfield and the skirmish at Acquacvkanonk.  Sergeant Woodruff served honorably until the end of the war for or a total of approximately two years. At the age of 92 he traveled to Pittsfield Township, Michigan, where he died shortly before his 93rd birthday on October 18, 1837. He was buried in the Whitmore/Pioneer Cemetery in Pittsfield Township and his remains were moved to Forest Hill Cemetery approximately 50 years later.

Both veterans had direct descendants in the audience. Some traveled from Chicago and Traverse City to participate in the ceremony. And many were meeting for the first time. 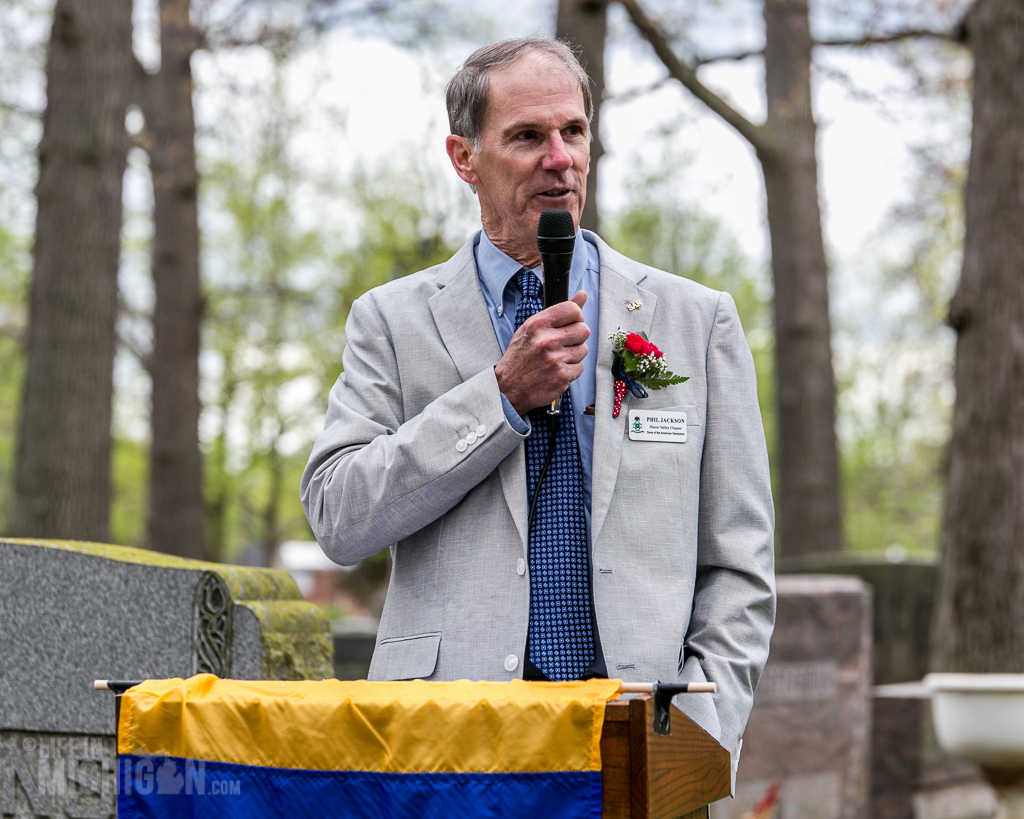 Posting of Colors and Standards 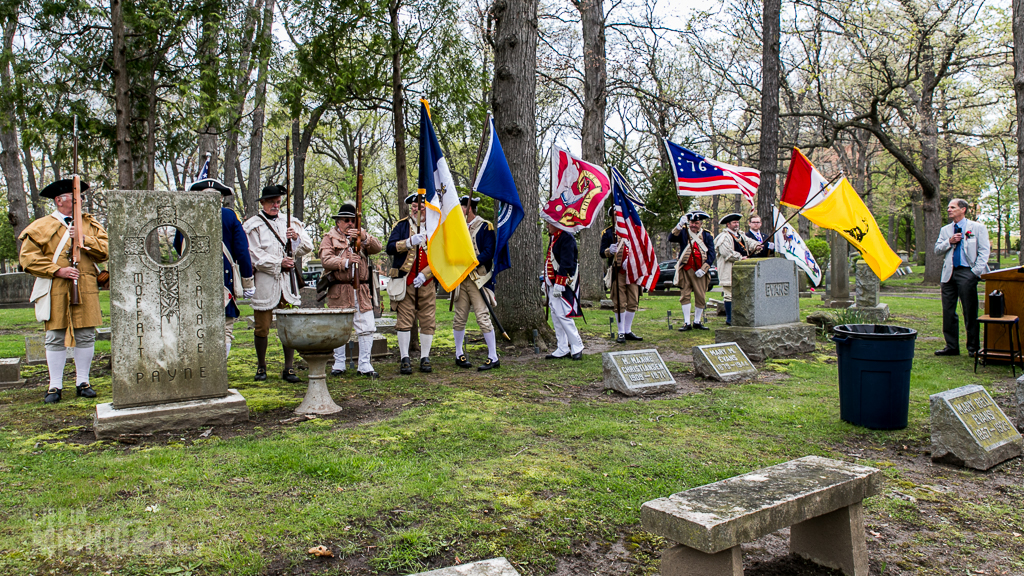 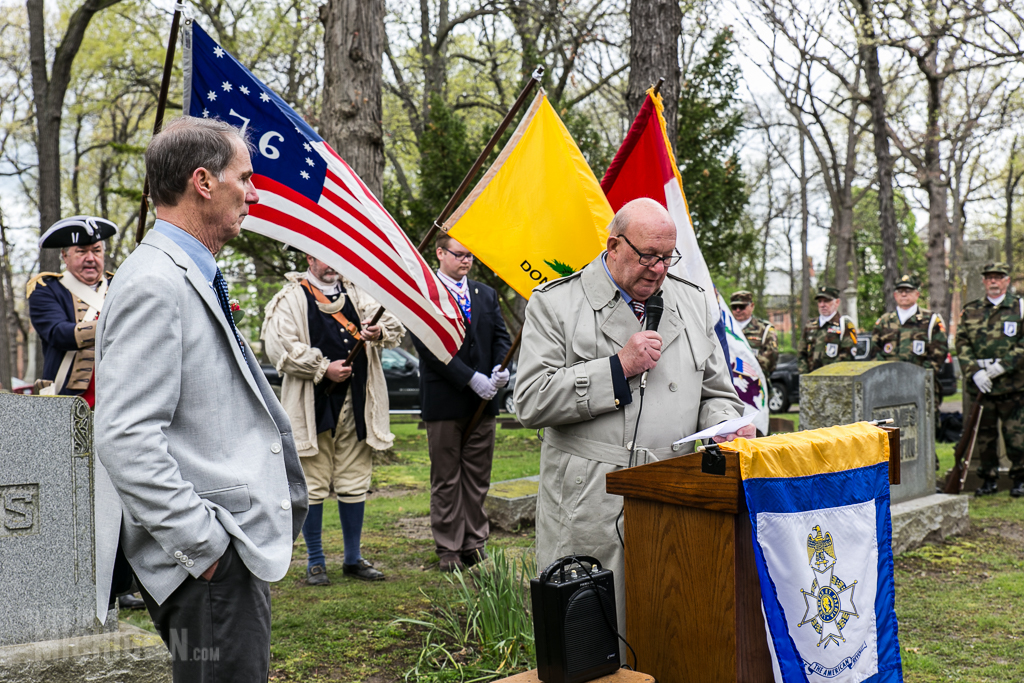 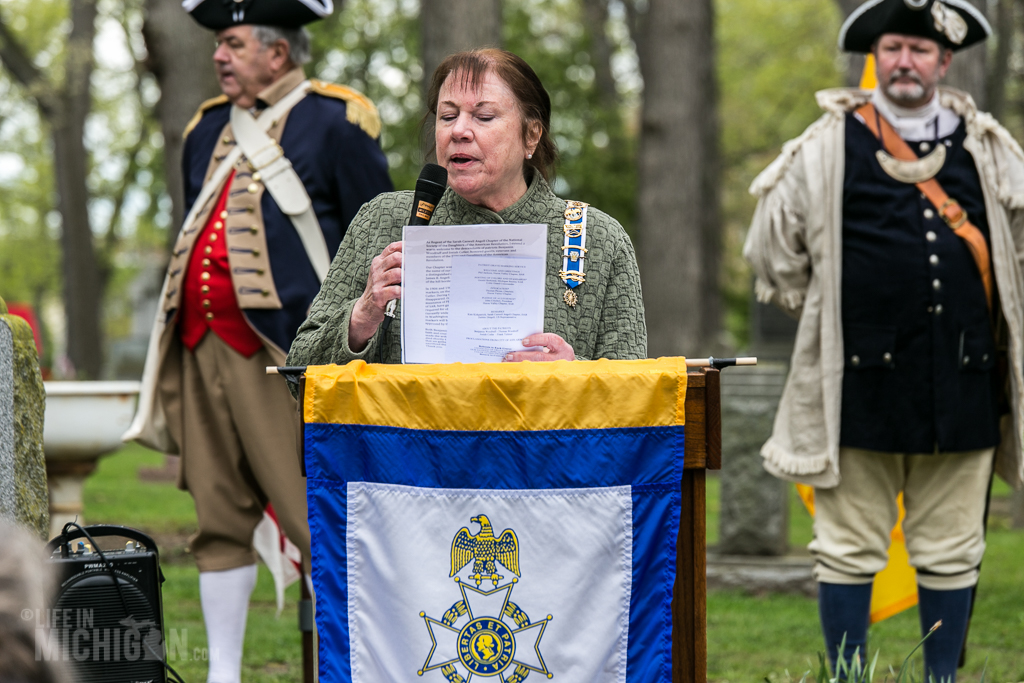 Thomas Woodruff and Frank Ticknor, direct descendants of the veterans shared a bit of history about the veterans. 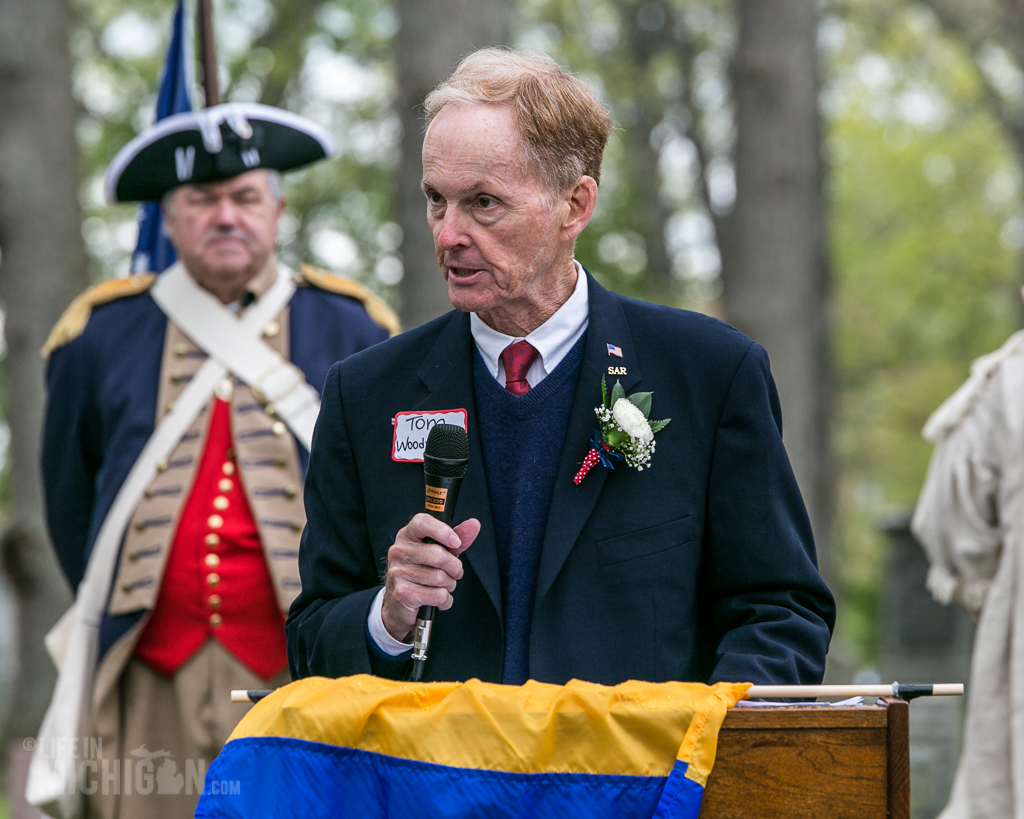 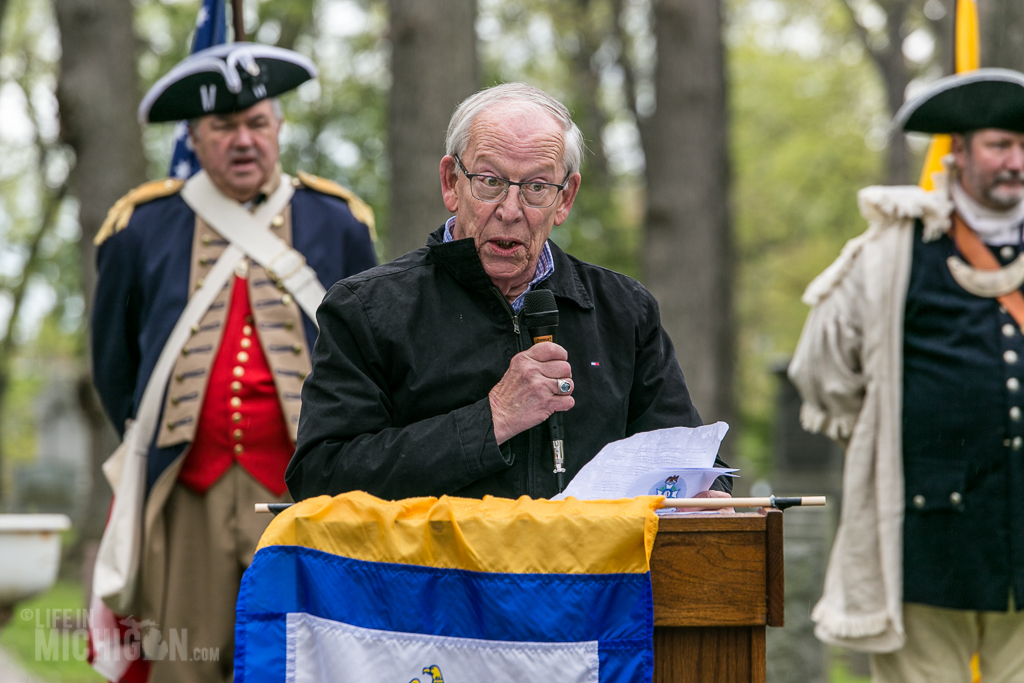 New memorial markers were installed on their graves. 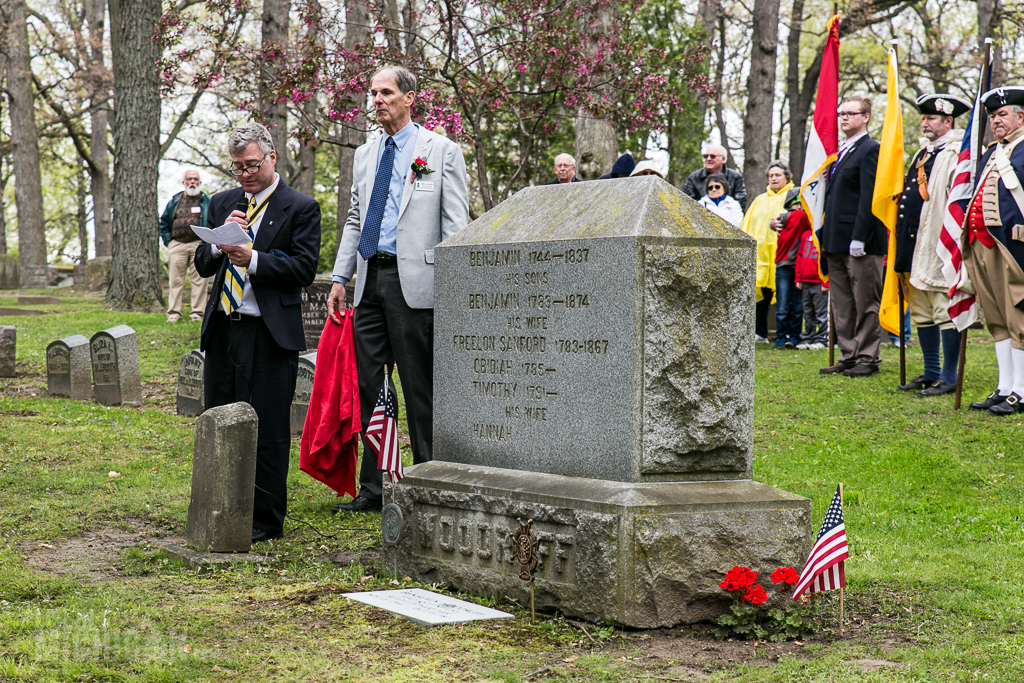 Josiah Cutler’s headstone was restored prior the event. 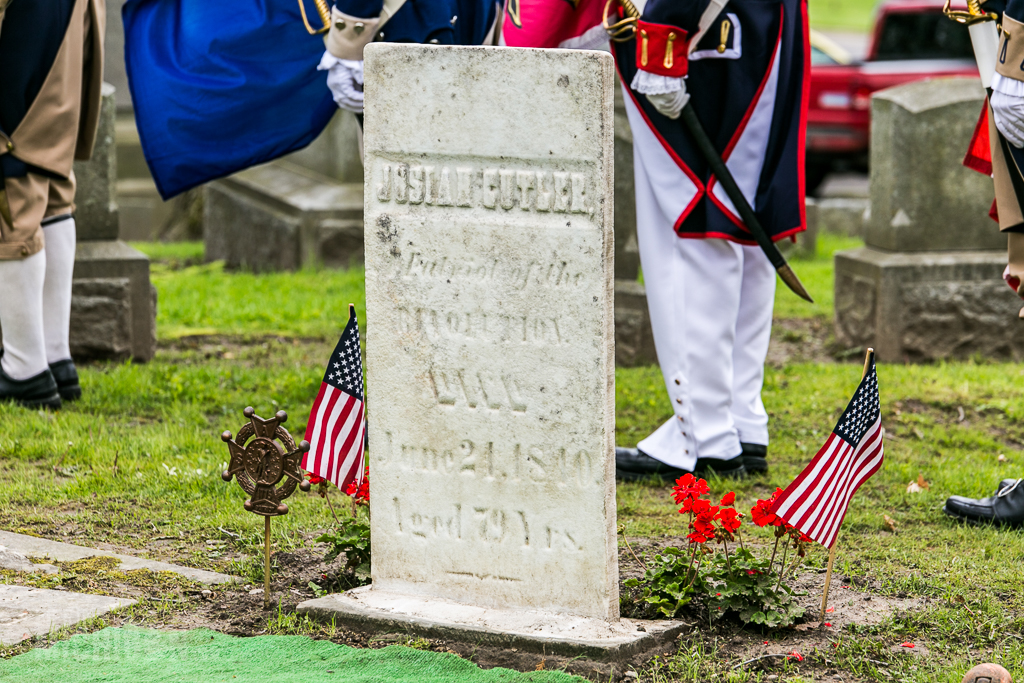 Our Nations Tribute (folding of the flag)

During the folding of the flag, a recitation was said to describe the symbols for the folds after which there was a presentation of the flag to the veterans descendants. 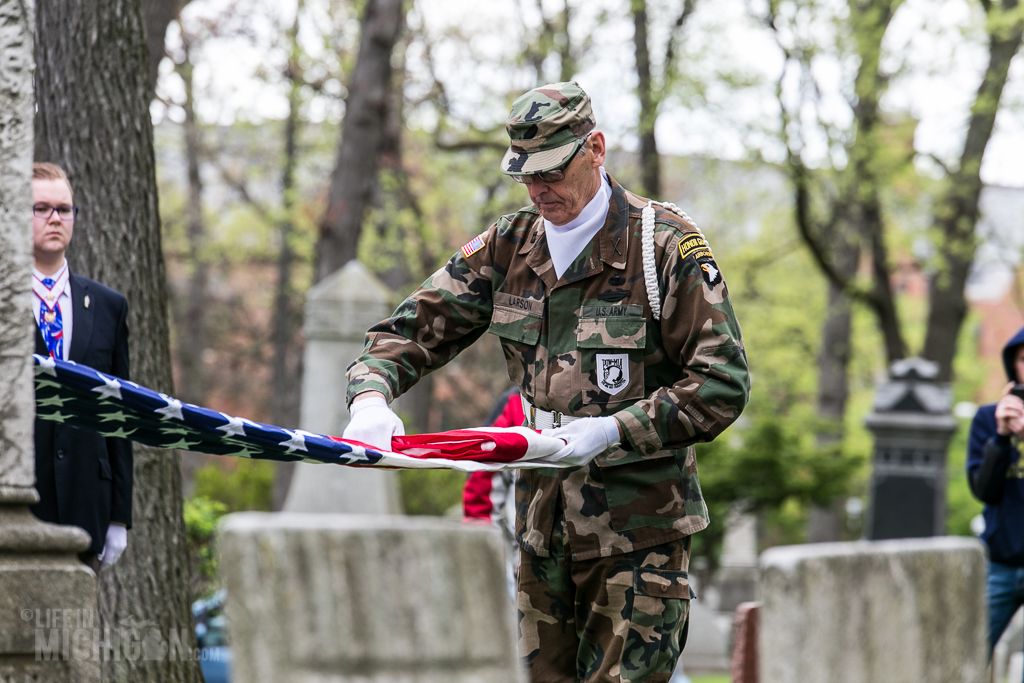 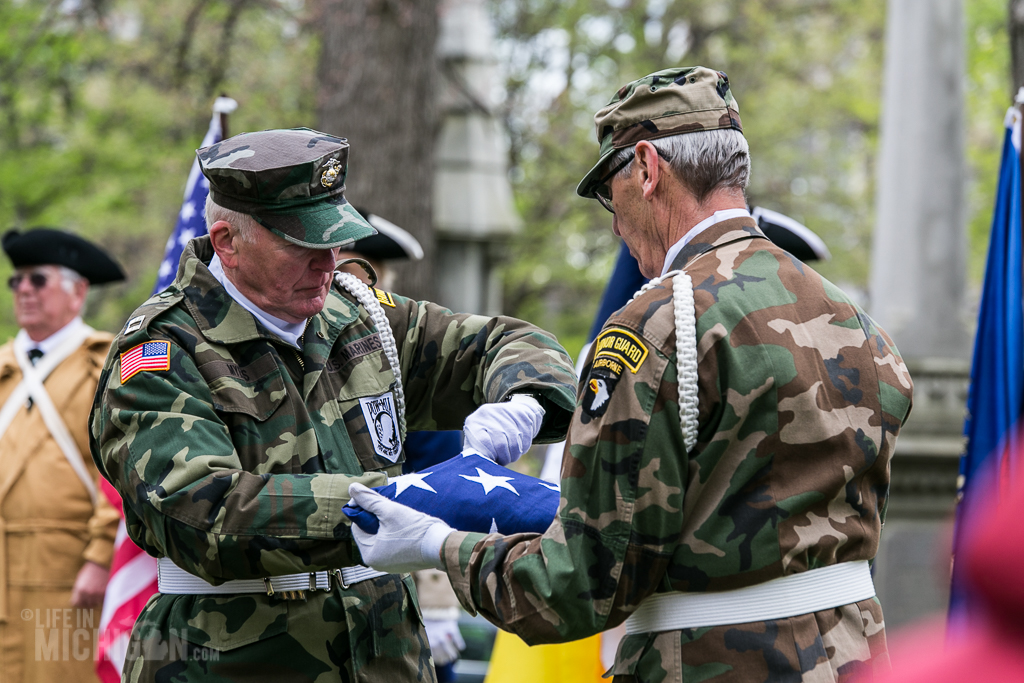 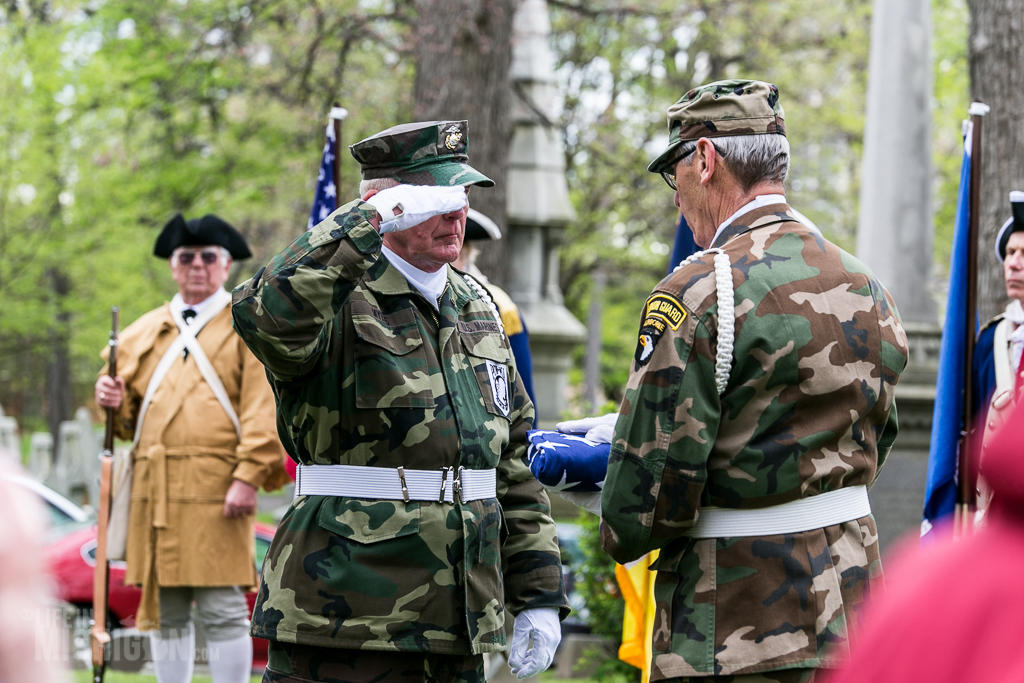 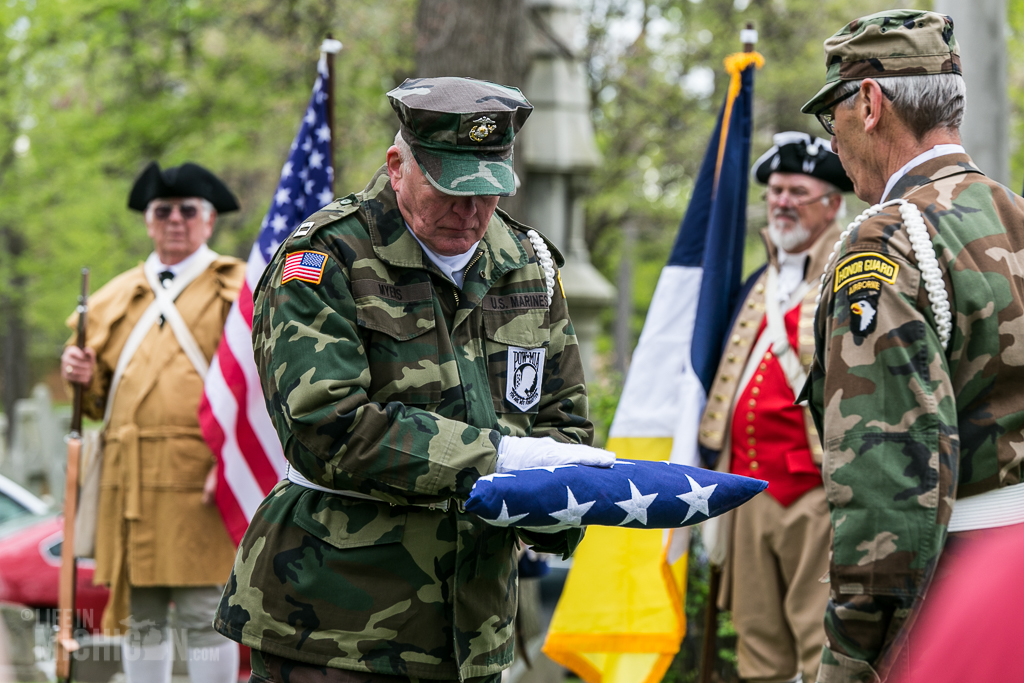 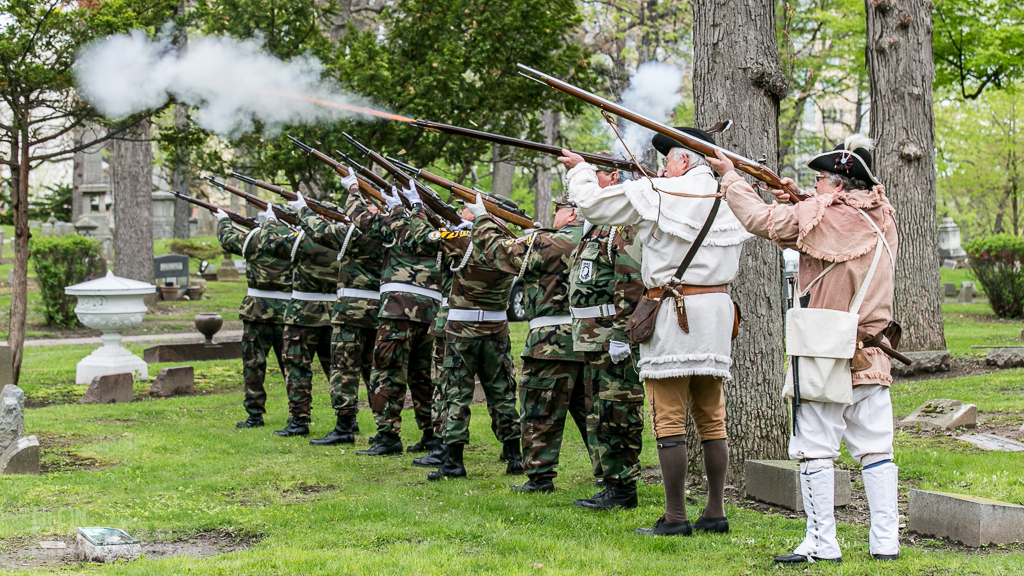 The Color Guard tipped their hats to honor the patriot and bowed in humility for the person’s service to us and the country. 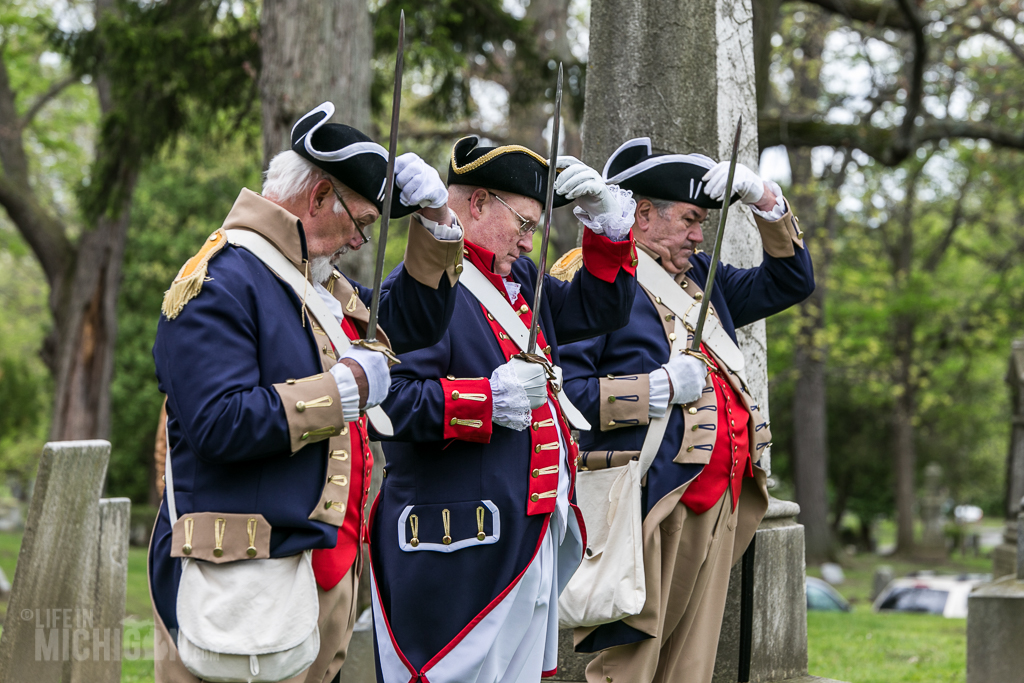 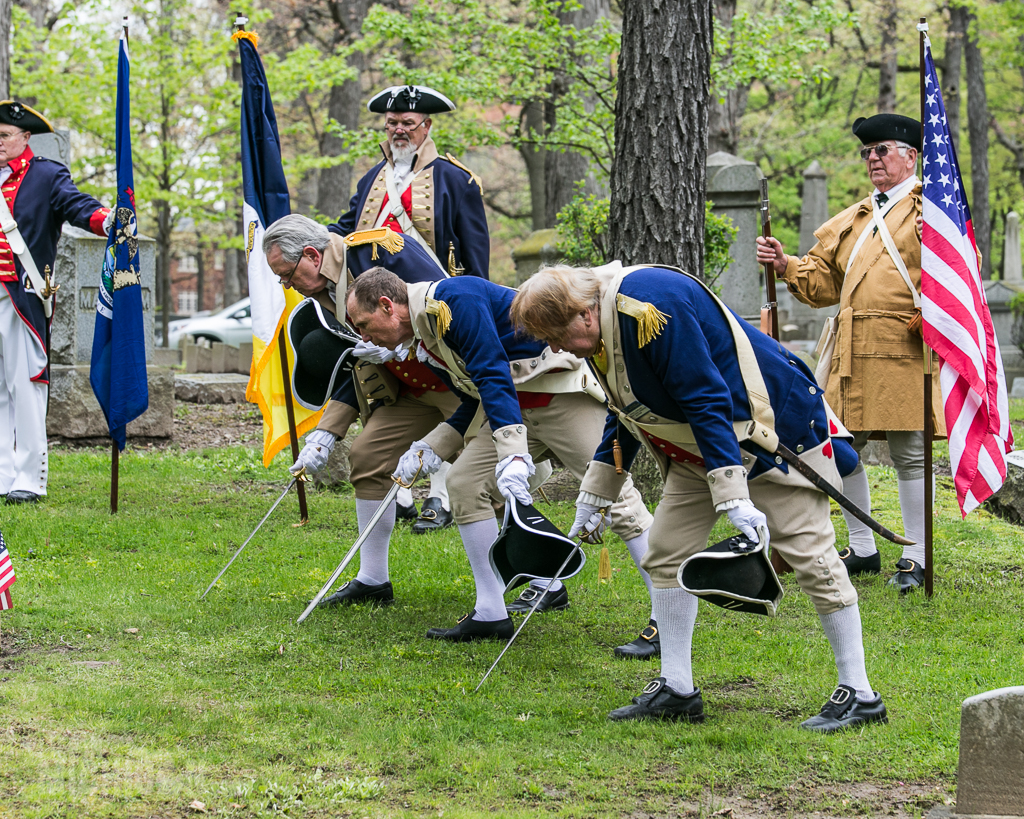 Ralph Harris was the Bugler on Saturday and he did a fine job too. 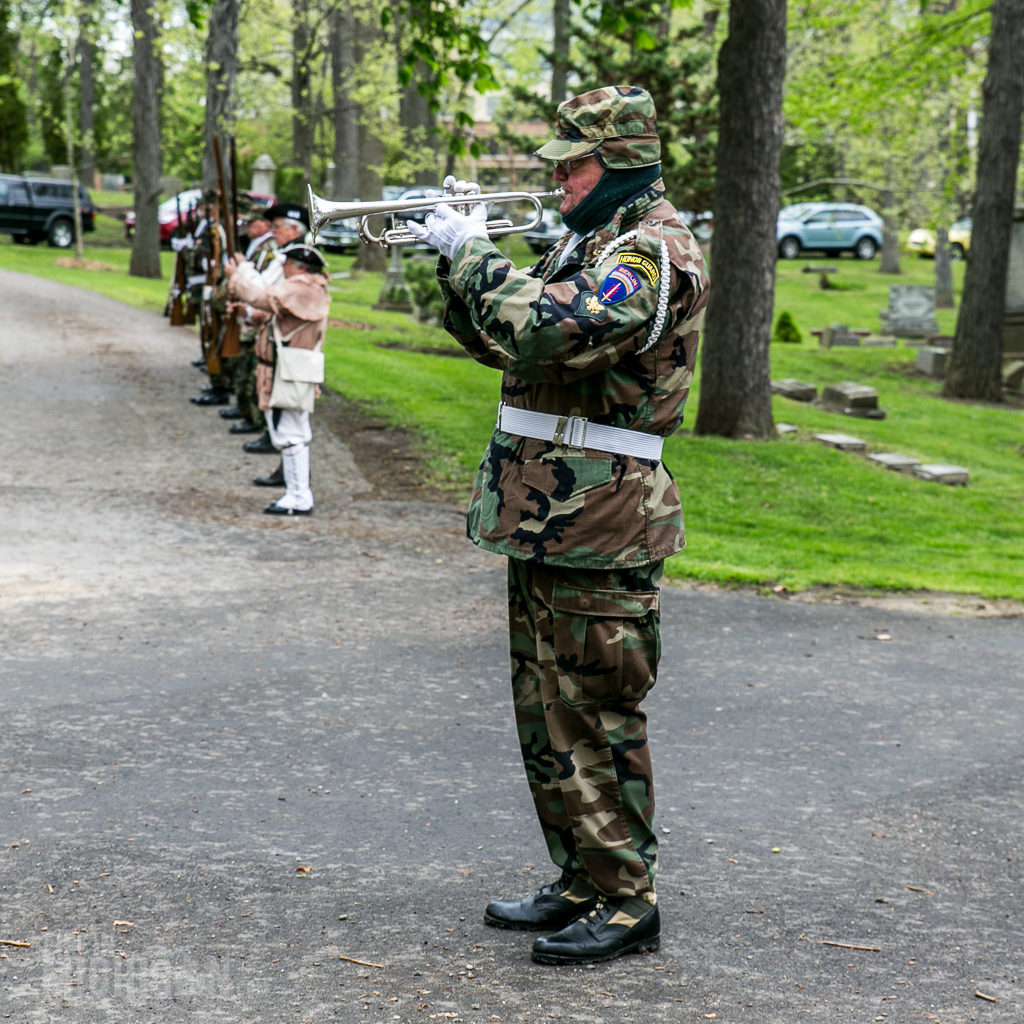 I can’t help but get choked up when I hear those haunting notes. During the ceremony the history of the Taps was shared. I didn’t write it down, but I found this on the Taps Bugler Website

As the story goes, General Butterfield was not pleased with the call for Extinguish Lights, feeling that the call was too formal to signal the days end, and with the help of the brigade bugler, Oliver Willcox Norton (1839-1920), wrote Taps to honor his men while in camp at Harrison’s Landing, Virginia, following the Seven Days battle. These battles took place during the Peninsular Campaign of 1862. The new call, sounded that night in July, 1862, soon spread to other units of the Union Army and was reportedly also used by the Confederates. Taps was made an official bugle call after the war. 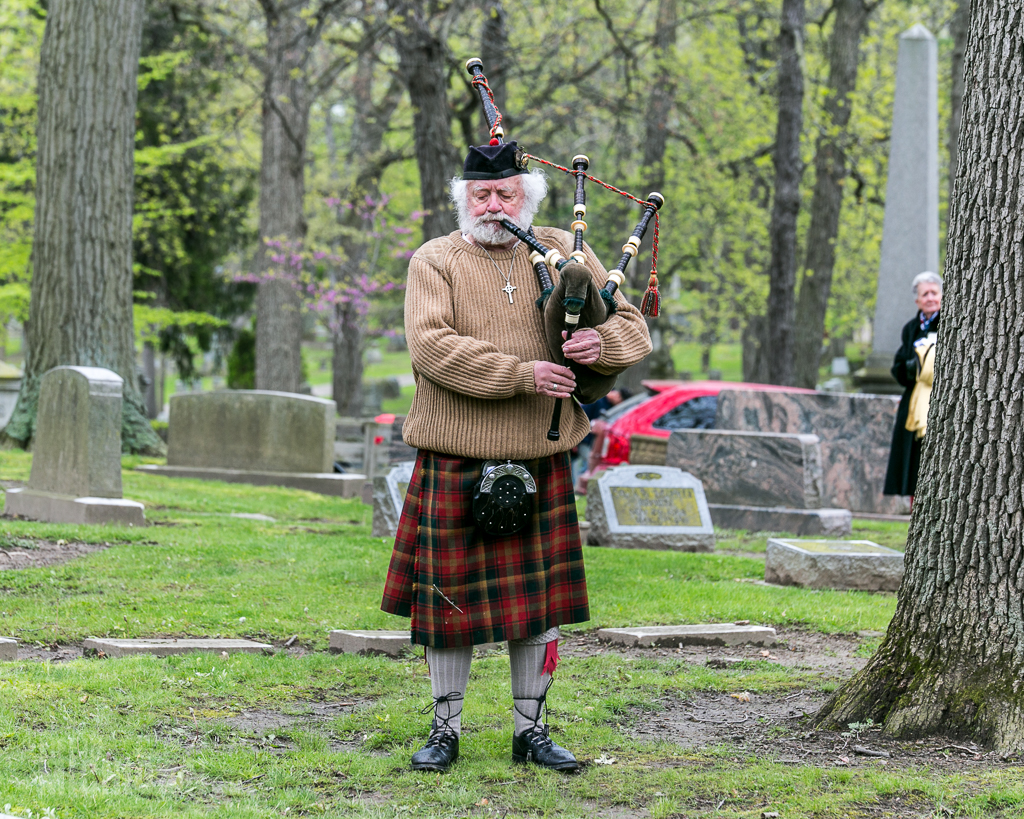 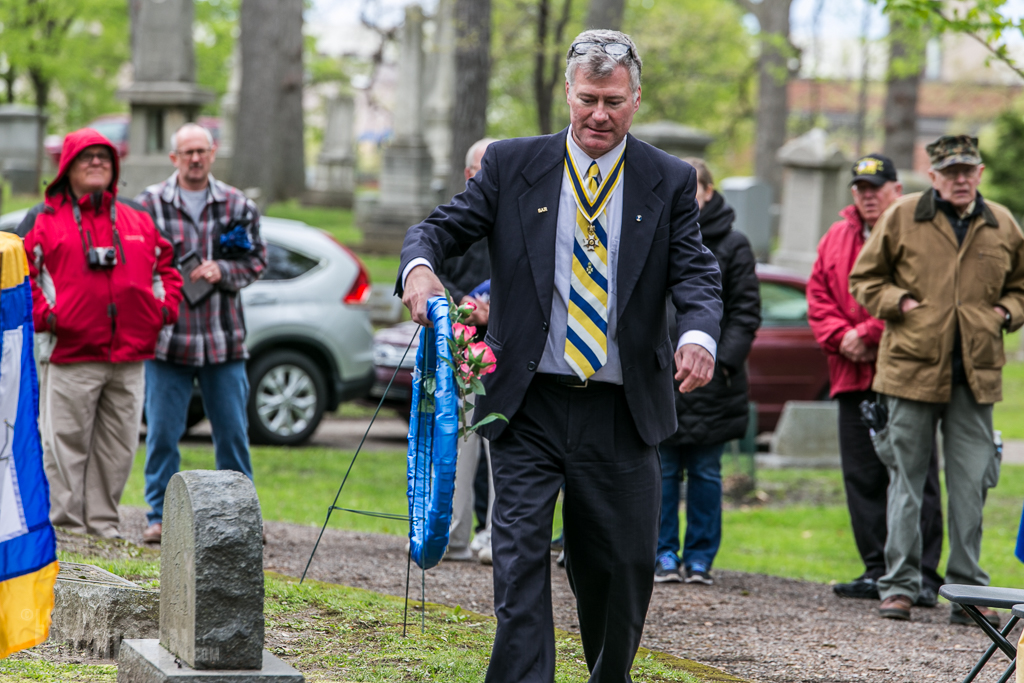 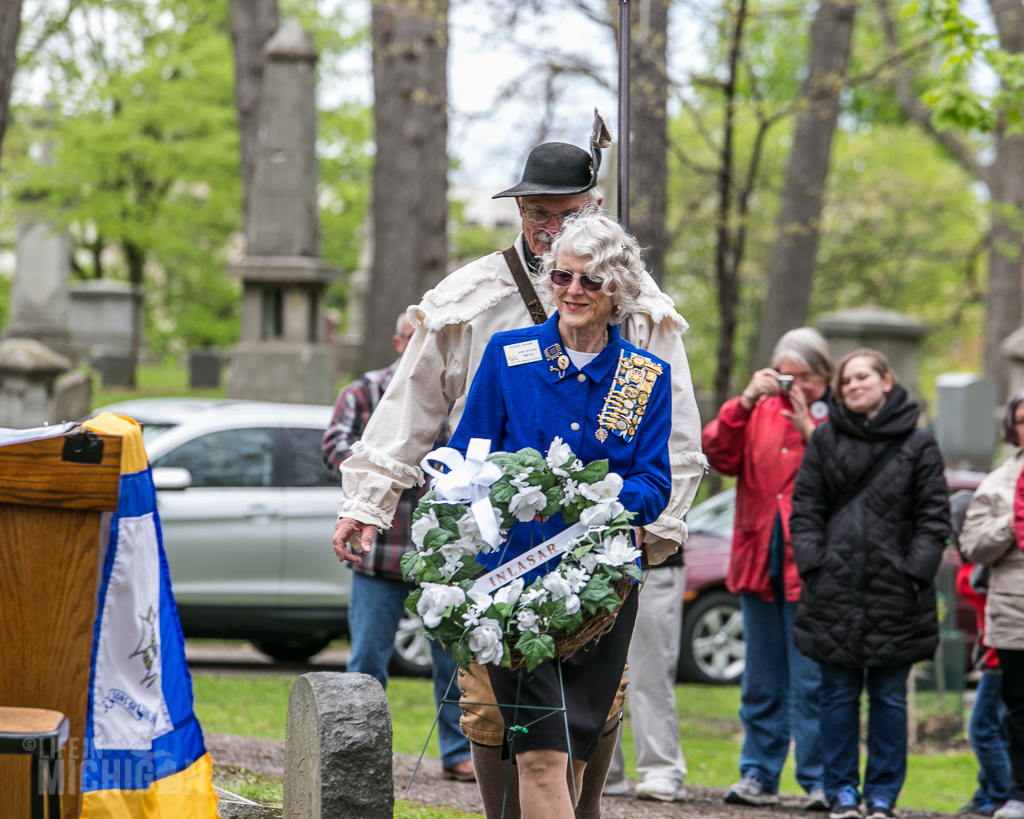 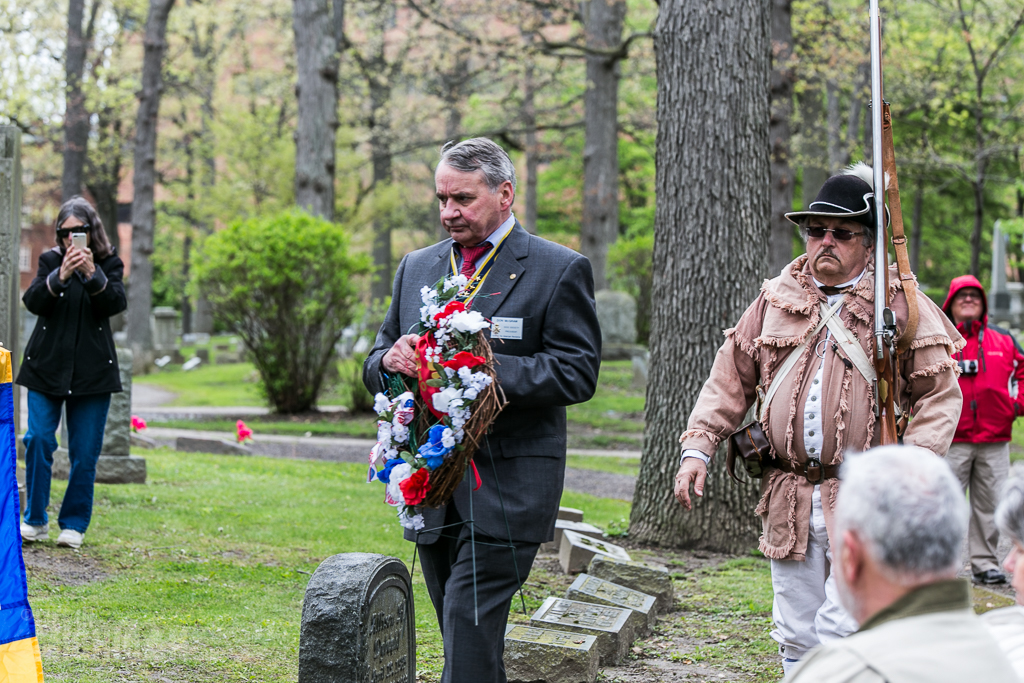 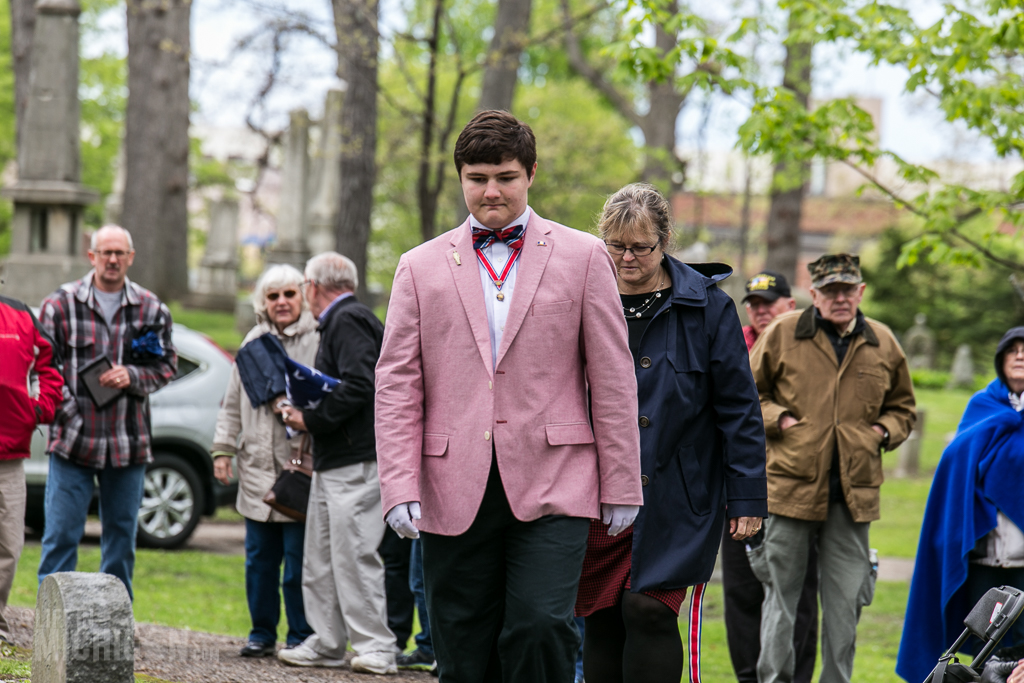 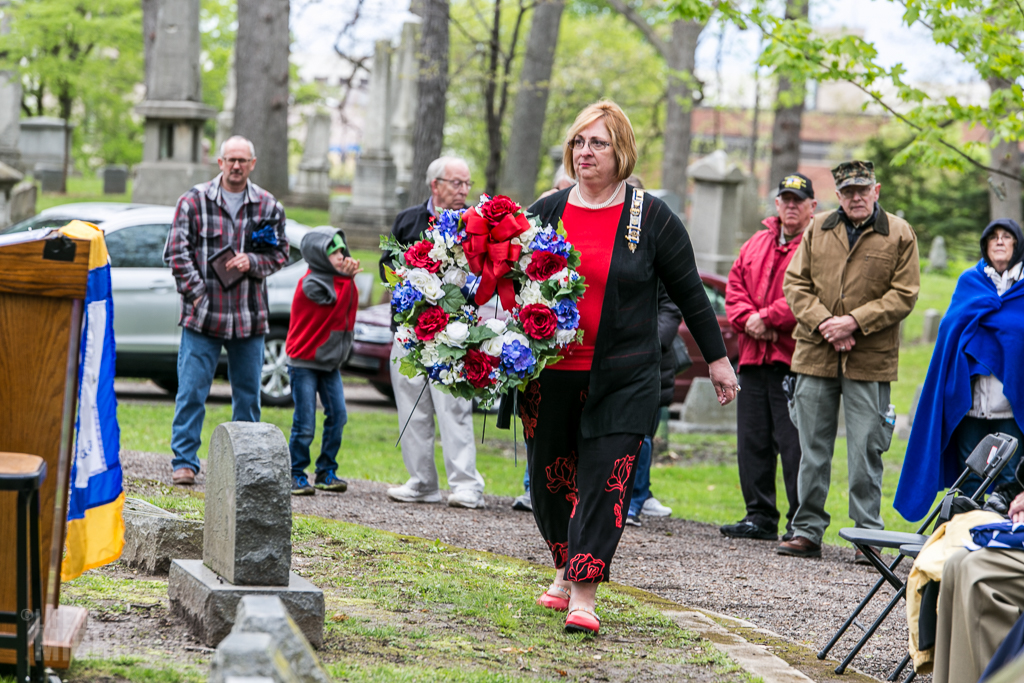 Sons of the American Revolution (SAR)

The National Society for the Sons of the American Revolution website is jammed with great information. Here is a little bit of what I found describing the SAR:

In 1876 there were many celebrations to commemorate the centennial of the signing of the Declaration of Independence on July 4, 1776. As part of this patriotic fervor, a group of men in the San Francisco, California, area who were descendants of patriots involved in the American Revolution, formed an organization called the Sons of Revolutionary Sires. Their objective was to have a fraternal and civic society to salute those men and women who pledged their lives, fortunes and sacred honor to the battle for independence from Great Britain. They desired to keep alive their ancestors’ story of patriotism and courage in the belief that it is a universal one of man’s struggle against tyranny — a story which would inspire and sustain succeeding generations when they would have to defend and extend our freedoms.

Out of the Sires grew the National Society of the Sons of the American Revolution, which was organized on April 30, 1889 — the 100th anniversary of the inauguration of George Washington as our nation’s first President. We have used the acronym SAR to identify ourselves for over 100 years. The SAR was conceived as a fraternal and civic society composed of lineal descendants of the men who wintered at Valley Forge, signed the Declaration of Independence, fought in the battles of the American Revolution, served in the Continental Congress, or otherwise supported the cause of American Independence. The National Society was chartered by an Act of the United States Congress on June 9, 1906. The charter was signed by President Theodore Roosevelt, who was a member of the SAR. The charter authorizes the granting of charters to societies of the various states and territories and authorizes the state societies to charter chapters within their borders.<ahref=”http://www.sar.org/node/117″ target=”_blank”> Federal Legislation that established a federal charter for the National Society SAR.

We’ve more pictures in our gallery. We don’t mind if you download the pictures and share on your favorite social media sites, but please give Chuck or LifeInMichigan photo credit and don’t remove the watermark.

If you liked reading about the Patriots Grave Marking Service, then please share it on your favorite social media venue or send it as a link to your friends and family. If you’ve got a story to share or just want to say hi, please leave a comment.