On Saturday, June 6th we found ourselves standing outside the Point Bar & Grill in Flint, Michigan practicing our technique for the Rock, Paper Scissors, Tournament, which was to commence at 8 pm. Our friend, Cowboy Doug (aka Hopman), invited us and promised it would be a good time. 51 North Brewery was doing a tap takeover, so the beer would be delicious. And it was a fundraiser.  The reasons why we were practicing our Rock Paper Scissors technique were increasing. The Knights of the Drinking Templar and  J.P. O’Sullivian organized the Rock Paper Scissors Tournament to raise money for the Eastern Michigan Food Bank the Carriage Town Ministries.

Fun, drinking and raising money for a great cause, LifeInMichigan was in.

Did you know there is a World Rock Paper Scissors Society? I didn’t either until I consulted Wikipedia. The things the internet knows! I thought it was at best a game of luck, but apparently there is a bit of strategy involved. 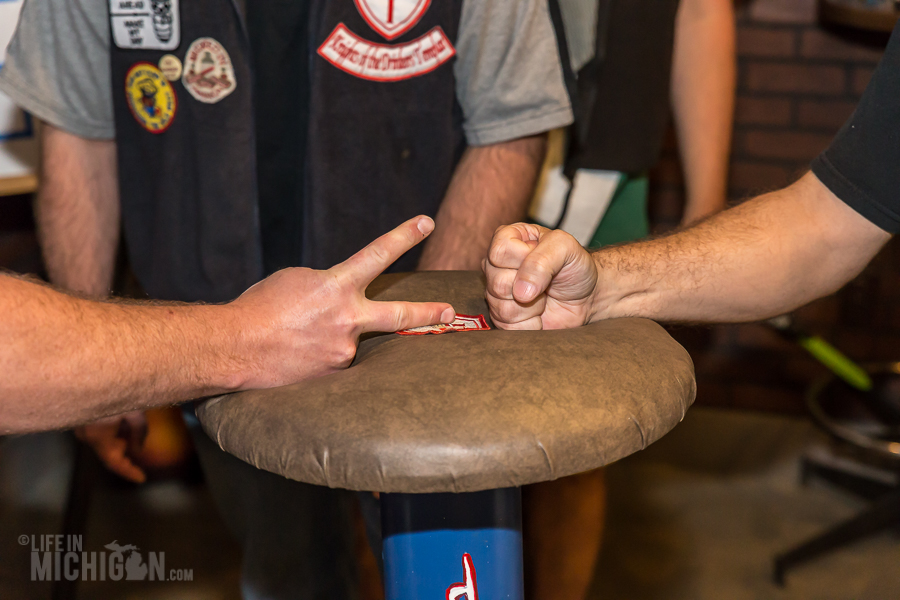 The Knights of the Drinkers Templar

The Knights of the Drinkers Templar is a drinking club with a mission to have fun while drinking and earn “patches” for everyone’s entertainment. 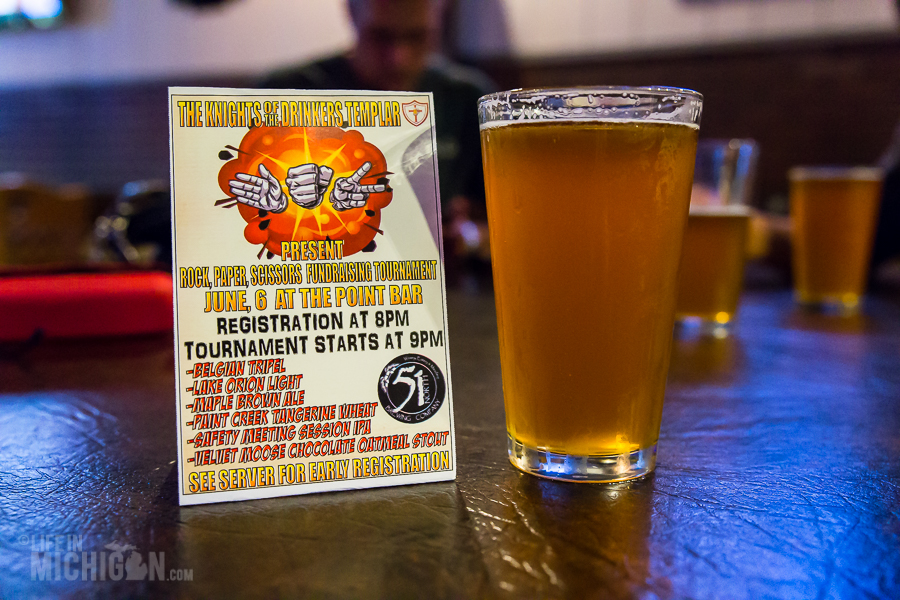 Drinking beer out of your shoe earns you the “Hiking” patch. That Chuck Taylor will never be the same. 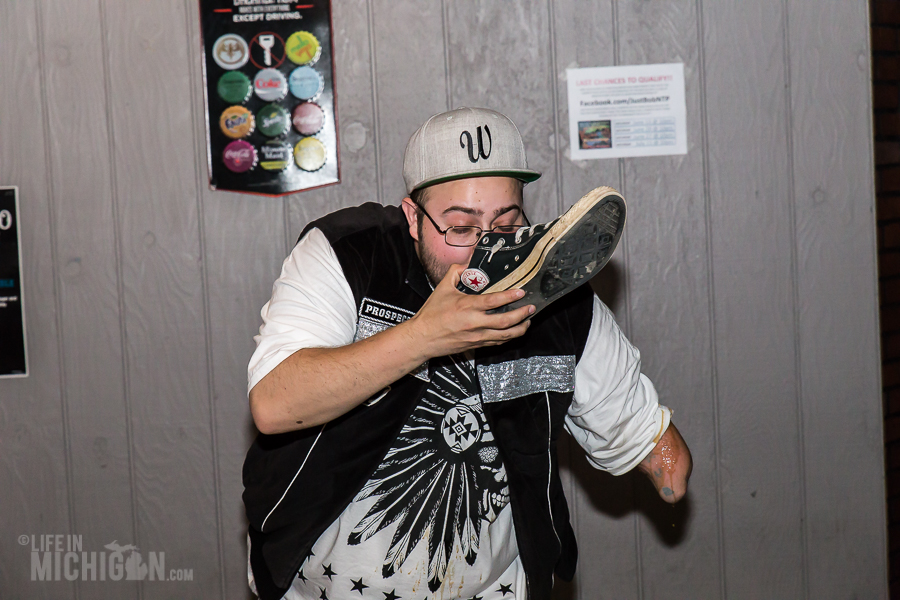 On Saturday, we witnessed a special ceremony to induct a new prospect into the club. Our friend, Cowboy Doug was officially admitted into the club. Congrats Doug! 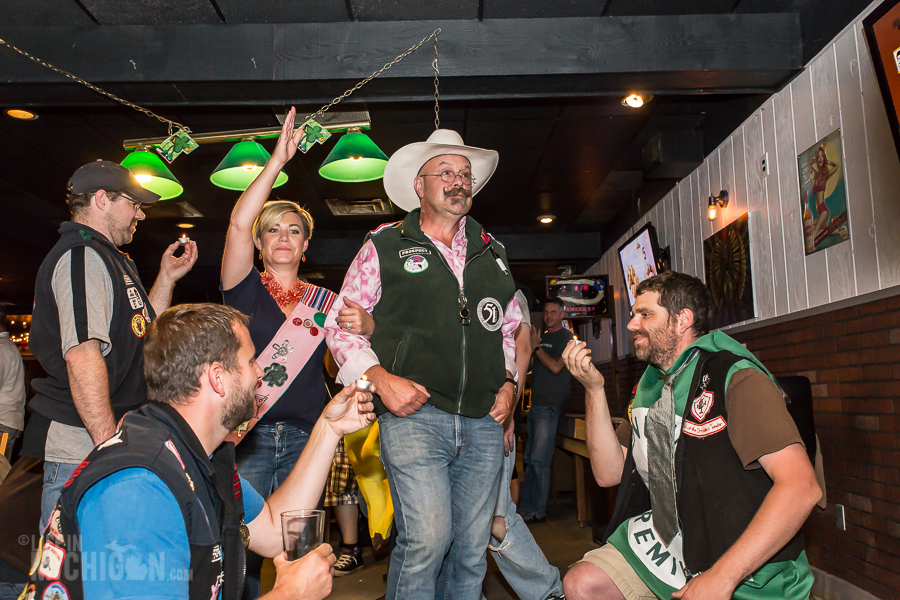 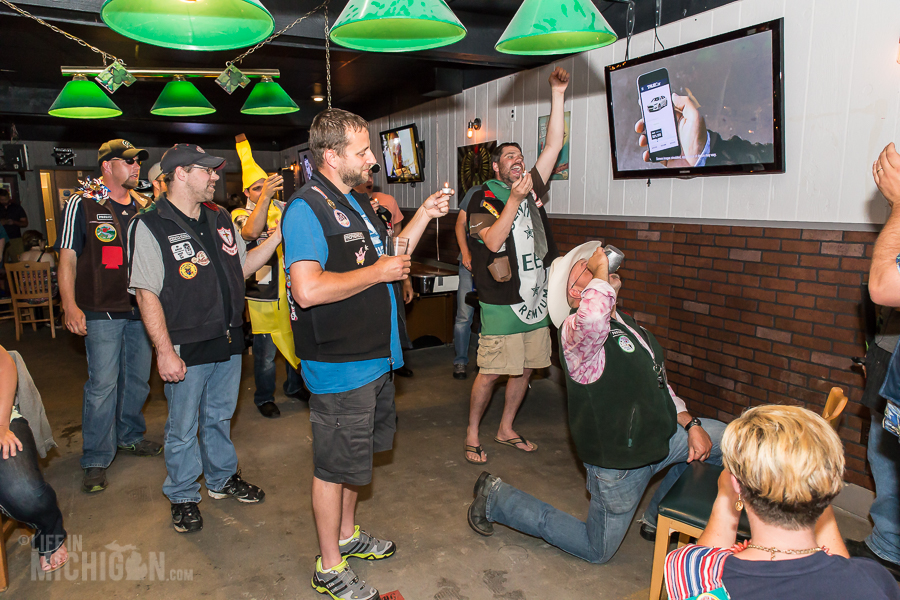 51 North Brewing, a Michigan craft brewery in Lake Orin was doing a tap take over. The ower, Don Gindhart, stopped by to check out the competition. The Tangerine Wheat was full of citrus goodness. This one would be great on the deck in the summer. 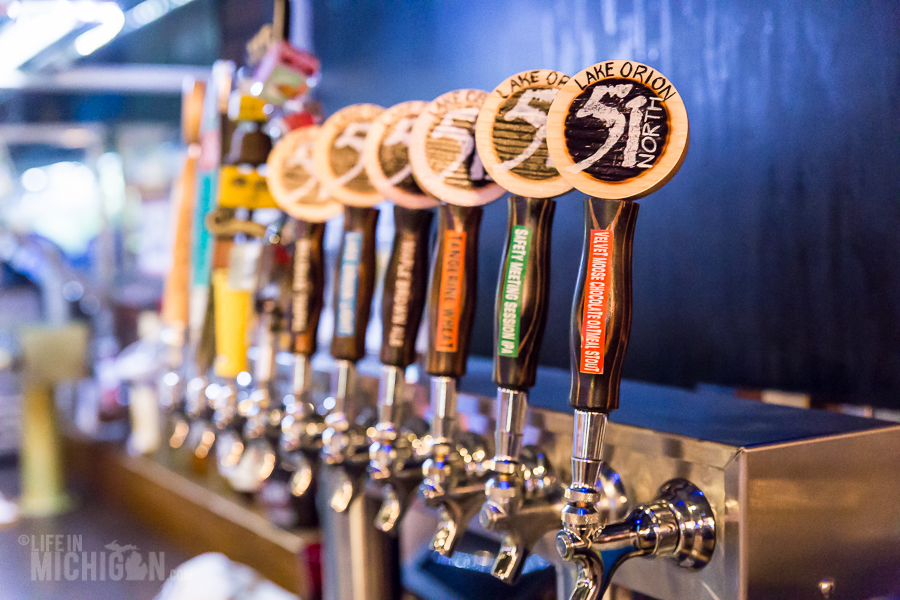 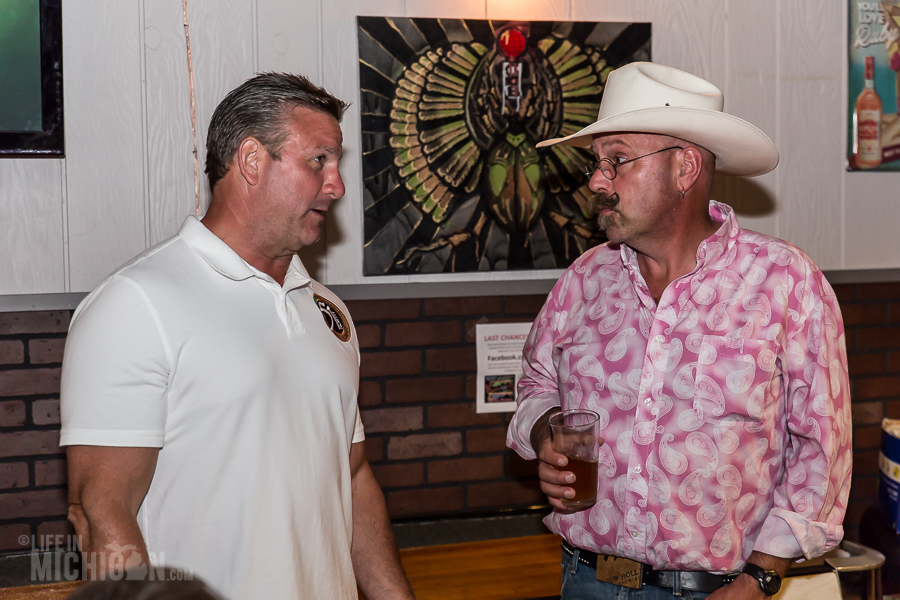 I was paired with Slayer. I need to toot my own horn just a little. I crushed Slayer, but Open Mouth Bass took me out in the sweet 16 round. 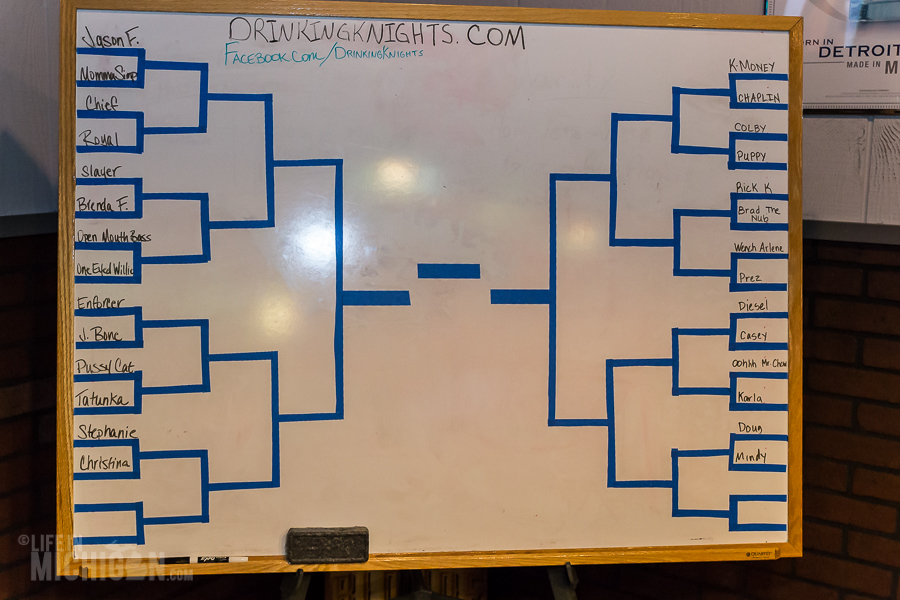 The competition was fierce. I didn’t stand a chance. 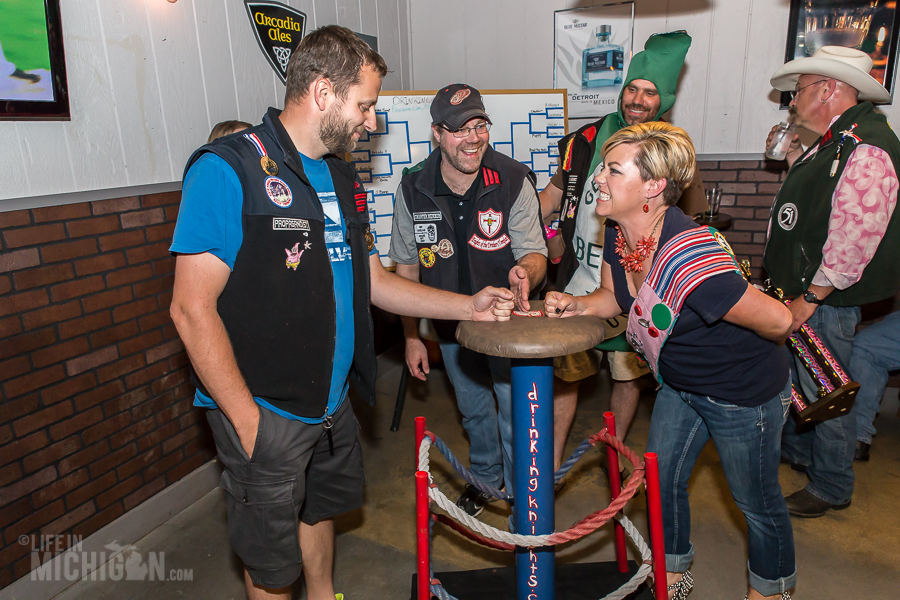 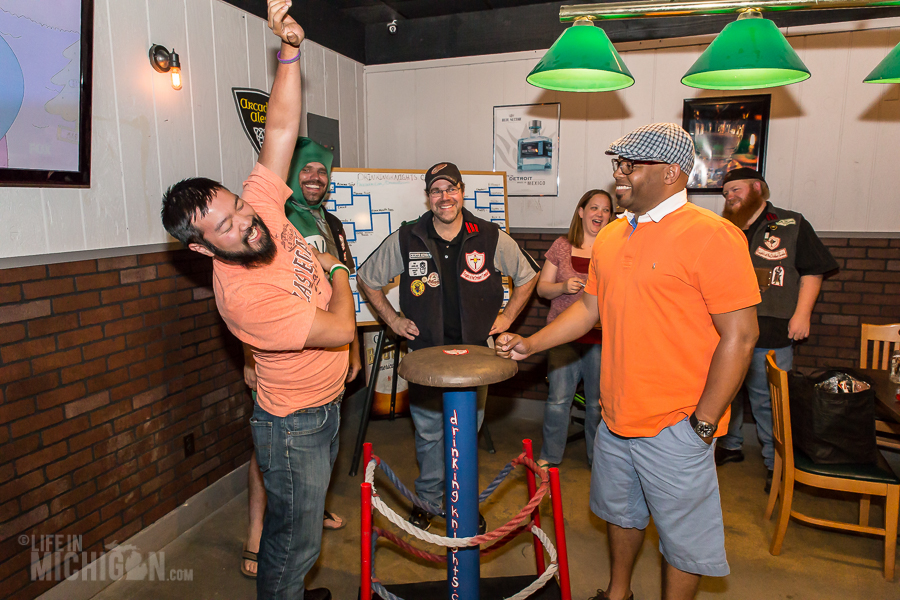 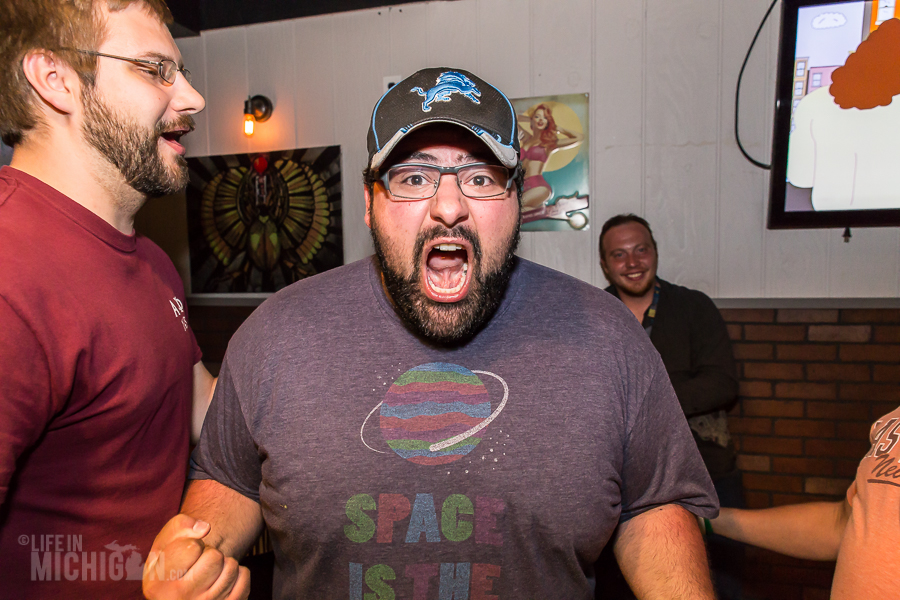 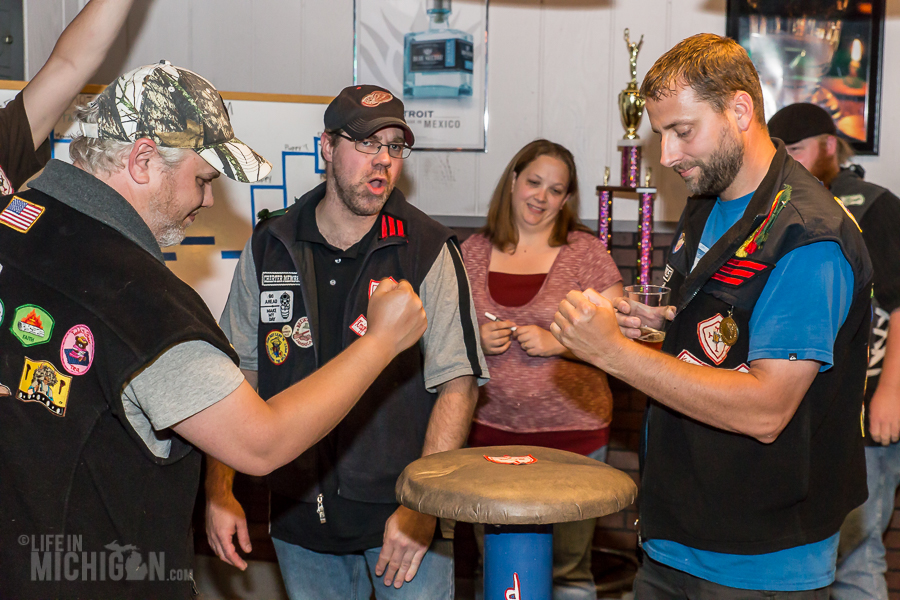 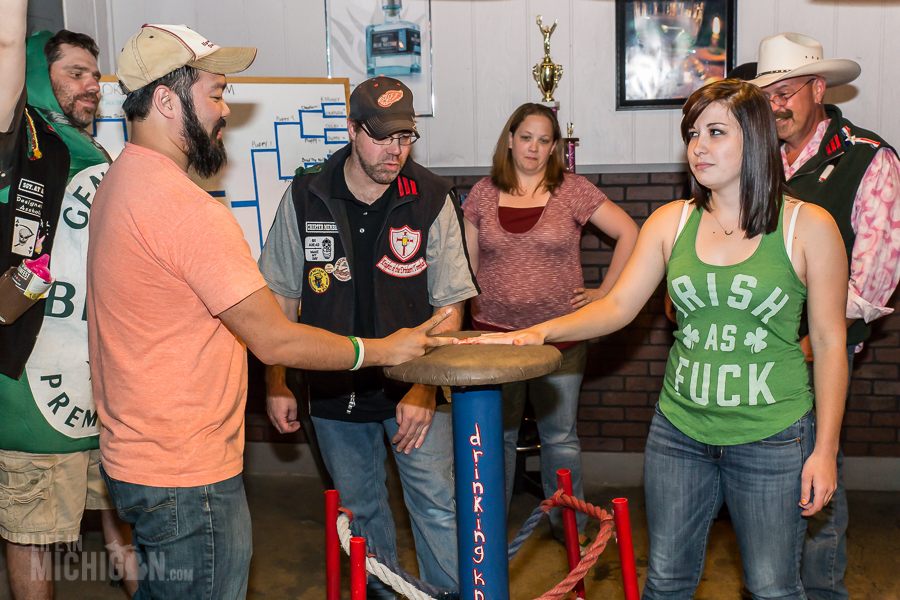 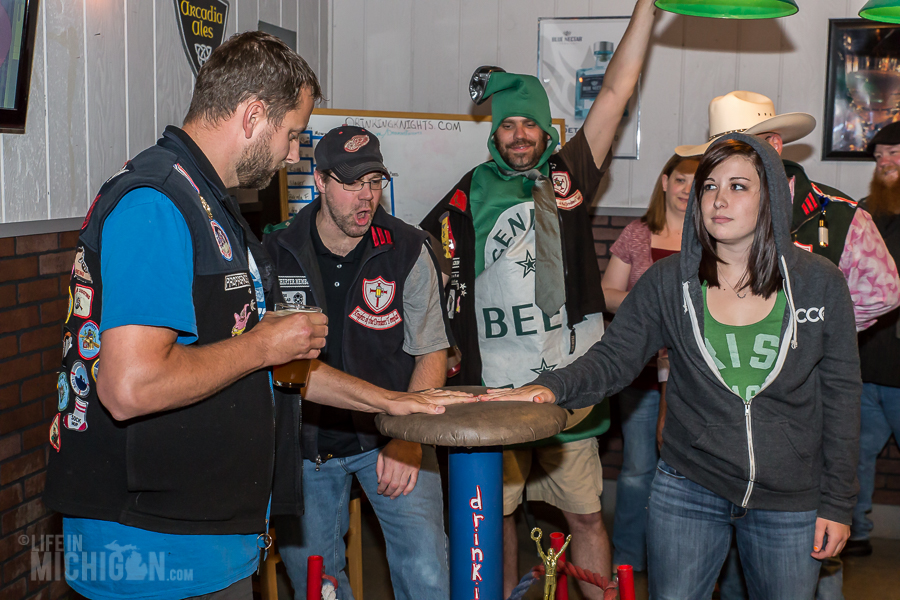 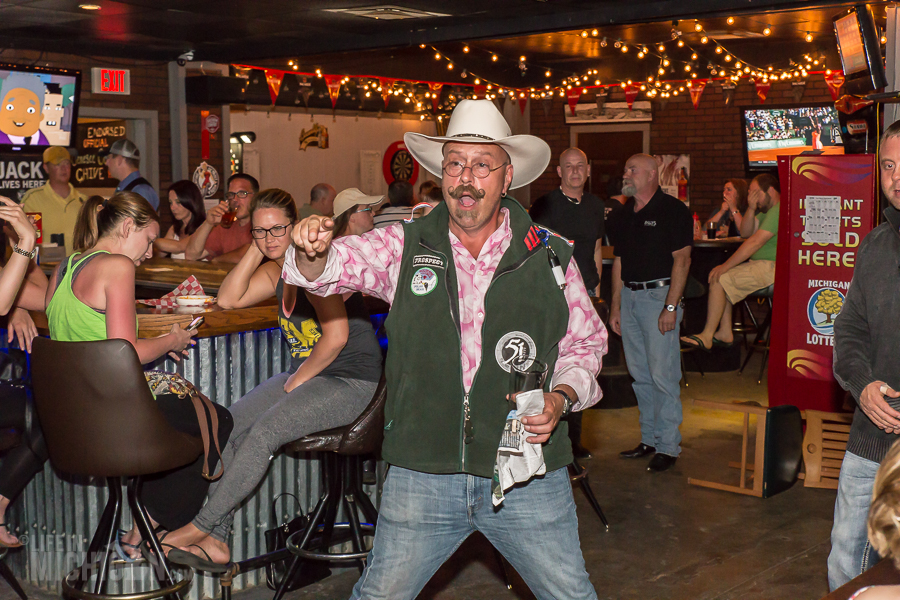 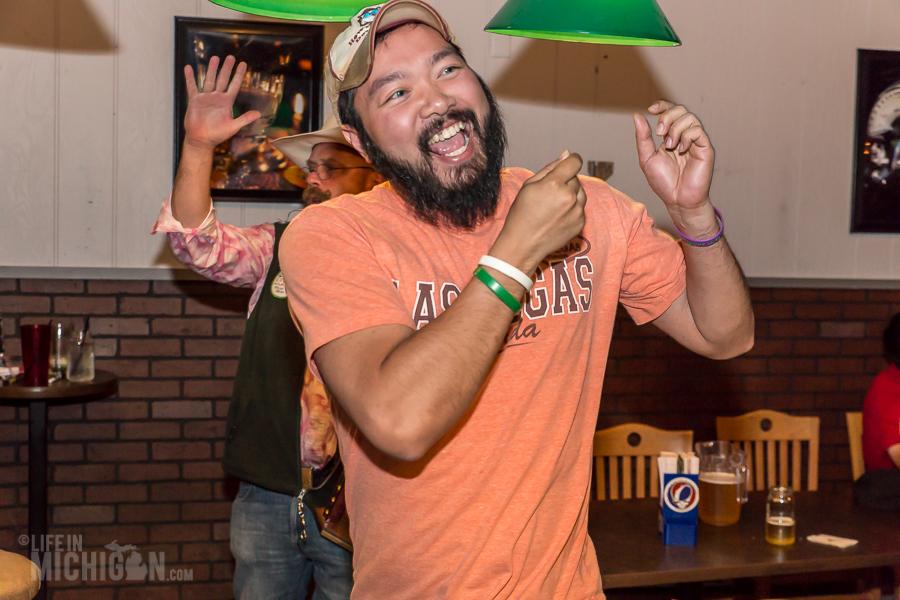 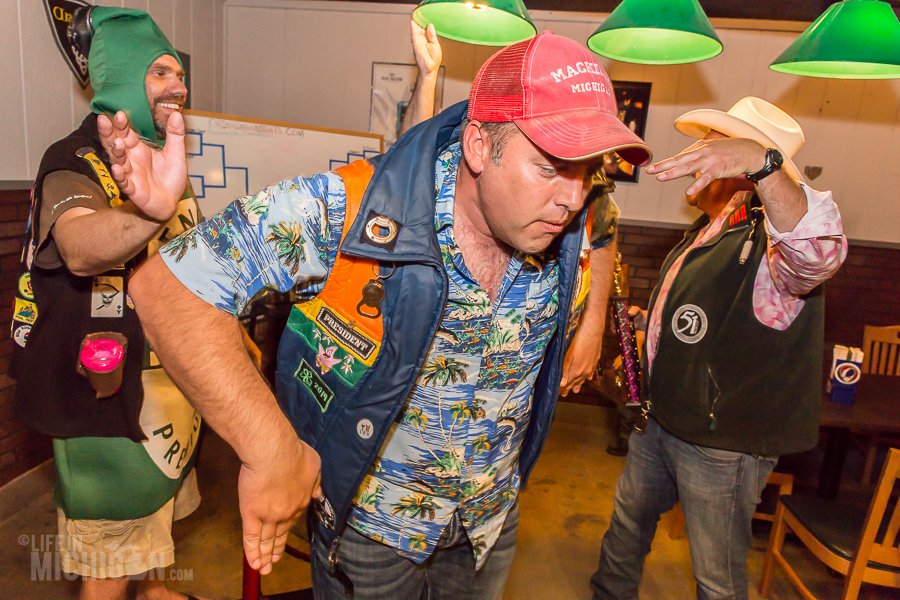 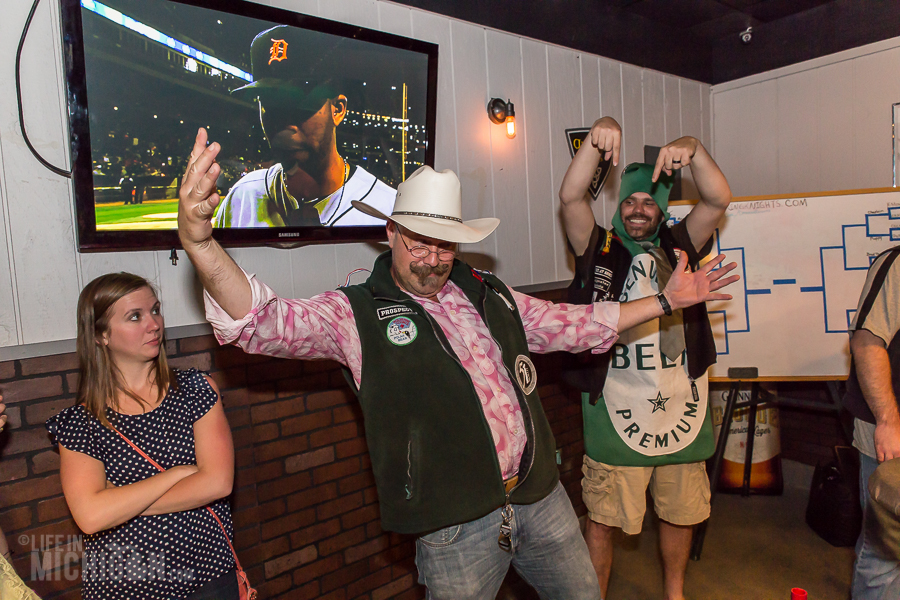 Intermission included a game that defies common sense. Participants tied pantyhose around their waist and pushed grapefruit abound the room. Doug said you had to be a good twerker to excel at this game. 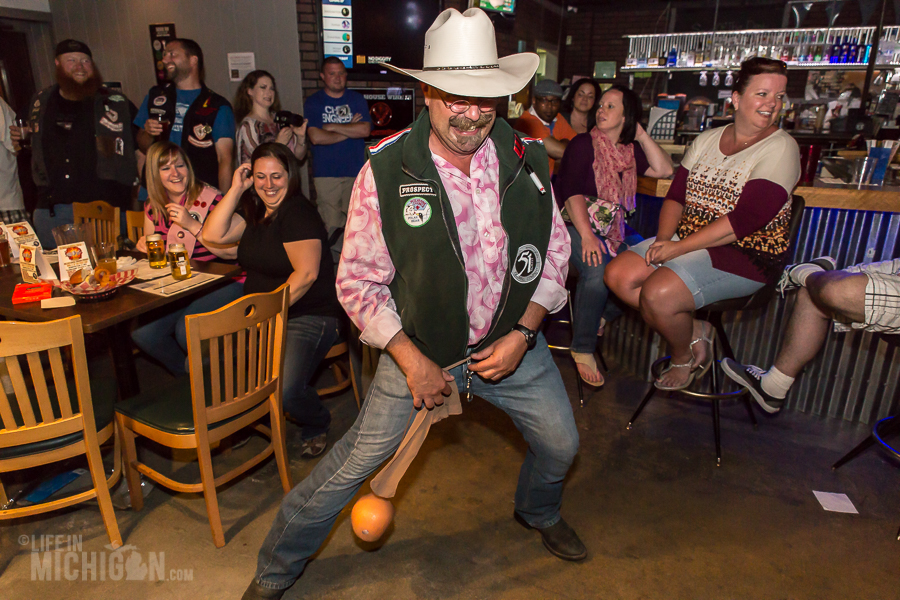 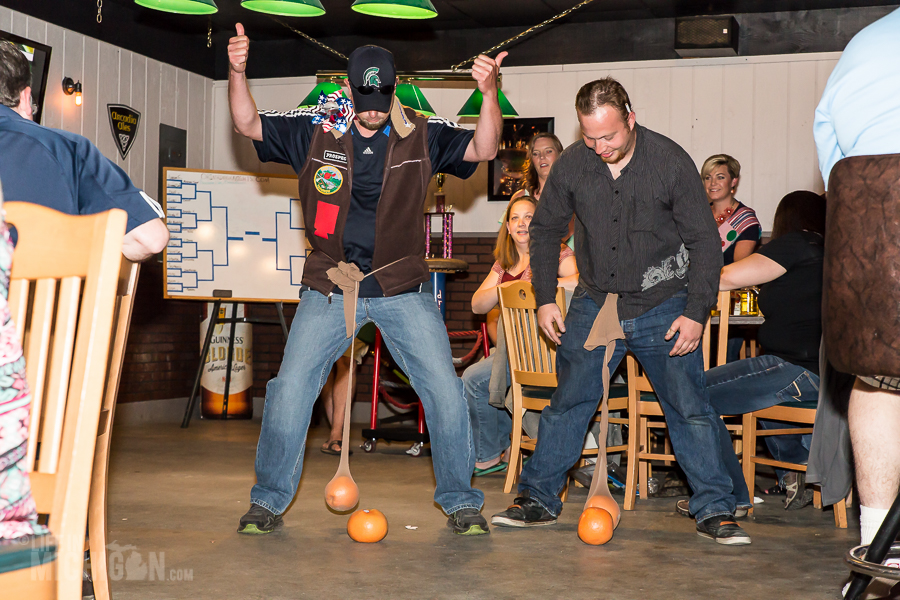 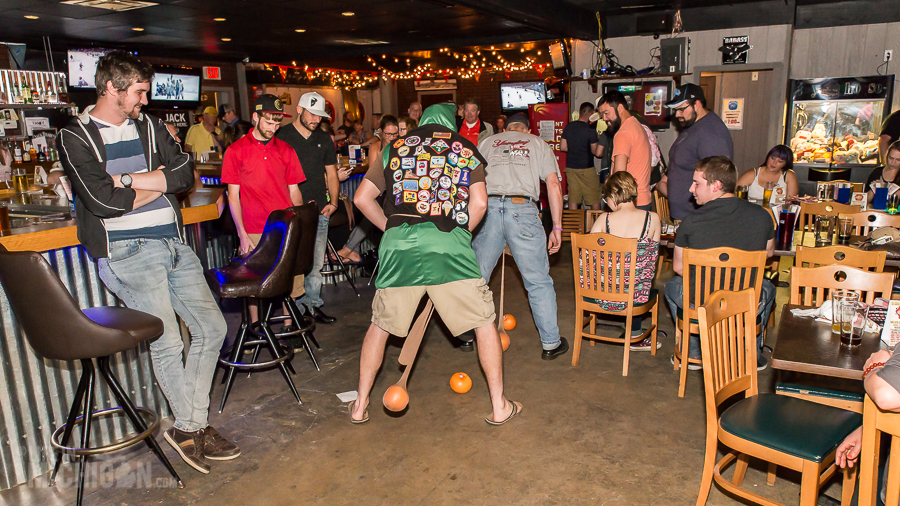 Final Round: Tatunka VS Puppy! 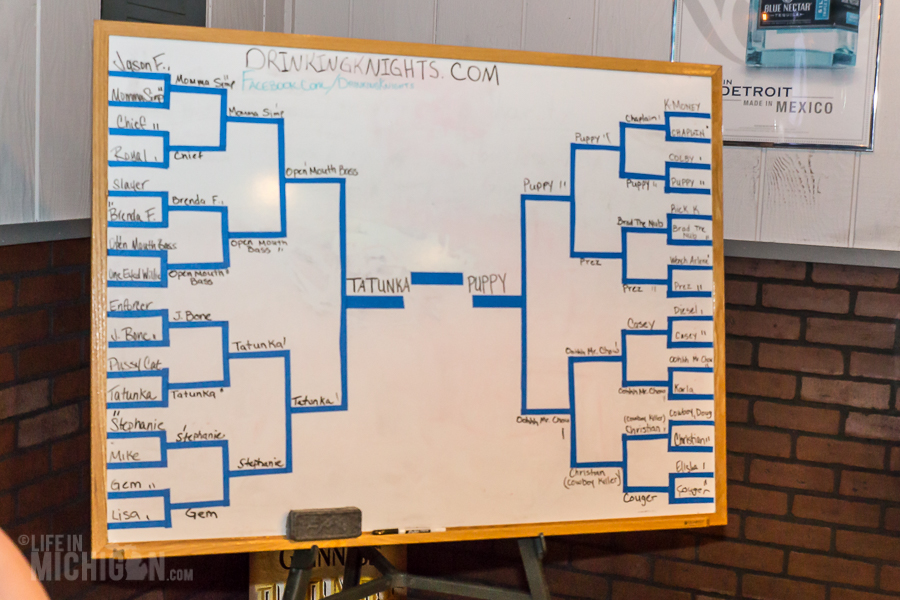 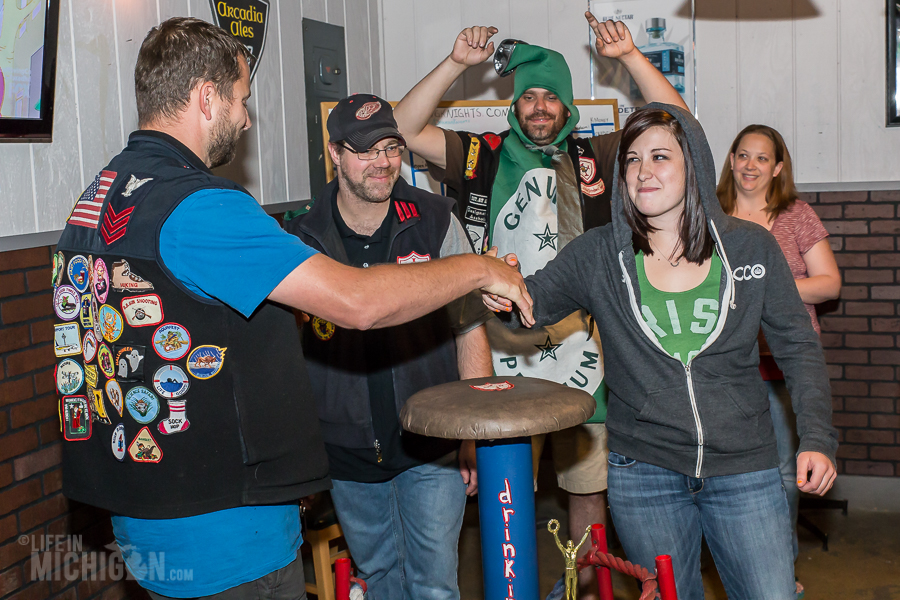 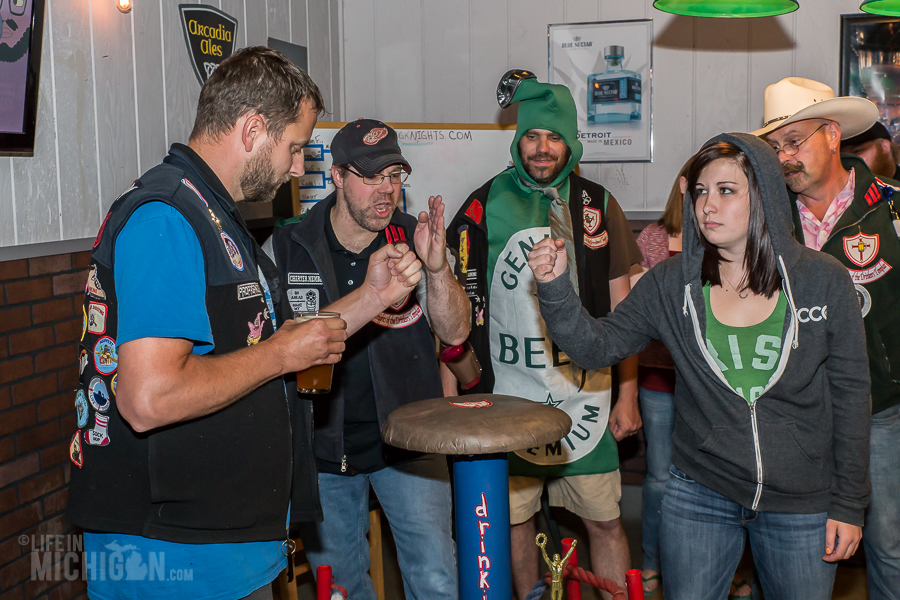 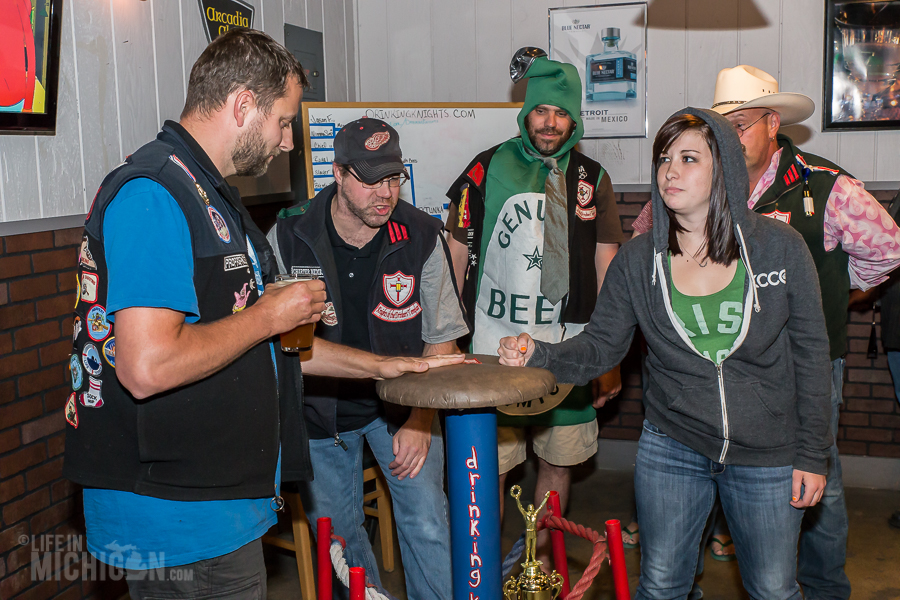 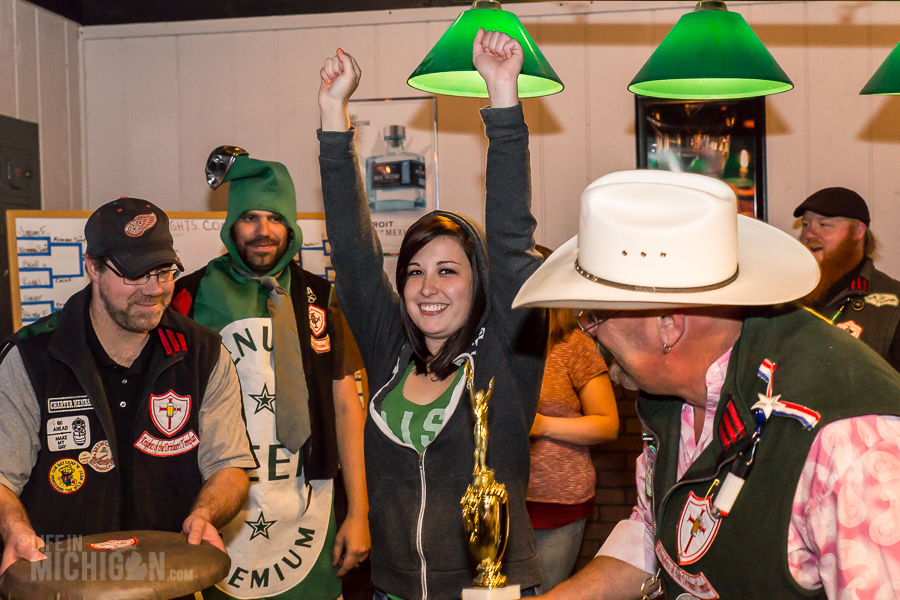 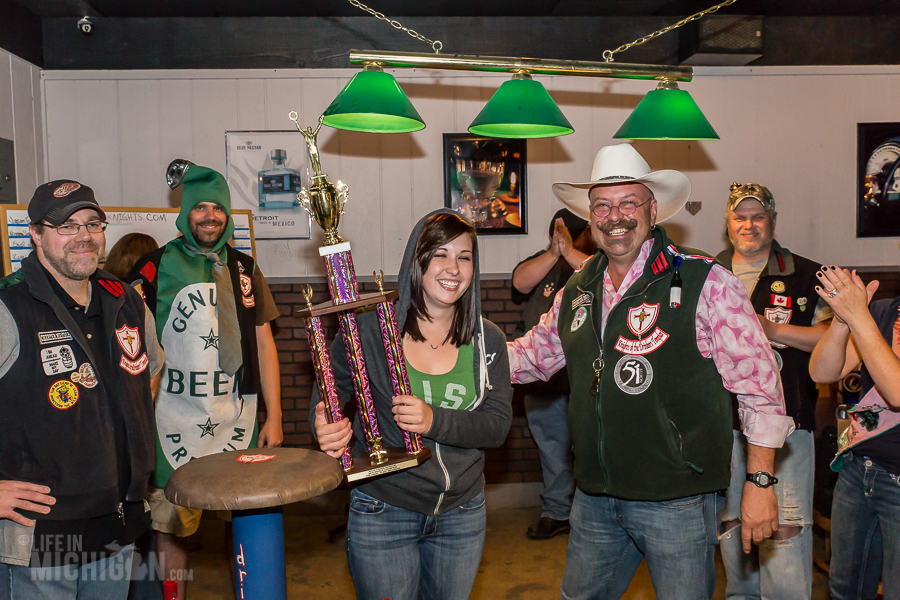 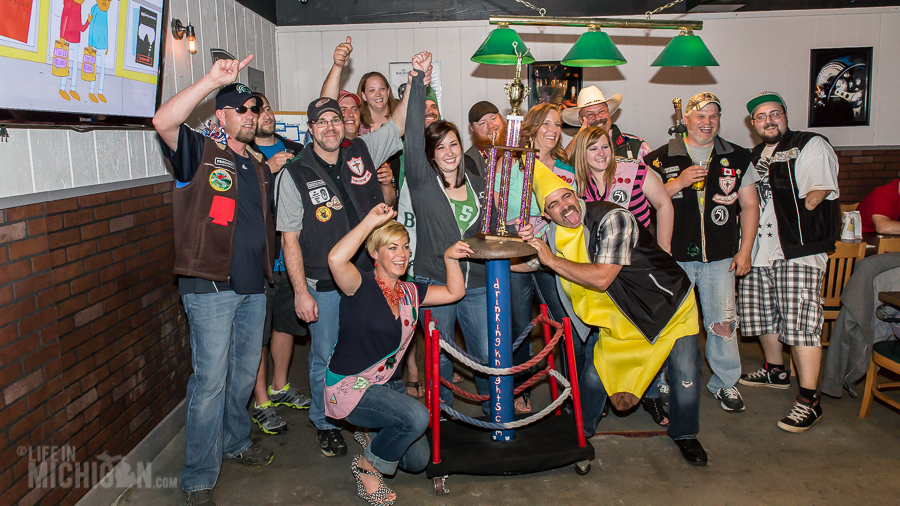 We had a great time and enjoyed the entire experience. We have hundreds of pictures in our gallery. Thank you Doug and J.P. O’Sullivian for inviting us, the Knights of the Drinking Templar for organizing and 51 North Brewing for the beer. It was a night I’m sure I won’t soon forget!

If you made it out to the Rock, Paper, Scissors Tournament, let us know what you thought by leaving a comment or sending us an email. We’d love to hear what you think.