Have you ever wondered how your grandparents met and subsequently fell in love? I often find myself pondering this question and wishing I could time-travel so I could ask them, along with a hundred other questions I can’t ask them now. The following is a work of creative non-fiction based upon the bread crumbs Ruth Lewick Sodt left behind in dusty photo albums, boxes stuffed with memorabilia, and her grandchildren’s memories. 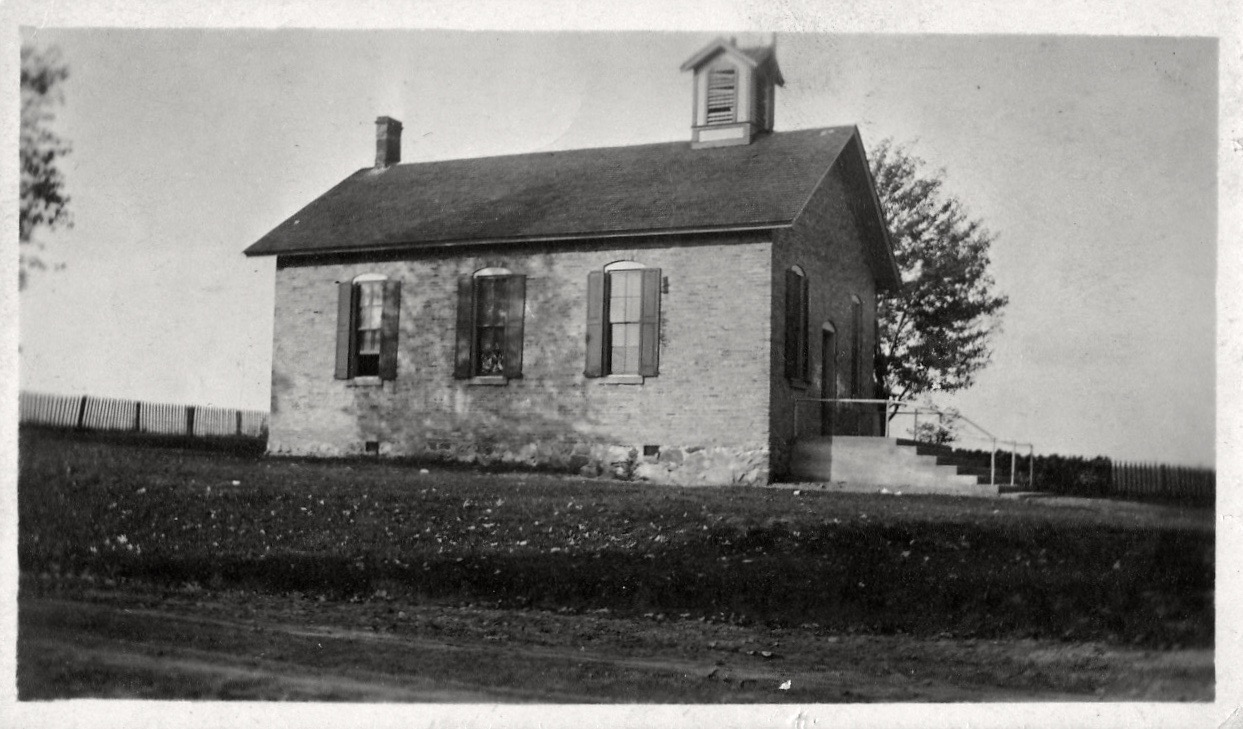 On a cold November morning in 1912, Ruth Lewick found her herself walking on a country road toward Craft School No. 7 in Sharon Township. The early morning sky glowed bright orange with pink and purple streaks creating long stretch marks of contrasting color across the horizon. The trees were silhouetted along the bottom edge of the landscape creating a frame. As the sun peeked above the trees and the orange glow is slowly extinguished, Ruth said to herself, “Red sky in the morning, sailors take warning, red sky at night, sailors delight,” and thought of her father who couldn’t let a red sky fade without comment. “I wonder if the sky is red at North Lake too,” she said wistfully.

The heavy skirts circled her legs like pesky barn cats, threatening to catch the heel of her boot. With a sigh of exasperation Ruth yanked a handful of her skirt up and held it firmly above her knees so it cleared the snow and her boots. Her lips pinched slightly as she made a mental note to ask mamma to shorten the skirt the next time she was home.

“Finally,” Ruth said when the tawny-yellow brick building appeared on the horizon. It was quickly followed with “No!” The gray concrete steps were buried beneath a snow drift. Tears threaten to spill from her blue eyes, but she firmly shut them to stop the flood. Another item on her list for the school director, “Who keeps the stoop clean?”

Before she could stop it, her last meeting with the school director tumbled into her conciseness uninvited. She’d felt like a child when the school director had scolded her for the broken chair. “It wasn’t my fault!” she said to the front of the school. “The chair was broken when I arrived!” After he left she’d thought of a hundred things she should have said to him but didn’t. With a shake of her head she firmly pushed the memory away, and with her right hand gathered a handful of skirt and stepped forward to deal with the snow drift.

“Finally,” Ruth said for the second time that morning and pushed the school door open, but before stepping across the threshold she kicked the snow off her boots and slipped her long fingers into the soft innards of her knit-stocking hat and pulled it off. Her breathing was labored and it created puffs of white mist in the air. Tucked in her shirt sleeve was her handkerchief, she pulled it from its hiding place and wiped her face and nose before giving her nose a sturdy blow.

Chapped lips curved to form a smile, “Schoolmistress” she said as she read the label above her peg in the coat room. Three icy fingers brushed the name neatly printed below it, “Ruth Lewick.” The smile lingered while she put her lunch pail on the top shelf above the peg. While adjusting the muslin cover of the pail and retying the string, she caught a whiff of a tangy, sour smell. In a flash the smile was gone.

It didn’t take long to locate its source, a forgotten lunch pail on the lower shelf in the boys coat room. “Johnnie!” she said, “How did you forget your lunch pail again?” She pulled it off the shelf and set it outside the door.

With the forgotten lunch dealt with, she turned her attention the pot bellied stove in the center of the school room. It was waiting for her. Sitting on its stubby legs and spouting an elongated flu that dribbling smoke and ash into the room like an incontinent old woman. Ruth placed her hands on her hips and like a solider checking her weapons before a battle, she adjusted the sash around her waist before straightening the tie around her neck.

Carefully, so she wouldn’t disturb the beast, she laid her books and papers on the corner of her desk. Her boots tapped out a staccato on the hardwood floor as she advanced on it. The stove’s gritty exterior was cool to the touch, but the perpetual acrid stench of smoke still hung in the air. Silently wishing for one of the Trolz or Wahr boys to appear so they could deal with the dirty, old beast, she bent over the wooden box and grabbed a few pieces of dry wood and kindling.

When the battle of the potbellied stove was over and a fire was dancing in its belly, she straightened to her full height and let her hands drift towards her hair. With practiced movements Ruth felt for the bun she’d carefully secured before she left her rented room. It was still in place, but a few tendrils had slipped. She pushed these into place before she allowed herself to look out the window; the children were arriving in the school yard. The girls were organizing the younger children for a quick game of Fox and Geese in the deep snow. You could see the circle in the snow. She knew it wouldn’t take long to finish creating the wagon wheel shape. Memories of playing this same game of tag with her sisters just a few years ago returned the smile to her face.

The packet of letters and pictures in the desk drawer was calling her name. The words and images in the drawer created a warm glow deep in her belly. Despite the chill in the air, her skin flushed red hot from just below the neckline of her blouse to her hairline. With a long finger, she pushed her “specs” into place and walked towards the door to ring the bell for school.

On that November morning in 1912, Ruth would have been just 19 years old. Not that much older than many of her students. She would have been settling into her first teaching contract. 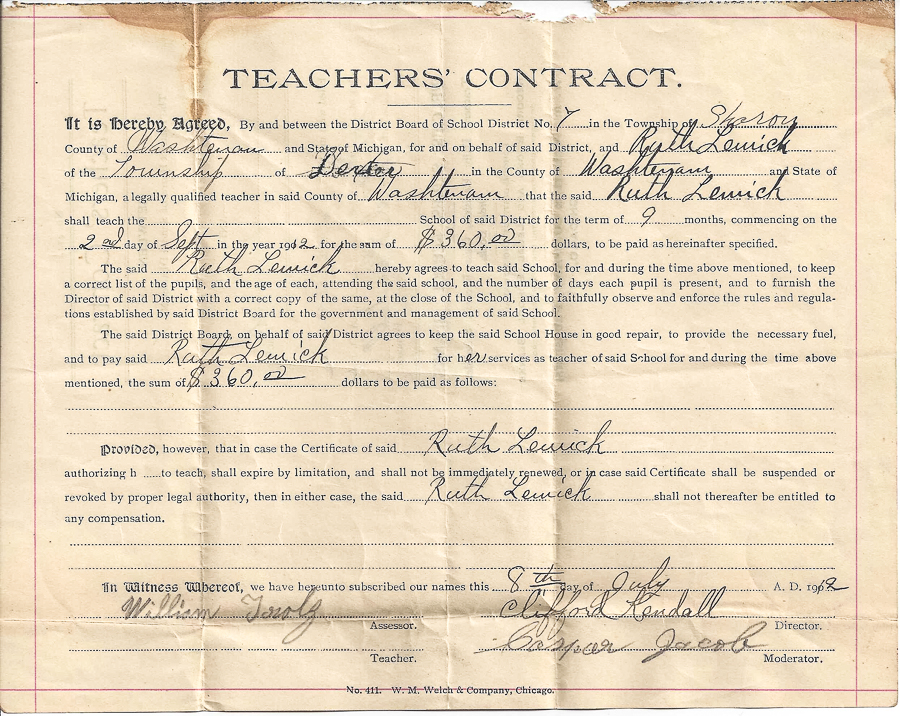 Craft School was located at 15985 Below & Jacob Roads in Grass Lake, Michigan. 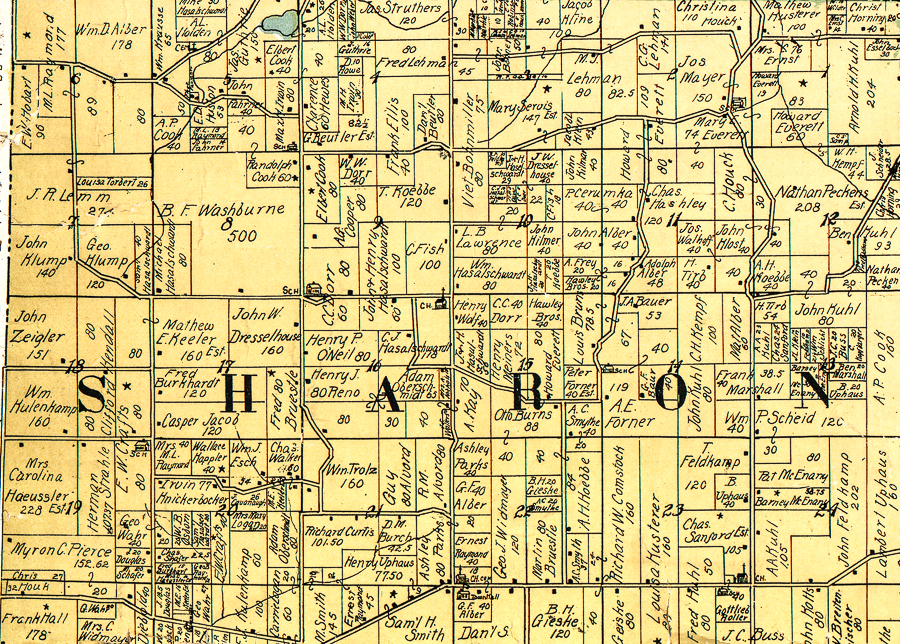 (Chadwick’s 1911 Map And Directory of Washtenaw County, Michigan, courtesy of the Clark Library Map Collection, University of Michigan.) Craft school is located below and to the right of the “S” in Sharon.

We also know the names of the students and many you’ll recognize. 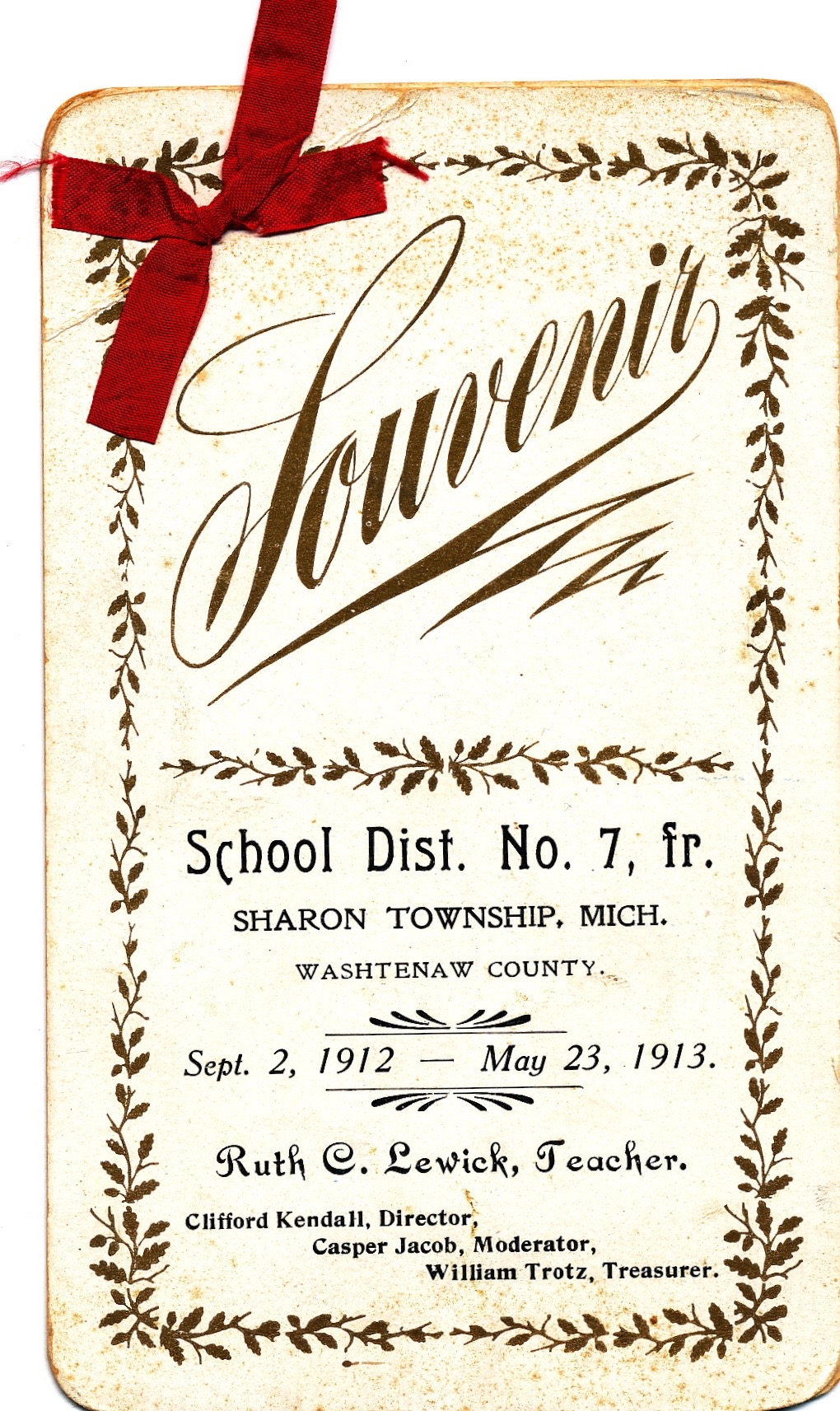 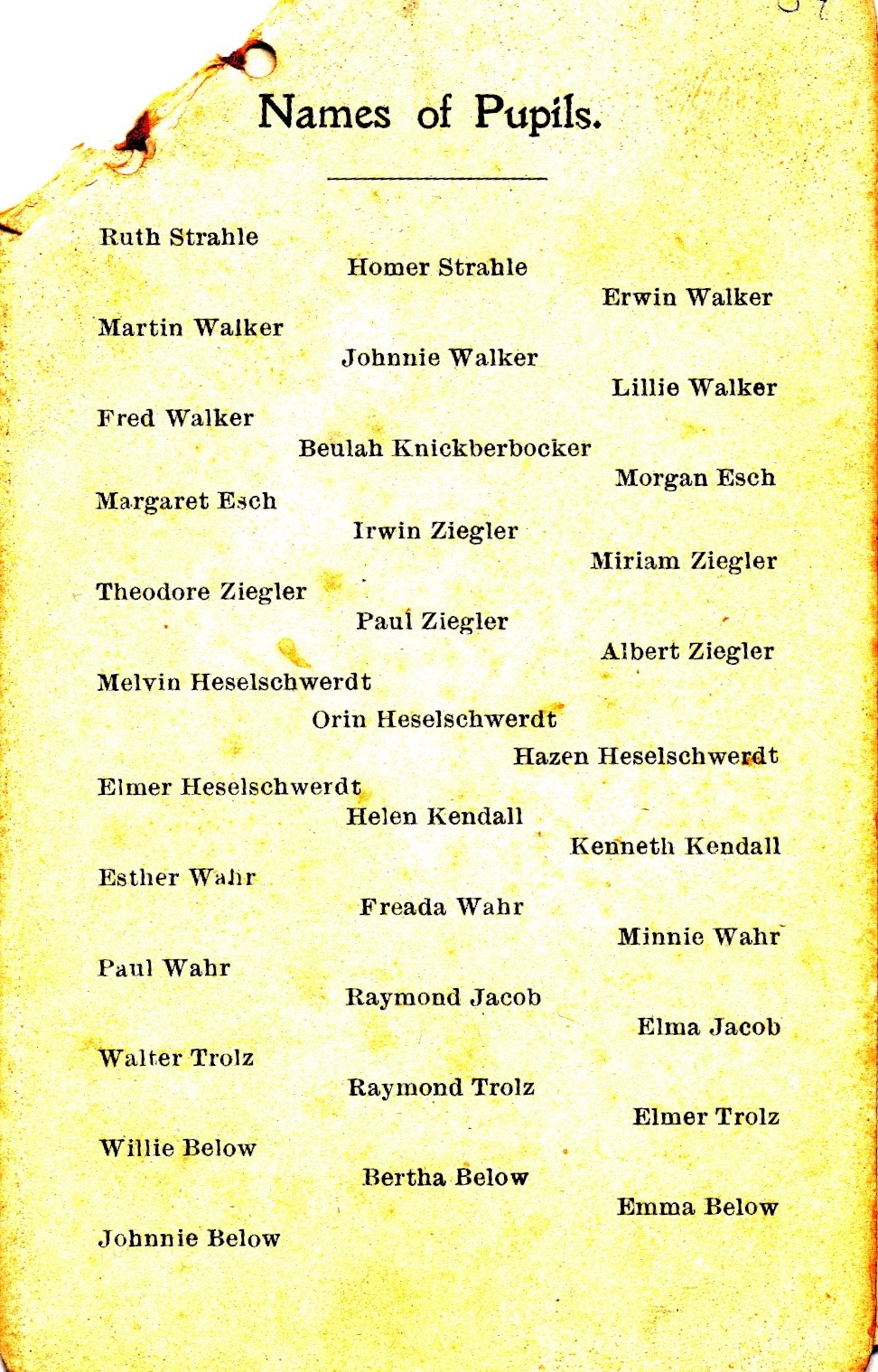 She lived in Grass Lake but we don’t know where or with whom. I’m assuming it was within walking distance of the school. 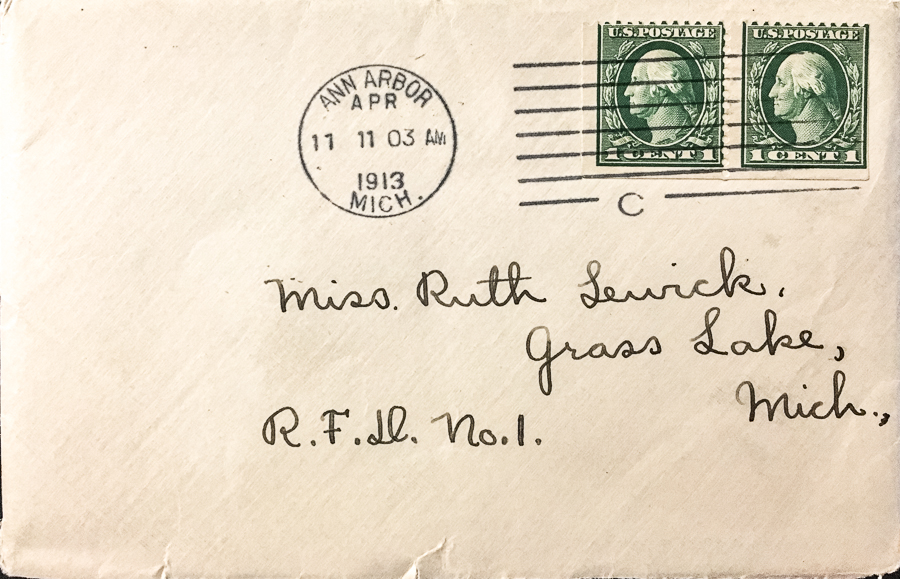 I picked on Johnnie Below for my story because of the picture of Ruth giving him a spanking. (I so wish I had a better copy.) 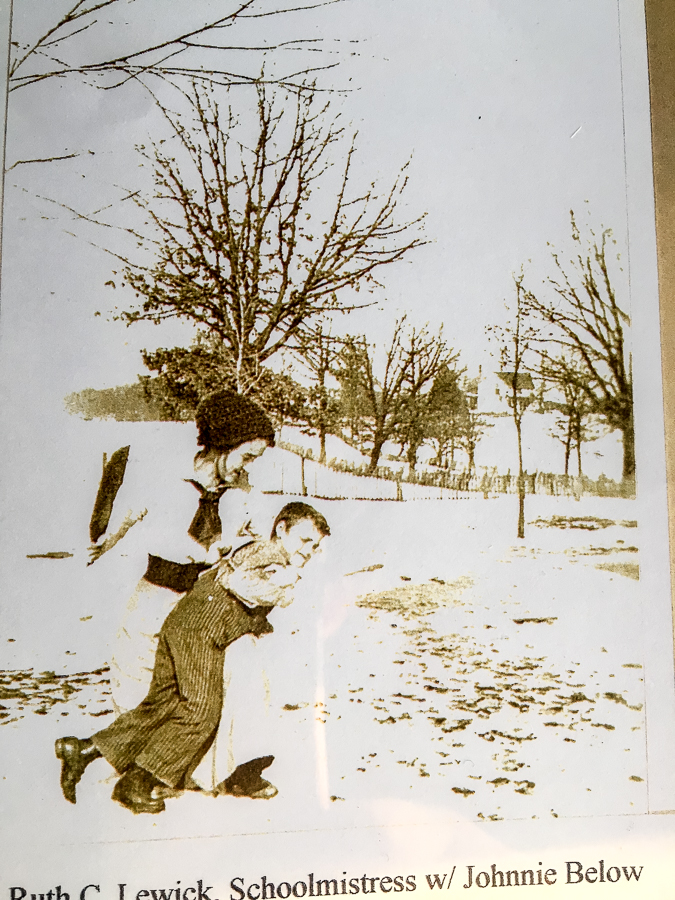 Based upon the many references in newspapers and her in correspondence, she often traveled solo to Detroit, Jackson, Ypsilanti and Grass Lake. The cards her friends sent, usually included a reference “to the fun she was having.” She was the oldest of four and had three sisters, so perhaps it was the birth order that infused her independence or maybe it was her parents. Her grandmother and her mother were both accomplished seamstresses and her father worked as a carpenter on the railroad before becoming a farmer.

I believe my grandparent’s story should be shared. If you have details, pictures or documents, please email me or share a comment below.

We love social media so we are on Pinterest, Tumblr and Instagram. Leave a comment and let us know what you thought of the Ruth’s story. Cheers!