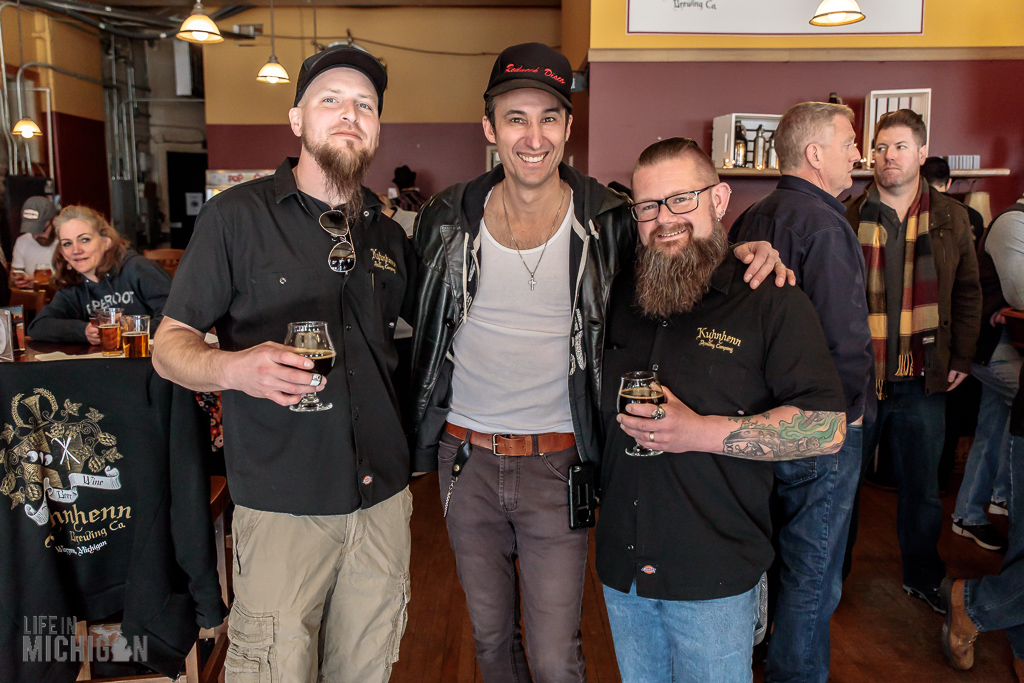 Somehow, in all the excitement at the Winter Beer Fest, we missed the collaboration beer between Kuhnhenn Brewing and Detroit’s hardest working rock band; Sponge. This chai spiced stout is called Flesh and Bone. Thankfully the stars aligned as Sponge visited Kuhnhenn’s on March 4th to drink beer and play music. 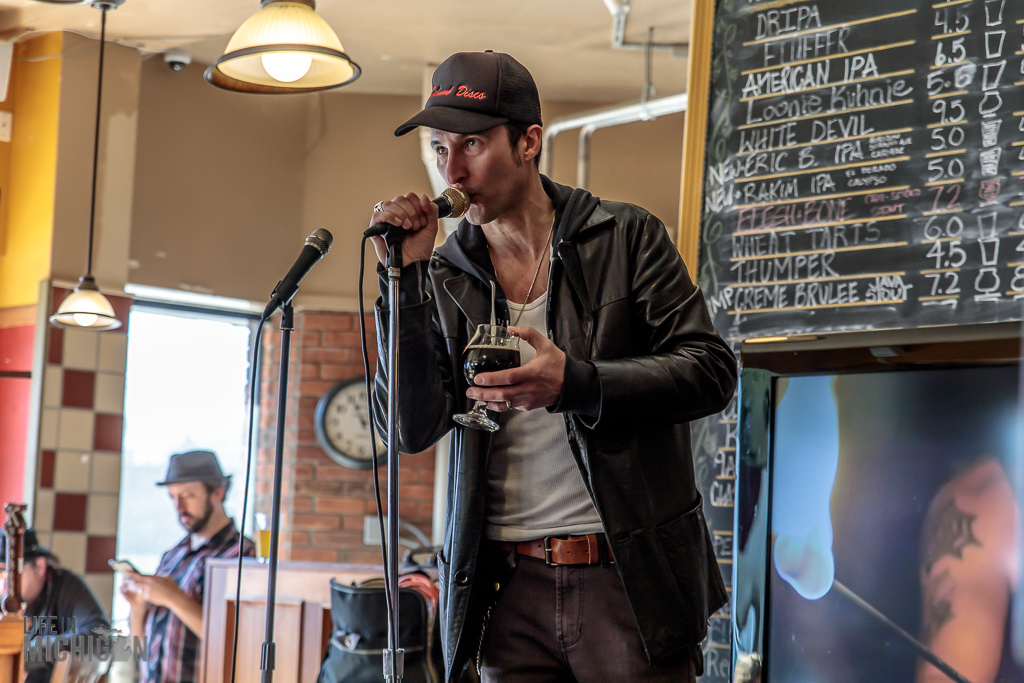 Sponge recorded their eighth studio album called The Beer Sessions last year at The Loft in Saline. While recording the new album, the band invited some of their favorite Michigan brewers to chat about beer and music. Each episode of these beer sessions was filmed to give fans an inside look at the recording process and share the art of Michigan craft beer. 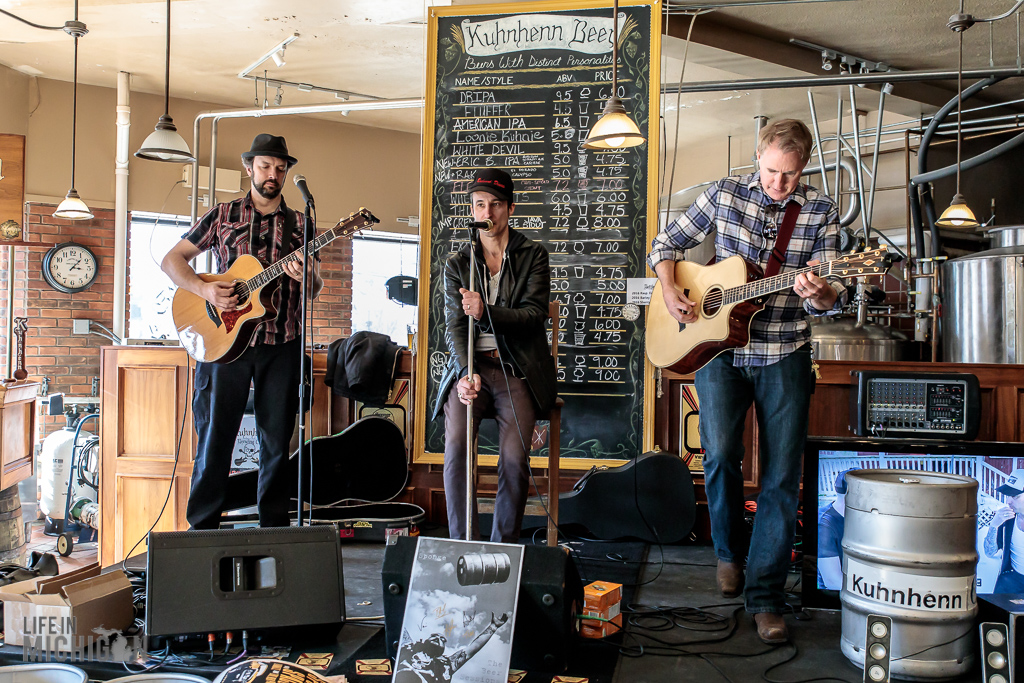 I have heard of breweries crafting beers inspired by bands they dig. Sponge has given this concept a new twist by collaborating with the brewers that inspire them. This synergy in the craft of making music and beer creates a new dimension to enjoy both art forms.

When we arrived at Kuhnhenn for the Beer Sessions live, we scanned the twenty beers on tap. We started off with a DRIPA and the Sponge collaboration brew; Flesh and Bone. As many of you know, DRIPA is one of the best double IPAs in the state. Flesh and Bone is a hearty stout with a heavy dose of chai spices. It works well with this rich stout and made for a very intriguing beer. I wondered if it reflected a musical direction of spicy darkness with full body. 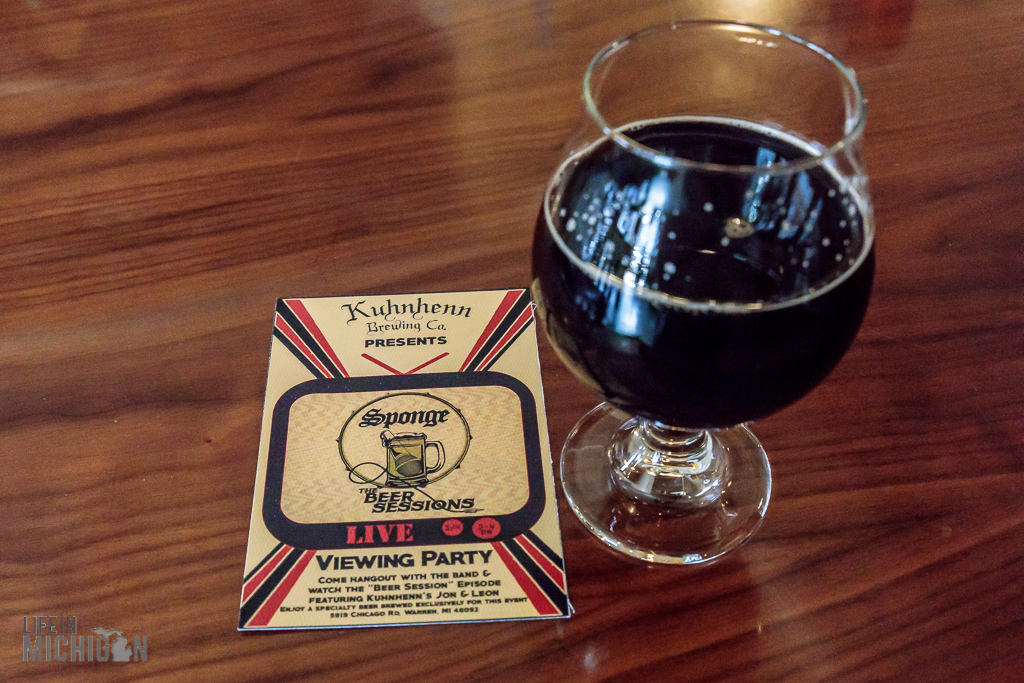 A TV monitor was set on the stage playing the Sponge Beer Sessions segment that featured Jon Piepenbrok and Leon Traczynski from Kuhnhenn. It was a little tough to hear, but looked interesting. I am looking forward to the band releasing all the segments with the breweries. 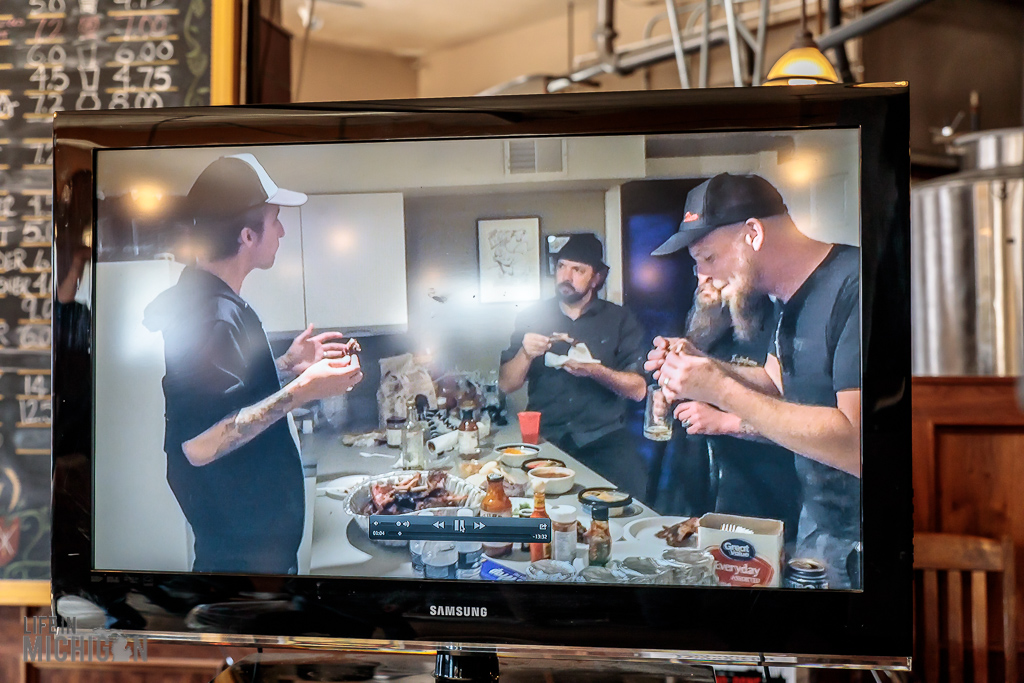 Vinnie Dombroski (vocals) introduced the lovely Elyssa Ciaramitaro who worked with the band during the filming of the Beer Sessions. She was autographing photos from the Beer Sessions and chatting with the growing crowd at the taproom. 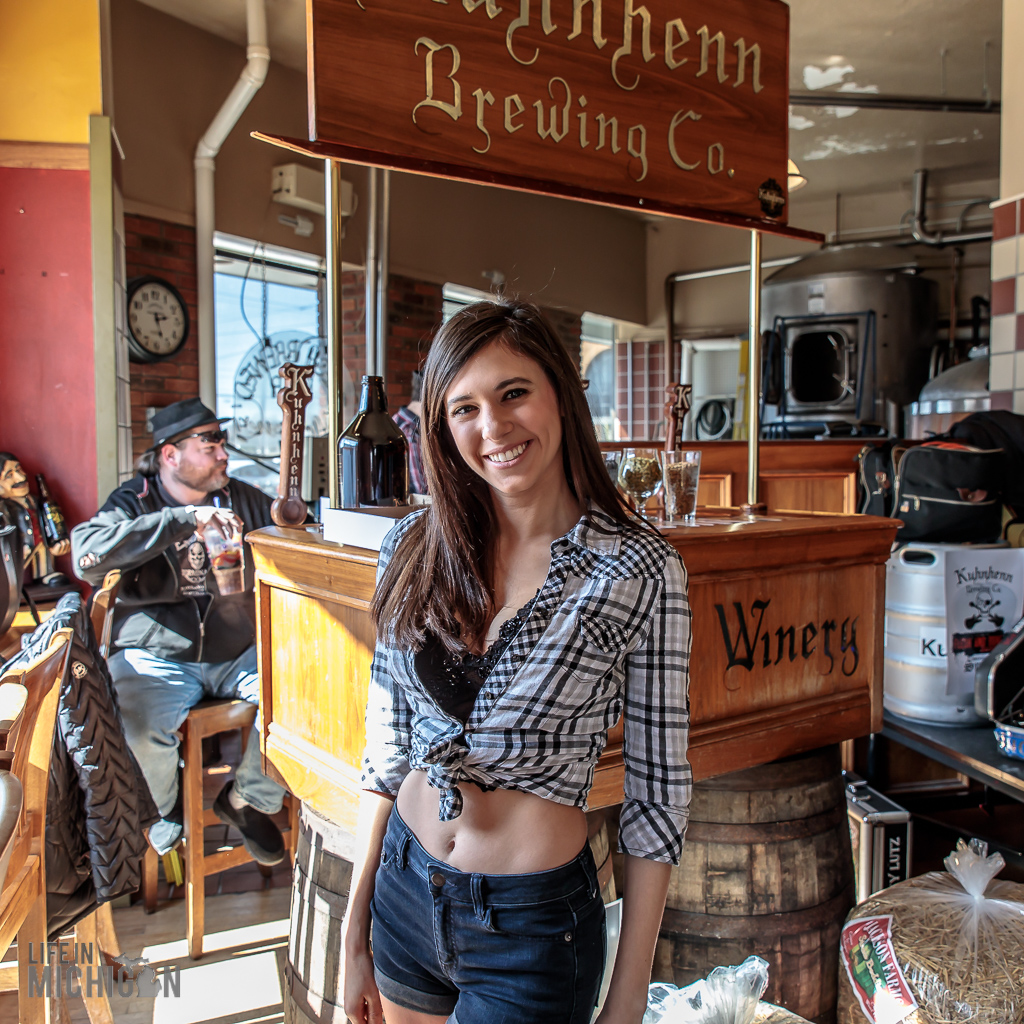 Just about every chair was taken and more people standing around the bar when Vinnie asked if we wanted to hear some music. A big cheer arose as Vinnie, along with guitarists Kyle Neely and Andy Patalan launched into an acoustic set of Sponge tunes. 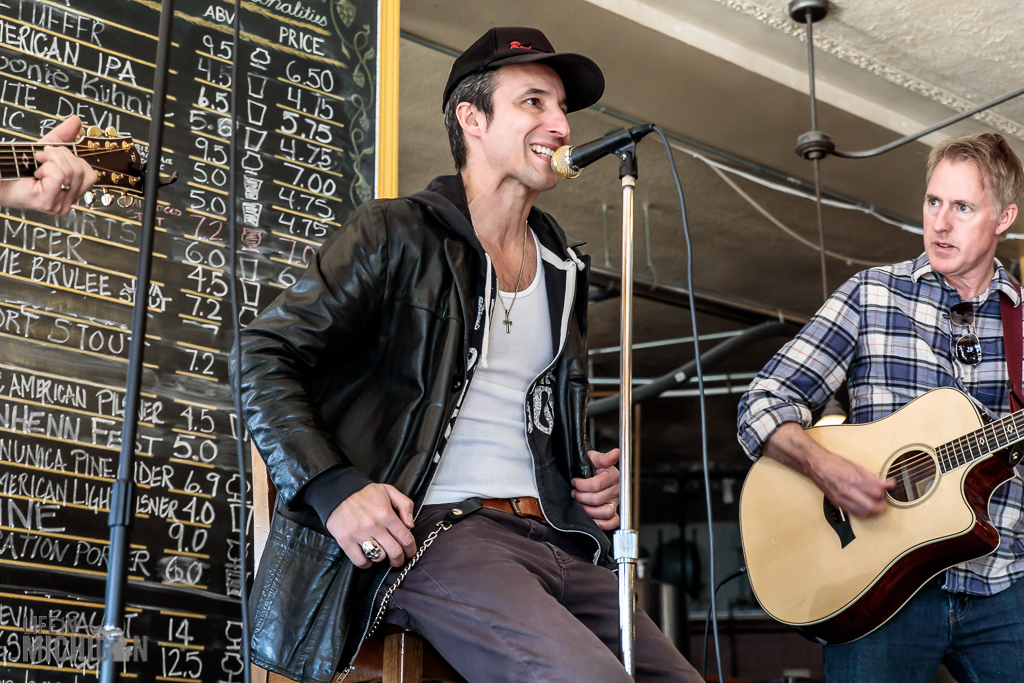 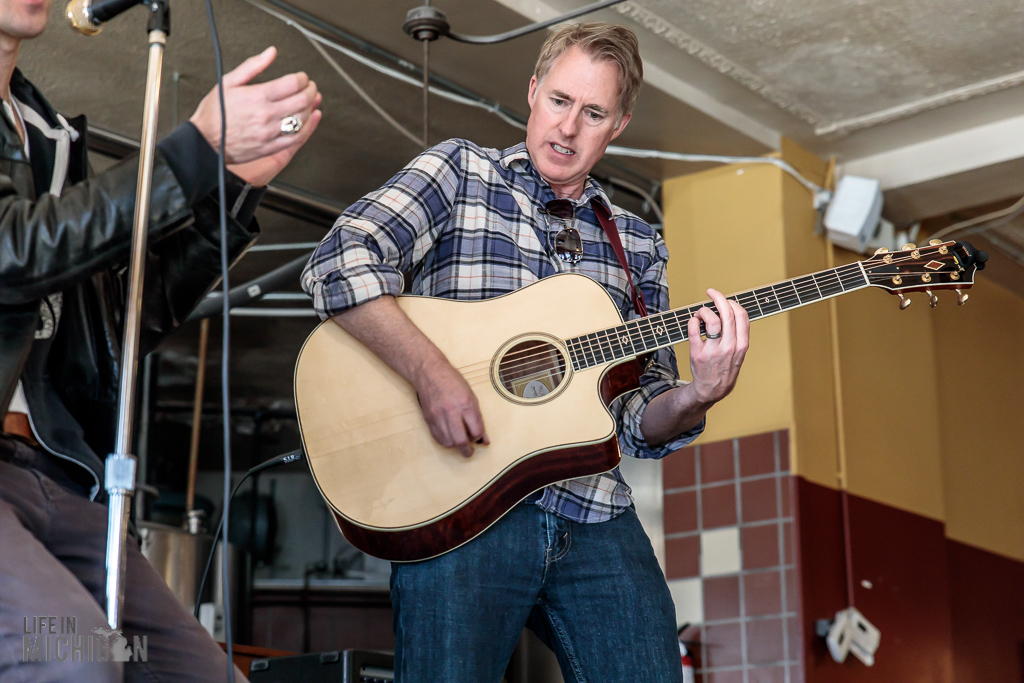 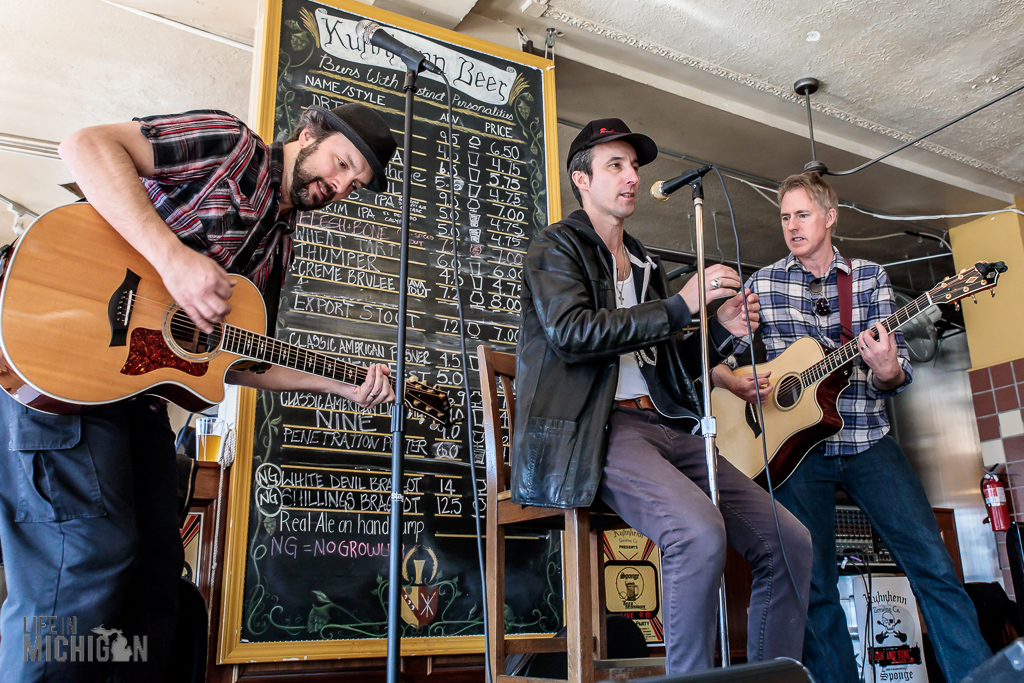 Known for hard rocking electric shows, the guys from Sponge packed their acoustic set with a solid punch and plenty of small room intimacy. They played hits such as “Plowed”, “Molly”, and “Have You Seen Mary” which sounded fantastic unplugged. The band also got into ‘The Beer Sessions’ release with “Jump While The House Is On Fire” and “The Whores Are Closing In”. 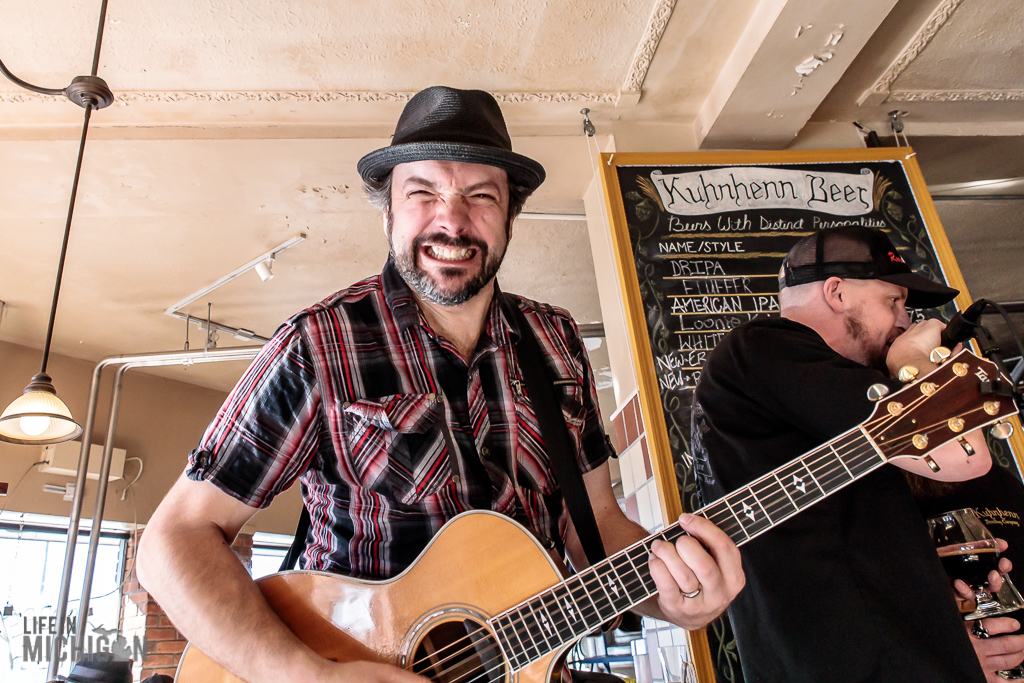 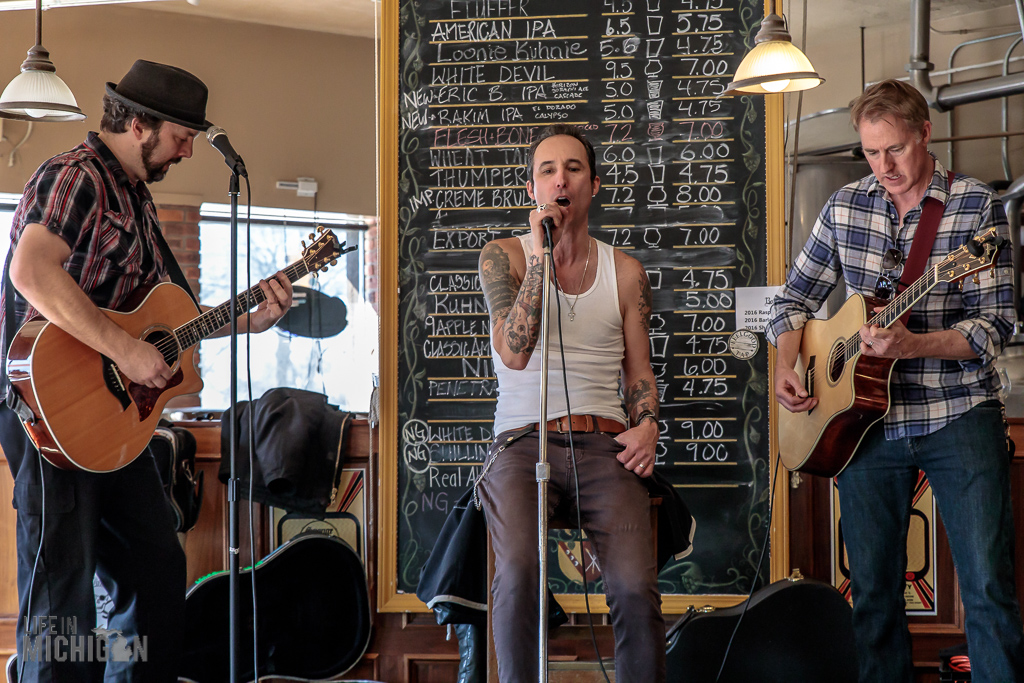 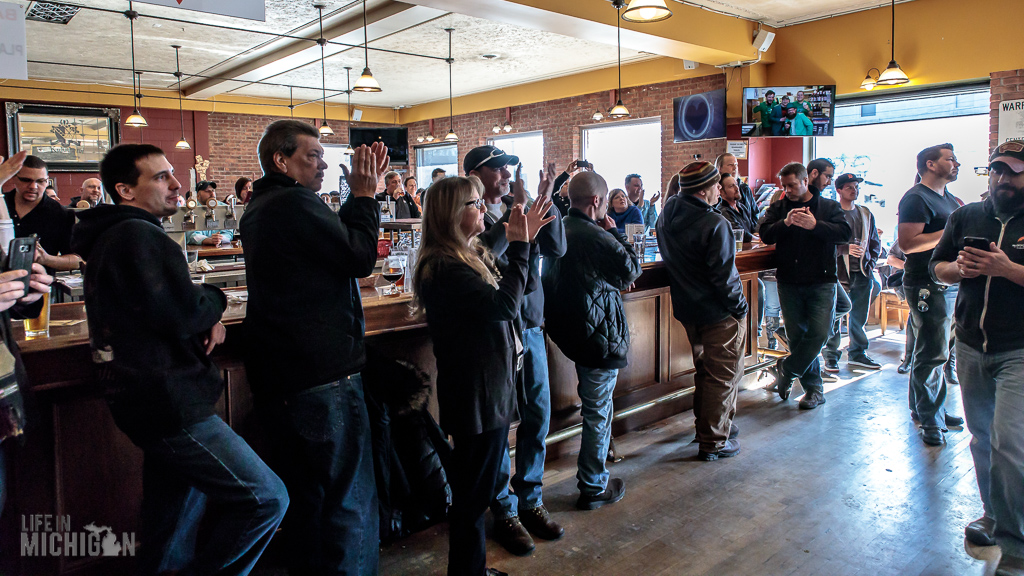 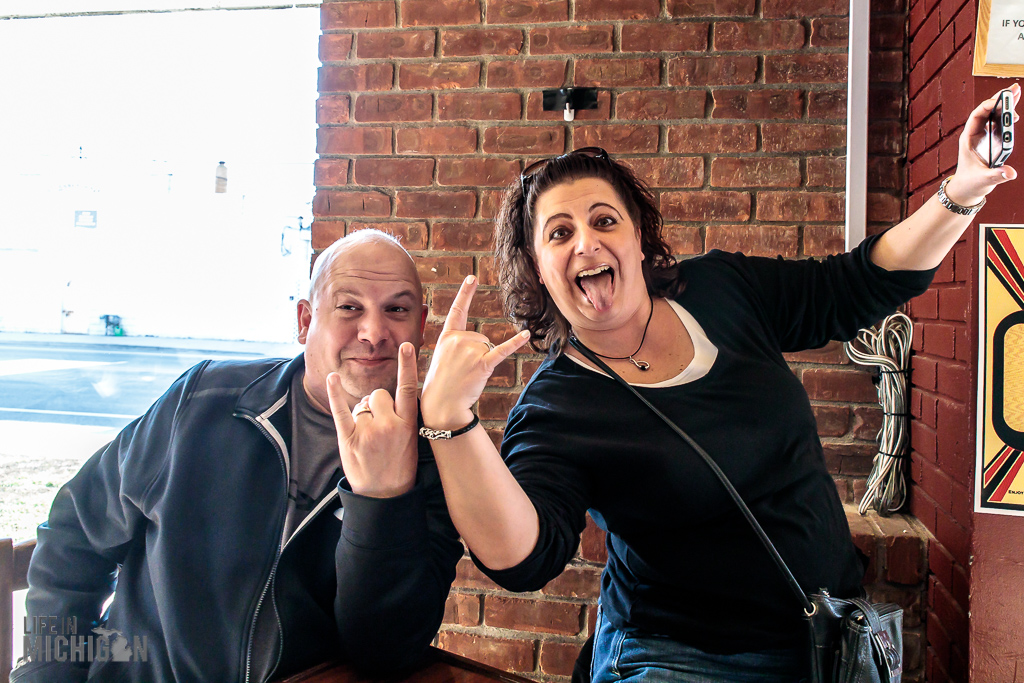 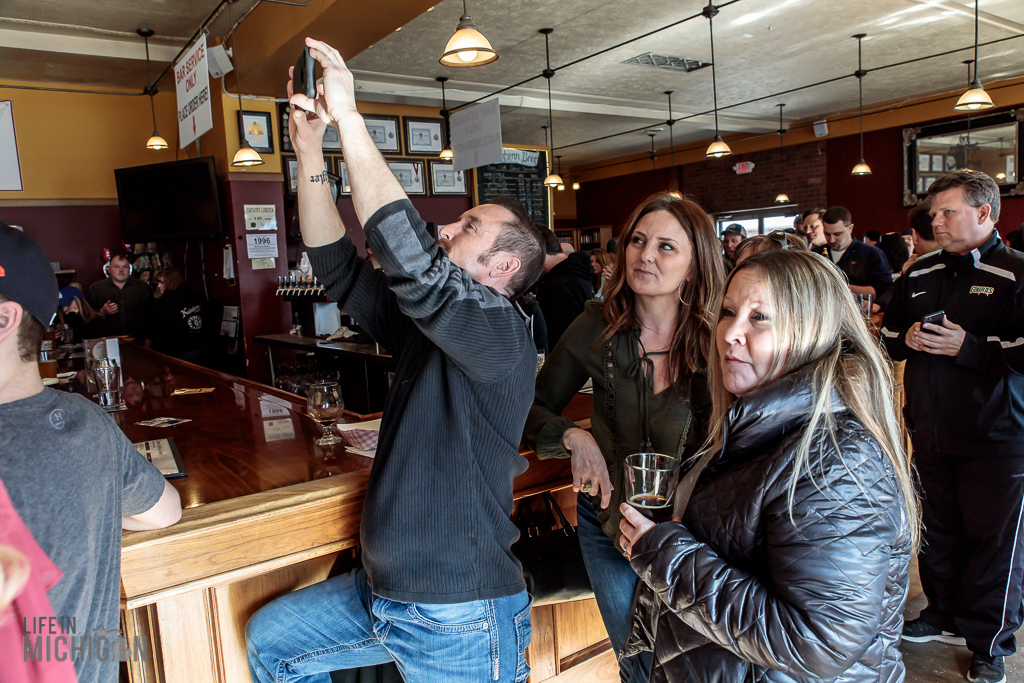 With a bit of coaxing from Vinnie and the crowd, Jon and Leon joined the band on the stage for a cover of the Ramones “I Wanna Be Sedated”. This capped an incredible afternoon of beer and music. It was a pantload of fun to witness the convergence of the captivating music of Sponge and the luscious beers of Kuhnhenn Brewing. We are hoping to catch more Michigan bands and brewers teaming up in the future. 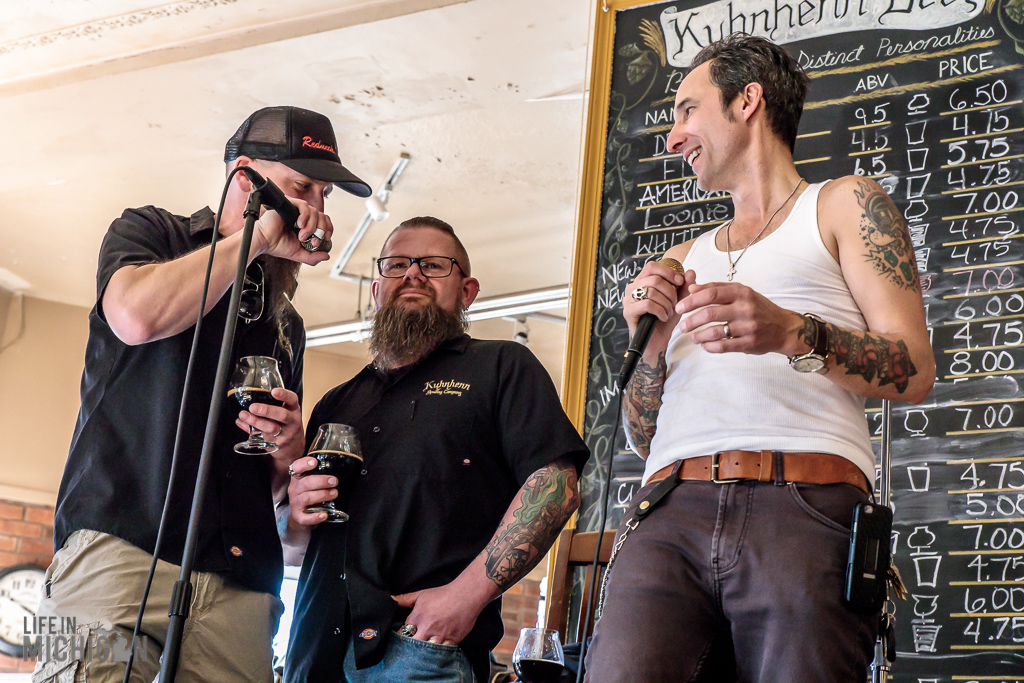 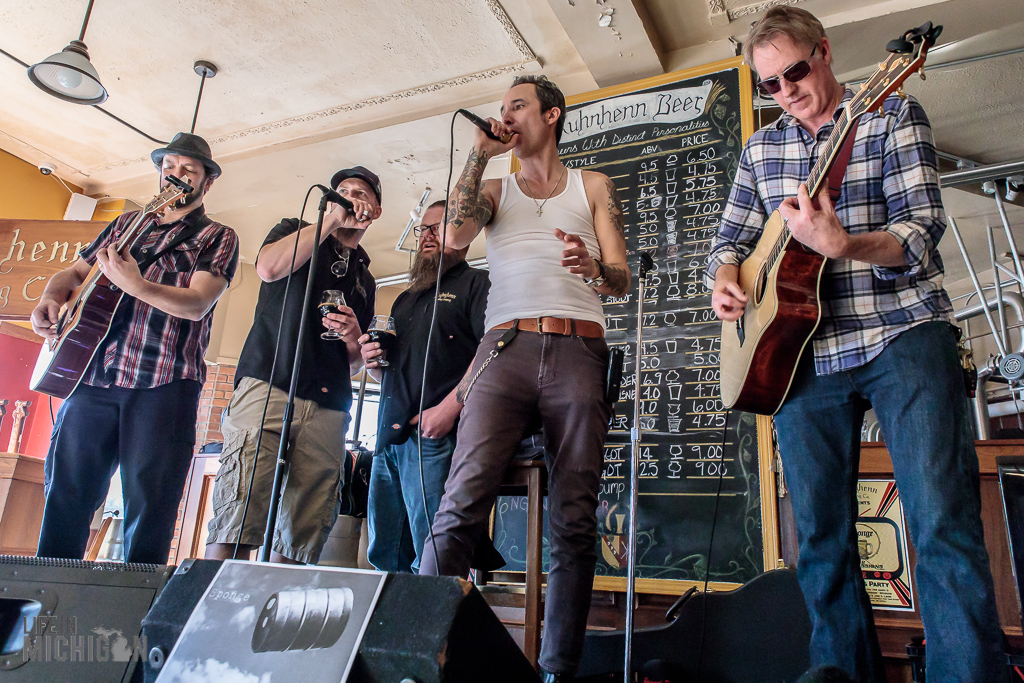 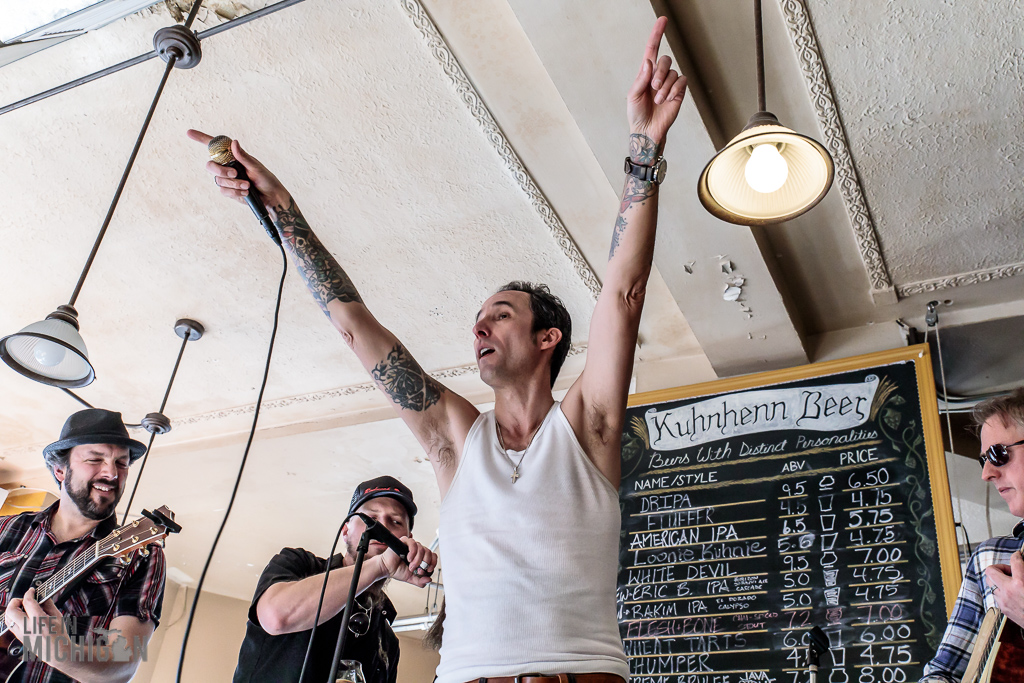 We’ve got a lot more photos from Sponge Beer Sessions Live at Kuhnhenn Brewing in our gallery. We’d love it if you’d share the pictures, but please give us photo credit. 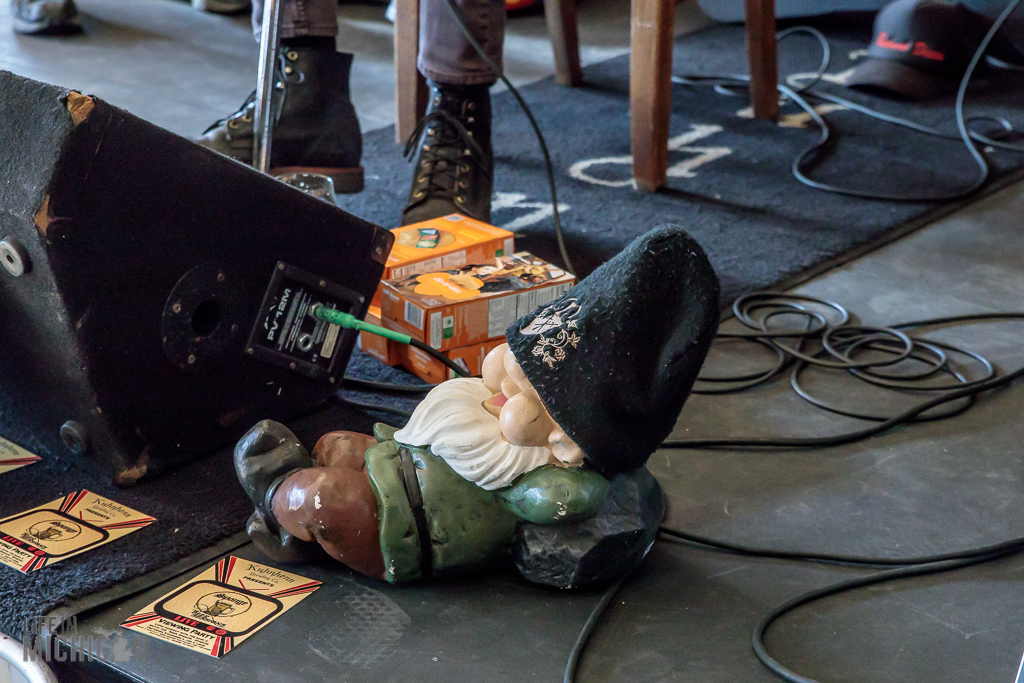 If you enjoyed our story about Sponge Beer Sessions live at Kuhnhenn Brewing, then share it on your favorite social media venue or send it as a link to your friends and family. This is good for everyone!