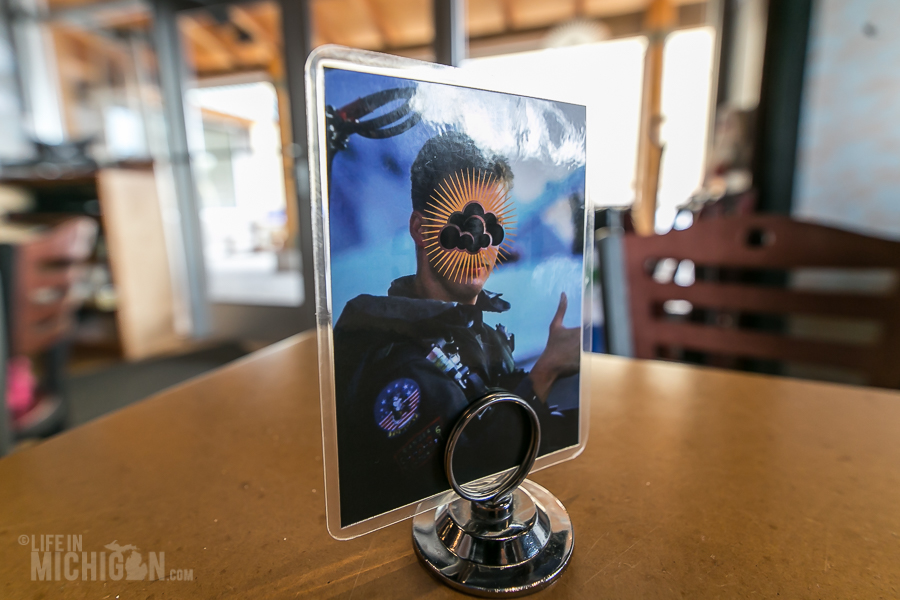 We have enjoyed Stormcloud Brewing’s beer on the S.S. Badger crossing from Wisconsin to Michigan and at the various Michigan Brewers Guild beer festivals. I mean who could forget “A Yooper and a Troll Kissing In A Tree” at the Detroit Fall Beer festival or “Tijuana Buddha” at the Winter Beer in 2015. When we read that Stormcloud Brewing had built its own curling sheet and planned to hold a tournament, we thought this would be a perfect time to visit. 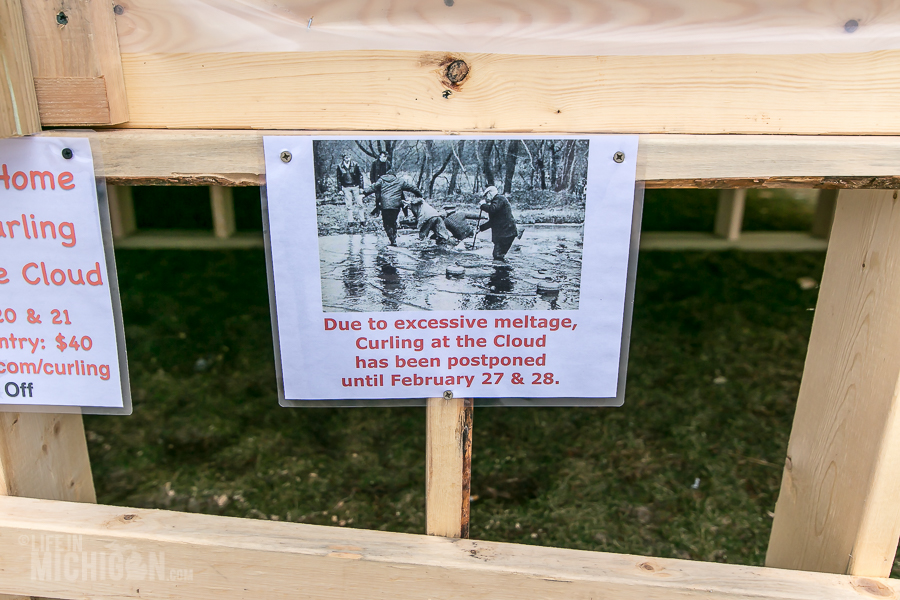 Sadly (or maybe not really so sadly), the winter had been warm and on the weekend we visited and there was no ice to be had. The curling match was canceled. No matter for us as we had a room next door at the Hotel Frankfort. We proceeded to get comfortable and enjoy some beers. Stormcloud Brewing is located at 303 Main St. in Frankfort. If you look down the street to the west you’ll see Lake Michigan. The town of Frankfort is on the shores of the lake with wonderful beaches that drawn in big summer crowds. While winter is quieter in Frankfort, it is no less fun with plenty of great winter activities available from ice fishing to snowshoeing. Inside Stormcloud Brewing you’ll find a wide open space with a great looking bar and plenty of seating. Thankfully the folks at Stormcloud know how to layout a room as there is plenty of space between tables to avoid feeling crammed in. Two walls of windows facing east and toward the street provide lots of light and the opportunity to watch the world go by as you enjoy a beer. 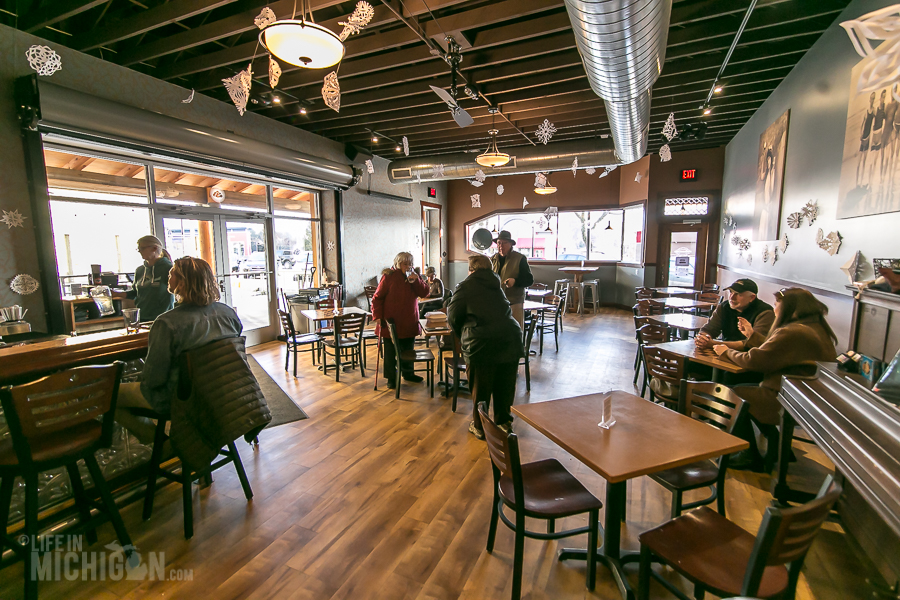 There is a homey comfortable feeling inside Stormcloud Brewing. It feels like they have been in this location for decades, yet they have only been open for a just under three years. We didn’t get to enjoy the outside as it was too warm for curling and too cool for relaxing on the deck. However they do have a great patio area and I’m sure the curling is great once it is cold enough. 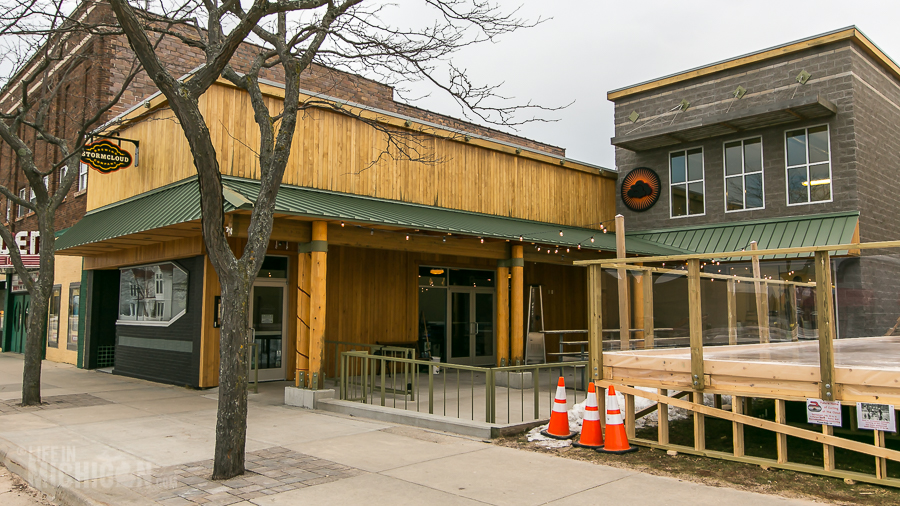 I’ll admit that when I started expanding my tastes in beers and ran into Belgian style beer, I wasn’t exactly thrilled. That experience was limited to either lambics or wheatie beers with a clove finish that I don’t care for. This had me a bit concerned when I first ran into Stormcloud Brewing. It pays to be willing to try new things and thankfully I found that you shouldn’t write off a beer because you see the word Belgian. 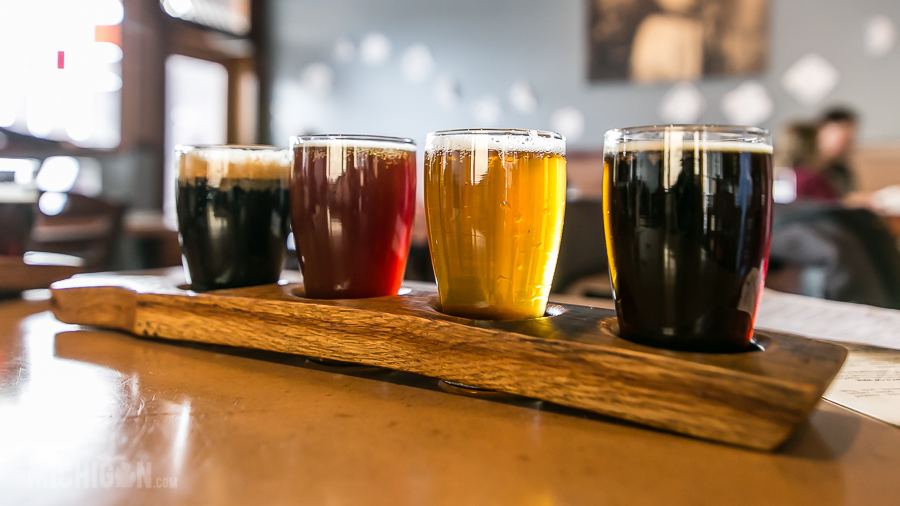 The beers at Stormcloud Brewing are awesome. With 18 taps there is a lot to choose from. Given there were so many choices, Brenda and I ordered up some flights. Each beer was well done, no watery losers or ridiculously spiced monsters to content with. Just some damn fine beers that made an afternoon of visiting with some friends all the more merry. The Farthest Shore, a traditional Belgian Strong, was rich and on the high octane end of the spectrum at 10% abv. Our favorite was Barrel’d Gerald which is a rye dubbel aged in whiskey barrels. You get the hint of whiskey without the beer being overly boozy tasting.

The fine folks at Stormcloud Brewing take pride in their food and work hard to use locally sourced ingredients. The flatbread pizzas are great and include tasty combinations of ingredients that go well beyond your standard pizza. You can also get them with vegan “cheese” which is a rarity to find in northern Michigan. 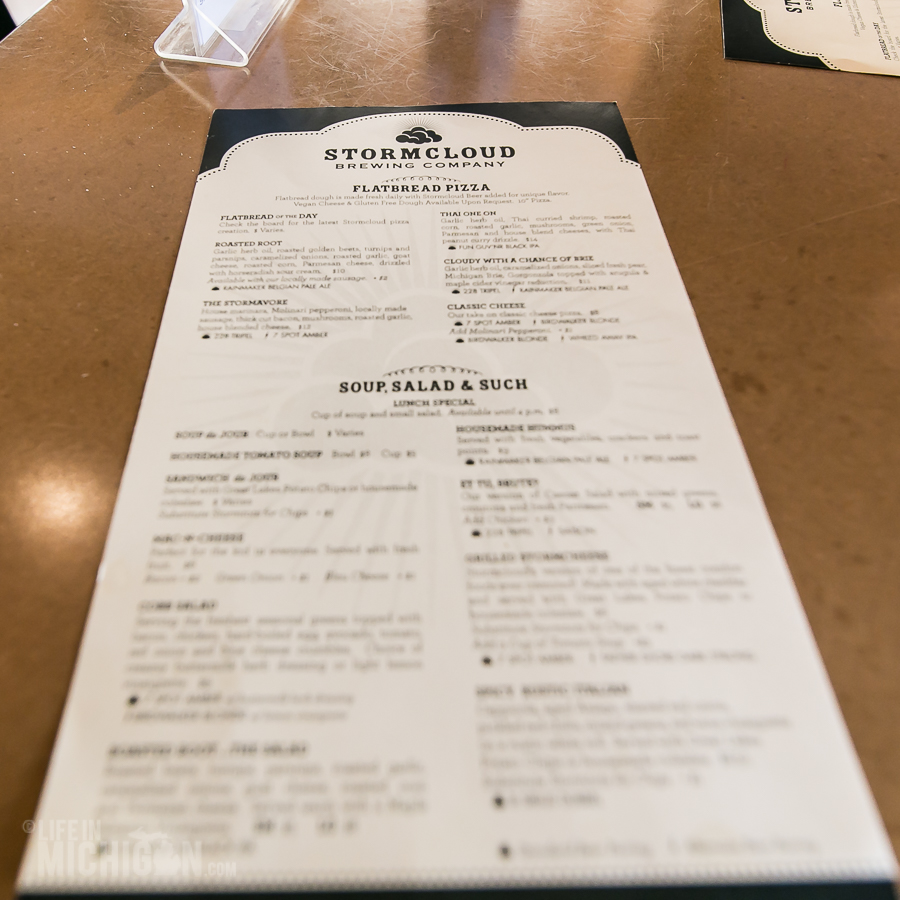 We had a great visit to Stormcloud Brewing. We are looking forward to stopping by in the summer and again next winter to see some curling. You can see a few more pictures of our visit in the gallery.

If you liked our little tale about our visit to Stormcloud Brewing in friendly Frankfort,MI, then please share it on your favorite social media venue or send it as a link to your friends and family.