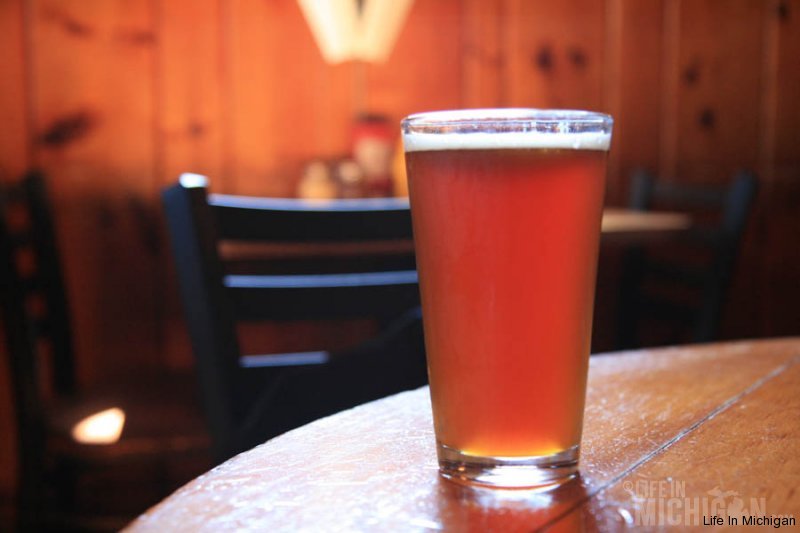 Ok, I admit it.  When we travel, the first thing I seek out after a place to stay, is where to find a local beer.  Whether the destination is Scotland or Traverse City, Michigan, finding good beer is part of what makes traveling fun.  That said, when we decided to run the Tahqua Trail race, I headed over to the Michigan Brewers Guild site to look for local breweries near our destination in Paradise, Michigan.

After we picked up our bibs for the Tahqua Trail race, we headed over to the Upper Falls for stop #1 on the Tahqua Beer run, Tahquamenon Falls Brewery. 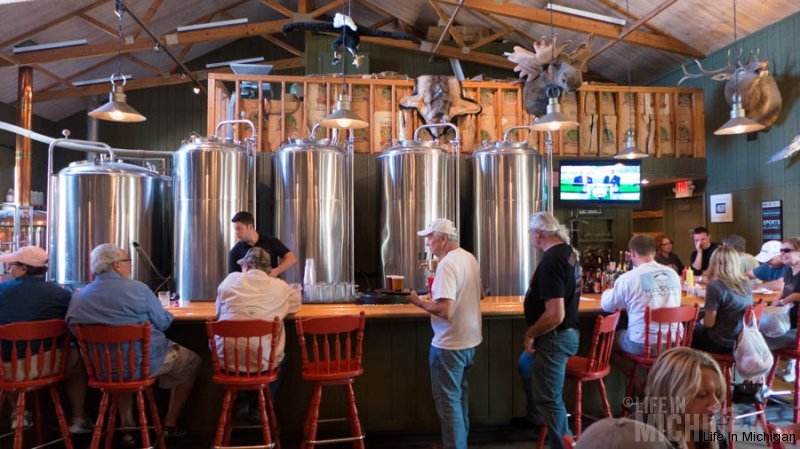 The interior has the U.P. lodge feeling with lots of animal mounts.  However, Tahquamenon Falls brewery does it a little different by including an array of stuffed animals.  I’m thinking this is to keep from scaring the hell out of the kids 🙂 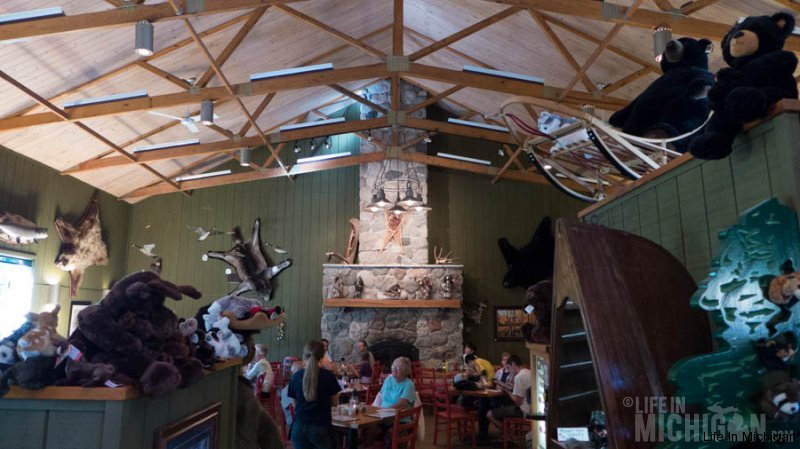 We sipped on some blueberry wheats and enjoyed the sunshine out on the deck as we waited for a table for dinner. 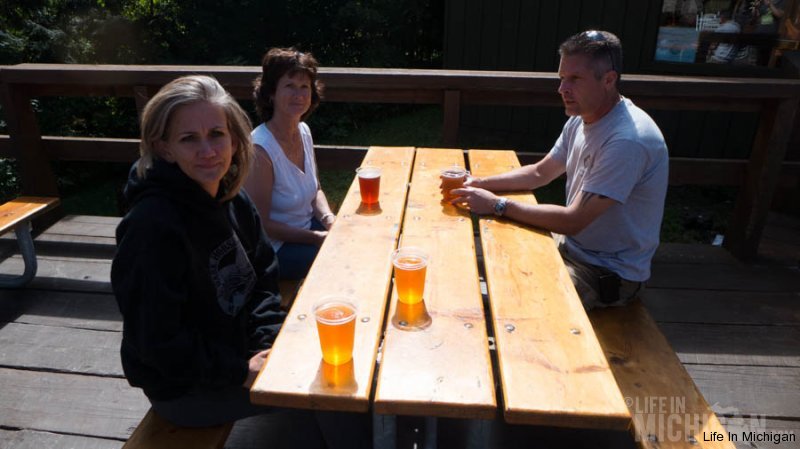 After dinner, we were off to check out Whitefish Point! 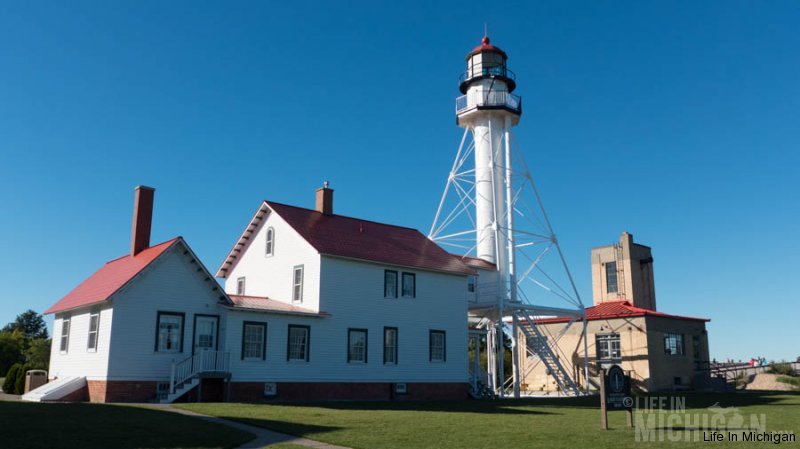 The light at Whitefish Point has been going since 1849, making it the oldest on Lake Superior.  In addition to the lighthouse, the point is home to the Great Lakes Shipwreck museum and is part of the Seney National Wildlife refuge.   A short walk gets you out to the beach which is adorned with stones and driftwood. 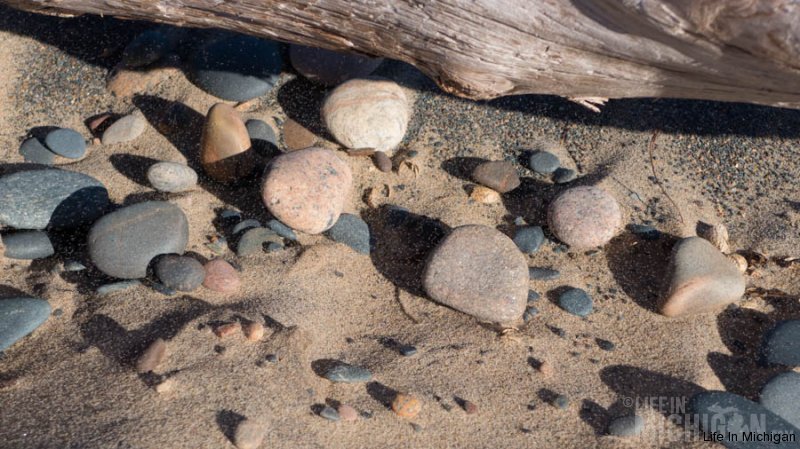 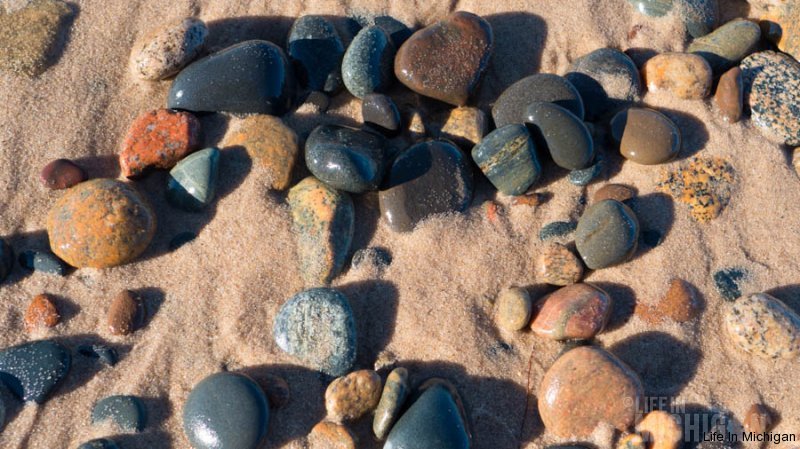 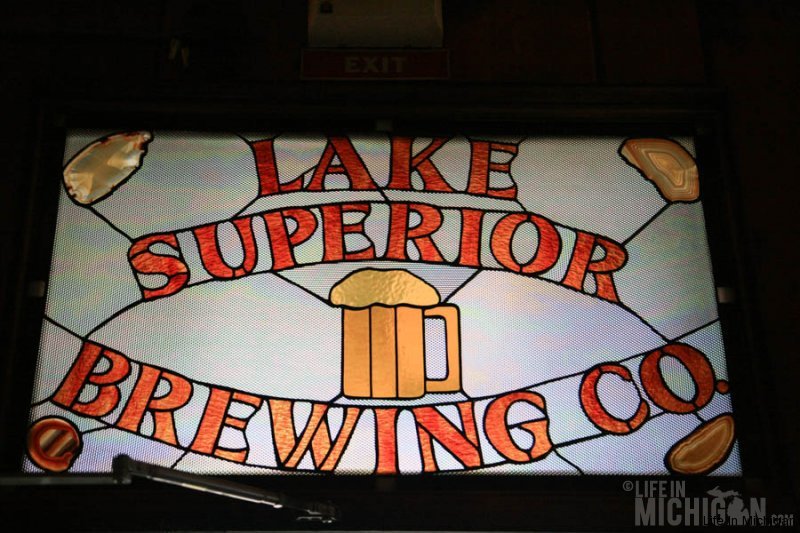 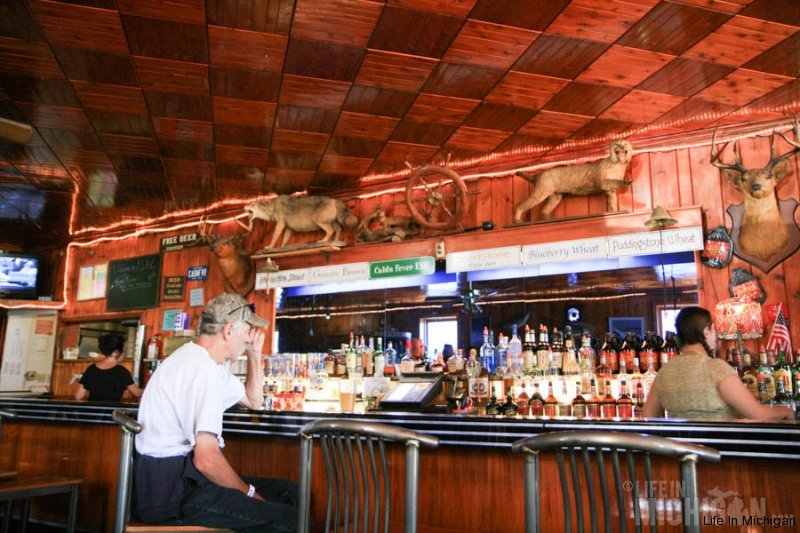 A super relaxed and friendly place to get some food and a beer (or two)! 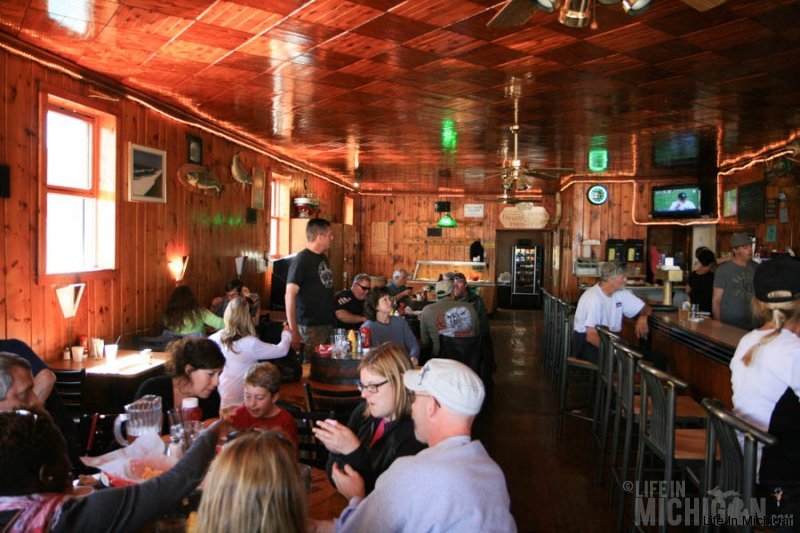 The Cabin Fever ESB was a big hit with us.  A nice medium bodied beer that tasted great on a sunny day.

I was starving when we arrived and order a 14 inch veggie pizza.  That pizza ROCKED!  I ate half with the rest coming back to the hotel with me for a night time snack 🙂 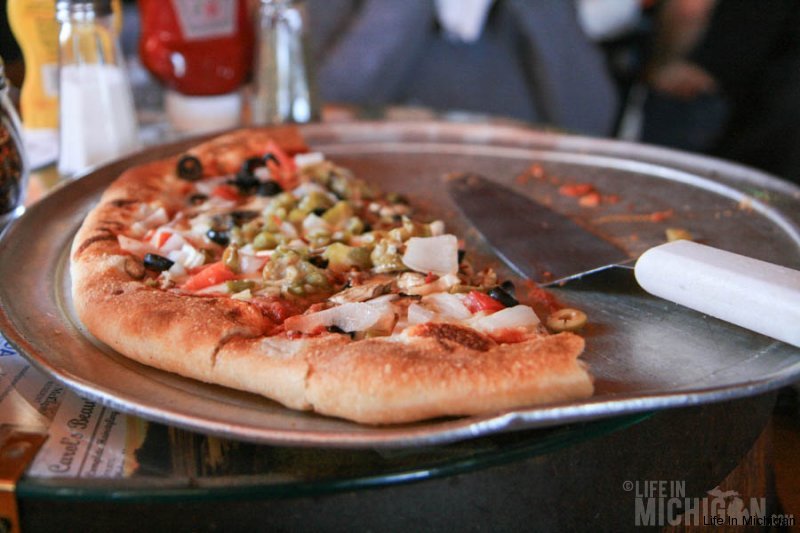 While in Grand Marais, we strolled over to the beautiful beach, just north of Lake Superior Brewing to take in the sights and see if we could find keepsakes! 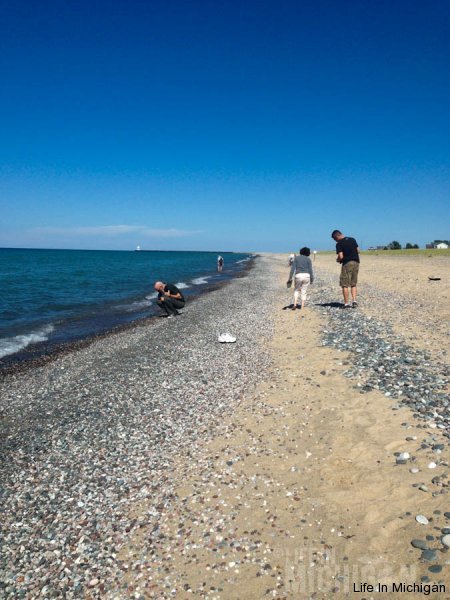 Its a zen moment when you are just searching for stones.  They look fantastic in the water! 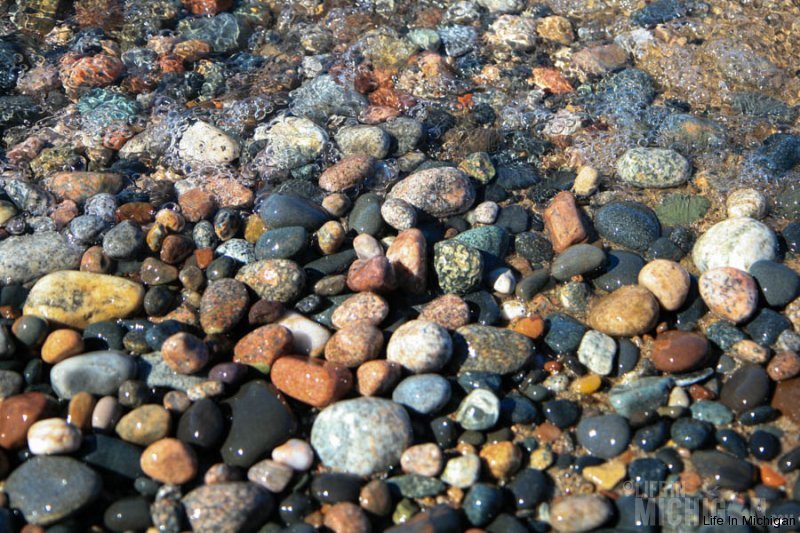 We stopped into Bayshore Market to get a water for the road trip back to Paradise and look what a treasure trove of old school beers we found!  Blatz anyone???? 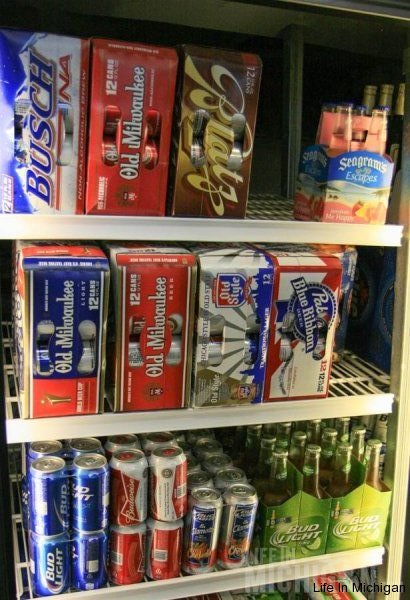 We made our way back to Paradise and figured we should get a true UP experience and stop in at the taverns in town.  First stop, the Red Flannel Saloon. 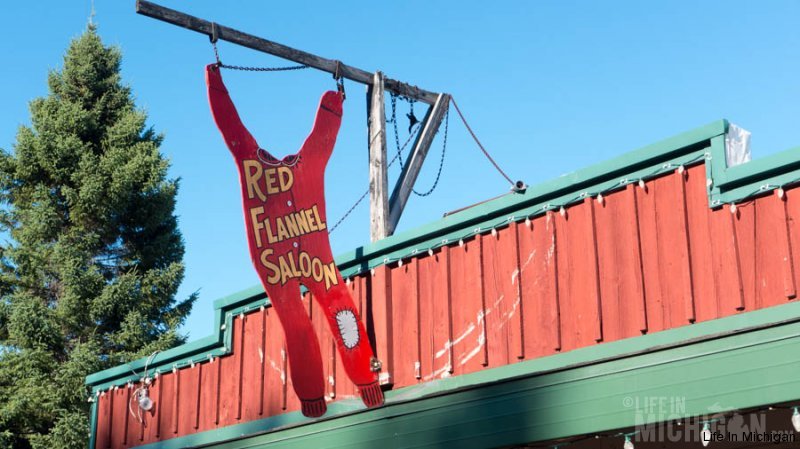 I was just about positive our beer options would be the usual Bud, Miller, Coors, but I was pleasantly surprised to find Bell’s and Keweenaw Brewing available!  Nice!   We didn’t eat any food, but we did enjoy a beer while watching WipeOut on the TV 🙂

Our final stop was the Yukon Inn.  This place looks like its been there since lumber boom days! 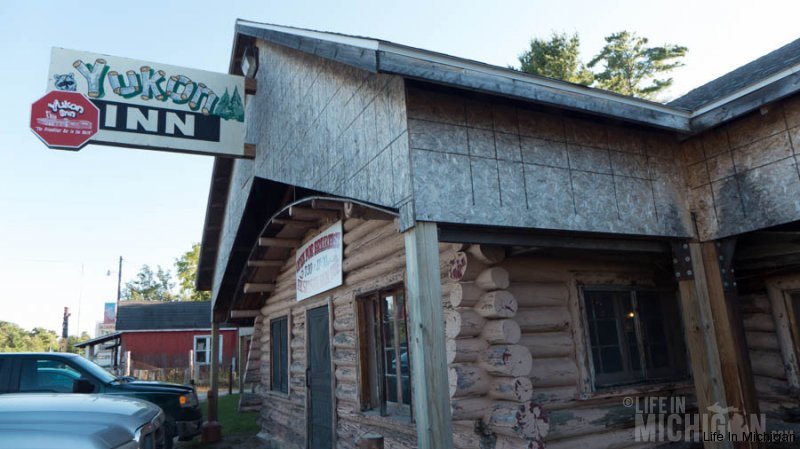 The inside is very cool.  A great old bar and some sturdy ass furniture to match the rustic interior. 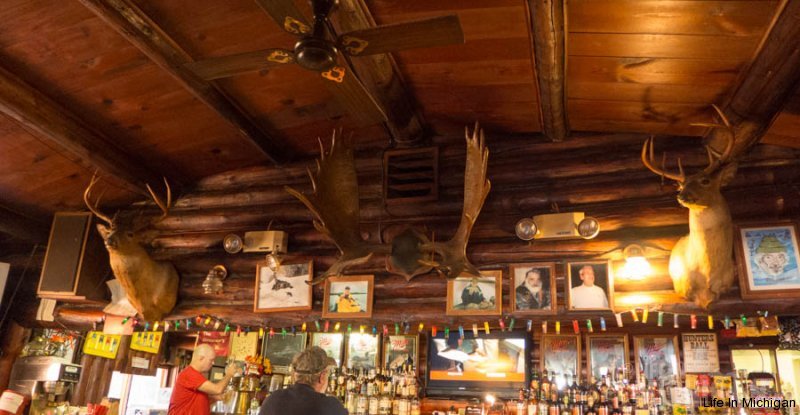 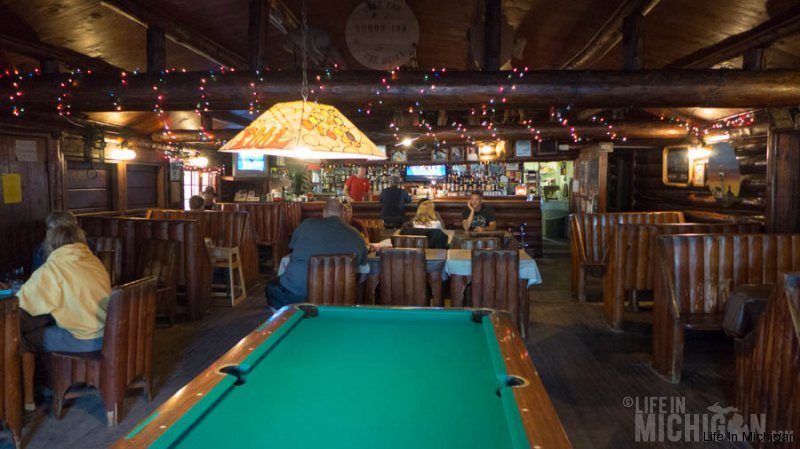 We were again happy to find that local Michigan beer was available (Keweenaw Brewing), however I had to go old school and got a PBR 🙂  We didn’t eat at the Yukon Inn either, but we heard they are famous for the Yukon Burger.  Not that I’m going to be giving it a try anytime soon, but this guy thought it rocked!  After our beers, it was time to head back to our rooms and get ready to head home in the morning.

The next day saw us on the road early to head towards home.  One last stop on our trail race weekend was at Redwood Lodge in Flint.  All of us have had quite a few good beers and damn tasty meals at Redwood and this occasion was no exception.  If you have not been to Redwood Lodge before, its a very nice open space with a large bar area and ample dining room. 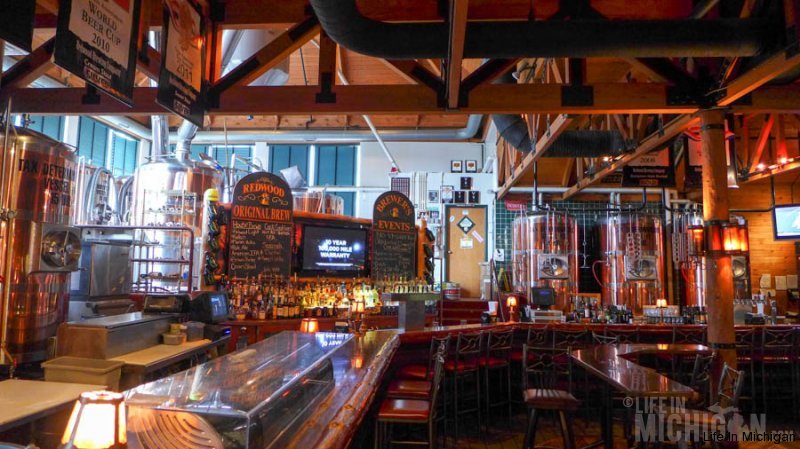 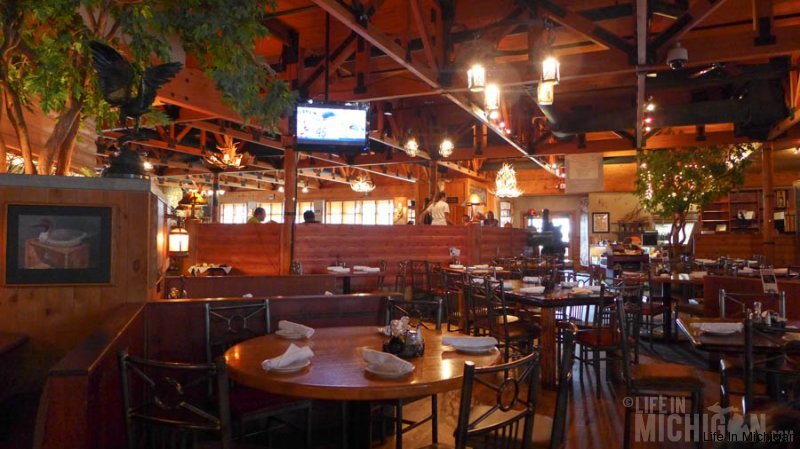 Brenda was greeted by the bear at the door. 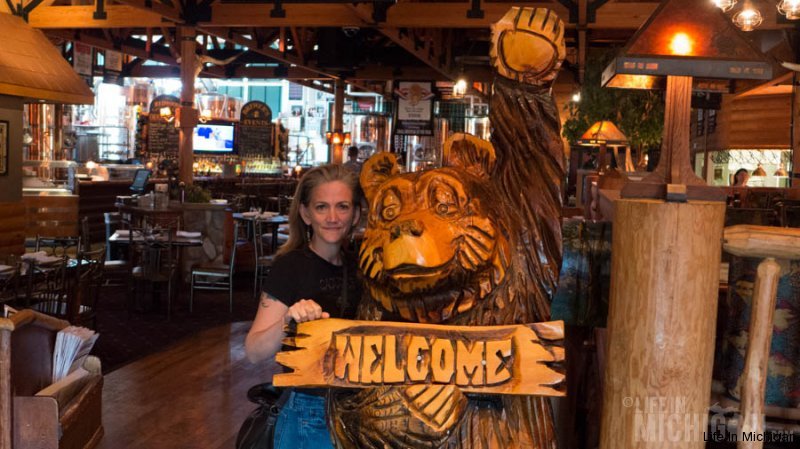 We enjoyed our lunches with the cask condition IPA and Hairy Lil Sista, which was an imperial lager with a nice citrus hop touch.  Good stuff!!

All in all, we had a fantastic time running, touring, and drinking up in the U.P.!  For even more pictures, head on over to the gallery!