Getting to experience a drive-in concert with some of Michigan’s best bands is a treat to savor at Arts, Beats, and Eats – The Beats Go On featuring Stone Clover and Jennifer Westwood and the Handsome Devils. 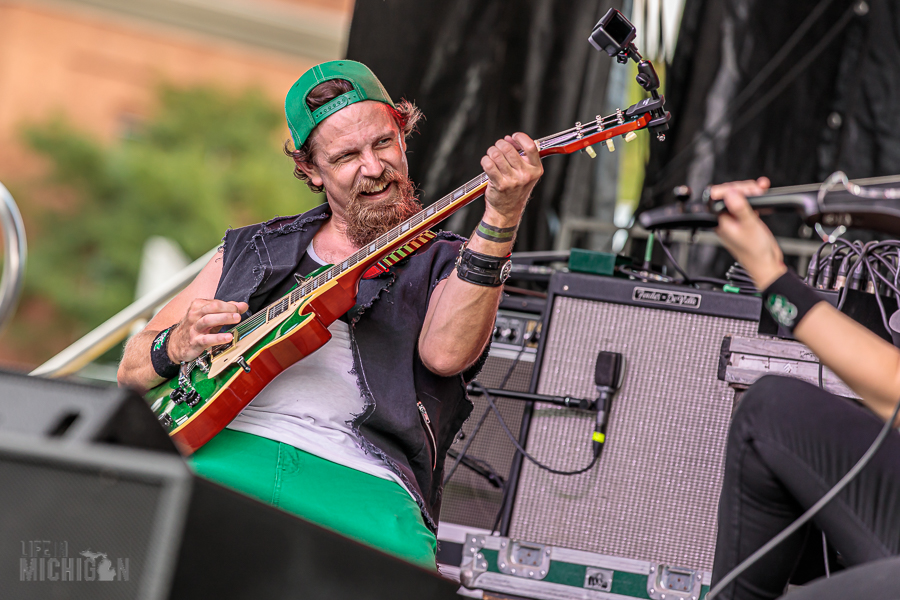 The Beats Go On

The pandemic has impacted all aspects of our society and live music is no exception. After running for 22 years, the Soaring Eagle Arts, Beats, and Eats festival in Royal Oak was forced to cancel to protect public health. Instead of completely folding up shop, Soaring Eagle shifted gears for this year to create The Beats Go On.

The Beats Go On started on July 22 with major fundraising campaign to raise money for local musicians who being hit hard by the pandemic and loss of revenue. Oakland County is kicking in the matching funds. This means every dollar you can give has double the impact.

Starting on August 27 through September 3rd, The Beats Go On hosted a series of virtual shows featuring over 400 bands playing music across the spectrum of genres. Over the Labor Day weekend which would have been the traditional festival timeframe, The Beats Go On culminates in a drive-in concert series with all ticket proceeds going to the artists.

We saw that our friends from Stone Clover and Jennifer Westwood and the Handsome Devils were playing on Saturday afternoon/evening. Never ones to miss a party, we bought our tickets and headed down for the show. 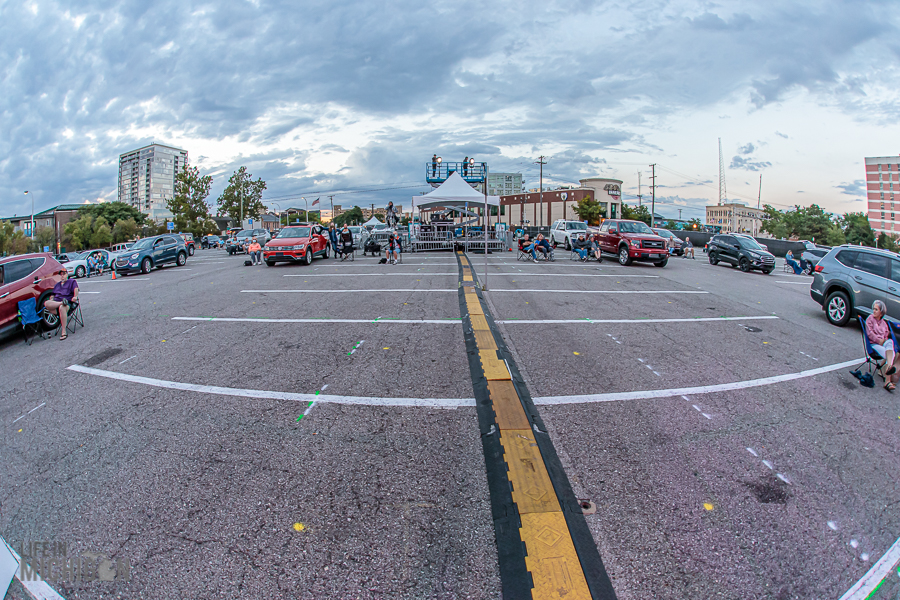 The drive-in concerts at the Beats Go On is held in a parking lot at 7th and Main in Royal Oak. The stage was on 7th facing toward 6th. The entry into the event was smooth. All the cars were 15-20 feet apart. There was plenty of room to set up your chairs and enjoy the show. Thankfully, mother nature graced us with partly cloudy skies and mild temperature.

The first show for our quadruple header at The Beats Go On features rock music with a bit of a Celtic edge. First up is the Corktown Popes. They have been the life of the party since they started throwing down in 2010. The band features Terry Burns (vocals/guitar), Steve Taylor (mandolin), Jason Kuehn (guitar), Jason Gittinger (drums), Dave Uricek (bass), and Pauly Goodmen (accordion). 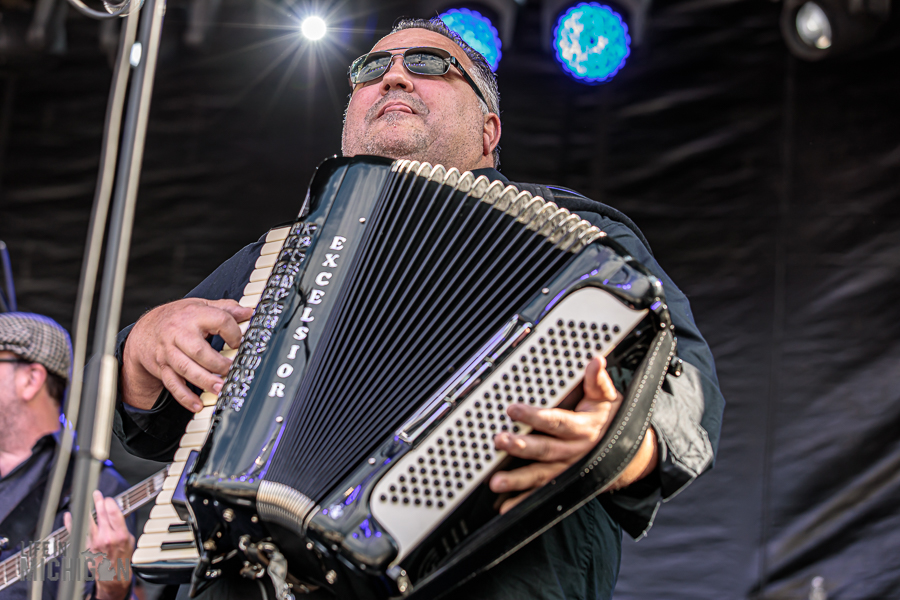 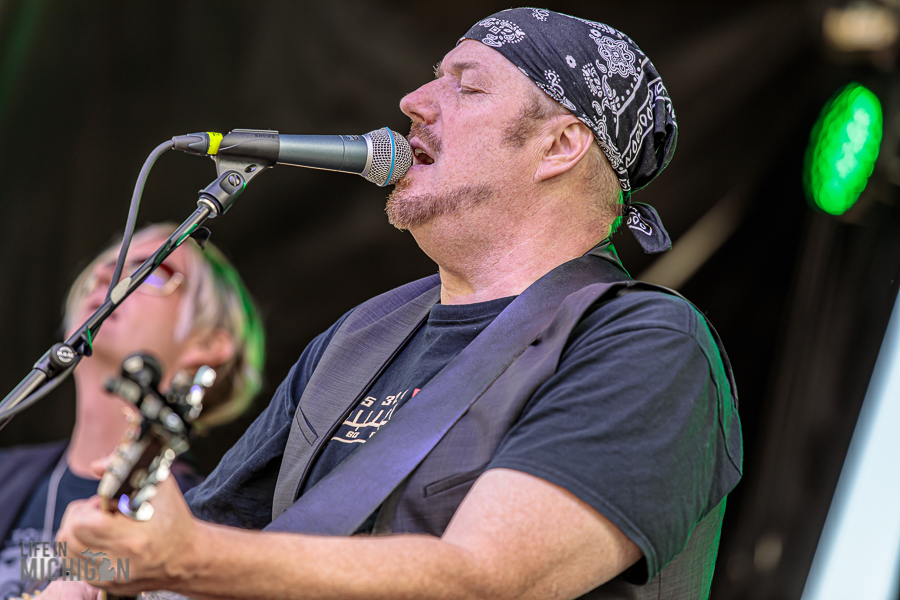 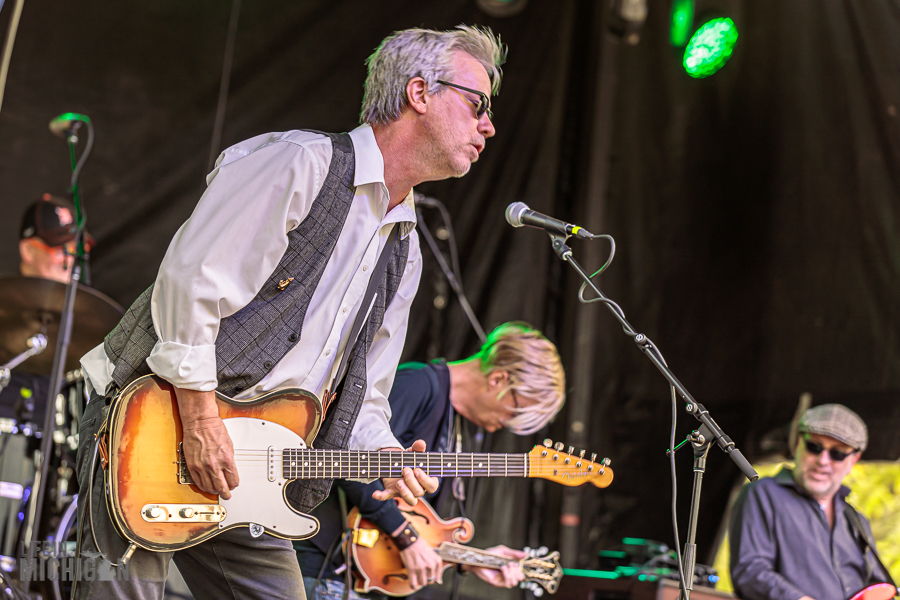 The Corktown Popes put on an energetic set of music. There’s an uplifting and happy quality thanks to the accordion and mandolin. Yet, the Popes keep it rocking with guitar, bass, and drums. Their set included “Doubting Thomas” from their ‘And Also with You’ record which came out back in 2013. 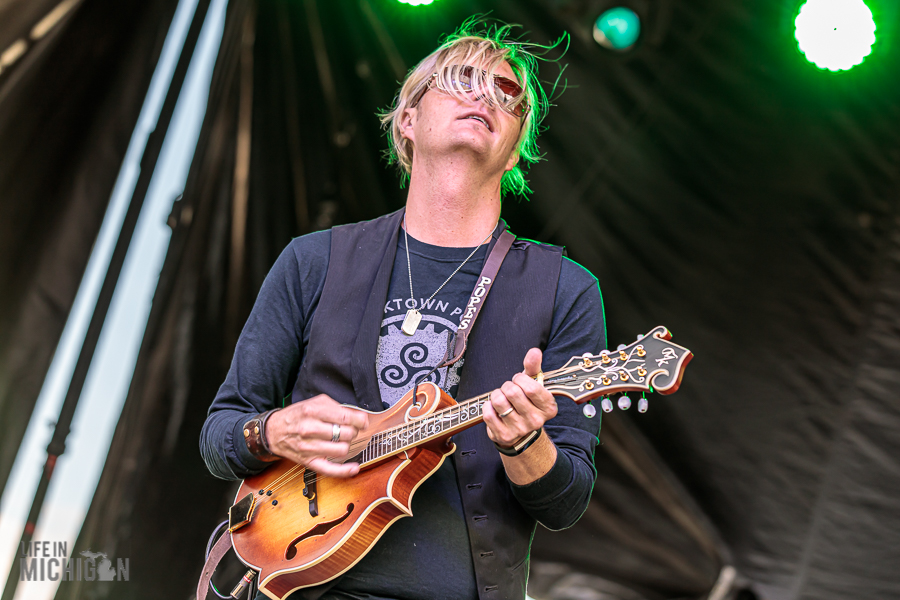 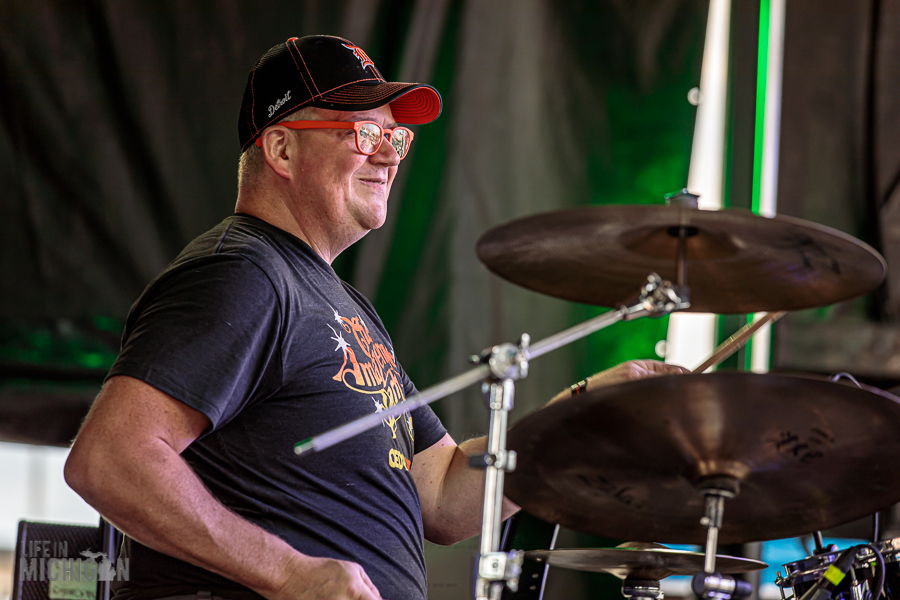 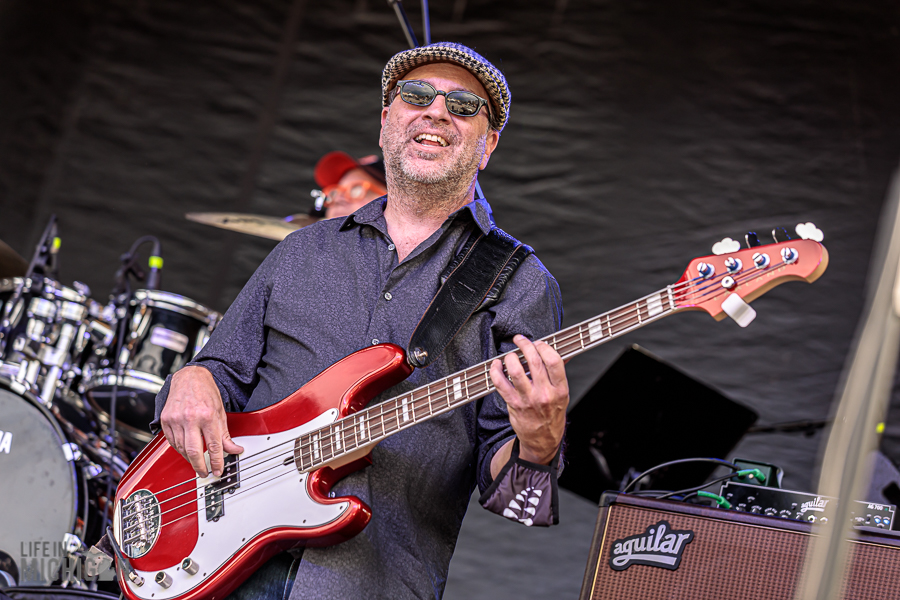 We have been big fans of the Stone Clover since we first saw that at the Michigan Brewers Guild summer beer fest back in 2015. Since then, we’ve been keeping in touch and enjoying their irresistibly fun and action packed brand of Celtic rock music. Whether at the St. Andrews Highland Games, a beer fest, or flexing some Motor City muscle in downtown Detroit; Stone Clover always delivers. 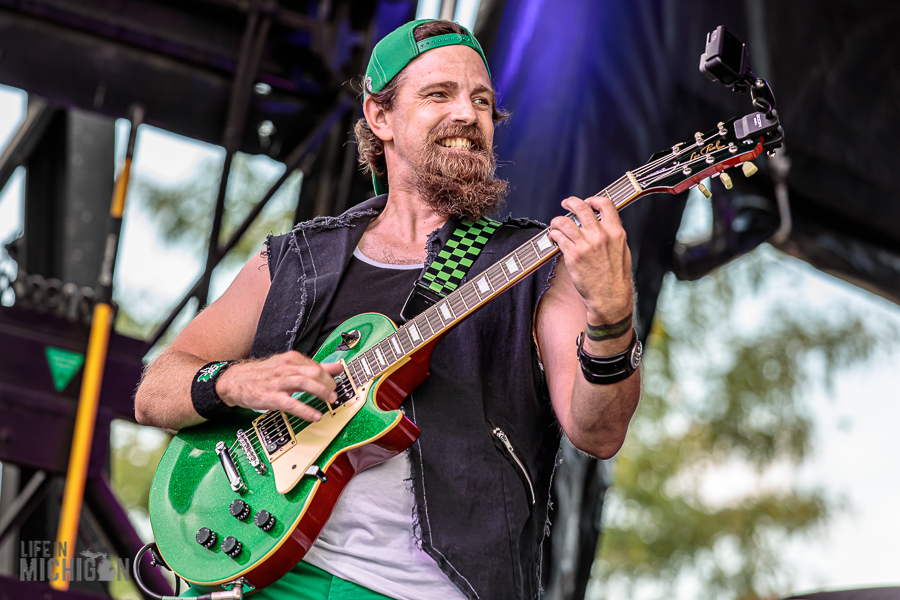 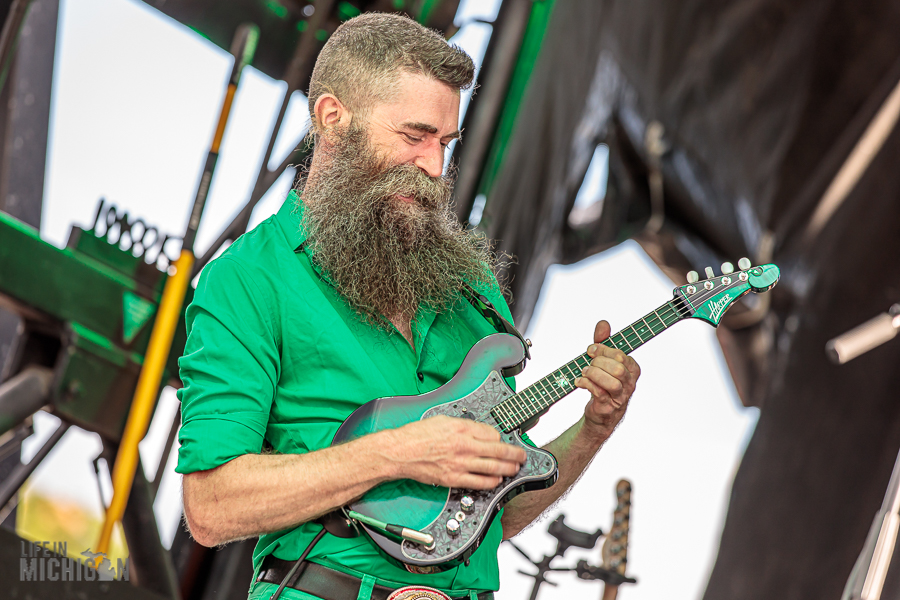 The entire band seemed to be radiating with happiness of being on stage and in front of a real crowd. Playing old favorites such as “Awesome”, “One More Beer”, and “Binge & Purges” seemed to fuel the band and the crowd. Newer songs like “Patron Saint of Cider” and “The Grind” sounded fantastic blasting from the Beats Go On stage. 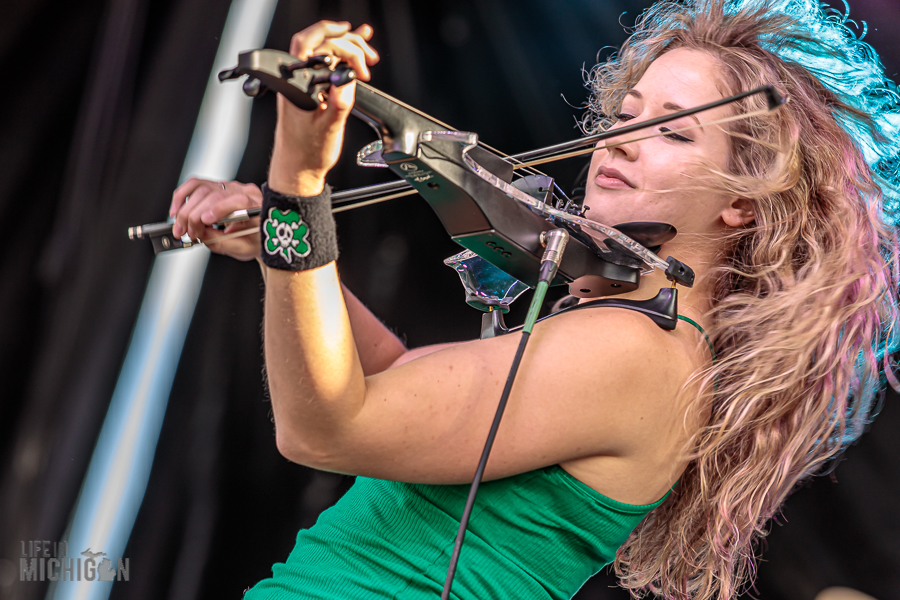 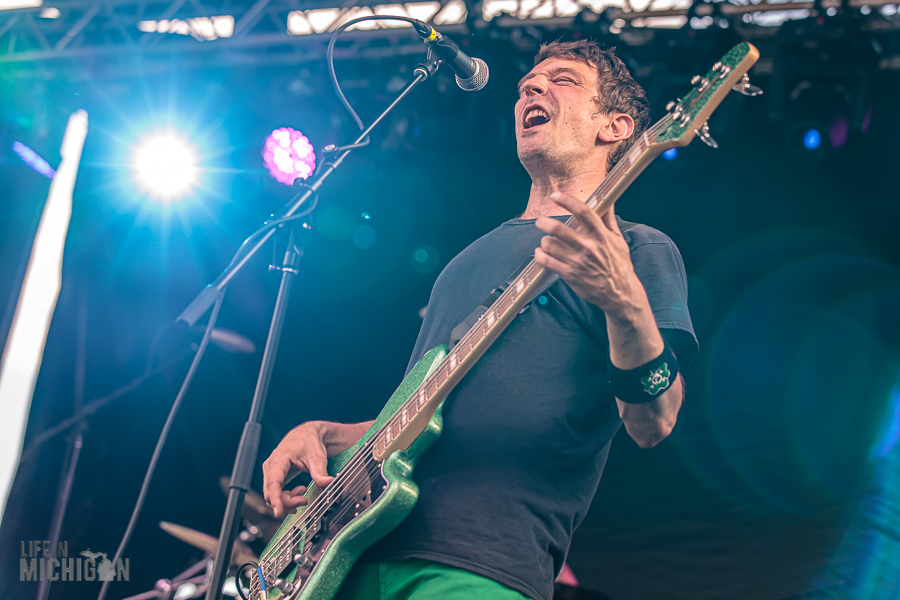 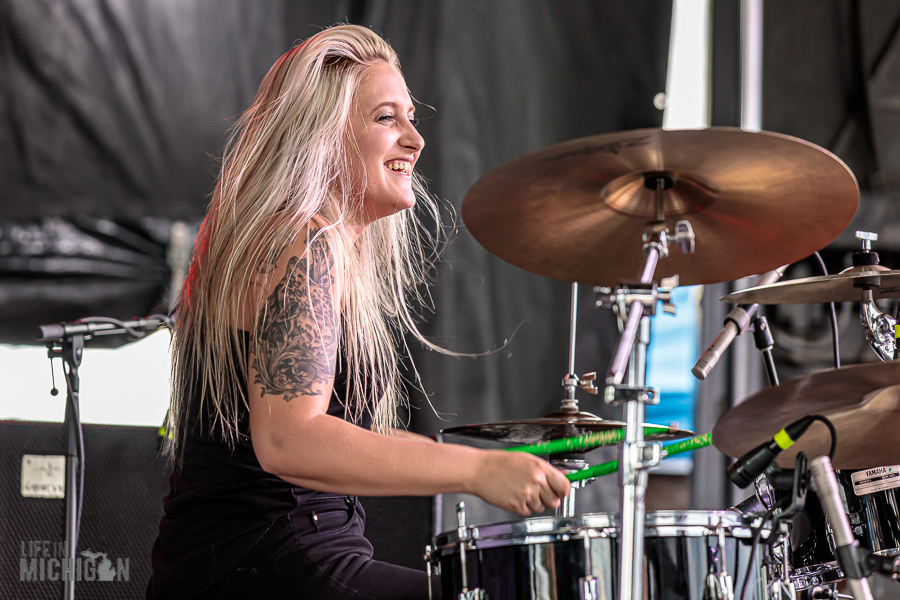 Vocalist/guitarist and fearless leader of Stone Clover, Pauly Brady mentioned that the band is working on a four EP (20 songs!) project called “Death To the Life of Riley”. To help with costs and also raise money for matching grants to benefit other Detroit bands, Stone Clover has a fundraiser running. As a taste of things to come, the band whipped out a couple of new songs. They have the classic Stone Clover mix of gritty Celtic rock with stories to tell.

Stone Clover marked the end of the Celtic Rock show at the Beats Go On. A new audience drove in for the next country themed show. Opening up the second show was the amazing vocalist/songwriter Raye Williams. I immediately recognized Detroiter turned to Nashville guitar slinger; Shane Sanders. He use to tear it up with one of my all time favorite bands, Black Irish. Handling keyboards, backing tracks, and digital drums was Yorg Kerasiotis. 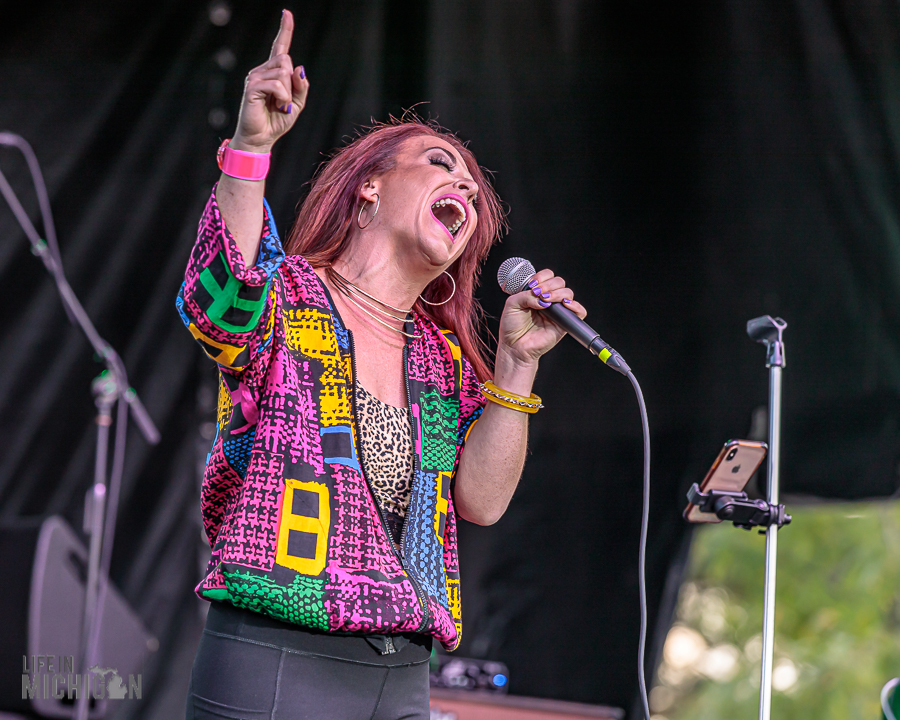 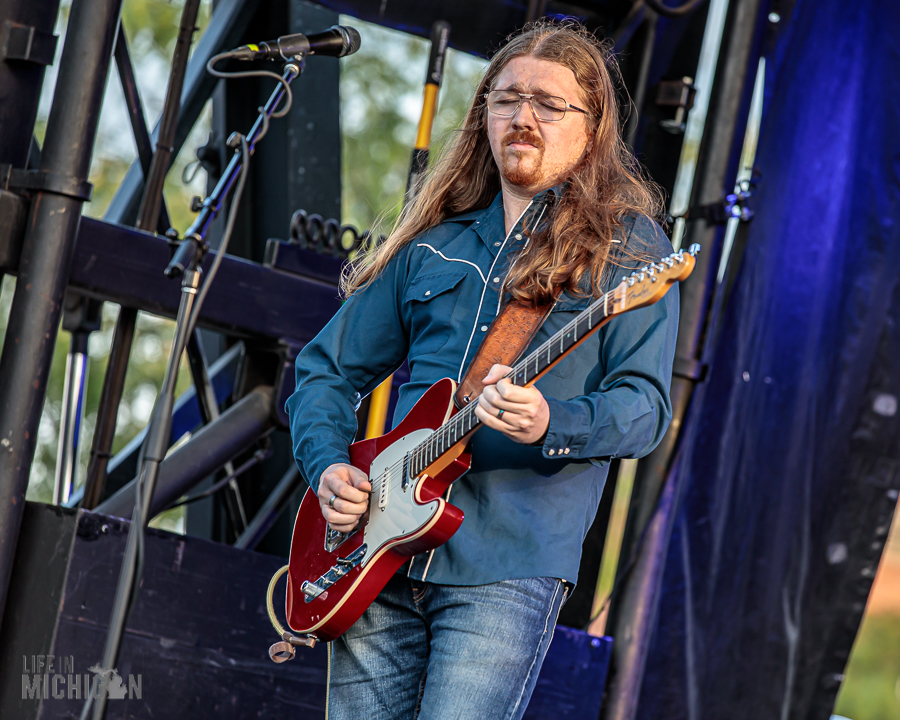 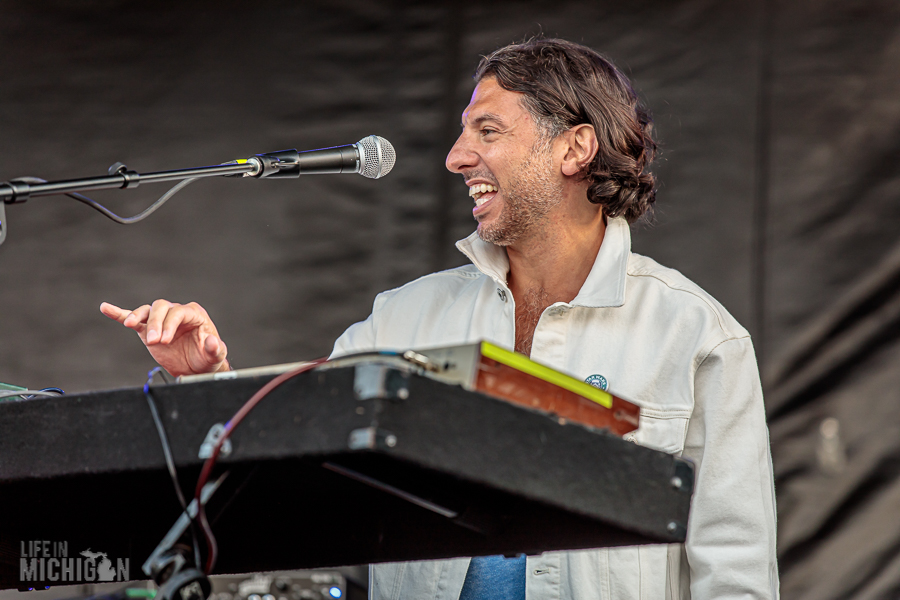 Having never listened to Raye, I did not know what to expect. After a few notes, it was clear she is a powerhouse singer. Her range and dynamics were outstanding. While country may be in her roots; Raye is clearly moving toward an amalgamation. One that inherits from soul and R&B while moving more into a dance/pop vibe. 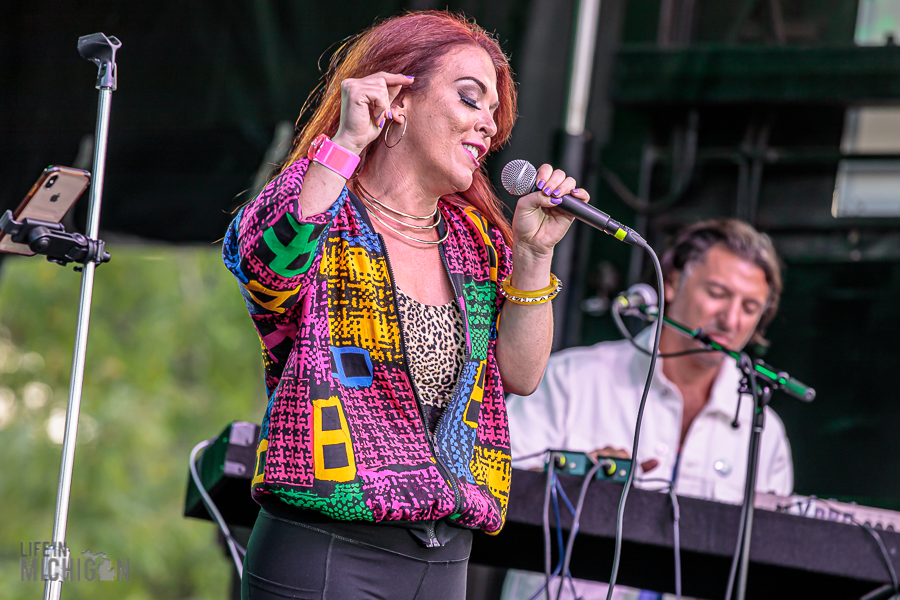 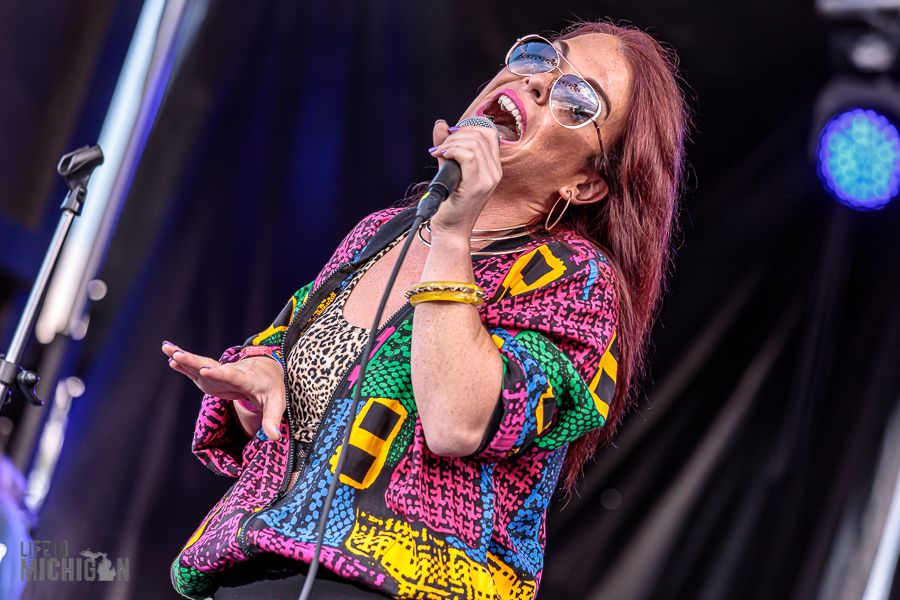 While 2020 is a tough year on anyone’s calendar, it has been especially challenging for Raye who is a recent cancer survivor. To have recovered so quickly and have that much power in her voice is remarkable. She was particularly impressive when covering Whitney Houston’s “I Wanna Dance with Somebody”. There is no doubt Raye Williams is an impressive vocalist.

Rounding out our experience at the Beats Go On in Royal Oak is the incomparable Jennifer Westwood and the Handsome Devils. Jennifer Westwood and Dylan Dunbar are the dynamic husband and wife core of the band. We had the great fortune to hear them play outside as part of Manchester Underground Music and Art. This show out in Manchester featured the duo playing music under a beautiful blue sky. It was the first show we’d been able to see experience since the pandemic started. 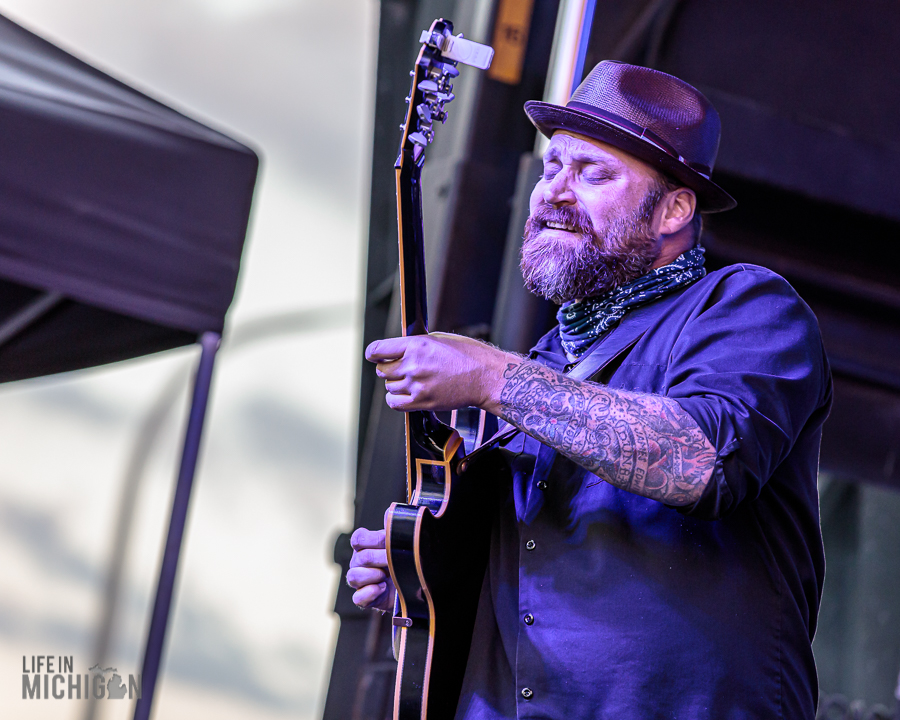 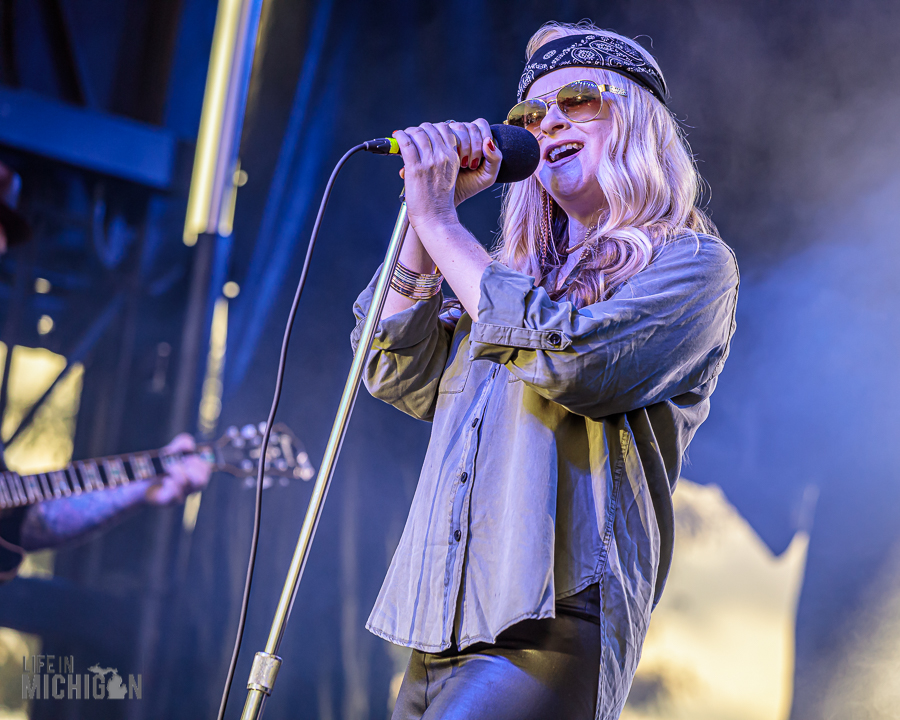 Tonight at the Beats Go On, Jennifer Westwood and the Handsome Devils were a full band with Detroit superstars Chuck Bartels on bass and Katelynn Corll on drums. With the sunlight starting to fade, the stage lights framed the band as they started to roll. Once again, you could see the joy of being on a stage and playing to a live audience radiating from them. I couldn’t help but smile. The ebullience of this moment seemed to wrap us all in a happy glow. 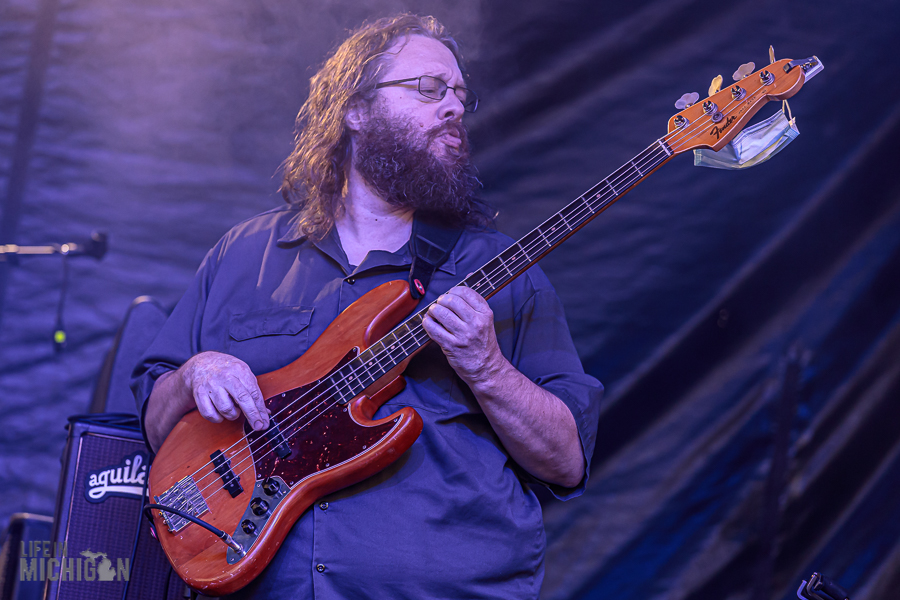 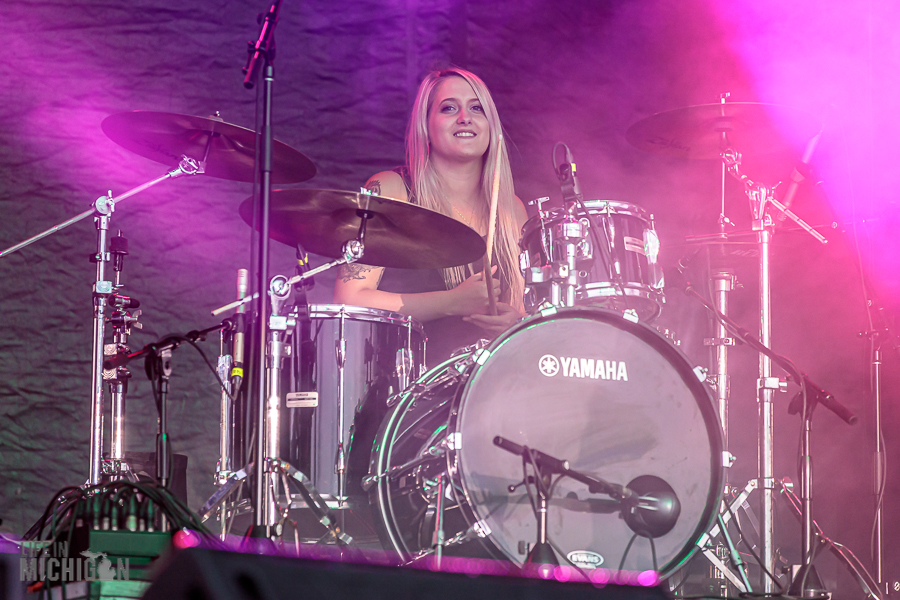 Jennifer Westwood and the Handsome Devils sounded outstanding playing our favorites such as wistful “Marfa Lights” and the driving “Nothing A Bourbon Can’t Fix”. Every song played with the precision and passion of road tested band. This is clearly a testament to the caliber of musicians on stage.

One new tune in the set was called “Jesus on the Mainline”. This tune sizzles with soulful blues. Jennifer hinted that this song would be part of a new release featuring a gospel theme. Jennifer Westwood and the Handsome Devils closed out their set with their riveting rendition of “Jolene” by Dolly Parton. Brenda and I were singing along to the chorus. Thankfully we were far enough away from folks to avoid ruining their night. 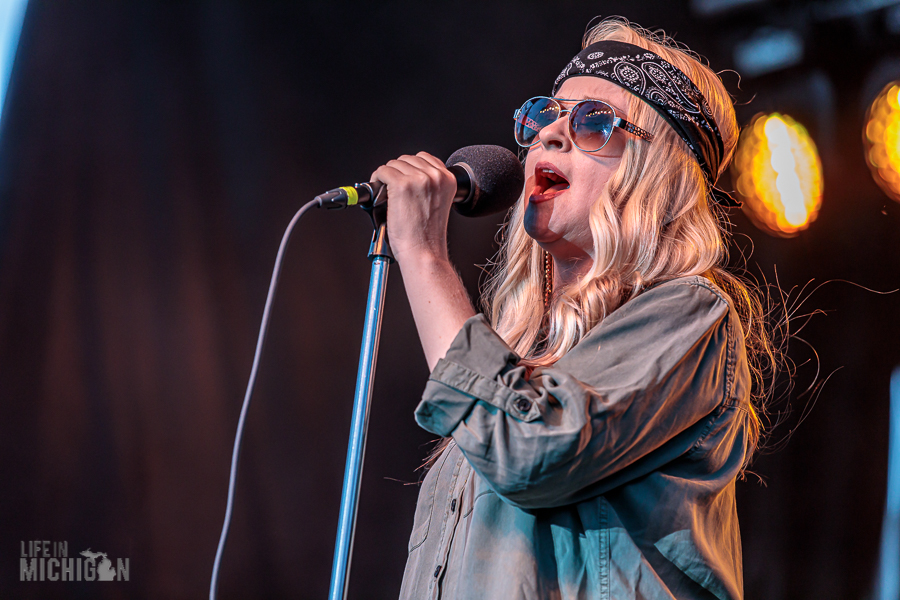 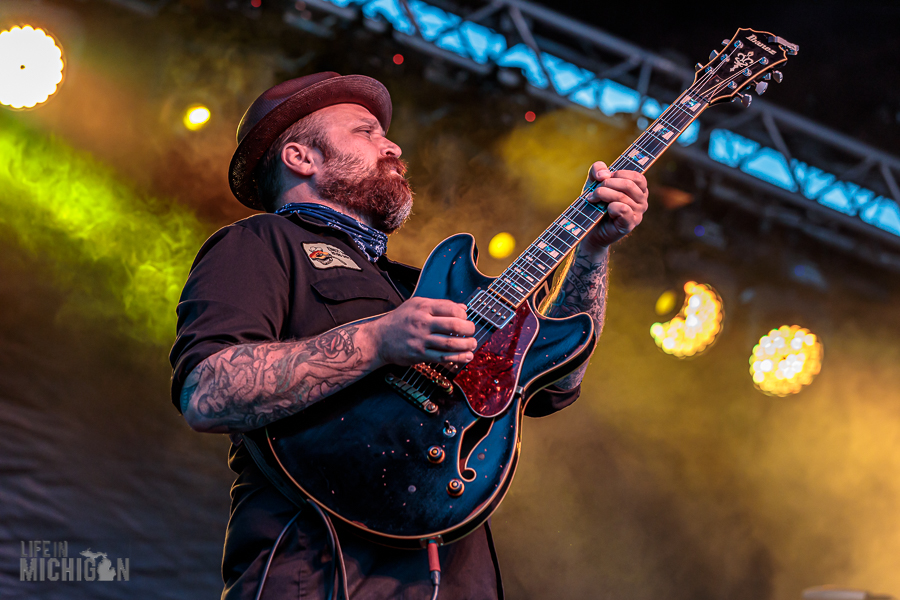 We very much enjoyed attending our first drive-in concert at the Beats Go On. The team who put this together deserve many thanks for a smooth running show. Besides great music, it was a pleasure to see the satisfaction on the faces of the artists. I think we may have taken the gift of live music for granted. I know that we are extremely grateful to have it back in whatever form works best to keep people safe and stay sane during these troubled times. 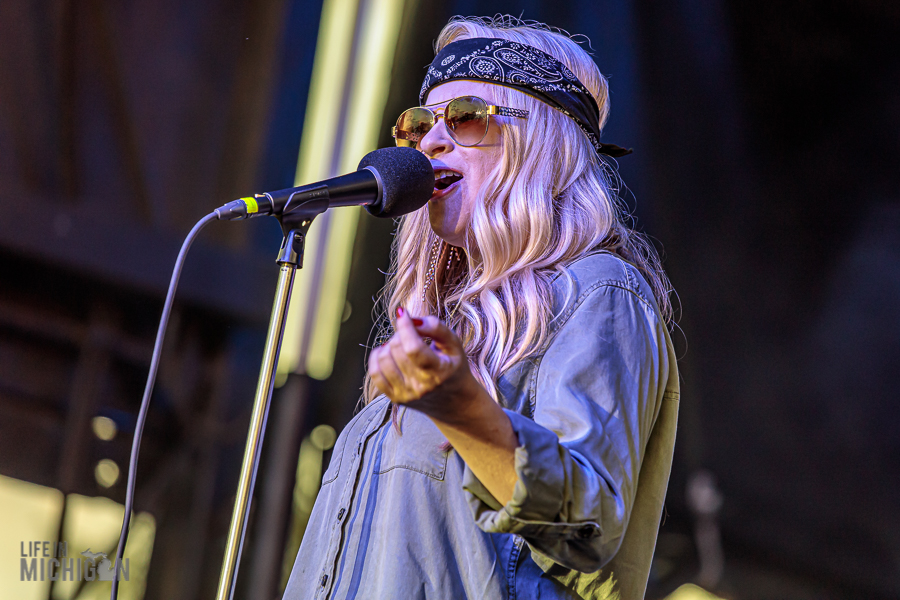 We have a few more pictures from The Beats Go On with Stone Clover and Jennifer Westwood Enjoy the images. Contact us regarding any use.