My dear Aunt Alice is a historian and has been documenting the Brown Family History for over 50 years. Aunt Alice and Uncle Milner’s vacations included detours to cemeteries, courthouses and libraries. She said to me during a recent visit, “Did you know most old towns have a street named Cemetery Street?” I did not. I learned many things during that visit including how she met her husband, Milner Brown. She said, “I got picked up! I was walking down the street with my girlfriend and Milner drove by in a car.”  I’m sure there is more to the story but she wasn’t sharing.

Aunt Alice has boxes of photographs, folders of documents, opinions and many stories to share. It was during our afternoon together that she reminded me of several important family documents:

The following is the abridged version of these documents littered with my comments. If I’ve tangled a fact or two, please leave a comment below and I’ll be sure to correct. This is by no means the complete story, but just the beginning and I hope that others will join the conversation.

The village of Puddington in Northamptonshire, England, seems to have been the home of the Browns. William and James Brown, who came to the United States, lived there with their father William Brown. James, the son to whom we, the Albert Brown Family, trace our origin came to America before 1680 unmarried and several years before his brother William. William had some difficulty persuading his wife to leave England. I can’t imagine why! 1680 was only 40 years after the Mayflower had arrived. She’d probably heard about the Indians. Sadly she died at sea. Good grief, men! Always talking us into something we know is not a good idea.

James Brown (William’s son) married Honor Clayton. She came over to the United States in 1677 with her father. James and Honor Brown had a bunch of kids and one of them was Jeremiah Brown. He married Mary Goale in 1710. They, of course, had a bunch of kids. Their third child was Joshua and he was born in 1717. Joshua married Hanah Gatchel. And yes, they too had a bunch of kids. We are only concerned with Isaiah who was born in 1754 and married Miriam Churchman. (The Revolutionary War hadn’t even started yet!) Isaiah and Miriam had one child, William Brown and he married Rachel Milner.

I promise that we are inching closer to a few photographs.

In 1828, William and Rachel Brown drove overland in a covered-wagon from Lancaster County, Pennsylvania to Tazewell County, Illinois. They sold everything they had to make this trip, which included 112 acres and 2 perches (horses) to William’s cousin Jeremiah Brown for $2,700.00. They loaded up the family, seven children, including my Great-Great-Great Grandfather Joshua Brown, and two servants into two covered-wagons and headed west in late August, talk about a road trip, it took them 5 weeks.

How do you know where to head when you are headed west? Do you just head west randomly? William and Rachel apparently had a destination, Rachel’s sister, Kitty Wilson’s house.

There are several letters from William to his cousin Jeremiah Brown where he described his life so we know that upon arrival that William purchased a cabin from a Mr. Orndorff. It wasn’t large enough for everyone so during the first winter the “men” slept in the wagons.

In 1835 William Brown moved to an 80 acre farm which he purchased from Ebenezer Wright. (I love the name!) He and Rachel lived there until his death in 1852. It was on that farm the “Family Meeting” was held in probably 1930, more on that later.

William was a member of the Illinois State Legislature in 1834. Excuse me, 1834? Isn’t that the same year that Abraham Lincoln was elected to the Illinois State House of Representatives. I’m not making this up! Read the History of McLean County. We also have a letter dated December 4th, 1834 where William writes to his cousin, “ I am in Vandalia at this time and shall remain here until the first of March. I should like if you would write to me as soon as thee receives this and send me a statement of how your canals and railroads are coming on. I was elected to the legislature at the last election and as our state seems wild to follow the eastern states improvements…” (The capital was at Vandalia at the time.)

So the next time someone is bragging that their Grandfather was this or that you can whip out that factoid!

From the Brown Family History, “Grandfather Brown was a quiet man, tall, a little stooped, smooth shaven, and of a genial disposition.”  Grandfather Brown wrote “at the age of 64 he was beginning to feel the old man creeping on pretty fast” of his wife he said, “Rachel stands it pretty well, but begins to look older and not as stout as she has been.”

Note to Chuck Marshall: no matter how old I may look, you should never-ever mention it.

I think Aunt Alice has a picture of William Brown. Quick someone scan and send it to me.

Joshua Brown was nineteen years old when he arrived in 1828 in Tazewell County with his parents William and Rachel. He helped his parents get settled. In other words, he worked like crazy to clear the trees and slept in a flipping wagon all winter. I love this quote “he was a most useful ally, but realizing that the advantages of prairie land were much greater than of those the former, moved out to the prairies during the summer of 1829. ” I think he hated cutting down trees and sleeping with men and said, “I am out of here!” Joshua Brown’s first wife was Hannah Russel. She died in 1855.

Finally, a photograph! According to Aunt Alice this is one Albert’s brothers with their Grandfather. 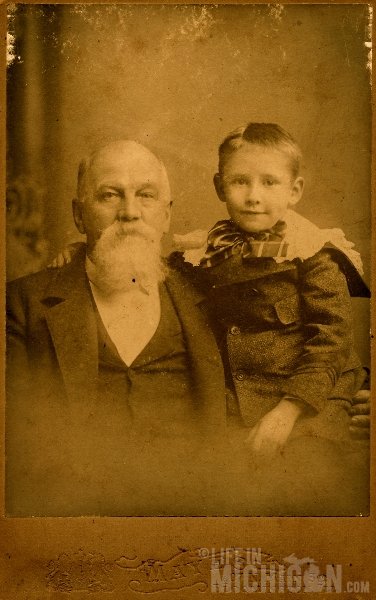 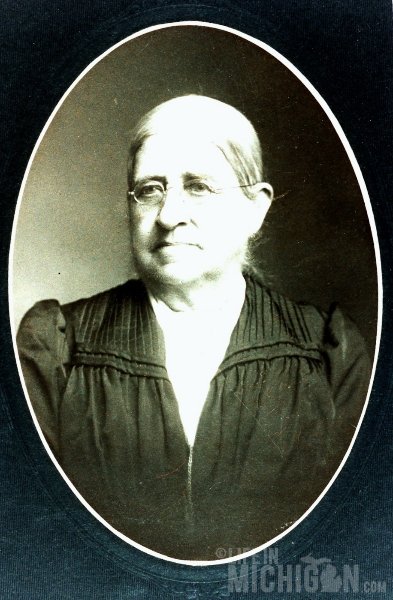 And did I mention that Joshua was extremely wealthy? He managed to purchase 1600 acres of farm land. They had two houses, one in town where Julia lived with the girls and another on the farm.  They had four children: Allen, Milner, Charles and Susan. (And yes there is a Charlie Brown in there!)

Aunt Alice said, “Milner Brown is the large man on the right.” 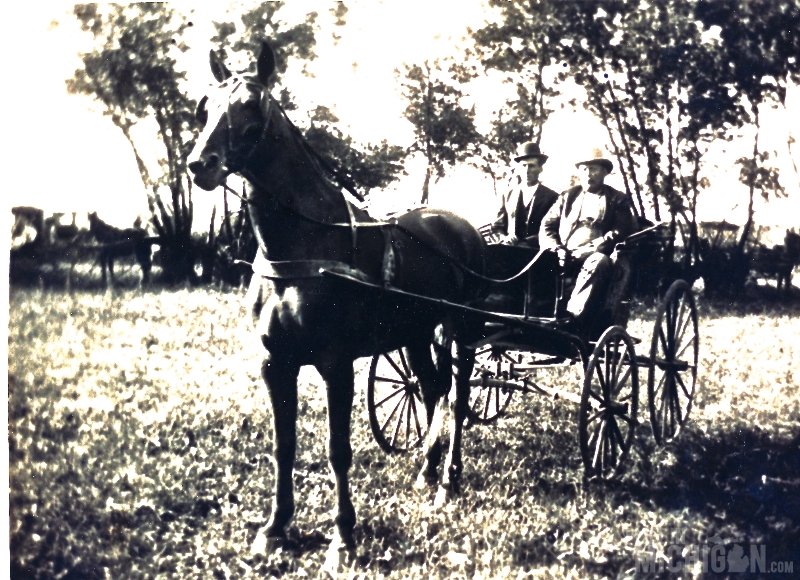 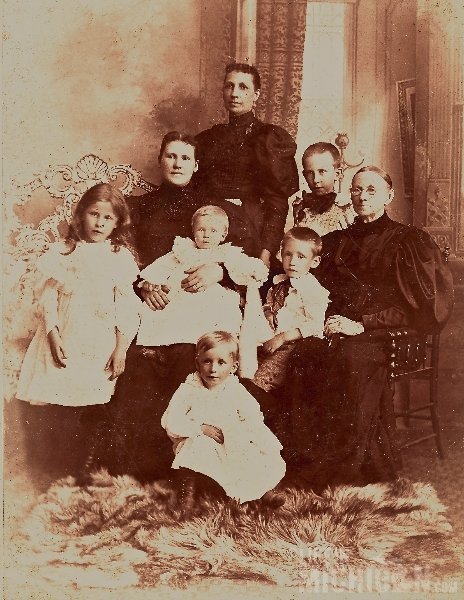 Children: Norvile Dixon, Julia, Albert, Milner and Edgar.  I am assuming the Martha Devore is holding Edgar. On the back of the photo it indicates Grandmother Devore and Aunt Em. Grandmother Devore was married to William Andrew Dixon and that is another story!

And they had four children: Thomas, Milner, William and Elizabeth. 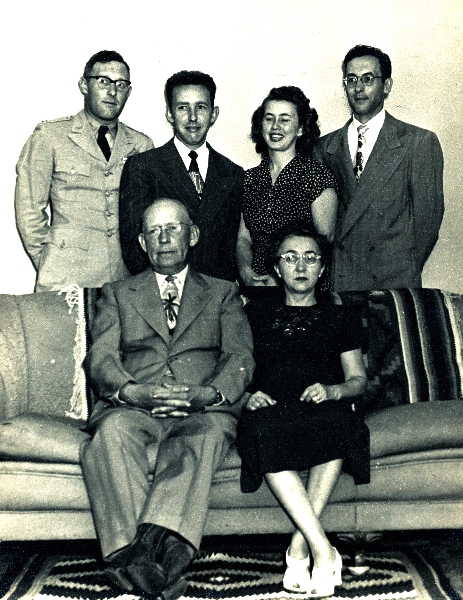