The opening for the GIG: The Art of Michigan Music was on Friday, January 15, 2016, at the Ann Arbor Art Center in Ann Arbor, Michigan. Chuck was on a mission when he designed it. He wanted to spotlight the artists behind the music scene and also give patrons the immersive experience of the diverse Michigan music scene from promotion to performance. 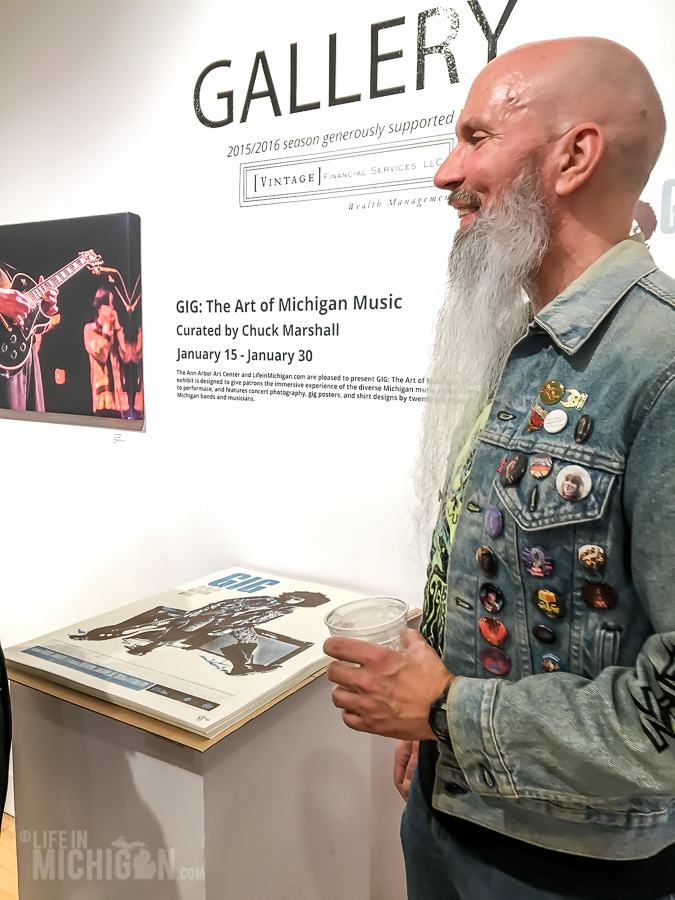 I think he accomplished both goals. Artists and patrons were in high spirits despite the rain on Friday night. The studio on the second floor of the Ann Arbor Art Center was filled with laughter and smiling faces during the entire event. One artist said, “You all know how to make a fellow feel special. And thanks to Chuck Marshall for including me and curating such an epic collection of artists. You are all amazing people and I’m very lucky and humbled to show with such a fantastic group of creatives.”

And the best part, artwork was sold and new friendships were started.

If you missed the opening, the exhibit continues until January 30, 2016. (Sorry, no music or beer, but you’ll still have a great experience!)

The exhibit features concert photography, gig posters, and shirt designs by seventeen Michigan artists of Michigan bands and musicians at the 117 Gallery on W. Liberty Street in Ann Arbor, Michigan 48104. 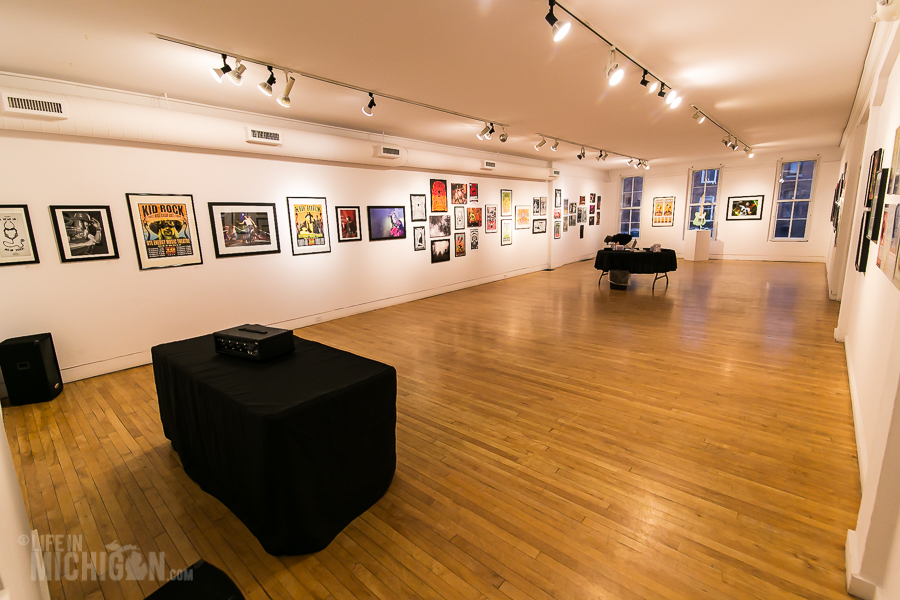 What a whirlwind! So many hands brought the GIG to life. The number of people to thank is endless. First up, is the Ann Arbor Art Center! Thank you for being open to the concept and a huge shout out to Megan and Rebecca for your help. Who knew it could be so complicated to hang over 100 pieces of artwork! During an initial meeting with the Ann Arbor Art Center they asked, “Have you ever curated an exhibit before?” Chuck shook his head no and gave them a reassuring grin. Now I understand why they were asking and the ever so slight look of concern.

We also need to give a special thank you to Robert ‘Nix” Nixon for this outstanding artwork that branded the show. 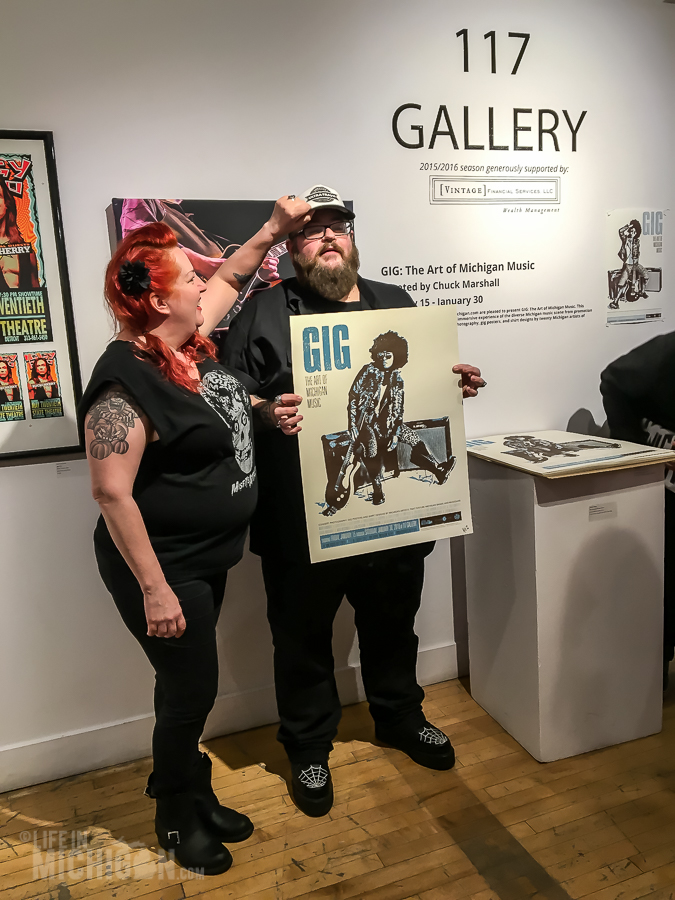 And a thank you to Jeremy Wheeler for pulling double duty spinning awesome tunes for the opening. 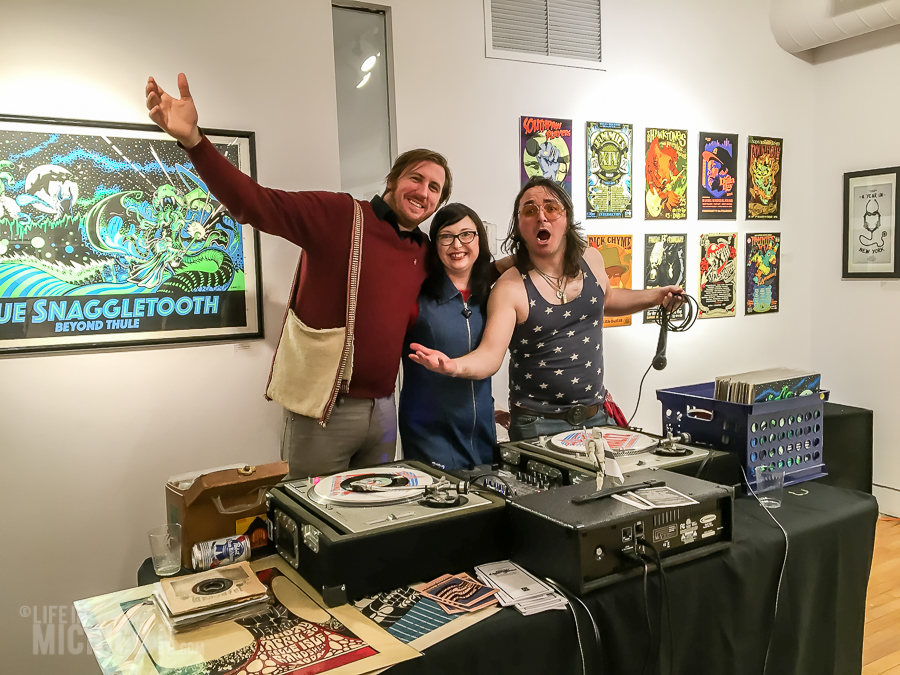 Huge thank you to all the artists for agreeing to be in this exhibit.

Many thanks to Dark Horse Brewing Co for the first two kegs of beer, the Beer Grotto for coming to our rescue when we ran out of beer and brought a back-up keg, and to Avery for making the PBR run.

I can’t say enough how much we appreciate the great coverage we had for the event: Howie Herula and Rachel May invited Chuck into the studio to chat about GIG on their show, Hard Edge Radio. Hip In Detroit gave us lots of love on their blog and Facebook page! Lee DeVito wrote many lovely words about the show in an article in the Metro Times,”GIG show pays respect to the visual artist who bring Michigan Music to life.” Rob St. Mary’s interviewed Chuck for the DeTours podcast for Detroit Free Press. I fell in love with the artwork Robert ‘Nix’ Nixon created for the GIG posters. It is a good thing too, as Chuck and I spent hours distributing flyers all over Southeastern Michigan. And eCurrent gave us a mention on their calendar.

The Story – The Making of GIG

The event started with a flyer from an opening for a show Jeremy Wheeler curated last summer at the Ann Arbor Art Center. I handed it to Chuck and said, “You should curate an event that celebrates the Michigan Artists who promote and support the music scene in Michigan.” He took the flyer, and carefully placed it on the corner of his desk. Six months later we were standing in an empty room at the Ann Arbor Art Center with over 100 pieces art to sort and hang. 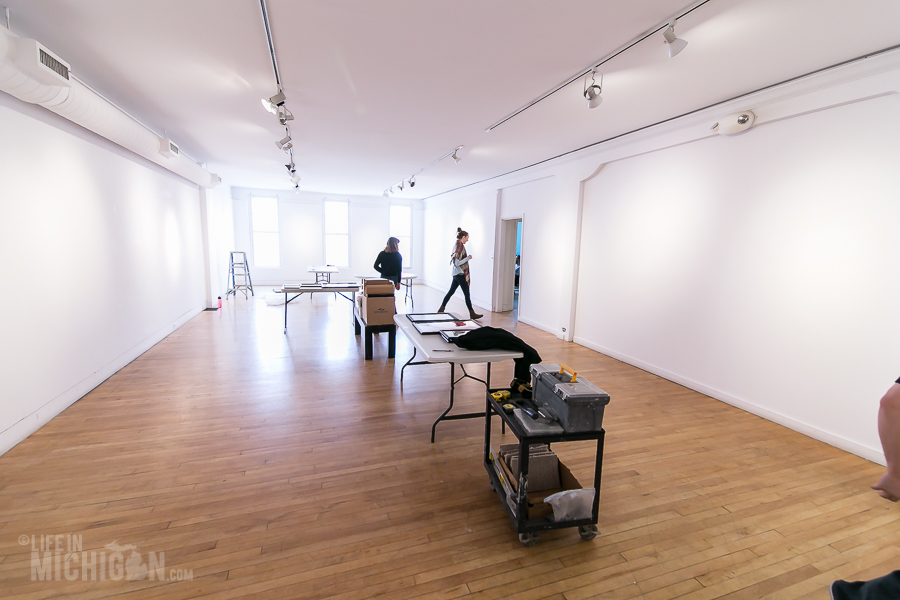 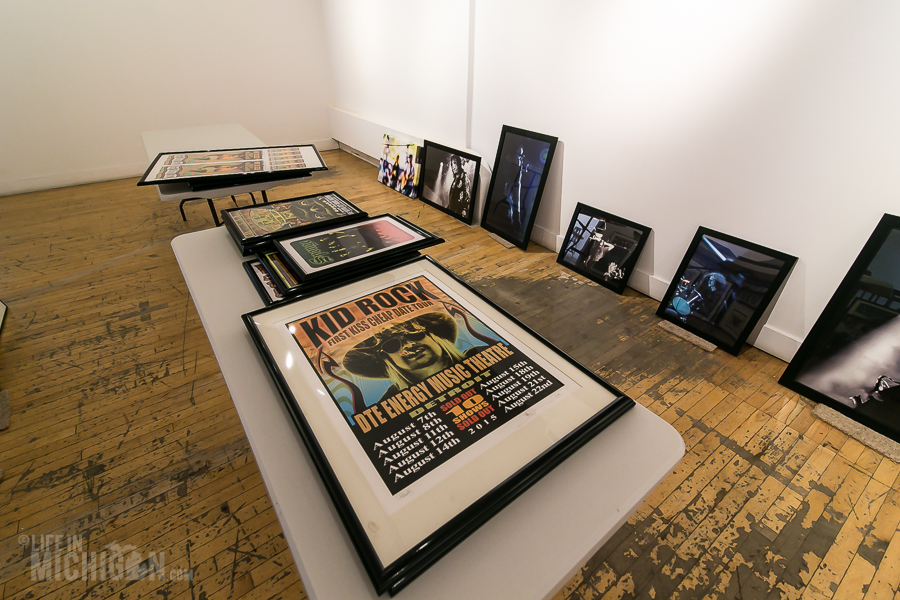 As luck would have it, the Ann Arbor Art Center provides plenty of help! Meghan and Rebecca were an absolute godsend. They provided lots of advice, instruction and TLC during the entire process. 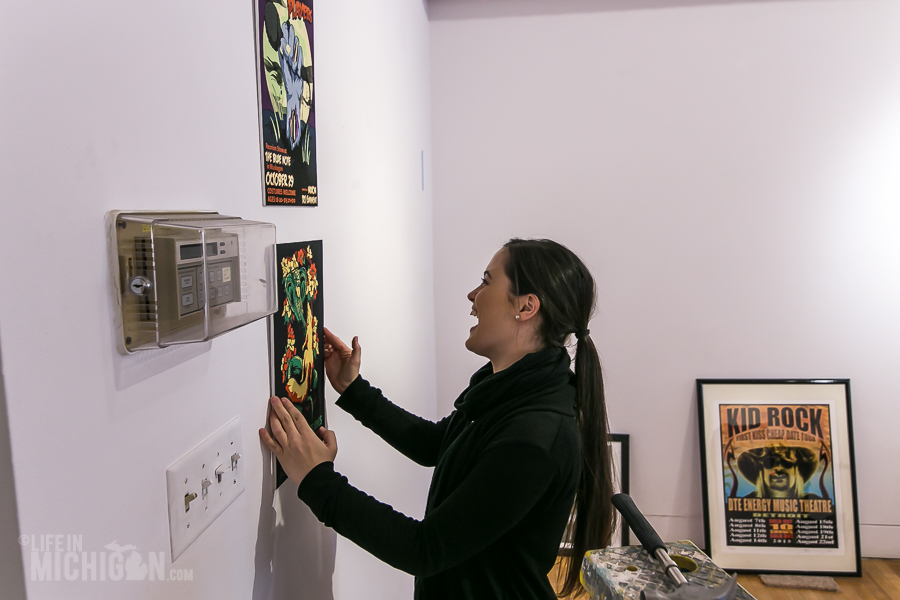 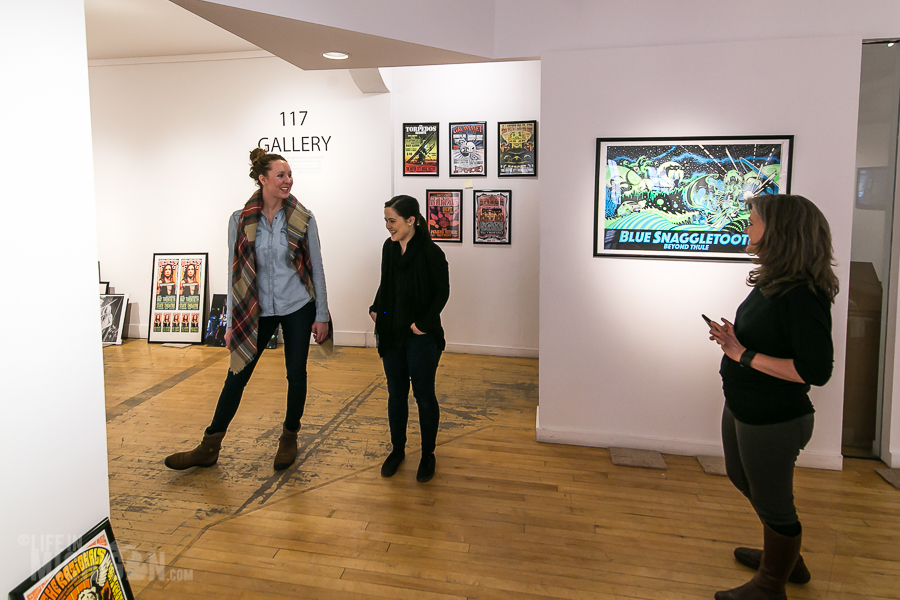 A few days prior to the opening we got a crash course on using the “jockey box” from Dark Horse Brewing‘s Chris Lasher. 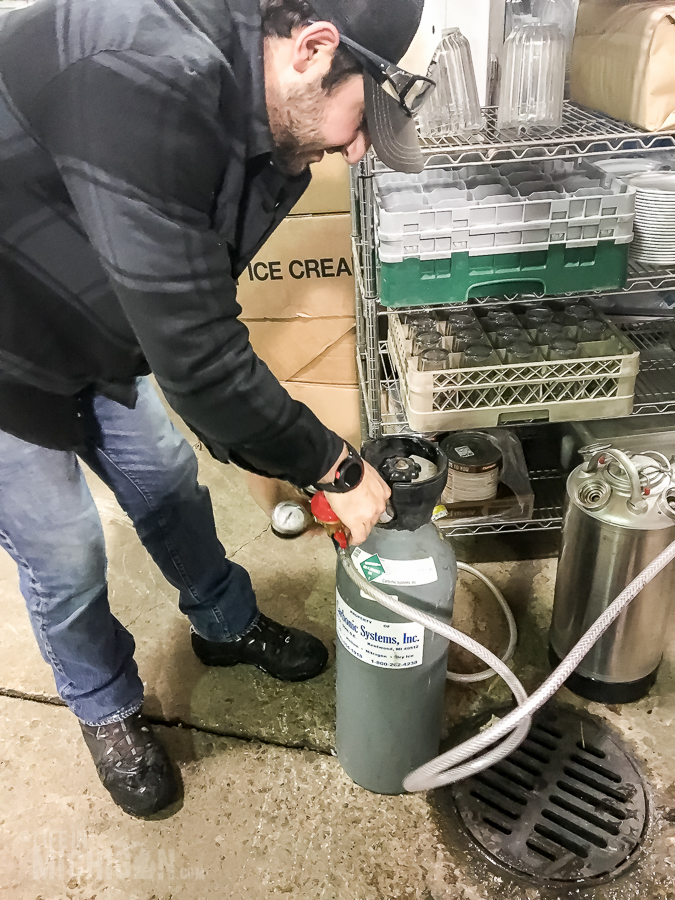 Because we didn’t have enough to do, Chuck was interviewed on Hard Edge Radio the day before the opening. (Thank you for the interview, it was amazing!) 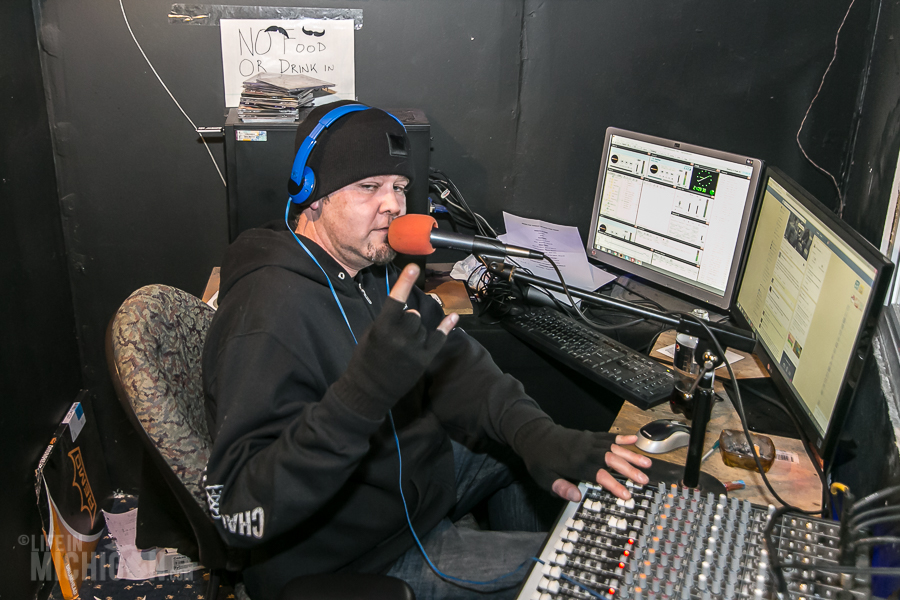 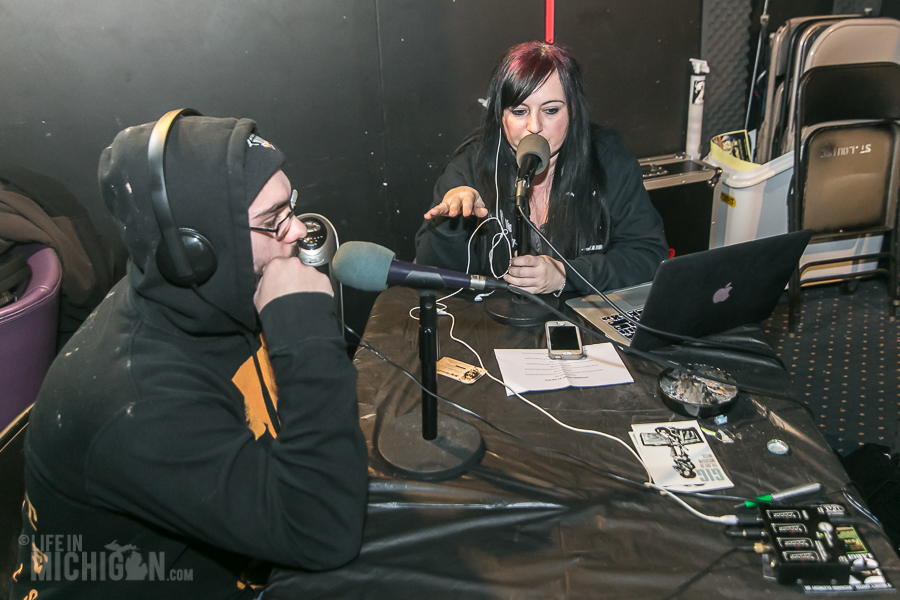 Curating an event is very much like throwing a dinner party. There are a thousand details and at some point you need to stop obsessing over the details. Tapping the beer is not one of the details you should forget. 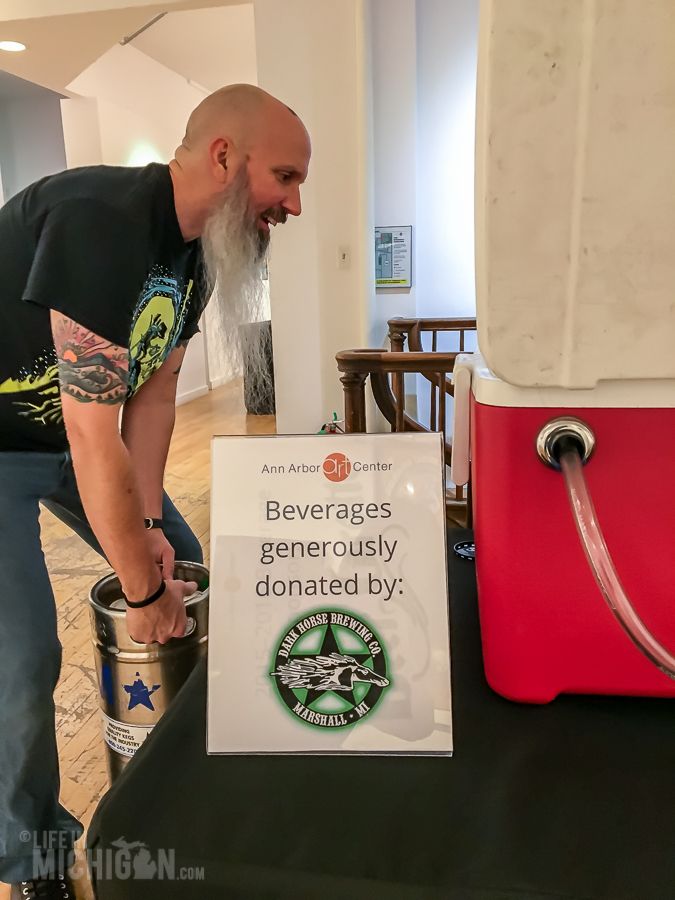 Chris sent Chuck a message to be sure the beer was pouring. As you can see Chuck was a bit anxious and perhaps had sampled too much of the beer. Or putting out food that was generously donated by Afternoon Delight. 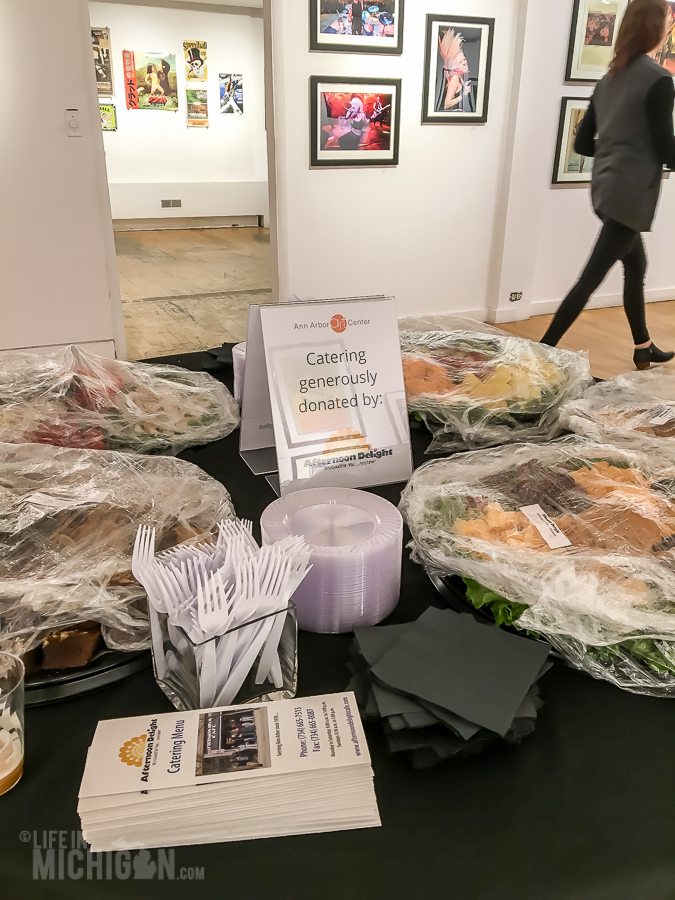 Jeremy Wheeler arrived right on time with his equipment and records. Richie helped him spin the tunes! The music certainly set the mood and added to the magic. 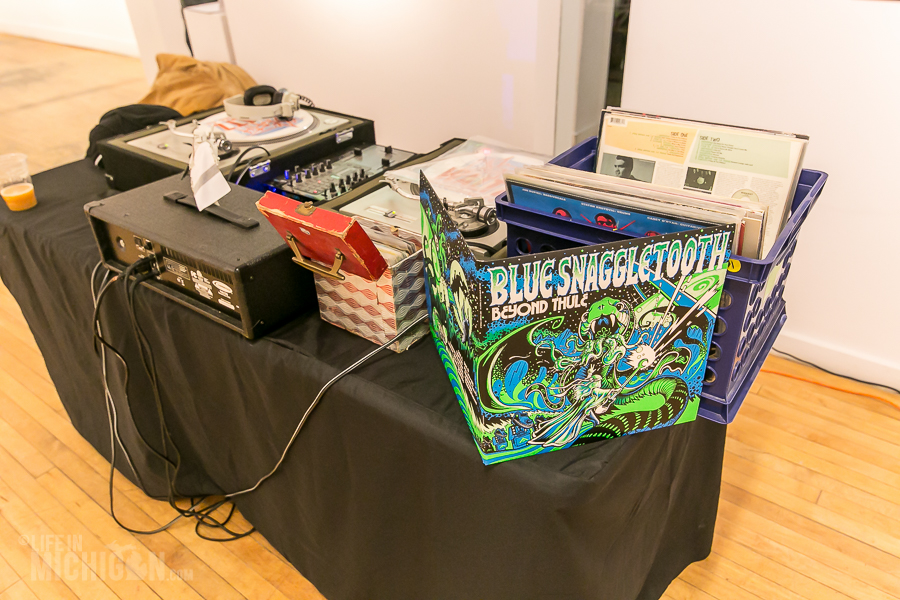 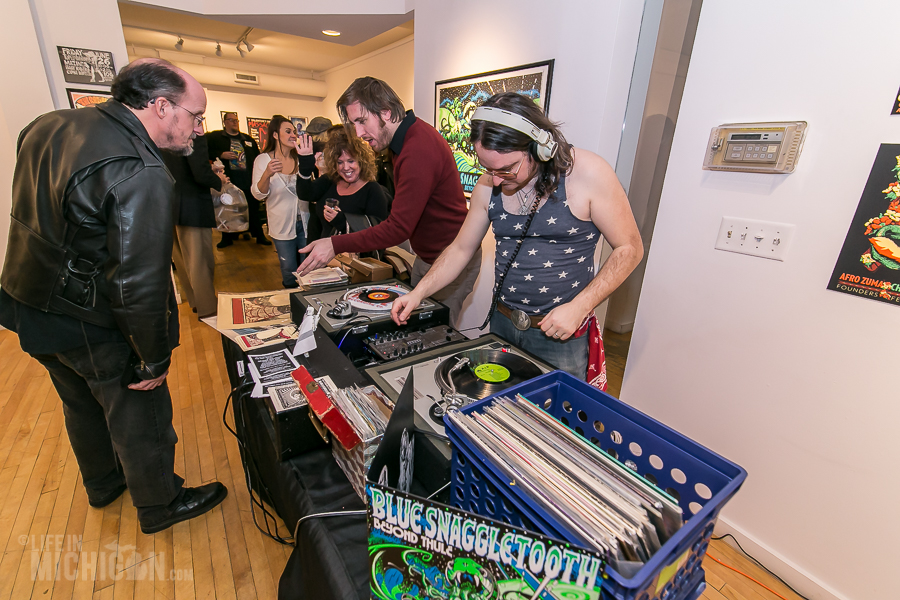 The turnout for the opening exceeded all our expectations. 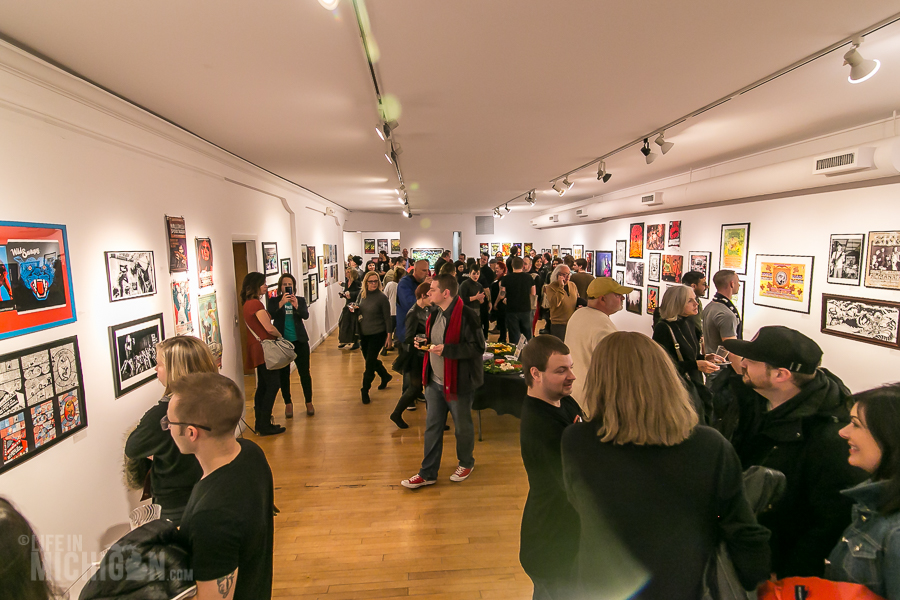 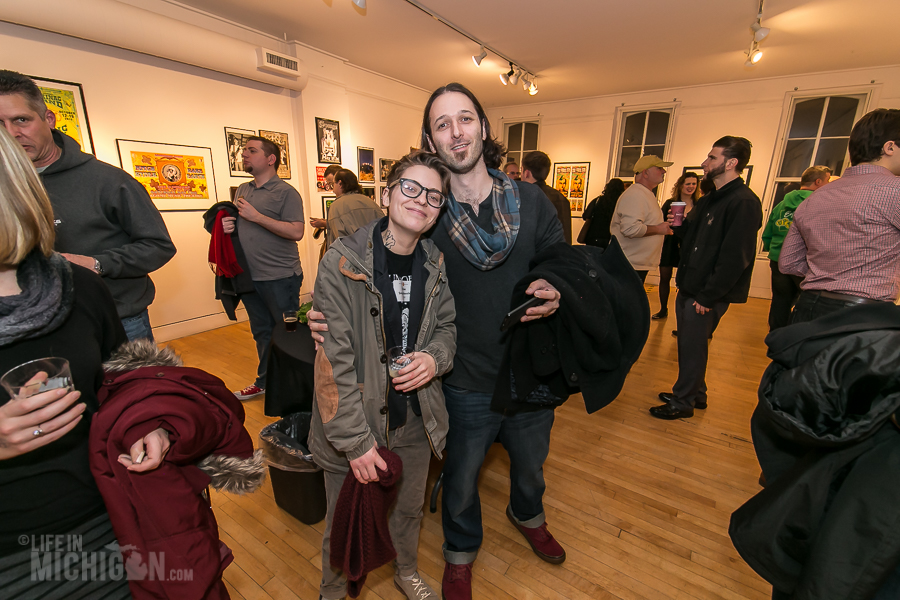 (Chloe Songalewski with A.J. from Nina and the Buffalo Riders) 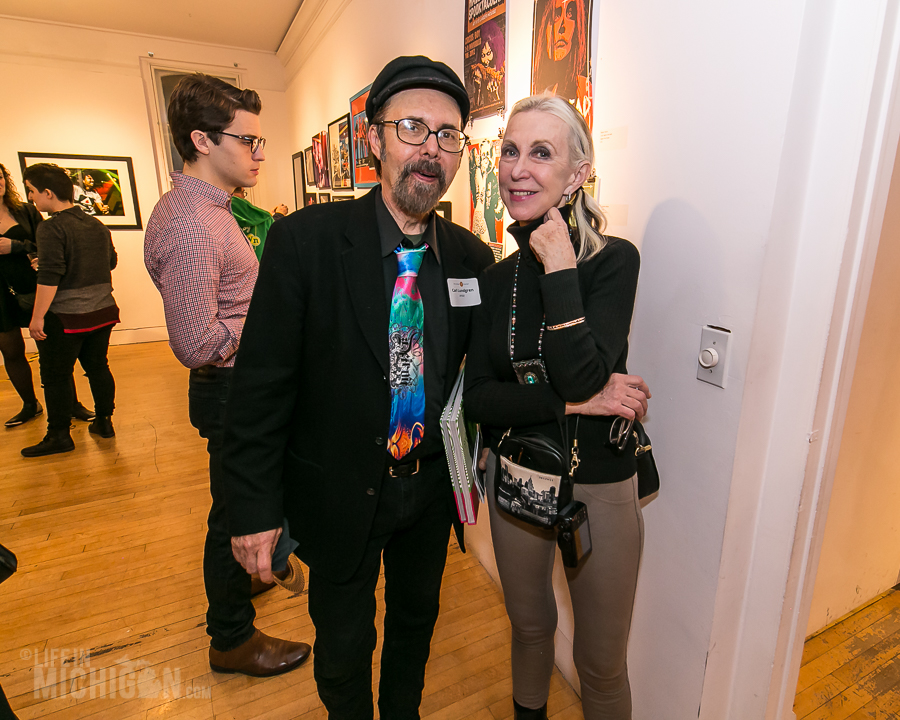 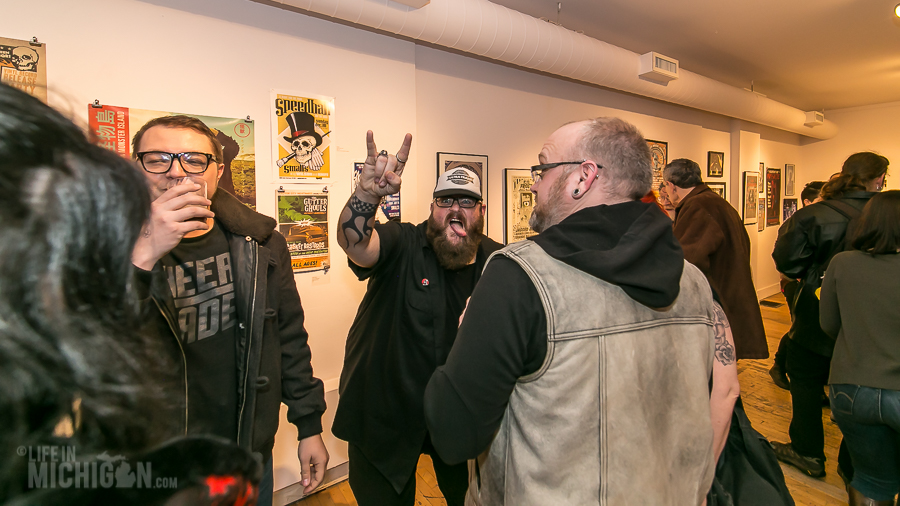 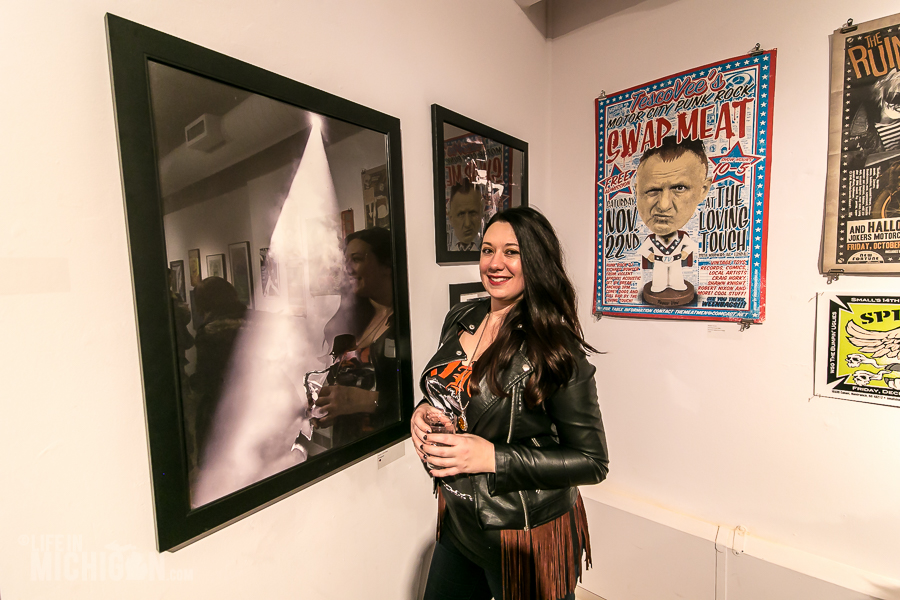 (Jena McShane with one of her great photographs) 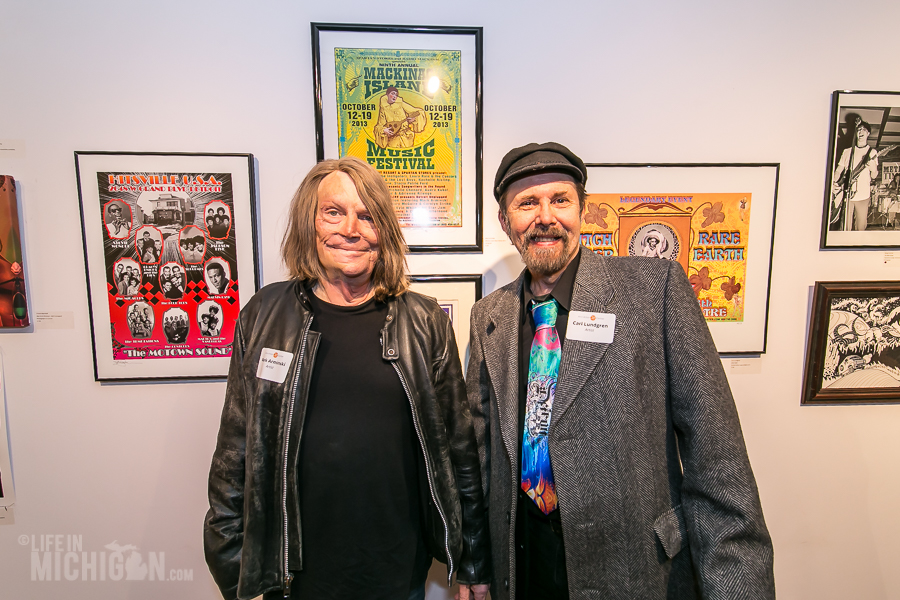 (Mark Arminski and Carl Lundgren by their artwork)

It was fitting we ended the evening with breakfast at the Fleetwood Diner. 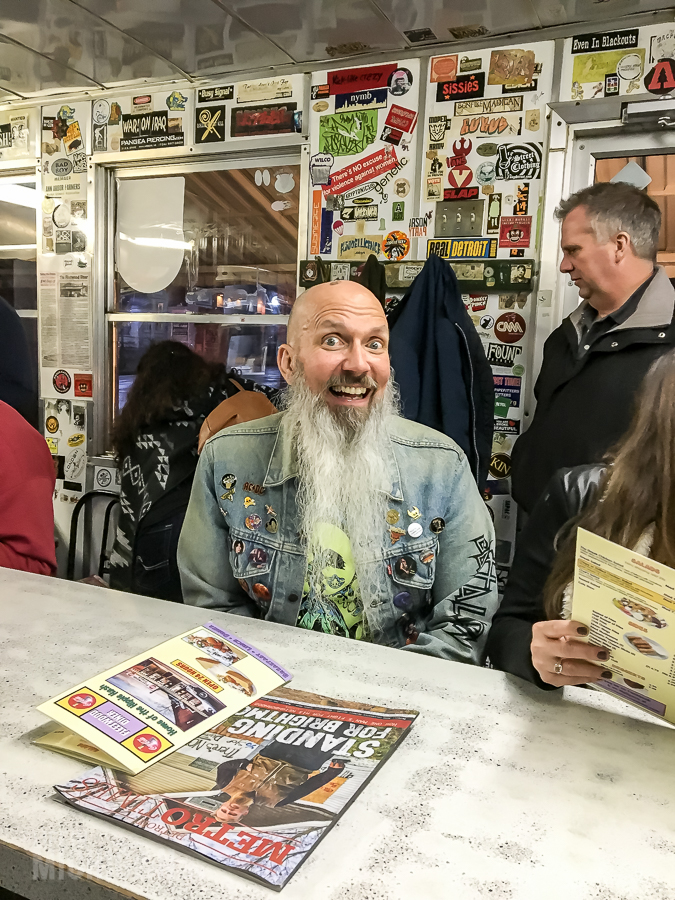 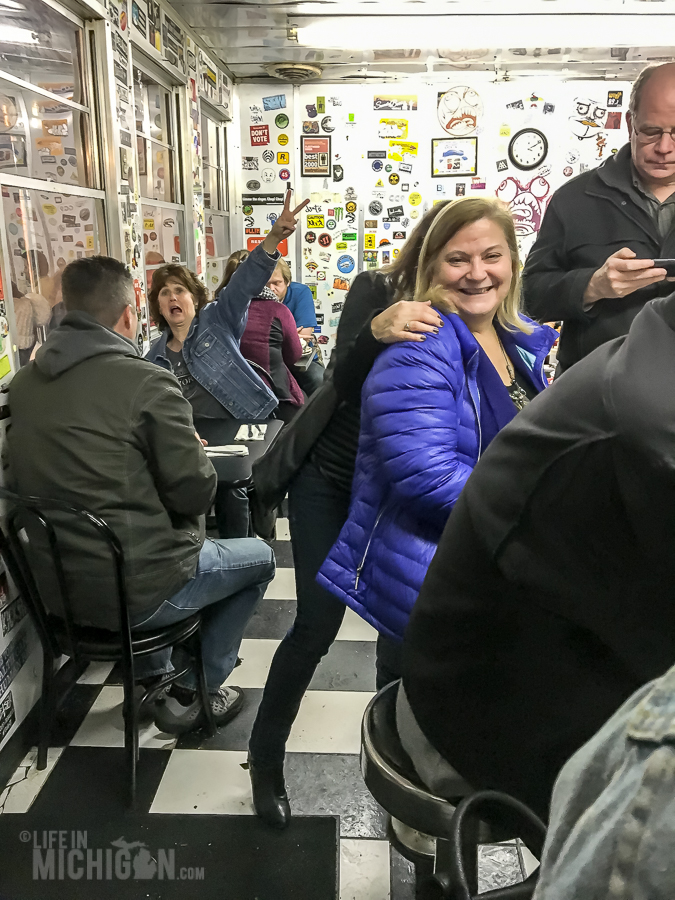 Patrick Dunn posted a review of the exhibit on Pulp at the Ann Arbor Library website. He said some very nice things too. Thank you!

The show is cleverly laid out in that it groups works not by artist but by theme, subject matter, and color scheme. There are few enough artists in GIG that each could easily be segregated into their own little stretch of wall. But it’s more interesting to take in a wall of Alice Cooper- or Kid Rock-related art, more interesting to explore a section of comic book-inspired illustrations for bands. There’s a pleasant surprise in realizing a group of works are related not necessarily by their creators, but by aesthetic qualities–sometimes different takes on the same subject material.

We have many more pictures in our gallery.

Help us spread the news and promote the GIG: The Art of Michigan Music by sharing this post in your favorite social media venue or sending it as a link to your friends and family.