Our 2013 U.S. National Park Tour started with 3 glorious days hiking along the North Rim of the Grand Canyon, the first of three National Parks we visited in Arizona and Utah. We also hiked the HooDoos in Bryce Canyon and spent one day in Zion before the Government Shutdown. 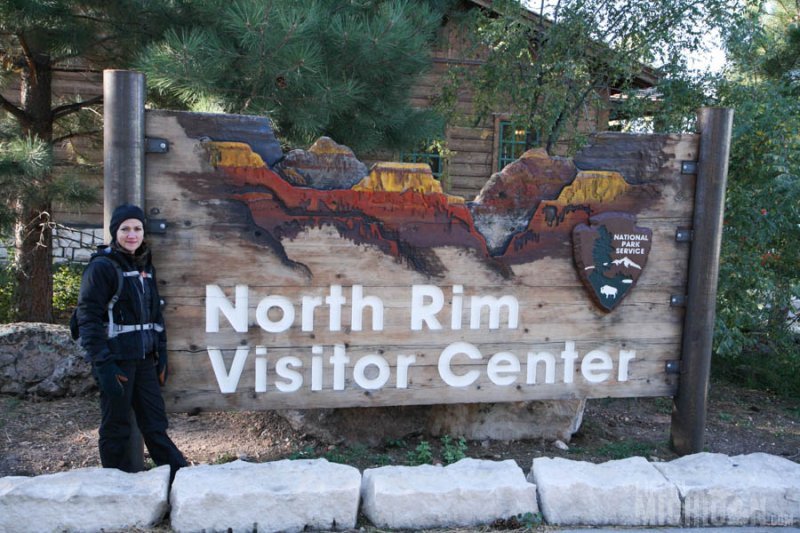 Chuck and I traveled from Michigan to Las Vegas with Jeff and Angie. We are very lucky to have friends that are willing to spend 10 full days with us. Spending the weekend drinking beer together is one thing but traveling across the country and spending 10 days hiking is another story. Our hiking adventure wasn’t as challenging as the Amazing Race but I’m sure Angie would disagree. 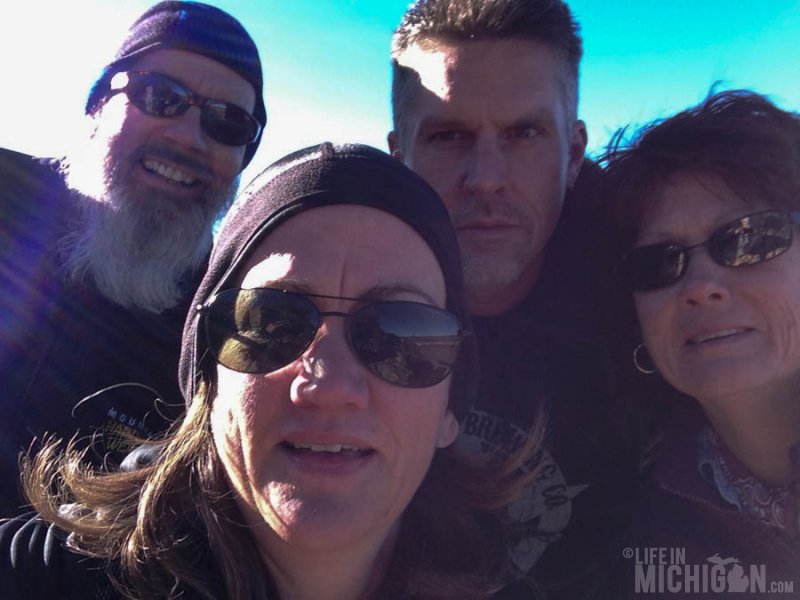 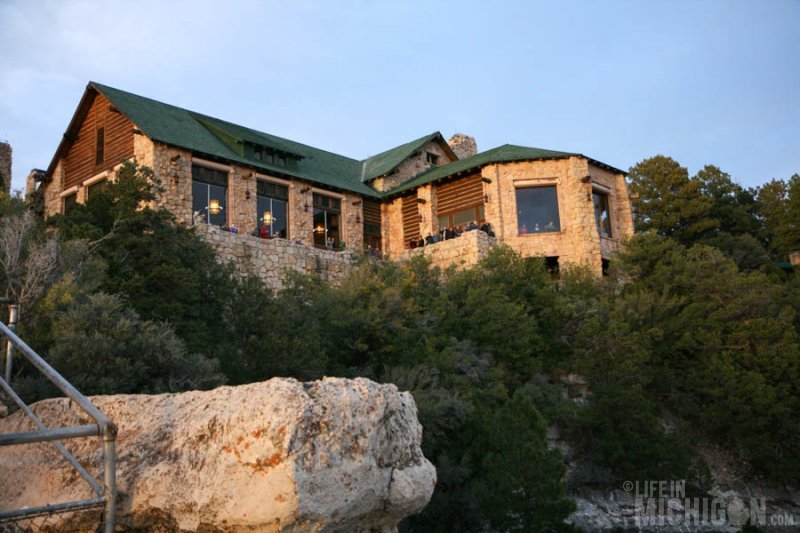 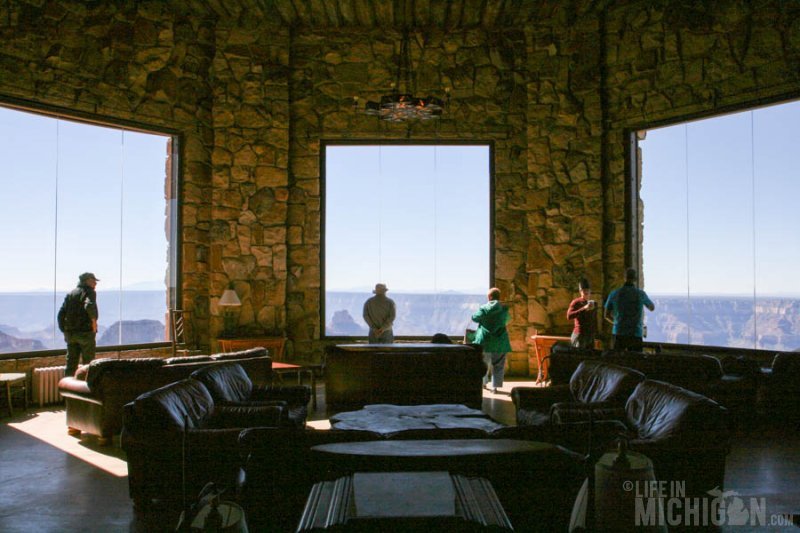 We gathered at the lodge on several occasions and met many other travelers from all over the world — all willing to share their stories. You could sit inside or out. It was super windy during our visit so sitting inside was a nice escape from the wind. On our last day, the sun was warm and the wind had stopped so we enjoyed our Lumberyard IPA on the deck. 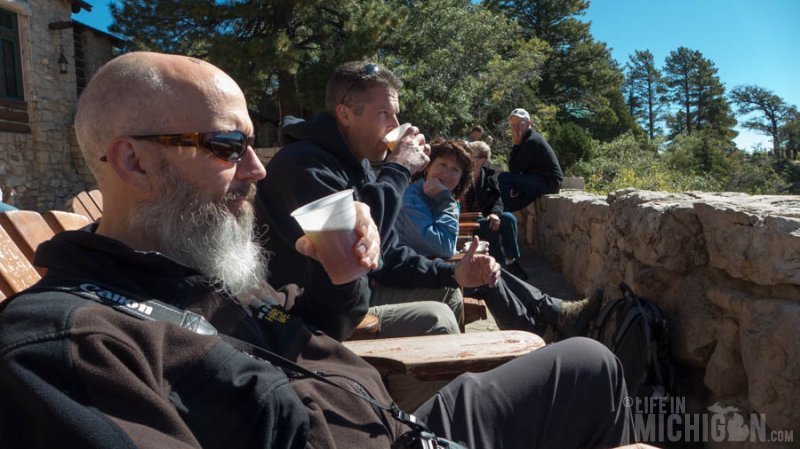 For our last night on the North Rim of the Grand Canyon, we had a room at the Jacob Lake Inn. It was very nice but a bit of a drive from the trailheads. I almost forgot, Jacob Lake Inn has the BEST baked goods. OMG. Fantastic cookies and the food in the diner is good too with a number of vegetarian options.

Our plan was to wake up an hour before dawn so we could hike the .25 mile Bright Angel Point Trail to see the sunrise. The trail begins at the lodge back porch and winds itself into the canyon. The view is spectacular! Our room wasn’t far from the trail head. Headlamps would have been handy. It was super windy and cold. I immediately regretted not wearing my long underwear. We realized not long after arriving at the point that we’d not set our watches correctly the night before. We had two hours to wait for sunrise. We had our choice of places to sit. 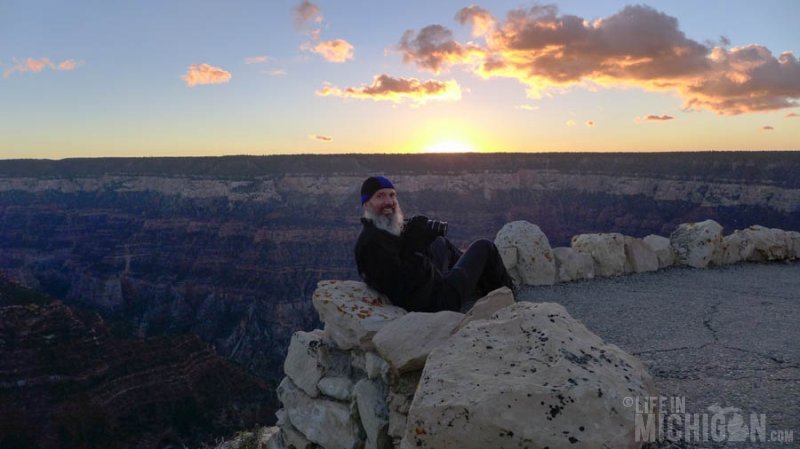 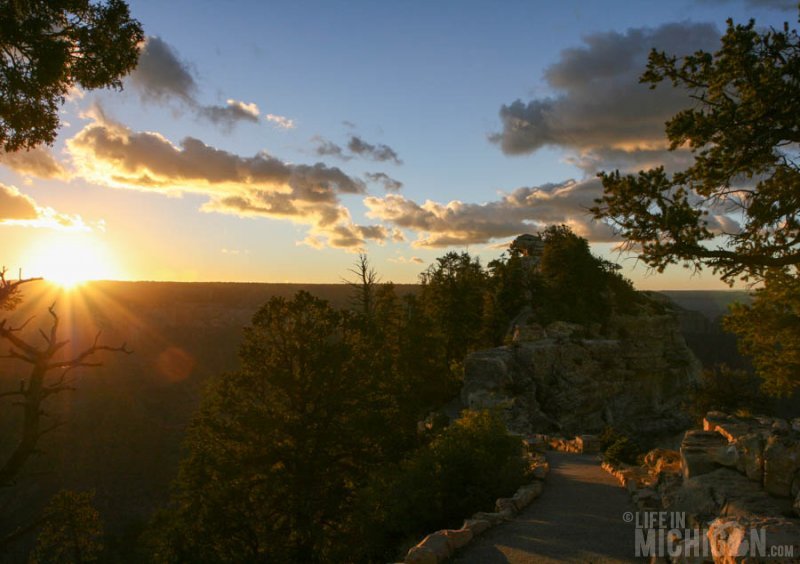 It was painful picking the photos for the blog, there were so many. We have more beautiful pictures of the sunrise in our gallery. Chuck nearly tumbled into the canyon getting the perfect shot. My heart stopped when the wind nearly blew him away. 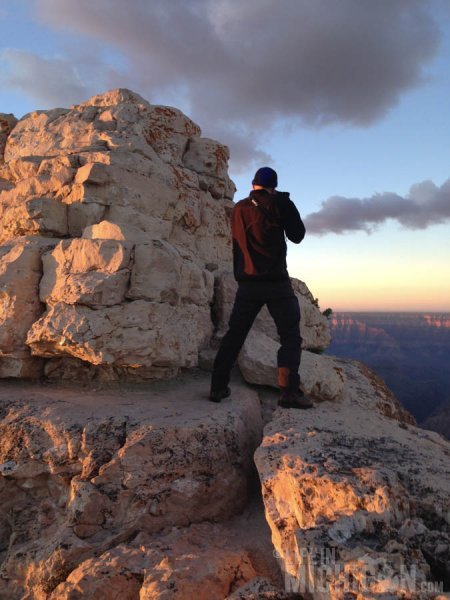 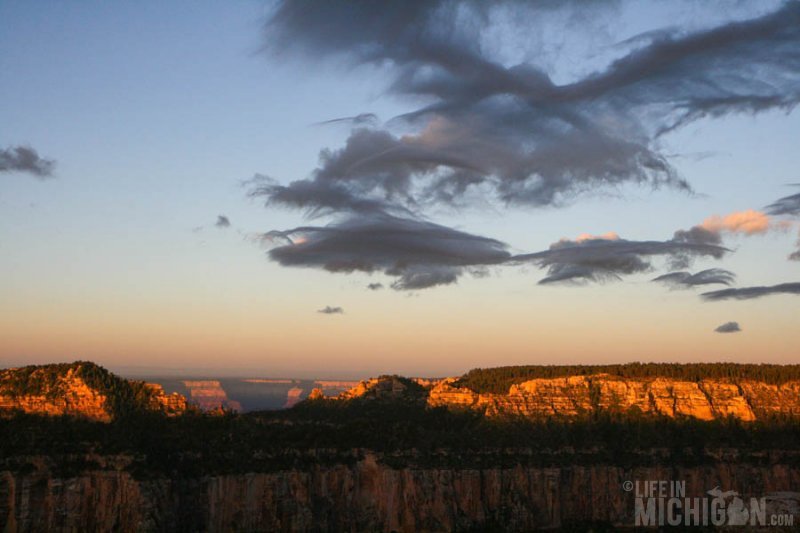 We joined Jeff and Angie for breakfast after sunrise and shared the details of adventure with them. They we were immediately jealous. Well that may be an overstatement but they wanted to see the sunrise the next morning. We set our watches correctly so it was a bit more crowded when we arrived. I was also appropriately dressed! We met several women traveling from Wales, Great Britian on the second morning. They were leaving the North Rim after sunrise so they could get tickets for the lottery to hike the Wave. 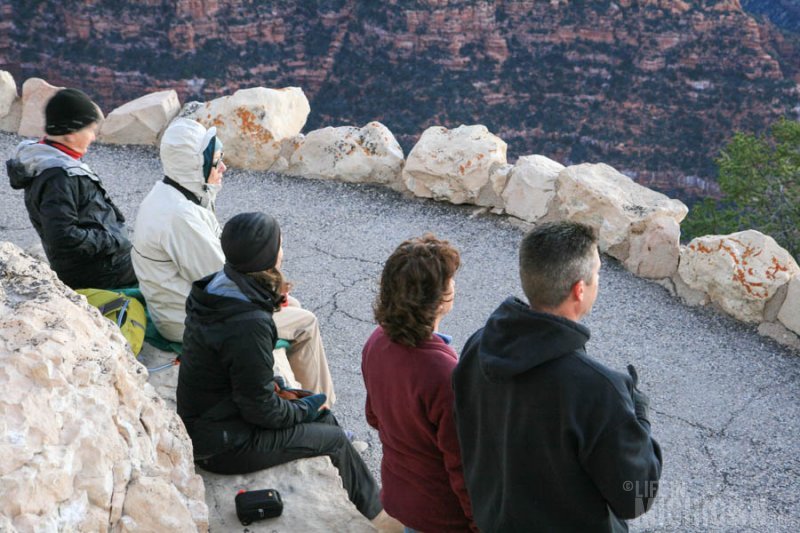 We spent most of our time hiking along the rim of the canyon, the North Kaibab Trail was our only hike below the rim. Our destination was Supai Tunnel about 2 miles into the Grand Canyon. 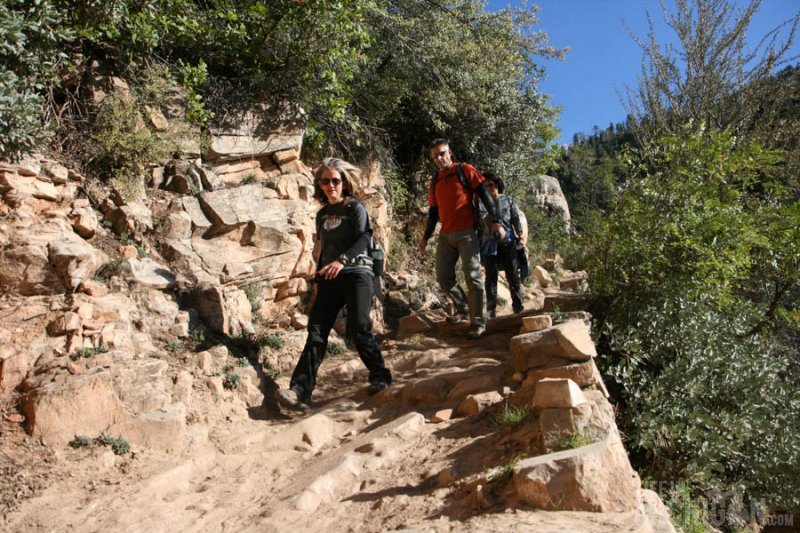 We were only .75 miles below the rim. Behind Chuck is the Roaring Springs Canyon. 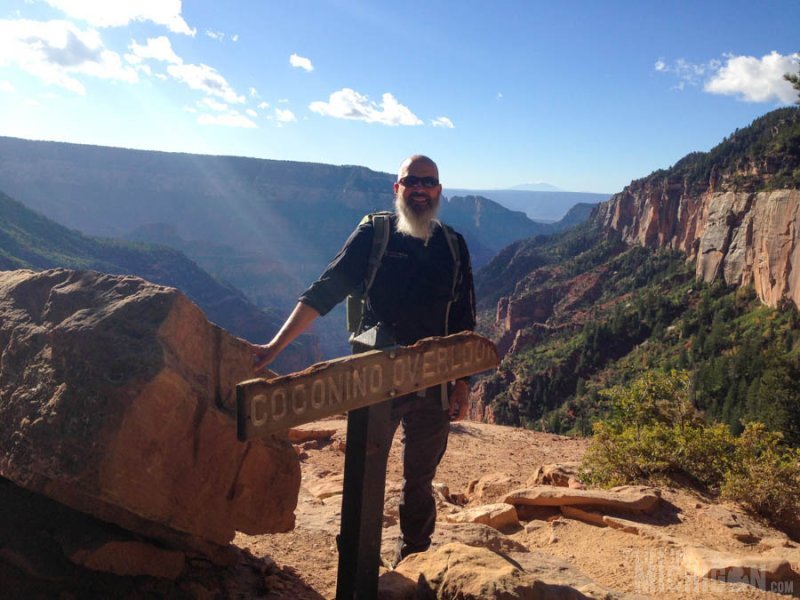 Chuck likes to scare me…I prefer to stay away from the edge. 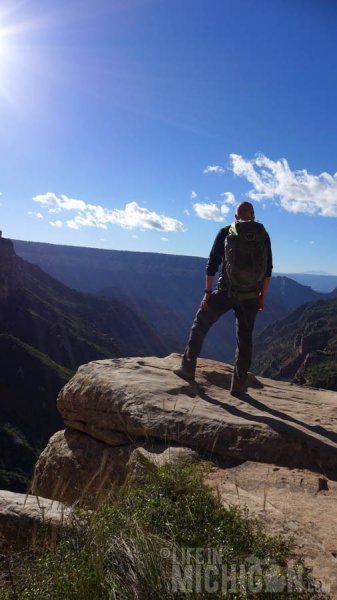 Angie did a dance through the tunnel or she just saw a spider. 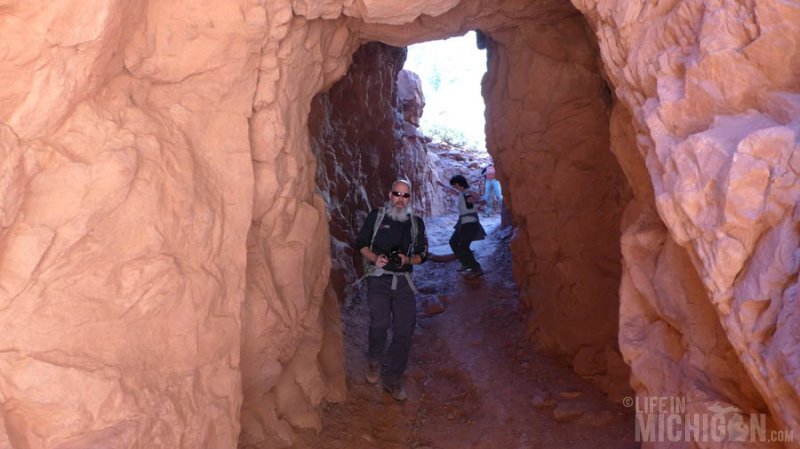 The trail continued for another 12.2 miles to the Colorado River. Many hikers use this trail to make the trip between the South and North rim. This takes several days. We talked with a few hikers who were making the hike between the rims during our stay. It sounded like fun, maybe next time. For those looking for a day trip, it is recommended to turn around at Supai Tunnel, which is what we did. 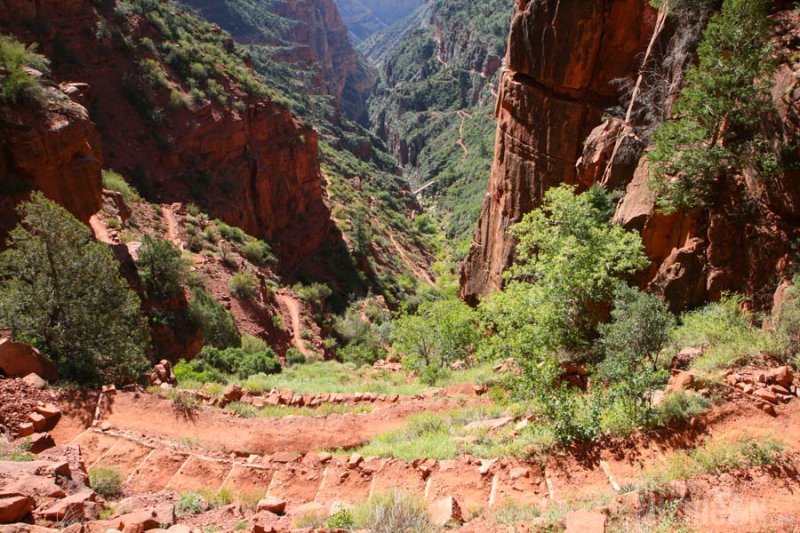 Have I mentioned that it was super windy? Our original plan was to hike the Cape Royal Trail. You can see Angels Window and the Colorado River along that trail but the road was closed. So we drove to Point Imperial. It wasn’t our first choice. The trail passes through areas burned by the 2000 Outlet Fire. I’m glad we made the trip. The view was amazing and we met a couple who just purchased a $300,000 travel trailer that had a washer machine and dryer. They were very excited about it. I was less excited but it was fun talking to them. 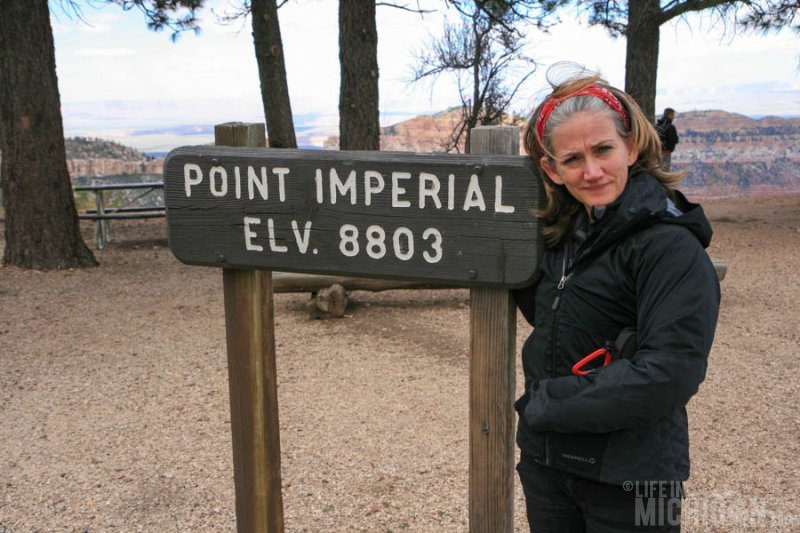 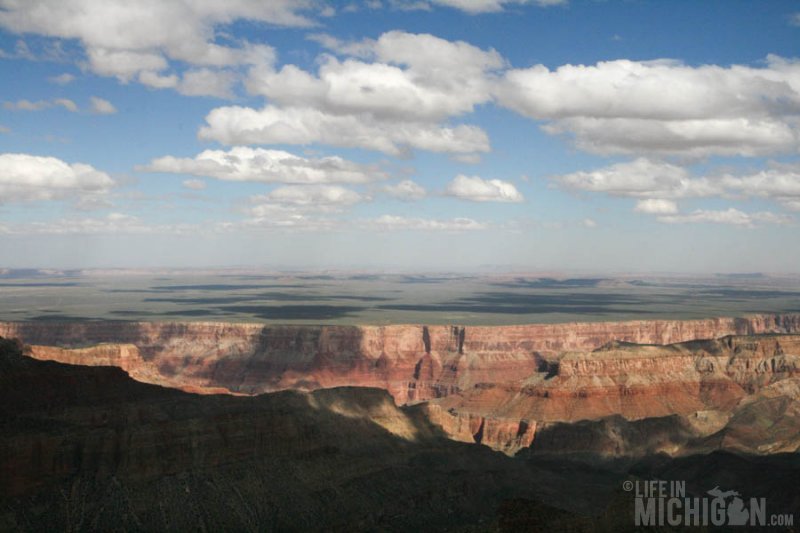 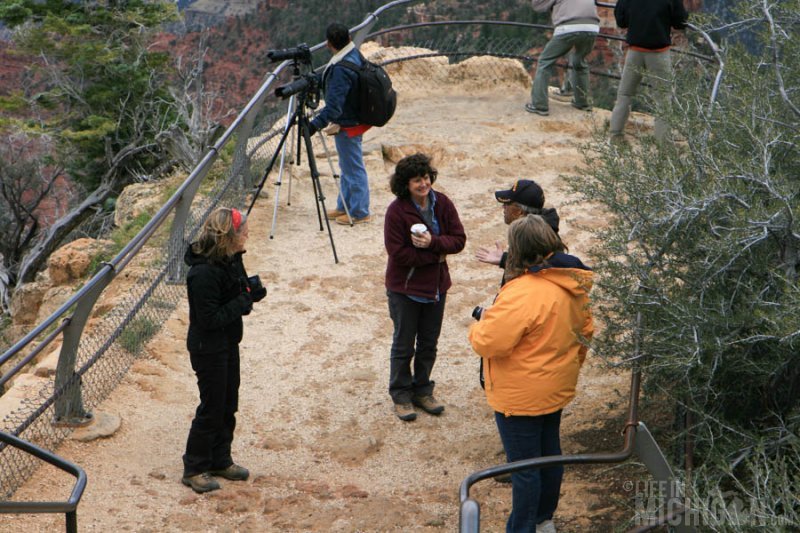 This trail follows the canyon rim from the Lodge to the campground. It is an easy hike and offers many great views of the canyon. We even saw a pair of Golden Eagles and a few deer. We were a little un-nerved by the sign providing instructions if you have a Mountain Lion encounter:  DON’T RUN! Stare it to its eyes (so remove your sunglasses) and if it attacks fight back aggressively. (No shit!) 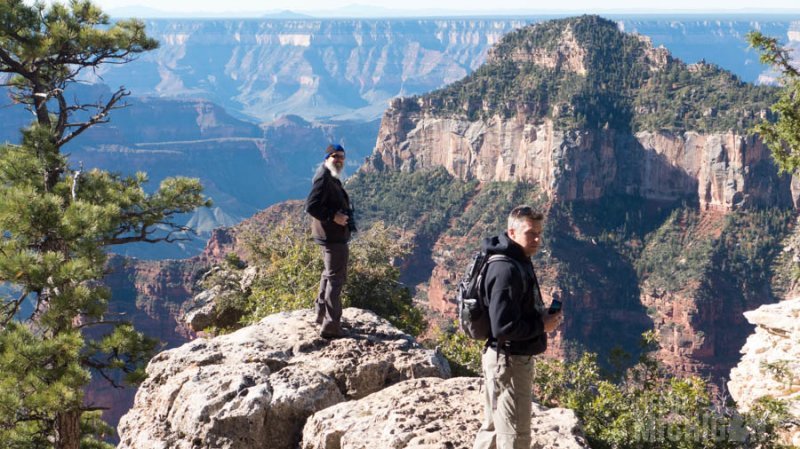 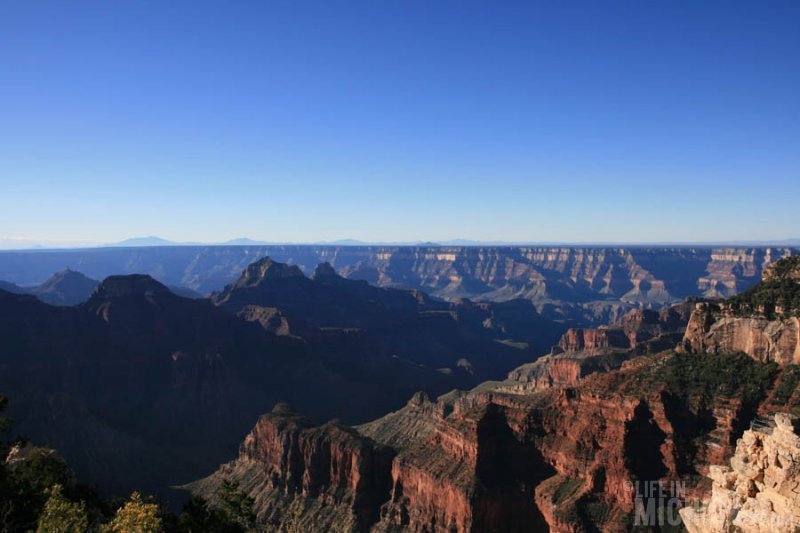 The Sunset Are Amazing 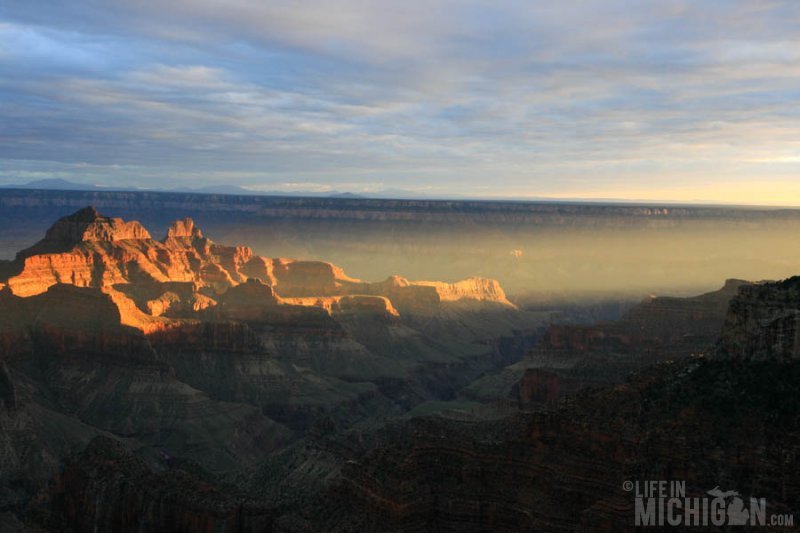 Chuck took these photos from below the lodge near the trail head for the Transept Trail. I was ensconced in a big leather chair in the lodge drinking Lumberjack IPA and talking with other travelers.

We had not one but two flat tires while visiting the North Rim of the Grand Canyon. We suspect that one of the tires had issues before we left Las Vegas. We stopped at the General Store just outside the entrance and they fixed the tire in about 10 minutes for $15. Apparently flat tires on rental cars is a common occurrence for them. The second one we may have caused. We took a tour of the National Forest near Jacob Lake Inn. The road was a little rough but not crazy. We were lucky, the flat happened about a mile from the gas station. They were a bit short staffed at the station so Jeff and Chuck were charged with fixing the flat. This took a lot longer than 10 minutes. 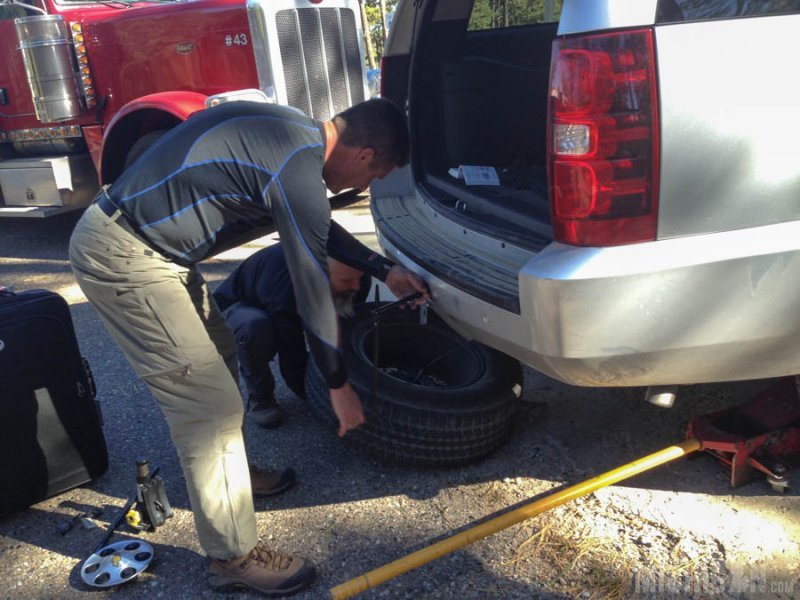 Creative paint jobs on cars and vans appears to be all the rage out West. This was not the first or last crazy paint job we saw. 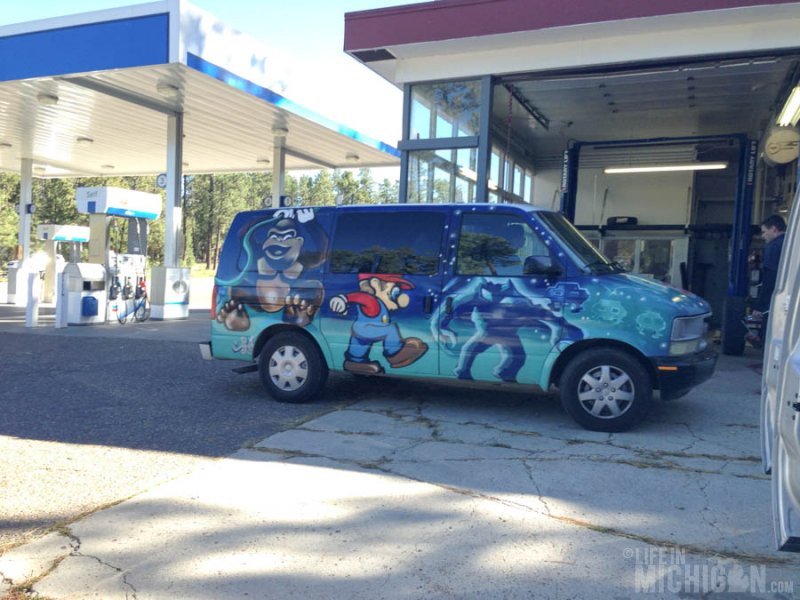 Look for more posts from 2013 National Park Tour and if you enjoyed these pictures there are more in the gallery.