Way More Than Another Beer Fest!

We recently made a pilgrimage to Michigan’s fantastic Upper Peninsula. Our pilgrimage was in search of great Michigan beer. We found it at the Michigan Brewer’s Guild 5th Annual U.P. Beer Festival in Marquette, Michigan.  Our pilgrimage first took us out to the Keweenaw peninsula to visit Houghton, Hancock, Calumet, Eagle River (and the fantastic Eagle River Inn!!), and Copper Harbor.  More stories on our side trip soon to follow 🙂 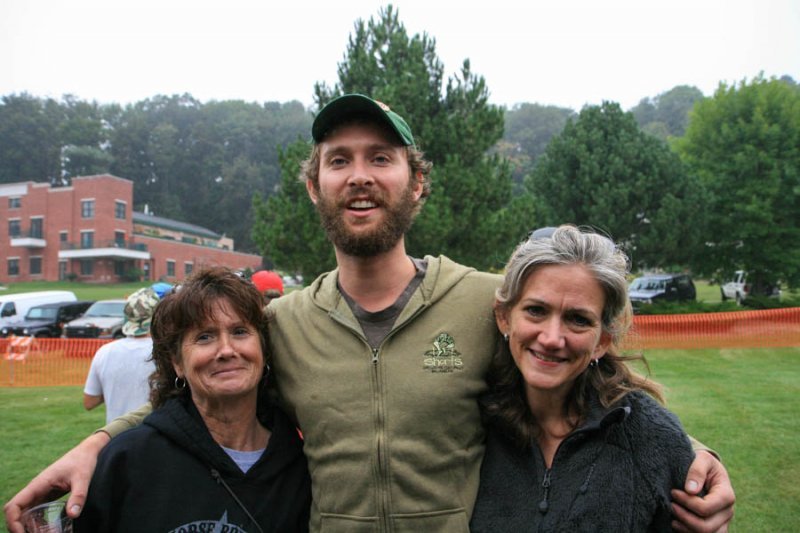 While every guild festival has its own special charm, the beauty of the U.P. Beer Festival is that it feels like a family reunion (but without the stress or the family!). It is an opportunity to check-in with old friends and make new ones. There is the added bonus that some of our friends make the delicious beers. Like the crazy Andy Reeves from Blackrocks, who likes to eat muskrat heads. (He demonstrated this for us during the 4-Elf Party at Dark Horse in 2012.) He always provides a proper U.P. greeting when you see him!  Oh…were  you wondering about the beers from Blackrocks?  The Lazer Wolf Doom Hammer Spruce Tip Imperial IPA (wow…that’s a name!) was great!  We all especially liked the Big DIPA Imperial IPA joint brew with The Vierling. 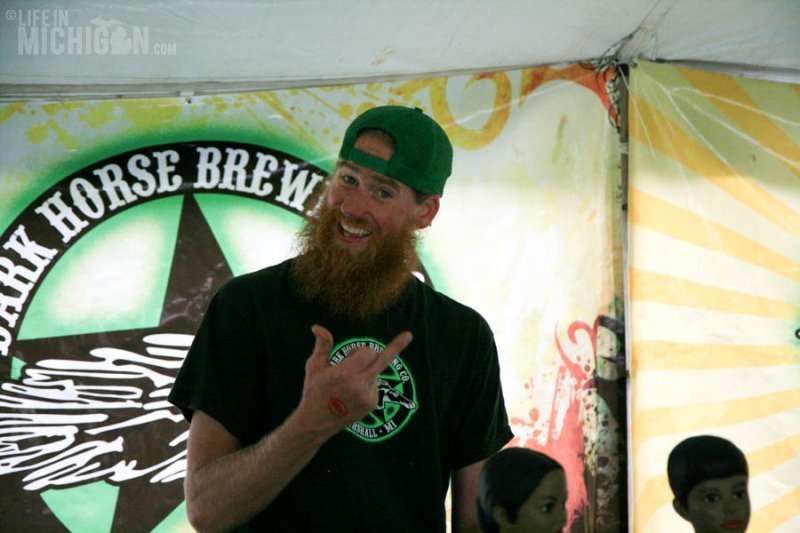 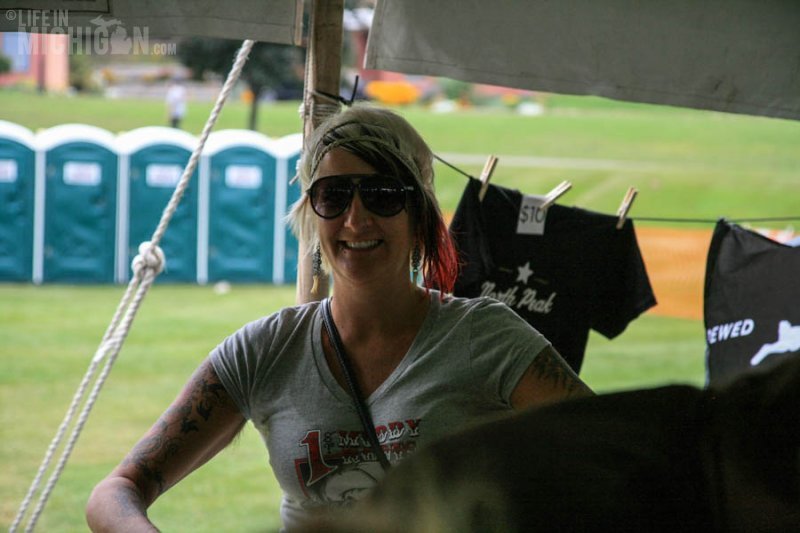 Then there are our brothers and sisters from Dark Horse Brewing — Wiggs, Kristy, and Joanna. They greet you with a smile and are happy to have a beer with you and shoot the breeze  — another reason why we love Dark Horse so much. We are proud members of the Nation! We got a special bonus treat this year — we got to chat up Aaron’s dad, Wacky.  Super cool guy!  Did you want to hear about their beers too? Well, it was all gold Jerry! The Flat Sammich Malt Liquor was creamy, a bit sweet, and delightful.  This year’s Oktoberfest is fantastic.  Top Fuel bourbon barrel barley wine is, well, Top Fuel!  BAM! 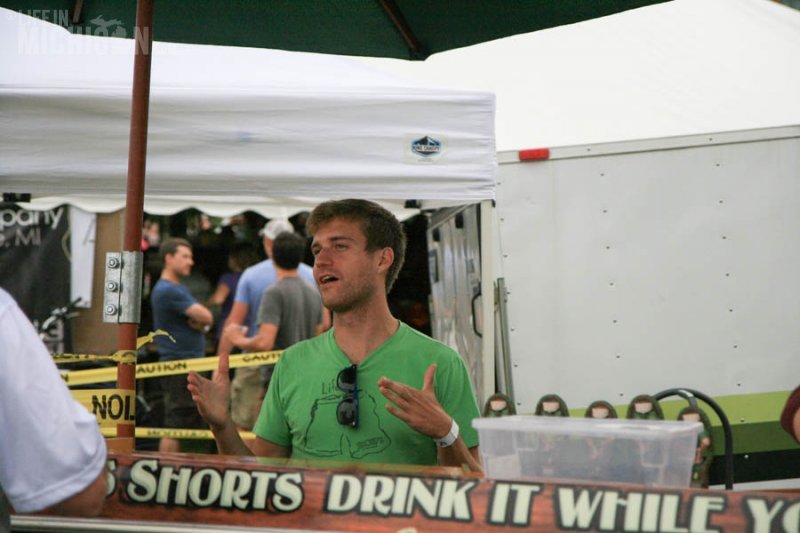 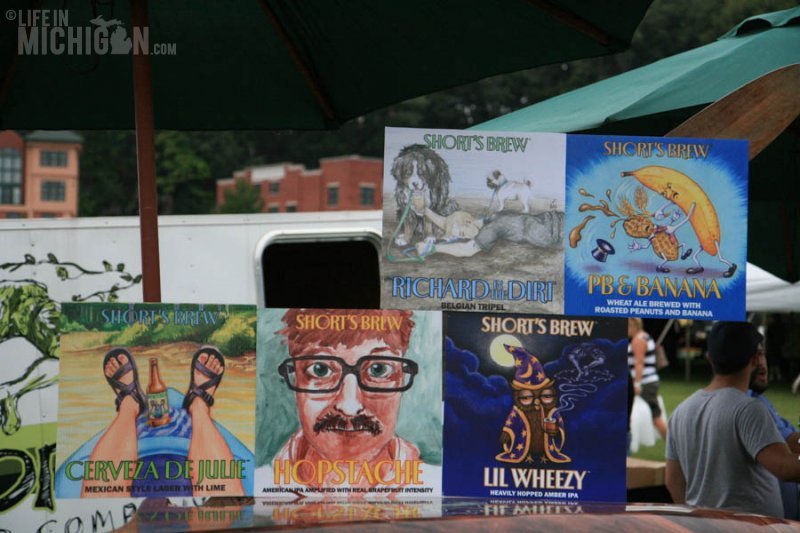 We don’t actually know the folks at Shorts, but we feel like they are our buds! We‘ve always have a good time when we visit them in Bellaire, and we really dig their creativity. Great beers with great names and fun artwork.  Check out Lil Wheezy for example, a great hoppy brown ale and just look at the art work!  Hopstache is a great IPA with a wonderful grapefruit kick.

Have a Firkin Beer with new friends… 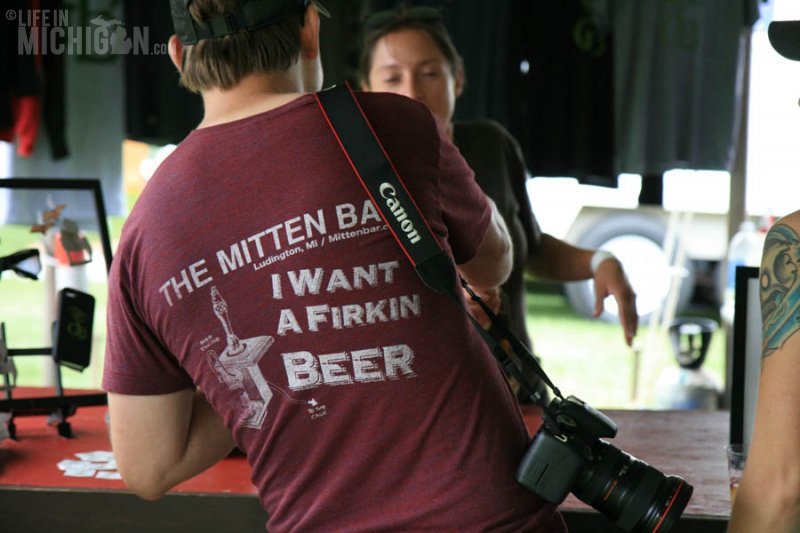 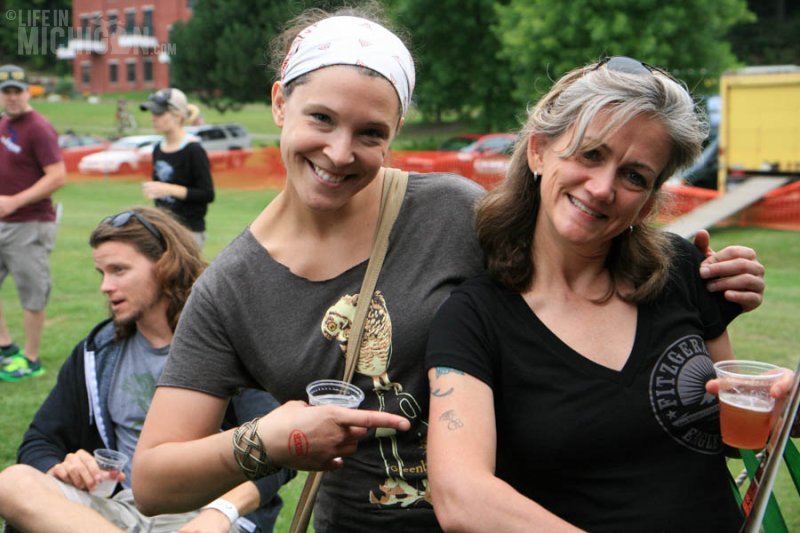 Jill is pointing out a new Greenbush Tattoo on Brenda‘s arm. Tattoos are not mandatory but you may want to get one. 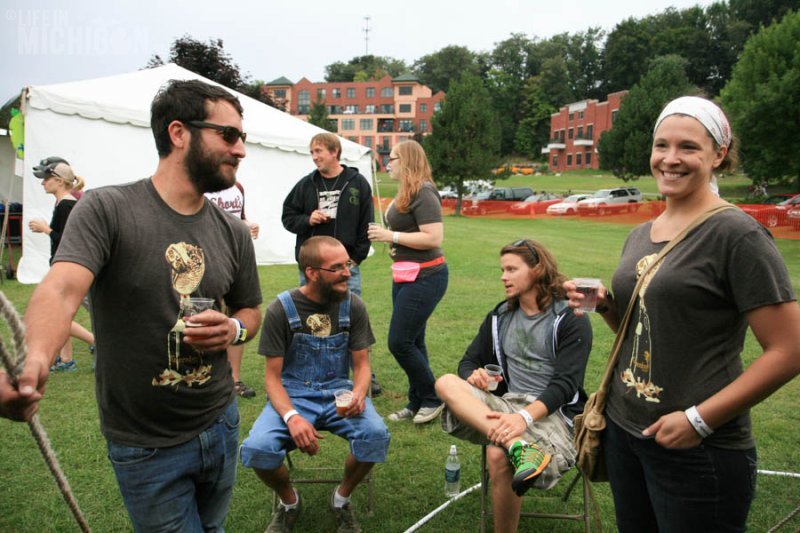 Greenbush’s PHD Malt Liquor and the Cask Demeter were  damn good. The Starchicken Shotgun IPA was pretty good too. Chuck broke out into a rendition of Afternoon Delight after hearing the word “Starchicken”. Not sure what that means but at least he has moved on from Joe Cocker’s “Space Captain”. Oo0h Ahh. We had to listen to that firken song 40 times between Ann Arbor and Marquette (note from Chuck – “Joe Cocker Rocks!!” 🙂 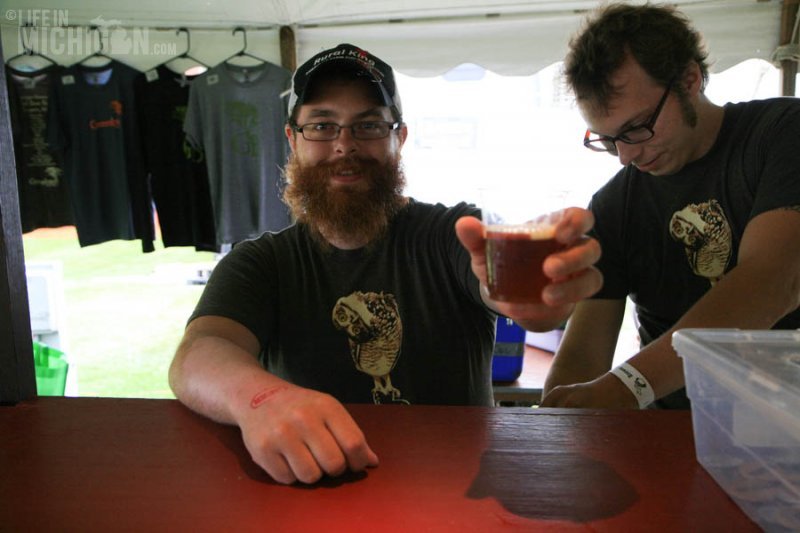 We’d love to be better friends with the crew at Khunhen Brewing. They probably want to avoid us after the “Afternoon Delight “reference. That is fine as long as they keep serving their DRIPA (Double Rice IPA). It  is so good.  The Imperial Creme Brule Java Stout was a fabulous liquid dessert!  Wow.  The Kuhnhenn crew were the good people with the shirt cannon. (In case you were wondering…) 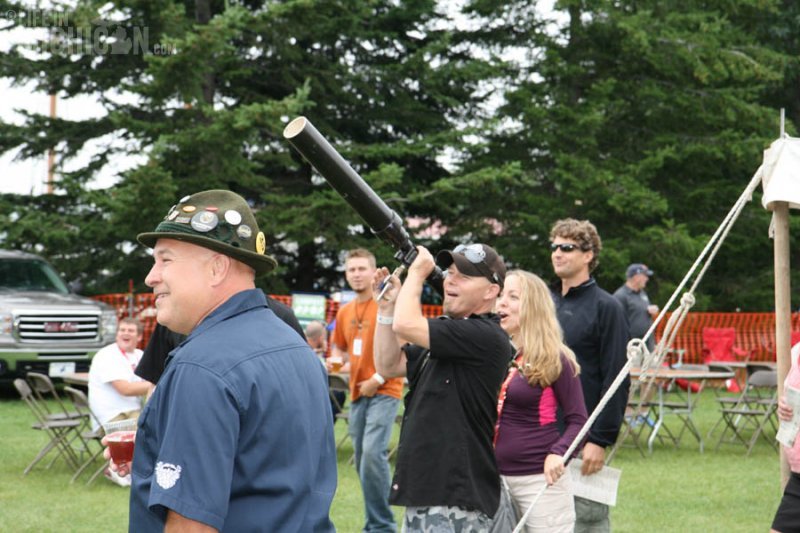 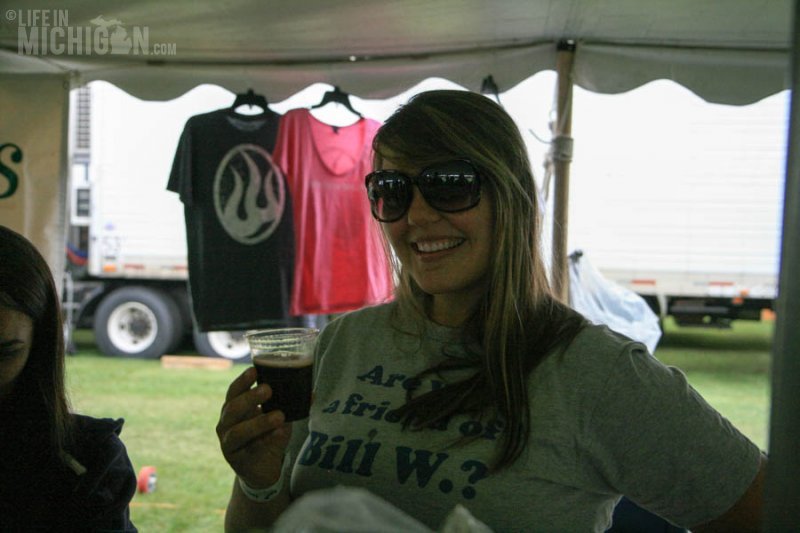 Chuck likes White Flame Brewing Company’s Kentucky Kiss – A barrel aged Scotch Ale.  He said, “It is excellent!”  We discovered their great beers at last year’s U.P. beer festival and have made it a habit to check in with them at each fest.  They also make a damn fine double IPA with their Big Willy! 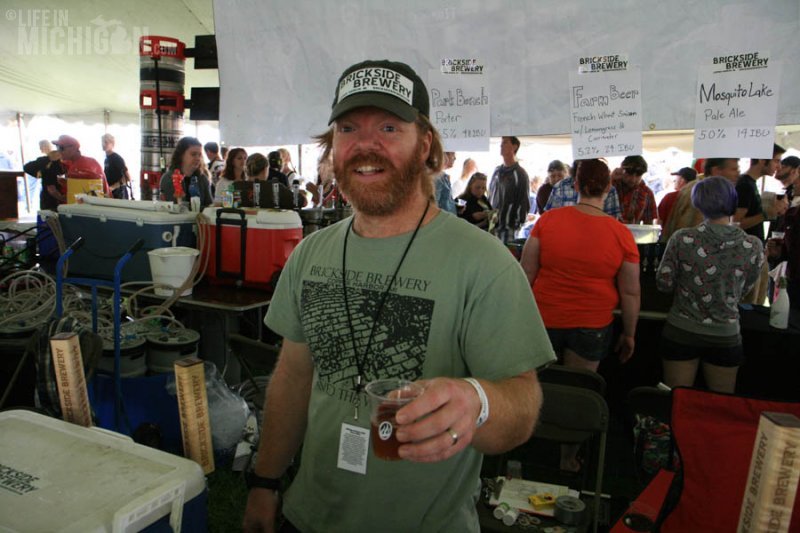 During our trip up to Copper Harbor the day before the U.P. Beer festival, we tried to stop in for a visit to Brickside Brewery.  The bummer was that they were closed due to a compressor issue.  The good news for us was that they were still able to share some of their fine beers at the fest.  Chainbreaker double IPA is a solid IPA.  Chuck thought it had a great hop nose.  He’s a hophead, wonder if that comes from being a metalhead too?? 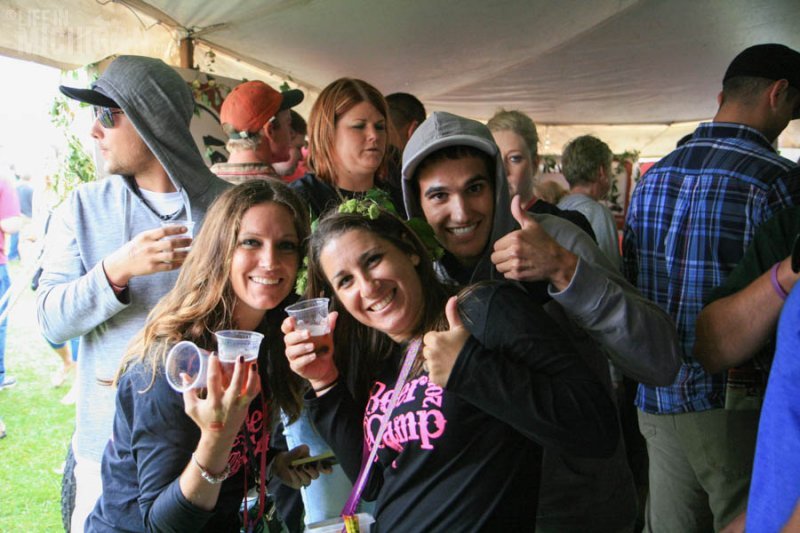 You may think beer makes everyone friendly at a beer fest, but we think friendly people just happen to enjoy a good beer. We met these Beer campers having a great time.  They also were enjoying their lunchable ham roll-ups. Not really our choice of treat, but you gotta love the imaginative choice for festival snacks. 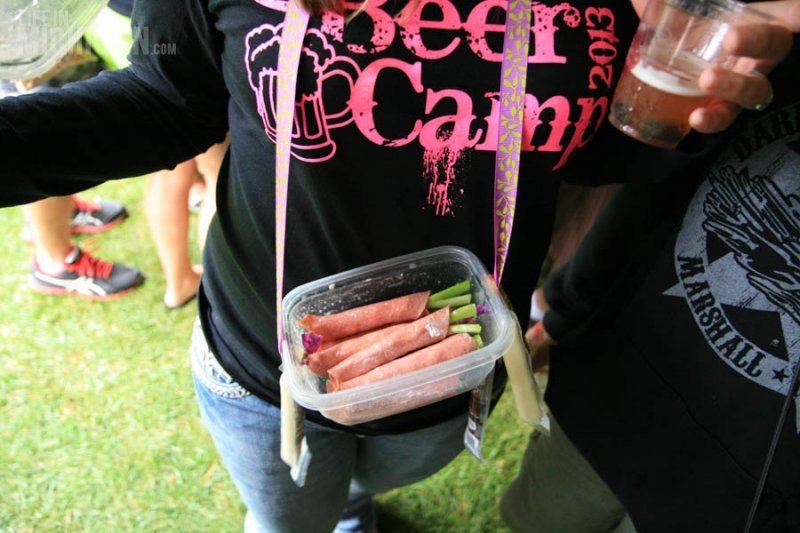 These friends graduated from NMU and were meeting up back in Michigan for a reunion just in time for the fest.  Brenda thought they were adorable. 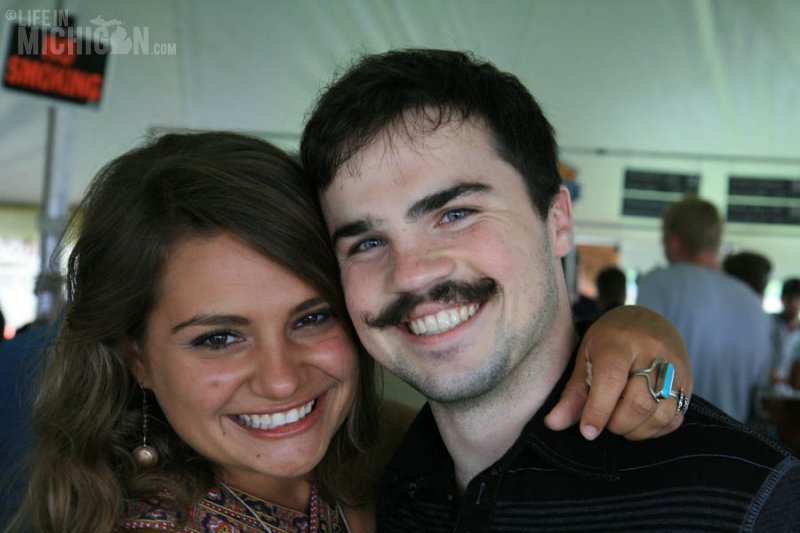 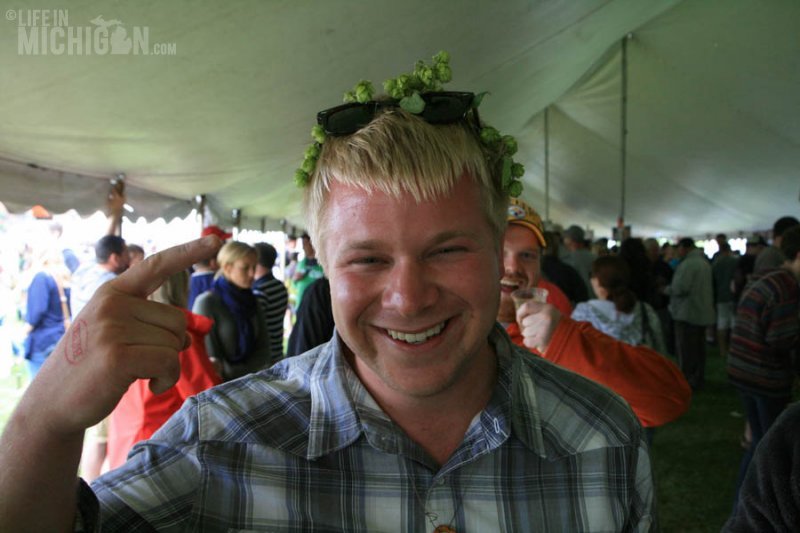 Keanu Reeves…I mean…Spiderman made it to the U.P. Beer festival too!!  We thought web spinning would be pretty handy for keeping track of your beer cup! 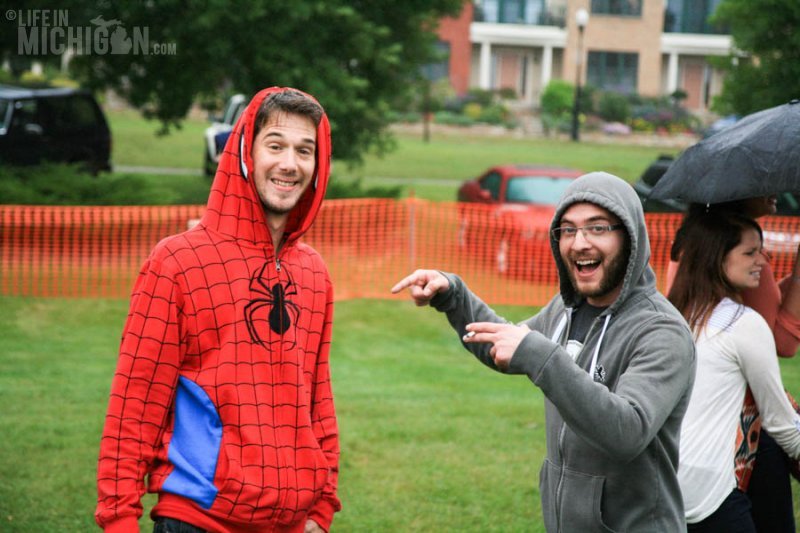 The misty rain didn’t stop the music either. 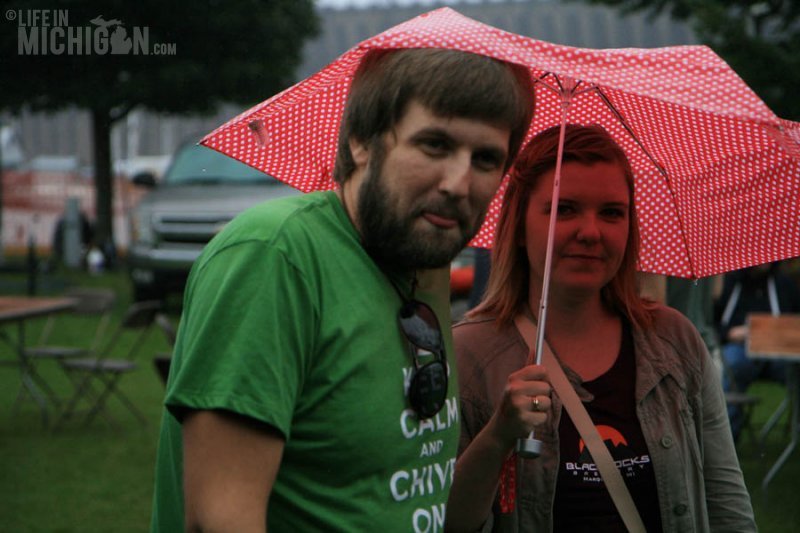 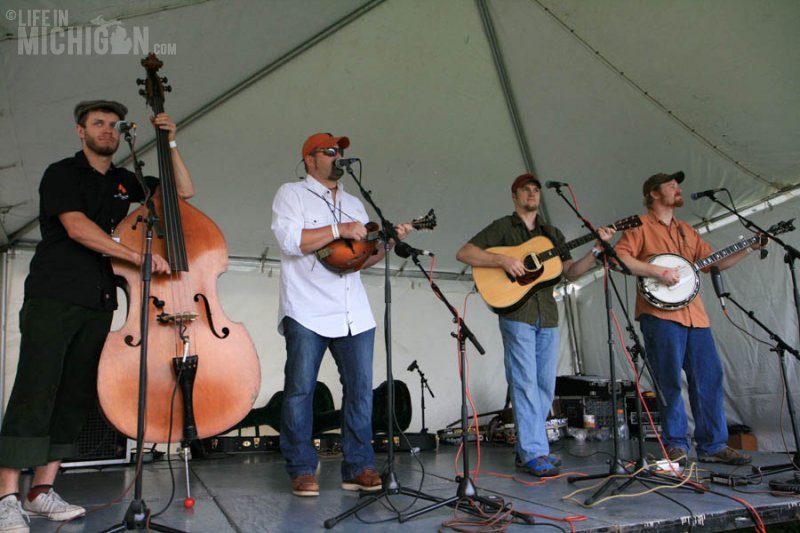 Chasin‘ Steel –  warmed up the crowd  for Blackrocks Electric Band. 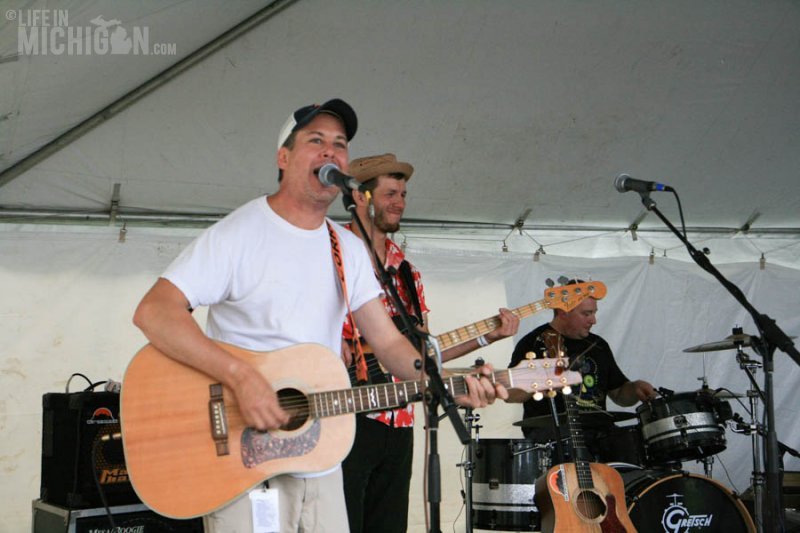 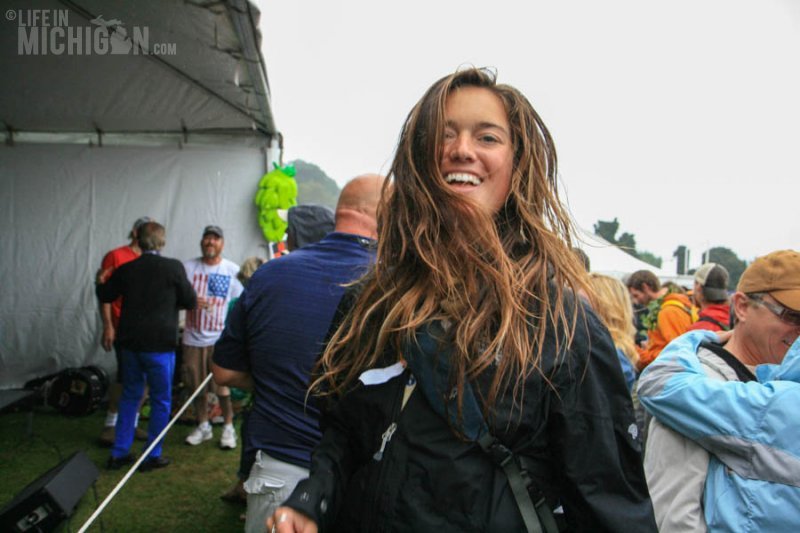 Pabst Blue Ribbon? Looking forward to next year’s U.P. Beer Festival. There are many more pictures in the gallery. 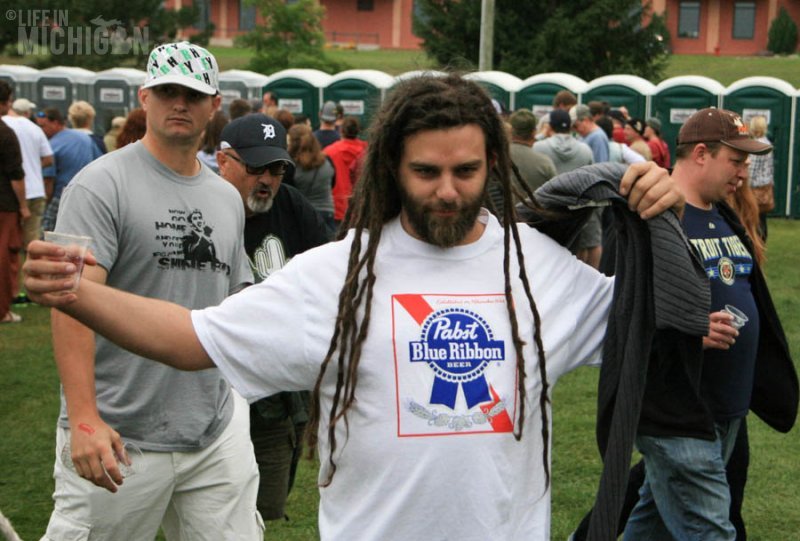