A vinyl and beer adventure exploring Rock City Music Company and Village Vinyl along with beers from Supernatural, Kuhnennen, Dragonmead, and Batch Brewing. 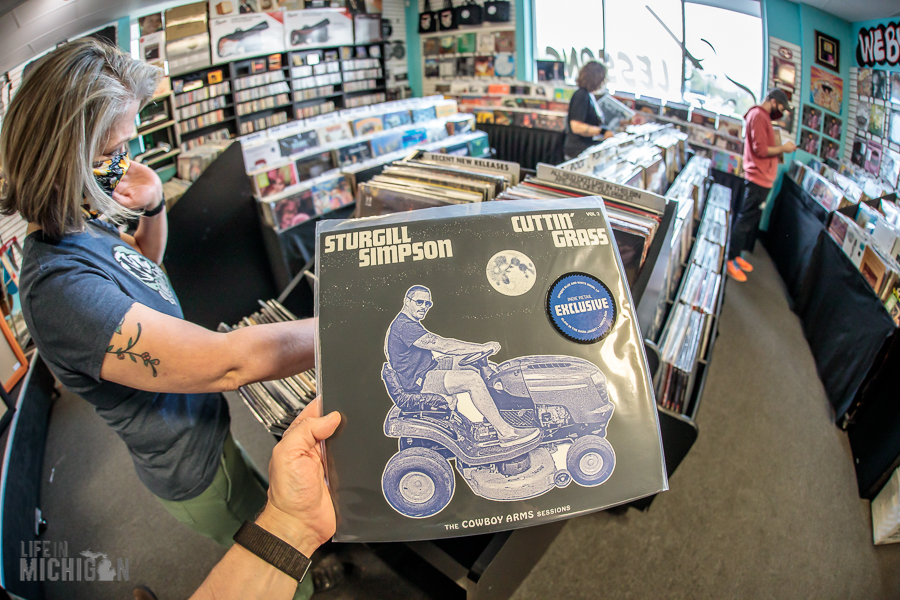 With another birthday weekend upon us, I asked my wonderful wife Brenda and our faithful travel buddies Jeff and Angie if they’d like to join me for some record shopping and beers. With our designated driver in tow, we set off for a vinyl and beer adventure

Our first stop on this vinyl and beer adventure is Rock City Music Company. They are your one-stop-shop for music. Not only can you buy your favorite musical gear, but you can also pick up some fabulous vinyl. Rock City Music’s collection spans music genres, so there is something for everyone. The store is easy to find at 33425 Five Mile Rd in Livonia, 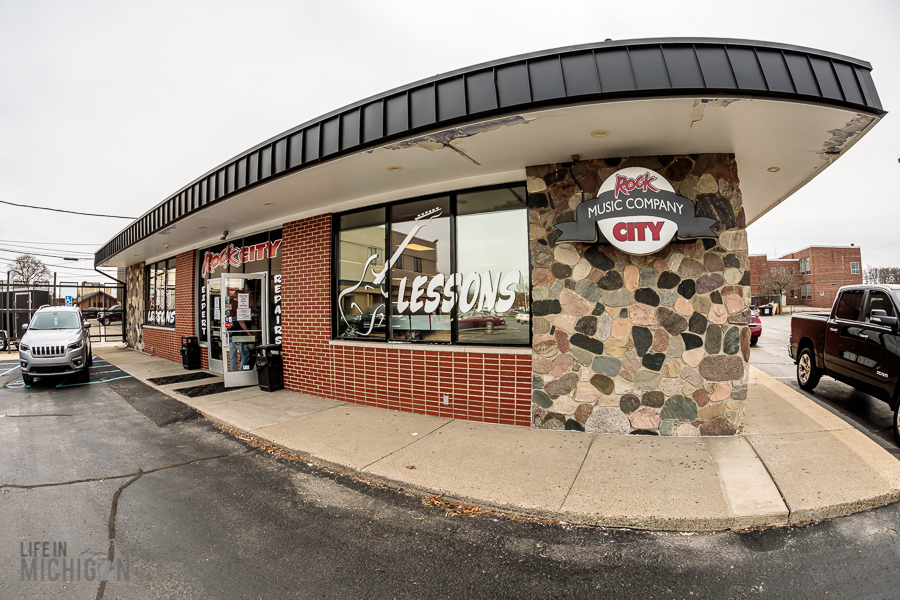 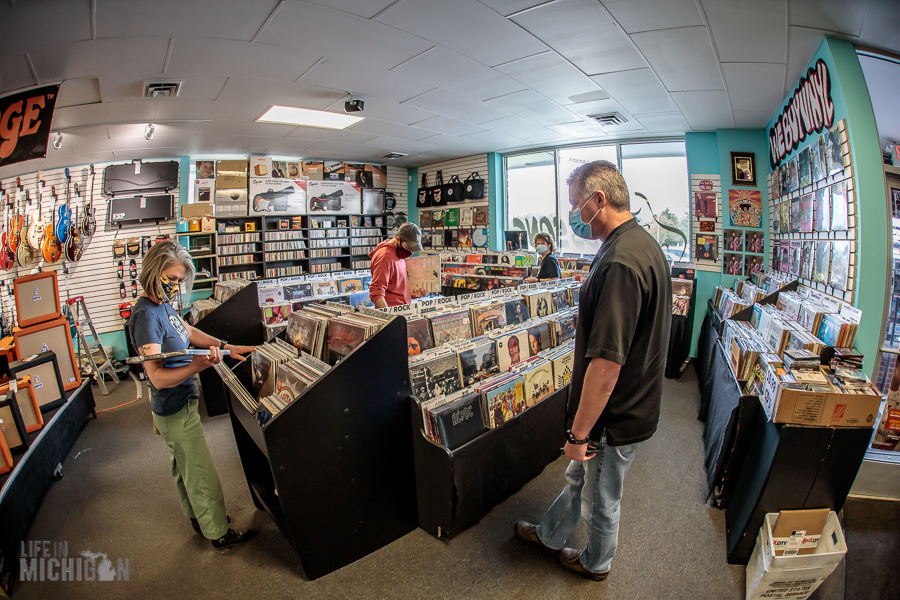 It was tough not to walk out with a truckload of albums (and an Orange amp). I did score some essential records. My haul included such gems as Cutting Grass Vol 2 by Sturgill Simpson, Peter Gabriel’s solo debut album, Queen’s first album, and ZZ Top’s first album. 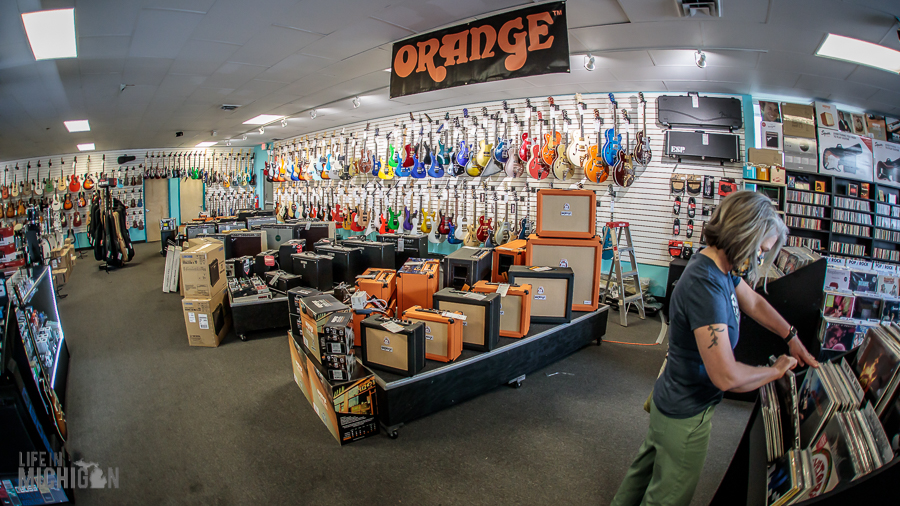 When the need for vinyl strikes, you can’t go wrong at Rock City Music Company. Tell Nick we said hello! Oh and be sure to tune into the Fans With Bands podcast as we’ll have an episode with Nick talking about Rock City Music, his obsession with Bruce Springsteen, and hanging out with Geddy Lee of Rush. 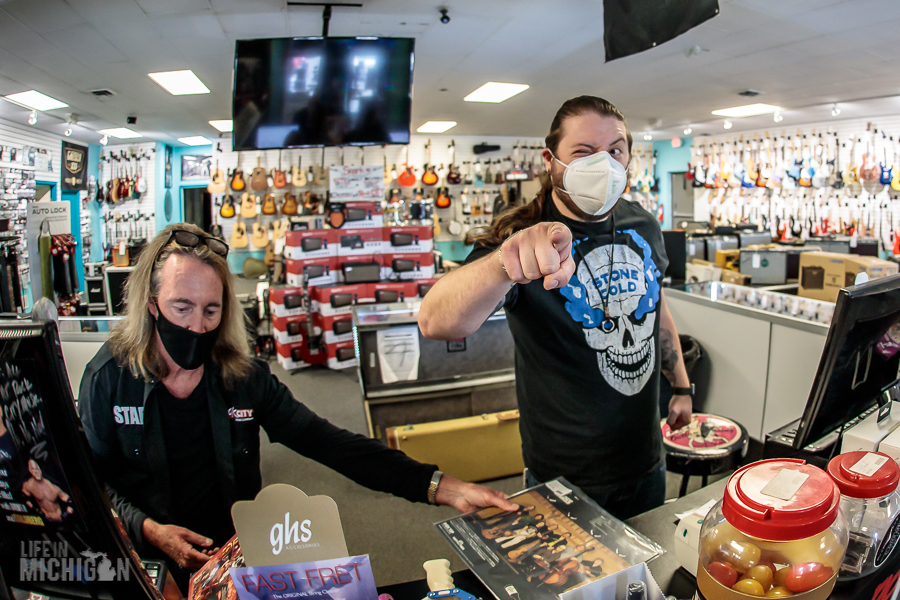 Getting spooky with Supernatural Brewing 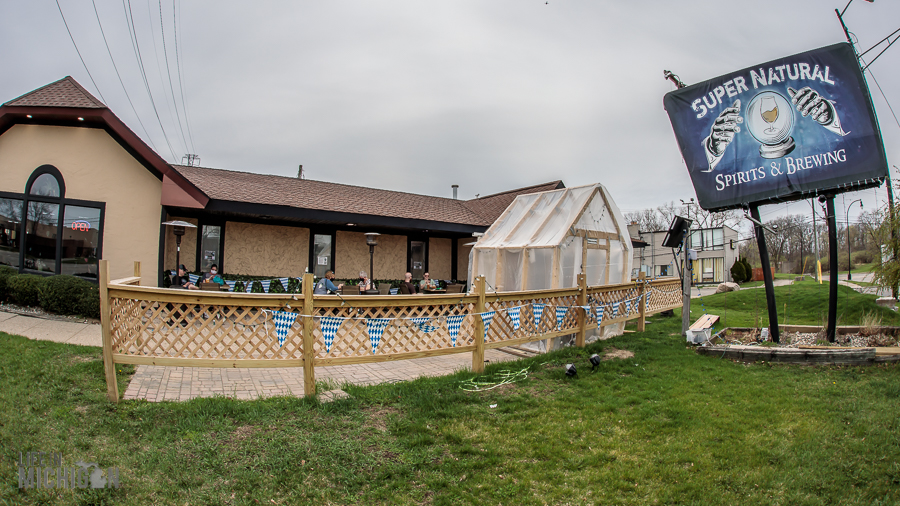 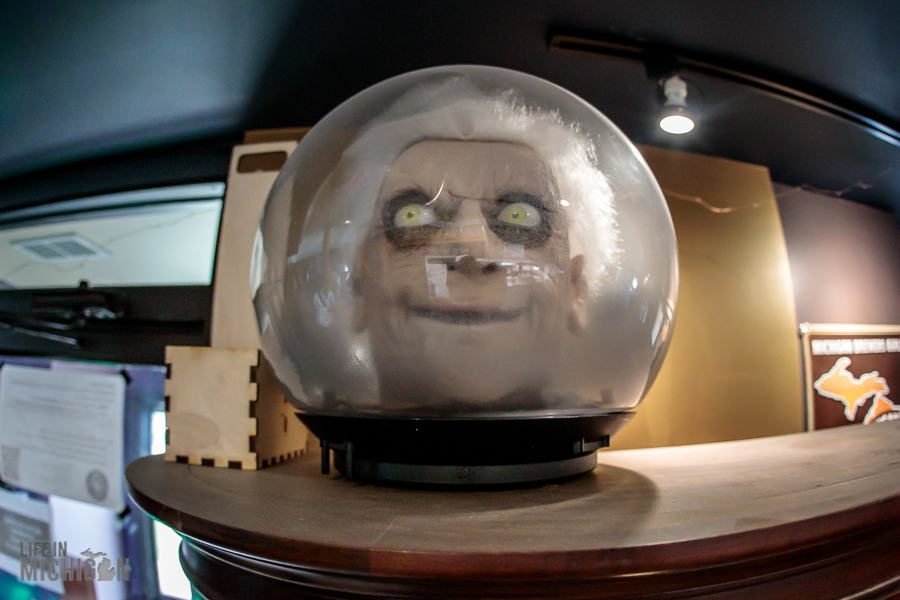 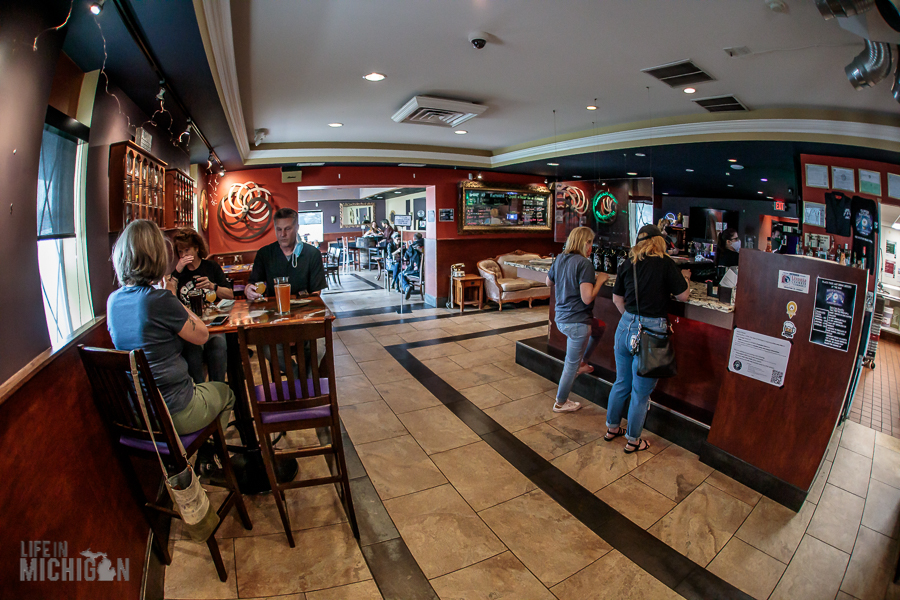 Like we’ve seen at a few other breweries, Supernatural Brewing has a Beer It Forward program. You can buy a beer for a friend or just some random person named Bob. I love the idea of paying it forward with a tasty Michigan beer. 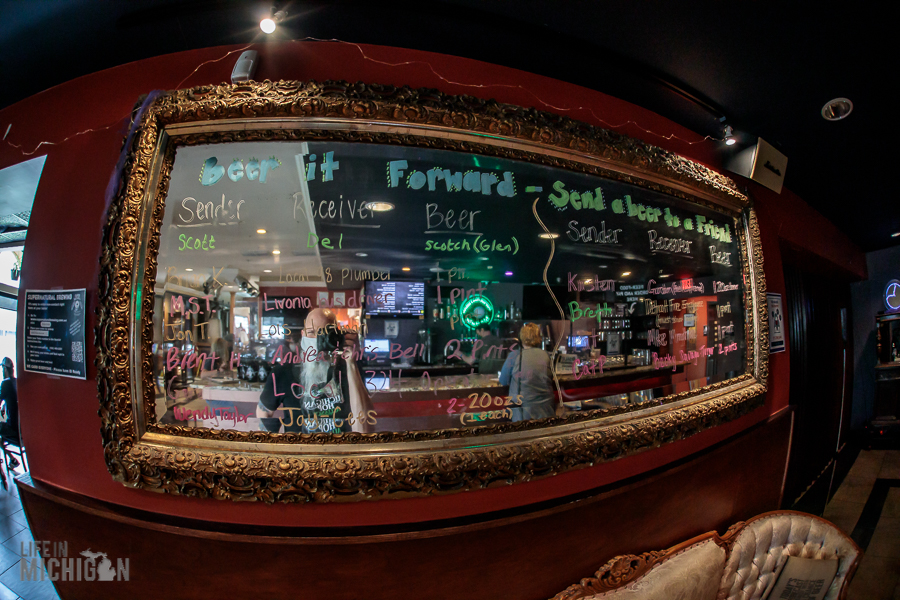 It was a little too early for dinner, but the food menu at Supernatural Brewing looked pretty good. With a stout on board, we were ready for more vinyl. 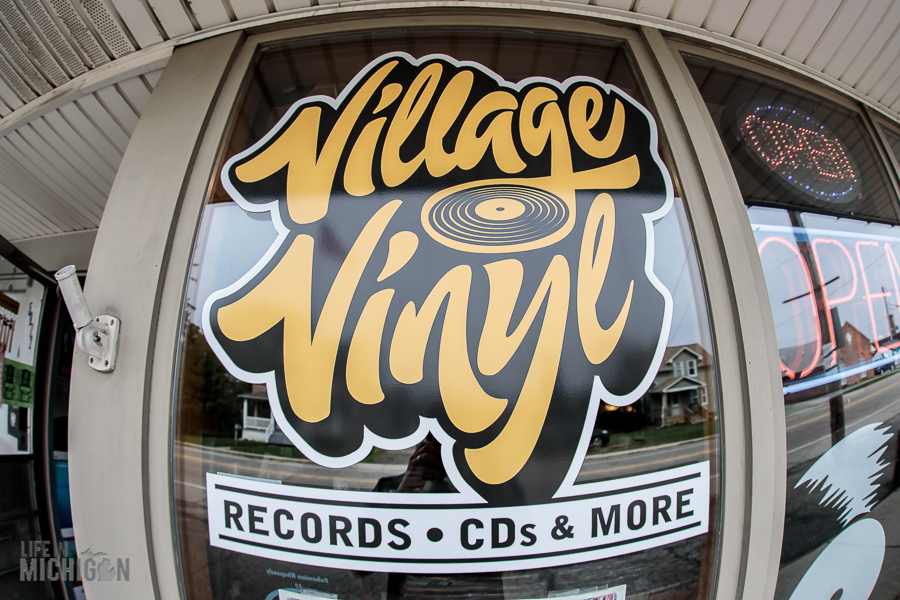 I’m not sure why it took me so long to get my butt over to Village Vinyl. Located at 5972 Chicago Rd. in Warren, they are literally across the street from the fantastic Kuhnhenn Brewing (mmm…DRIPA!). All I can say is that I’m sure to be back.

Village Vinyl isn’t a huge store, but it is packed with goodies. If you are into metal, punk, and indie rock, this store is for you. Now don’t worry if you aren’t a punker or metalhead. Village Vinyl also has a nice selection of other genres such as blues, country, Motown, and world music. On top of records, CDs, and tapes, Village Vinyl has some very cool collectibles. 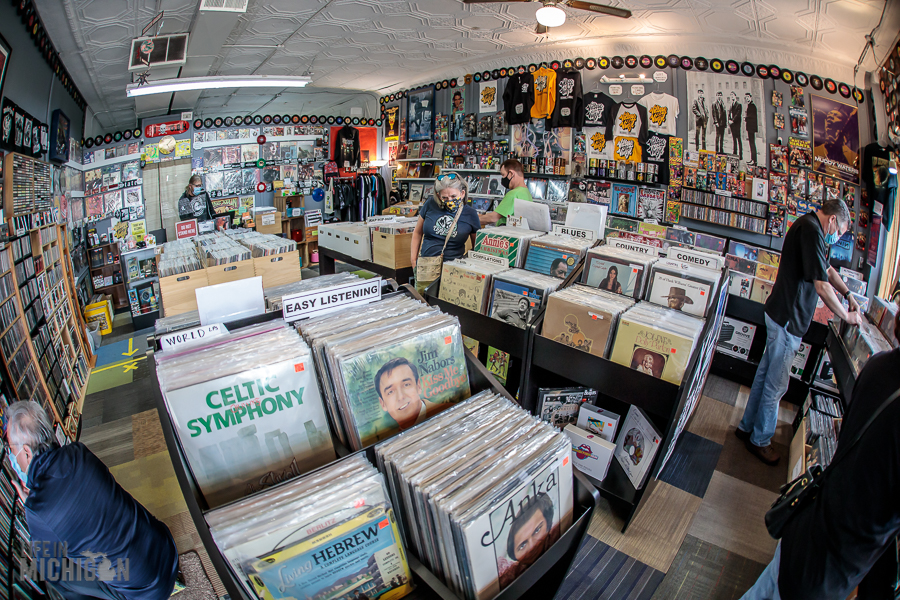 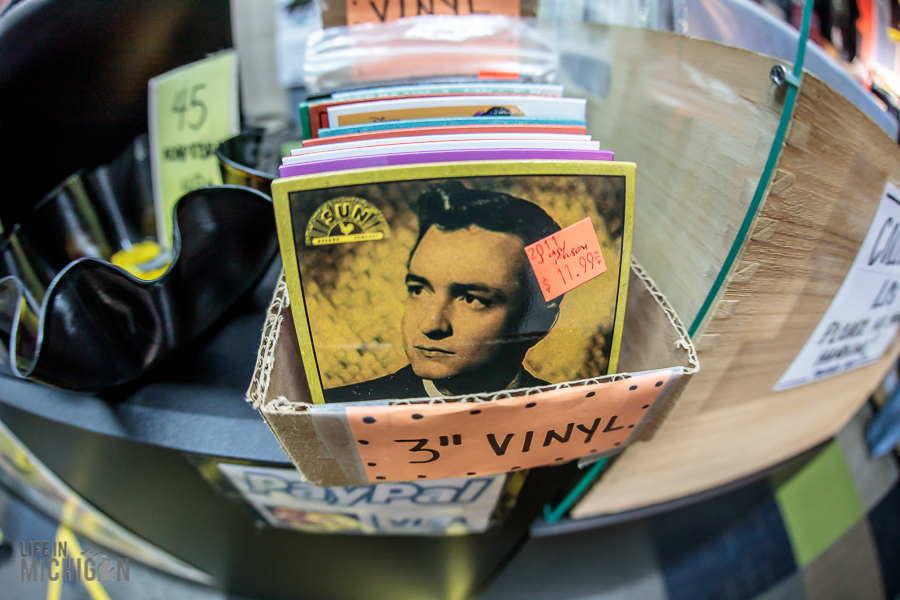 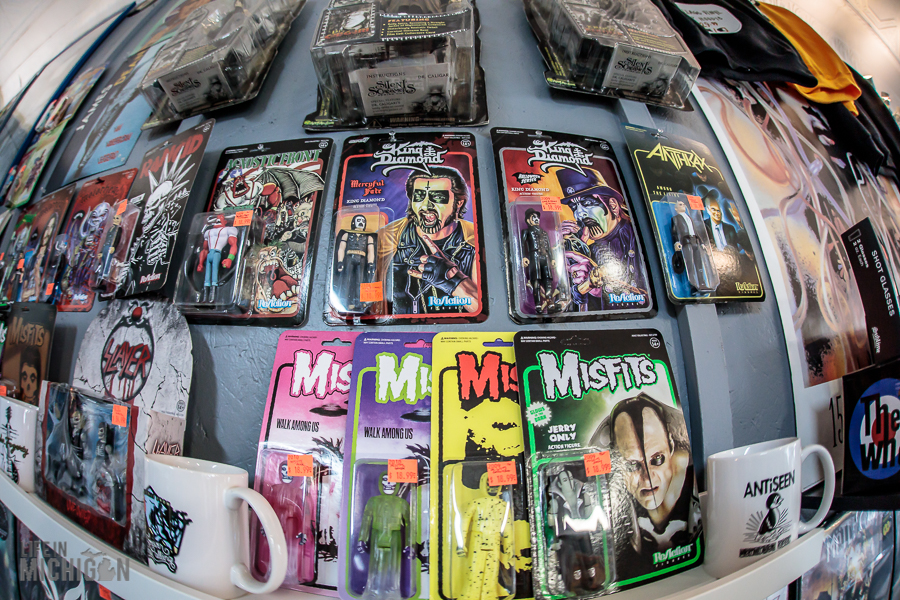 I found some treasures including Black Dahlia Murder’s Nightbringers, David Bowie’s second self-titled album (aka Space Oddity), and Alice In Chains Facelift. Just like at our earlier stop at Rock City,  I could have easily spent hours in Village Vinyl. I also would have needed a truck to get all my loot home. 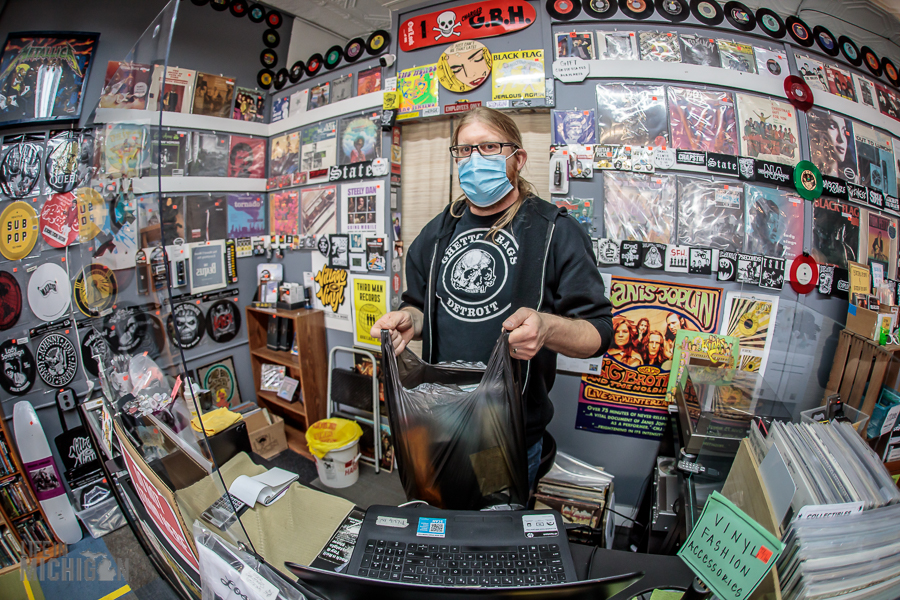 Again I found myself wondering, how in the hell did I not realize that Vintage Vinyl is right across the street from Kuhnhenn Brewing? Our next planned stop on the vinyl and beer tour was Dragonmead Brewery. However, it would be a tragedy to pass up some of Kuhnhenn’s delicious beers. 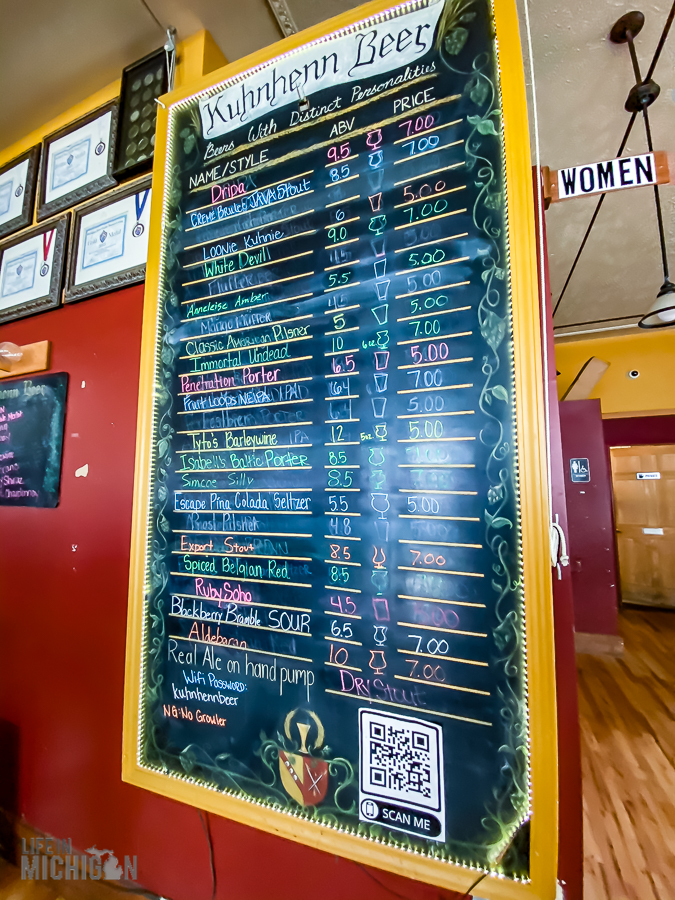 The weather wasn’t too bad, so we took our beers to the tent. We’ve been fans of Kuhnhenn’s for a long time and they never disappoint. While DRIPA is my typical go-to beer, I went rogue with a Loonie Kuhnie. A little lower octane, but still a damn fine beer. 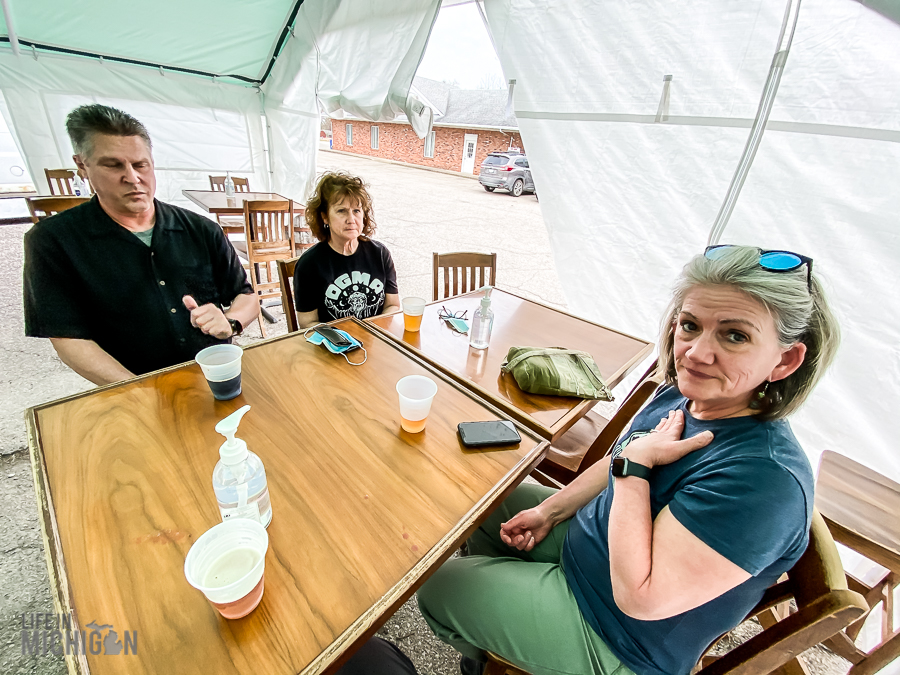 Back to the Plan: Dragonmead Brewery 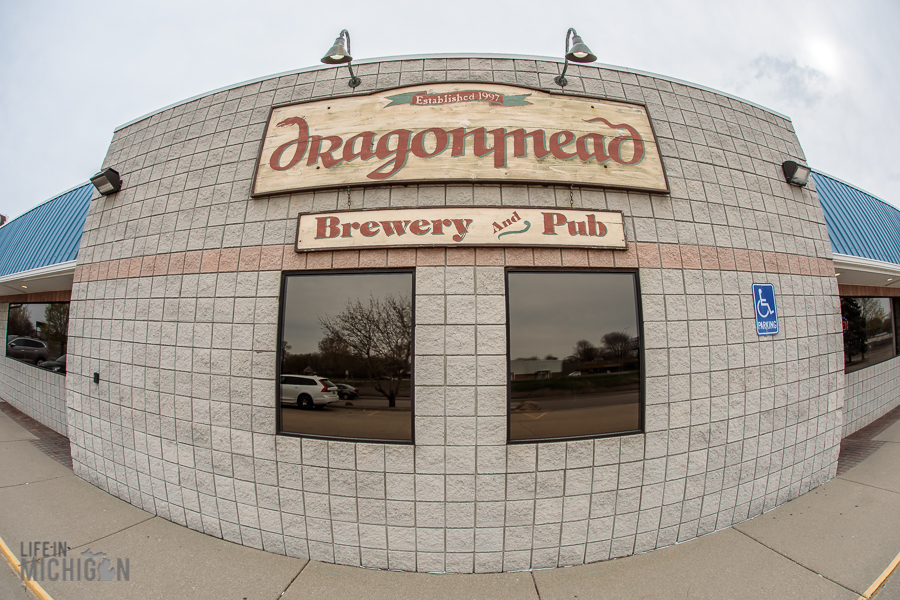 Just a few miles down the road at 14600 E Eleven Mile Rd in Warren, we hit our next planned stop at Dragonmead Brewery. Here again, I can’t believe it has taken this long to visit the pub. We’ve enjoyed their beers at many of the Michigan Brewers Guild and Boat House beer fests. I’d even talked with Jen Locher who gave me a couple of cards for free beers. Of course, I forgot to bring the cards along.

The list of magnificent beers on tap at Dragonmead is long. This called for getting a flight to enjoy a few different styles. While waiting on our beers, I browsed around the pub to take in the medieval theme. 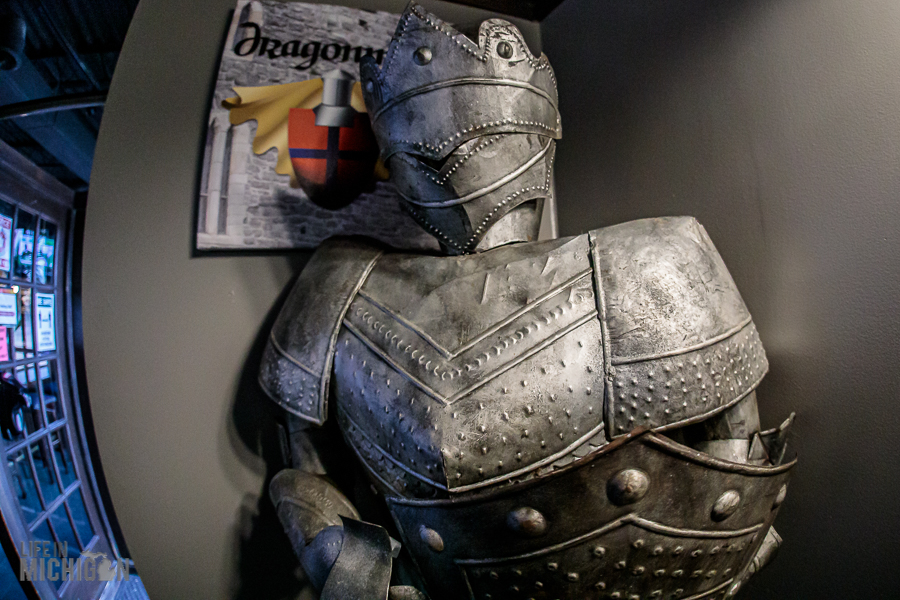 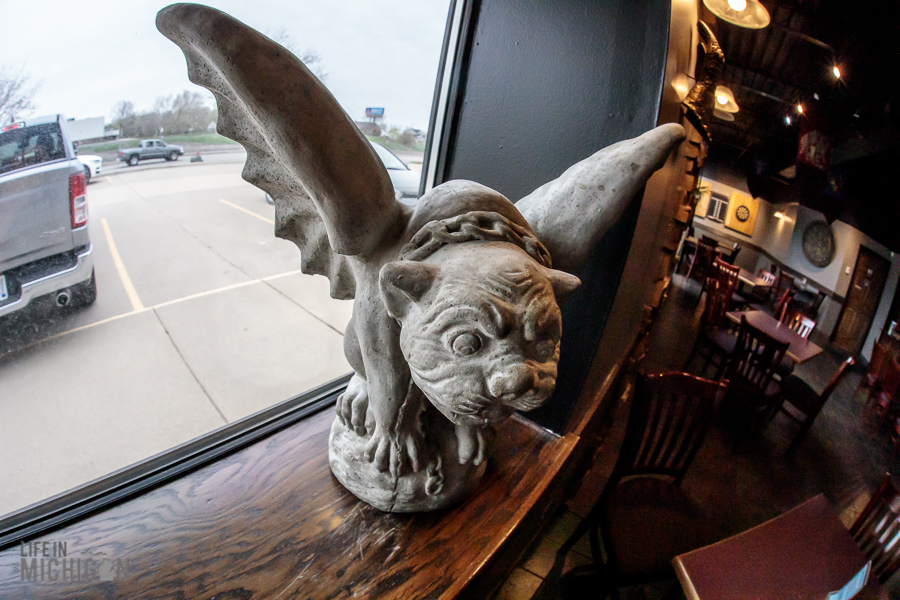 Every beer I tried at Dragonmead was excellent. For example, the cask-conditioned Iron Maiden was Killer (get it…Iron Maiden…Killers… 🙂 While the Sir William ESB had me imagining hanging out with Bill Shakespeare at his playhouse while he riffs on how much Iago hates Othello. Seriously though, Dragonmead brews some super beers. 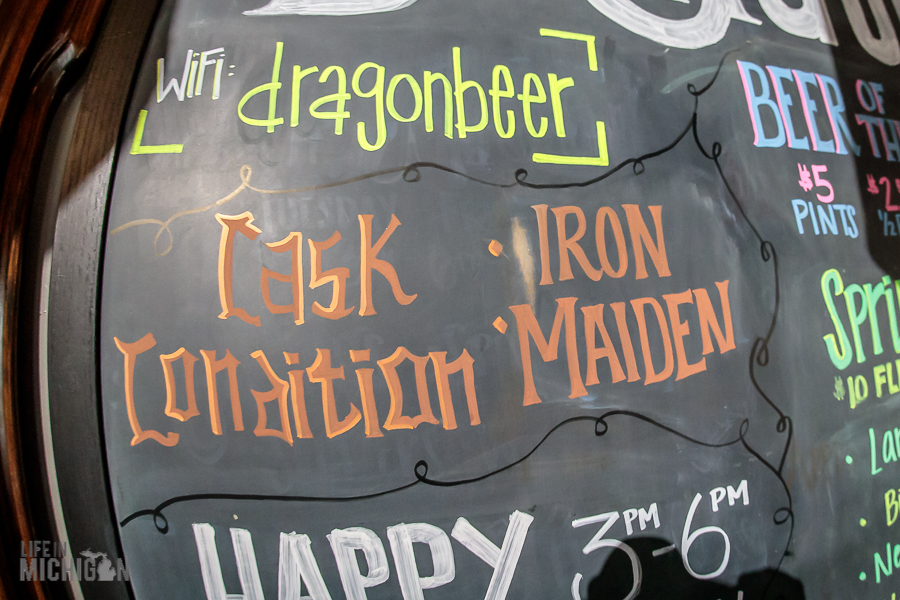 By the way, if you order snacks such as hummus or guac and chips, you better be hungry. We ordered both and received two huge plates. After polishing off those snacks we had no room for dinner. 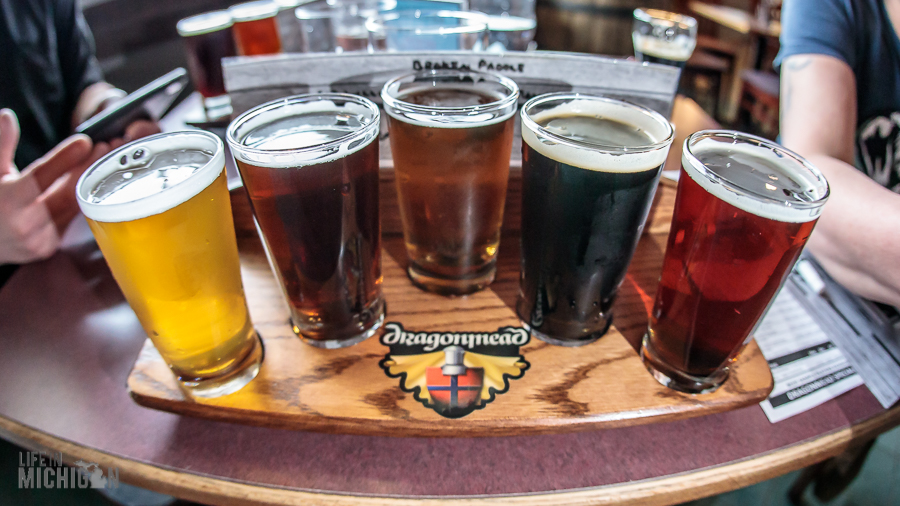 Visiting our friends at Batch Brewing

The last stop on the vinyl and beer tour is Batch Brewing. I dare say that Batch hit one out of the park with their Fauci Field house. Nearly every table was full of happy patrons. 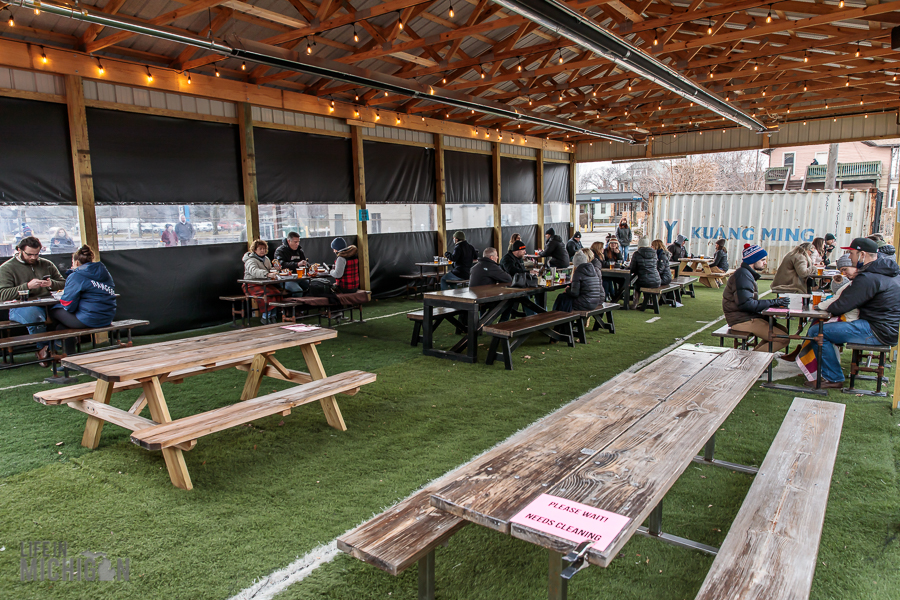 We enjoyed one last beer as we reveled in our good fortune. This vinyl and beer adventure was a wonderful way to spend time with my family. We explored new venues, sampled delicious beer, and took home some vinyl gems to enjoy for years to come. 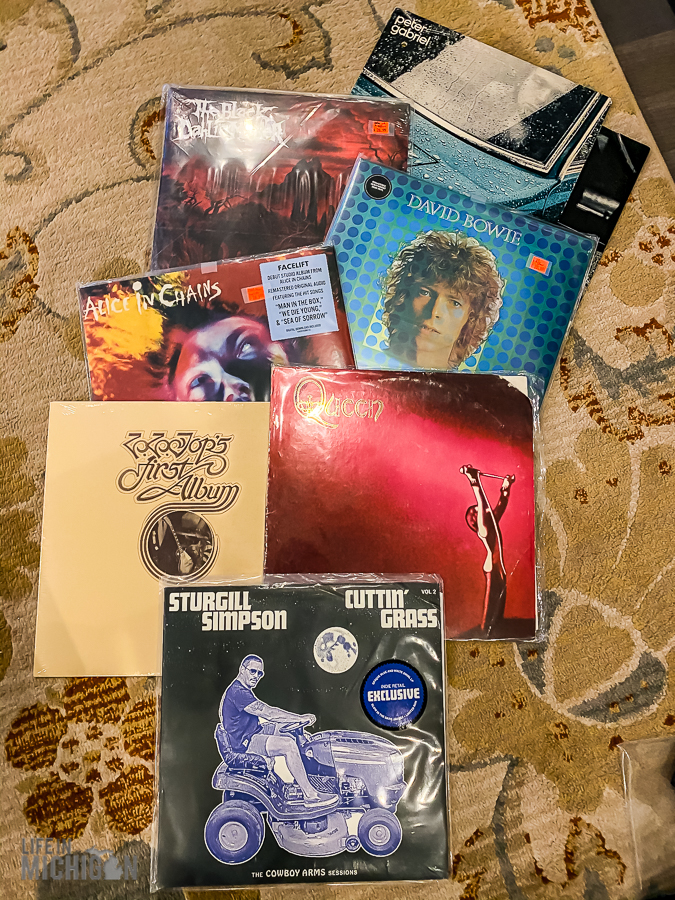 We have a few more pictures in the gallery. Our vinyl and beer adventure just scratches the surface of fantastic record stores and breweries in Michigan. Do you have a favorite? We would love to hear about your adventures. Feel free to share them in a comment on our website or on social media such as the Life In Michigan Facebook group.