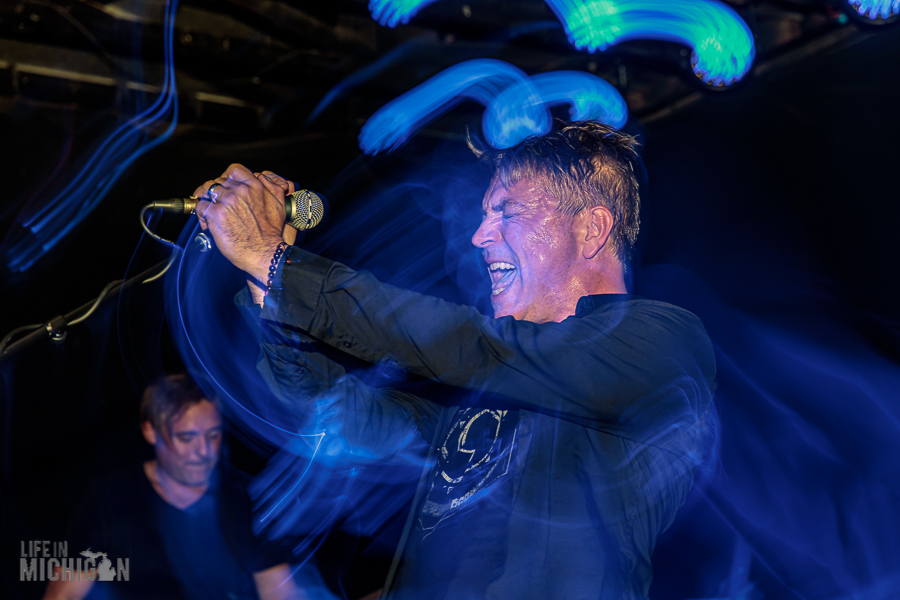 One hundred shows is a big deal. Given that we lost 18 or so months to the pandemic, playing your 100th show is definitely cause to celebrate. I think I literally jumped for joy when Warhorses announced the line-up to celebrate their 100th show at Small’s in Hamtramck. Honestly, just being able to see Warhorses alone after such a long wait is reason enough to get excited. One of the last shows I saw in January of 2020 was Warhorses jamming with Werewolves and The Picturebooks. That show was phenomenal and Warhorses once again blew me away.

Tonight’s extravaganza is extra special as opening up is Deadsurf and Universal Temple of Divine Power. I’m always looking forward to bands I’ve not yet heard of, so Deadsurf is a treat. The extra special sauce is seeing Universal Temple of Divine Power. This band became a favorite of mine 15 years ago and then they broke up. Witnessing their return is a gift from heaven. 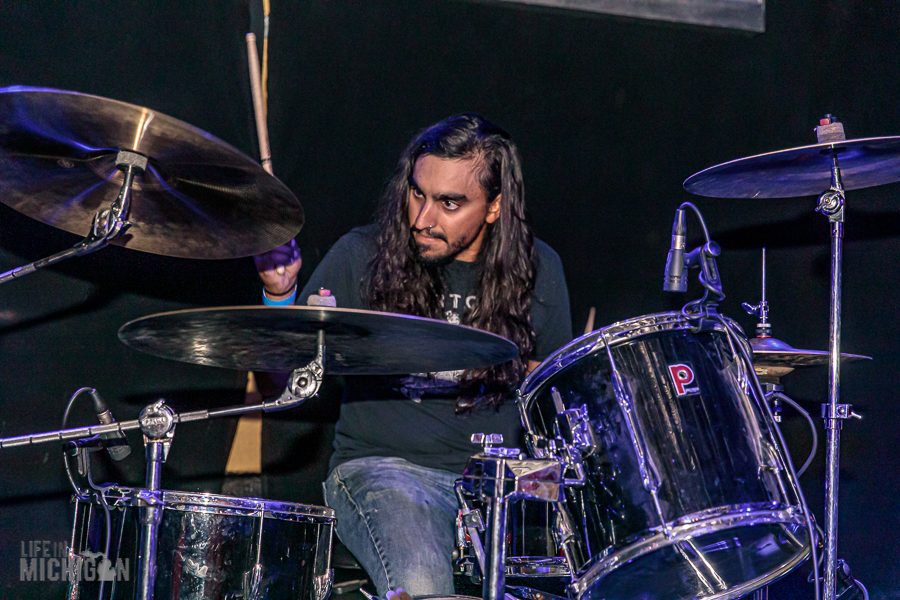 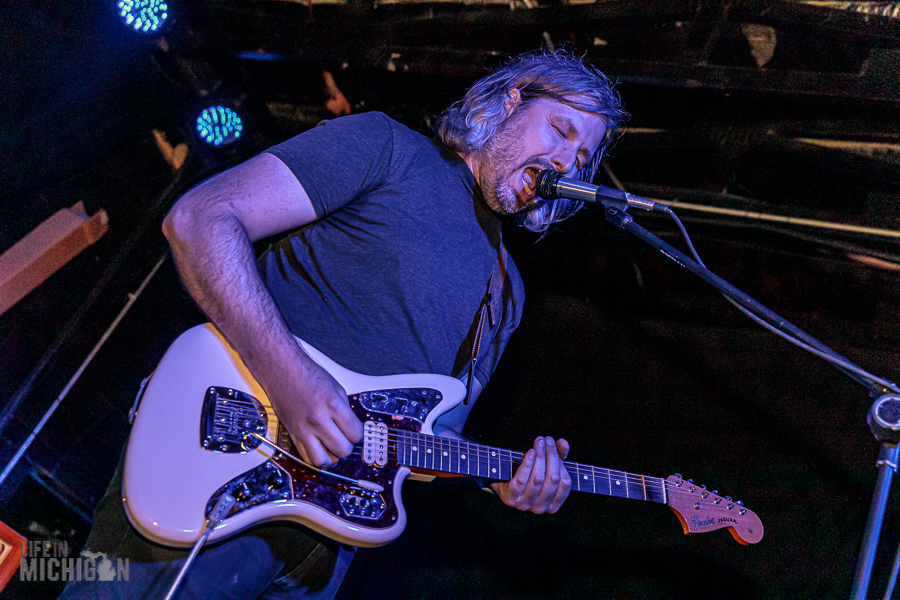 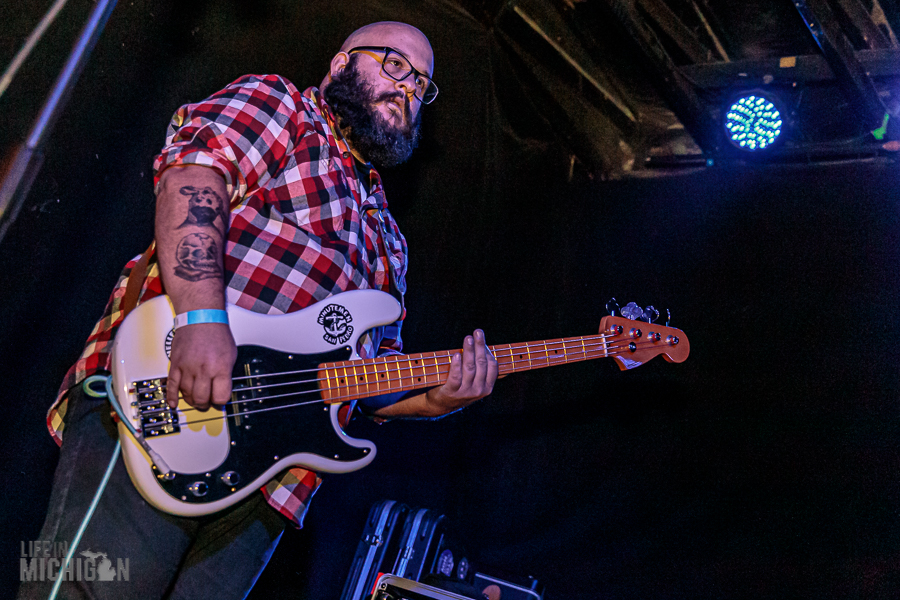 I think I mentioned earlier my love of Universal Temple of Divine Power. I shared with Mike Alexander before the show the story of hearing them the first time. Therefore, I figure I’ll share it with you.

It was Art Fair time in Ann Arbor around 2007 or 2008 I believe. A typically hot Art Fair day and I was enjoying a beer at Arbor Brewing when my brother from another mother Ron called. “Where you at?” Ron asked. “I’m enjoying a Sacred Cow and talking to my new best friend at the bar.” Ron fires back “Get your ass down here to Grizzly Peak. You’ve got to hear this band!”. Given Ron’s excitement, I headed down to meet him and Jeff at the music stage outside Grizzly Peak. As I approached, I heard this burly blues music gaining in intensity. I think the next tune was “Get On Home”. My jaw dropped open and I was hooked. 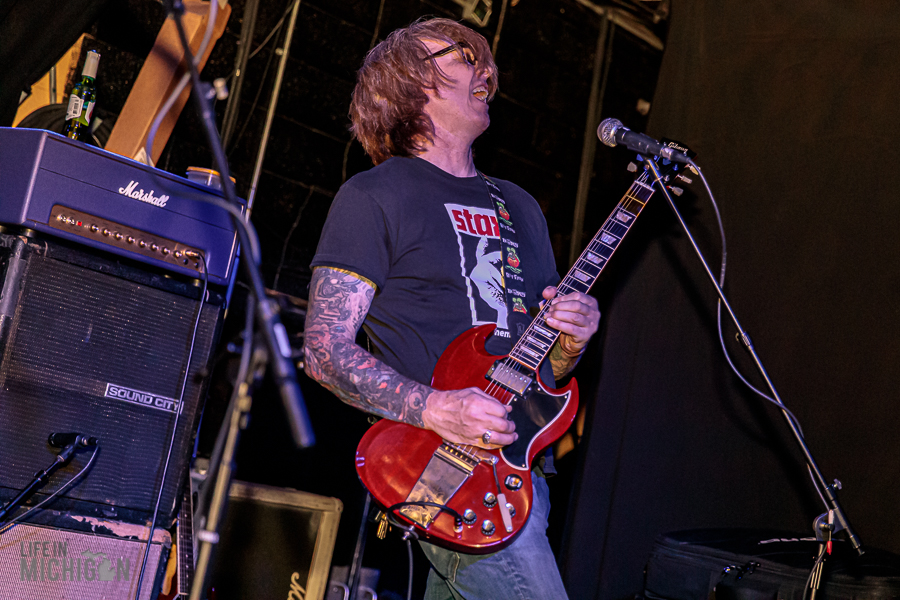 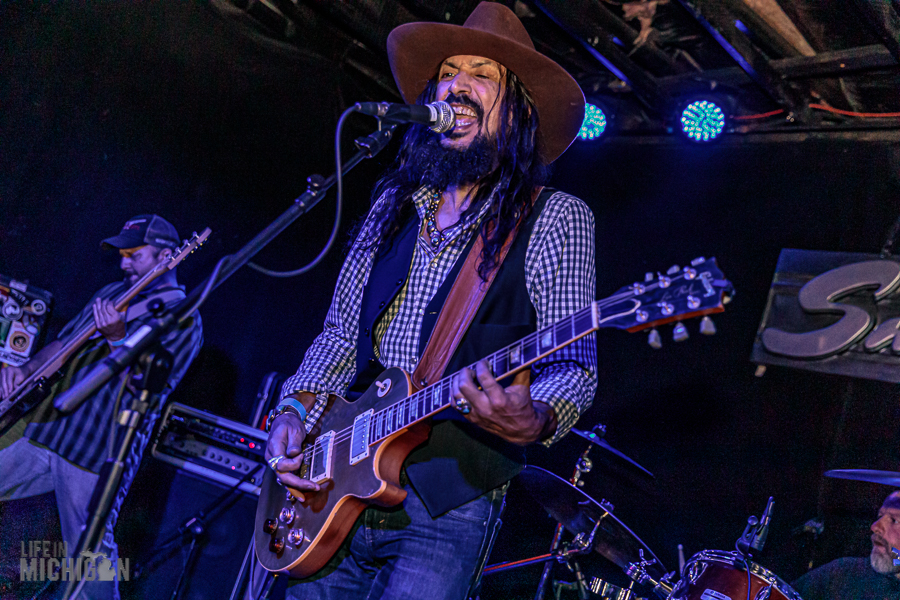 I’ll be honest, I lost track of the setlist. I’m pretty sure they opened with the barn burning “Move It On Over”. Chris and Martin laid down a rock solid foundation for Chuck and Elliott to lean in hard with stellar blue rock riffage. Hopefully, I did not disturb anyone by belting out the lyrics to “Get On Home”. I only caught the name of one new tune called “Factory Blues”. Chuck’s slide guitar was cookin. I’m thrilled that Universal Temple of Divine Power is back in action. 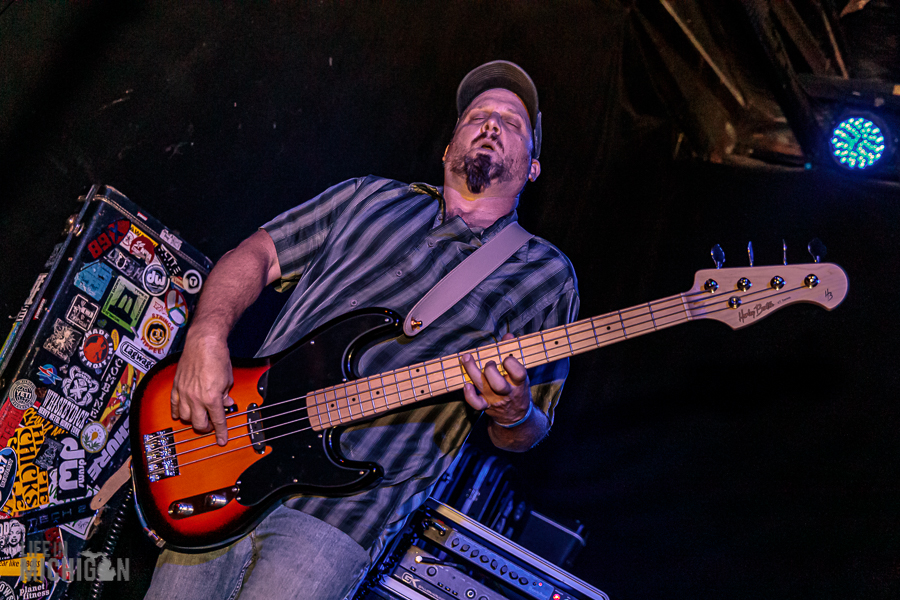 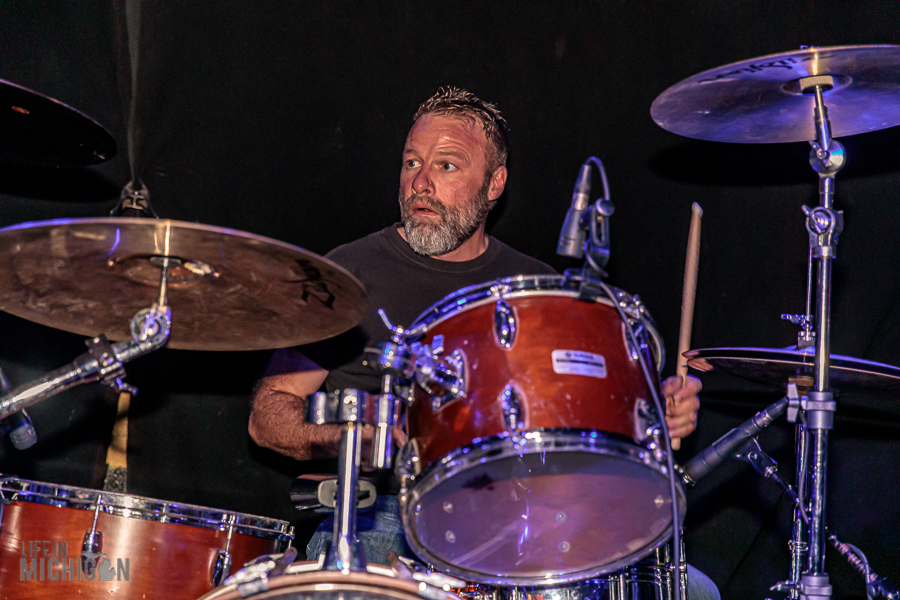 Finishing up a mighty night of rock is Warhorses celebrating their 100th show. I can’t thank Chris and Fuzz Fest enough for turning me on to this band. Every show that Warhorses has put on is unique and reaffirming that rock music is alive and well. They showcase their marvelous array of dynamic musical textures that both caress and claw. 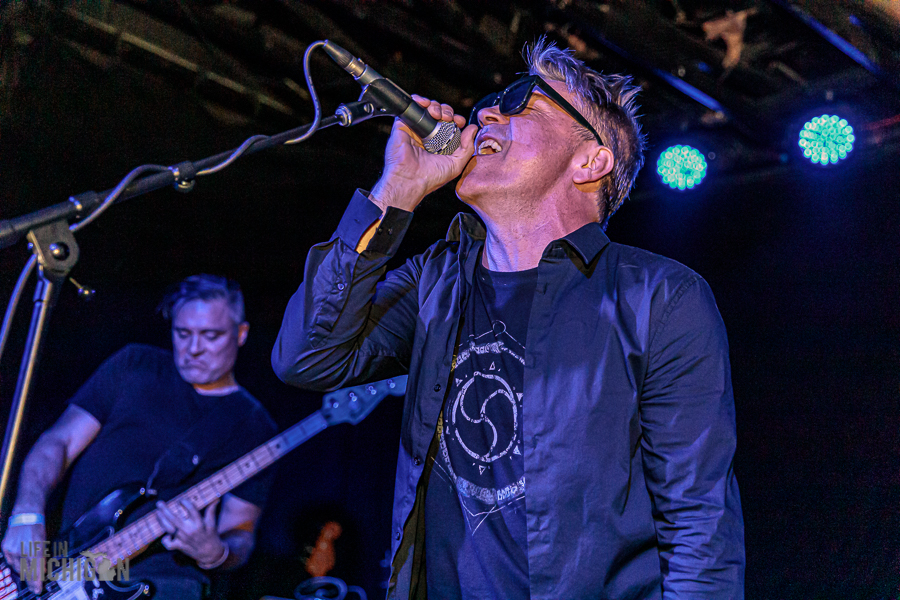 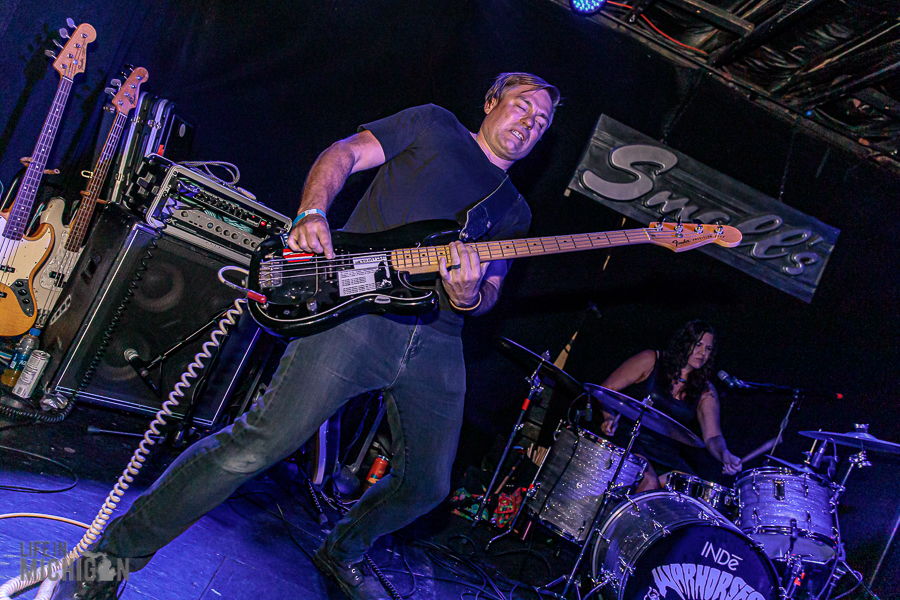 The opening tune “Gabriel” by Laughing Hyenas strangely fits the dead blue lights. Mike’s trumpet and EZ’s special effects mix of lap steel and pedals along with the thrumming rhythm were deeply psychedelic. The chill blue lights added to the effect of disconnected realities. 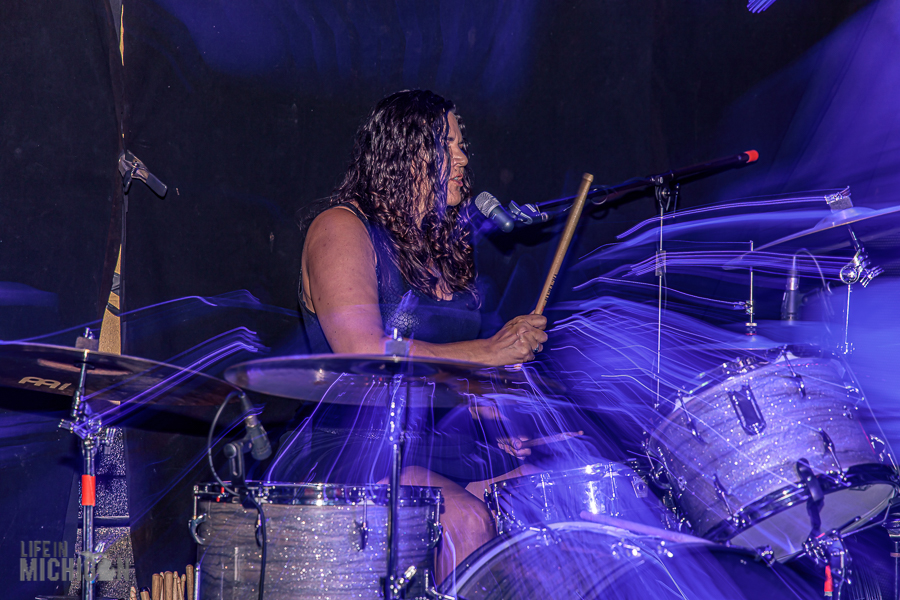 As I watched and listened to Warhorses playing “Desintegracion” and “Sound of Thunder” from their Shadow Gold album, I thought of witnessing the power of rock music. There are emotions playing across Mike’s face as he sings. The magnetic pulse of the bass moves Nathan across the stage. Kristin’s face is one of calm and content as she drives the band with her forceful drums. The guitar appears to be alive in EZ’s hands as he tames a chord then lets the guitar blaze in a solo. 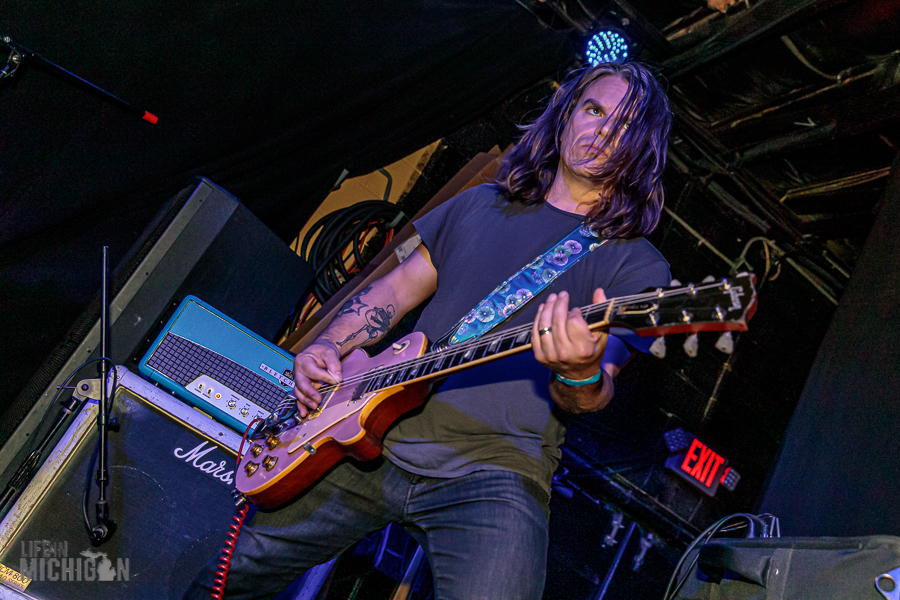 I completely enjoyed how Warhorses made the covers in the set their own. For instance, the covers of “What We All Want” by the Gang of Four and “Love My Way” by the Psychedelic Furs. If I dare say, Warhorses outshined the originals. Every damn time I see this band, I walk away awestruck and mesmerized.

Hit up the photo galleries for Deadsurf, Universal Temple of Divine Power, and Warhorses. If you made it to the show, drop a comment and share your experience. While you are at it, go ahead and share the post to spread the love for the great music scene we have in Michigan. 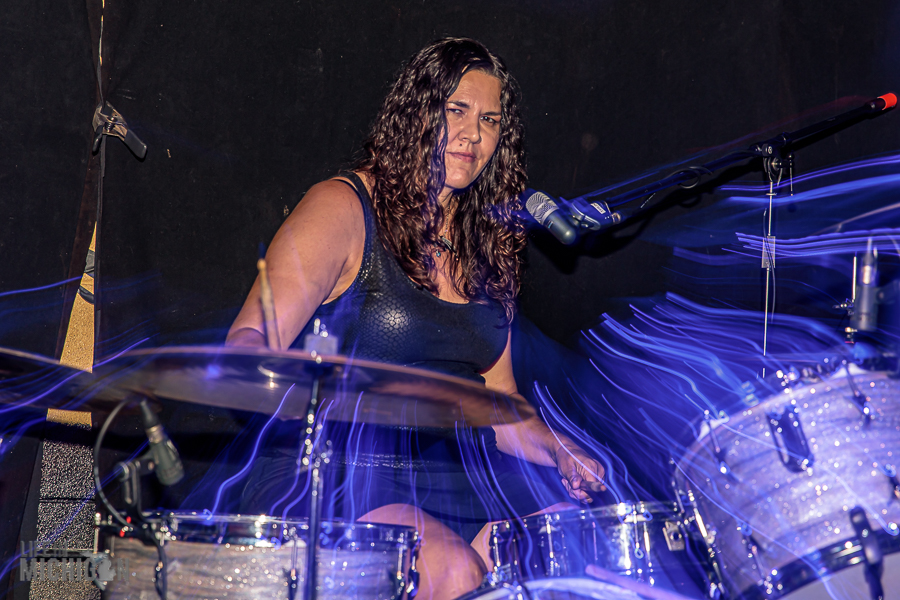