The Water Hill Music Fest is a magical community event where festival goers wander through the streets of Ann Arbor’s  Water Hill neighborhood. Dogs, kids, and music enthusiasts mingle, giggle, dance, sing and basically enjoy the day. On the first Sunday of May, anyone who lives on Water Hill is encouraged to step out onto their porch to play music. The festival requires that each performing band includes at least one member who lives in the Water Hill neighborhood.

You can’t possibly see it all. I counted over 80 performers on the schedule; that is a lot of talent!

We at LifeinMichigan.com would like to thank Paul and Claire Tinkerhess for producing the Water Hill Music Fest. And we certainly can’t forget the volunteers and musicians who make this festival possible. I can’t think of a similar event that I’ve attended. All of that talent jammed into one neighborhood is mind boggling, but its the ability to create an afternoon where music is shared so beautifully that is truly amazing. Thank you Paul and Claire for making it happen.

Did you know there was a neighborhood named Water Hill? I didn’t. It is a  neighborhood northwest of downtown Ann Arbor bounded by Miller Avenue, Brooks Street, Sunset Road, and the Ann Arbor Railroad tracks. The neighborhood is named after a legacy of the streams that ran down the hill. It has streets with names: Spring, Fountain, Brookridge, and Brooks — Plus the water plant sits at the very top.

We snagged our program from the Big City Small World Bakery, which is on the corner of Spring and Miller Streets. The program is a must for this event. You can also print your own. The program includes a performance schedule and a map.

I must share or I will bust at the seams! “The Big City Small World Bakery has the very best vegan baked goods in Ann Arbor. I love their vegan ding dong cake. OMG!” ok, I‘m done….

While plotting our strategy for the event we were entertained by these performers who I couldn’t find on the schedule. 🙂 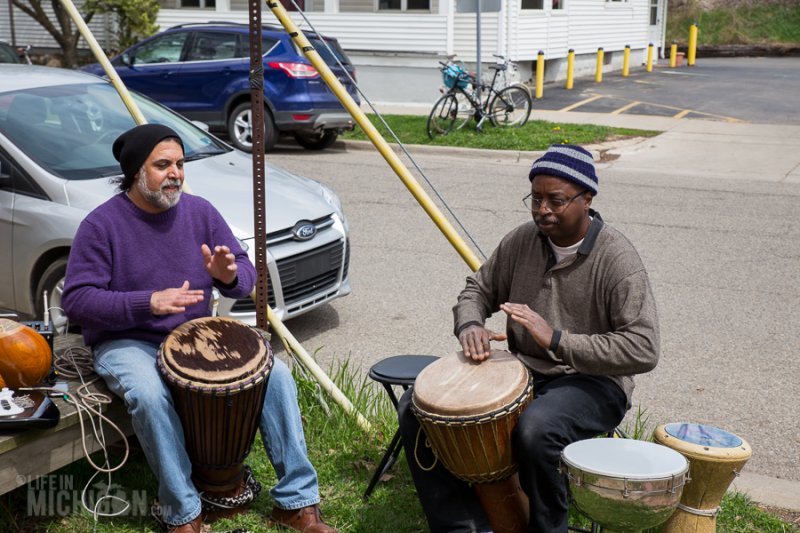 We had a plan, but it flew out the window almost immediately. After the first 15 minutes we just followed “the  sound of music”. I know it’s a bad joke, but this is my blog! So there!

We couldn’t possibly watch all the performances. We caught a few of the 80 performers. Our selection was totally happenstance! And there are many more pictures in our gallery!

“Corndaddy’s music harkens back to the glory days of country rock through filters of power pop, bluegrass and British Invasion bombast.”  They drew a large and loyal crowd.  You can catch them around town and from time to time up at Wolverine Brewing in Ann Arbor.  Corndaddy’s music is sort of like comfort food.  It fills you up and makes you smile! 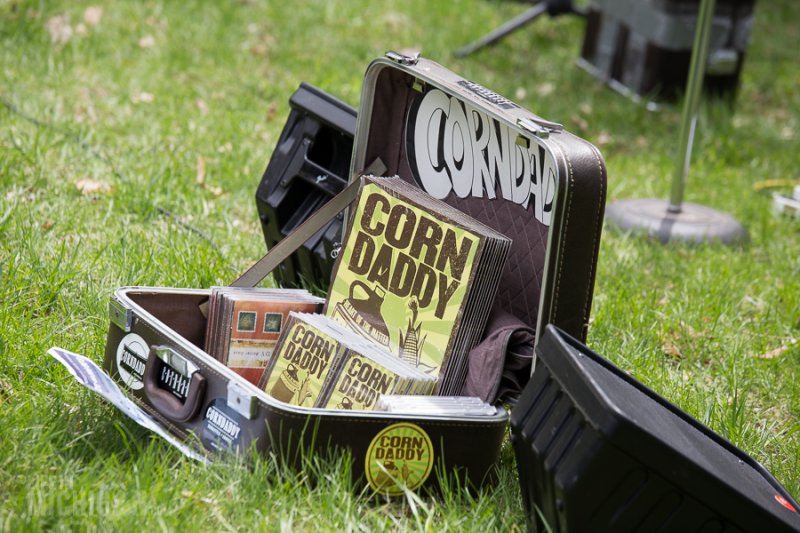 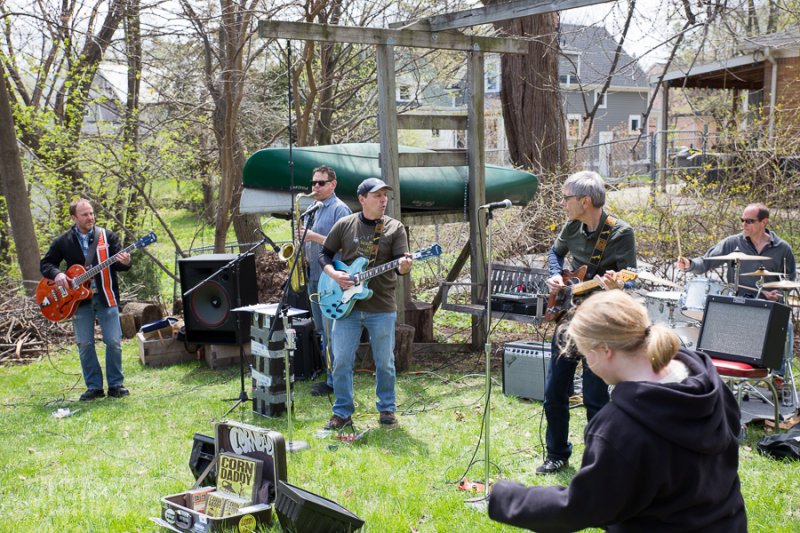 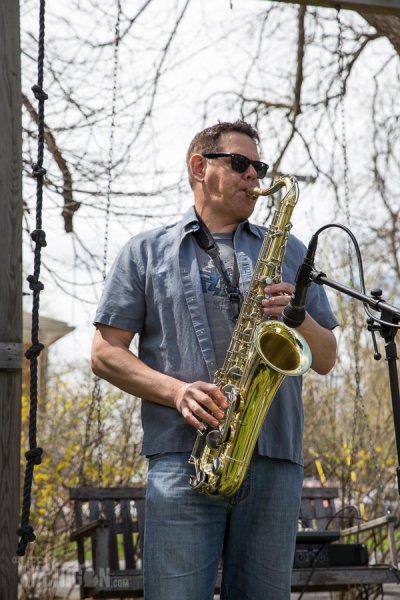 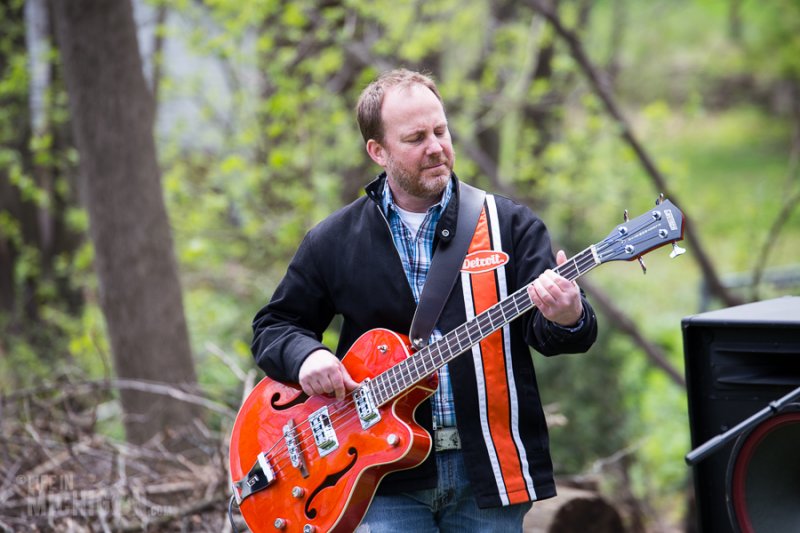 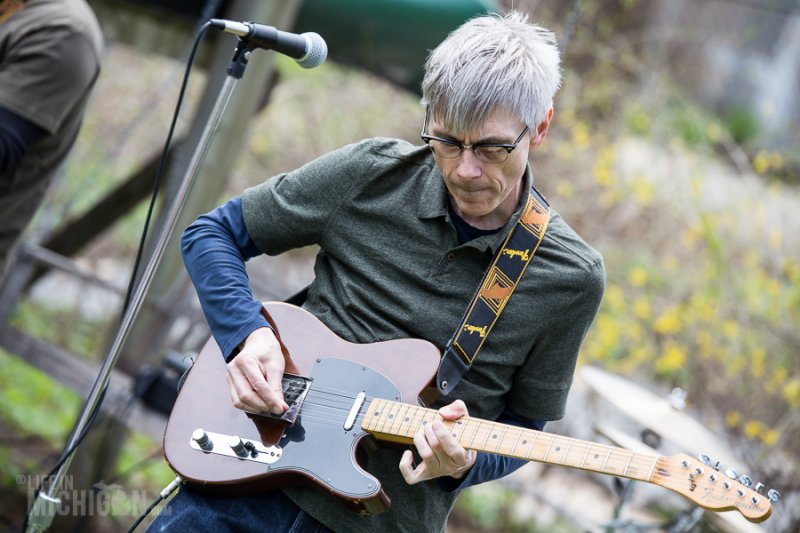 “Music with a raw power that mirrors the rubble of the same Motor City streets that laid the groundwork for some of Rock N’ Roll’s most acclaimed artists. A sound of legends who’ve walked before, with a twist of the new. This is a five-piece indie rock band with high energy vocals, greasy guitar licks and a rhythm section that aims to get your foot tapping and your hands clapping before you know it. Combined with soulful songwriting you get a genre-busting rock n’ roll sound.”

We heard Captain Ivory before we saw them. I think Chuck was running to see them. He was immediately in love and bought their CD.  They are rock and all that is great about rock music.  You want to dance, shake your hips, yell, and roll with the steady stream of grooves these guys crank out.  Chuck loved the guitar playing the most, but that could be because he loves guitars. 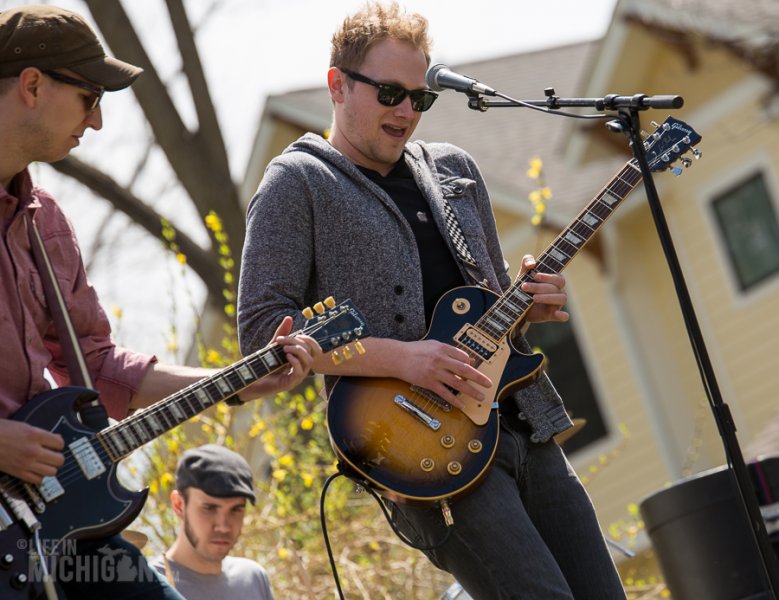 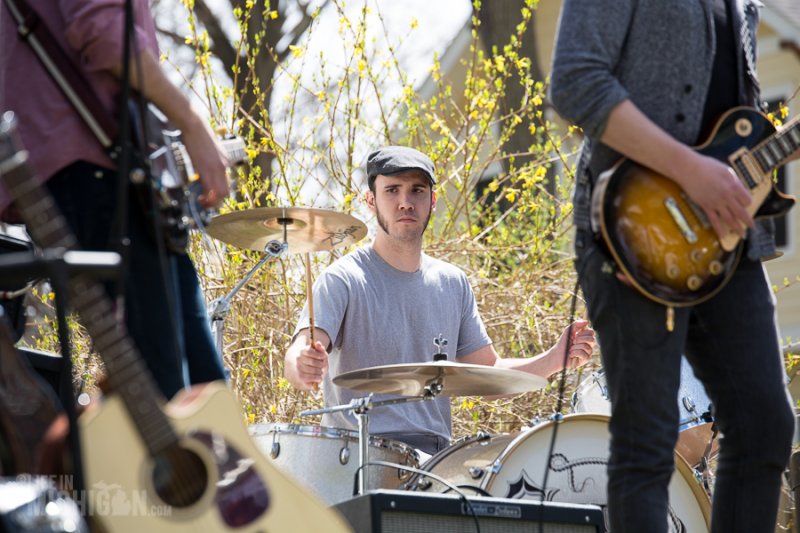 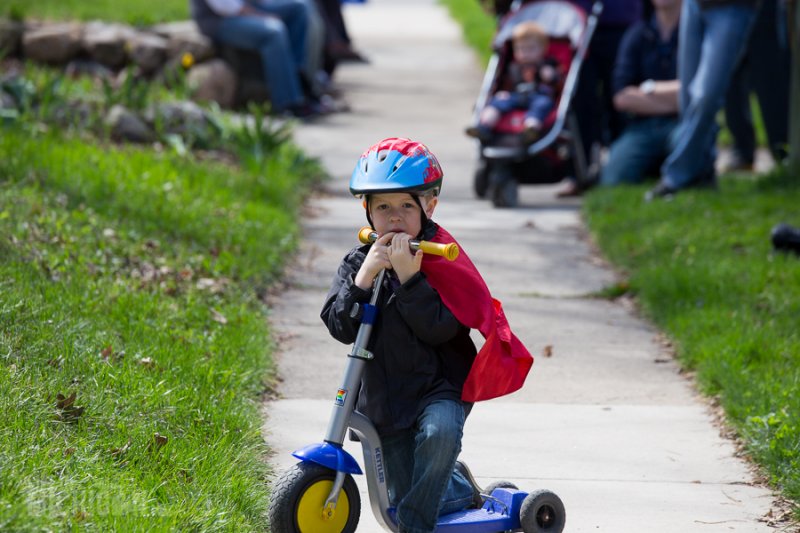 “Currently touring across Michigan, The Blue Effect focuses on rock, blues, funk, and soul, with some jazz thrown into the mix. Their sound reflects the members’ diverse taste in music. They aim to get your feet moving with both original music as and other tunes by some of the greats. Based in Lansing, the band features lead singer Sonya Major who hails from Water Hill. The band is very pleased to be returning to the festival for the 2nd year in a row.”

Blue Effect drew us in, even before we knew what was happening.  Maybe that is the “Effect” kicking in?  They were truly exceptional musicians and played with a boatload of heart and soul.  The vocalist was stellar and had a wonderful timbre. 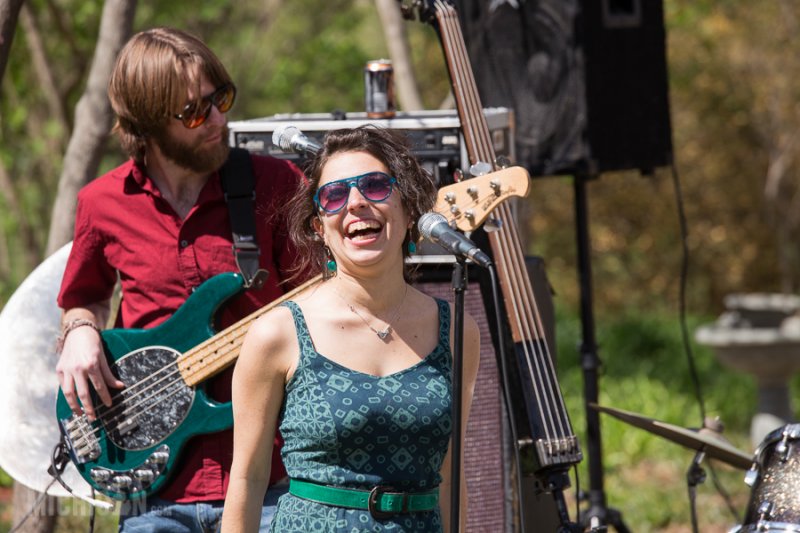 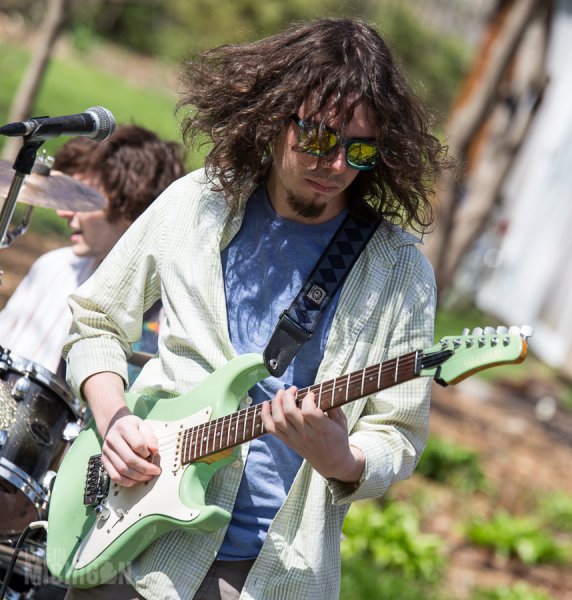 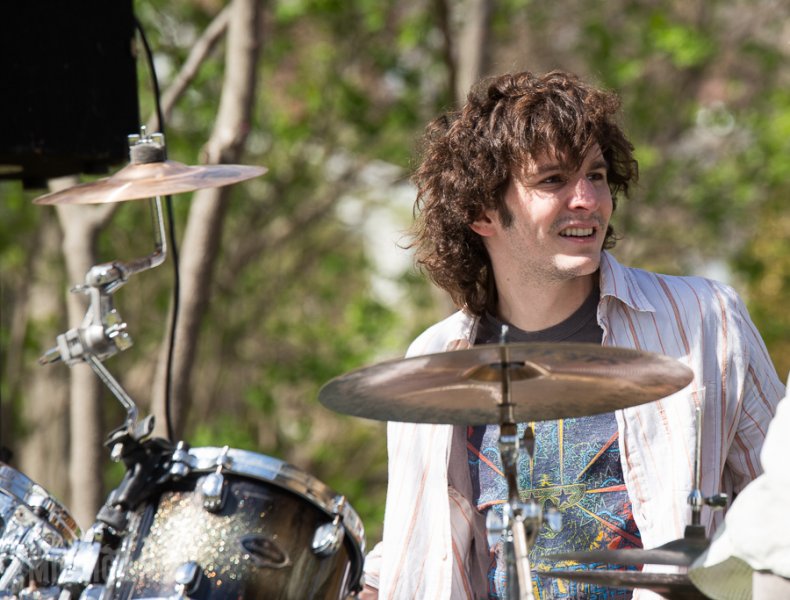 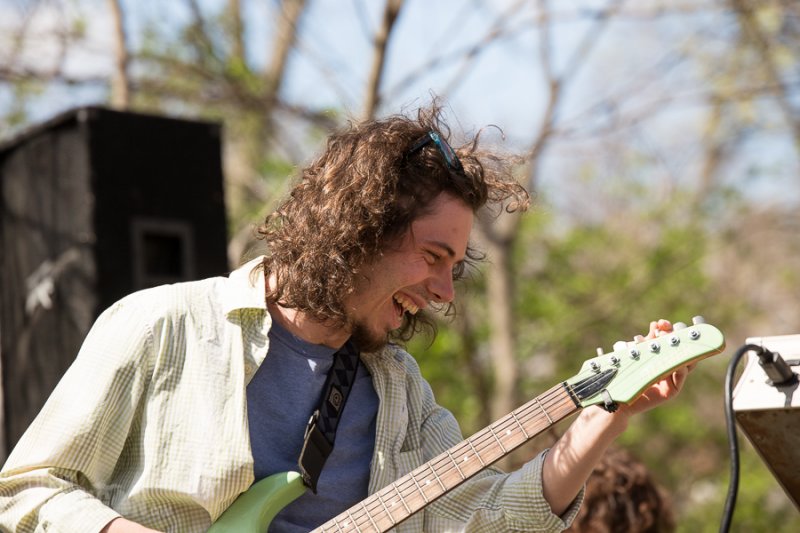 Look here!  Even this dog was under the spell of the Blue Effect! 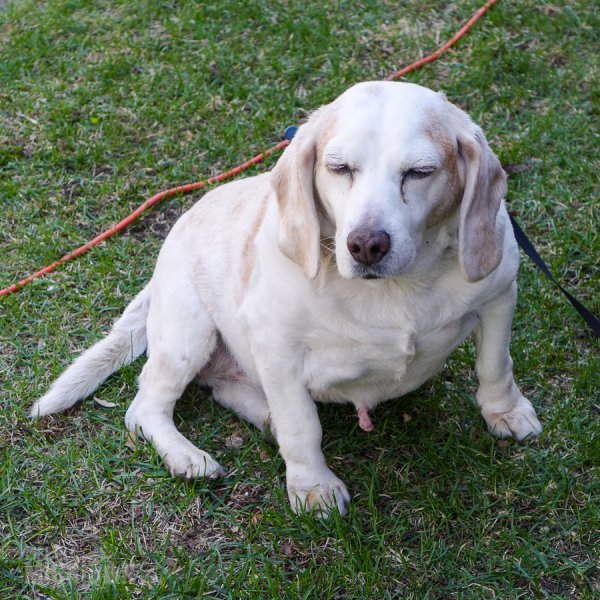 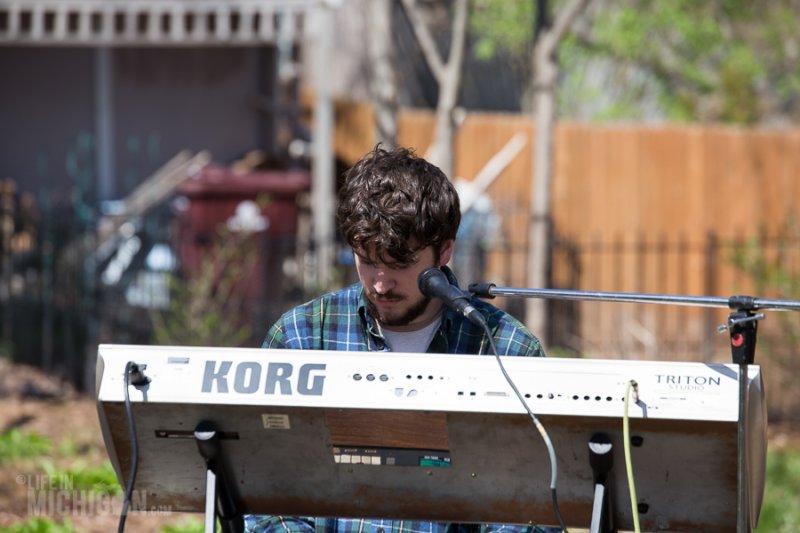 “Traditional  Irish songs along with rockabilly, bluegrass, novelty songs and originals.  Kevin Devine on guitar, accordion, piano, whistles and vocals, Jerry Hancock on bass guitar, Laura Oeschger on piano, mandolin and vocals, and Brent Oeschger playing drums.”  This is what is so cool about this festival.  You can have a band setup in the yard or you’ll have some friends getting together on the porch and jamming. 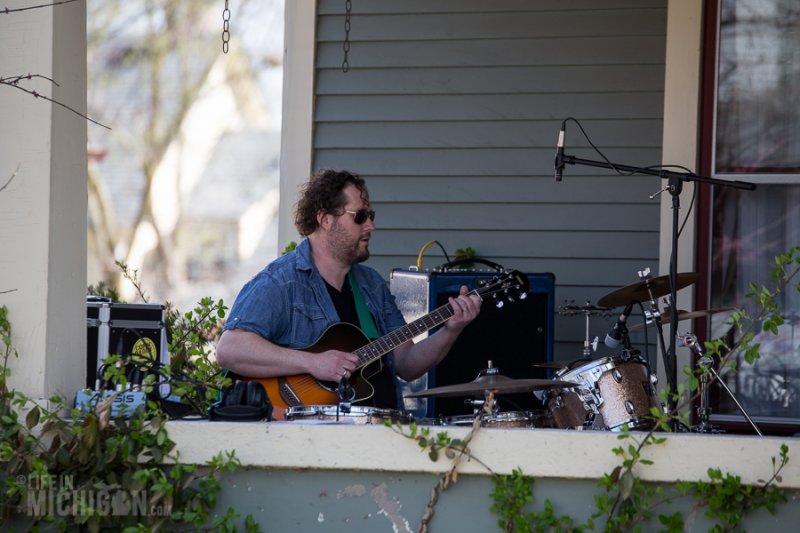 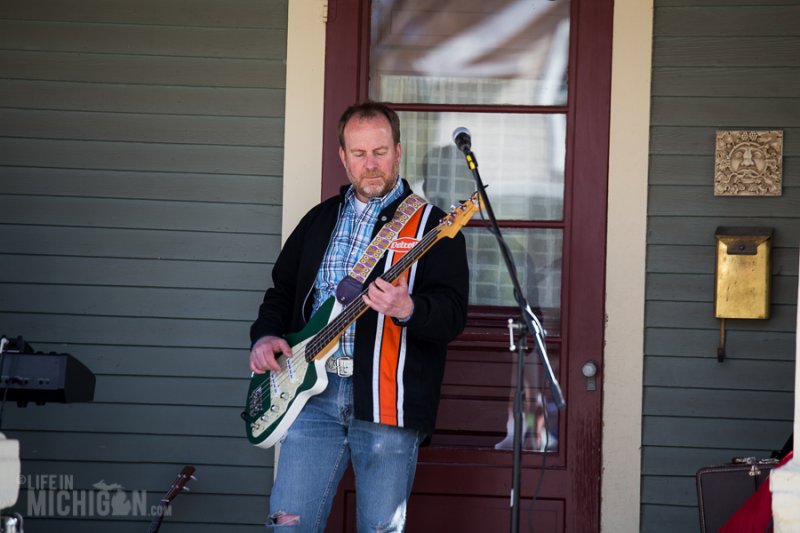 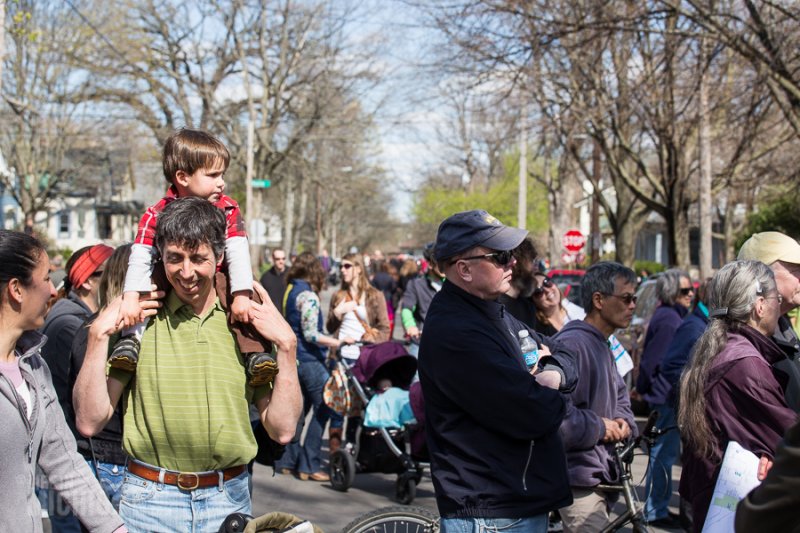 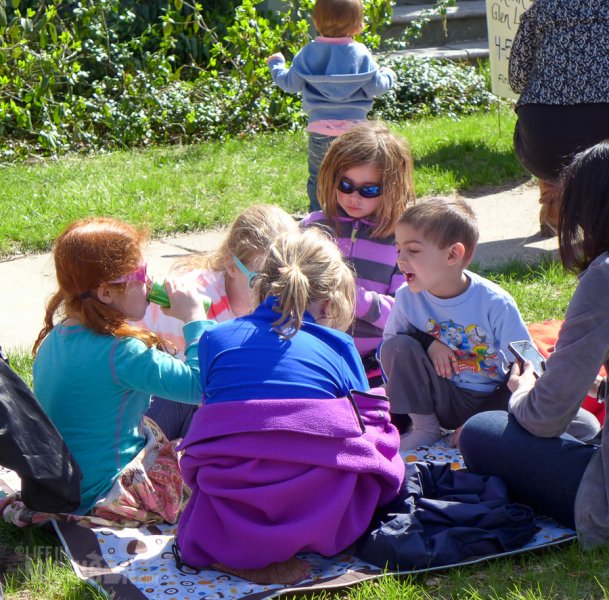 “Shiphead returns. This year the group is welcoming passersby to step up to the mic and belt out Ramones tunes. Shiphead will offer a menu of about a dozen Ramones songs. This rock band will back up any singer who wishes to sing for the crowd. Think of it as live karaoke.”

RAMONES KARAOKE!  SERIOUSLY!  YES!  How fun is that?  You want to jam some Ramones, well step on up!  This was just pure fun and the crowd loved it!  One guy wanted to play drums, but the band said “um…how about you sing?”  Chuck recognized the guitar play in Shiphead as the same guy with bunny ears at Fuzz Fest (the band was Scissor Now!) 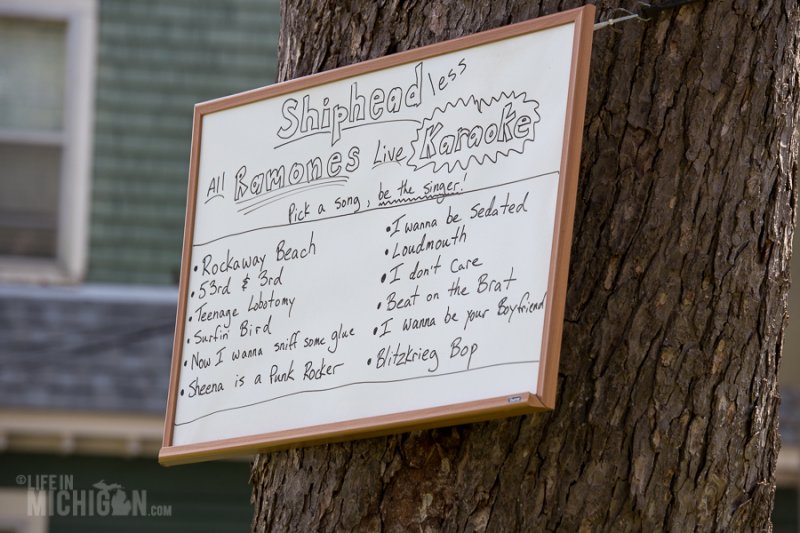 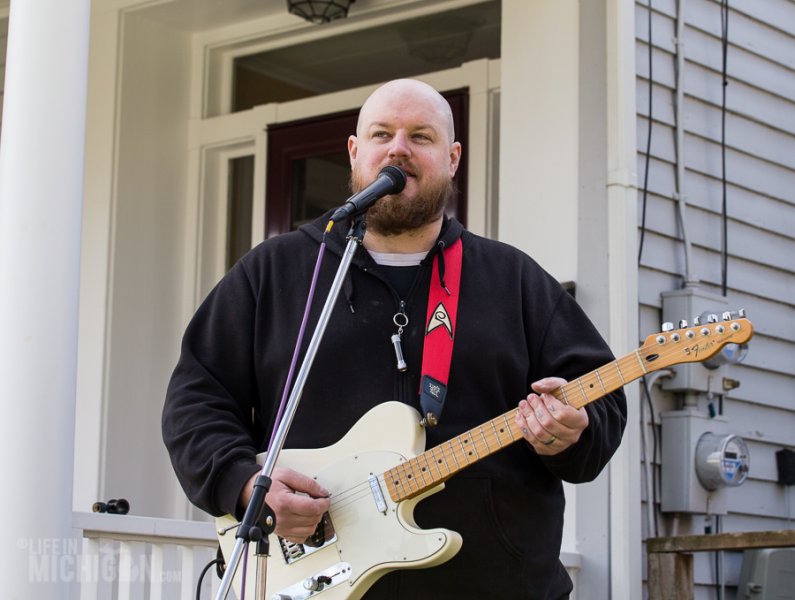 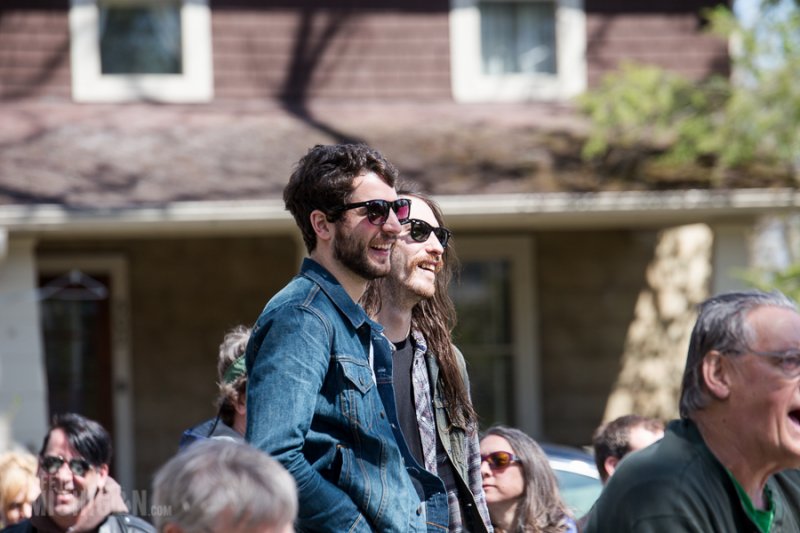 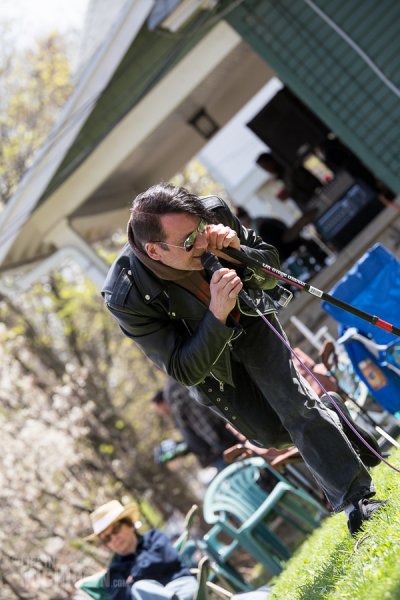 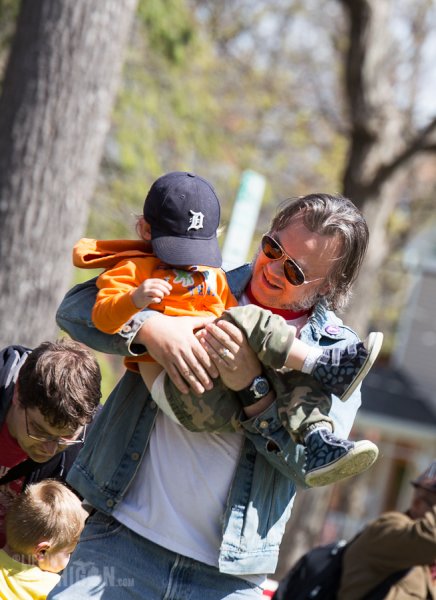 “A cutting edge saxophone sextet, the frogs perform jazz, classical, pop, and contemporary music. Recent performance highlights include The Kennedy Center for the Performing Arts, the North American Saxophone Alliance Chamber Concert, Detroit Public Television’s Detroit Performs Series, Oakland University, the University of Michigan’s Collage Concert at Hill Auditorium, and an appearance at “The Big House”  for Commencement 2013.” Who knew you’d find the Moanin Frogs on Water Hill! The Moanin Frogs drew a big crowd with their old time tunes.  It was definitely a change of pace for us.  Chuck got an image of the Family Guy for some reason.  He’s kinda silly like that though. 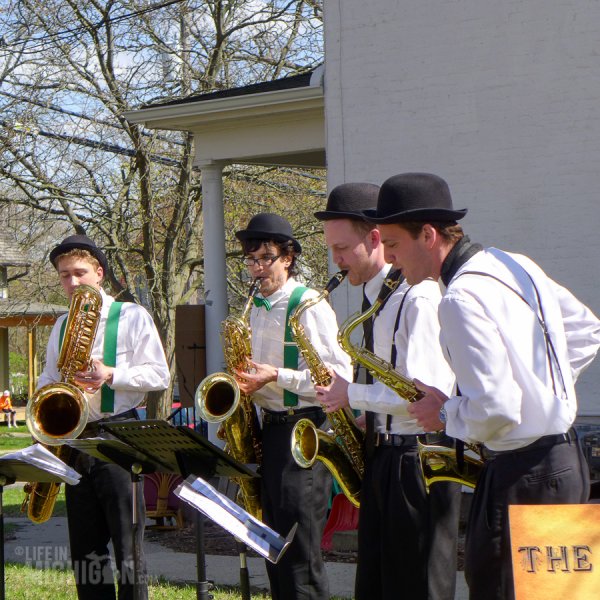 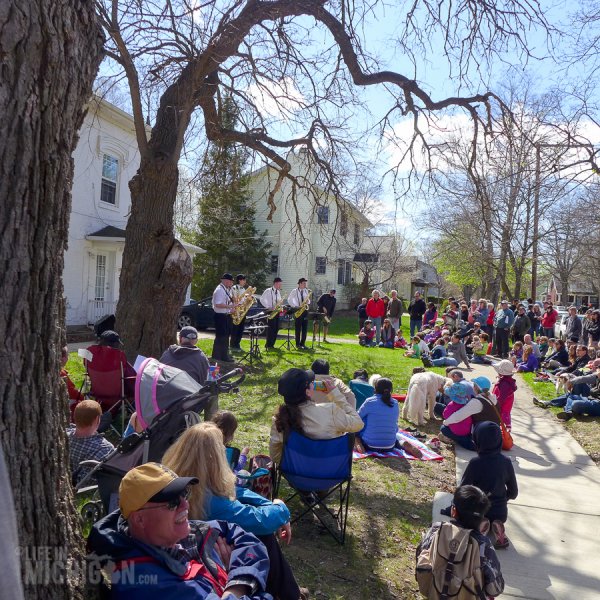 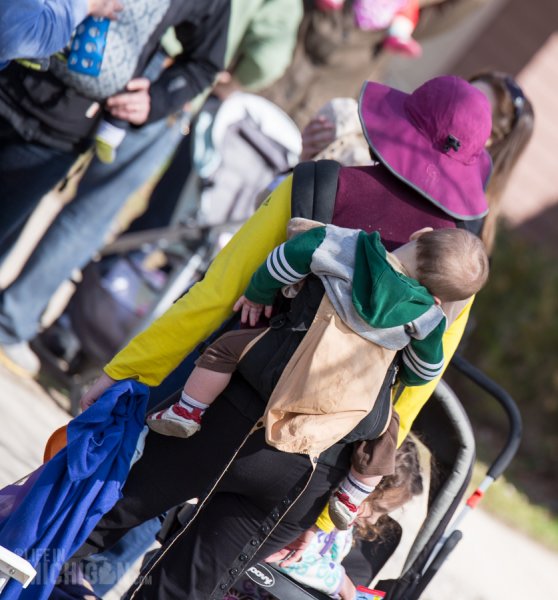 We had to head home and didn’t get to check out all of Abigail and Katie’s songs, but we loved what we heard.  Abigail has a great voice and her songs had us thinking of our friends from Nervous But Excited.  That dynamic and engaging style of folk with a bit of an edge. 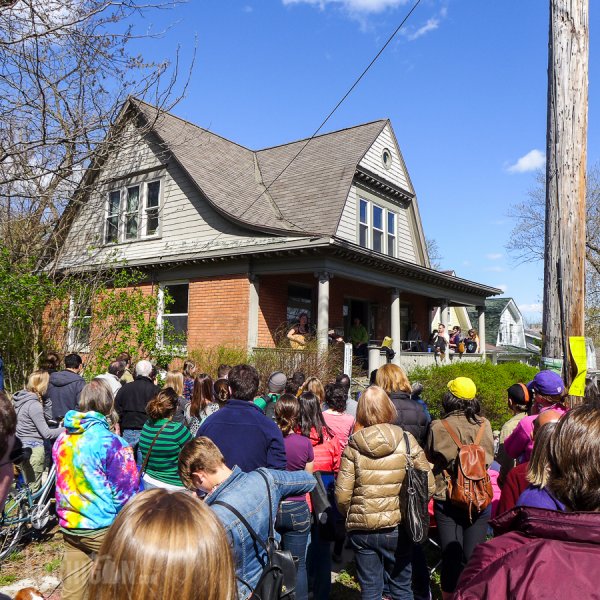 Oh, we more photos in our gallery!