The Black Crowes, Tedeschi Trucks Band, and London Souls…Rock out! 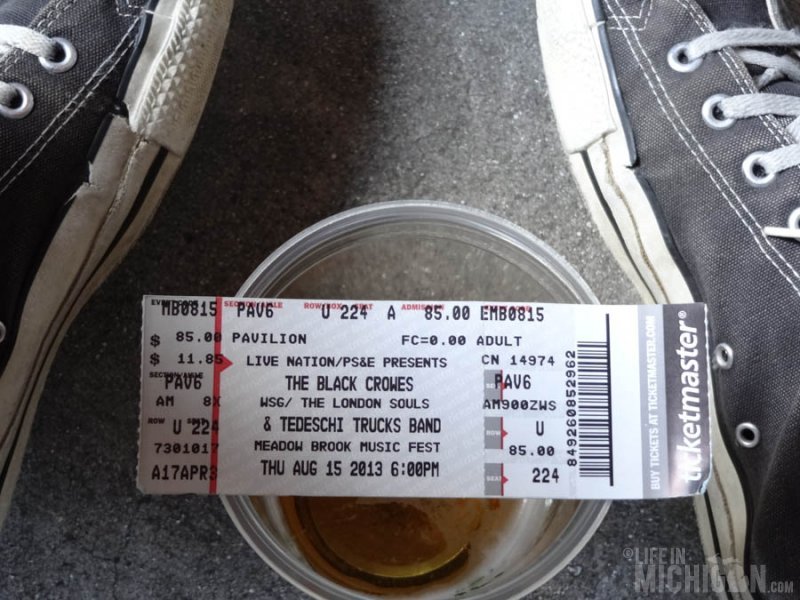 Have I mentioned how much I love music?  🙂  I’m sure I have!  While a metalhead at heart, I also have a deep love for what I’m going to call blues rock.  Music in the vein of Hendrix, Robin Trower, Cream, or Led Zeppelin.  I also like my rock and blues southern fried.  You know that sound of the Allman Brothers, Lynyrd Skynyrd, or Derek and The Dominos!  The soul of that music is alive and well today in the hands of the Black Crowes, Tedeschi Trucks Band, and London Souls.  As soon as I heard that Tedeschi Trucks and The Black Crowes were touring together and coming to a great venue like Meadow Brook Music Festival, I was on it!

I also was dying to try out my new camera that I picked up on the advise of Thom Seling (this guy is a great photographer!)  Even being back 25 rows, I think I was able to get some good shots to share with you. 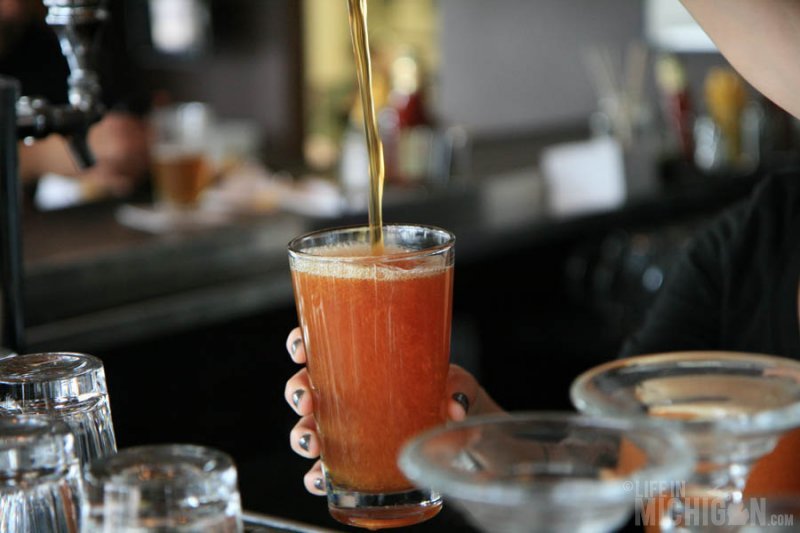 We dropped into Black Lotus Brewery in Clawson for a pre-show dinner and some quality beer.  We loved the Thai-PA when we tried it at the Michigan Brewers Guild Summer Beer Fest and figured since we were in the area that we should check out the pub.   It was definitely worth the visit! 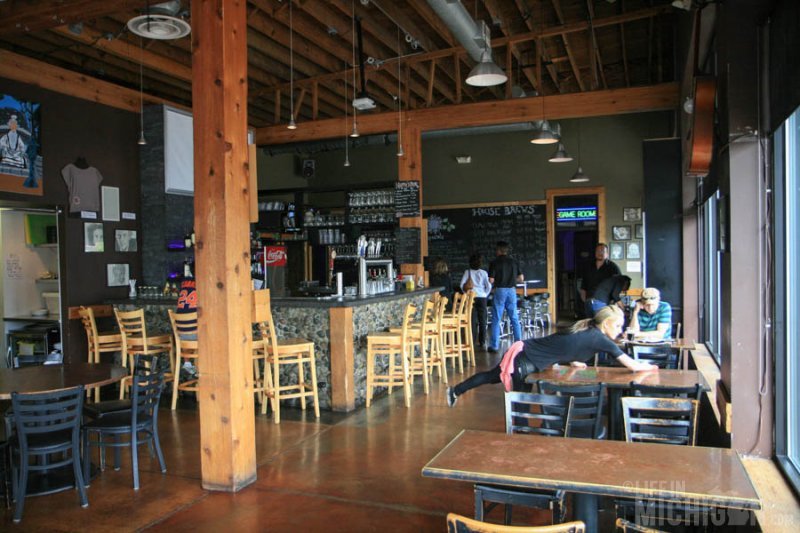 The pub is open, bright, and inviting.  We had the house made black bean burgers and sampled the Thai-PA and the Black Bottom oatmeal stout.  The food was really good and the beer was great!  The Thai-PA was just as good as I remembered from the fest.  The basil kicks ass!  The oatmeal stout was damn nice too! 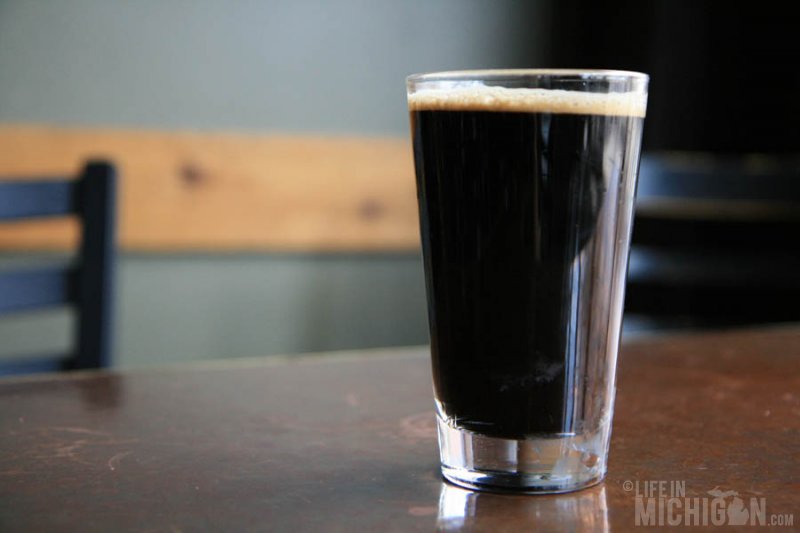 With some great beer and food in our bellies, we made our way over to Meadow Brook.  If you haven’t been, Meadow Brook is like a scaled down Pine Knob (yeah…I know its called DTE Music, but I still call it the Knob).   A covered pavilion and surrounding lawn area to sprawl out.  We made out way to our seats in the pavilion just as the London Souls started their set. 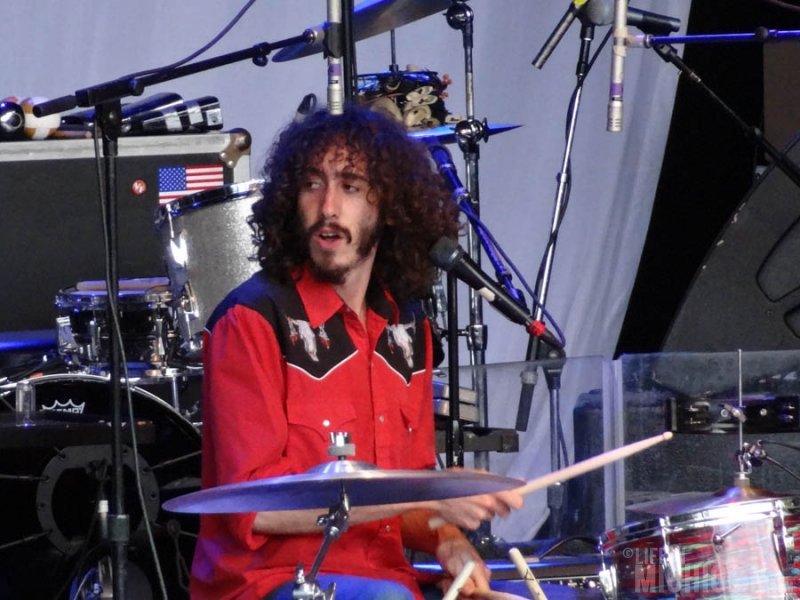 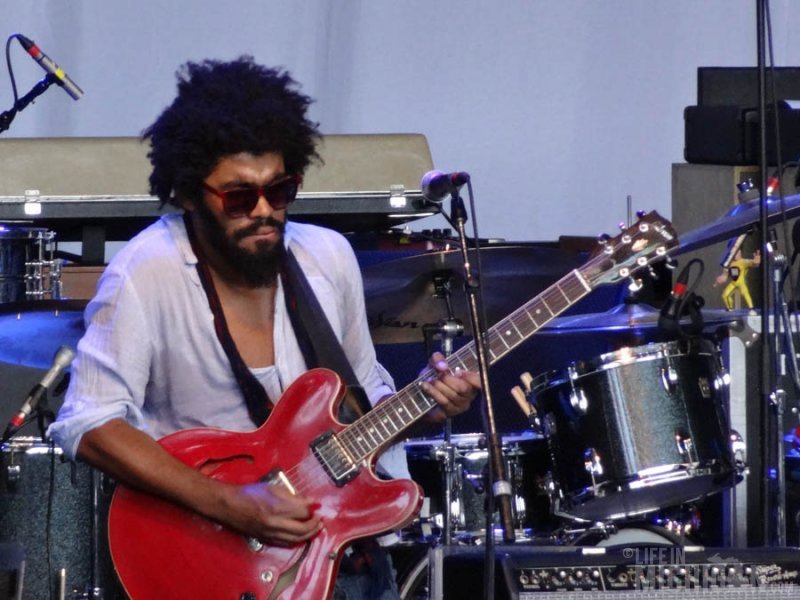 I’d honestly never heard one of their tunes before the show which is unusual for me.  I normally make it a point to check out a couple tunes beforehand.  I was really impressed!  These guys jammed!  The vocal harmonies between guitarist/vocalist Tash Neal and drummer/vocalist Chris St. Hilaire added depth to the music.  I loved the gritty tone of Tash’s Gibson and that Fender Super reverb amp!   I didn’t know their tunes, but as soon as I got home I bought their album.  Favorites at the show were “She’s So Mad”, “The Sound”, and “I Think I Like It”.  You can’t go wrong checking out this band! 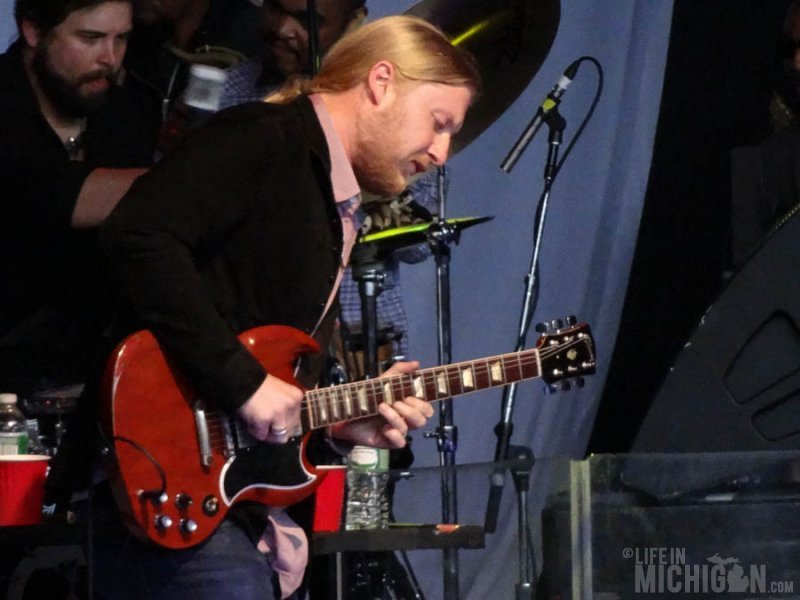 I first saw Derek Trucks and Susan Tedeschi together at Eric Clapton’s Crossroads Guitar festival back in 2007.  They blew me a way with a cover of “Anyday” by Derek and The Dominos.  I was definitely looking forward to seeing them again.  The Tedeschi Trucks band is a complete assemble of horns, guitars, percussion (two drummers!), keyboards, and vocals.  Everyone in this band is top notch and they all look like they are having a great time playing together. 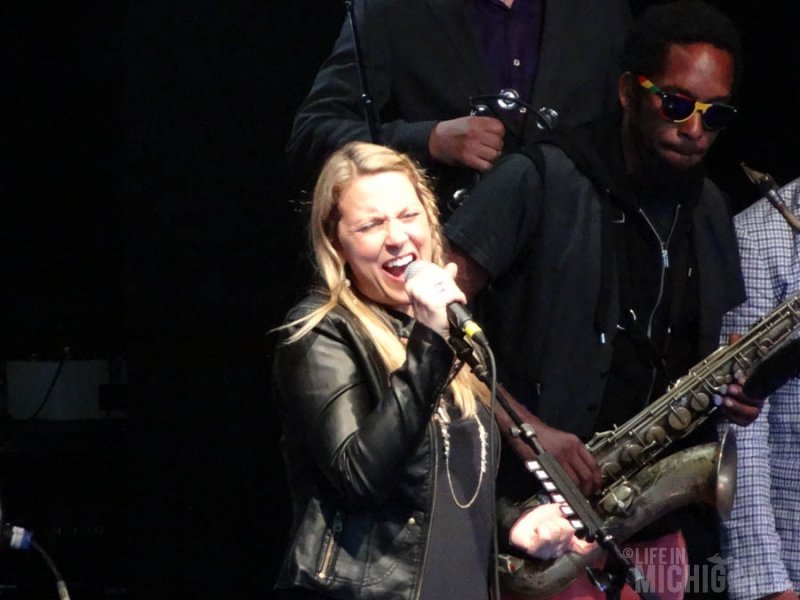 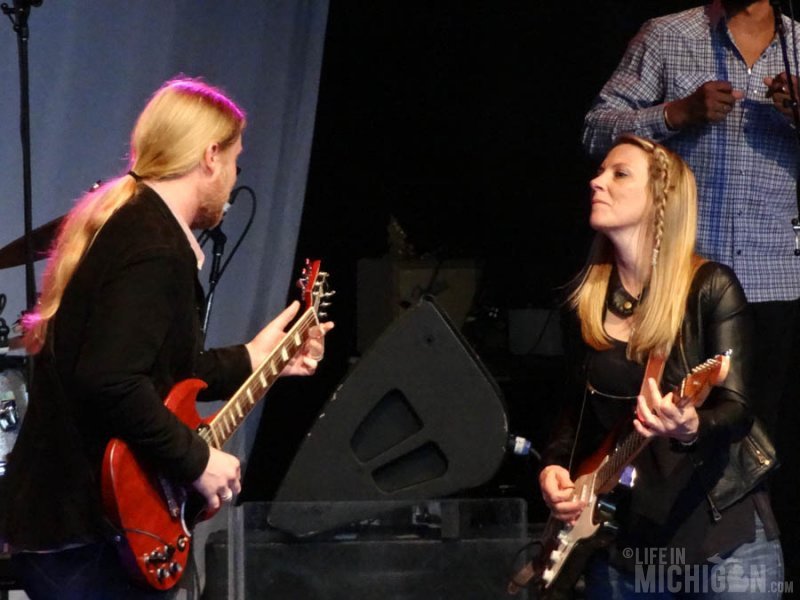 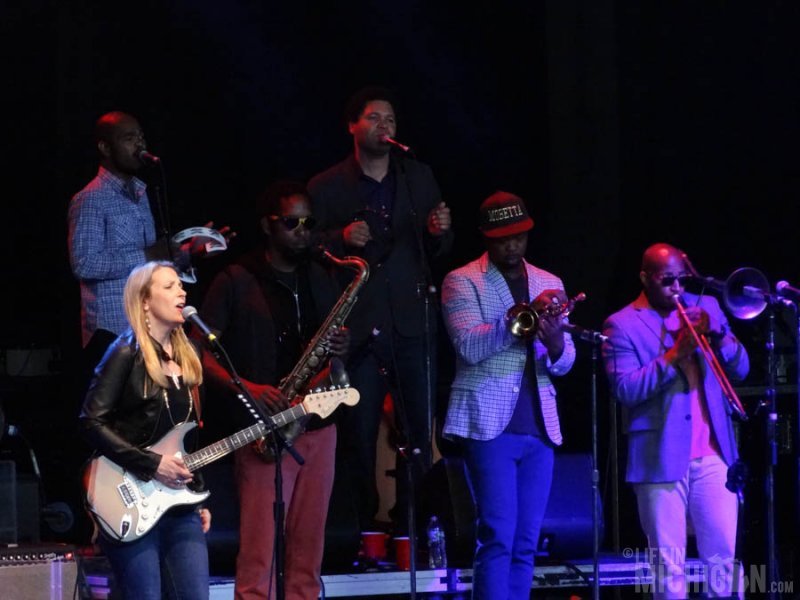 Most of their set contained new tunes from “Made Up Mind”.  I love the R&B feel of “Misunderstood” and “Part of Me”.  Those tunes are just bursting with goodness.  An added bonus was Rich Robinson coming out to play guitar with Derek on “Midnight in Harlem”.  Another fantastic song to hear live! 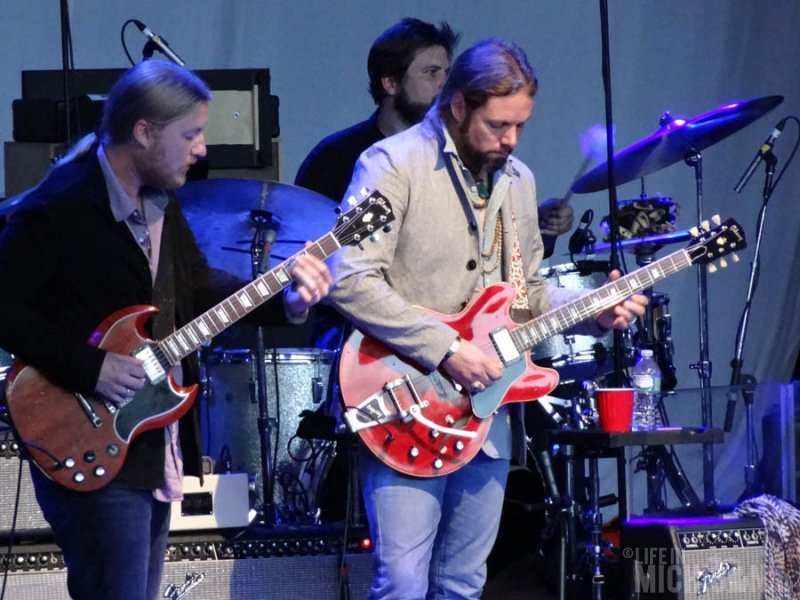 Tedeschi Trucks ended their set with a cover of the Beatles “I Got A Feeling” and then their own tune, “The Storm”.  It was a huge jam with the guys from London Souls (Tash Neal, and Chris St. Hilaire) and The Black Crowes (Steve Gorman, Adam McDougall, Chris Robinson).  Man, they all looked like they were just having a ton of fun! 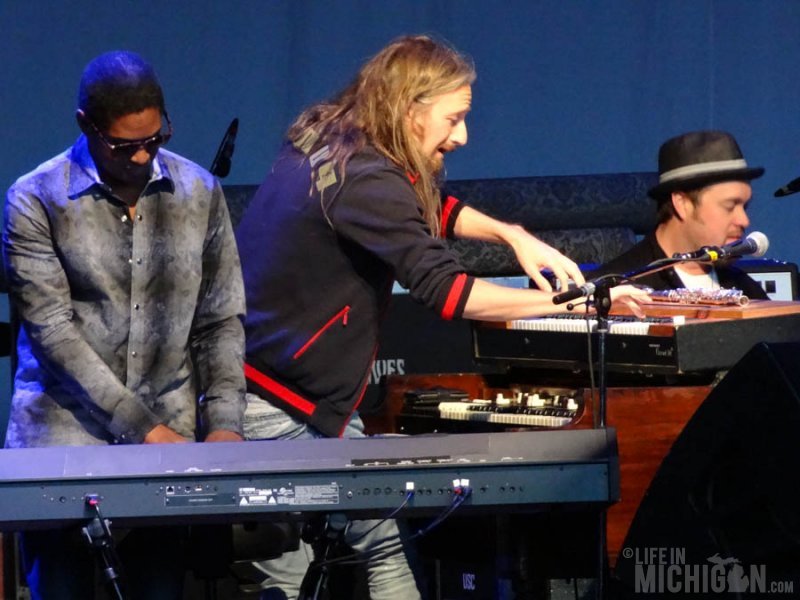 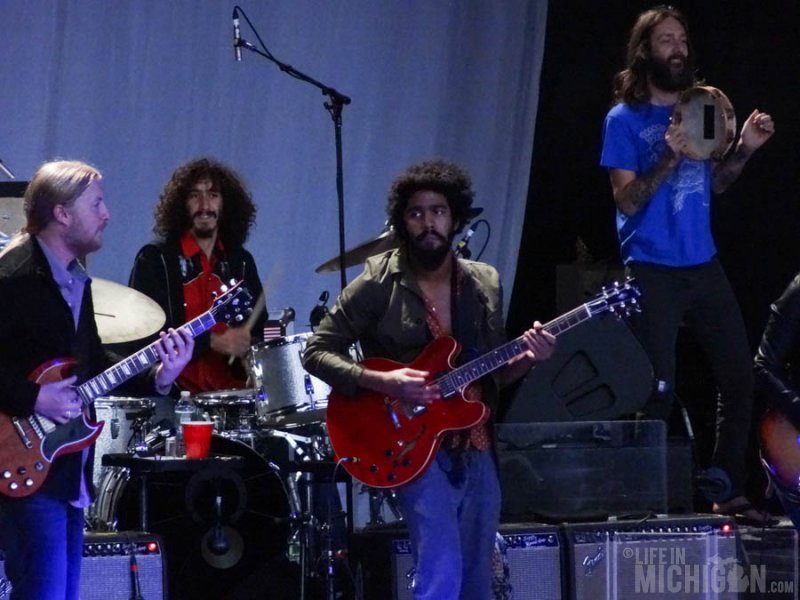 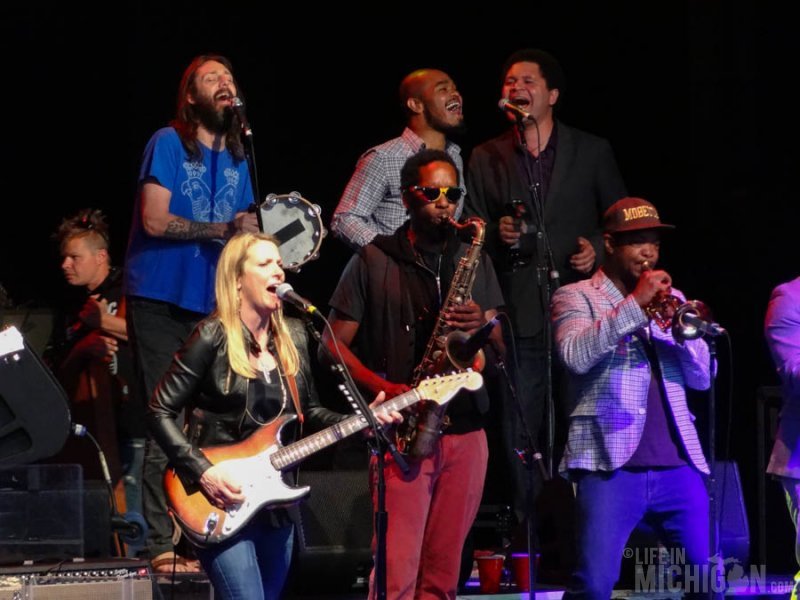 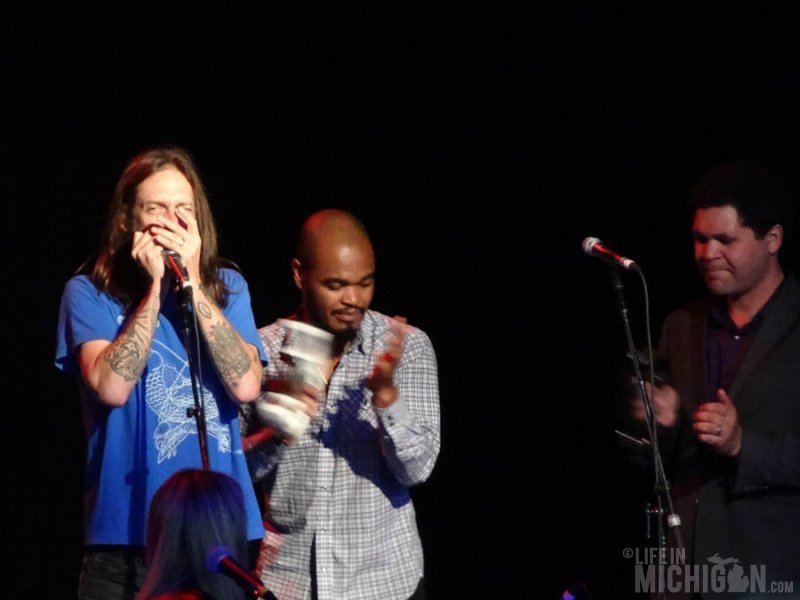 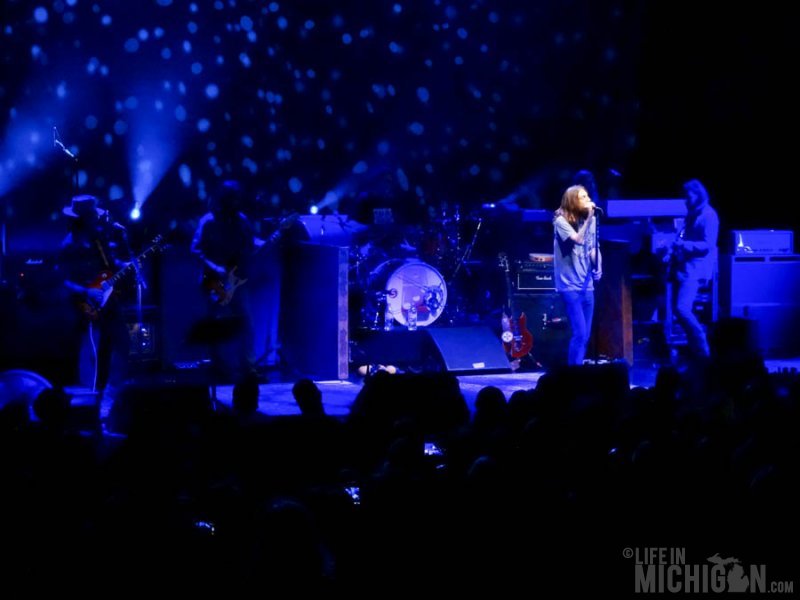 After a relatively short set change, the Black Crowes took the stage.  This was my first time seeing them live (yeah I know…what the hell?!?).  Their set started out with “Under A Mountain” and then rolled into “Soul Singing”.  I couldn’t ask for more! 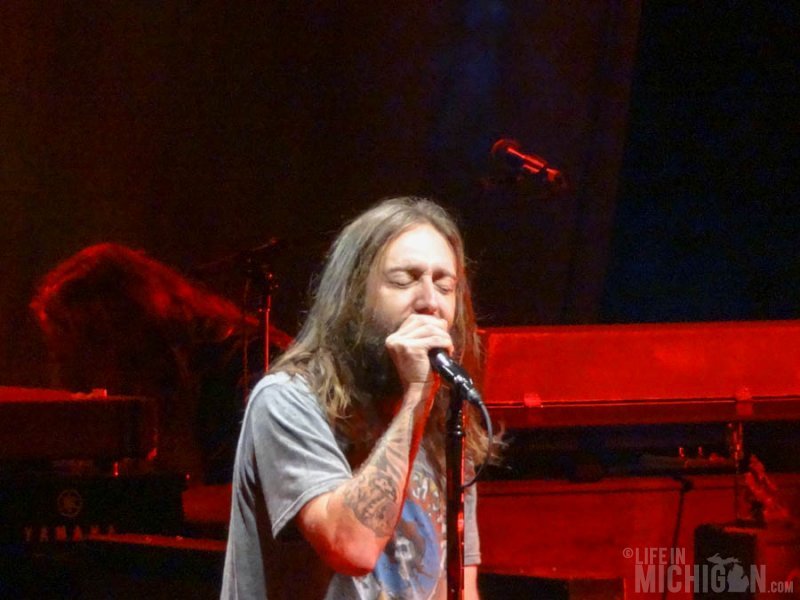 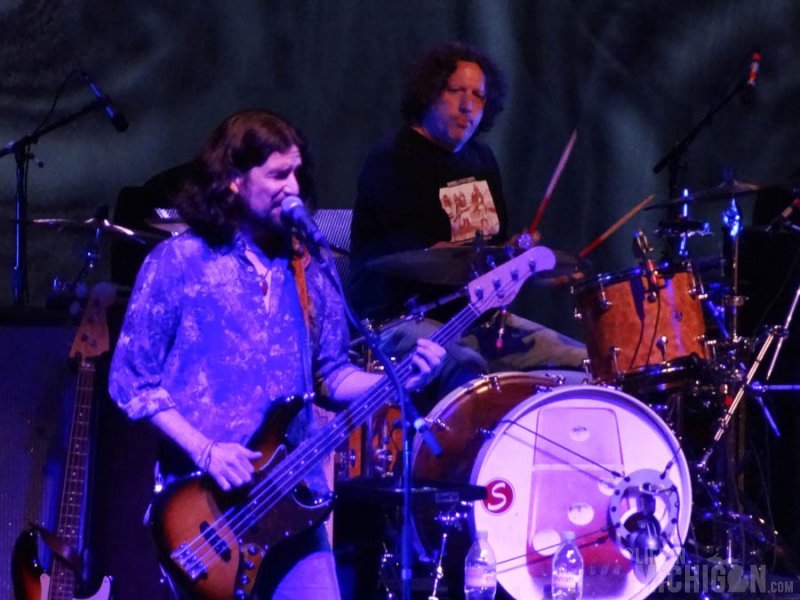 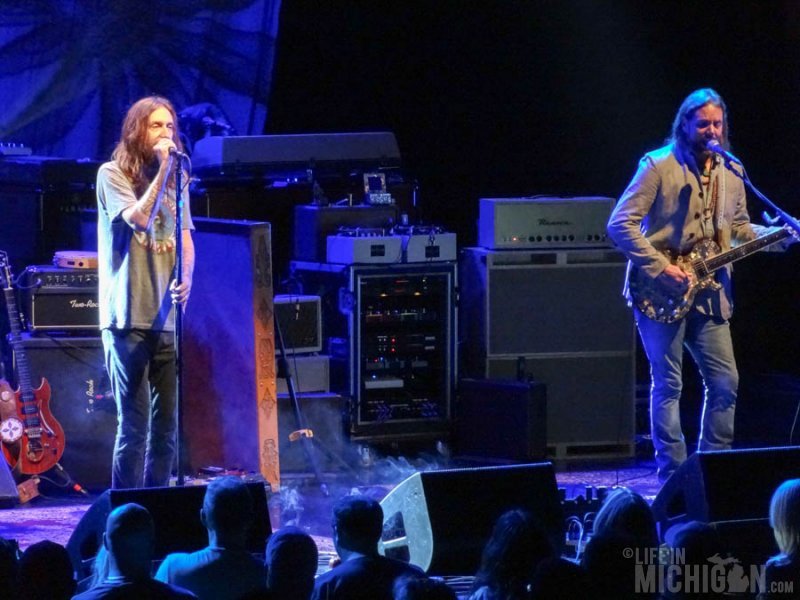 “Wiser Times” is my favorite Black Crowes tune and live this song is extraordinary.  The guitar playing of Jackie Greene was top notch.  I’d seen him open up for Govt Mule the last time they were at the Filmore in Detroit.  The man can flat out play!  Damn! 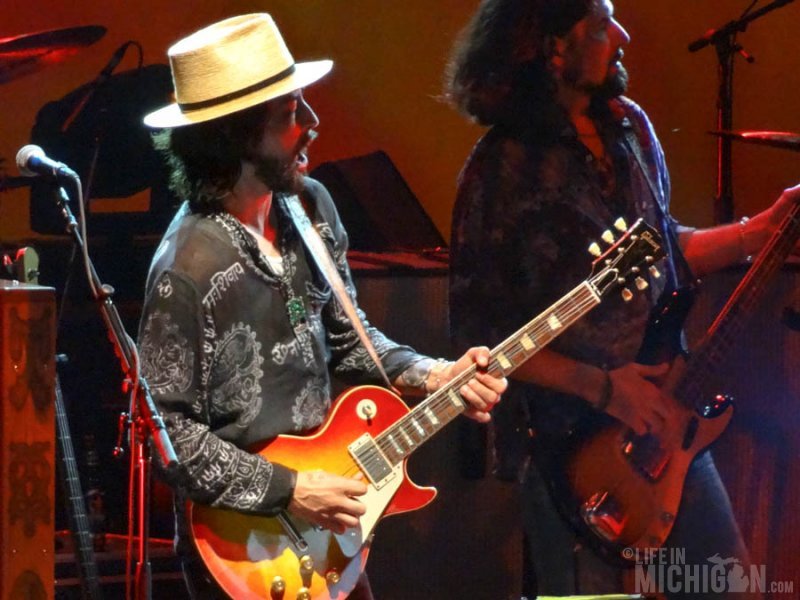 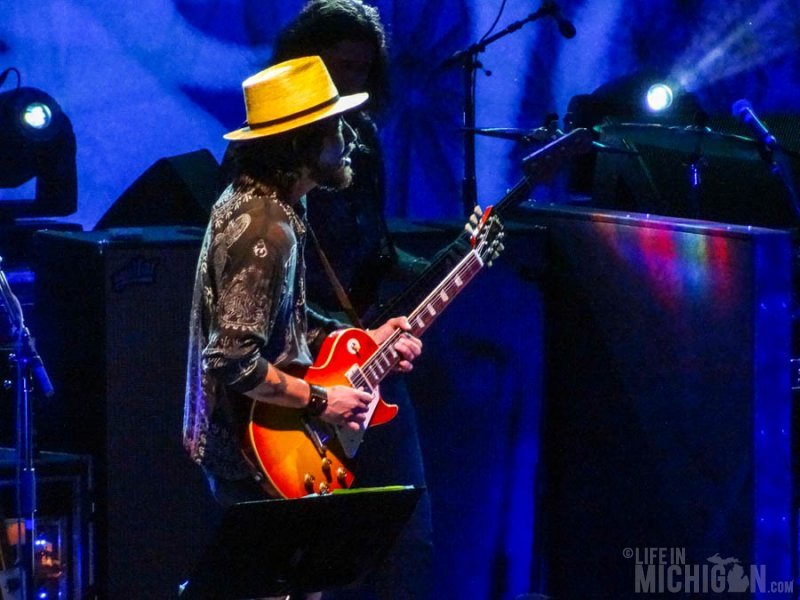 The Black Crowes set ended with “Thorn In My Pride” (yet another awesome tune!) and “She Talks To Angels”. 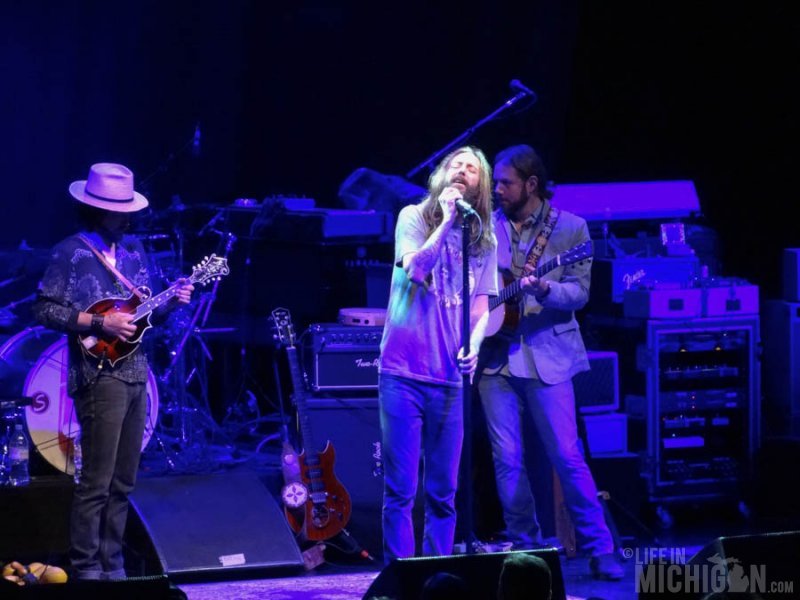 A brief break to setup equipment and it was encore time with an all band jam extravaganza!   The train started rolling with a Clapton cover “Don’t Know Why” and then into what has quickly become one of my most favorite tunes, “Space Captain” by Joe Cocker.  Anyone can sing along “Whooo!!!….Ahhhhhhh”! 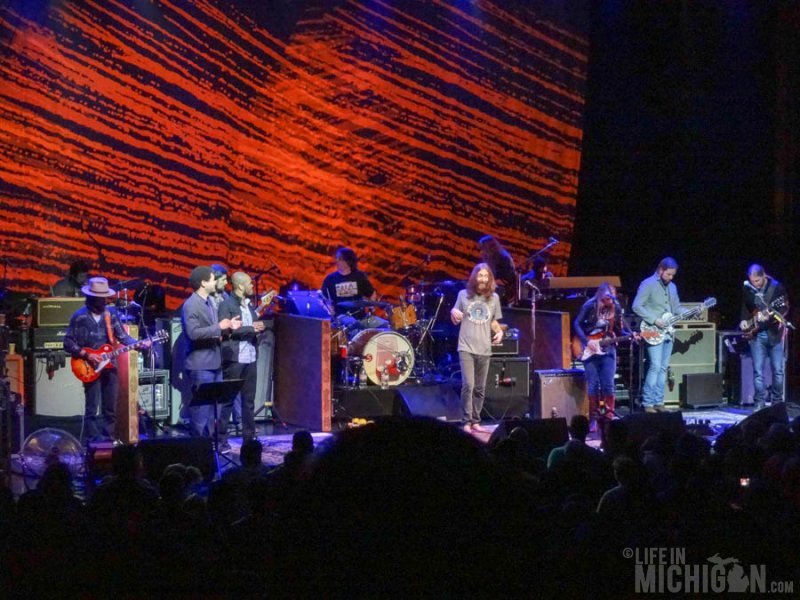 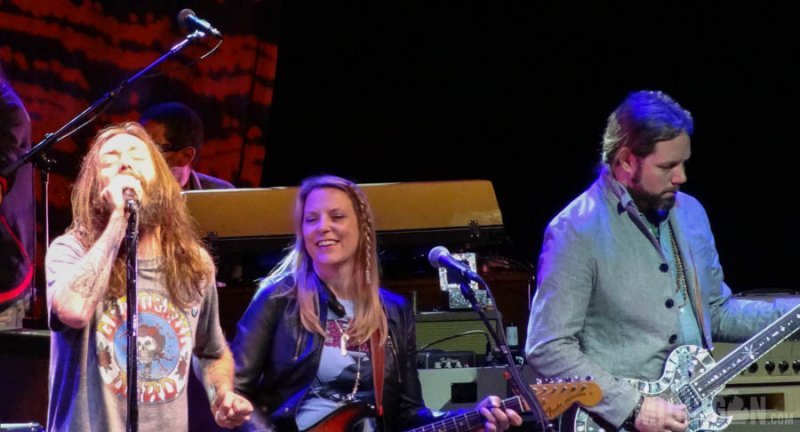 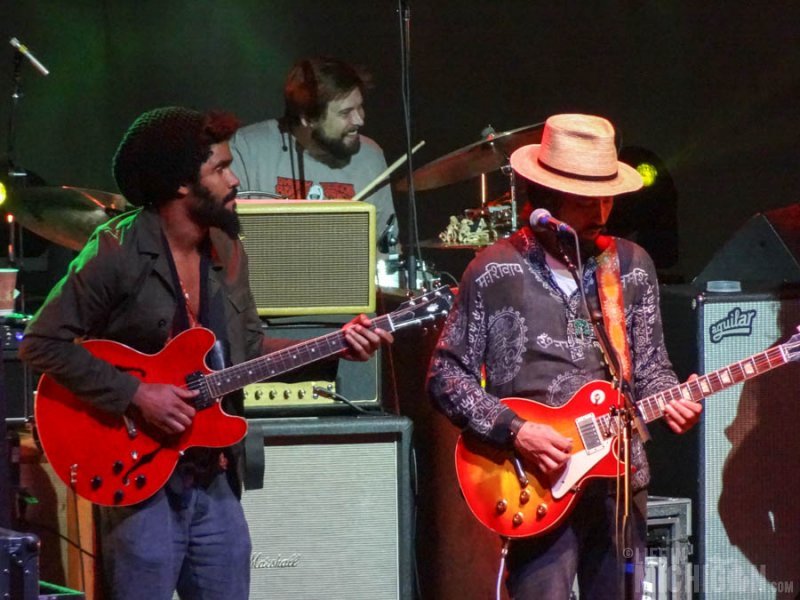 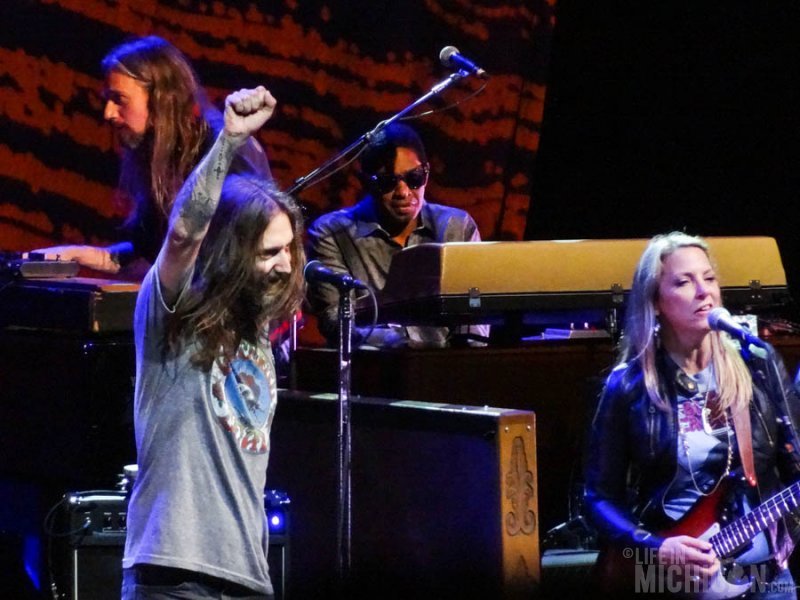 The encore ended with Sly and The Family Stone’s “I Want To Take You Higher”.  A fantastic way to cap off a fantastic show!  If you are looking to see even more pictures from the show, we of course have them in our gallery.